Block Busting in the Northern Berkshires

We had our final organized block busting trip of the season to the northern Berkshires this past weekend traipsing through parts of Monroe, Florida and Savoy out along Rt. 2 before the hairpin turn drops you down into North Adams. Some of the usual suspects for this year's block busting joined us again, including Steve Sutton, Wendy Howes, Alan Rawle, Pat White and Bill Rasku (missing from this photo since he was still atlasing). 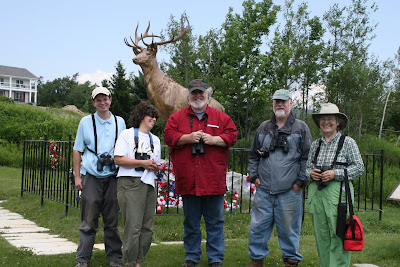 Our meeting place was Whitcomb Summit -- site of the Golden Stag -- right along Rt. 2 which was the border between two of the sub-territories in the block (North Adams 11). We also completed North Adams 12 which is a 3/4 block (we call them slivers) going right up to the Vermont border. You are close to Mt. Greylock so you get lots of breeding Juncos, breeding Swainson's Thrush and the like. 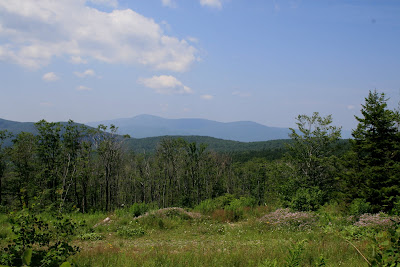 Also lots of breeding activity with parents and newly-fledged birds out gathering food like this White-breasted Nuthatch. 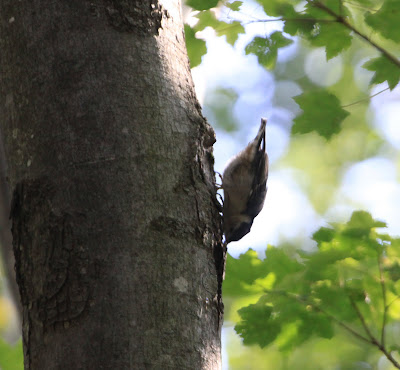 And this immature Black & White Warbler. 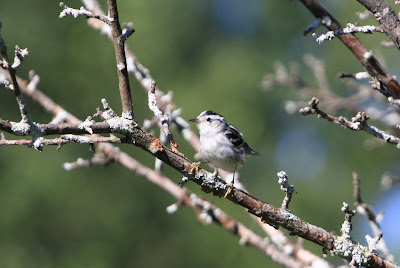 You never know just what you'll come across! This Guinea Fowl was part of a small flock of semi-feral birds near a farm on Oleson Road. We talked with the farmer (Olie Oleson) about two weeks ago and he told us that they had gotten the Guinea Fowl to deal with an earwig problem and within a very short time the earwigs were gone. It seems these birds are great for dealing with any insect problem and that's why many people keep them. Even in the winter they birds roosted up in trees at night and would come to the hen house shelter during the day if the weather was particularly bad. But realize we did not count these birds on the atlas! 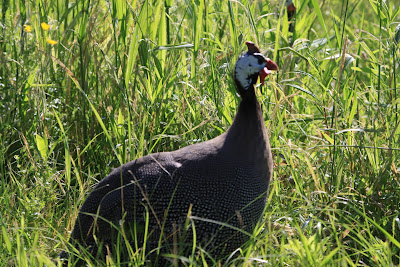 Other signs of breeding behavior that was still very evident including Chipping Sparrows gathering food for birds still on the next -- obviously a second (or maybe third) nesting. 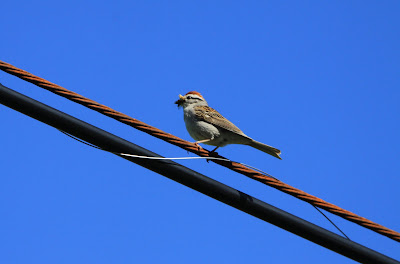 In addition to the newly-fledged Barn Swallows along Oleson Road.... 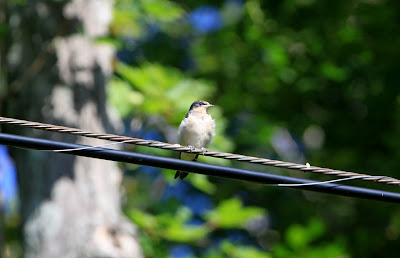 there were still some begging food whenever an adult passed nearby. One of the really exciting finds was a colony of Cliff Swallows along that farm road as well. Steve and Pat were able to see fledglings still being fed by parents there as well. 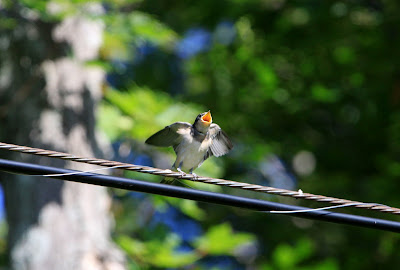 Here's Bill Rasku back from his "lone wolf" block busting in No. Adams 10. This time Wendy and Alan were missing since they took off to grab some lunch in do some afternoon birding in another block very low on numbers. As we compiled data Pat White shared her close encounter with a bear in exactly the same spot where Mark met him two weeks ago....he must love the food along the power lines. 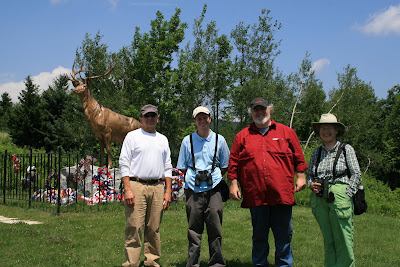 Since we met in the morning and compiled our numbers in early afternoon at Whitcomb Summit, we became quite familiar with the birds around the area. Robins seemed to enjoy using the antlers as a perch, and we had our only Kestral of the morning flying across the open area here as well. BTW, you can read more about the "Elk on the Trail" monument which is dedicated to Elk members who lost their lives in service. I just Googled "elk on the trail Massachusetts" and found a couple of good little histories. 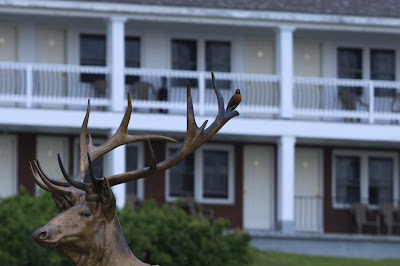 In the partial block (No. Adams 10) going up to the Vermont border, you have a lovely area along Bliss Rd. (off Tilda Hill Rd. from Rt. 2). Unfortunately this area is in the midst of a legally-contested plan to build a 20 turbine wind farm along the ridge. This would be so unfortunate in my opinion. While I'm all for environmentally-sound alternative energy, I just hate to see it at the expense of the environment. It was along this road that we found a beautiful Spring Salamander last year. Can't imagine what the construction vehicles alone would do to the small streams along the road. While we did hear a report from a local that they were going forward, I can't find any recent articles confirming that. 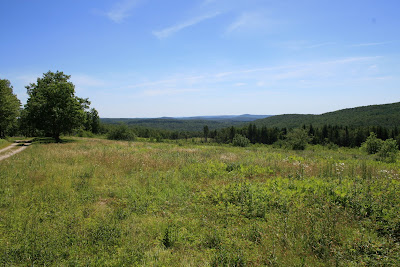 This is the old cemetery at the end of Bliss Road. 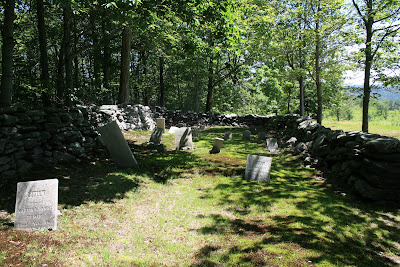 Hermit Thrushes were signing everywhere, and we had two different teams reporting Swainson's Thrush as well! 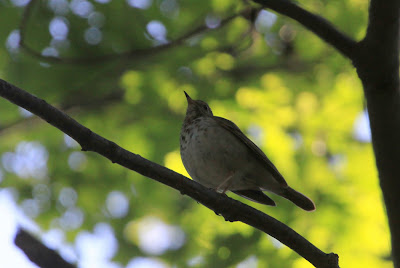 While the block continued into Vermont, we didn't! Although we did pull off and listen for birds. 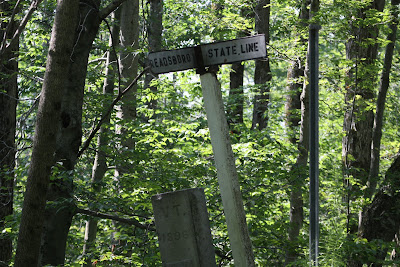 At the end of the block (after Tilda Hill Rd. in Florida turns into Mail Rd. in Monroe) you're right down along a small brook which flows into Dunbar Brook and eventually the Deerfield River. We found Brook Trout in the brook and spent some time feeding them small pieces of bread -- all the while listening for breeding birds of course. 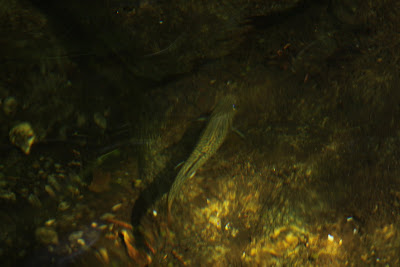 Along Turner Hill Road before reaching the Vt. border there's a large field where we see a few people collecting the low bush Blueberries at this time of year. We listened for Golden-crowned Kinglets in the pines on the far side of the field and also checked out the Clouded Sulphur butterflies looking for a Pink-edged Sulphur. There are occasionally found along blueberry barrens near the Vermont border so we were hoping. 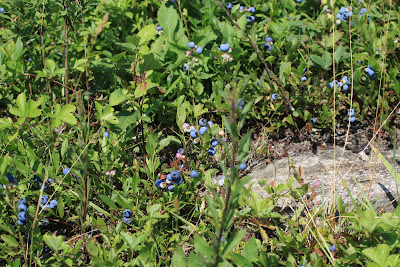 However, any of the sulphurs we were able to get good looks at were all Cloudeds. 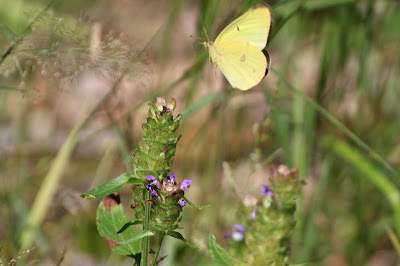 At the very edge of our block we also had some beautiful pea flowers.....still trying to determine the exact species. I'm thinking maybe Sweet Pea, but Mark thinks something else. Any tie-breakers out there? 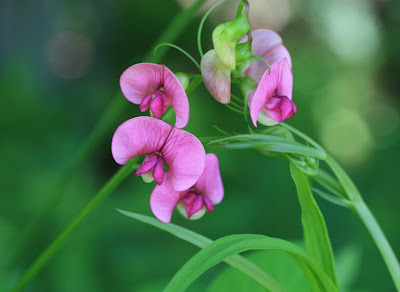 Many folks think late July is past prime time for atlasing, but as this trip proves there is a lot of breeding bird activity going on right through August and you just need to make sure you are aware of safe dates.

Now it's off to finish up our own atlas blocks in the Berkshires!