Still trying to ring out birds for the breeding bird atlas, we do go into Quabbin when we can...partly because it's just a wonderful place to bird, but mostly because there is such a good variety of birds that breed there.  Warbler species on this particular day included American Redstart..... 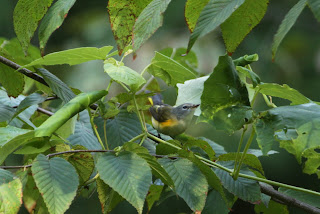 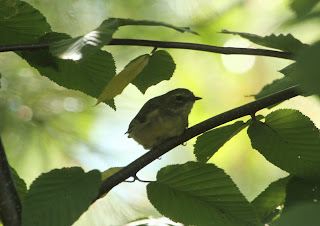 and this sharp-looking Canada Warbler.  And that's only to name a few.  We also regularly have BT Green, Black & White, Pine, Blackburnian, Magnolia, Chestnut-sided, Yellow and, of course, Common Yellowthroat. 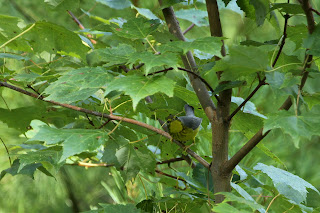 With all the rain this summer we are starting to see fungus everywhere.  Now I'm not great with mushroom identification, so anyone who knows what I'm looking at should definitely add a comment and let me know. 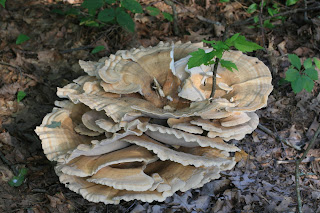 " Mr. Bookman" with whom I live has just ordered 3 mushroom id guides.  I've let him know that I'll keep all shots of 'shrooms in one specific folder and he can spend the time id-ing them to his hearts' content.  My real fear is that once he starts to get good at identification, he's gonna suggest we start cooking them.  Although as he mentioned just this morning "if you get a bird id wrong, it won't kill you".....not necessarily true with mushrooms. 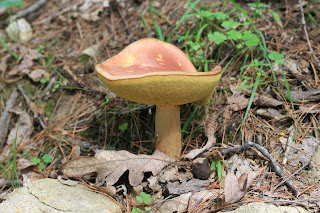 Now this I believe I did identify -- a tooth fungus called Stacka Hydnum. 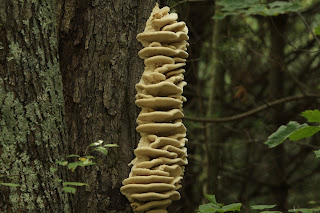 Of course this Common Wood Nymph on a dead tree trunk could be an id challenges of it's own. 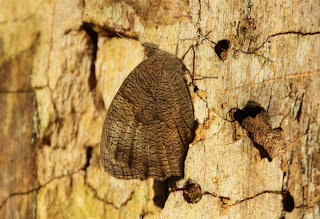 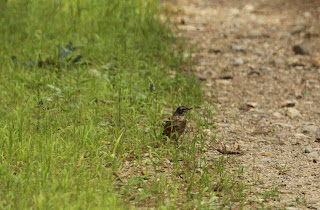 ....we noticed the juvi Robin opening and closing his wings and he appeared to be placing his bill underneath the wing.  Could it be that we actually came across a Robin "anting"?  That's where the bird places ants strategically on it's body so that it can rid itself of mites and other pests. 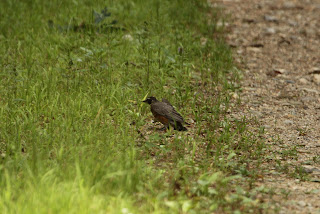 We also came across these two Monarch caterpillars very much enjoying the leaf they were on.  Now this is a good area for Monarch migration (especially out over the water from Gate 35) so it would be interesting if we could be there to watch these guys hatch and take off. 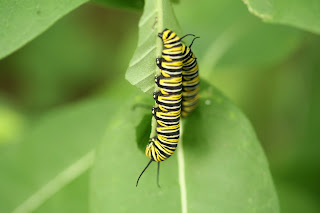 And since the Monarch caterpillars taste deadly to birds, this Red-eyed Vireo won't threaten it. 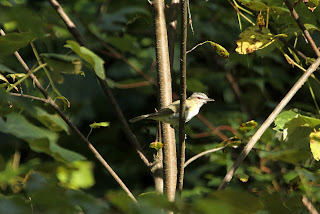 Although I often wonder about juvenile birds.  Will this Red-eyed Vireo know better than to taste those caterpillars?  They do look awfully tasty.... 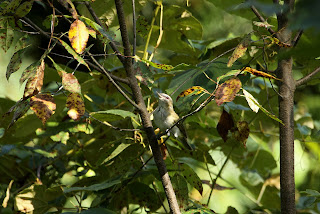 The highlight for this trip was definitely finding a Black Racer stretched lazily across the road....lucky for both the snake and me that Mark spotted it before I ran it over.  Another great photo to add to Mark's list of "photographs of reptiles and amphibians of MA in the hand".  This guy's was definitely checking Mark out to see if he posed any real danger.  Even though he took a quick taste, Mark says the bite doesn't even hurt and he seemed even less problematic that a water snake. 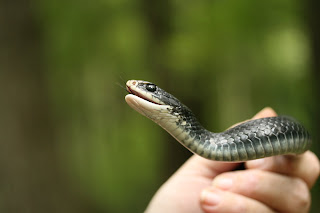