Quabbin and The Brookfields

Desperate to get some birding in before the next snow storm hit, we headed out to Quabbin this morning.  Now he didn't say it, but I know Mark was hoping we would be lucky enough to find the Golden Eagle that Tom Gagnon and others had seen perched on Ram earlier in the week.  Since we were traveling out Rt. 9 we decided to check the various overlooks of the Quaboag.  We had both Common and Hooded Mergansers at a number of spots.  And at the section of the river in West Brookfield near the outflow from Wickabog Lake, we found a Great Blue Heron.  This is probably the same bird we had two weeks ago since it was basically in the same area.  Hopefully he can hang on through the next two storms and make it to the warmer temps they're forecasting for next weekend. 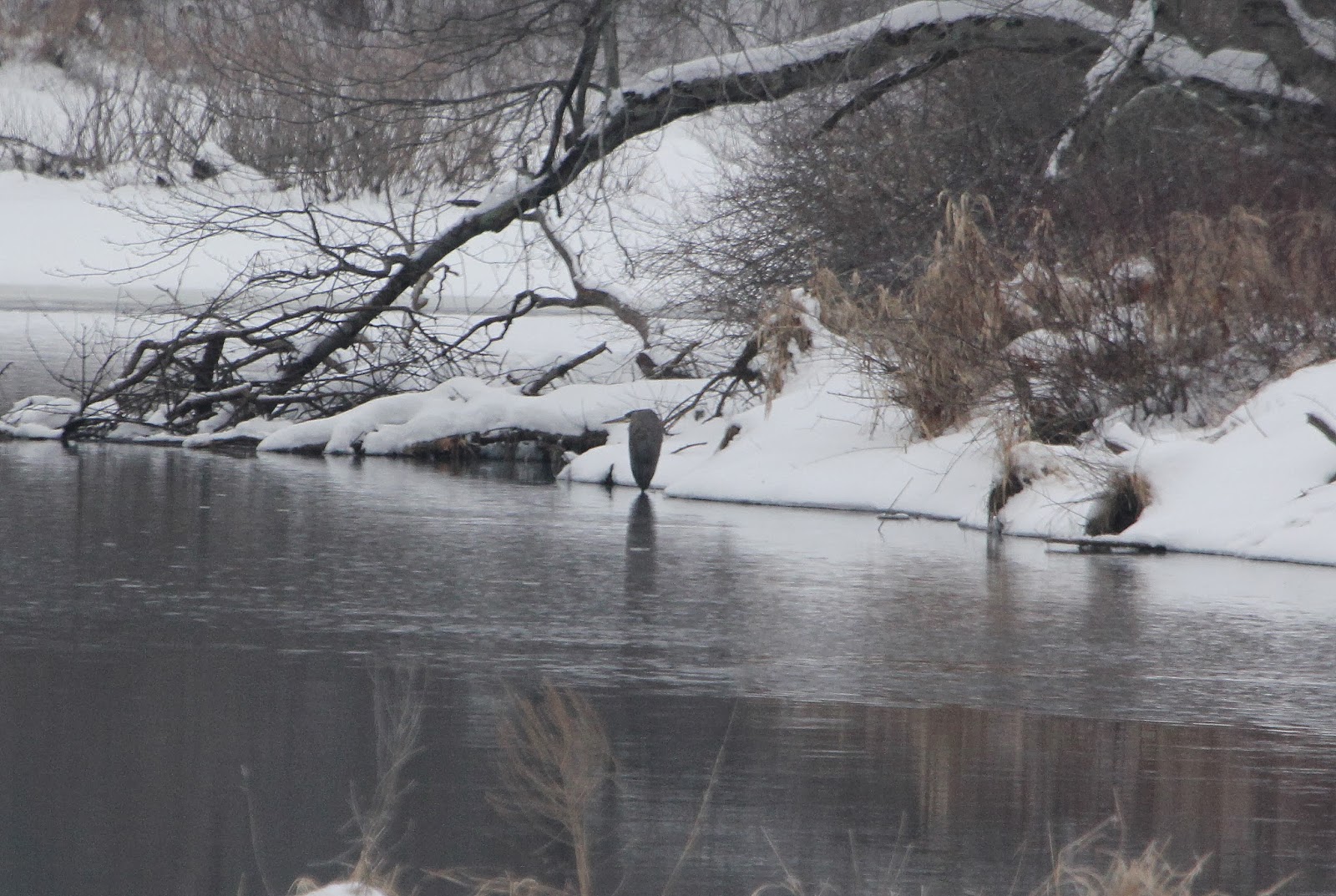 We also had a nice flock of Robins eating some left over crab apples in the parking lot. 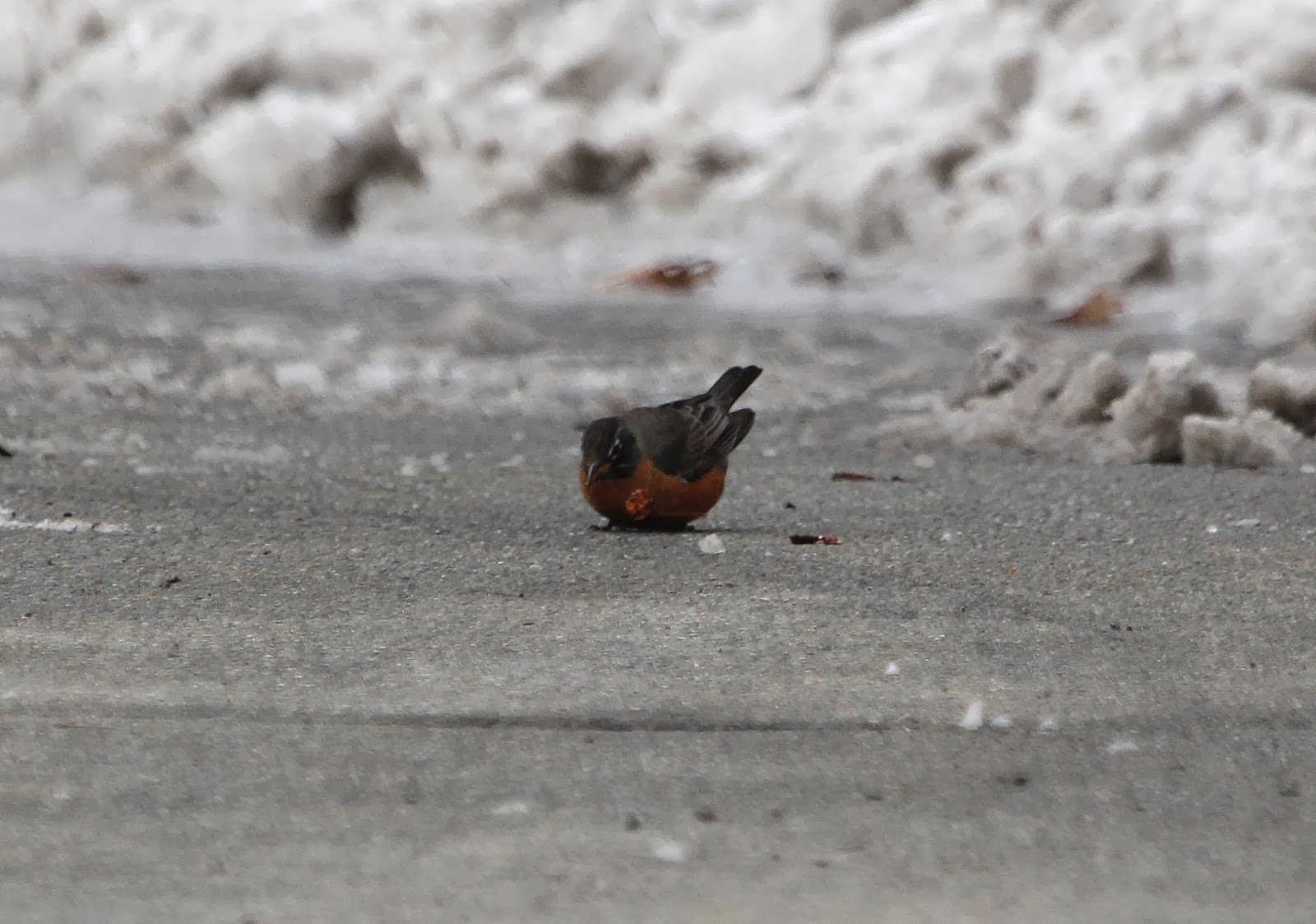 When we arrived at Quabbin we were surprised to find the gates closed.  I guess the roads were still a little icy or maybe they were concerned about letting people in only to have to kick them out if the snow came in a bit early.  Anyway, since we weren't able to drive through south Quabbin this put an end to any hopes of seeing the Golden Eagle from Enfield Lookout.

As soon as we pulled into the parking area by Winsor Dam, though, we saw a pack of coyotes out towards Gate 8.  Some crossed the frozen landscape and headed into the woods much closer -- probably more like the Gate 5 area.  Great looks at these guys in the scope! 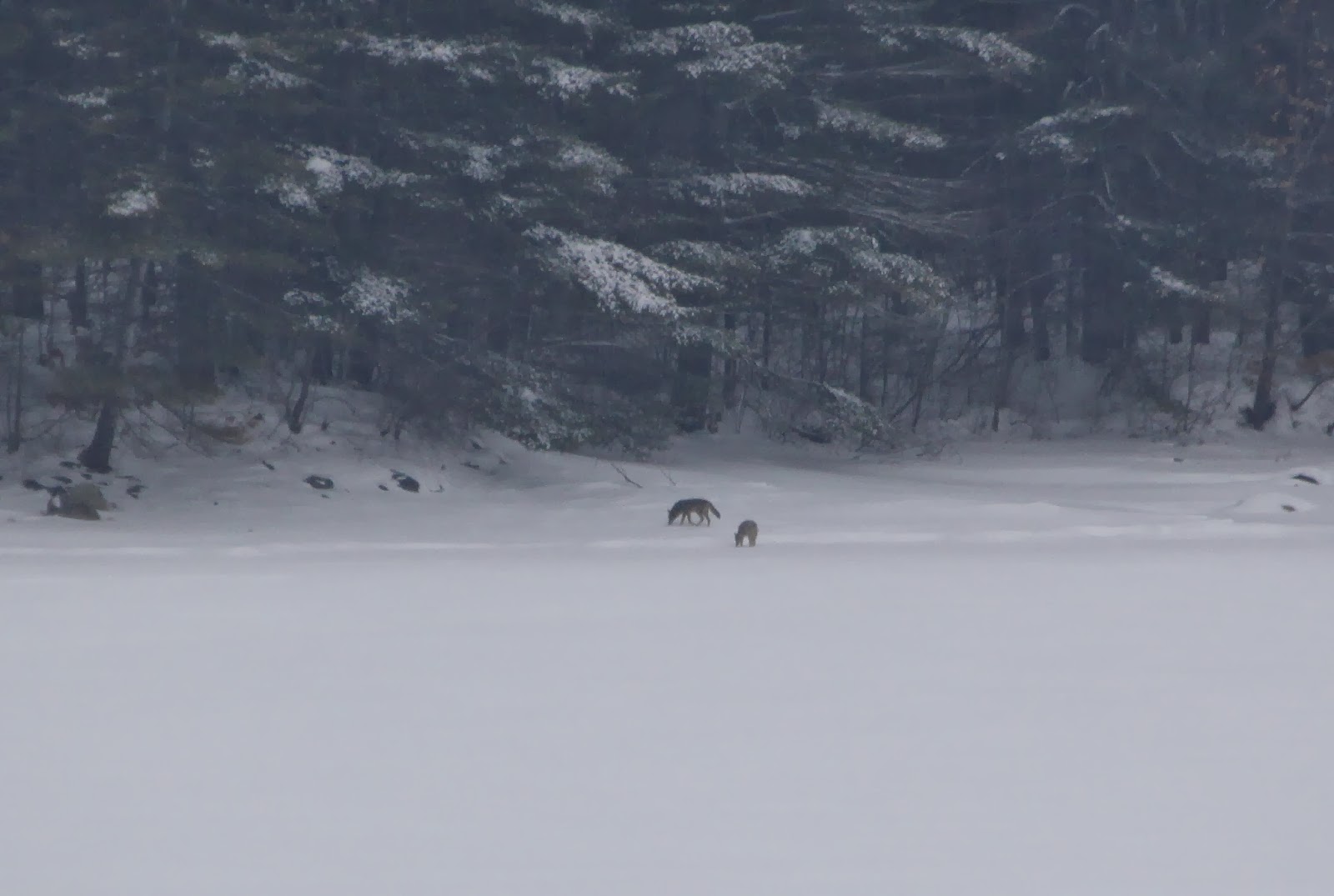 Mark was concerned since one of the coyotes further out seemed to be limping....but the two closest to us looked quite healthy. 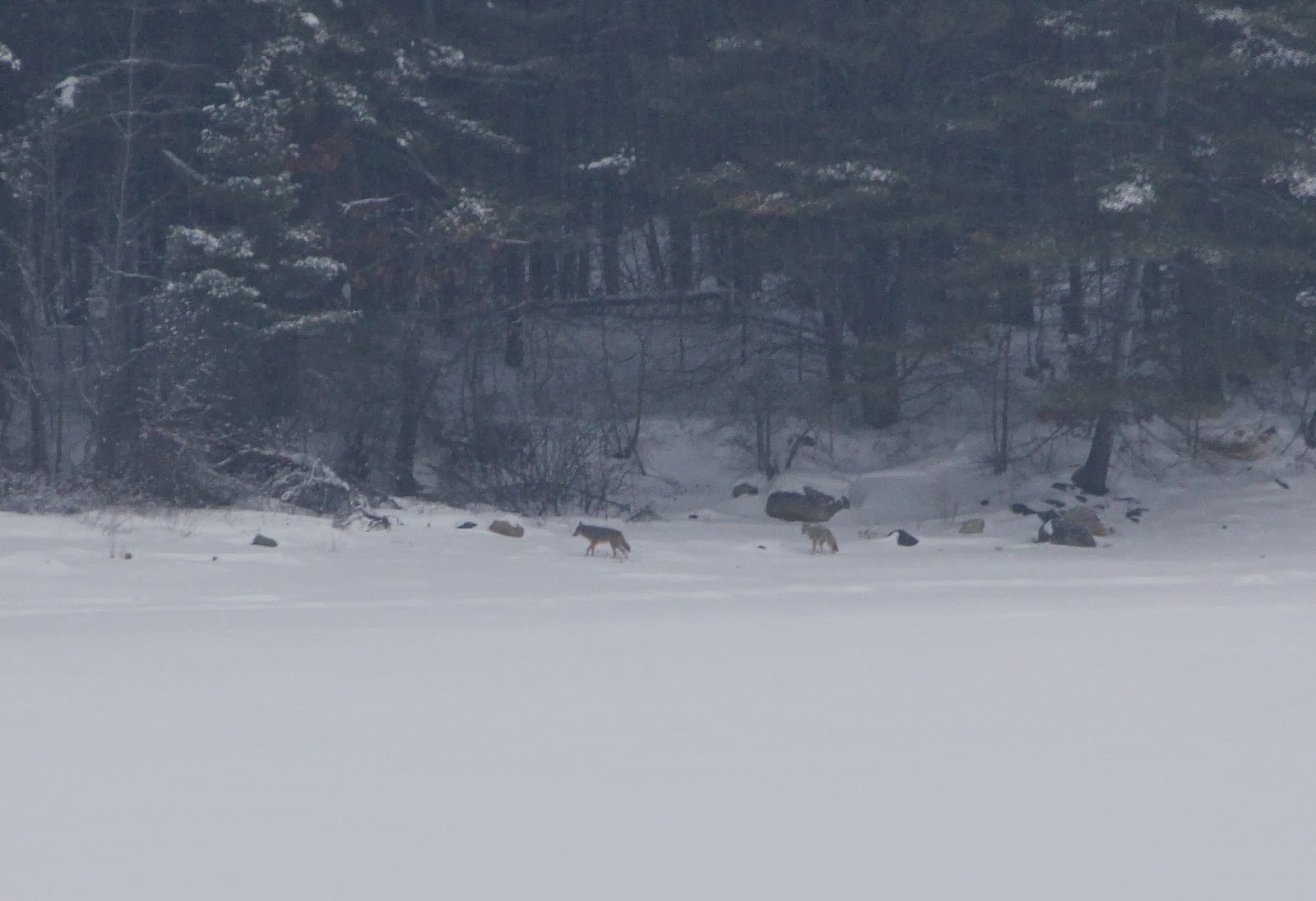 Again, robins seemed to be the predominant landbird in the area...we had a good-sized flock flying back and forth between the bushes right below us and the crab apple trees across from the parking lot.  We also had a number of Ceder Waxwings as well. 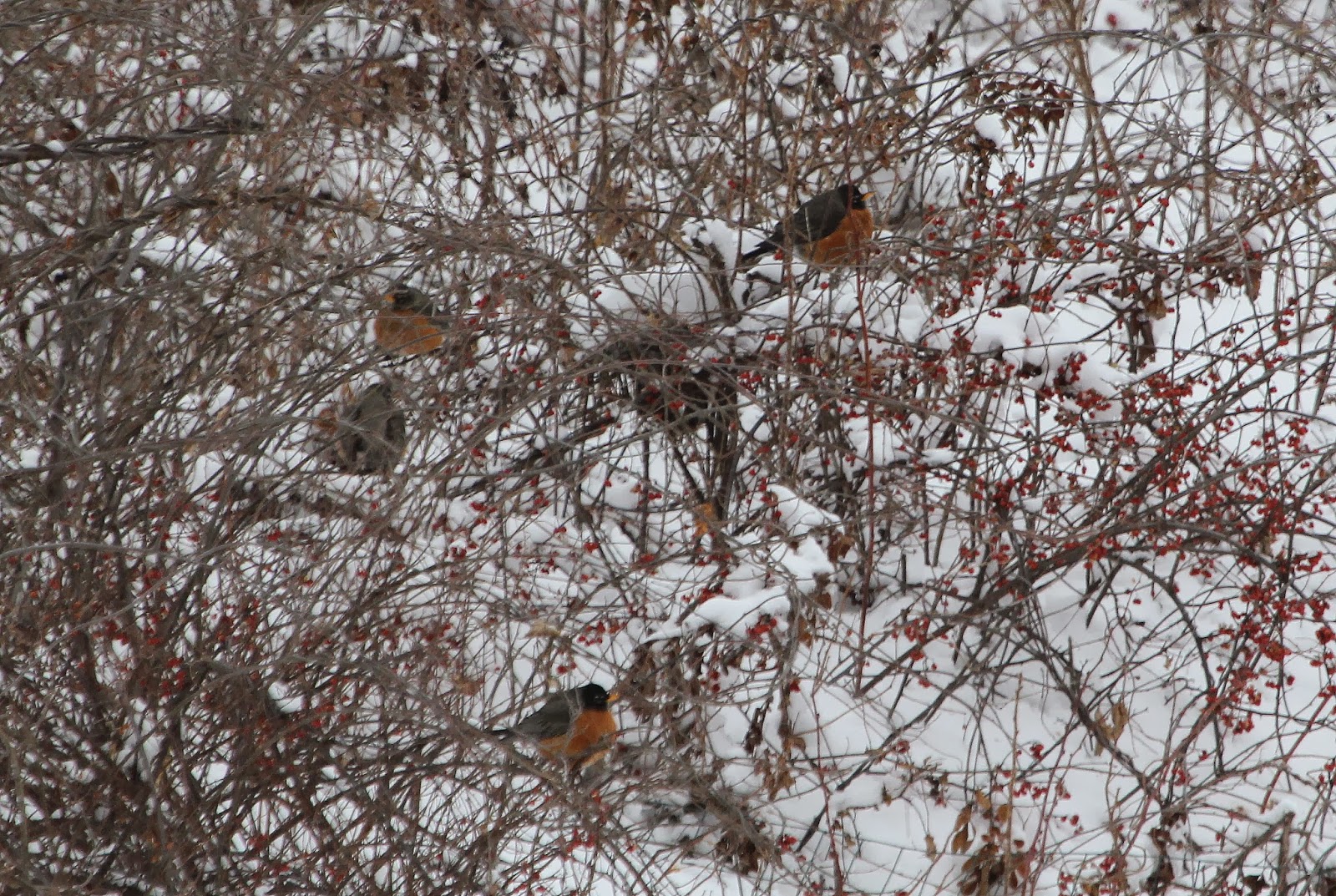 As we were standing on the sidewalk 3 Bald Eagles flew over looking like they were heading out of Quabbin...probably in search of some open water.  This sub-adult bird flew right overhead and disappeared behind the pine trees just before the dam. 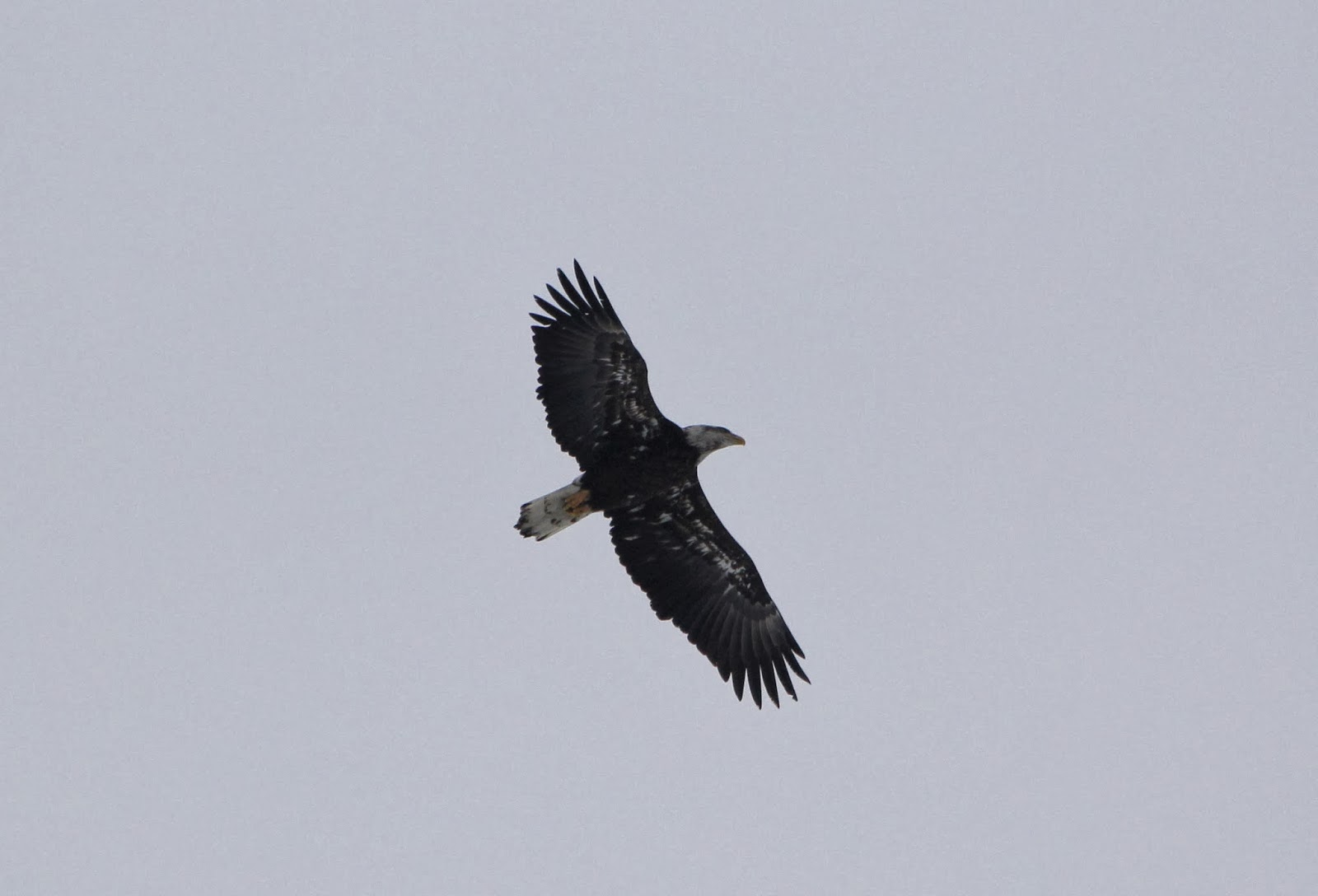 Thinking they might go the fish hatchery we headed over ourselves.  We had one immature eagle and 2 Ring-billed Gulls. There was also a small flock of Juncos and, of course, lots of Rainbow Trout! 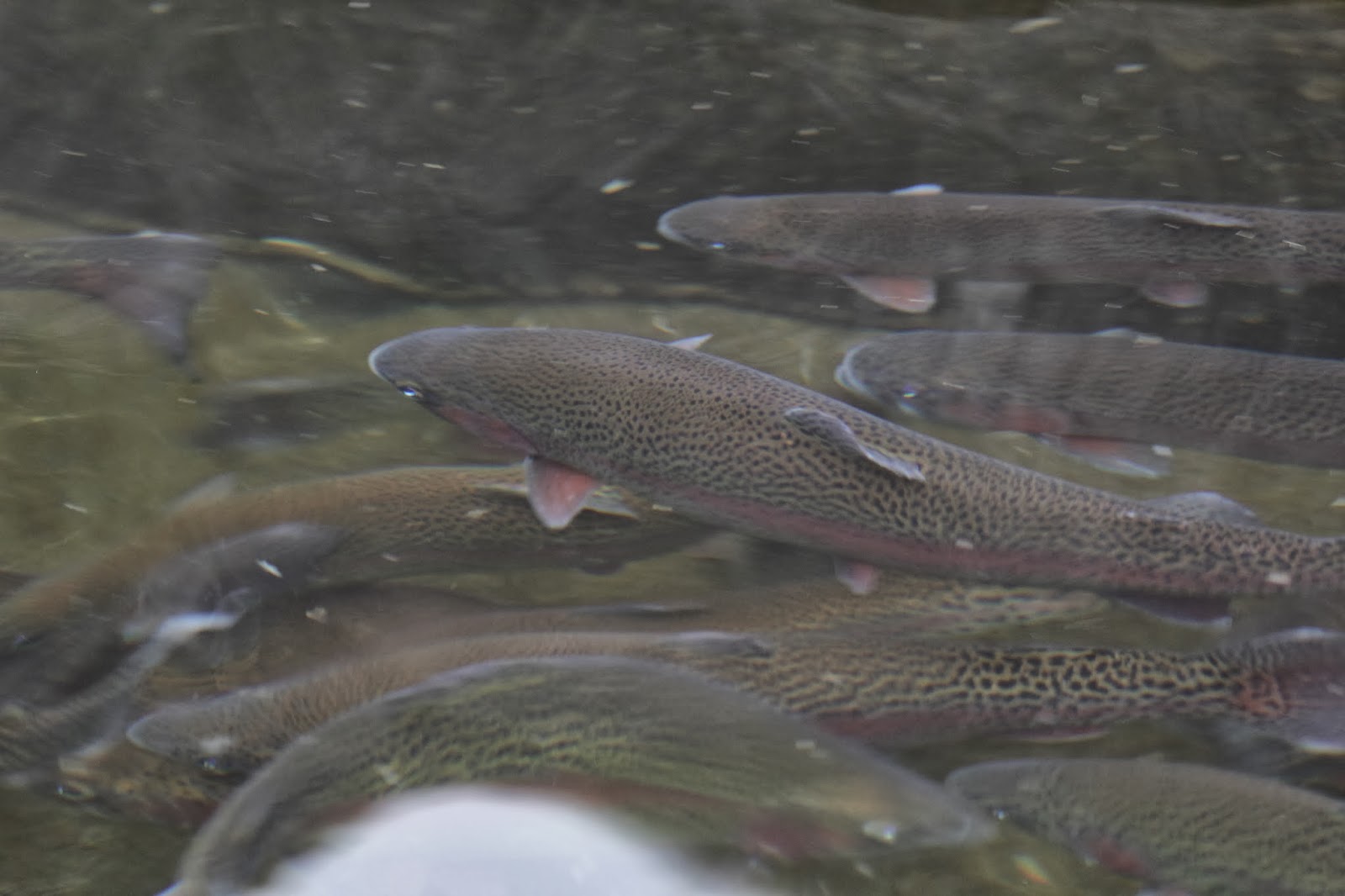 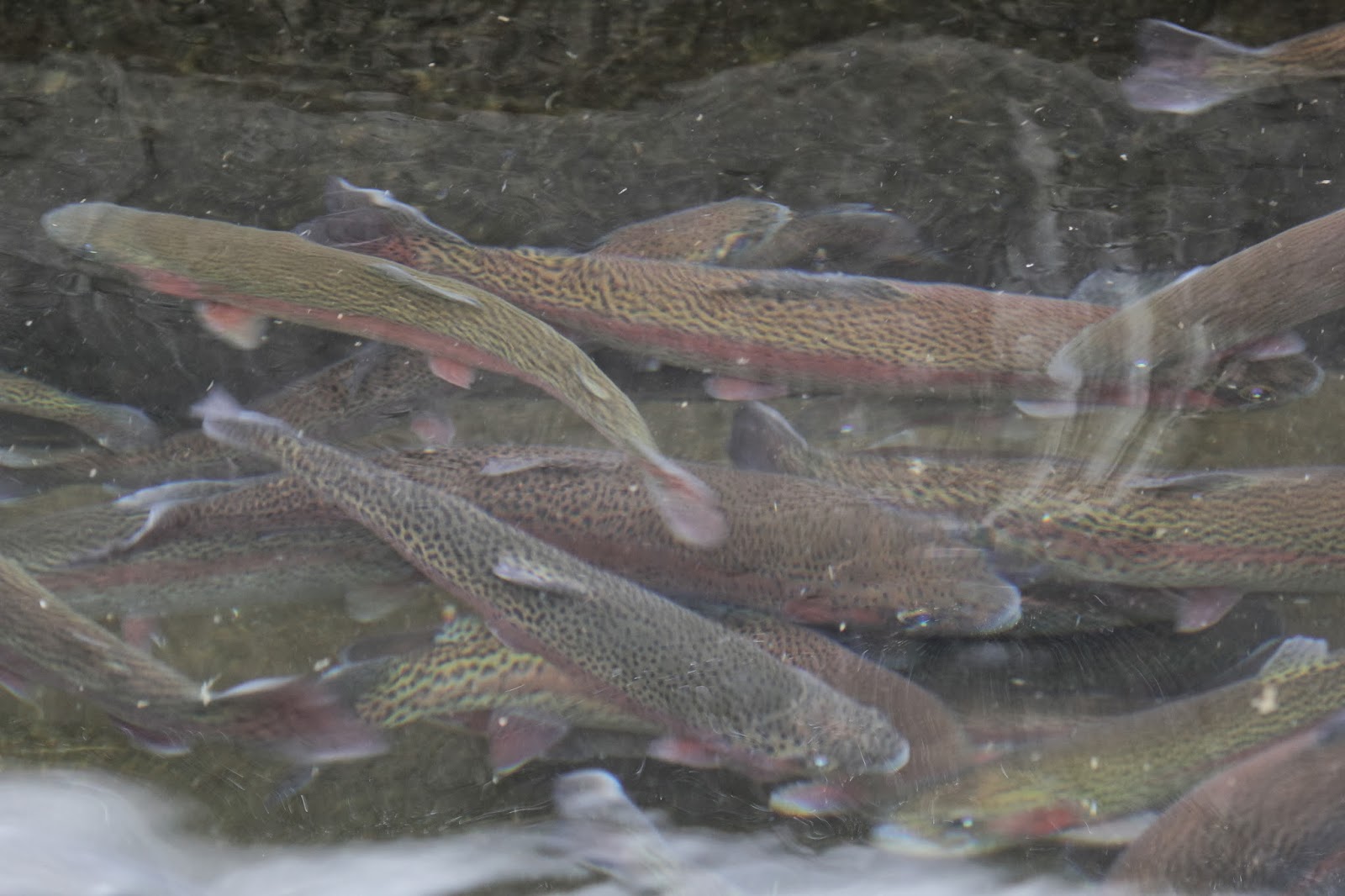 After leaving the hatchery we drove south on East Street and came upon this Red-tailed Hawk perched along a field near the WMA....probably waiting for a meal. 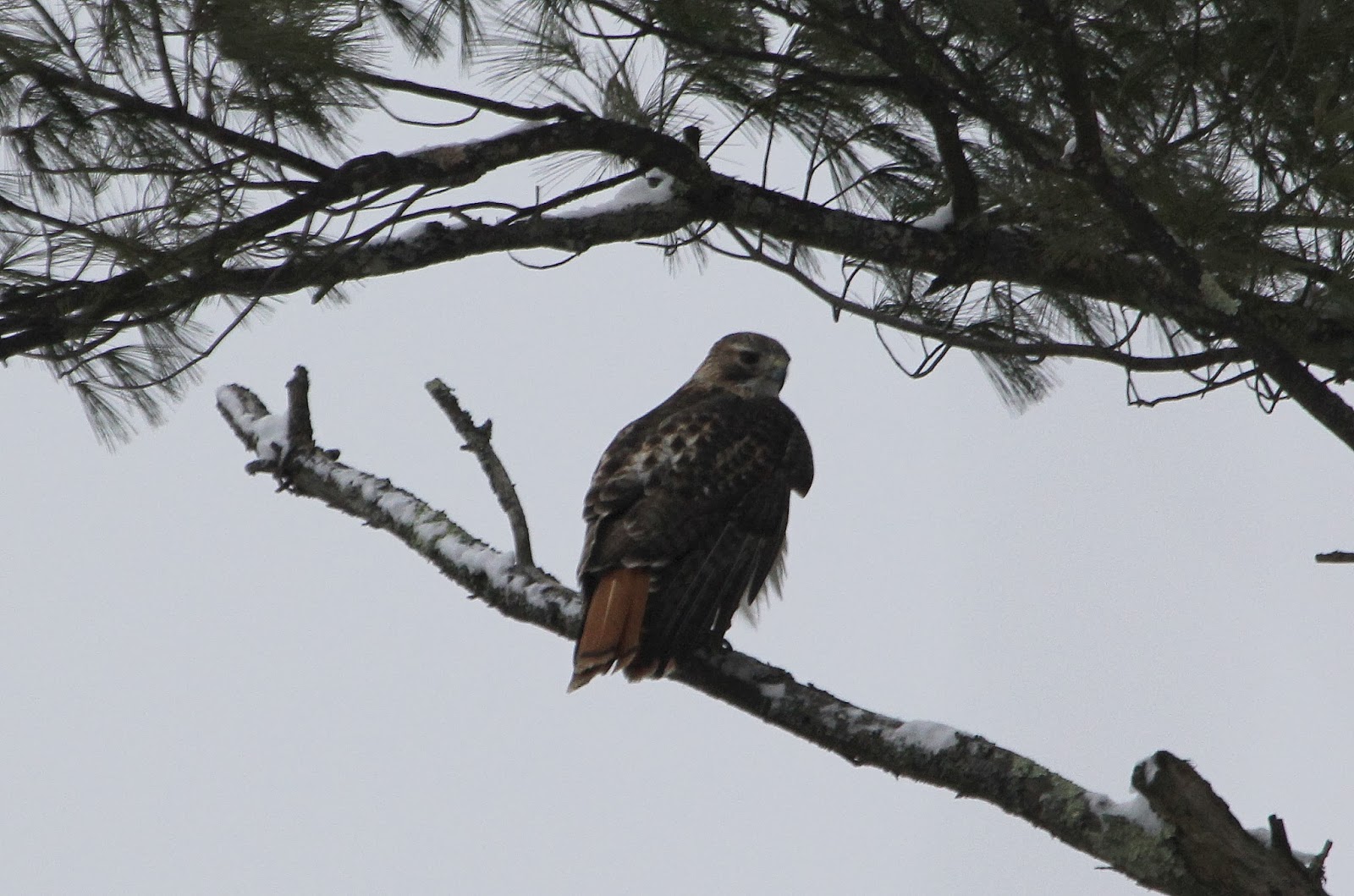 Unfortunately, he/she noticed us pretty quickly and flew over to find a less disturbed perch. 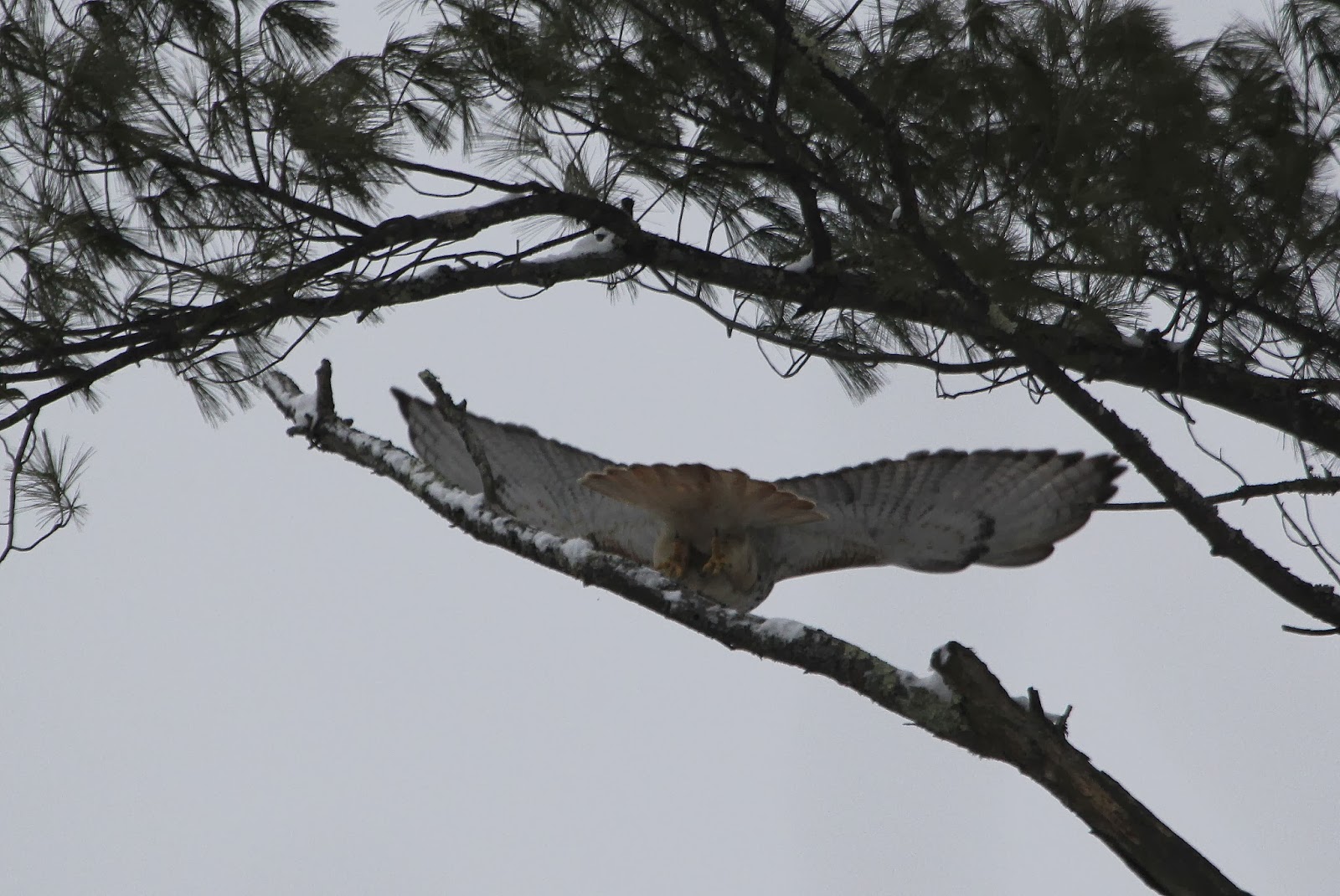 Our reason for taking this little drive is to check out any open water along the Swift River...and right along River Road there's a broadening of the river and we've had good luck this winter with Hooded Mergs in this area.  And today was no exception.  We had a nice selection of hoodies with some of the males displaying to the females as well as other males nearby. 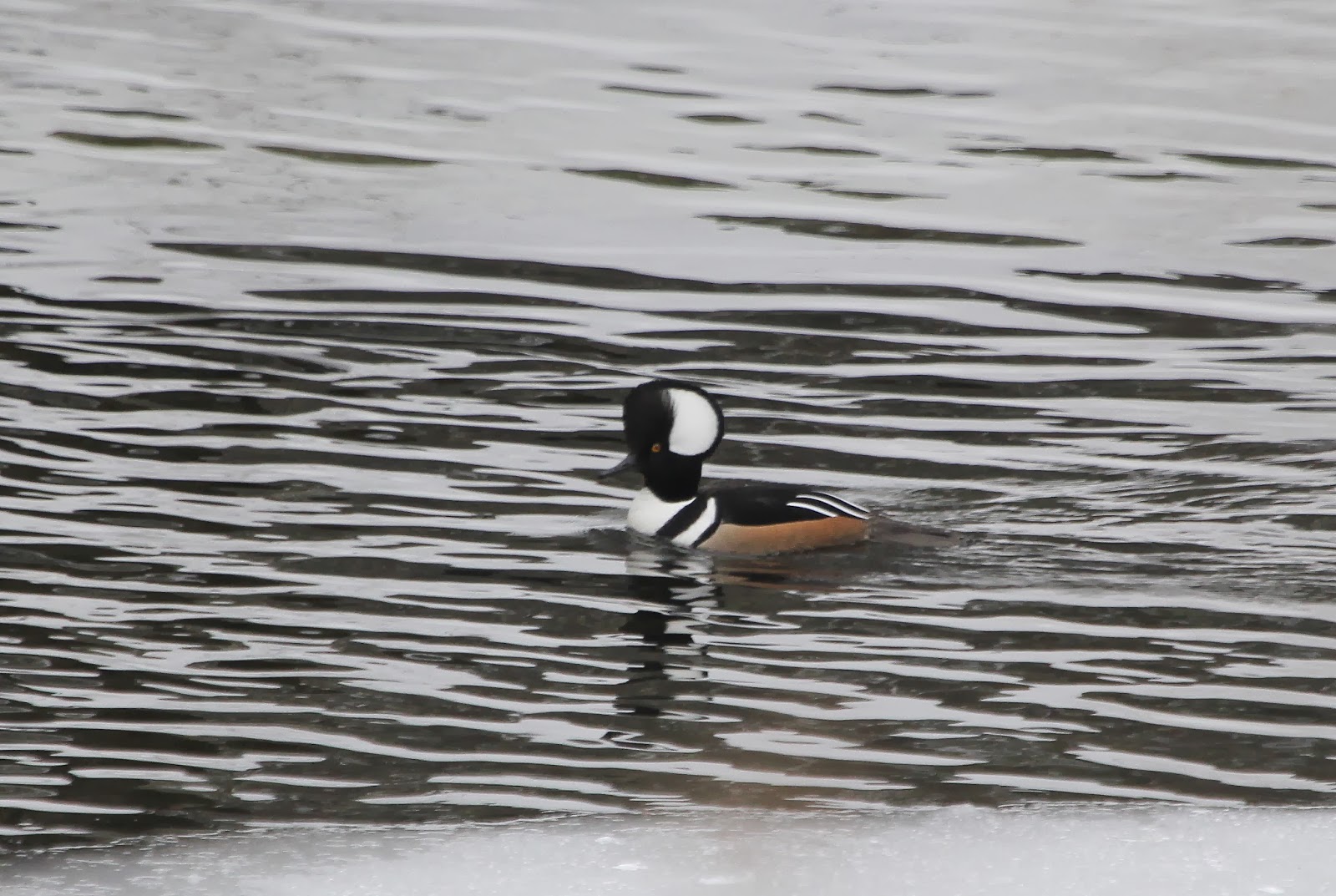 After completing the circuit we headed back to the administration building to check out the status of both the coyotes and re-check the robins in the hopes of finding something more unusual (like a Varied Thrush maybe).  The coyotes were still out on the ice; however, the snow was starting to fly and it made visibility a bit of a problems.  I did have the same sub-adult Bald Eagle fly over again though so it wasn't a total loss. 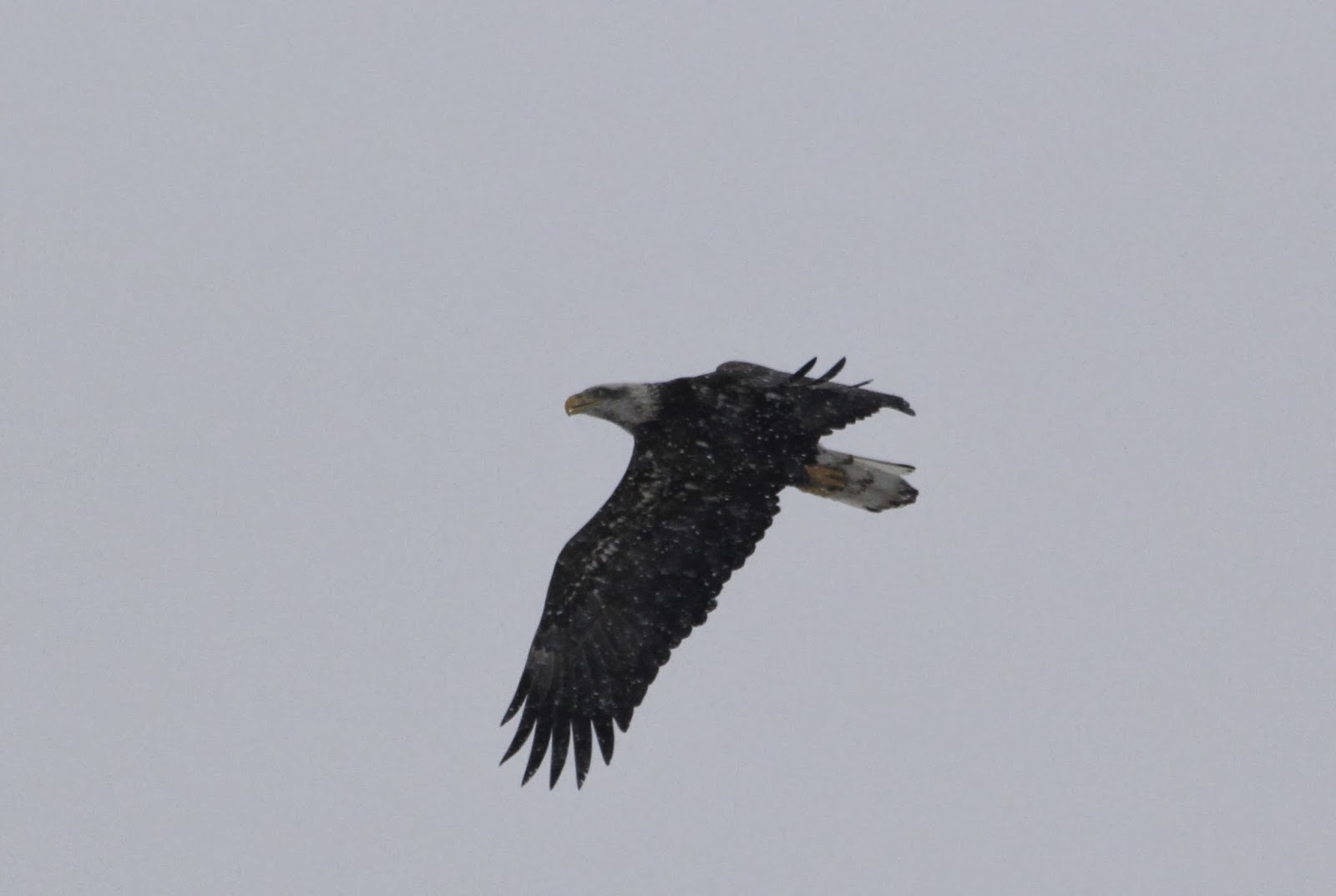 Since it was starting to snow and we needed to get to Sturbridge to pick up bird seed, we left Quabbin and headed down to Bill & Nancy Cormier's store (The Bird Store & More).  After a short visit with them we headed back to Worcester stopping at Orlando's in Charlton to see if there was any open water for the ducks.  Sure enough there was a small opening and we had close to 300 Mallards.... 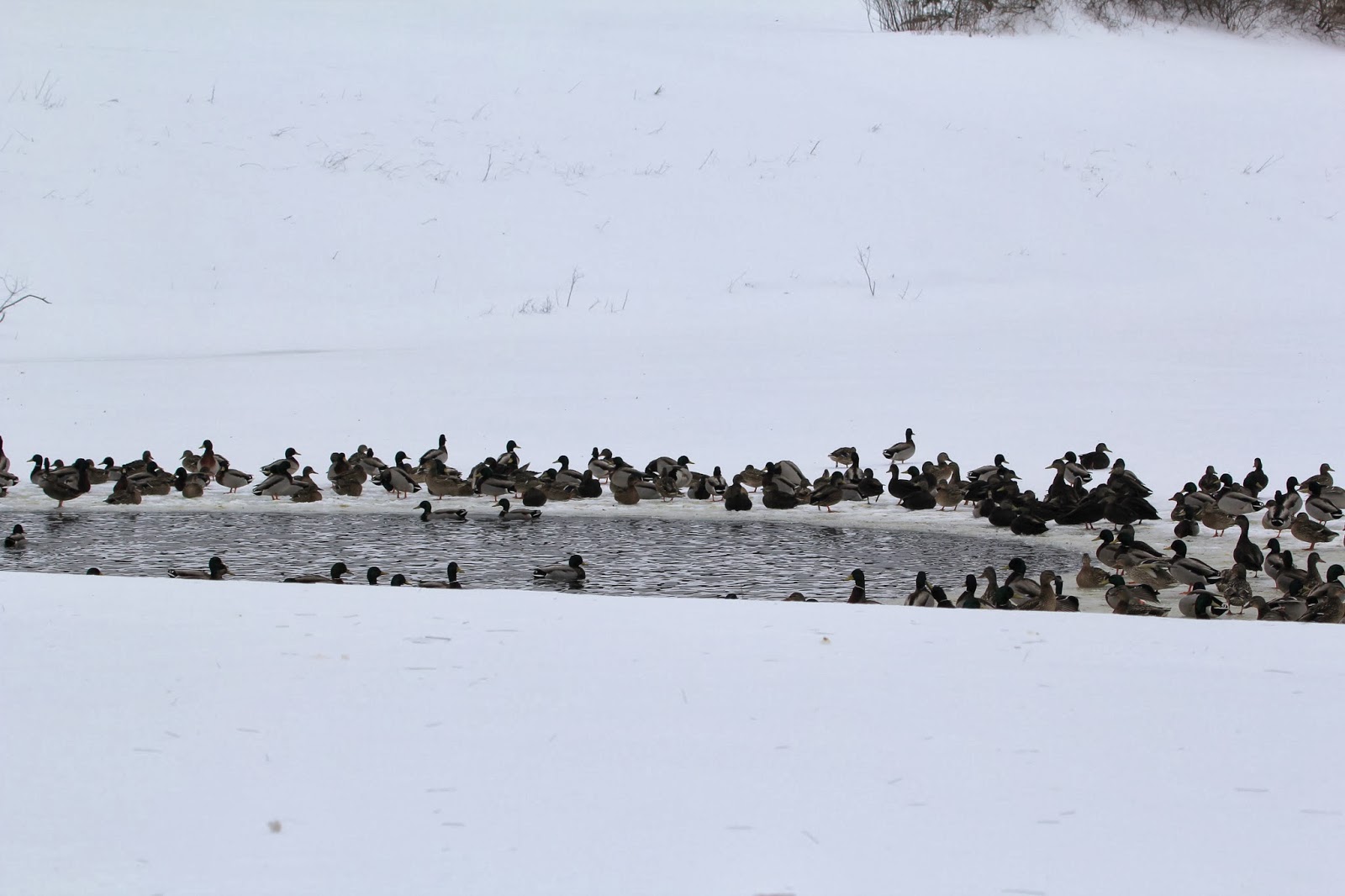 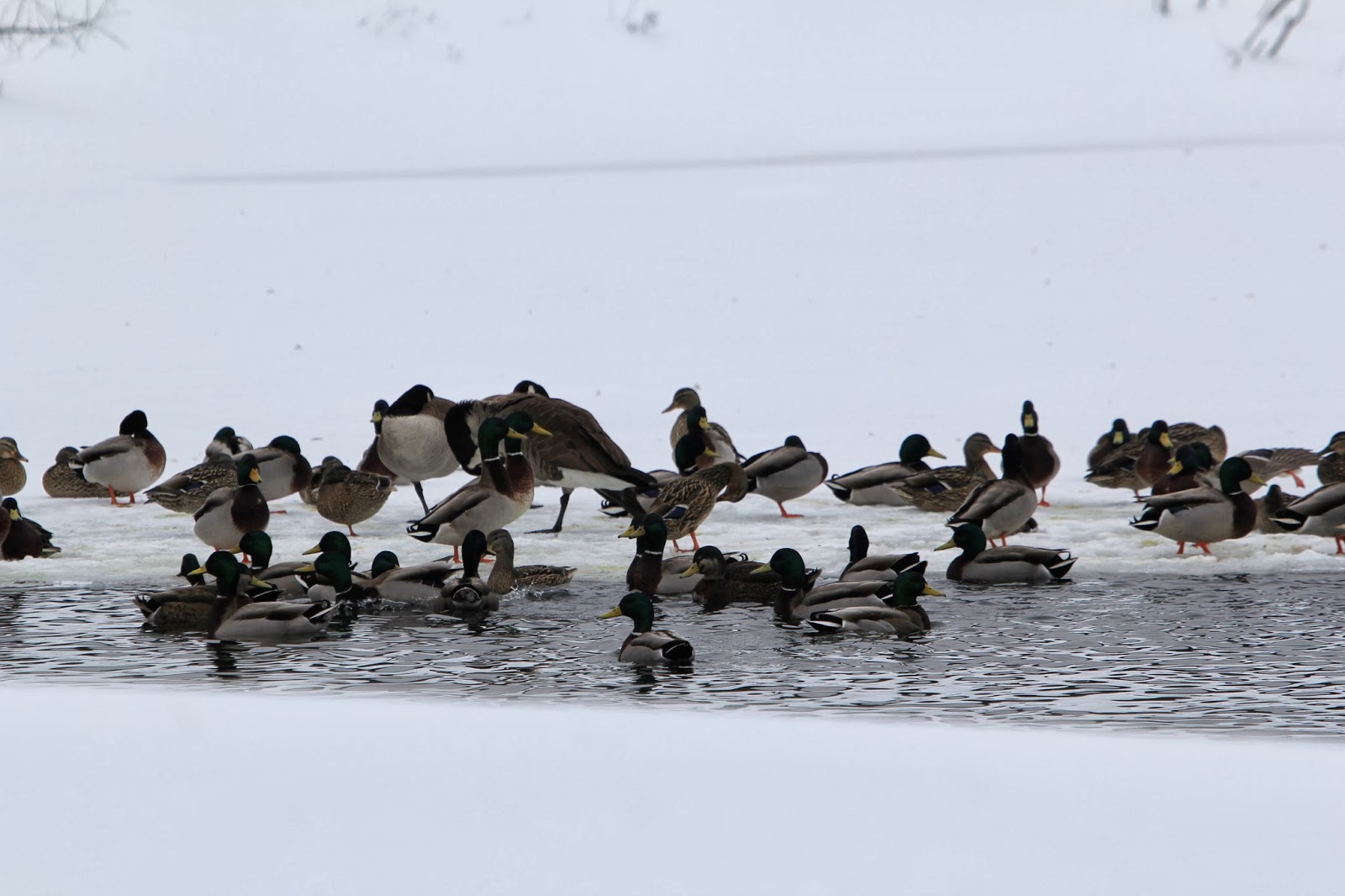 ...and about 30 Black Ducks.  It always amazes me to find this many ducks in such a small area.  However, having watched the farmer drop lots of bread near the pond, I guess I'm not really THAT surprised. 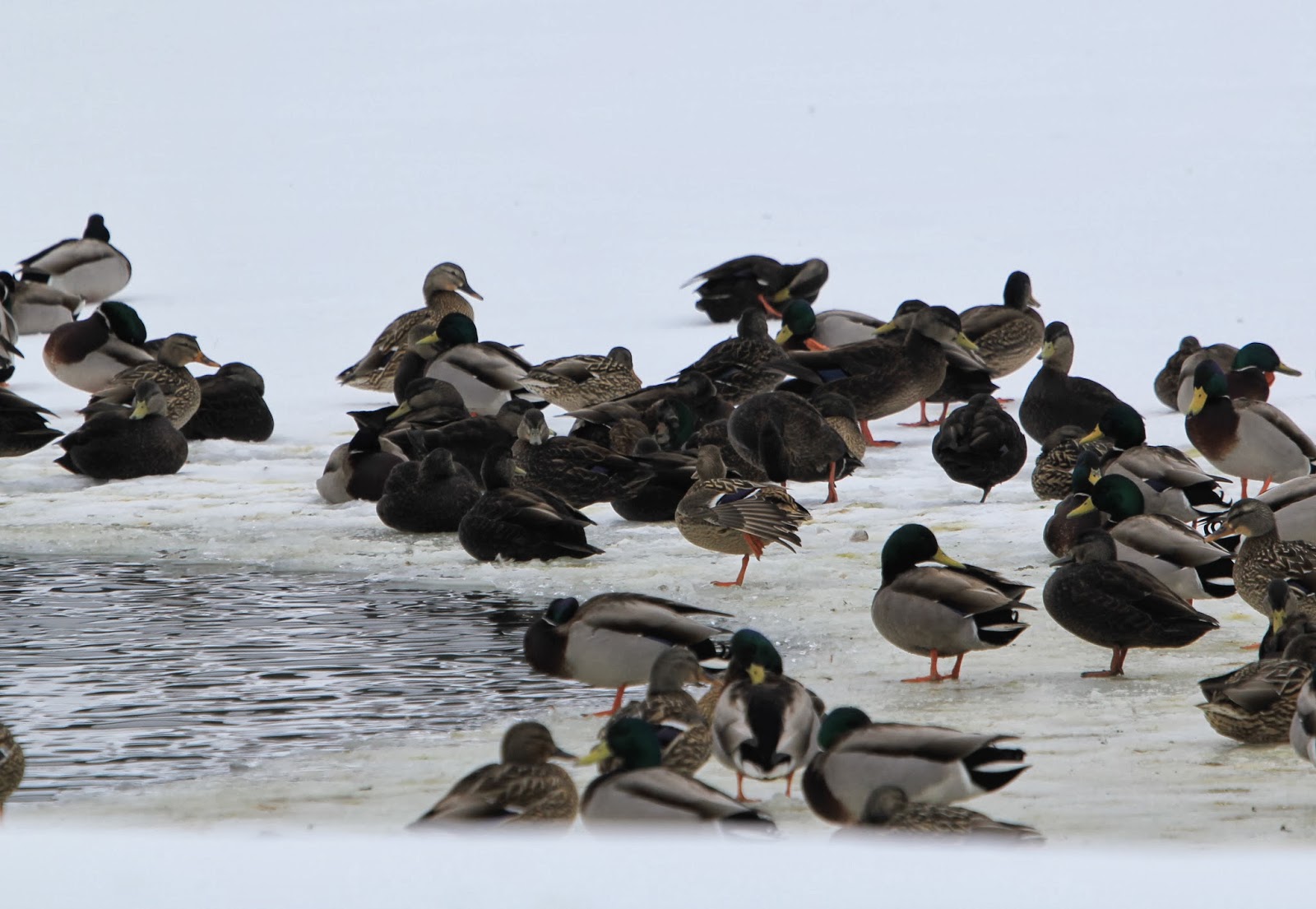 We made it back to Worcester just before 1, filled the feeders (and unfortunately the snowblower) and settled in for the next February snow storm headed our way tonight.  I keep telling myself "just 2 more weeks until March 1st"

Posted by Sheila Carroll at 8:40 PM