Mark and I headed out to Pittsfield State Forest to, hopefully, catch some migrant landbirds and spend time atop Berry Mountain looking for hawks.  I absolutely love this place so I can't tell you how disappointed I was to get to the state park and find a sign saying that the road to the top was closed due to recent storm damage.  Trying to make the best of the situation we opted to drive up Mt. Greylock and hopefully see some of the same species of migrants there.  Driving up the road from Lanesborough things seemed pretty quiet.  We pulled over several times but other than finding a Woolly Bear caterpillar and a Milkweed Tussock caterpillar we didn't see much. 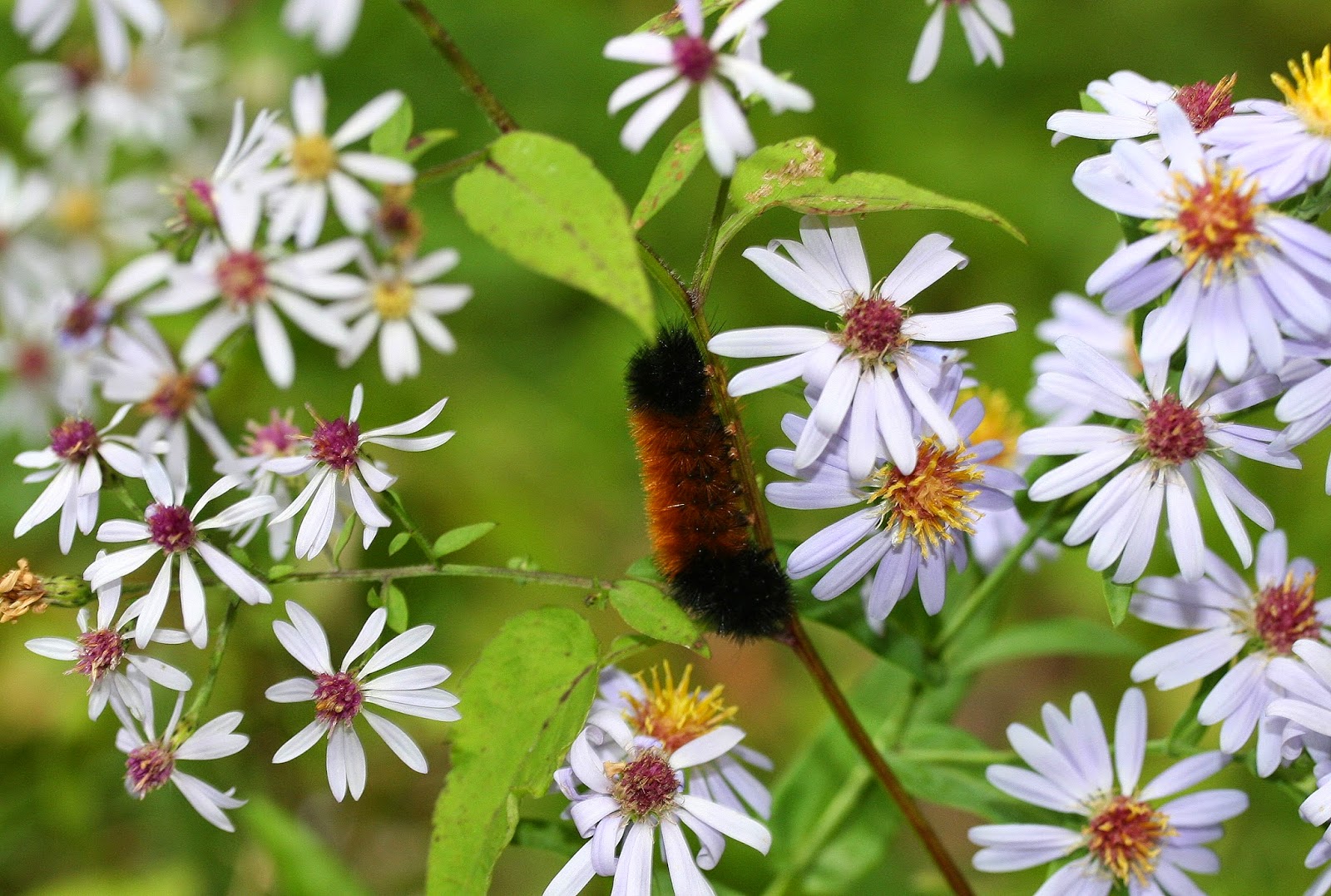 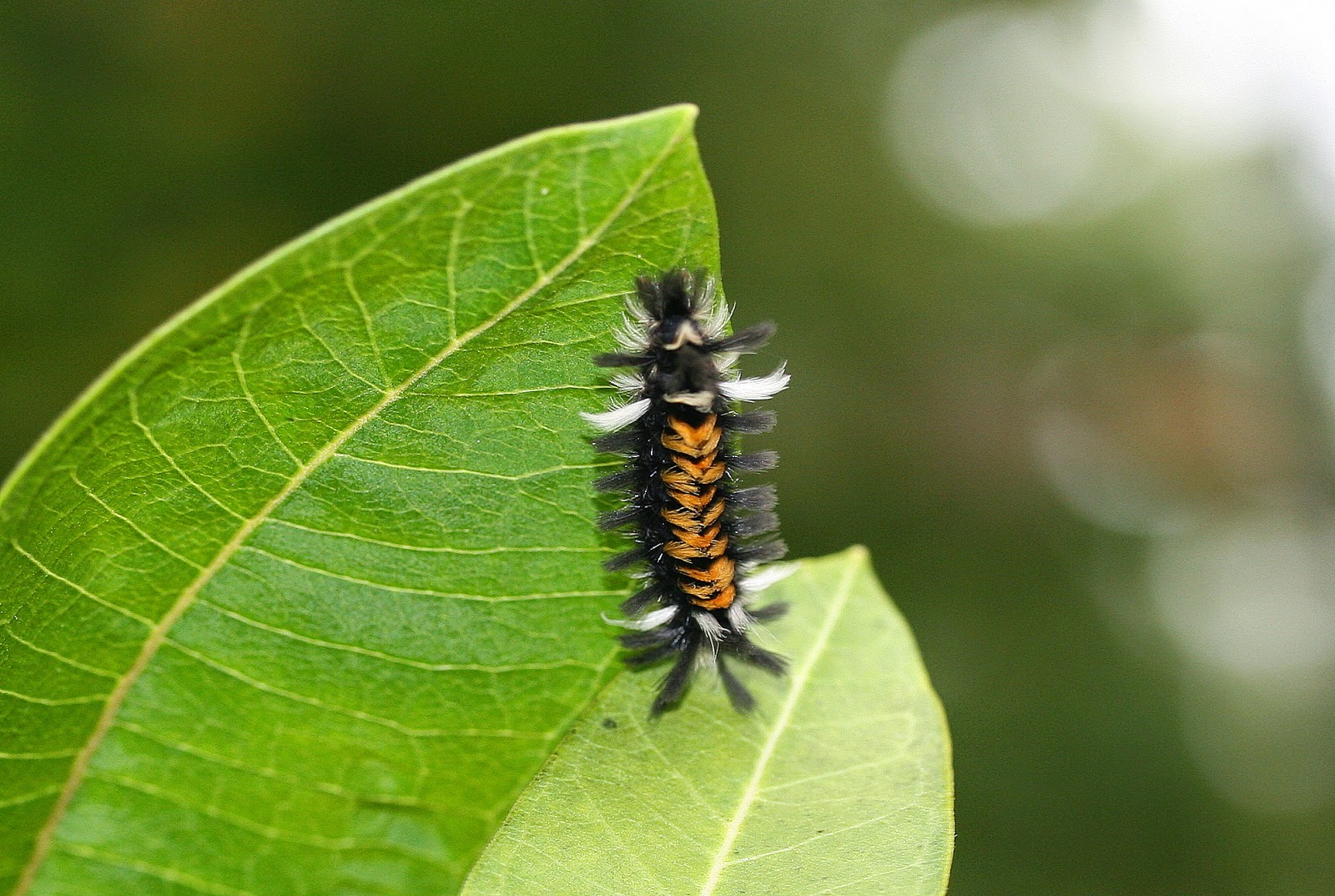 As we got closer to the summit we realized that the low-hanging fog and brisk winds weren't helping either. 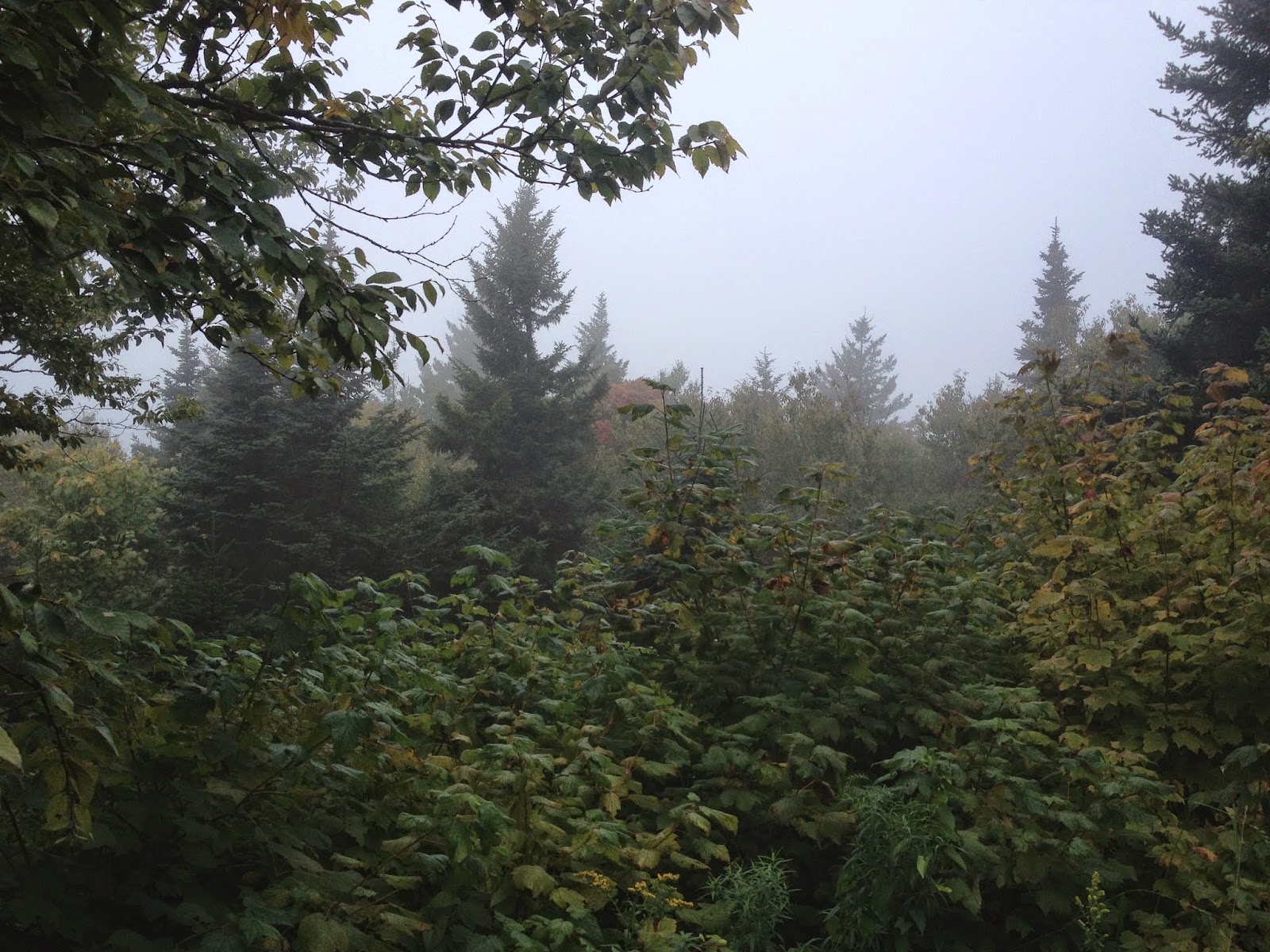 It was about 9:30 at this point, so we decided to bag Greylock for the morning and head down to Williamstown to visit The Clark Museum.  It had reopened this past July after going through an amazing renovation to their 140-acre campus.  Since there was an abstract painting exhibition on display we figured we could spend some time inside and then hike around the campus on the more than 2 miles of trails they advertised. 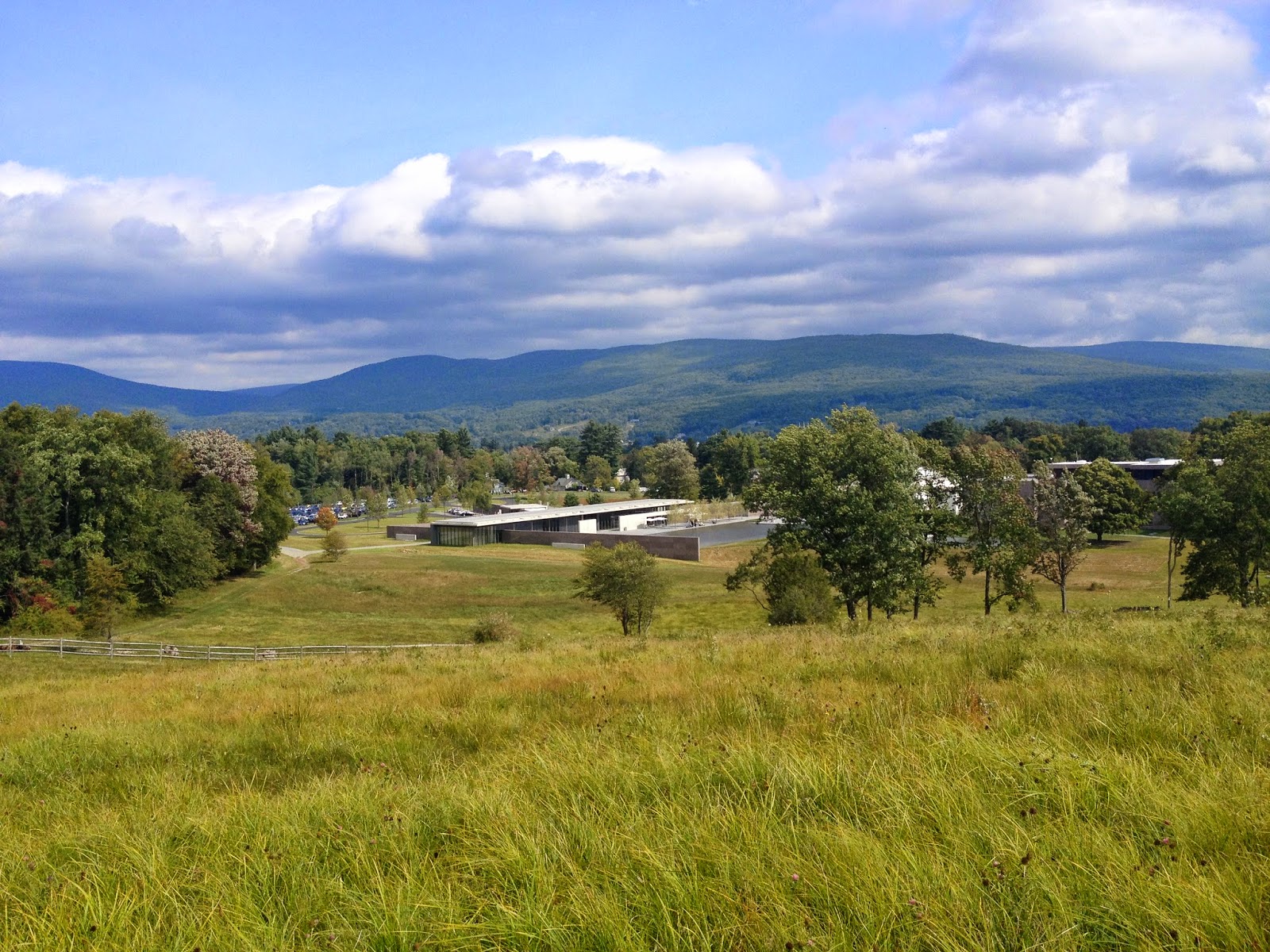 And it was as advertised!  We were totally blown away when we got there.  Not only was the design of the museum absolutely gorgeous, we arrived on the next-to-last day of an exhibition of ancient bronze castings from the Shanghai Museum.  Unfortunately photography wasn't allowed so I can't show you some of the amazing pieces in the exhibit.  However, the abstract paintings from the National Gallery in DC was just as fantastic...and they did allow photography. 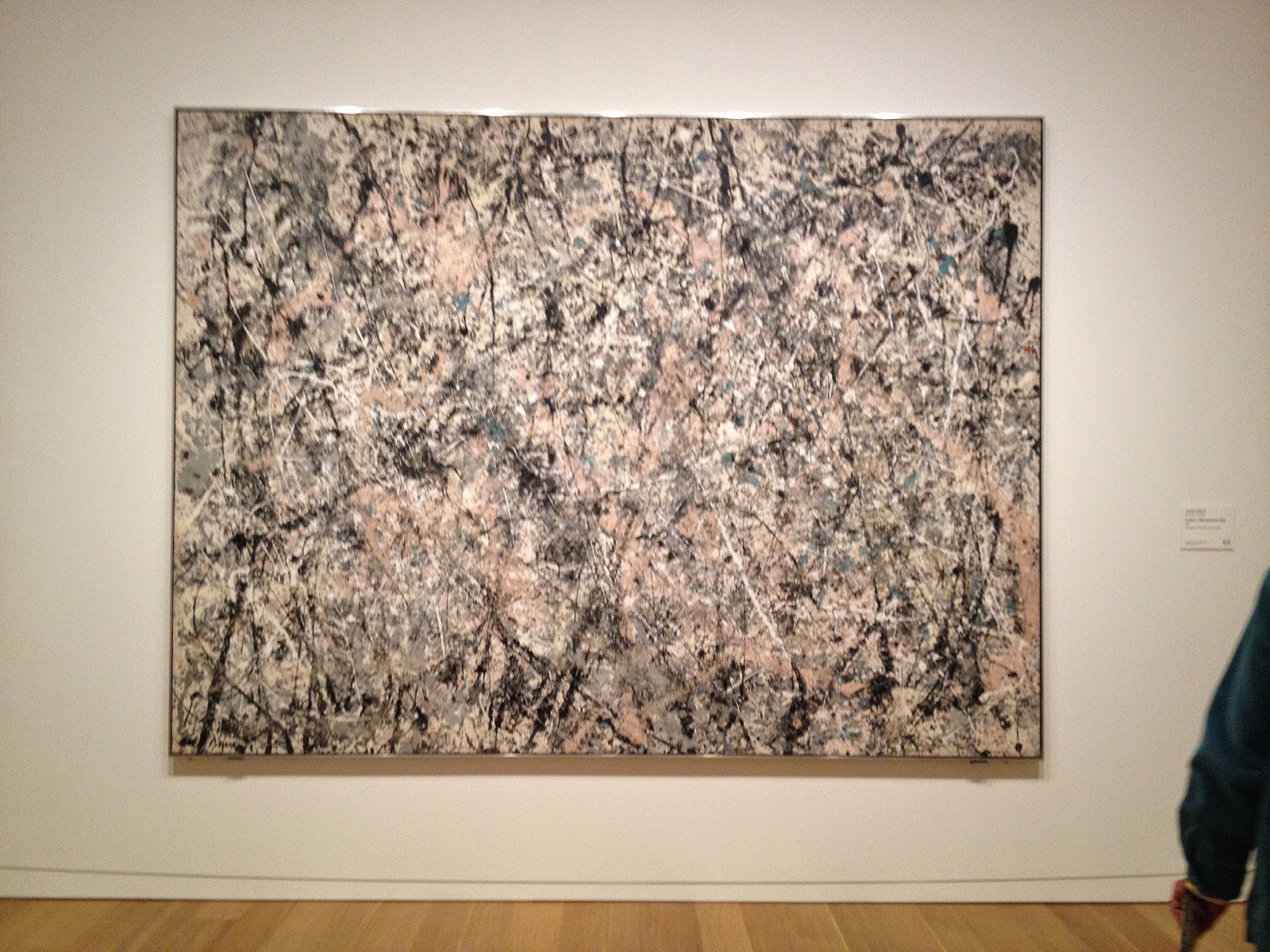 Of course they chose a Jackson Pollock (Number 1, 1950 Lavender Mist) as the signature piece when you entered the gallery, which was okay with me since I must admit that I truly enjoy his work.  I still remember back in the 80's having a dress that everyone said looked like one of his paintings...and I loved the dress.  The dress was quite like the close-up below, with less pink tones. 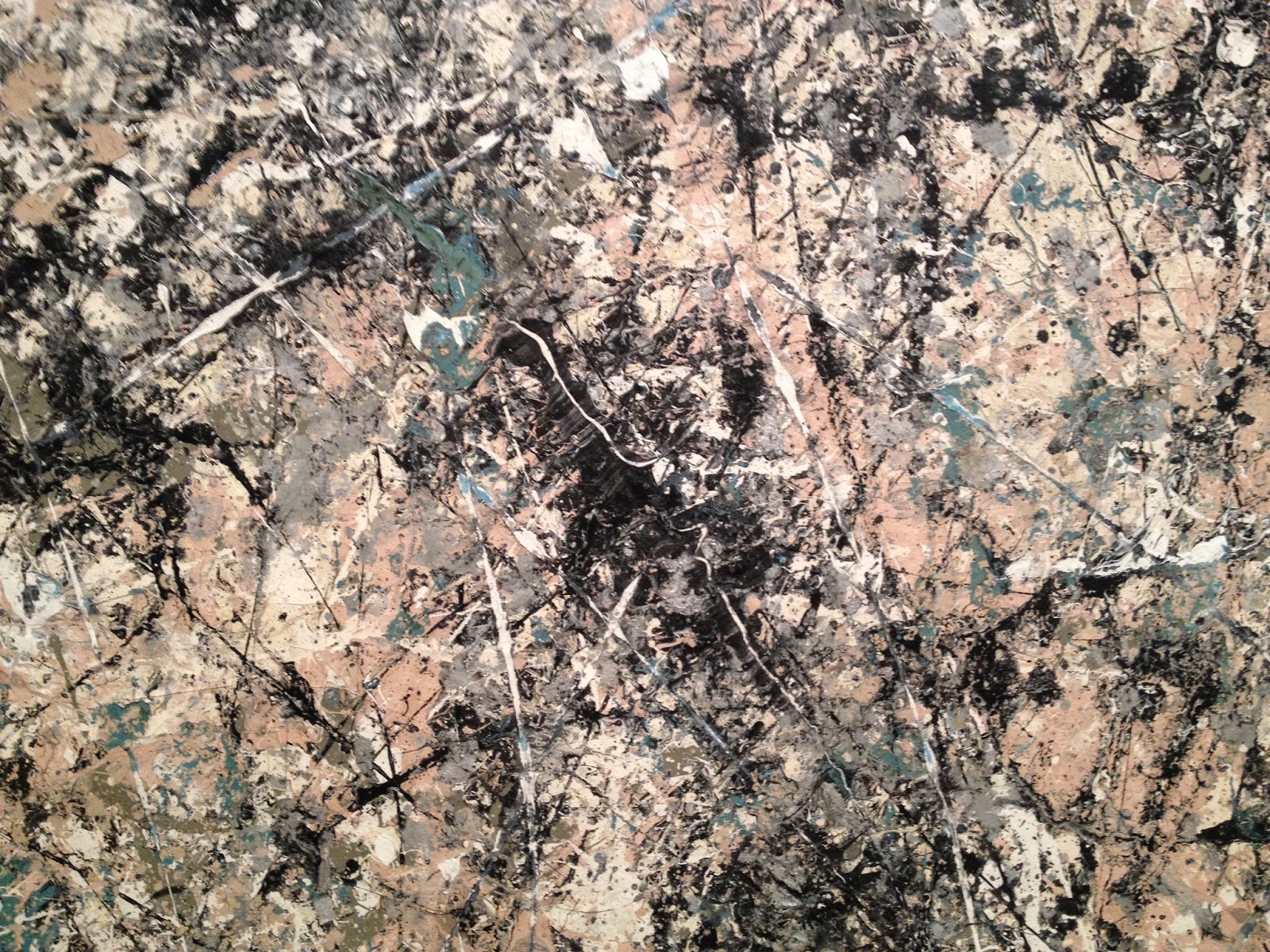 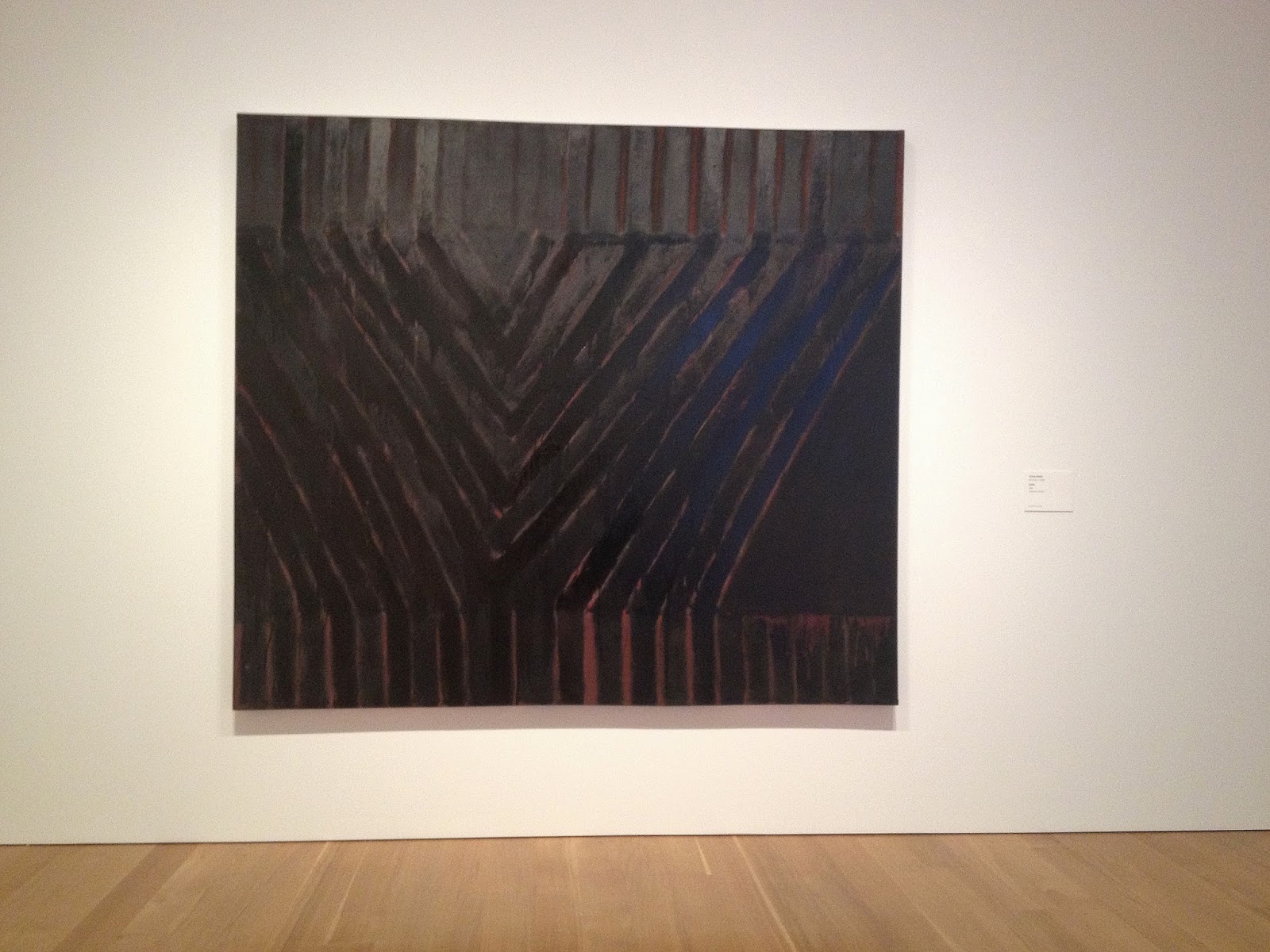 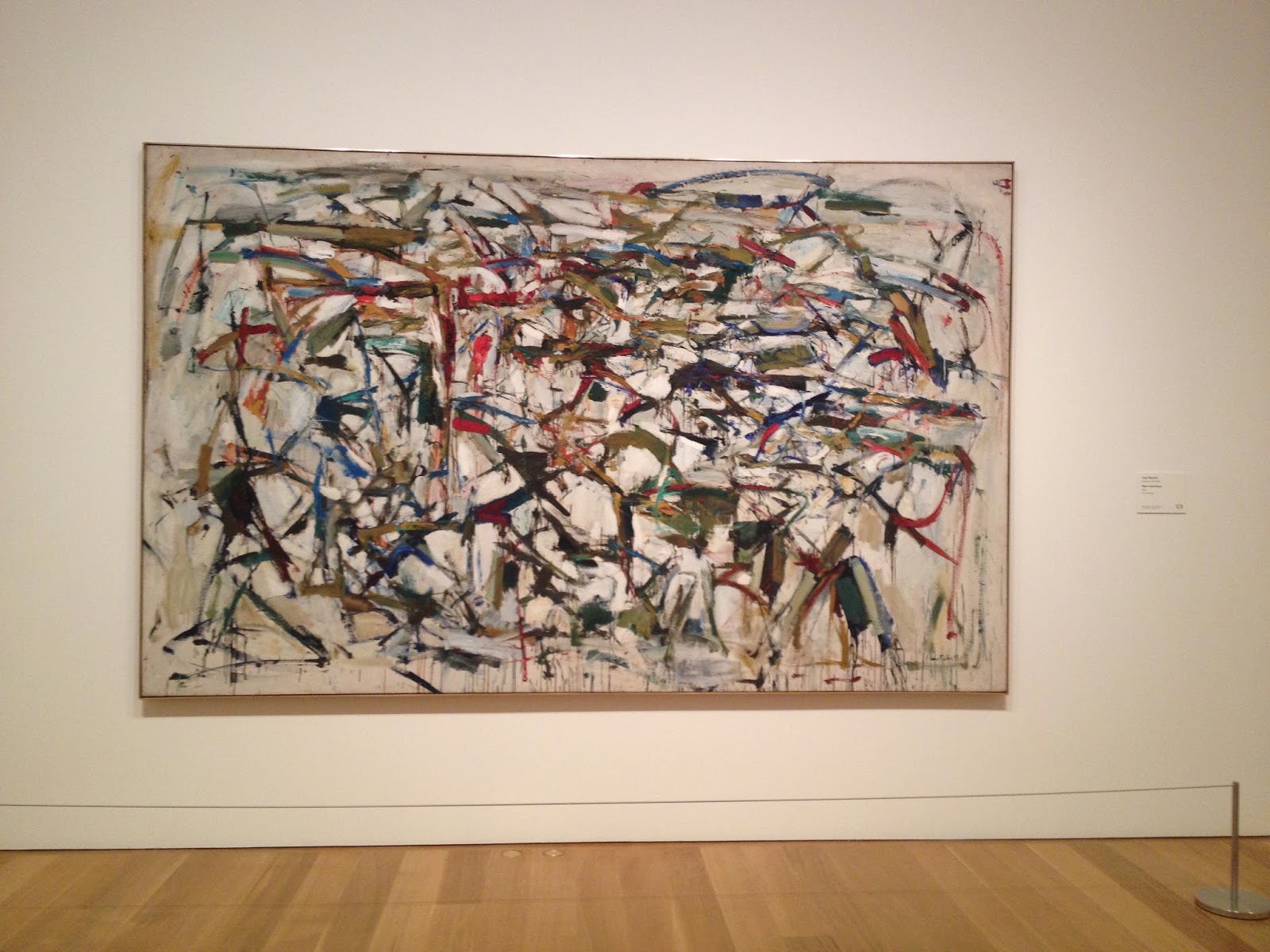 and this rather odd piece by a Belgian artist, Marcel Broodthaers, Panneau de Moules (Panel of Mussels), 1966...which didn't seem to fit with the other pieces.  Although it seemed to grow on Mark the more we went back and looked at it. 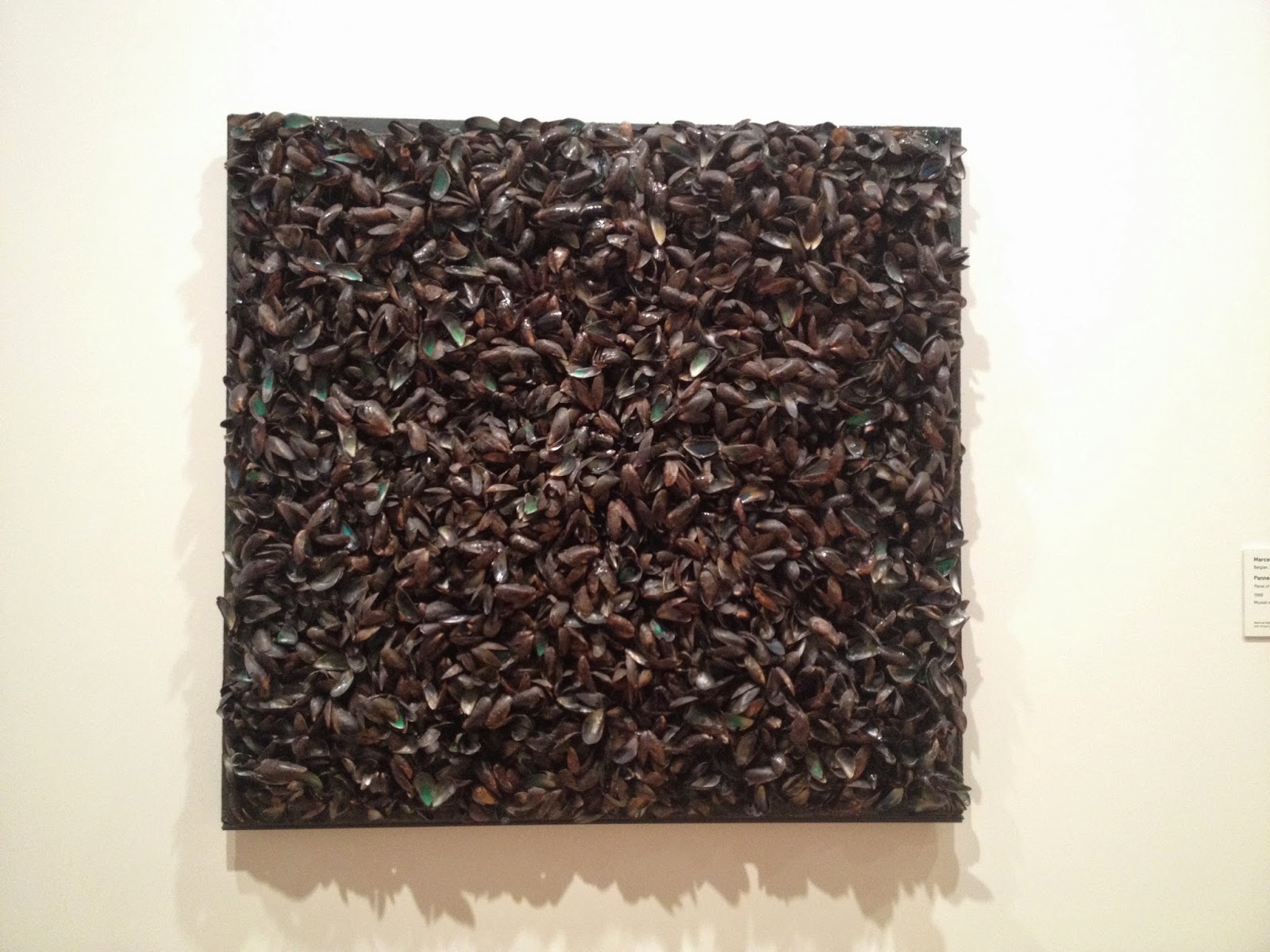 And this one by Yayoi Kusama, Infinity Nets Yellow, 1960 which I was drawn too.  They did a great job with the exhibition and had the paintings hung by a unifying theme, such as pattern, texture, shape and color field.  Definitely worth a trip to the Berkshires if you like abstract paintings from the 50's, 60's and early 70's. 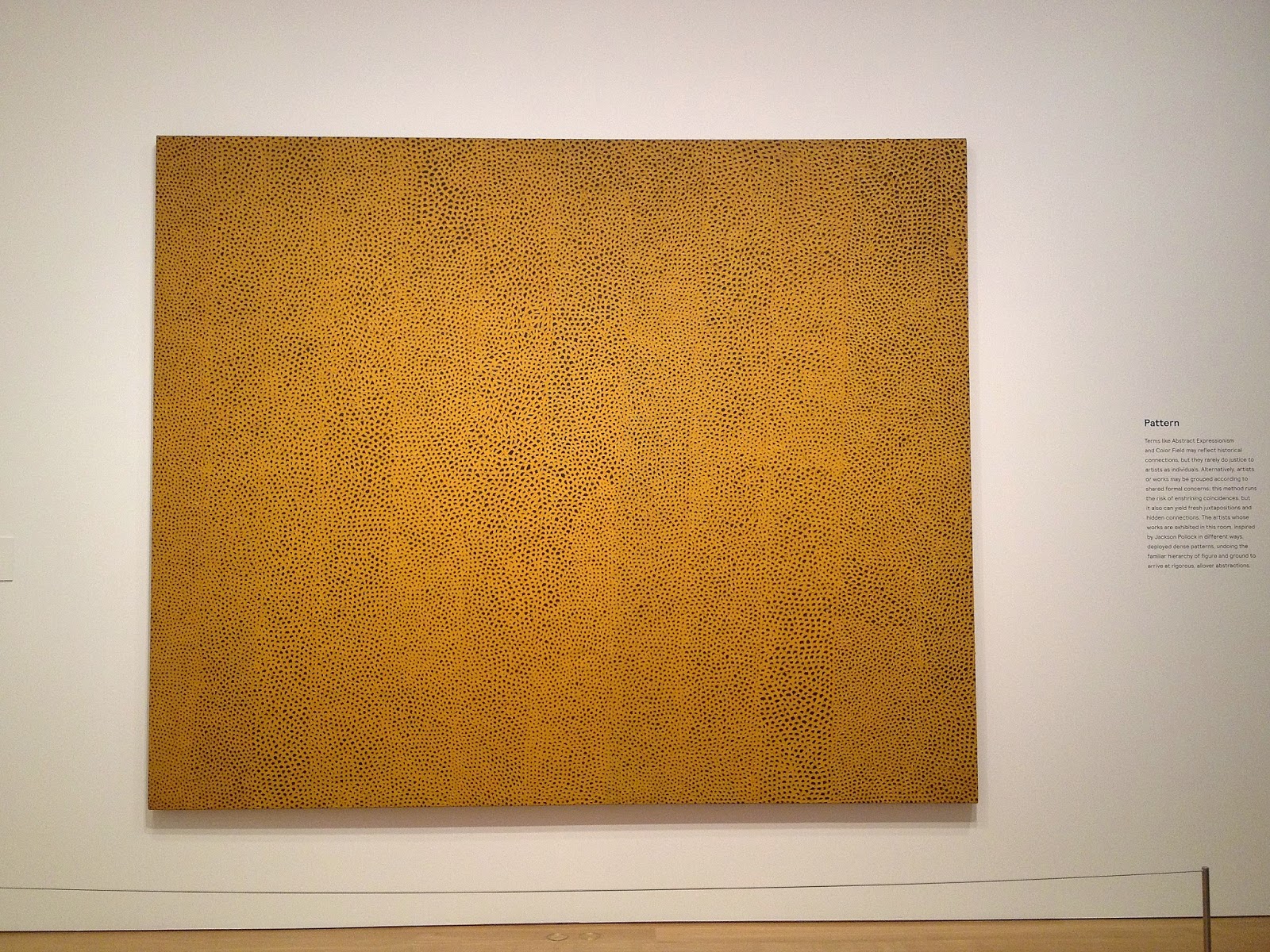 One of the centerpieces of the new museum is the 1-acre reflecting pool designed by Reed Hilderbrand which really seemed to be a focal point for everybody...maybe it was because the day turned out great and people were outside enjoying the area. 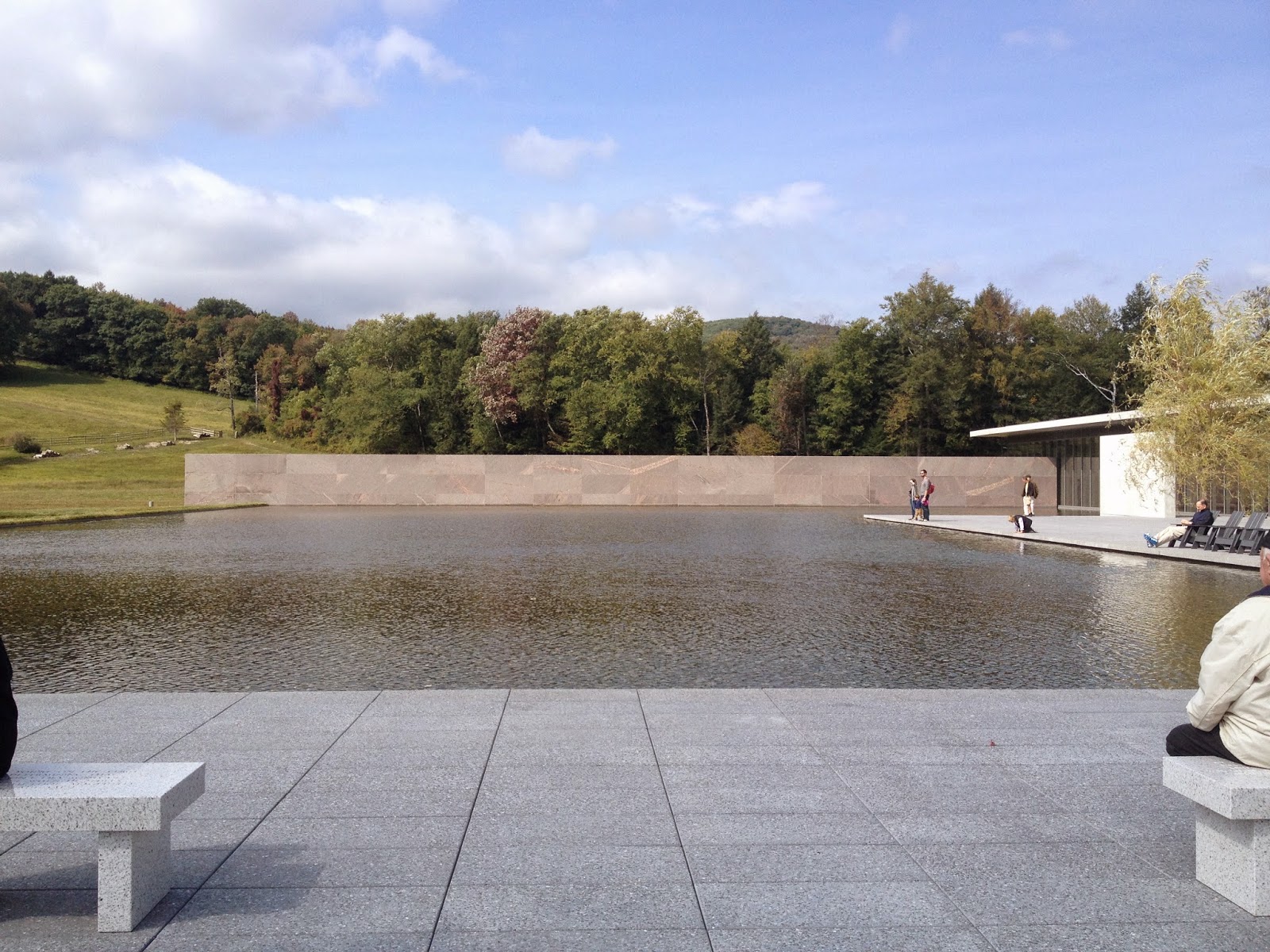 They had 4 benches by one of my favorite artists, Jenny Holzer.  I wish I had copied the quotes carved on the benches, but that will give me an excuse to go back. 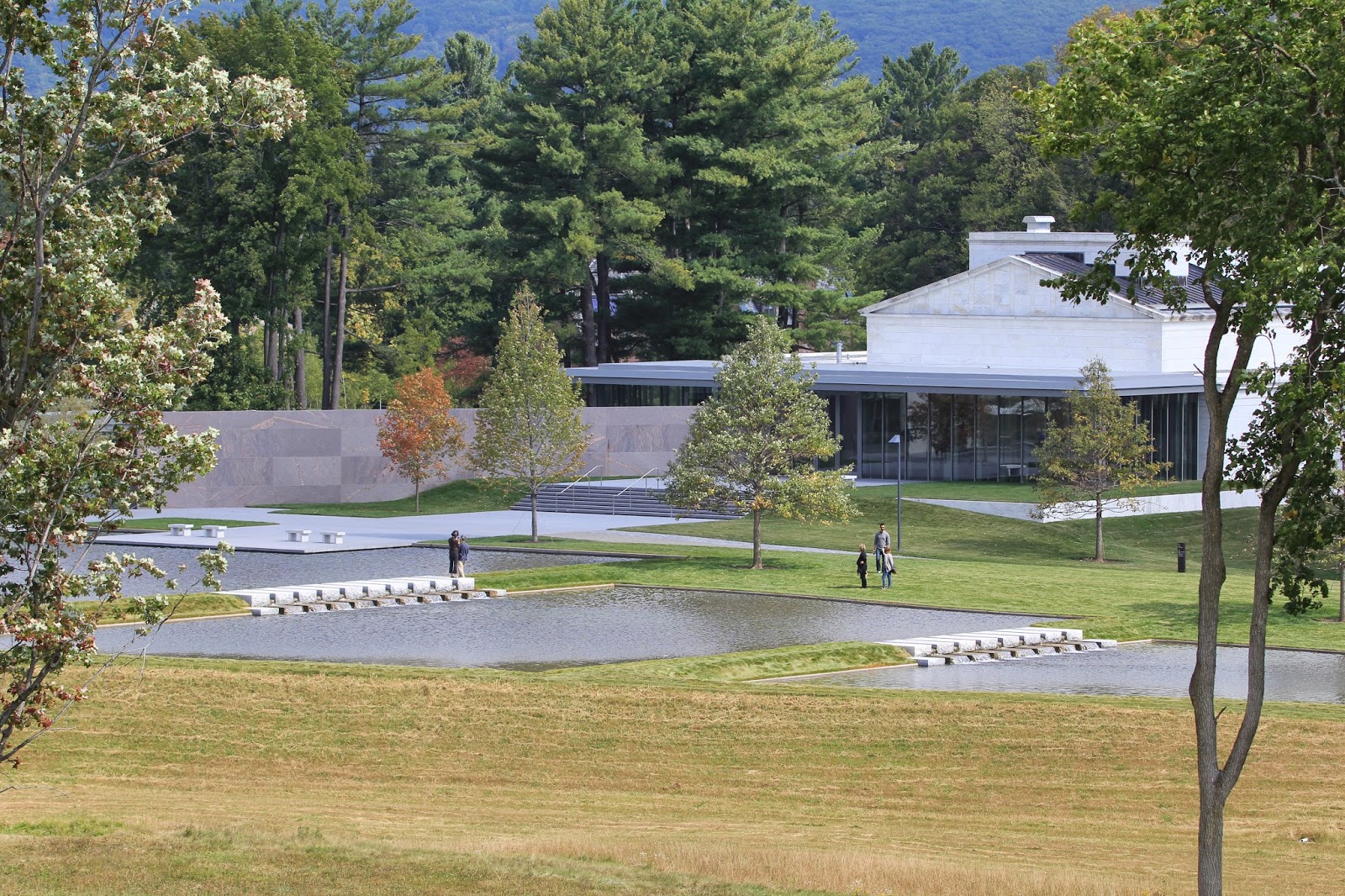 In the photo above you can see the original museum building which houses, for the most part, the permanent museum collection much of which was the private collection of Sterling and Francine Clark (he was heir to the Singer sewing machine fortune.)  One of the special exhibits in this area was called Radical Words and included an original 1215 Magna Carta alongside the Declaration of Independence, the U.S. Constitution, the Emancipation Proclamation, the Declaration of Rights of the Women of the United States and the Universal Declaration of Human Rights.  WOW! 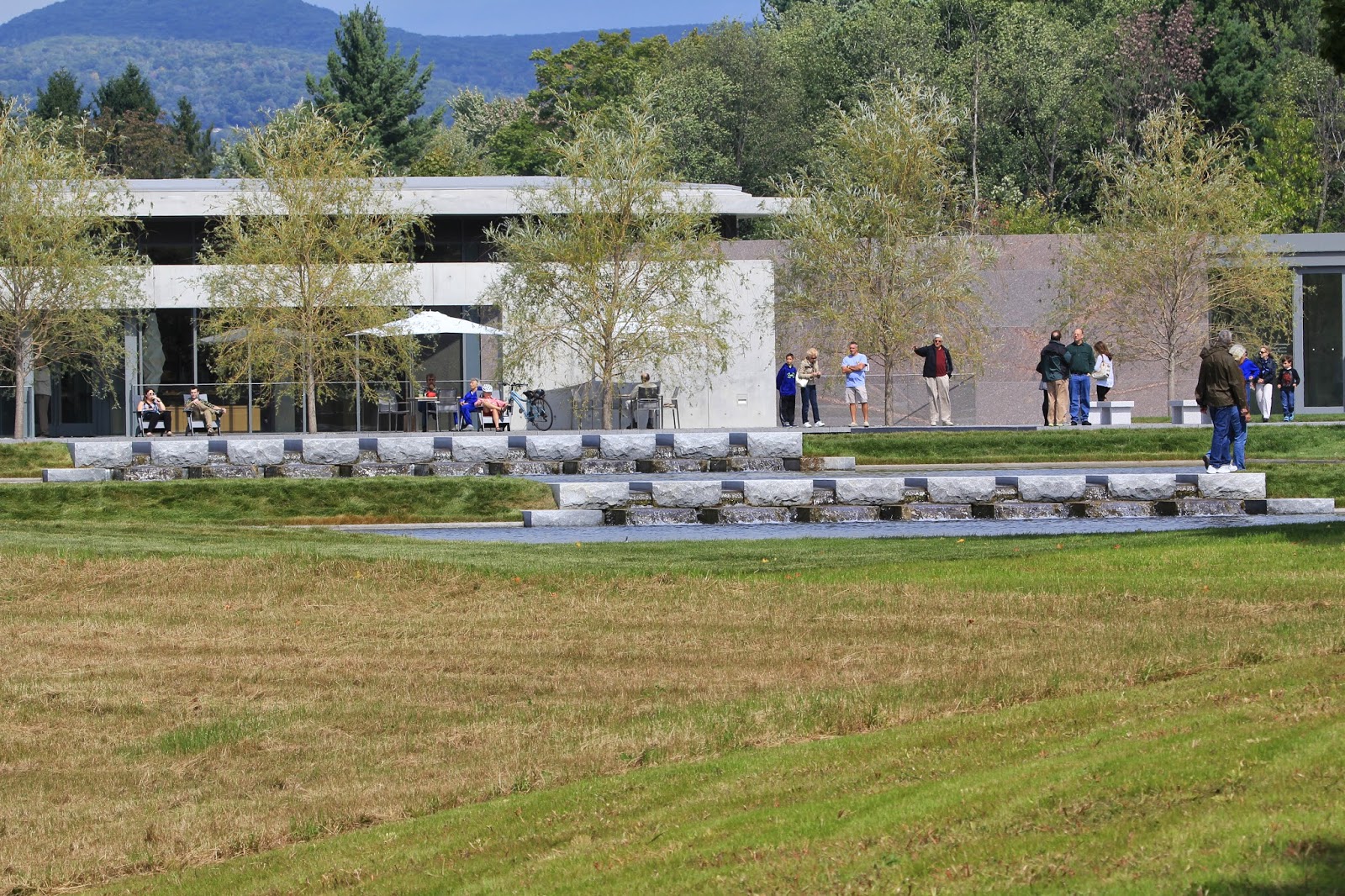 By the time we finished three special exhibitions and took a quick tour through many of the other galleries, my head was spinning.  Mark was totally blown away by their collection of Winslow Homers, George Inness, Remington....not to mention the French Impressionist and tons of others.  Definitely need to go back just to see the permanent collection.  Oh, I almost forgot we did go to a separate museum building on the property called the Lunder Center at Stone Hill which had a special sculpture exhibition called Raw Color:  The Circles of David Smith...amazing.

Finally we took a break for lunch and had a picnic overlooking the hills....we walked one of the trials part of way up to another museum building and along the way had four species of butterflies, even though it was very windy.  Besides the Clouded Sulphur below we had a few Monarchs, many Cabbage Whites and a few Common Ringlets. 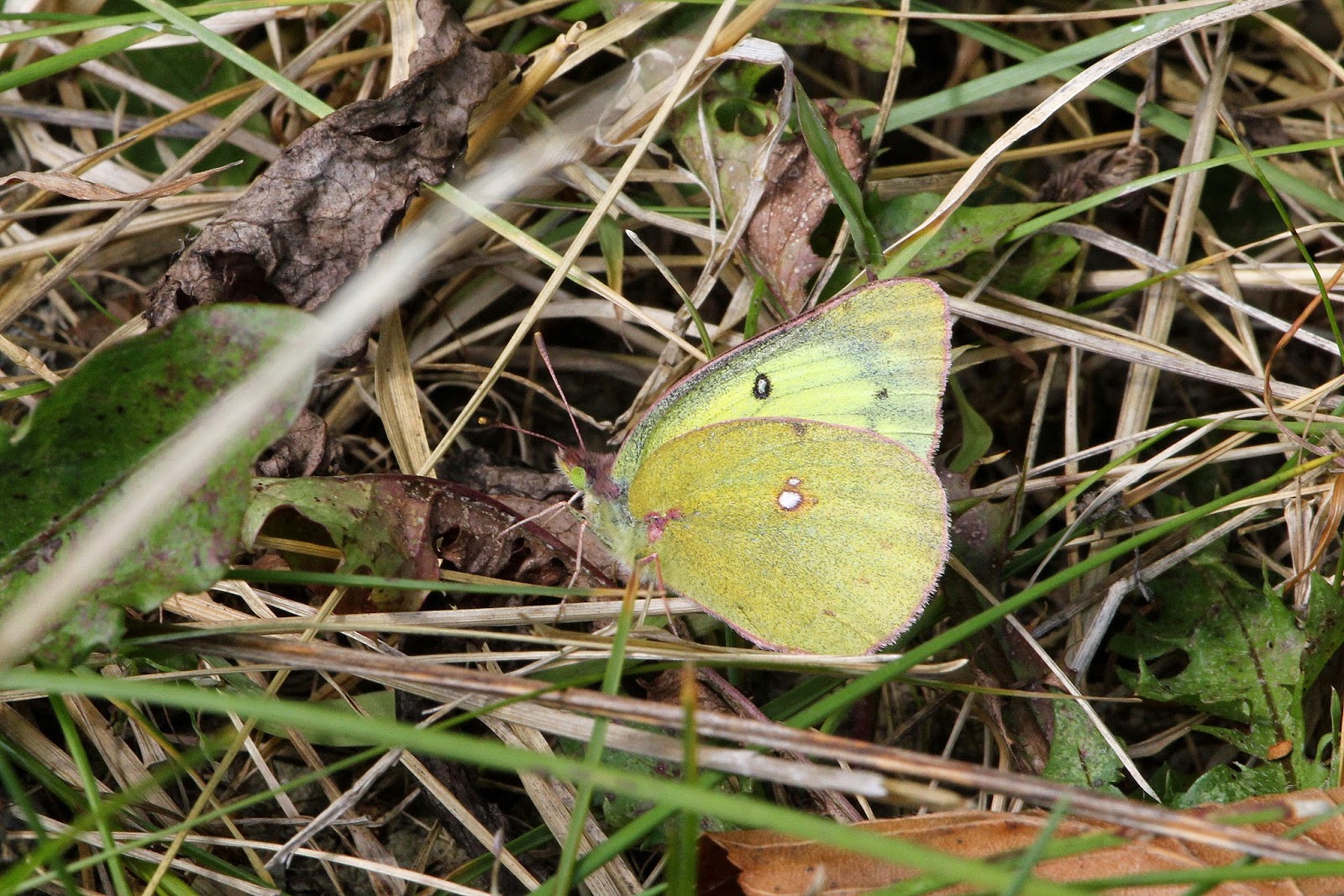 We also had at least two Praying Mantis, but the windy was so brisk it was almost impossible to get really decent photos. 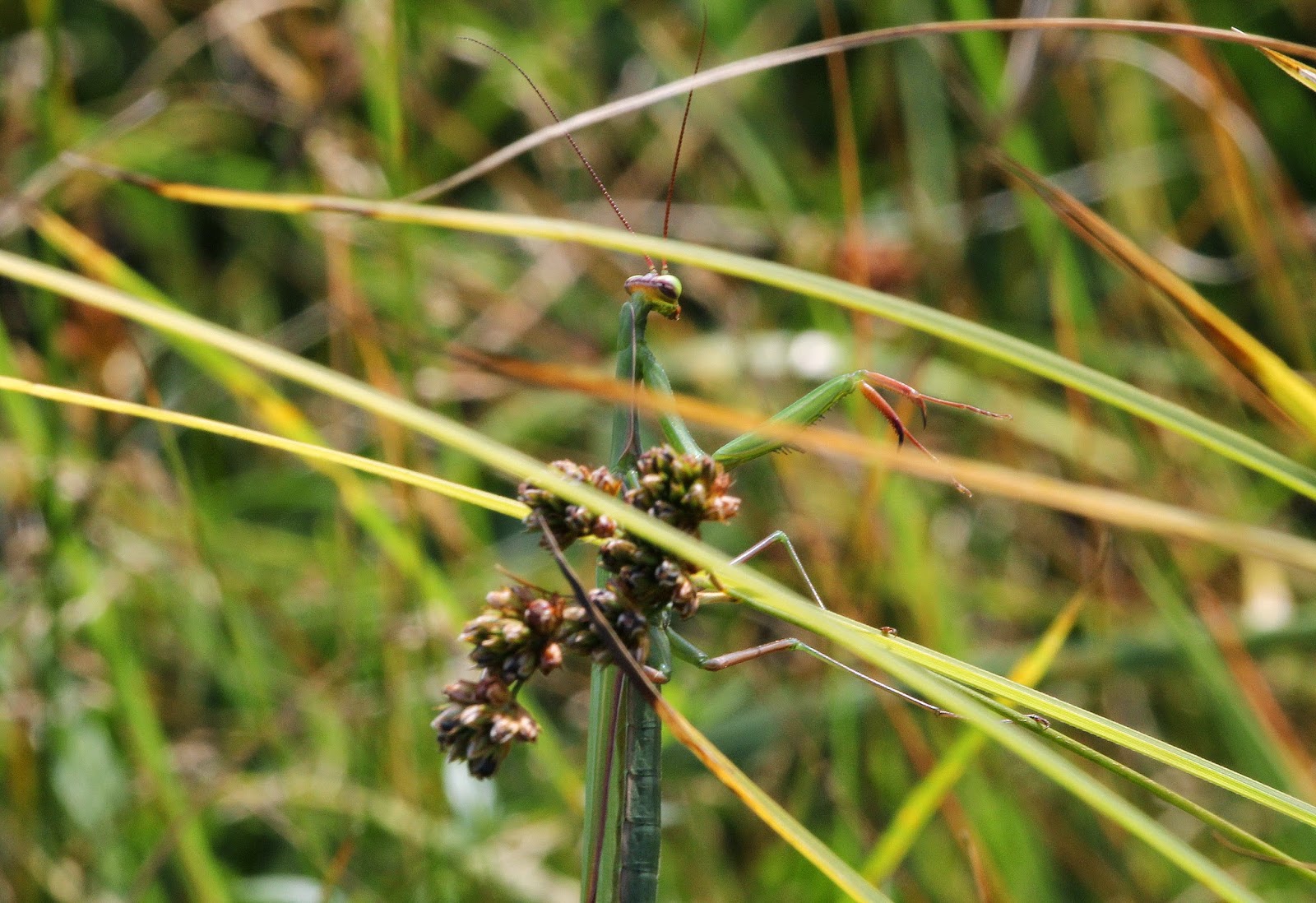 We had this little fall wildflower, Herb Robert, as we were returning to the museum reflection pool. 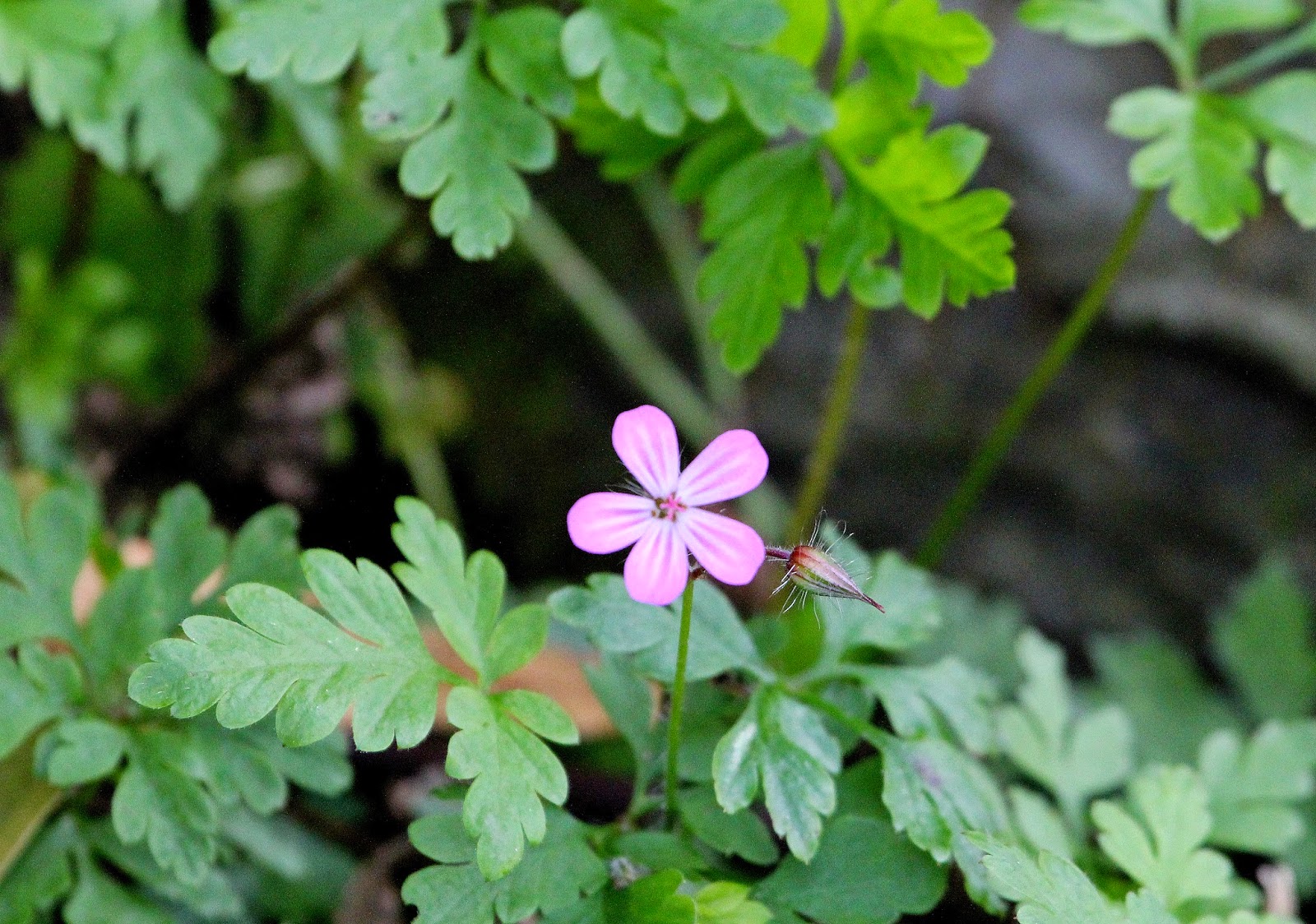 And we came across this nest of the Mud Dauber wasp in one of the trees. 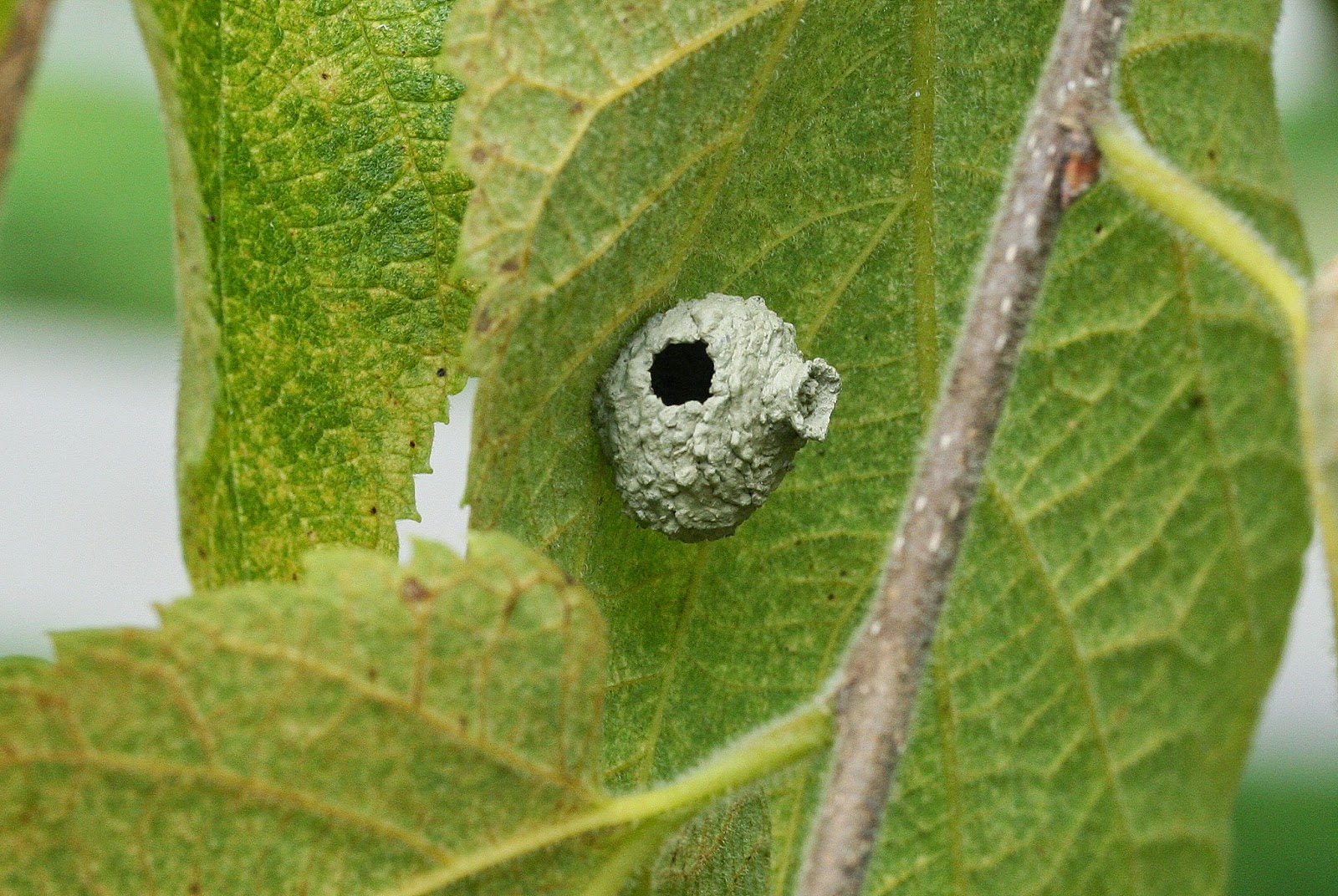 They also had a great pond on the property and once the sun warmed things up a bit, we found lots of odonates breeding -- I'm still trying to identify this pair of spreadwing species. 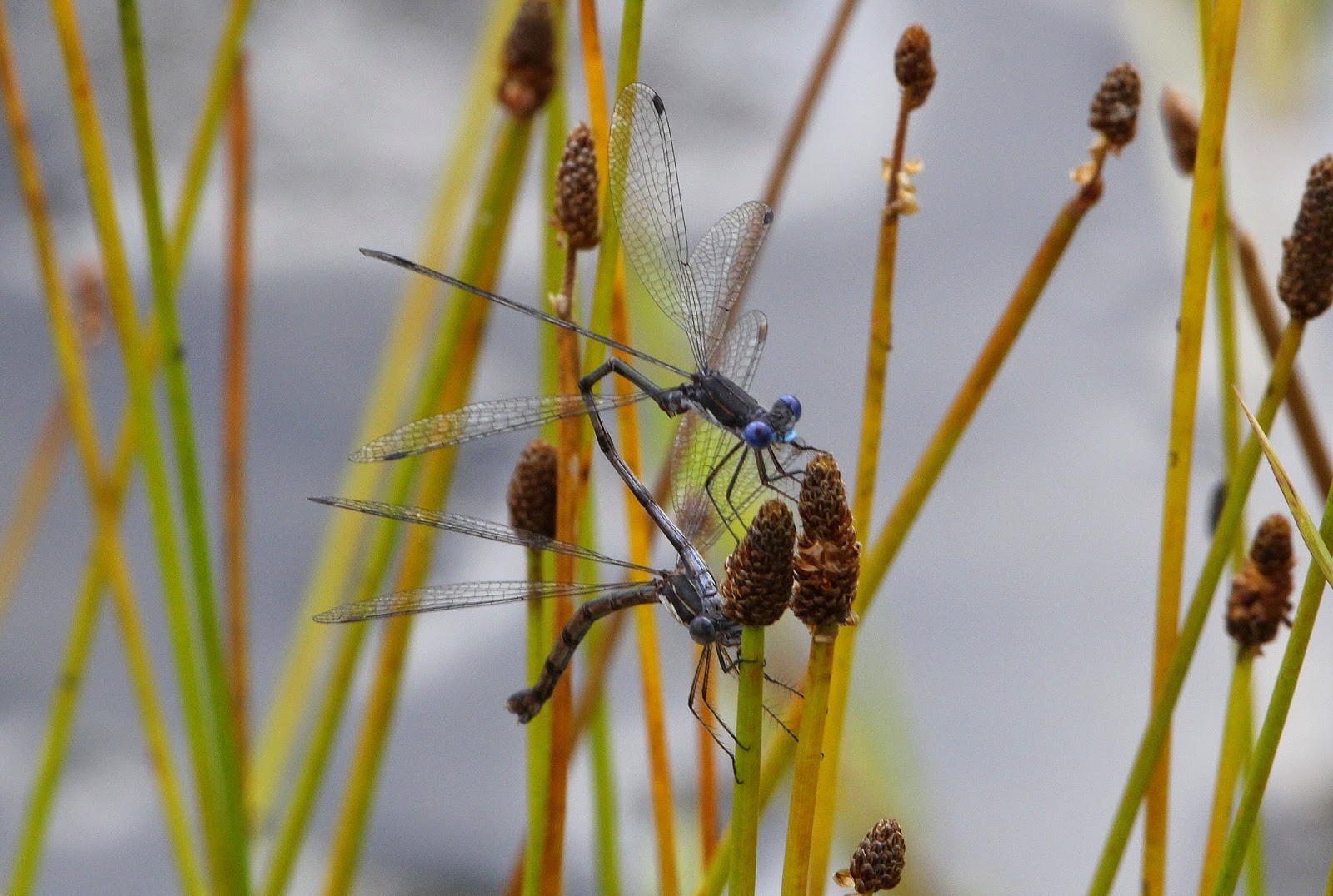 And of course lots of Autumn Meadowhawks zipping around.  And some darners that never put down and I couldn't get a good id on the wing. 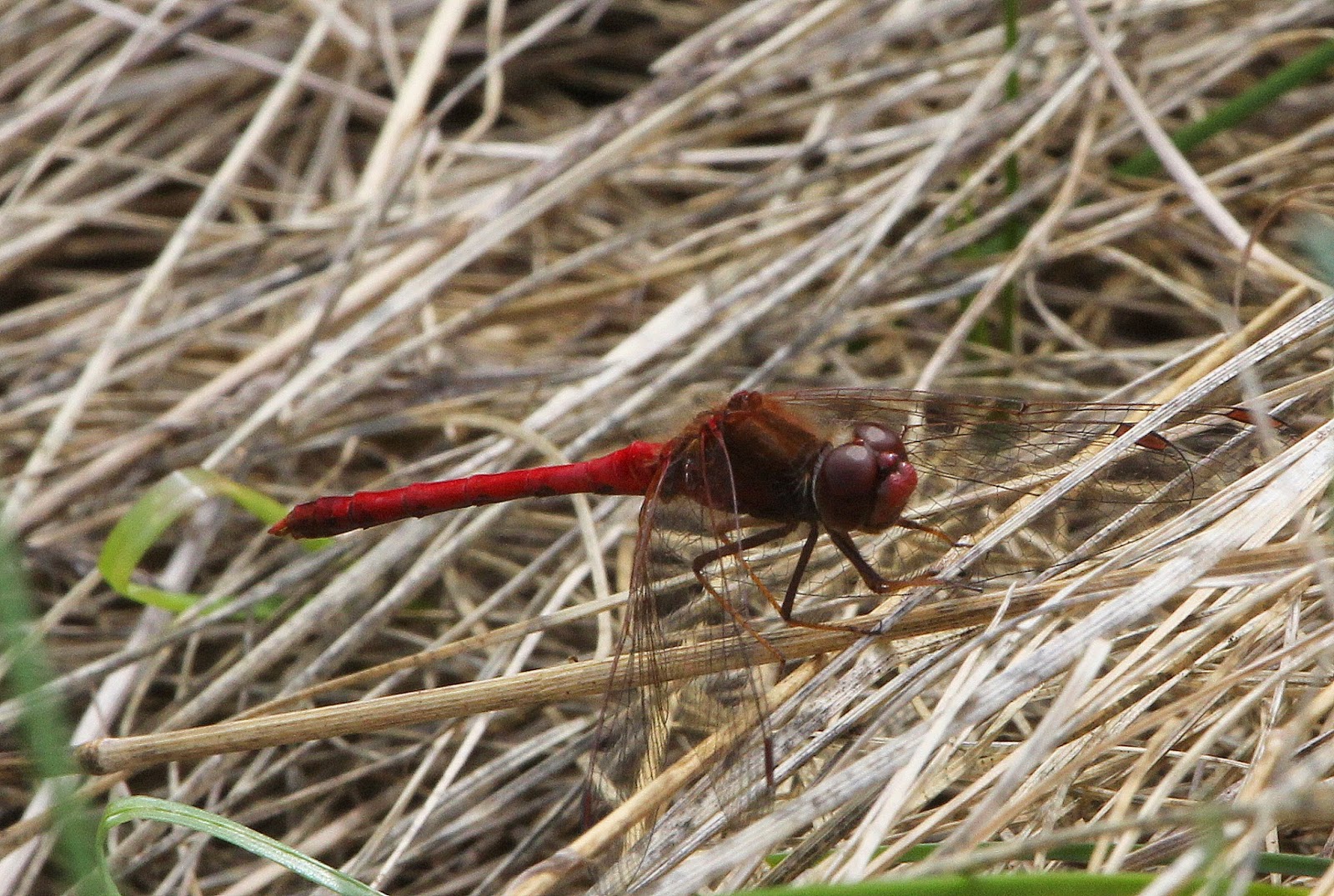 I have to say I was totally impressed with The Clark and will definitely make it a regular stop.  It was such a great place to combine art and nature and the surroundings are fantastic. 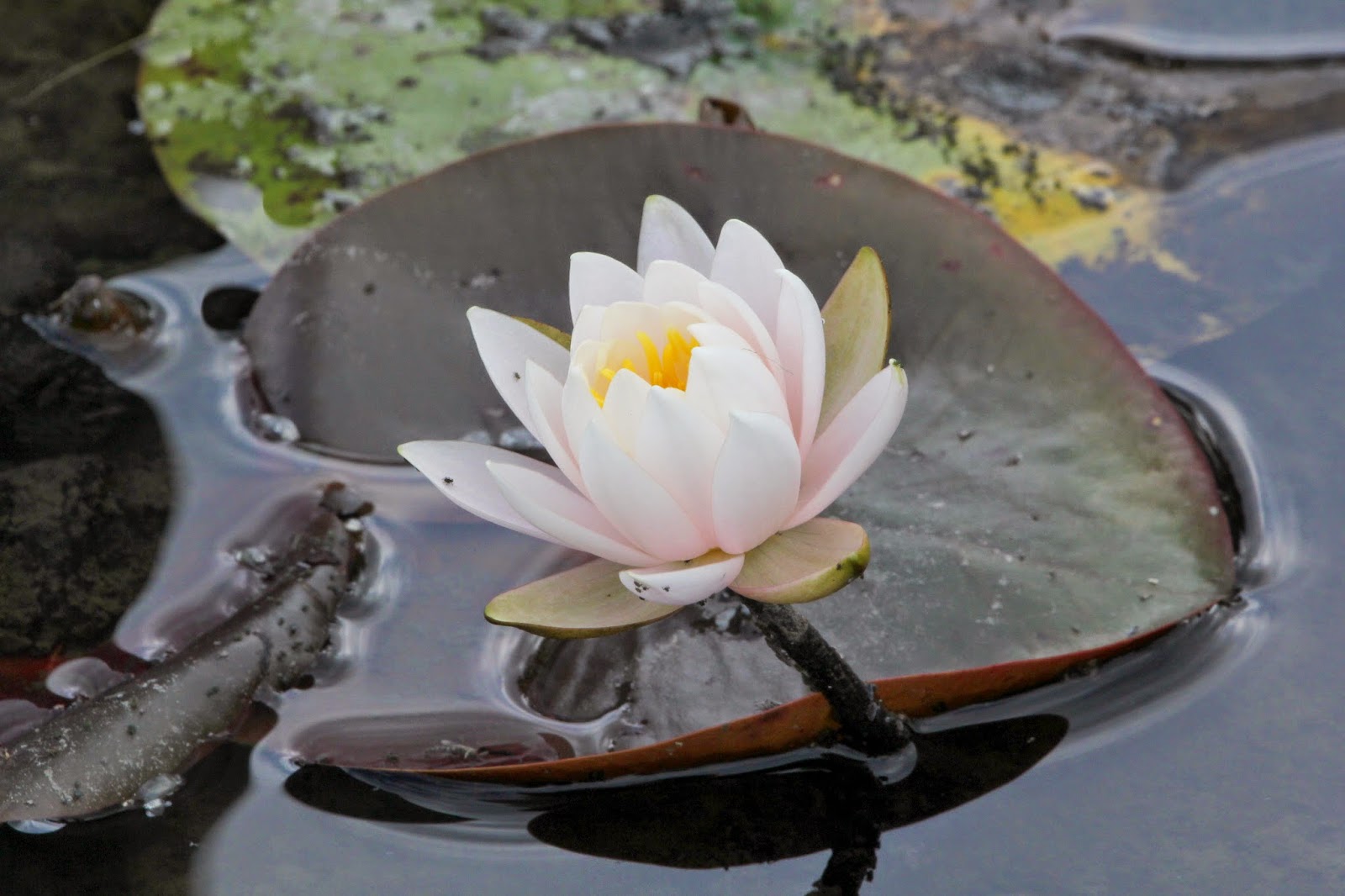 Posted by Sheila Carroll at 1:31 PM