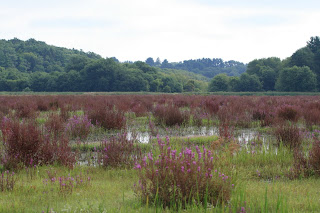 This morning we traveled east to Great Meadows, since there hadn't been many posts from anywhere, and we wanted to check the water levels. And, of course, see if the Common Moorhen was still hanging around. 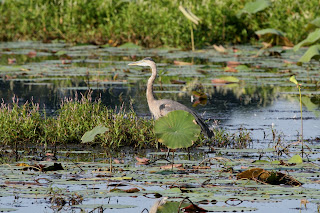 We found a number of Great Blue Herons, Green Herons in all plumages and even a Great Egret which had obviously wandered inland from the coast. 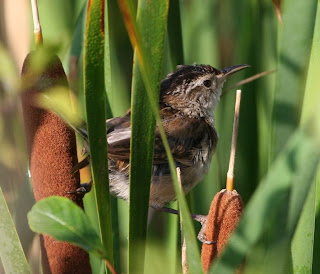 The Marsh Wrens were still moving around in the cattails; although I didn't hear them do their classic call. This young bird was making a sharp chip and with a little coaxing moved into view so that I could get a number of shots off. 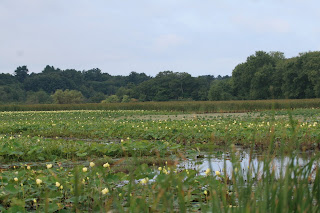 The water level was still high, and although we heard a few shorebirds overhead, it doesn't look like it will be a particularly good year for shorebirds anywhere inland. 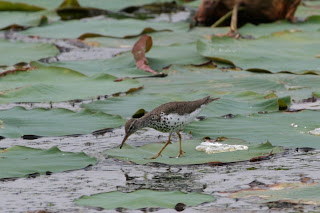 However, one of the shorebirds that was around and still showing some good adult plumage was this obliging Spotted Sandpiper.

I'm always fascinated by their toes...and their ability to walk across a lily pad without causing a ripple. 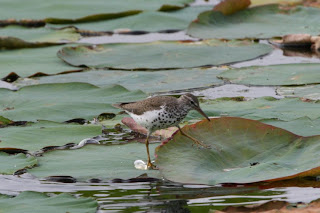 Not to mention their incredible BALANCE! 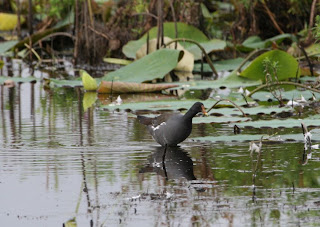 Of course, the looks we got at the Moorhen that has been hanging around since late July made the trip worthwhile. 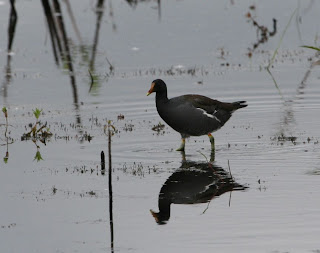 I do remember when they used to breed at Great Meadows (I know I'm dating myself) but after such a long absence, it's nice that they've been making an appearance over the last several years.

Of course, part of what makes photographing birds fun, frustrating and always bringing you back is the "missed shot". Today mine was the Least Bittern that flew 6' in front of us TWICE! I haven't been working with a digital camera long enough to make taking the shot second nature....or maybe I'm still so much of a birder that I automatically raise my binoculars instead of my camera.

All in all, a wonderful morning at Great Meadows!
Posted by Sheila Carroll at 1:30 PM