Bears, Balloons and Birds = The Berkshires

Several trips to both the northern and southern Berkshires introduced us to some wonderful areas for birding. We were checking out several possible blocks for next year's atlas efforts -- both for Mark and me to take, as well as some further-afield block-busting efforts. Our trip to the Sandisfield, New Marlborough and Otis areas brought some great farms and lots of ponds....although bird life was a little on the quiet side. 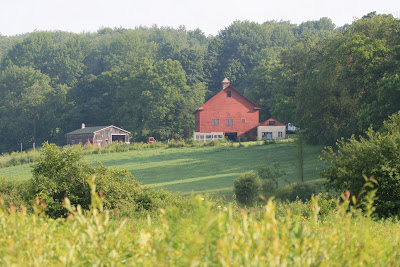 It will be fun to see if this Belted Kingfisher has a burrow nearby. 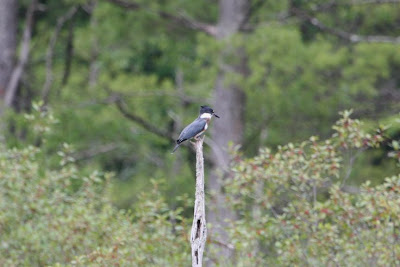 And we certainly saw Great Blue Herons coming and going....so we'll have to keep a sharp eye and ear out for those small, hidden "rookeries". Sometimes we come across as few as two nests in some of the more out-of-the-way marshes. 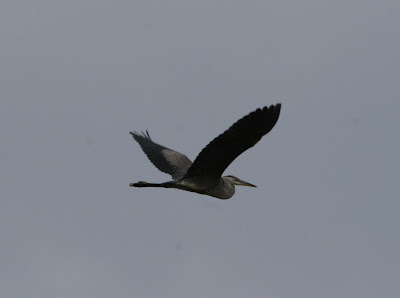 In addition to lots of open fields, there were some quite beautiful wooded areas, with streams meandering through the understory. You just know there will be Louisiana Waterthrush and Winter Wren singing in the spring in this area. 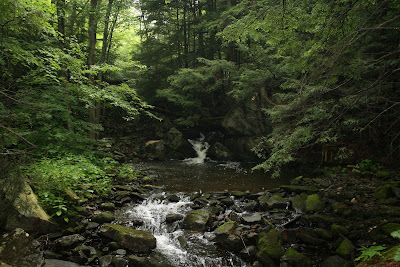 Most of the species we did see were birds in family groups and quite noisy. This Yellow-bellied Sapsucker was making a racket, although it was totally camouflaged on the bark when we did find him. 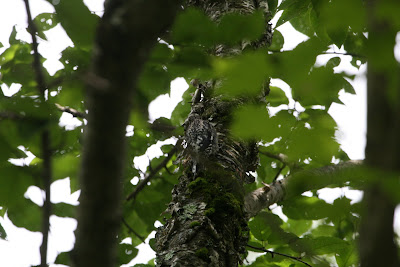 And, of course, our best sighting in this area was this HUGE bear running across the street in front of our car. It was big, and I probably should have been a little more careful when I jumped out with my camera to try to get a shot before it totally disappeared into the woods! 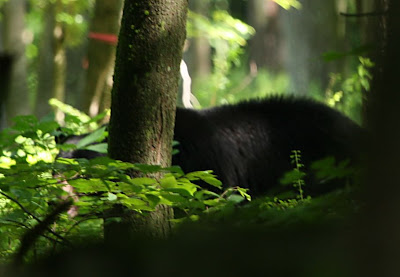 We also came across the Green River Festival in and around the Greenfield, MA area as we were heading out Rt. 2 to check out the northern Berks. It was relatively early in the a.m. and the balloons were just taking off. 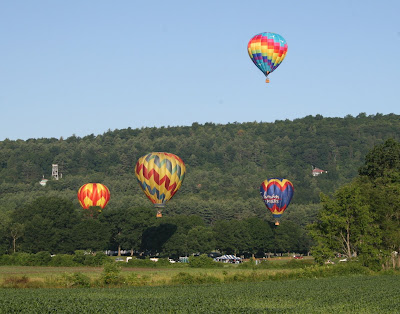 I've always wanted to go up for a ride, but after seeing this one balloon hitting into the trees (and coming very close to power lines) I realized that picking a reputable balloon ride operator is a must. Plus I'm not sure I'll ever get Mark to agree after watching a rather hairy landing. 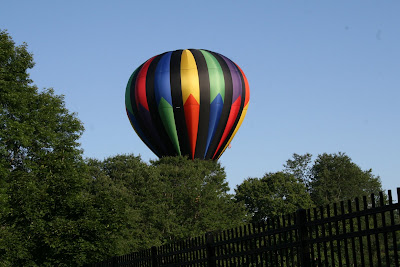 One of the things I've come to love about the Berkshires is the amount of plant life you come across. This huge field of Crown Vetch was not only colorful, but also alive with all sorts of insect life. 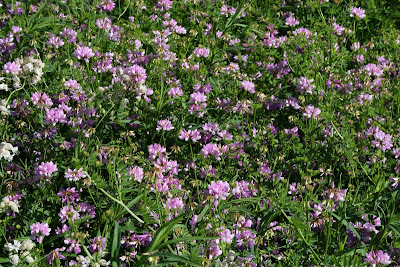 And this Eastern-tailed Blue was just one of the butterflies we came across in the Monroe area. 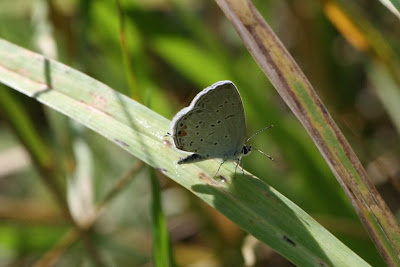 At the Whitcomb Summit in Florida, Mark convinced me to act like a total tourist and get this shot of The Elk. At least I can add it to my collection of schlocky tourist attractions and garden trinkets. 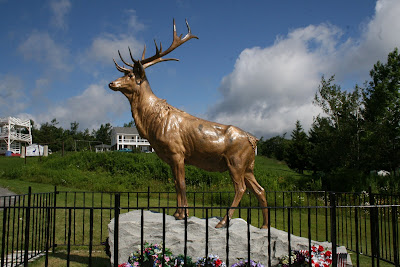 But once you get off the beaten path, and poke around back roads, you do come across some pretty amazing views. This one is from some DCR property at the top of Mt. Raycroft. We used to go there 20+ years ago to look for (and find) Mourning Warbler, but over the years the road hasn't been kept up and people were definitely discouraged from going there. Recently, though, it's been improved somewhat so it was quite nostalgic (and a little romantic) to find ourselves at this same some again. In fact, this was where we had our first bear sighting in Massachusetts. 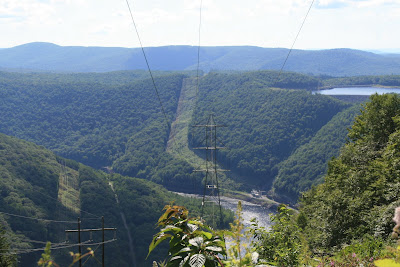 All along the road we came across lots of Fireweed, which I don't recall seeing outside of the Berkshires, although I'm sure it's in other places. It just seemed to be everywhere along recently disturbed power lines. 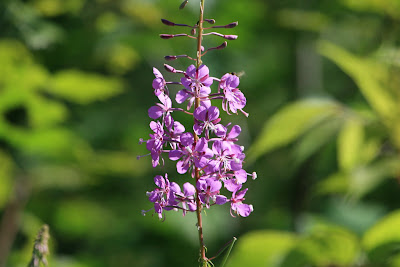 And while we didn't find a Mourning Warbler, there were other good representatives along the power lines, like this male Indigo Bunting. 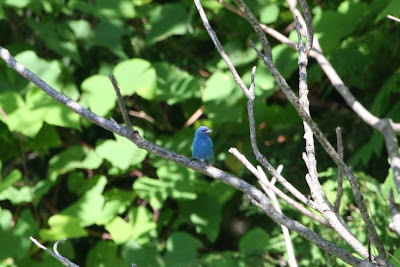 This Ovenbird was definitely agitated when we stopped to spish.... 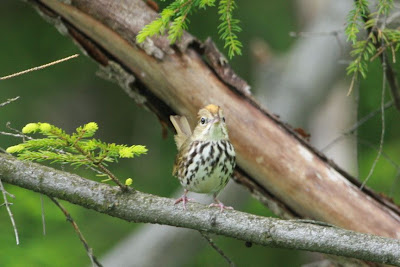 ....and this very young Chestnut-sided Warbler was curious as well. 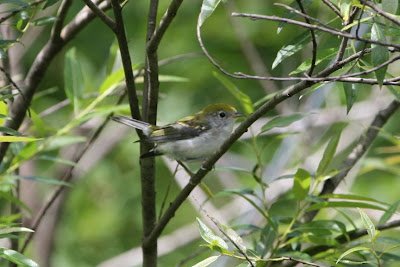 Since we were in the neighborhood (sorta) we had to stop in Adams and see if the Black Vultures were still at the farm along Walling Rd. And they were! 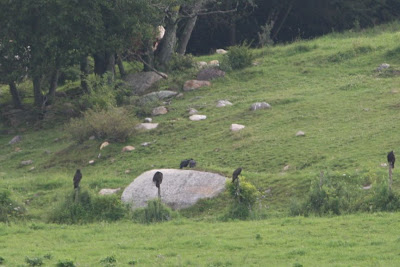 The pair was actually on a large rock at the back of the fields preening and grooming each other! The numbers of Turkey Vultures continue to be outstanding at this one farm as well. 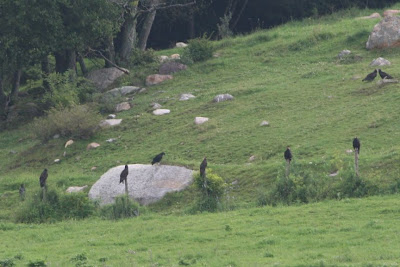 We spent about 2 hours parked by the side of the road in this one spot, waiting for the Black Vultures to go up. 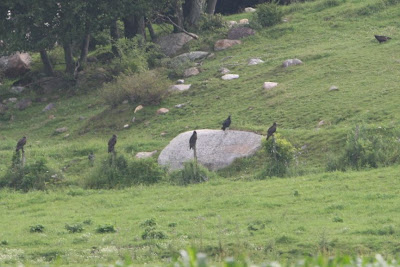 Unfortunately, they stayed on the ground. Most of the TV's took off though. 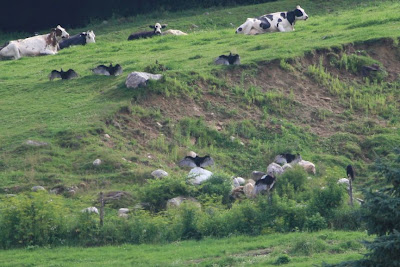 And you could always tell when they were getting ready to go up -- they spread their wings just like a cormorant drying their wings and then took off in 2's and 3's. 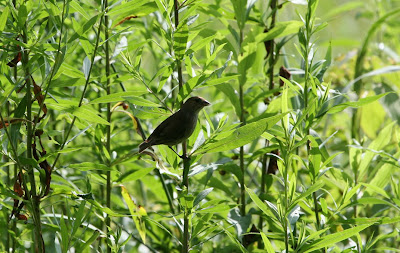 There was also an newly-fledged Indigo Bunting in the cornfield right next to where we parked. And later on we came across a recently-fledged Eastern Phoebe that was still begging to be fed. 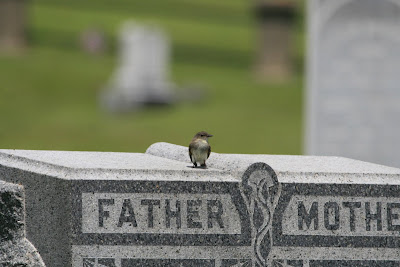 In the Cheshire blocks we're looking at for block-busting, we came across a very busy mud-dauber wasp gathering just the right kind of mud for his nest. Now bees and wasps are not my favorite creatures, so standing still enough to get this photo was a feat in and of itself! Clearly this creature was so intent on what he was doing, he didn't give me a second thought. 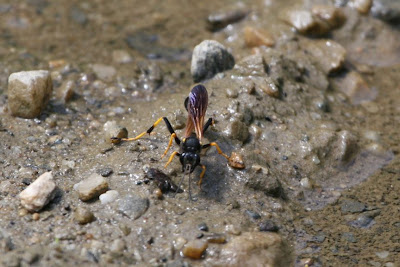 As we continued to check out side road and back roads in the area, we came across a family of Ruffed Grouse crossing the road. The mother was on one side and obviously calling her "teenage" brood to follow. The young birds were quite slow and cautious crossing the first part of the road, but as soon as they had the other side clearly in sight, they ran. 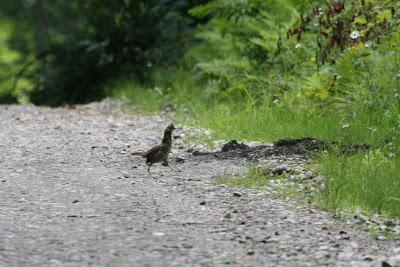 As we approached the area where we had seen the mother and 3 birds duck in, we were surprised by the male grouse doing quite an exotic distraction display. 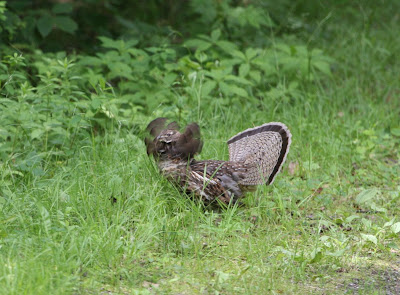 And these are just some of the reasons why the Berkshires -- both north and south -- continue to be one of my favorite places to bird in the state.