After the dearth of birds in the northern Berks on Saturday, we decided to go to Plymouth to look for the Redhead and then poke around to see what else was happening. I was really interested in seeing if the huge numbers of Common Eider at the mouth of the canal in Bourne meant less eider in Plymouth -- which is usually a winter stronghold. 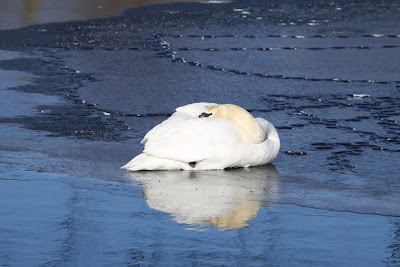 We arrived in North Plymouth right on the border with Kingston and looked for the Redhead in the small pond on the right side of 3A in the Cordage Park industrial park. Most of the little pond was frozen and there were only a few Mallards and two Mute Swan taking a siesta. 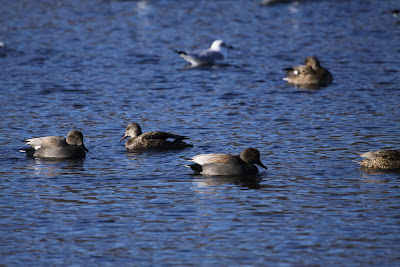 But across the street in Spooner Pond there were plenty of waterfowl, including good numbers of Gadwall, coot, Mallards, geese and swans. There was some ice near the southeast corner of the pond, but the Mallards were milling around where there were some locals feeding them. There was a birder/photographer there as well whom we didn't recognize. 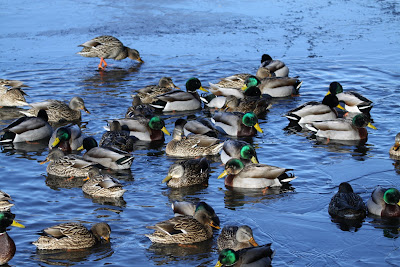 And a beautiful drake Redhead. 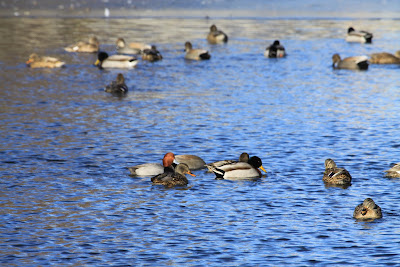 For a while the duck stayed close to the edge of the pond nearest the road and provided some great views and some great photographs as well. However, after about 10 minutes the local duck feeders left and the birder/photographer used the opportunity to walk around the front of the nearby building, go through a gate in the fence to get even closer and FLUSHED the Redhead to the back of the pond! I was disgusted to say the least. And really not because I couldn't get anymore shots, but I wondered about the other birders who might stop by this nice Sunday morning and would only get somewhat distant views thanks to "Mr.-I-don't-care-about-anyone-else-but-me" photographer. So if you happen to see killer, close-up shots of the Redhead from Sunday, February 7th, you'll know who the jerk was! 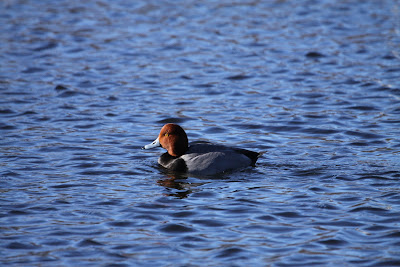 So deciding not to let this ruin a beautiful morning, Mark & I decided to head down to the areas in Plymouth where we usually bird. Our first stop being the playground on Nelson St. just north of the jetty where the Ivory Gull appeared last winter. We had a small flock of Brant grazing on the ballfield as usual, but the numbers seemed lower than in past winters. And the same could be said for the gulls in the area. 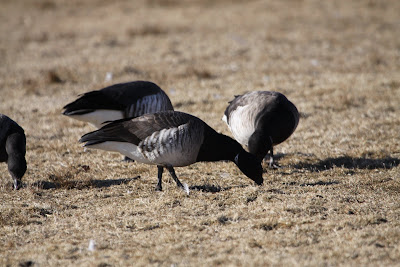 We did have a smattering of Dunlin along the shore as the tide was going out..... 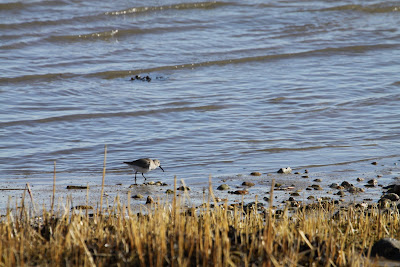 and more flew in to join them as some of the flats became exposed. 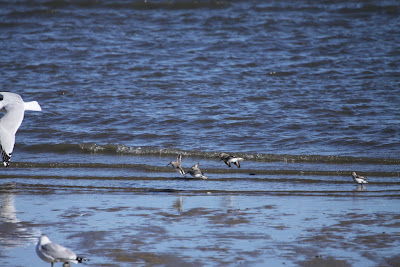 It was obvious these guys were looking for their Sunday morning breakfast. 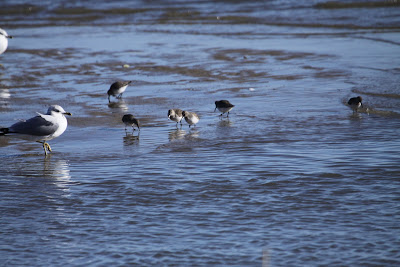 At one point I saw a Ring-billed Gull madly chasing a Dunlin (who had found a long sand worm) trying to force him to drop the tidbit. After a chase of about 3-4 minutes with the Dunlin frantically trying to avoid the gull and wheeling in and out of flocks of other Dunlin and other gulls, the tired shorebird finally gave up and dropped the worm. It was a fascinating example of kleptoparasitism on the part of the gull. 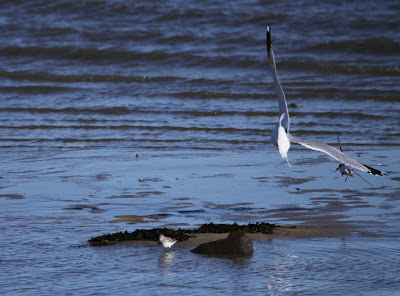 Everything finally settled down, but it seemed a little unfair since the gull was certainly big enough and able enough to go get his own food without stealing from the little Dunlin. 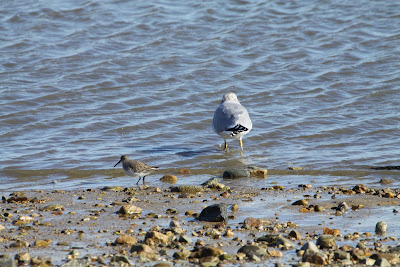 There were no unusual gulls, a good number of Dunlin (90+) but not a lot of ducks, so we left the area after checking the water along the jetty and headed south of Plymouth center to the Stephen's Field ballpark area -- a place where we've had good success with Lesser Black-backed Gulls in the past. But that, too, was pretty quiet. We had a nice flock of Brant mixed in with Mallards and it gave a great size comparison between the two species. 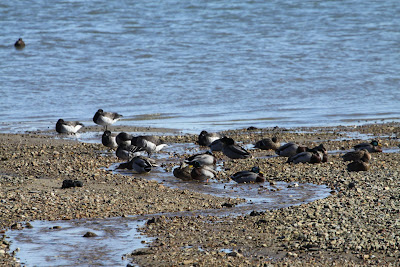 We decided to check out the former duck-feeding pond behind Jenny's Grist Mill Museum on Spring Lane off of Summer Street near the John Carver Inn. Sure enough we found the Lesser Black-backed Gull on the lawn on the far side of the pond. This has to be about the 10th year that this bird (or another LBBG) has wintered on this pond. The bird only stayed for about 5-10 minutes before flying off (probably to Stephen's Field) but there were several species of ducks at the pond as well. 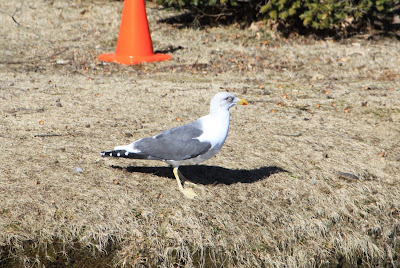 If you enlarge the photo of the Buffleheads below you can see the great colors on the males' heads as they caught the sun while swimming along. 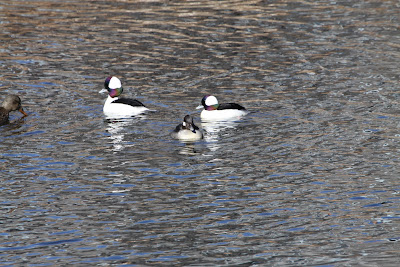 There were also lots of Gadwalls as well -- both males and females in great spring plumage. 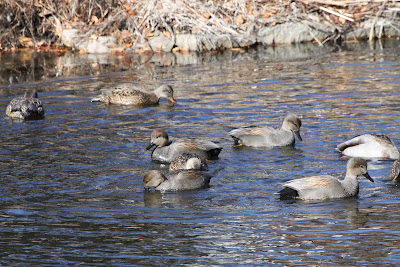 And a small number of Ring-necked Ducks too. See the birds this close really gives you an opportunity to study all the fieldmarks outlined in your field guide. 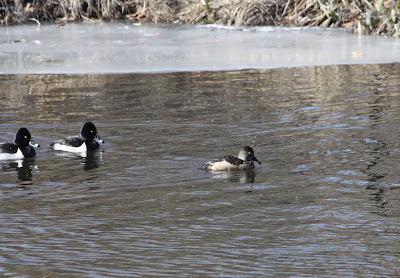 Before heading out of the area, we decided to check the harbor again looking for any unusual ducks, but also because Mark wanted some digital shots of scenery and some of the tourist attractions. Believe me taking a photo of this absurd rock in the Plymouth Rock monument made me look like such a dorky tourist. In fact, I'm beginning to wonder if Mark really wanted the shot or just enjoyed me looking like a dweeb! I have to believe that EVERYONE who comes to Plymouth and sees this rock must go "Huh, that's really where the pilgrims landed? I don't think so...." 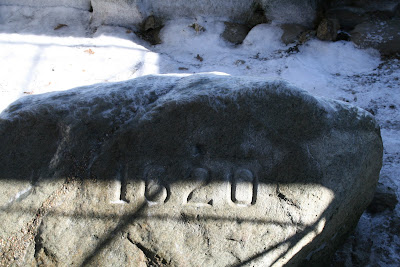 And, our course, there's Massasoit......who looks great outlined against some of the older homes up on Carver Street. 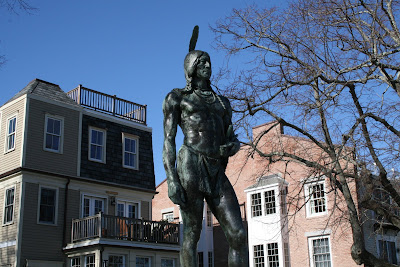 Or looking out over Plymouth Harbor once you go up there. I do wonder how many people climb the steps all the way up to Carver St. We, of course, just drove down one of the small one-way streets and pulled right up next to the park! 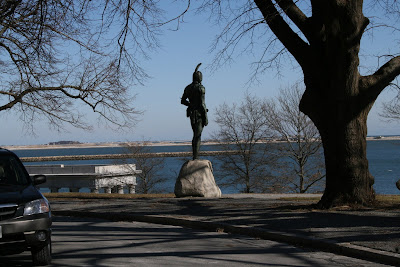 Before heading back to central Mass, we did do a check looking out from the closed restaurant at the entrance to Plymouth Beach. There were very, very few birds on the ocean. 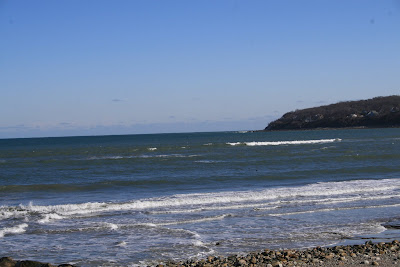 As it turned out we had about 45 species for the day. It was interesting to note that with only 800+ Common Eider, the most common ducks were Blacks and Mallards -- both species outnumbering the eider by several hundred.

I guess the big numbers have moved down through the canal to Bourne. There must be better food in Buzzards' Bay this year.