On Saturday, January 30th we decided to check out what was going on in the Connecticut Valley. We had heard that there were large flocks of Snow Buntings and Horned Larks in a number of places. And we hoped to find some Lapland Longspur among them. On our way out Rt. 9 we popped into South Quabbin to see if what was around....knowing that the recent cold weather would probably mean many areas would be frozen. 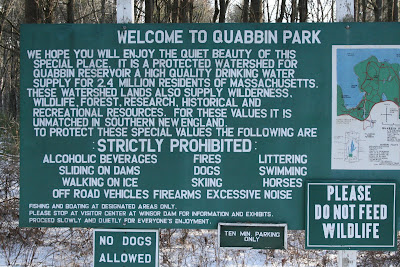 The views from Enfield Lookout and Windsor Dam (below) were picture-perfect -- clear, sunny and very, very cold. Birds, for the most part, were scarce. 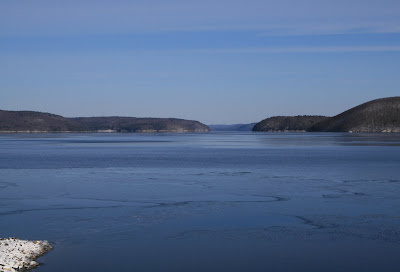 Even though the water in front of the Administration Building had a fair amount of "pancake ice" we were surprised to see a lingering Common Loon. We wondered if it would be able to get out since they need quite a long area to take off and the ice was definitely closing in. 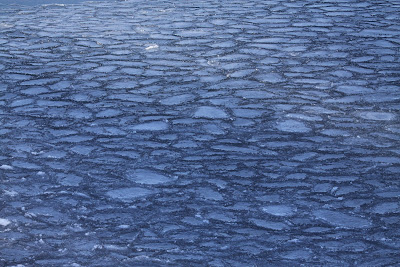 Another trip with no turkeys; although we did have some fairly fresh tracks in the snow. And there lots of Blue Jays moving through the area. 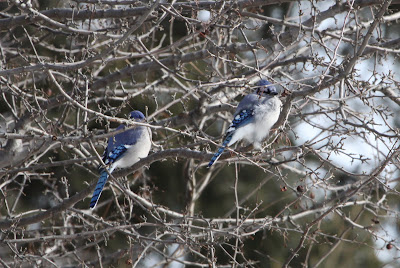 So we headed out through Belchertown and Amherst ending up in Hadley just east of the Rt. 9 bridge across the Connecticut. While searching for Snow Buntings long Aqua Vitae Rd. we had large flocks of Crows feeding in the plowed-over corn....but no buntings. 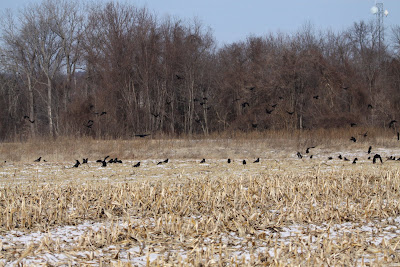 It looked like this Red-tailed Hawk was doing a beer commercial right along Rt. 9 as we headed into the Honey Pot to check on buntings and larks. 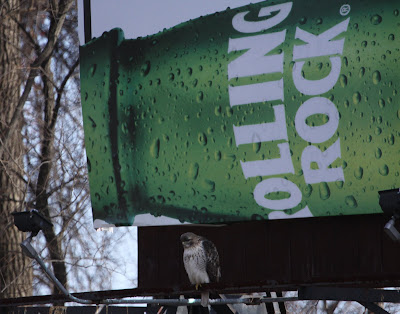 We finally turned up a good-sized flock of Horned Larks, with about 5-6 Lapland Longspur interspersed. The longspur never came close enough for a good photo, but some of Horned Larks were quite accommodating. 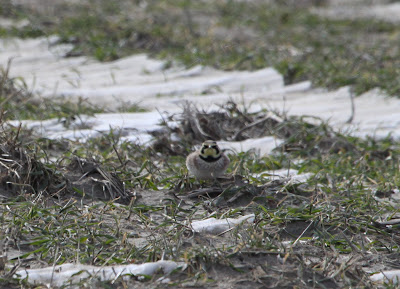 We had some classic Tree Sparrows perching up and then disappearing into the weeds along Cemetery Road, but no Snow Buntings....so we headed across the bridge to Northampton to LeFleur Airport. But again we dipped on buntings. We decided to head over to The Oxbow and check out some of the fields near Arcadia. 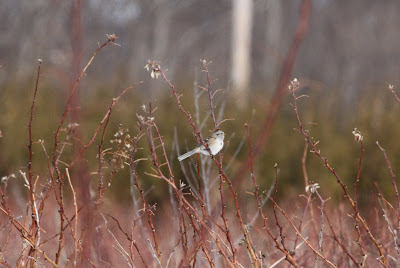 At a stream crossing on Fort Hill Rd. we had a small group of Hooded Mergs.... 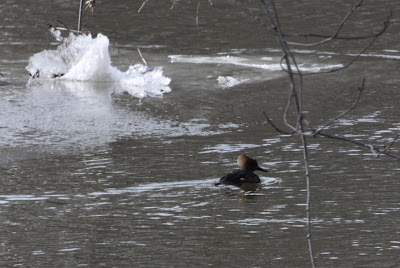 and this pair of adult Bald Eagles were right along the river. 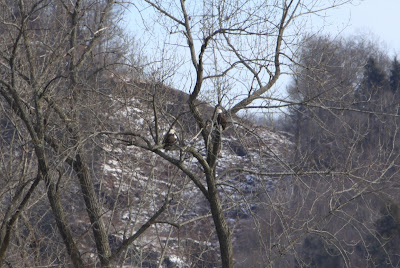 We had a small flock of Eastern Bluebirds feeding near Arcadia. 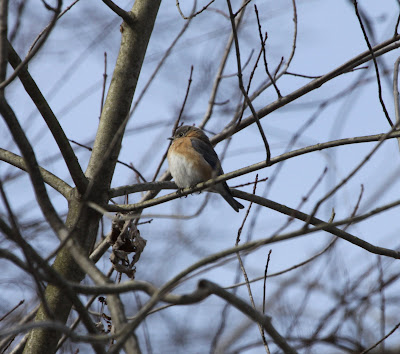 And a nice Mockingbird hanging out in some nearby thickets.

Having dipped totally on Snow Buntings we decided to head back towards Hampshire College to visit the Eric Carle Museum of Picture Book Art. While you may not immediately recognize Eric Carle's name, anyone will small children will certainly know his books -- The Very Hungry Caterpillar and Brown Bear, Brown Bear What Do You See? -- are two that I'm very familiar with having read them numerous times to my granddaughters. 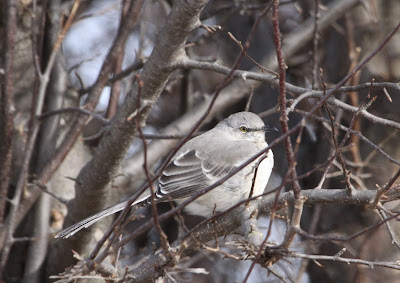 Anyway, there was an exhibit at the museum showing some of the original artwork from the Golden Books -- Scruffy the Tugboat, Pokey Little Puppy, Colorful Kittens, etc., etc. Mark had recently interviewed an author (Leonard Marcus) who wrote a book called The Golden Legacy: Art from 65 Years of Golden Books, and we both wanted to see the artwork up close and personal.

Arriving at the museum we were surprised (and concerned) to see no parking available. The concern comes from knowing that this is a great museum for kids....little kids.....lots of little kids! And there were!!! Our next surprise (this one a pleasant one) was to bump into an old birding friend, John Nove, who used to live on the North Shore, but had relocated to the valley and had opened a book-binding business. Really fun to catch up with John!

And our final surprise (good and bad) was to realize that the huge numbers of kids present meant that some event was about to happen -- and boy did it happen. 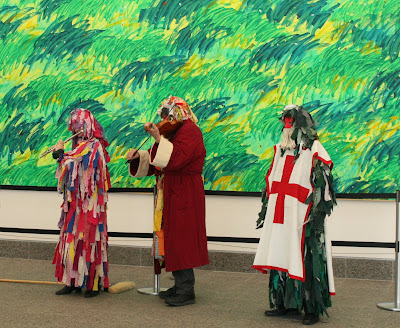 After looking at the show (which BTW was GREAT) we came out into the large entrance hall to find that we had just missed the "traditional" Sword Dancers -- people doing precision moves with swords and quite entertaining. But that was nothing compared to what we were about to see -- some very strange-looking costumed people called Morris Dancers. They, too, were Sword Dancers, but interspersed with little vignettes. 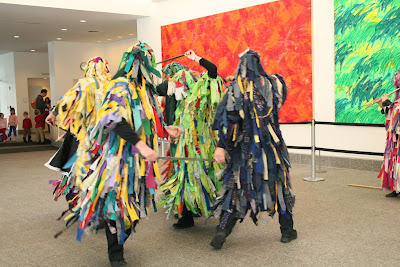 Now if you took a mummer, crossed them with a clown and threw in a dash of medieval fool you get Morris Dancers. You can go to the web and look up the history, but there are lots of different spins on this. All of them seem to involve men in dresses with beards in some form or another. 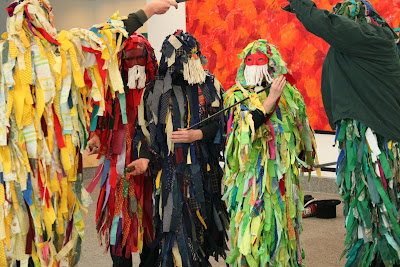 Some of the smaller children seemed quite scared of the "entertainment", and we wondered if this would be the start of another generation of adults with clown phobia. 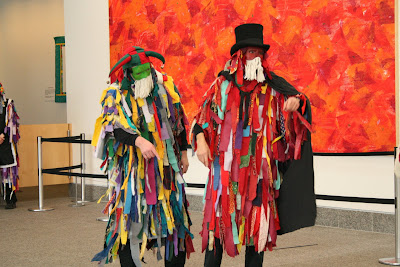 We have a good friend who has a serious fear of clowns, and we wondered what would have happened if she had been with us.

All I can say is it was another interesting "birding" trip for the Carroll/Lynch household!