In late January we decided to escape the snow on the ground and poke around some of the thickets and coves in the Falmouth, Wood's Hole and Sandwich areas. 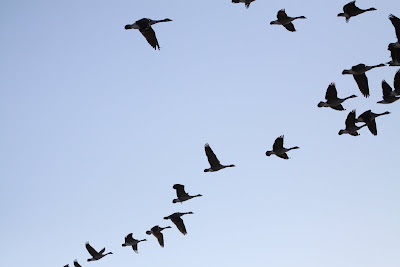 We started in the Sippewissett area at Wood's Neck Beach and then headed down to Wood's Hole with a stop at "The Knob"at the end of Quissett Harbor. 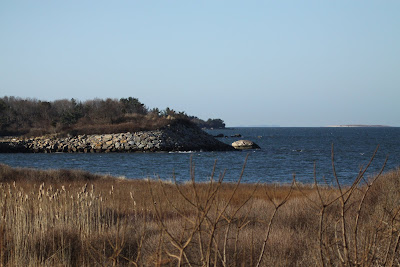 The tangles along the road in the area of the cape are fantastic for holding onto landbirds. We had Cardinals doing their spring song.... 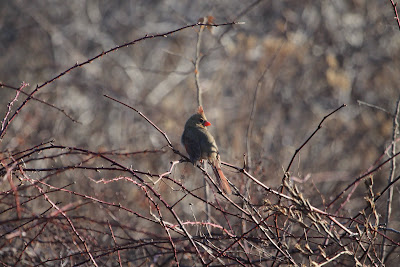 ...along with Song Sparrows... 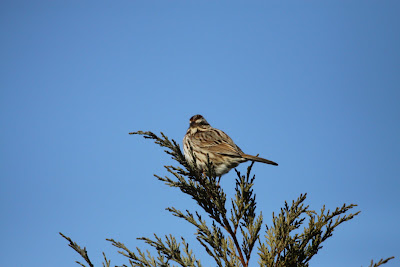 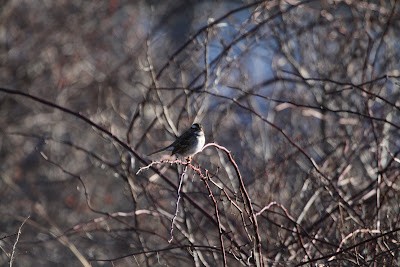 In Quissett Harbor we had small flocks of Bufflehead -- which seemed to be everywhere in this area. 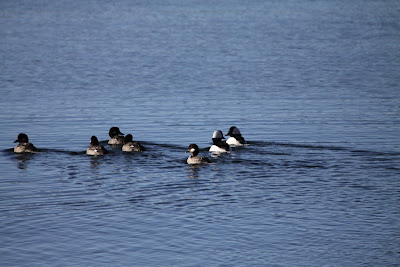 The harbor must have been good for fishing, as we had this gorgeous male Red-breasted Merganser right along the wall next to the road. It pays to be the first people out in the morning, since everything seemed to be up close and personal. 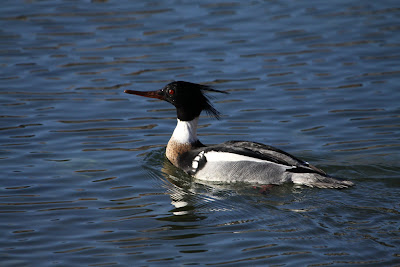 So many people see Wood's Hole as the jumping off point to Martha's Vineyard, and in summer this probably isn't one of my usual stops simply because of the traffic. But in the winter you get to see all it's charm. Known for being the home of the Wood's Hole Oceanographic Institute (WHOI) you can see the history of the area in the buildings and architecture. 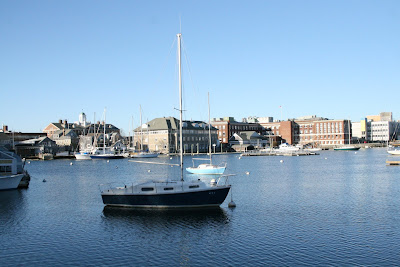 There's a great little park near the aquarium where you can scope Great Harbor and look out toward the private land along Penzance Point Road. 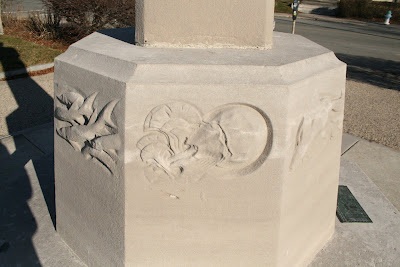 One of the things I really like about this area is that it takes it's connection to the sea seriously. Instead of really hokey nautical decorations, you find statues depicting various sea creatures and plaques in the sidewalk with squid, horseshoe crabs, lobsters and other marine wildlife. 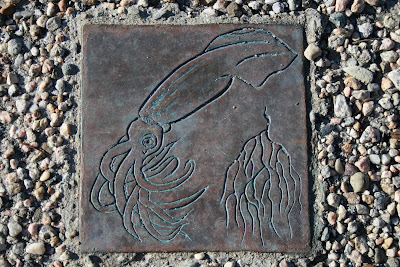 The harbor also gave us our first looks at flocks of eiders and scaup for the day. 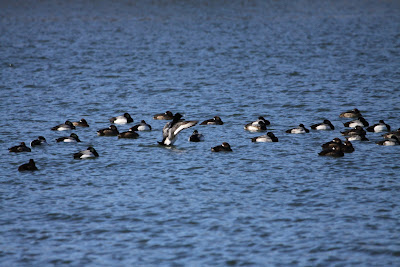 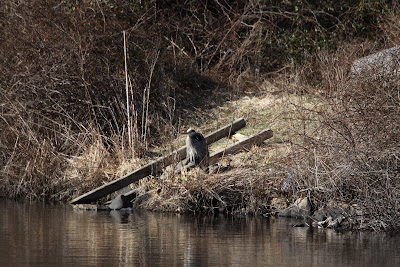 Behind the Town Hall in Falmouth we had more scaup, a Pied-billed Grebe and a nice Great Blue Heron flew in and sat sunning himself on the edge of the pond. We also had a few Ring-necked Ducks in the area as well. 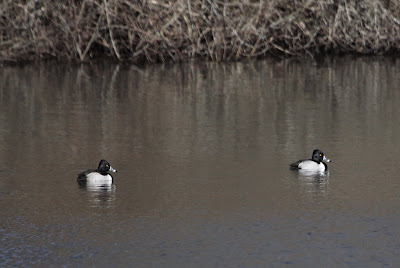 This over-wintering Hermit Thrush was enjoying the sun and allowed me to get quite close for a few shots. 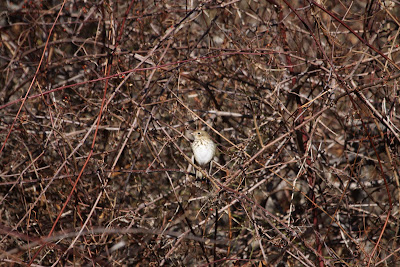 I think this Sharp-shinned Hawk was doing the same thicket birding that we were -- the only difference was he actually went into the thickets and I don't think he had any intention of taking photos! 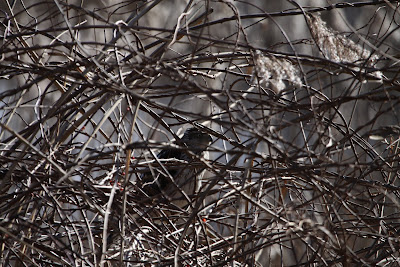 We stopped at the little Mill Pond in Marston's Mills as we headed up Rt. 149 towards Sandy Neck, and there were small numbers of Gadwall (like this female) along with Hooded Mergs and another Pied-billed Grebe. 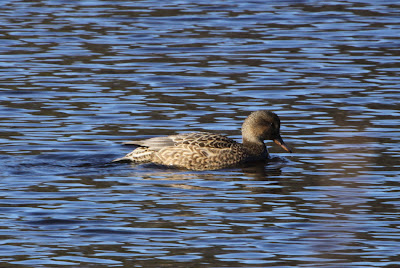 It was very windy at Sandy Neck and we didn't have much so we decided to head to Sandwich. We wanted to check the Fish Hatchery for over-wintering snipe so we walk along the brook and while we didn't find any snipe, we had really great (though fleeting) looks at Winter Wren. 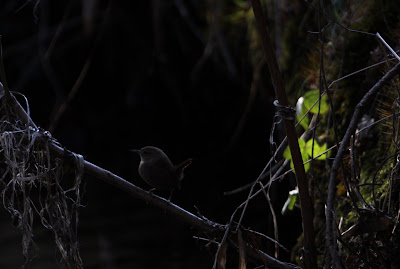 This little bird is more like a mouse than a bird -- he just seems to pop into any small hole and disappear. Mark's really good at making squeaking sounds so I was lucky enough to get a few shots off during one of the nano seconds when he popped out. 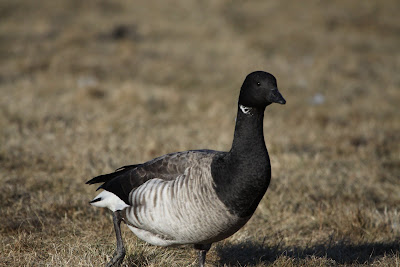 We made a stop at the head of the canal and found a nice flock of Brant grazing on the grass surrounding Joe's Fish Market. 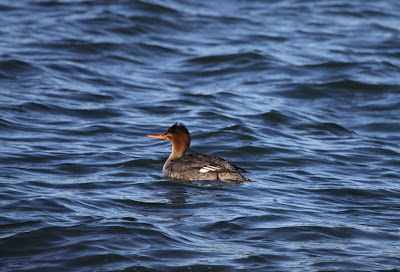 And there were a few close Red-breasted Mergs and Common Eiders, but it wasn't really hopping with the large flocks of Eiders I've seen in past years. 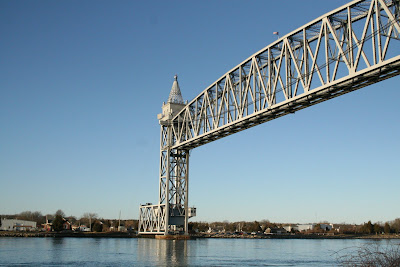 But before leaving the cape we decided to go down to Bourne and check out the area around the railroad bridge where a female King Eider had been reported. This was not an area we've been to before, so it was fun exploring (and we were a little embarrassed that we'd never been here!) 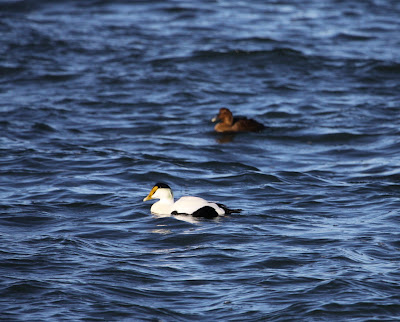 Right at the bridge we found a great parking lot and realized we had great views of the eider at this end of the canal. We were looking across to the Mass Maritime Academy and saw that you could already park and bird from that side as well. After decades birding in the state, all we could say was "Duh". I couldn't believe we had never explored this area. 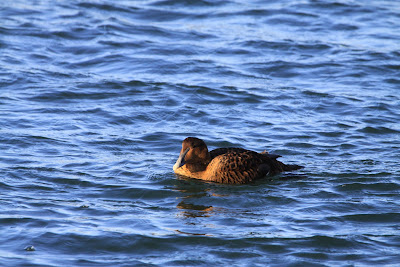 We starting checking every female eider, but most were Common Eider like the one above. Nice looks, but you really needed a scope to check the larger flocks. Mark did manage to find the female King, but by the time we lowered the scope to my height, I couldn't refind her. 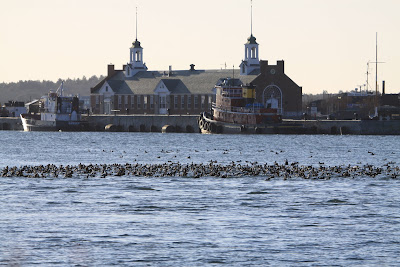 I think it had something to do with the THOUSANDS of eider that were in this area. The flocks were truly unbelievable....in fact, I'm surprised we found eider anywhere on the cape today given the numbers that were at this end of the canal.

As we headed off the cape, we realized we would need to come back again and explore the non-cape side of this area.....maybe next weekend.