Mark and I started out the new year like we always do....out getting the first birds of a brand-new clean year list. There's something fun about "erasing" the previous year's records and starting on a blank list. Even though I haven't kept a year list for decades, and I don't even know whether or not we break 300 species in a year anymore, I do like the concept -- maybe it goes with being a new year or something. 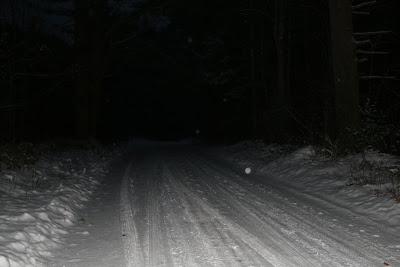 Anyway, we started this decade off much like every other one....getting up before dawn and trying to find owls. We spent time right in our neighborhood for Screech Owl, then headed up behind Worcester Airport for Great Horned and then headed to Rutland State Park which always seems to produce Barred and Saw-whet. All 4 species were at least heard! We then decided to head off to Winnimussett Meadows in New Braintree to look for the Rough-legged Hawk. 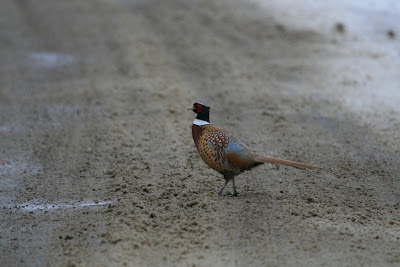 Driving the backroads around the farmland surrounding this WMA, we found two "survivors". We had two male Pheasant just casually eating grit along the road. They allowed such close approach it's a wonder these birds survived....and frankly I can't imagine the "sport" of shooting something so tame. It's almost like a barnyard chicken! 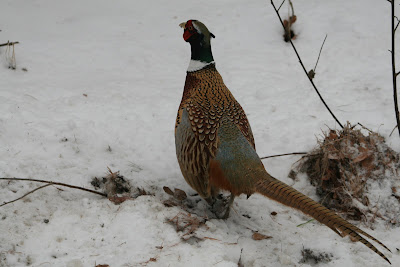 We have several Red-tailed Hawks hunting the area, so we wondered if the Rough-legged was still around. Mark spotted the bird perched high and quite a bit away. I tried to move closer to get a good shot, but this bird wanted not part of that and off he flew. Mark did manage to get a good look in his scope, but I was left with this rather boring perched-hawk-at-a-distance shot. Oh well.... 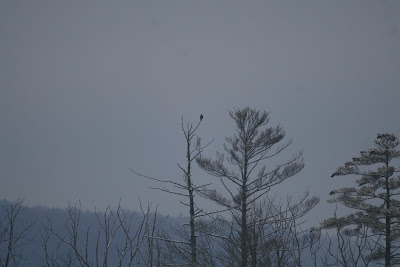 Juncos were enjoying the fresh grit all along the roads as well as we drove down through Hardwick to check the waters at South Quabbin. 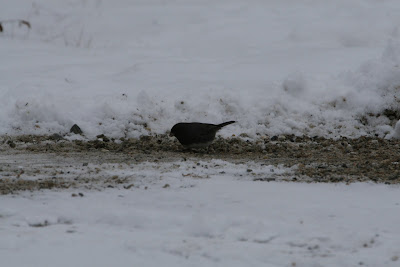 While we had Common Loons and several ducks, we did not have a Bald Eagle. Now why this is important is because on the way out Mark has been a little too self-assured about the sighting of an eagle. In fact I think I accused him of putting a jinx on us. So when we could not turn up a Bald Eagle anywhere in South Quabbin, not at the fish hatchery in Belchertown, I was sure we would go eagle-less for the day. Although that was not the case for Black-capped Chickadee or Tufted Titmouse. 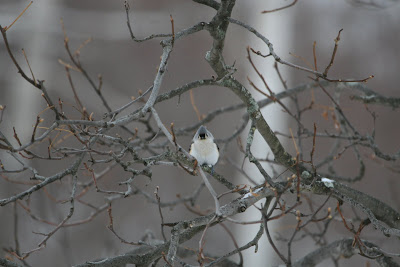 After dipping on Bald Eagle, we decided to head down to Sturbridge to get the White-winged Dove on the 2010 list. Along the way we stopped at the north end of Wickabog (frozen) and Lake Quacumquosett (also frozen) and sped by the miniature horses (who looked cold but not frozen)!

When we reached Bill's store, the dove was very obligingly sitting in a low bush tolerating the photographers who were snapping happily away. I joined for a few minutes, but the bird eventually moved to a much higher tree and then flew off to feed elsewhere. Since I knew there would be others stopping by all day, I crossed my fingers that he would be back. 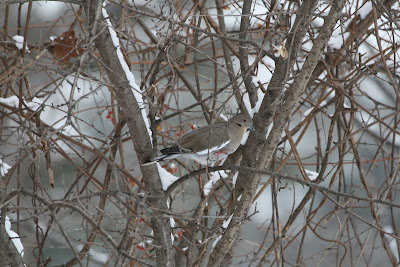 I did manage to get this shot of a Hairy Woodpecker that was visiting the feeding area next to the store, but the Red-bellied in the area kept eluding my lens. 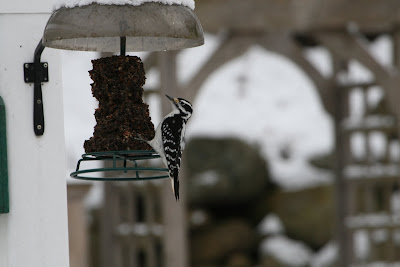 Since it was already noontime and we still had places to go, we said goodbye to Bill (who had opened his store for the benefit of birders stopping by) and headed back towards Worcester to visit some of the areas we had covered on the Worcester Christmas Count. There was a particular area in Northboro which had an open stream and we wanted to see if the Catbird we had found on the count was still in the area. 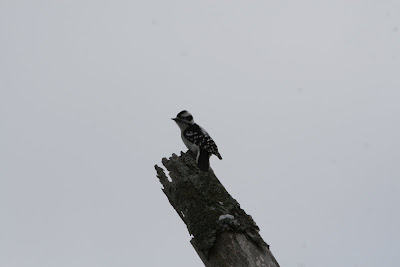 When we arrived at the area (just south of 290 off of Church Street) we found several woodpeckers in the area. At one point when we played the screech owl tape, we had 3 Downies in this one dead tree, right next to the road. We heard the Carolina Wren, but the Catbird either wasn't in the area, or wasn't going to show itself to us again! 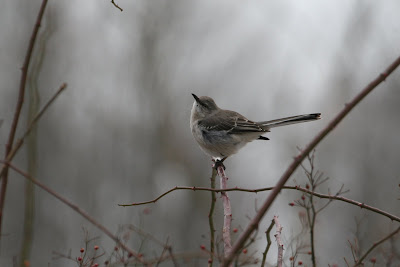 It's possible that this Mockingbird (which we didn't have on the count) moved into the area and chased the Catbird out. So we decided to head towards Wachusett Reservoir to see if the water was open and what ducks we could find. Mark also reminded me that this would give us another chance for Bald Eagle! 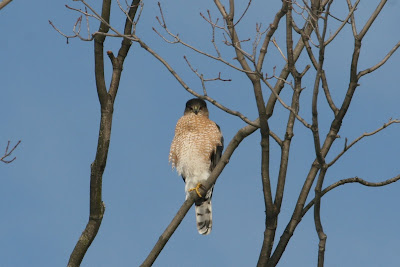 Right past the intersection of Rts. 12 and 140 Mark spotted a hawk perched in a tree in the cemetery that's set back from the town common. We turned around and went into the cemetery to find this adult Coopers Hawk just sitting and enjoying the afternoon sun. In fact we ran into Kevin Bourinot and stopped to chat for about 15 minutes -- all the while the Coop didn't even seem phased, including when a women with her two German Shepards walked under the tree where she was perched. I guess this species has really adapted well to the proximity of humans.

We wanted to do the reservoir and still get downtown for the Peregrine, so we said goodbye to Kevin and headed up the 110 side of the res. We walked out on the dike to scope the open water and found more than 500 Canada Geese, several Hooded Mergansers, a large flock of Common Goldeneye, plus all three expected gull species. We decided to go over to the Rt. 70 side near the dam and scope back along Cemetery Island for the Bald Eagle (Kevin had one perched earlier in the day there.) 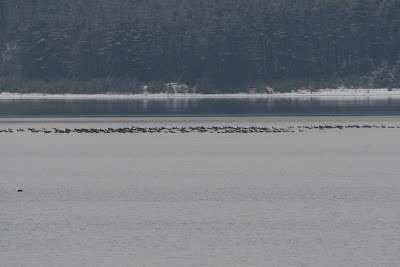 After a quick check we headed back to the causeway by the Stone Church to check for unusual gulls coming in to the afternoon roost. We ran into Kevin again and the 3 of us got a very accommodating Ruffed Grouse just walking in and out of the pines. Unfortunately, I had left my camera in the car so I could carry the scope.....and it was starting to get late and we didn't want to miss the Peregrine. As we headed downtown to look for the bird, Mark spotted one of the pair perched on the side of Union Station. As we turned around to pull into the lot, the bird took off....all the pigeons flew and that's the last we saw of it. A quick run up to the Airport (with no luck for Horned Lark) after which we headed home around 4:30 having spent around 11 hours in the field.

We ended the day (and started the year) with a list of 62 species -- including an 11th hour save when I spotted an adult Bald Eagle perched in the pines when we were scoping for gulls -- not bad for a day's work!