Last Sunday (1/17) we decided to make a trip to Salisbury to search for the Sage Thrasher. As some of you who read my blog already know, I'm not a huge fan of birding the north shore. Maybe it's the throngs of birders one has to contend with, or the feeling like you're on a conveyor belt -- birders have come and ticked off birds before you, and there will be another batch of birders right after you leave. Whatever the reason, I don't often go willingly (or at least without at least one snide comment). 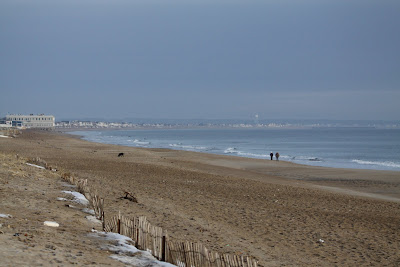 But Sunday was a picture-perfect day. The beaches weren't crowded, and the numbers of birders actually meant that many more pairs of eyes trying to spot the Sage Thrasher. 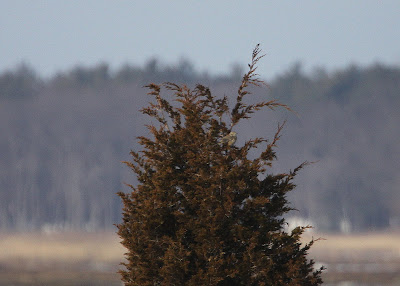 As we prowled around the parking lots, a group of birders went back along the road and spotted the bird perched in a small cedar tree about 1/10 of a mile south of the main entrance road into the campground. 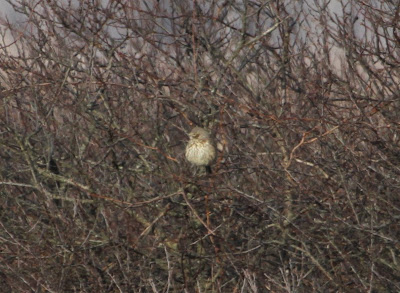 The bird fed for a while and then headed into a nearby thicket.... 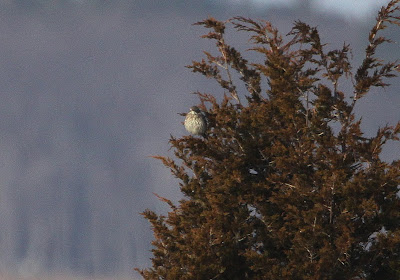 and then popped back to the cedar tree, where he stayed perched for all to see. Everyone present had great looks at the bird over the course of about 30 minutes -- clearly a very cooperative bird and not at all like the little skulkers they can be. 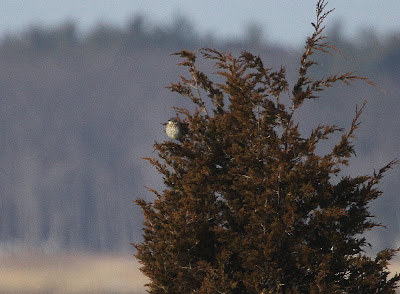 A spin around the campground didn't bring any surprises in terms of crossbills or Snowy Owls, and the boat ramp seemed unusually quiet -- maybe due to the dredging that appeared to be going on during the workweek. 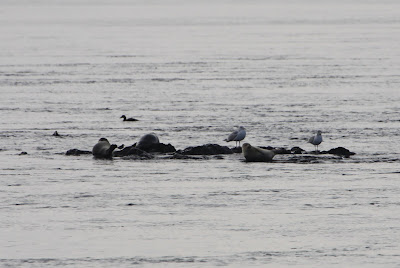 We did get the usual gang of seals out on the disappearing rocks as the tide came in. And if you enlarge the photo you can see a Dunlin hanging out with the leftmost seal.

Having been in Salisbury for about 90 minutes, we were surprised not to see any raptors. And as we were leaving a Red-tailed Hawk perched right in front of us just to prove the area wasn't devoid of hawks. 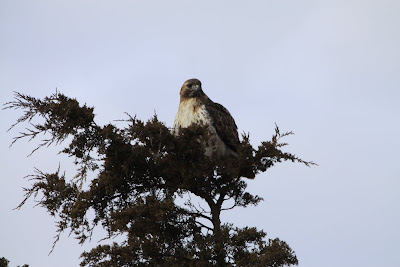 We decided to skip Parker River, but do Plum along the river to the bridge. Behind the museum we found a few small flocks of Long-tailed Ducks; although the big numbers clearly haven't begun to build up yet. 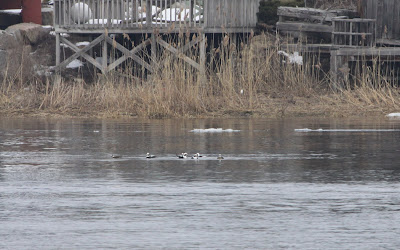 Further down the island (right across from Plumbush) Mark spotted a Kestral sitting on a feeder in someone's backyard. As we turned around to see if we could get photos, the bird jumped down on the ground and started to dig in the grasses....obviously having seen or heard something of interest (in the it's almost lunchtime sense.) 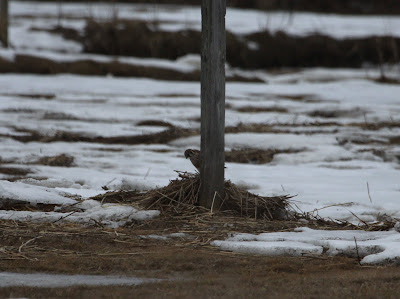 We watched the bird for about 10 minutes as it continued to (unsuccessfully) pursue it's prey.... 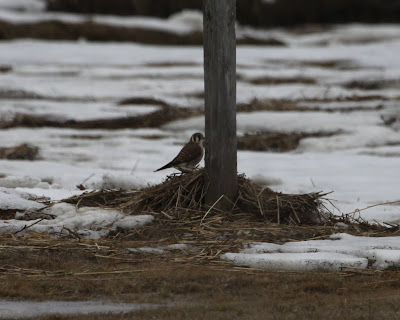 before flying off to the nearby phone lines. 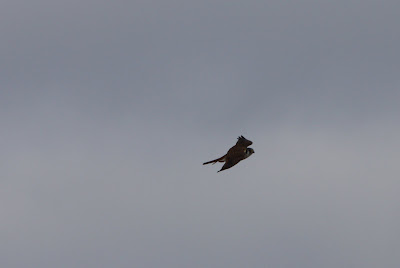 The bird truly seemed perplexed as she tried to figure out whether or not to try again. We don't know what she decided, since we left as other birders came along and stopped to see what we were looking at. 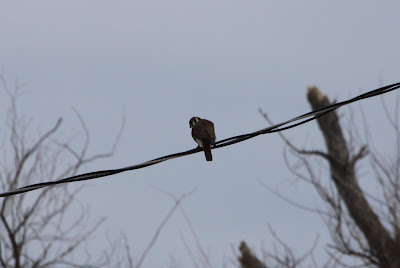 As we travelled up-river to the Towle factory, we were hoping for eagles, or Barrow's or even unusual gulls -- but things were definitely on the quiet side. We had some small flocks of Common Goldeneye, but nothing we could even try to make into a Barrow's. 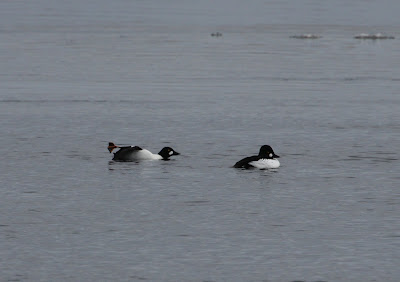 So having spent a good morning, we decided to head back down 495. Along the way I did pull off the shoulder to take a photo of the big red dog with the bone cutoff that stands in a field near Haverhill.

Not knowing what this was supposed to represent, I went home and did some research. The piece is part of Dale Rogers "American Dog" series. And while it was a great "lawn trinket" photo, the artist does more than that. Besides his Big Dogs (which was a travelling show this past summer on the north shore, he's done pieces I find really nice that aren't dog related. Here's a link to his studio website so you can check it out for yourself. And be sure to visit the Sculpture Gallaries on the website. 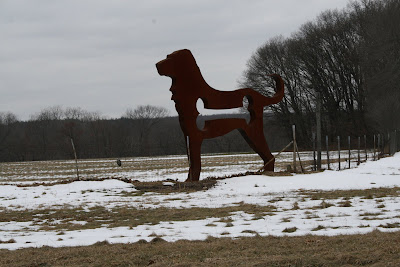 That's what I love about going around the state birding -- there's always something to see!