One of the things I dislike about writing a blog when I'm tired is that I often make mistakes...like inadvertently deleting this blog that I uploaded yesterday and just needed to put some finishing touches on! Oh well, here's Take Two. 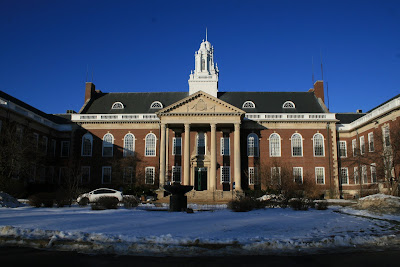 Saturday morning we woke up with a host of birding possibilities. Do we go to the North Shore and look for the King Eider? Or to Salisbury to search for the Sage Thrasher? Or to the southern Berkshires where we can enjoy the solitude but probably find little in terms of birds? After getting the requisite coffee and Coke (and Dunkin Donuts) we decided to head into Newton.....to see if we could find the Eurasian Green-winged Teal (sometimes called Common Teal) behind the Newton City Hall. 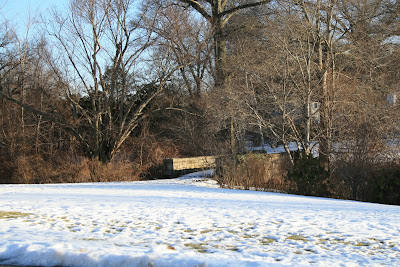 We searched the open water flowing through the meandering pond, criss-crossing the bridges and peering under overhanging branches, but all we were able to turn up were about 18-20 Mallards.

After checking the outflow of the pond, we decided to cross Commonwealth Avenue at the intersection with Walnut and check a larger pond -- Bulloughs Pond -- which appeared mostly frozen. We parked along Walnut St. and Mark spotted a number of Mallards near the entrance to the culvert which crosses under Comm Ave. and sure enough there were also two teal -- a female and a male. 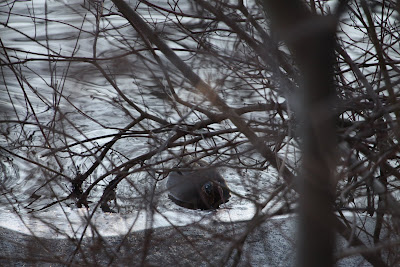 After much patience we confirmed that the male was indeed the male Eurasian after seeing the white horizontal stripe -- notable even through the heavy brush.

After 15-20 minutes the birds flew up, joined some Mallards and put down in the City Hall pond across the street. We hopped into the car, drove back and were able to spend the next 30 minutes getting great looks from the northern bridge (closest to Comm Ave). 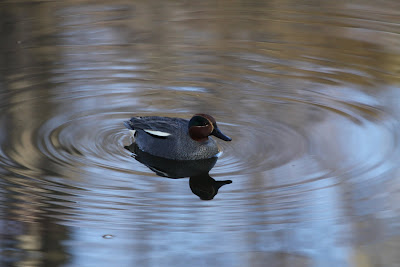 The three major characteristics of the Eurasian GW Teal were notable: 1) The broad white horizontal scapular stripe; 2) The lack of the white vertical bar found on our Green-winged Teal; and 3) the creamy, much bolder, outline of the green patch on the head (above and below the eye.)

The female, on the other hand, I'm not sure about. 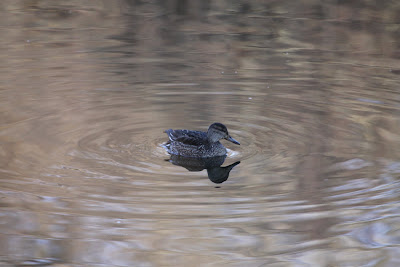 After getting home and checking a number of different resources, it seems that female GW Teals can prove quite difficult to ID. One resource did talk about the darker top to the head and darker facial pattern of the female American Green-winged Teal -- which would seem to indicate that this female is an American GW Teal. However, other resources stated that the only sure way to ID females is in the hand. 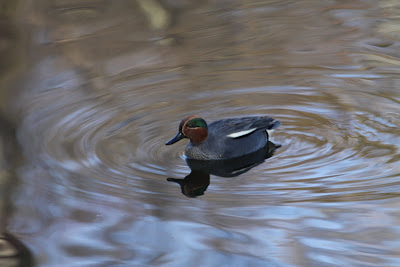 No such problem with the male though! 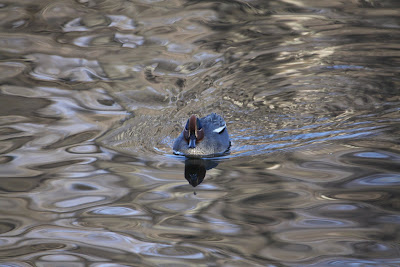 This shot of the the bird head on gives you a great view of the bolder, pale outline around the green head patch.

Even some of the minor characteristics were noted; like the pale bar in front of the black line on the flank. The breadth of the white scapular stripe compared to the black tells you it's not a hybrid. 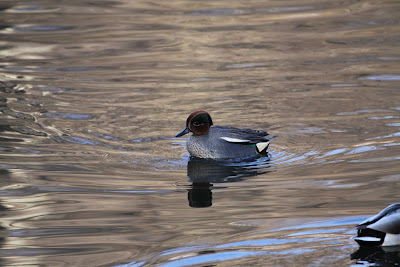 This was a very accommodating bird and it was great to be able to study it and get good photos. When I got home and went to compare these photos with American Green-winged Teal, I found that I didn't have any digital shots of Green-winged Teal!

A totally enjoyable morning in Newton!
Enjoy.....Sheila
Posted by Sheila Carroll at 2:15 PM