Probably one of the only nice things about the cold of January is that sometimes you decided to do totally non-bird things -- like visit the Aldrich Contemporary Art Museum in Ridgefield, CT. The museum is about 2+ hours from Worcester, down 84 to Danbury, then south on Rt. 7 to Rt. 35 to Main Street in Ridgefield. We went there for the first time about a year ago, and since Mark plans to interview another artist we decided we should go see his sculpture on exhibition rather than just checking out the website. 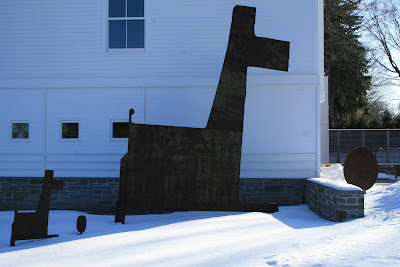 One of Mark's favorite pieces was the series of 5 sculptures -- Porta the Dog -- in all different sizes. Edward Tufte, who goes by ET, is fascinating. At first I wasn't sure about him, since Mark was raving about the books he's published on graphical and analytical displays of data. Since he is a member of the Society for Technical Communication and the American Statistical Association, I didn't know what to expect of his art. I wasn't prepared for the fun and beauty of it! 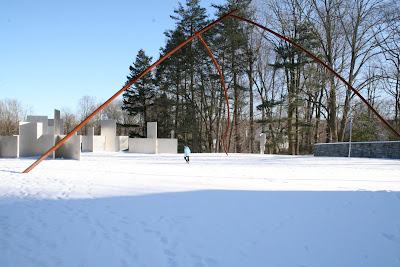 While he had several smaller pieces inside the museum, the sculptures out on the grounds were totally engaging. The way they interacted with the light and surroundings was fantastic. In the piece above, Larkin's Twig, you get a sense of scale as a snapped my photo while an 8-year old was running underneath the 32-foot high "twig" on his way to Escaping Flatland. 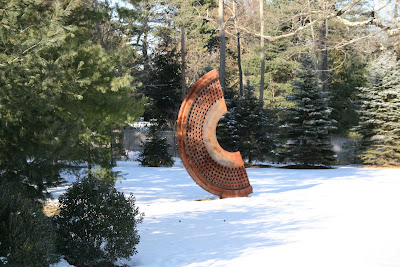 Just walking around the art totally changes it since your viewpoint is different....and the sunlight on such a bright, cold, clear day like today only added to experience. It's funny that when we were inside the museum looking out the top windows we saw something totally different than when we were outside up-close and personal with each of the pieces. 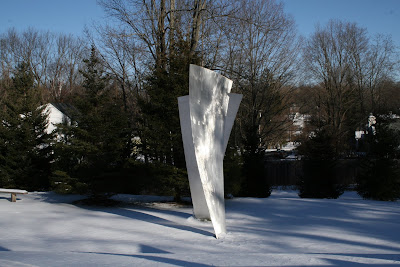 Rocket Science #2 (below) was definitely one of the ones that made you laugh. it was about 70 feet long, 35 feet high, and it must be a total trip for the neighbors to look outside every morning and see this virtually in their backyard. I'd love something like this in my neighborhood if only to see the shock on most of my very proper neighbors' faces. 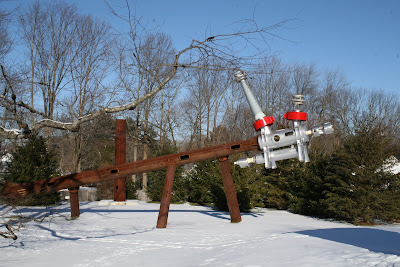 One of my favorite pieces was this stainless steel part of the Bouquet series. The shadows and light on this sculpture was totally beautiful. My photograph doesn't really do it justice. 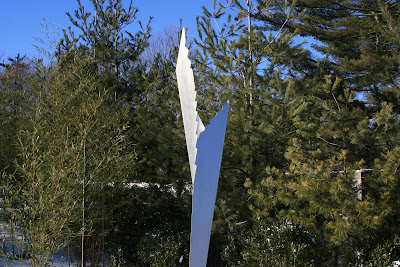 There were so many more pieces inside, but unfortunately the museum doesn't allow photography of the art inside -- only outside. All in all, it was a really fun exhibit, and it was one of two that were enjoyable. There was a whole exhibition having to do with bicycles, but without the accompanying photographs I can't begin to describe it to you.

As we were leaving Ridgefield and heading back up to Rts. 7 and 84 and ultimately back to Worcester, we spotted a large number of vultures coming down for an afternoon roost. We pulled around since Mark thought he had spotted one or two Black Vultures and sure enough I was able to get a couple of quick shots as they passed over. Realize that I didn't have my "birding" lens with me, so these were taken with the little 18-55mm lens. 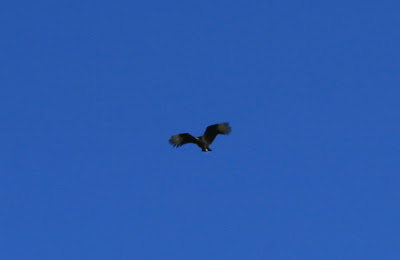 But even at a distance these birds are totally identifiable. I think we had a total of 8-9 Black Vultures and somewhere around 18-20 TV's on the trip. Realize that when you're in this section of CT, you're actually about 90 minutes directly south of Ashley Falls in western MA (southern Berks). So this makes one wonder if Black Vultures are throughout the whole western edge of CT along the NY border. One day we'll have to head home from the Sheffield MA area via Rt. 7 south and then loop back up 84 to Sturbridge. 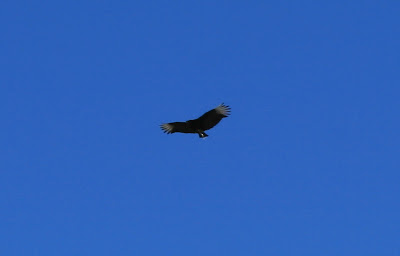 Anyway, a totally enjoyable day afield -- and with only a smattering of birds.