An Unusual Beginning to March -- Parties and Birds

On Saturday, March 6th, we ventured out to Quabbin in the wee morning hours....wanting to take advantage of the beautiful weather predicted and try to get some birding in before Mark got all tied up with his commitments at the Worcester Art Museum's big opening party Saturday night. 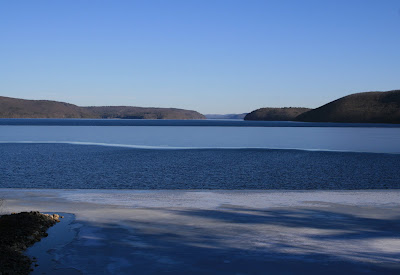 When we arrived at the Administration Building it was a gorgeous morning, and even though there was still ice on parts of the reservoir, it was clearly moving in the right direction. A young Bald Eagle was at the edge of the ice -- not sure whether he was fishing or just bathing. 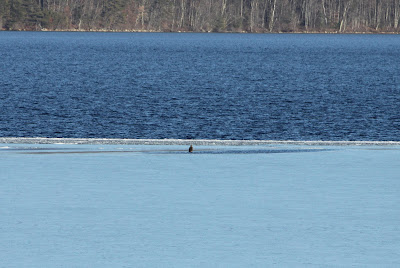 With most of the snow gone, we had our first good looks at spring turkeys at Quabbin. We were beginning to think that the fall hunting season had totally depleted the flocks....they are certainly far less obvious this year than in the past 4-5 years. 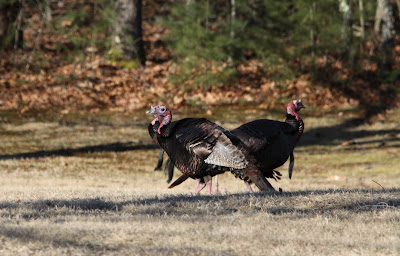 When we got to the Enfield Lookout it was so clear that you could clearly see the snow-capped top of Mt. Monadanock in the distance. 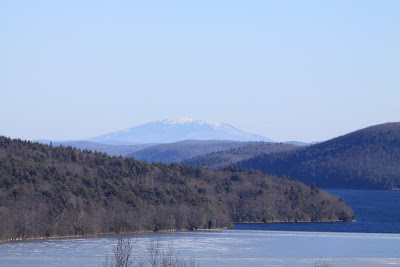 The early skunk cabbage was poking up in some of the wetter areas.... 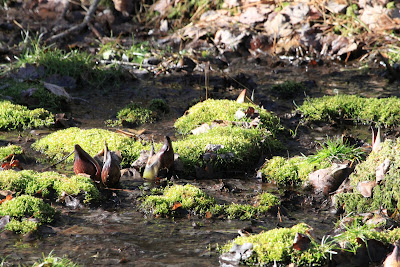 and on the way back to Worcester, we found some Common Mergansers in some of the ponds in The Brookfields that were starting to free up from ice. 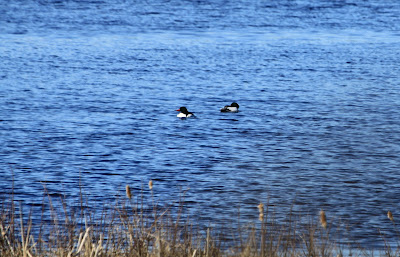 We did, however, run into some sort of ice sailing extravaganza on Lake Quabog. It's likely that this is the last weekend this sort of winter activity will take place, since parts of the lake were definitely ice free. 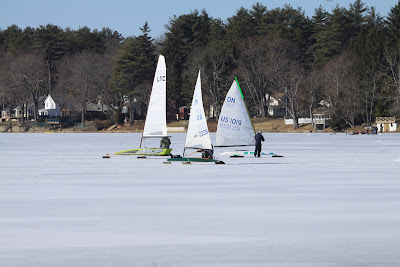 And when we pulled into the driveway we were greeted by the first big flock of Common Grackles coming to our feeders. Definitely a great early spring morning.... 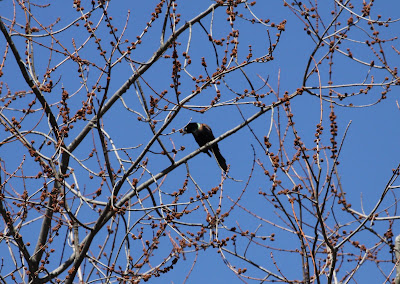 By early afternoon we were into the art museum phase of the weekend. Saturday night was the opening of the photography show: Who Shot Rock. Not only was there a big party to attend, but Mark was going to be one of the events....in addition to live band, a book signing by the curator of the show, Mark was DJing in for the whole.

It was great to see the Development Director (Brian Barlow) from the museum decked out for the event and hanging with some of the more important "guests". 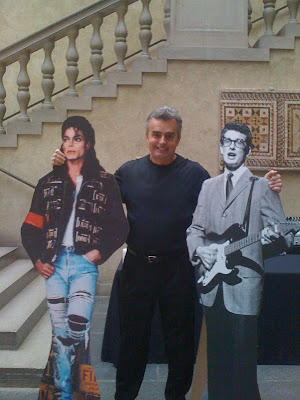 Then, of course, there was the Director of Education (Honee Hess) looking totally awesome in her leather jacket and leather pants. It was clear that everyone was looking for a great party! 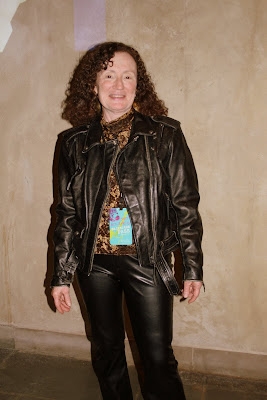 One of the special highlights for us, was a mini-reunion of the some of the former rock staff of WICN from back in the days when Mark was the rock director and the station had an alternative rock show on from midnight til 6 a.m. Mark totally enjoyed seeing Dick Greene and Bob Olson at the event. 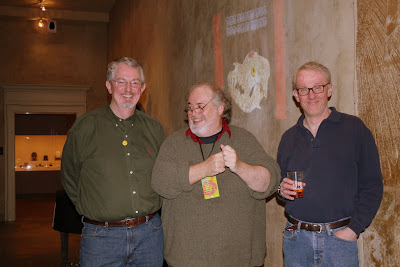 And then we had Val Miller come in from Amherst with Scott Surner and hung out with some auburn-haired woman for purposes of having their picture taken. 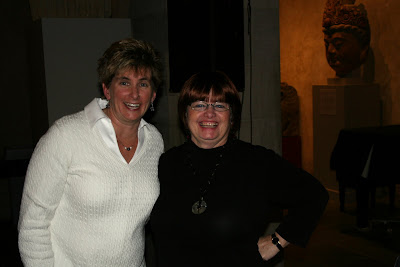 More former WICN rockers ~ Judy and Joanne Robichaud came in from Boston with their significant others to hang with Mark. In the background you can see the slide show Mark put together of album covers spanning 5 decades. This proved to be lots of fun as people stopped by and talked about what they were doing when they saw this band or bought that album, etc. 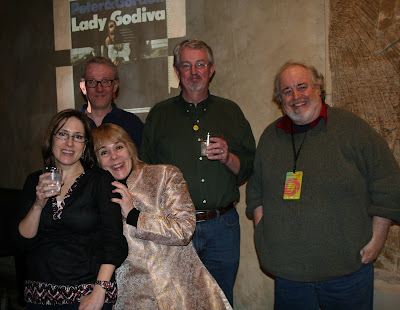 Needless to say everyone reminisced about the says of sex, drugs and rock and roll!

Winning the prize for coming an absurd distance to attend the event (and stay with Mark and me) was our friend Rena from NYC. She took several buses to get here, but had a great time and we spent Sunday morning rehashing the night over breakfast at the Kenmore Diner before taking Rena into Boston for her return trip.
Clearly not used to partying until the wee hours of the morning anymore, we spent most of Sunday morning lazing around after getting back from Boston. However, we did venture out in the afternoon to see what was happening with the local ponds. 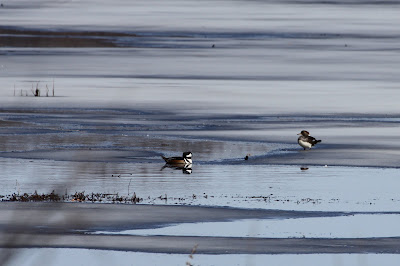 At Suasco in Westboro we had a pair of Wood Duck and this pair of Hooded Mergansers, along with a Mute Swan....all seemed interested in setting up their breeding territories. 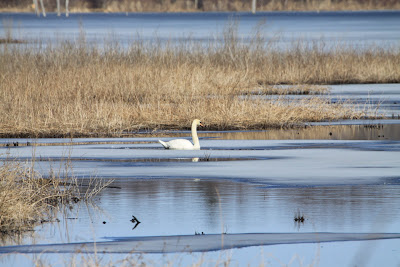 Unfortunately, the swan appeared to be alone, and we could only wonder whether it's mate was the dead bird far out on the ice. We wondered whether it died of natural causes or if an eagle maybe helped it along..... 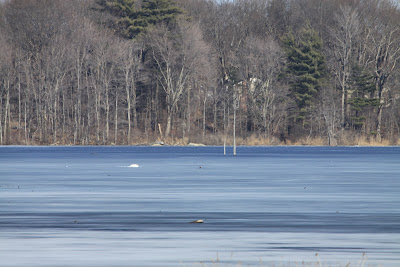 Just before sunset we headed up to the Worcester Airport to check on the Snow Bunting and to listen for woodcock. 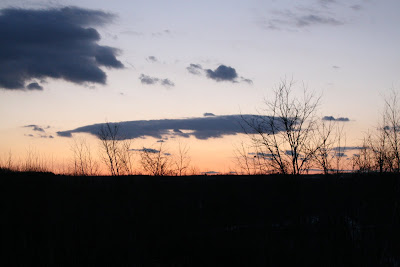 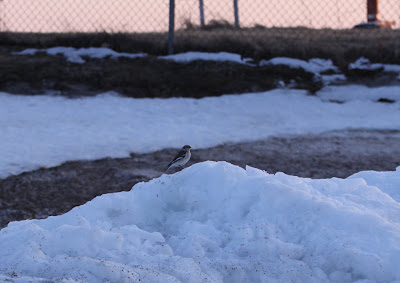 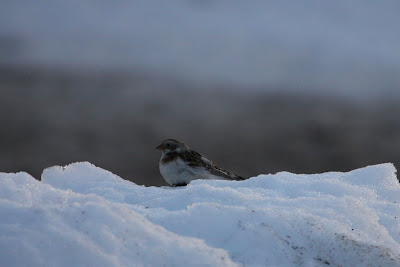 We dipped on woodcock; however, we did have calling Great Horned and Saw-whet Owls at various stops. 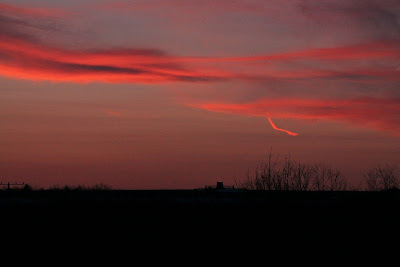 A return trip to the airport on Monday evening turned up several displaying woodcock, so the fair weather of this first March weekend must have done the trick.

All in all it wasn't your typical Mark & Sheila weekend....but a fun one nonetheless!