Since the weather was iffy this past weekend, we weren't sure that this past Sunday's class trip to "The Brookfields" was even going to come off -- and I'm so glad it did. Remember, this is a migration class, so we were hoping to get lots of early migrants like Palms (4) and Ruby-crowned Kinglets (2). And while they were certainly migrants, we were pleasantly surprised with the raptor show we had. We had 7 species, including Osprey, Bald Eagle, Northern Harrier (3), Sharp-shinned, Cooper's, Broad-winged and Red-tailed. 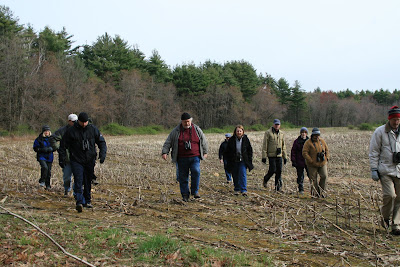 We started the morning out at Quabog where we had a pair of adult Bald Eagles. Unfortunately, since neither were sitting on a nest we're a little concerned that their nest (if they had one) might have failed due to all the bad weather in March. We also had a nice male Northern Harrier flying up the Quabog River. But since there wasn't much in the way of ducks, we made our way down to Quacumquasit (aka South Pond) -- again not much waterfowl. But we did walk a bit in the cornfields both right at the parking lot opposite the pond and in the WMA entrance along Lake Road. 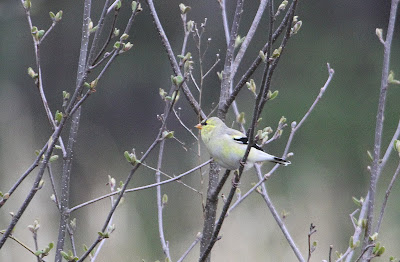 The goldfinch were singing and starting to develop their color, although they are such a late nester that I probably don't pay much attention to them until June when I'm looking for breeding behavior for the atlas. We did have a pair of Canada Geese acting very strange at the edge of one of the cornfields. Both birds were laying as flat as they could and trying not to be seen. When I approached a little closer one of the birds got up and came over next to the other one. I thought maybe they were on a nest since there was a pond nearby, but it could also be that one of the birds was hurt and the other was standing guard. After all we were in a WMA where hunting is allowed. We backed right off and both birds seemed to relax. I'm hopeful that when we're next in the area, I'll see 6 or 7 little goslings zipping around. 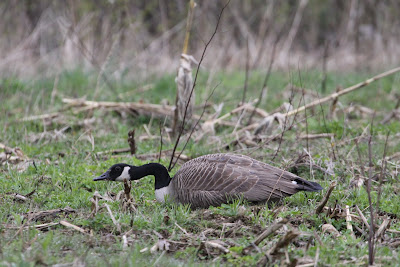 White-throats were everywhere, all singing their spring song (or at least parts of it). And their spring plumage was really sharp. 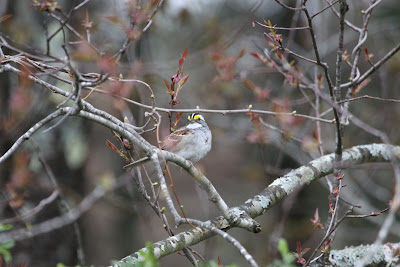 Red-tails seemed to be everywhere as well. I think we ended the day with 14-15....and none that I would say were definite migrants. When I got home and looked at photographs I thought this one was an Osprey just based on a quick look at the wing shape. We also had another Northern Harrier moving up from the south -- another male. We were excited since we don't get big numbers of harrier in this area; not that 2 is a big number! 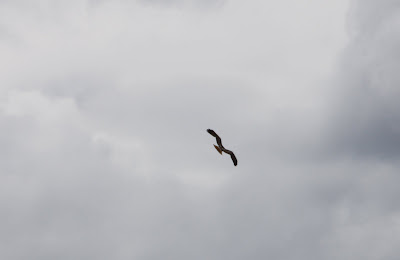 Also it seemed that Pine Warblers were back in full force. Everywhere there was a stand of pines, you could hear them calling. I was lucky enough to get this female come in to my spishing so I could get a quick shot. 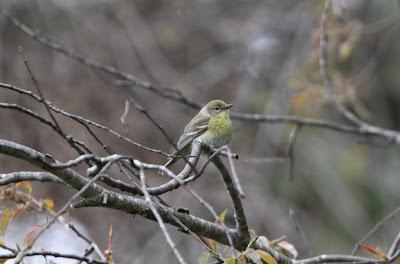 And there were Bluets blooming in many parts of the cornfield....another good early spring sign. 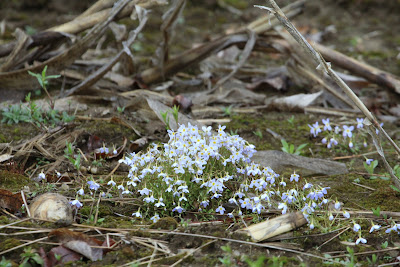 From South Pond we headed northwest to visit Wickabog with a stop along the river crossing on Rt. 148 and a check for early Virginia Rails. But the water is still quite high and we didn't hear any. However, we did have our third Northern Harrier -- this time a female. 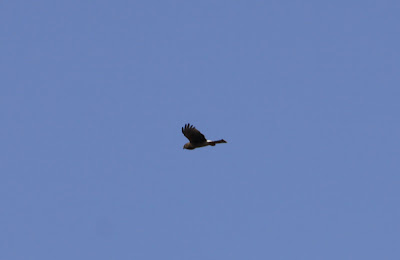 And she put on quite a nice show hunting over the marsh. We all got great looks. Right at the pull off by the bridge we also had Broad-wings and Turkey Vultures starting to go up along the far hills as thermals started to form. I was torn knowing that it would likely be a good day for hawk-watching and we weren't really close to any good hawk-watch spots. 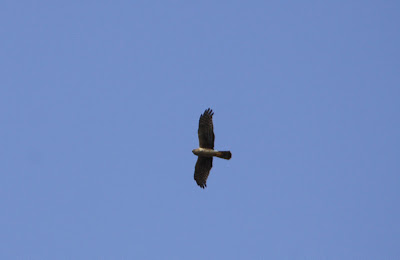 As we continued onto Wickabog we made a quick stop at the Brookfield Cemetery along Rt. 9 to check again for rails. We didn't have any, but did spot a handful of Green-winged Teal in the marsh. We followed Foster Hill Rd. to West Brookfield so we could stop at Coy's Brook before going on to Wickabog. We had a couple of Great Blue Herons, but no signs yet of American Bittern. This is an area where we've often had sightings of that bird, but not today. 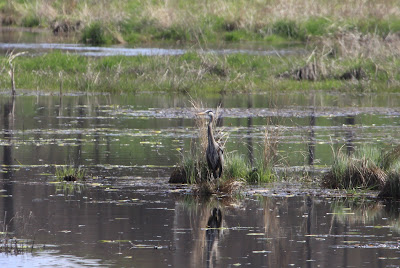 We had an accipiter come in over us and there was a lot of discussion in the class as to whether it was a Sharpie or a Coop. After studying the photos blown up at home, Mark made the call that the bird was a large female Sharp-shinned. 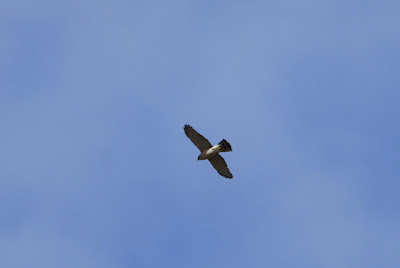 While the tail looks a little longish, the head really doesn't seem to protrude enough. When I've seen classic Cooper's Hawks in flight they often remind me of a pheasant with the tail so long. This bird overall seemed fairly compact. 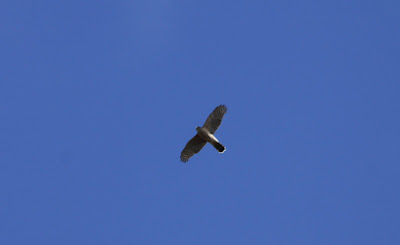 Besides getting our first phoebes nest-building under the bridge, we also had these two male Tree Swallows checking out natural cavity nest holes. 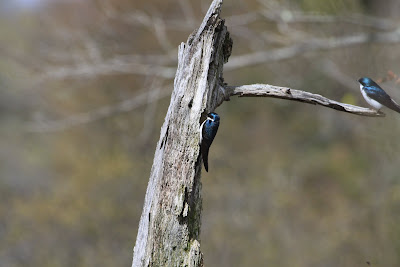 Besides poking it's head into check out the hole..... 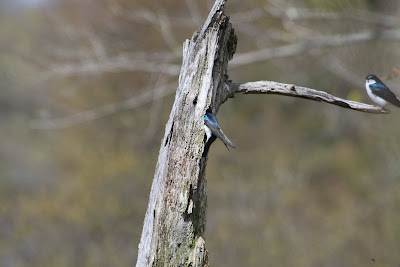 this bird almost totally disappeared several times. We watched for about 15 minutes and it will be interesting to go back in a few weeks when the females arrive and see if there's any nesting activity at this particular site. 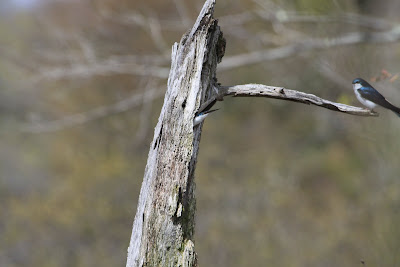 When we stopped at the beach entrance to Wickabog off Lakeview Ave., we had more phoebes. This view of the lake often produces lingering Common Mergs, but other than one Double-crested Cormorant, there wasn't much around. We did have several Painted Turtle out catching the early spring rays. 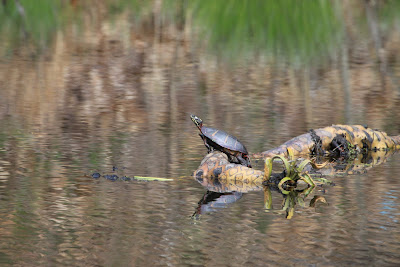 And another Great Blue Heron looking for Sunday brunch. So we headed up Wickabog Valley Rd. to the north end of the pond where there's often ducks and gulls. We were hoping for a Caspian Tern, since one had been reported the day before from Suasco in Westboro and this area seemed just as likely. 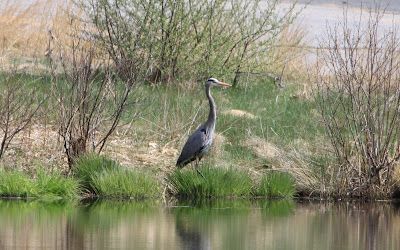 But there were a small number of Ring-billed Gulls at the north end; it really was pretty quiet. We did have two Osprey fishing in the lake. We wondered if they might be a pair and would actually set up territory in the area. 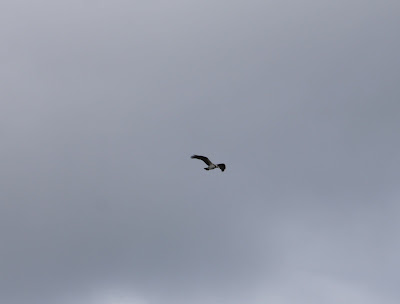 After a few minutes, though, one of the birds left and the other stayed to continue to fish. He made a couple of unsuccessful attempts to catch something..... 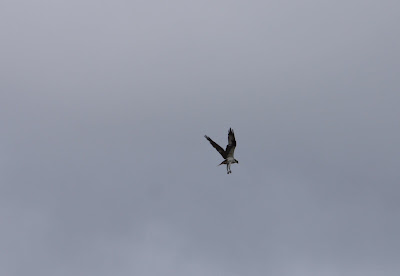 and then he settle down on the water and began to bathe. After about 15 minutes we decided it was time to move on and so Mark acquiesced to my usual request to lead the class trip for a side stop to see the miniature horses. This always proves a highlight for me, especially in spring when the new foals are romping in the pastures. But Sunday proved to be exceptionally special! 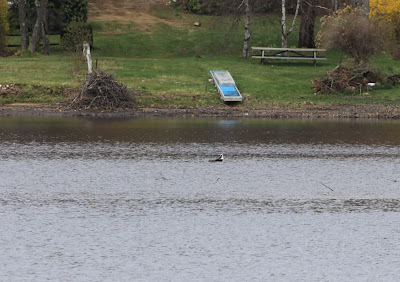 As we pulled up to the pasture where 4 or 5 new foals were with the mares, we noticed the owner and his daughter come through the fence at the far end of one of the pastures and some folks in the class thought they might ask us to leave. Actually, they were focused on something totally different. I asked the class to back off just in case, and then I noticed one of the pregnant mares down on the ground in the pasture right next to us.

Literally within 5 minutes the owners were helping the mare give birth right in front of the entire class! 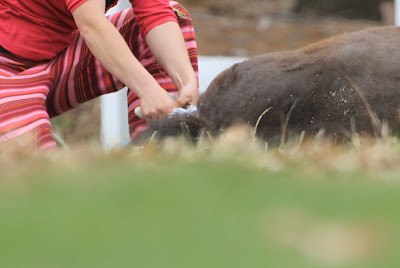 Everyone was stunned and while I did discreetly take photos from a respectable distance I was totally awestruck by what I was seeing. 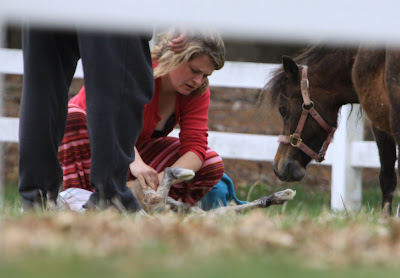 Literally the week before when we stopped by I had mentioned to Mark that I've always wanted to see a horse born, and if it could be a miniature horse I'd be ecstatic. Now here it was happening right in front of me.

Within minutes the whole thing was over. The mare was back up on her legs, checking that the baby was okay and the class started to come back to life. Kevin was concerned that Rebecca (who couldn't make the trip) would be totally jealous that he witnessed this. They're expecting their first child in June and while this wasn't really a good preview of a live human birth, Debbie Berard (who's a nurse) assured Kevin he'd get through that as well. 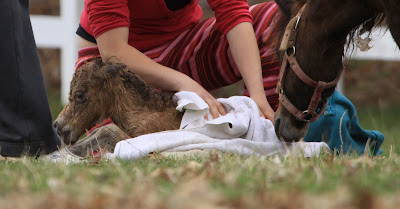 The new foal was wrapped in a blanket and carried up to the barn (with her mom following closely). I'm hoping to get out there this week to see this week-old foal running around the pasture with the other 4- and 5-week olds.

Mark's only concern (other than that the class not disturb the animal as she was giving birth) was that there's really no way to top this on a class birding trip in the future.
As for me, it was so special that I still can't quite believe I saw it happen.....and I do get a little misty-eyed even now as I write about it.
Enjoy......Sheila
Posted by Sheila Carroll at 7:50 AM