It was a cold, windy day for the Sturbridge count this year, so many of the ponds had started to freeze. Mark's and my area of the count is called "West Brookfield" since most of our area centers around that town. There are 8 sectors covering the full Christmas Count circle and ours is in the northwest quadrant. 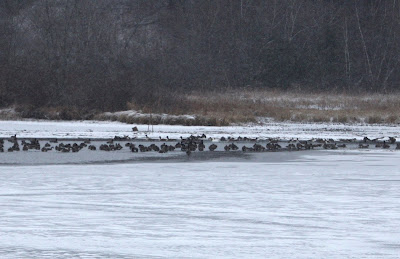 The small sliver of open water at Lake Wickabog had hundreds of Canada Geese and eagle-eye Mark spotted a Snow Goose right in the middle of the flock. A nice way to start the day! Of course since we did start before dark for owls (we had the usual 4 species to be expected) it really wasn't the start of the day....just the start of daylight birding. 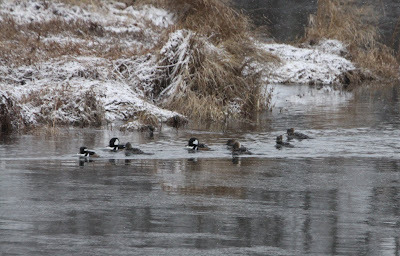 At the outflow of the Wickabog into the Quabog River near Rts. 67 and 9, we had over 30 Hooded Mergansers. There were also good numbers of Mallards, a handful of Black Ducks and an American Widgeon. The latter is not a bird often found on this Christmas Count. 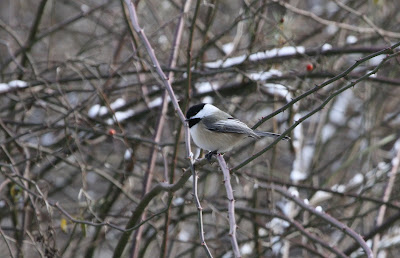 A lot of our territory runs through the back roads on the south side of Rt. 9 and some of the thickets were hopping with Chickadees early in the morning.

When we stopped to play the screech owl tape, we were able to bring in this Carolina Wren ... 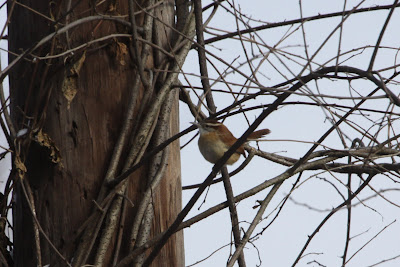 and it seemed that the numbers of Cardinals were up in our sector as well. 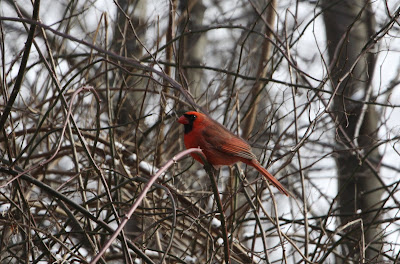 With a light dusting of snow on the bushes, it was actually looking like a Christmas card waiting to be printed. (Or maybe that image popped into mind since I'm woefully late in doing anything for Christmas this year.) 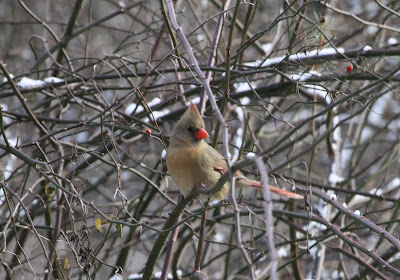 We met Val & Scott Surner at noon to compare notes, since our territories are adjacent and we often spend time in the afternoon with Val mopping up both our territories, but Scott was able to join her this year, so we kept our afternoons confined to the different territories. However, we were excited to hear that Scott got a Woodcock (with photo documentation) in Val's territory. 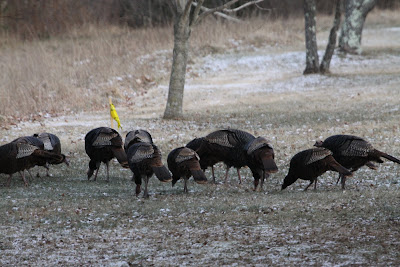 After search much of the day we finally were able to get a flock of Turkeys at the barn in West Brookfield along Wickabog Valley Road. This is usually where we get them on the count, but 3 previously drive-bys today turned up nothing...guess #4 was the charm. 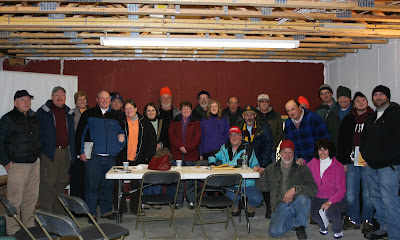 We met in Bill's & Nancy's story (Bird Store and More) in Sturbridge for the compilation at 5 and everyone got to compare notes. It turned out to be a rather average count, with 73 species recorded for the day. And we didn't have any terribly rare species or lingering warblers. Still it was a fun day, rather close to home and ending with a good group of people sharing stories and pizza!

Enjoy...Sheila
Posted by Sheila Carroll at 4:35 AM