Having taken a couple of days off for last-minute Christmas shopping (I am not one of those organized folks that have it all done by Thanksgiving) I felt I was in pretty good shape. So Mark & I decided to go to Gardner to see if we could find the Townsend's Solitaire that Tom Pirro had posted the day before. We arrived about 7:30....and it was bitter cold. And we weren't the first folks on the scene. There were a couple of birders from the Boston area (whom we didn't know) and they hadn't seen anything yet. Within the next hour a number of other birders had arrived on the scene and at 8:35 Mark spotted the bird flying into the field. 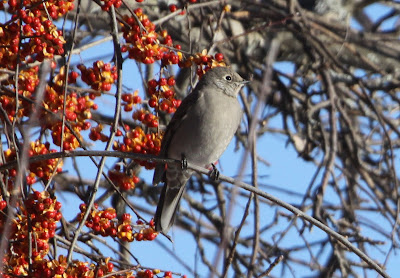 Unfortunately a number of the eastern birders had given up already, but the rest of us spent a good hour watching the bird feed on bittersweet. We even had the bird do a bit of it's song as it flew into a close apple tree. Eventually the Solitaire flew off to the southwestern part of the field and then appeared to fly directly west across the street. I know folks have checked for this bird during the Westminster Count and failed to turn it up, but at least it was a "count week" bird based on the sightings this Christmas Eve morning. 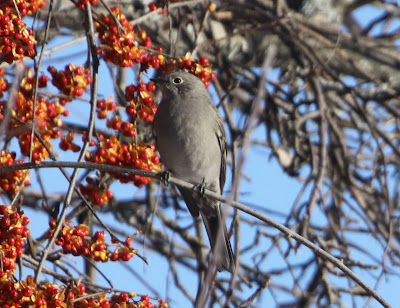 We decided to head back to Worcester and check the airport for snow buntings and horned larks and also for a very dark raptor we had the day before. It looked like a small dark Rough-legged Hawk, but neither of us were very sure so we wanted better looks.

We did not turn up the hawk, but we did have nice looks are flocks of Horned Larks feeding in the parking lot right next to the runway. 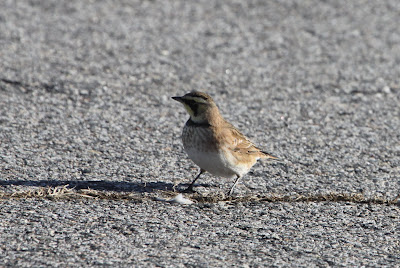 There was a flock of about 60-70 birds and they kept flying up, out to the grasses along the runway and then back to the parking lot. This was a great chance to study the different plumages and try to age the birds....plus get totally familiar with their tinkling little call in flight.

If you enlarge the photo below, you can see on the "horns" on the head pattern giving rise to the bird's name. 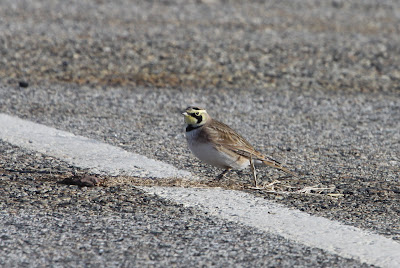 We also had a similar-sized flock of Snow Buntings in the area, but they were even more skittish than the larks. 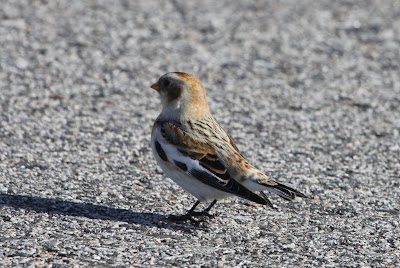 Again nice plumage study between the winter male above and the female below. 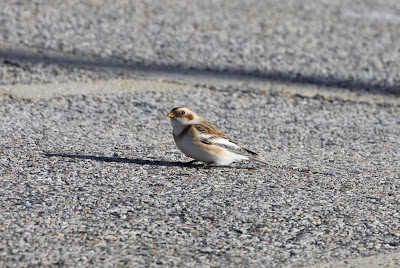 Since it was quite cold (and I did have some last-minute stuff to do) we headed home very happy with the birds we had gotten....especially the Solitaire. All in all a very nice Christmas Eve.

Later in the afternoon while I was making the lasagna and chicken parmesan for Christmas dinner at the kid's, Mark yelled out that there were crows mobbing something in the backyard. Since it was just after 3:30 we thought it might be the Cooper's Hawk that visits our feeders. Since I was in the midst of food preparation, I didn't immediately drop everything and run out with my camera.

Within 30 seconds Mark yelled again that the crows had flushed an owl into some dense pines, and this time I dropped what I was doing and grabbed my camera and ran. 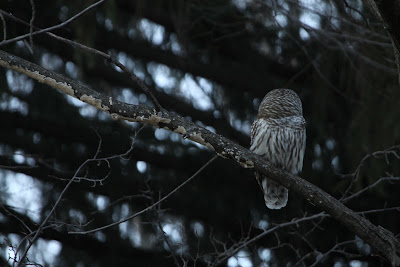 After poking into the pines I flushed a Barred Owl out onto a bare branch. The bird was obviously a juvenile and looking around for an early meal. 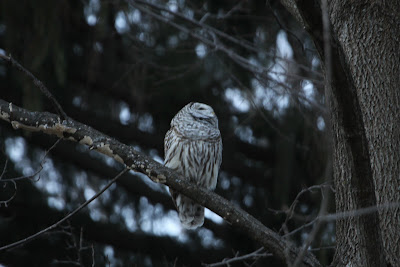 Even though the crows had flown off, he seemed more wary of what birds might come and yell at him then he did of me and my camera. We watched the bird for about 15 minutes and hoped he would stay around to feed on some of the mice that were surely visiting the food under our feeders at night. We also hoped the bird would stay close to back yards for moving around and not do too much street crossing. They last thing in the world we wanted was to wake up Christmas morning and find a dead Barred Owl in our neighborhood (which we didn't). 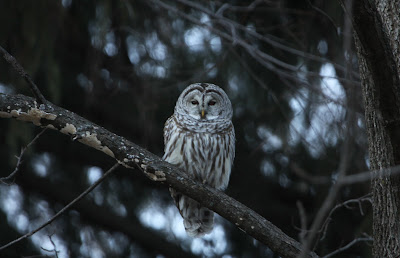 What a great way to end a very birdy Christmas Eve day.