This past Saturday we decided to take a trip to Plymouth, partly to look for some of the recent rarities (Western Kingbird and Chats) and partly to just spend an enjoyable day birding before the onslaught of the Christmas bird counts. 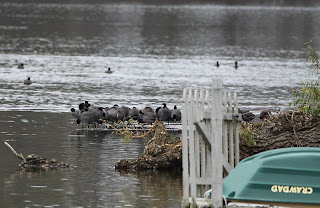 We decided to work from south to north, so our first stop was Great Herring Pond to see if the large flocks of coot were still there...we still had several hundred, including one quite close eating vegetation from the bottom on the lake. 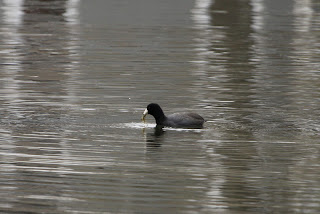 ﻿After thoroughly checking the pond we moved up 3A towards Manomet.  This is a road we've rarely taken, especially south of Manomet, so it was interesting to stop at new areas.  Right near the entrance to Ellisville Harbor State Park we found these 3 strange-looking goats.  And of course Mark made me stop and take pictures.  He would like nothing more than to live somewhere where he could have a goat! 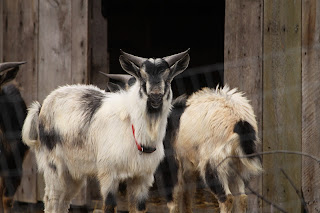 It was rather quiet at Manomet Point.  We had Great Cormorants, White-winged and Black Scoters, a couple of loons, some Common Eiders and only one seal out on the rocks.  Not even Goldeneye were around, and certainly no alcids. 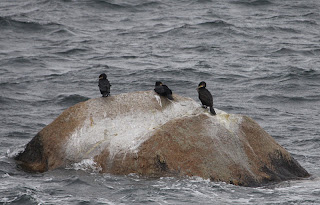 However, our major reason for stopping in Manomet was to look for landbirds.  We didn't see much at the point, so we decided to head back along the road after checking Mass Bird for the location where the kingbird had been seem.  We pulled into a little dirt pulloff near the entrance to Holmes Farm and checked the thickets near the car.  We had lots of White-throated Sparrows, Cardinals and Yellow-rumped Warblers.  And there were two Caroline Wren singing across the field.  But no sign of Chat or the kingbird. 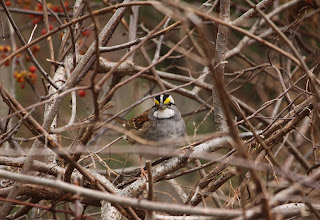 We did have a new mushroom pushing up through the leaf litter....a tribute to just how warm it's been lately.  I don't think I've ever noticed fungi in December! 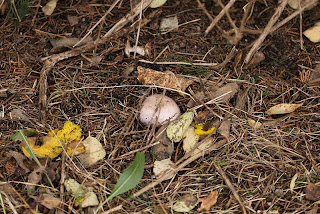 After a few minutes, we noticed 3 birders coming down the long road from the barn at the top of the rise and realized one was Erik Nielsen.  We've haven't Erik in ages, so it was quite nice to catch up....and he had seen the Western Kingbird earlier, but it had flown off after being seconds away from being breakfast for a Sharpie!  Erik told us we could drive up to the barn and park, so that's what we did and began searching every treetop and bush for the bird. 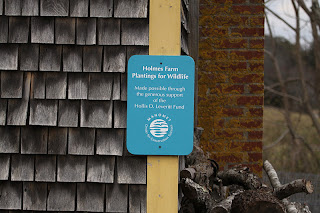 After about 15 minutes Erik spotted the bird flying back in on the far side of the hill to the east.  So for the next 20 minutes or so, Erik and I inched closer to the bird to try to get some close photographs.  I was at a far greater disadvantage than Erik, since he was using a small camera to digiscope the bird.  Other than having to lugged the scope around, this is the first time I was really intrigued with digiscope photography. 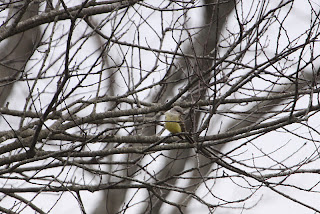 At one point the kingbird flew down and caught something to eat literally 15 feet from where I was standing, but he didn't stay long enough for me to focus...so I had to settle for a shot of him perched on one of the bluebird boxes. 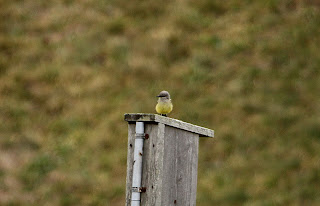 He then flew into the thickets that were down in the lowest part of the field, and we all heard him calling pretty consistently.  This was extremely interesting, because I know I've never had a Western Kingbird in Massachusetts who had done that before. 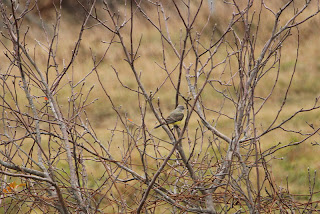 Pretty actively hunting for food, the kingbird put up again, this time on a post at the far end of that low spot and both Erik and I were able to get great shots.  Eventually I went back to where Mark was waiting by the car and after chatting a bit with George and Judy Gove, we decided it was time to head up to Plymouth.  All in all a very satisfying time spent with this Western Kingbird. 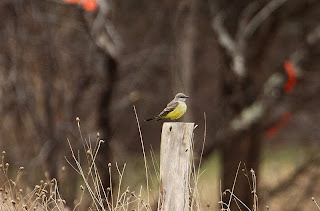 We made all our usual stops, including near Plymouth Rock and the Mayflower, but things seemed a bit quiet....at least as far as ducks were concerned. At Plymouth Beach we had a nice mixed flock of about 60 Dunlin and Sanderlings. 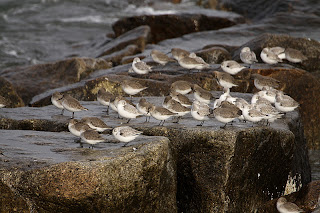 But these were the only shorebirds we had....no lingering December surprises. 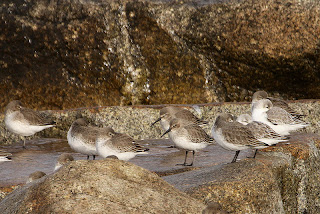 In the parking lot near the breakwater (where the Ivory Gull had been seen a few years back) we had this nice 2nd winter Iceland Gull.  He posed quite nicely for my camera, until someone pulled up in a car and began feeding the gulls.  I'm actually quite surprised at the number of people who enjoy throwing bread out for the gulls.  This was the second person we saw in about 15 minutes -- these most be some of the best-fed gulls in the area. 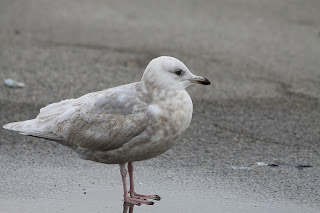 When we got to the Nelson Street Playground, we noticed what a nice job they've done upgrading the parking lot and walking paths in the area.  There were large numbers of Black Ducks in this area, but again, not much else in the way of ducks. 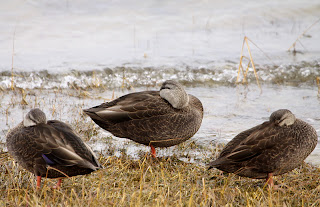 We did have a nice flock of Brant, including at least two birds wearing silver bands on both legs.  I'm trying to see if I can match the bands to anything I can find regarding recent branding of Atlantic Brant. After spending time scouring the area for any unusual ducks, and scoping out the tip of Plymouth Beach for Snowy Owl, we decided to run up 3A and check Spooner Pond where we had Redhead a few years ago. 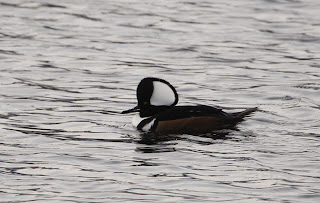 Again, with so much open water things weren't concentrated in any one spot, so we had no real rarities in the pond.  We did have this beautiful male Hooded Merganser rather close, and a handful of Coot, including one who kept chasing all the others.  Of course, there were almost 30 Mallards close by and a few Gadwall way in the back. 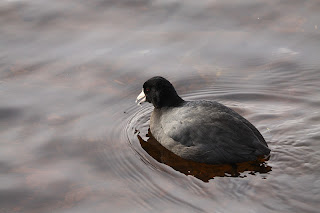 A fam﻿ily of Mute Swans came right over to be fed and I was able to get really close shots (looking down) on the adult swans.  It isn't until you get a close-up of the face pattern that you realize what strange-looking things these guys are. 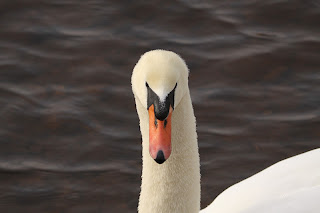 Before heading back to Worcester, we decided to make one more stop -- Jenney's Pond.  Sure enough the "resident" Lesser Black-backed Gull was still hanging around.  I think Mark said someone is trying to trace how long this bird has been seen here. 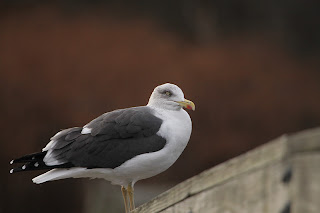 There's no doubt that if this is the same bird, he's definitely become a fixture....usually perching on the bridge railing.  I wish someone had banded this bird when it first showed up. 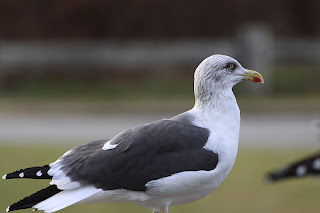 We had a few Hooded Mergs, the usual Mallards and joke ducks.  But we also had several Gadwall at the wilder end of the pond, including this female who came quite close. 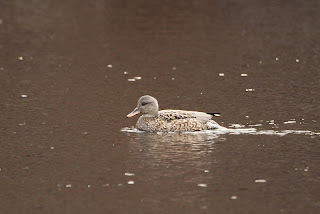 Followed by this male Gadwall in absolutely beautiful plumage. All in all it was a beautiful trip to the area, as it can be at this time of the year, so we headed back to Worcester grateful for another wonderful day birding in Massachusetts.