Now that my crazy July is behind me I'm going to do a bunch of blogs to catch up on trips we've made the last two months.  What follows is a series of photos from Wachusett Reservoir, Sterling Peat and Lancaster all within the last few weeks.  Hope you enjoy the tour!

You can't seem to stop anywhere at Wachusett these days without finding a Common Loon.  I think it's a bit too early to see migrants, but there are an awful lot of adult birds on the reservoir.  Each time we do a morning trip we usually find 5 to 7 adults and sometimes more.  BTW, the adult and young bird at Gate 17 (South Bay) continue and the young bird is growing larger every time we stop by. 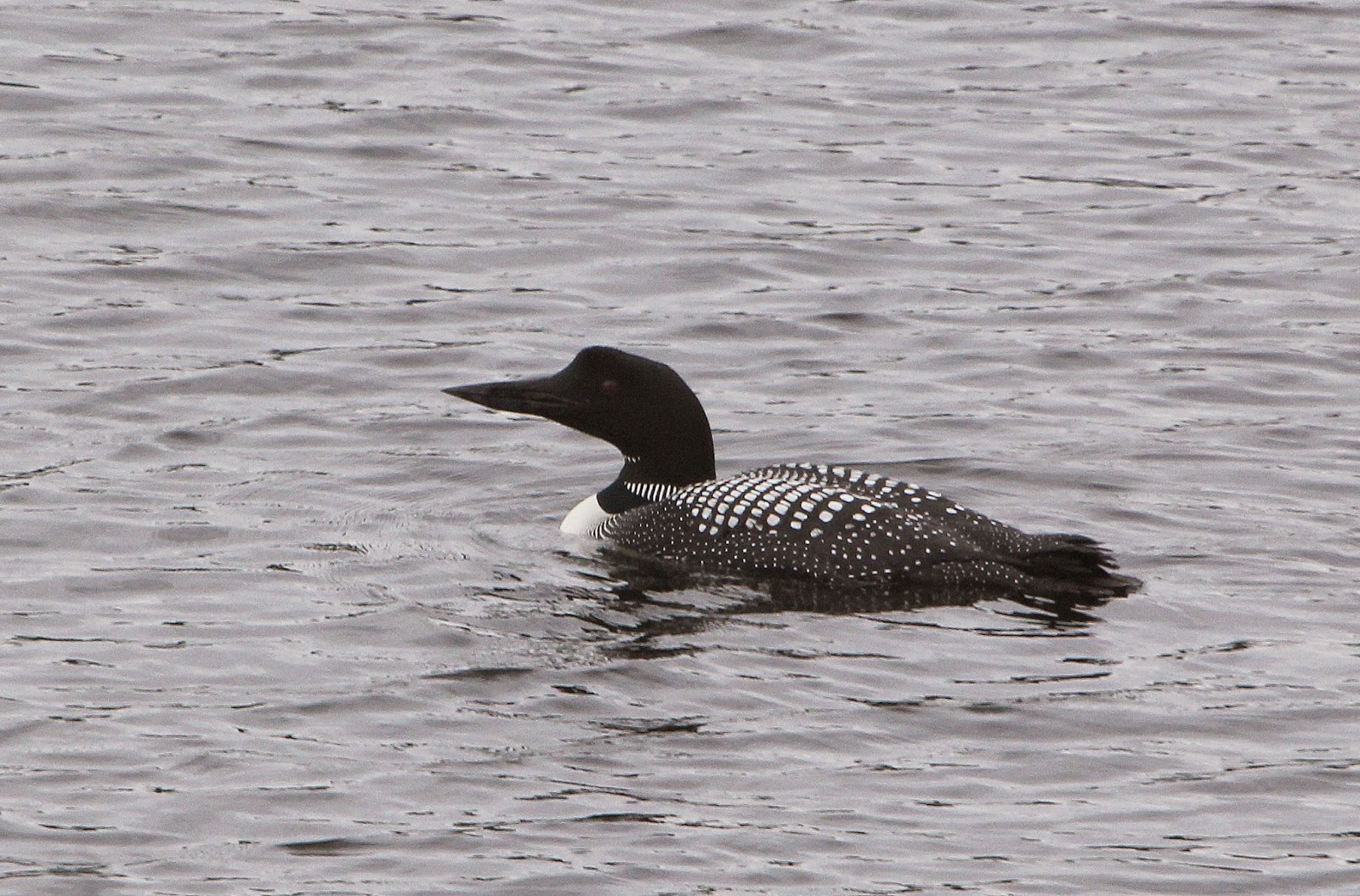 Walking out Gate 37 is a new piece we've added several times a week.... 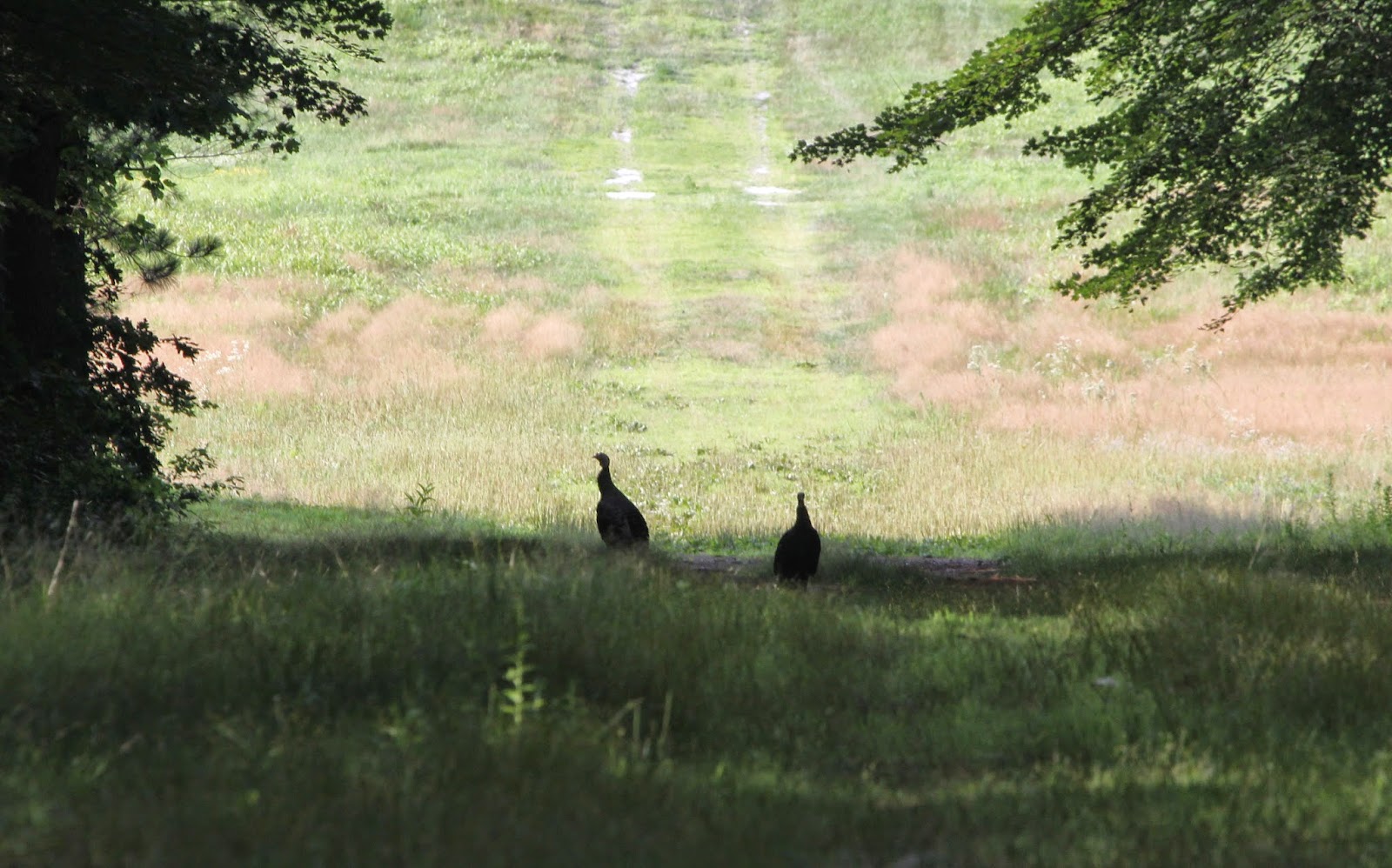 ...mostly to check on the breeding Eastern Meadowlarks. 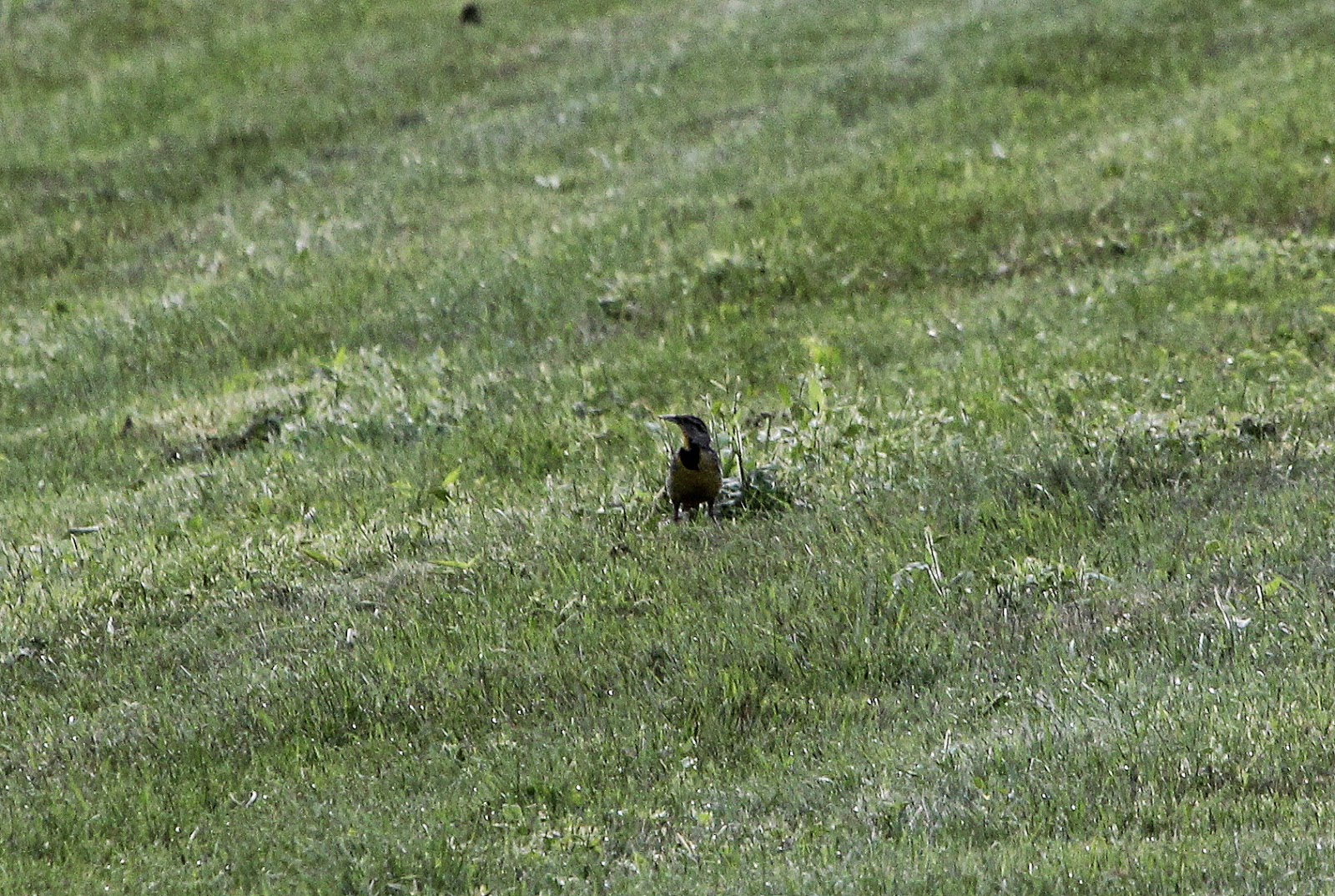 And they seem to be doing fine.  As of this past Monday, they've mowed all the grass, but the birds are still hanging around. 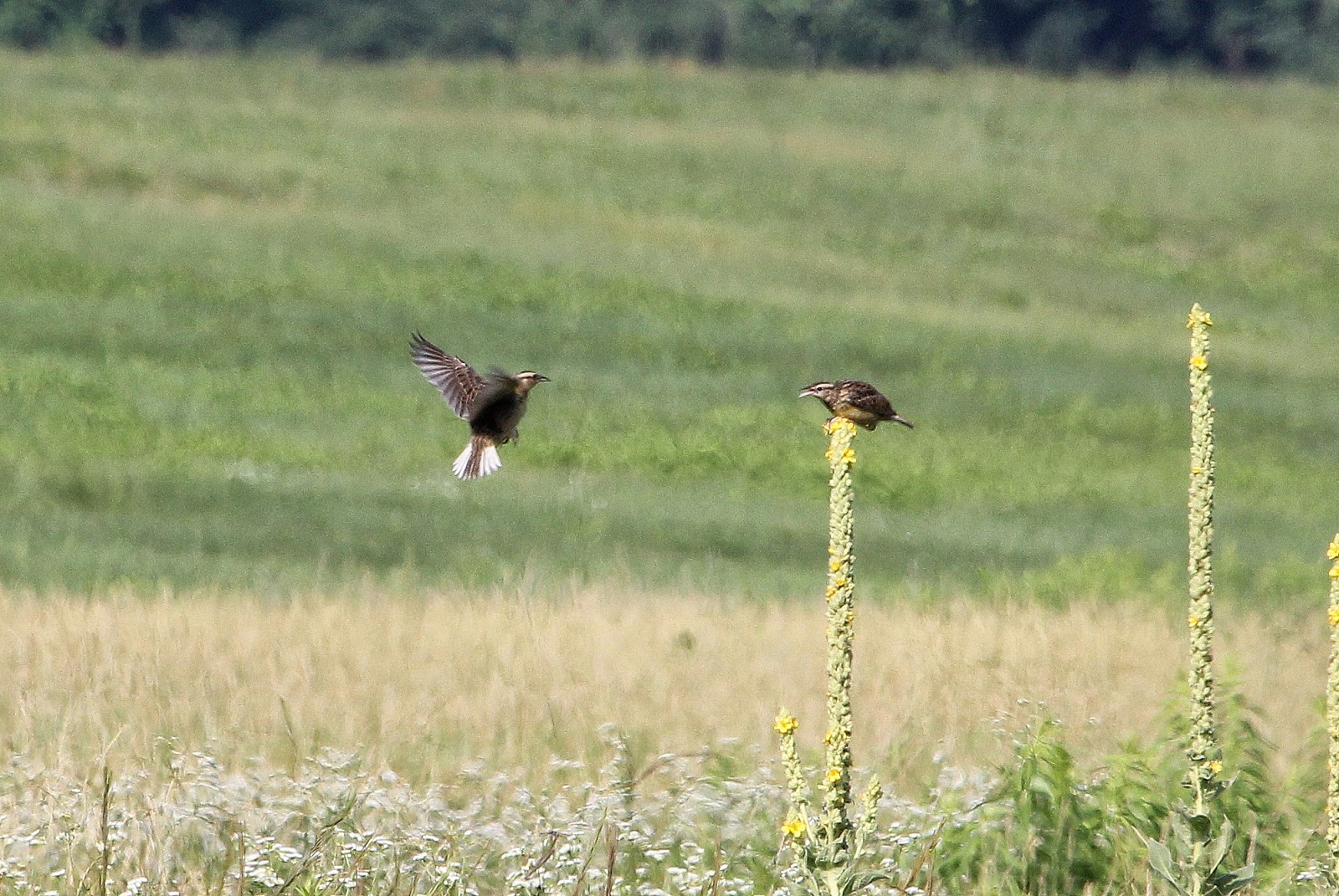 We've also had Blue-fronted Dancers along the wide pathway just by the end of the forest edge. 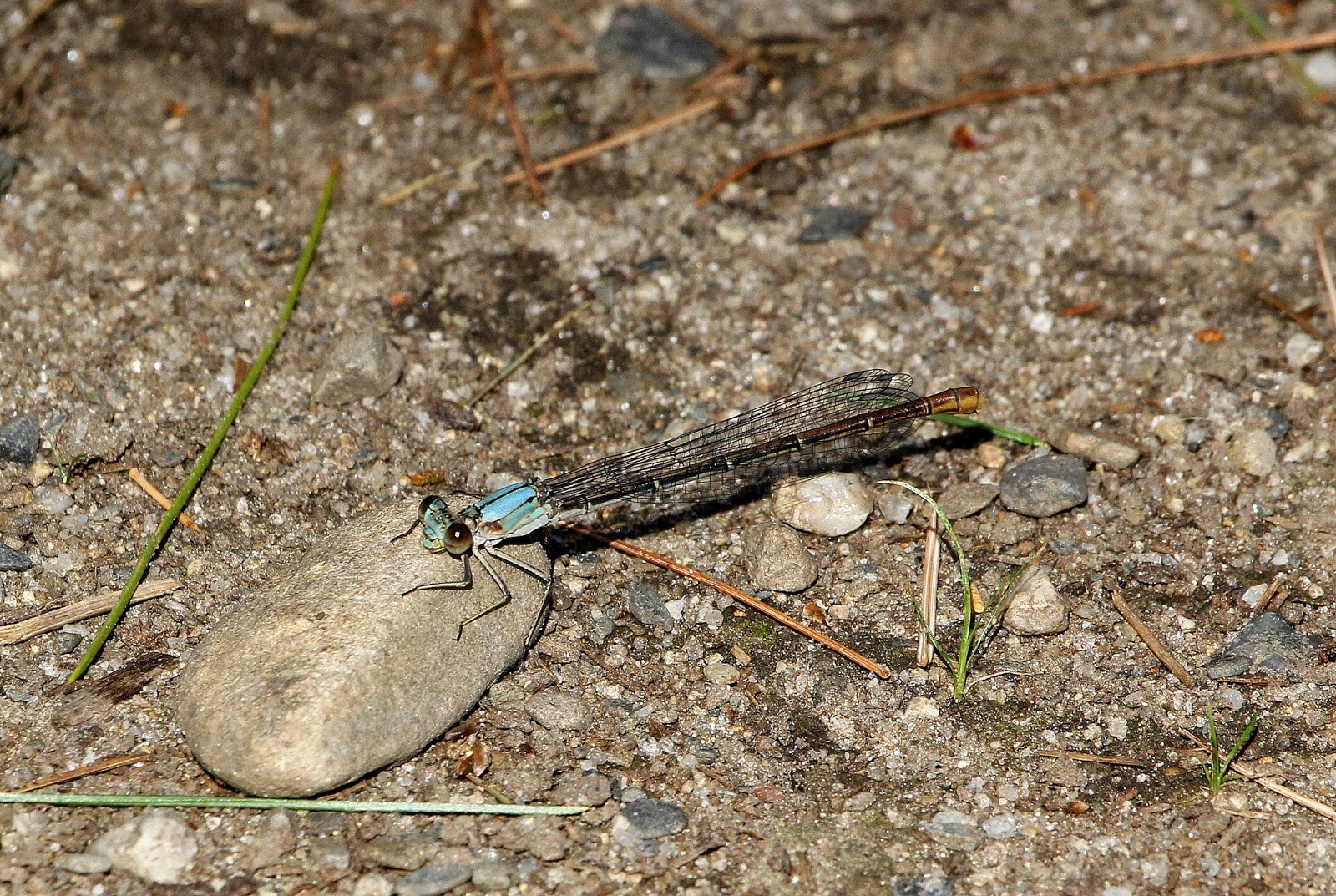 Up on the dike at Gate 39 we finally saw our first immature Bald Eagle this past Monday....I was beginning to wonder since we hadn't seen an adult for months. 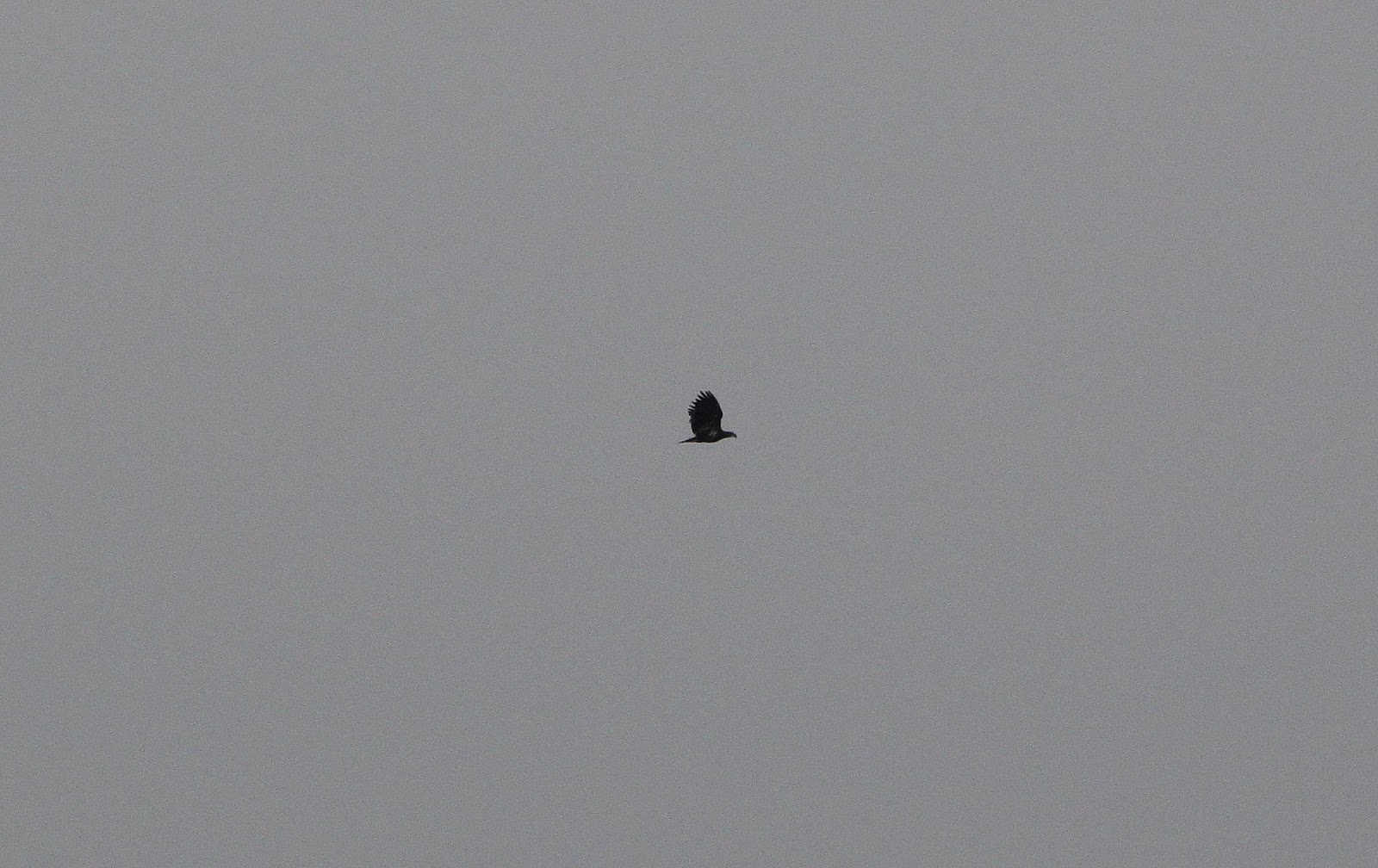 One of the joys for me was trying to photograph Chimney Swifts.   They seem to favor the dikes at Gate 36 and 39, flying with the swallows and some coming quite low in search of food. 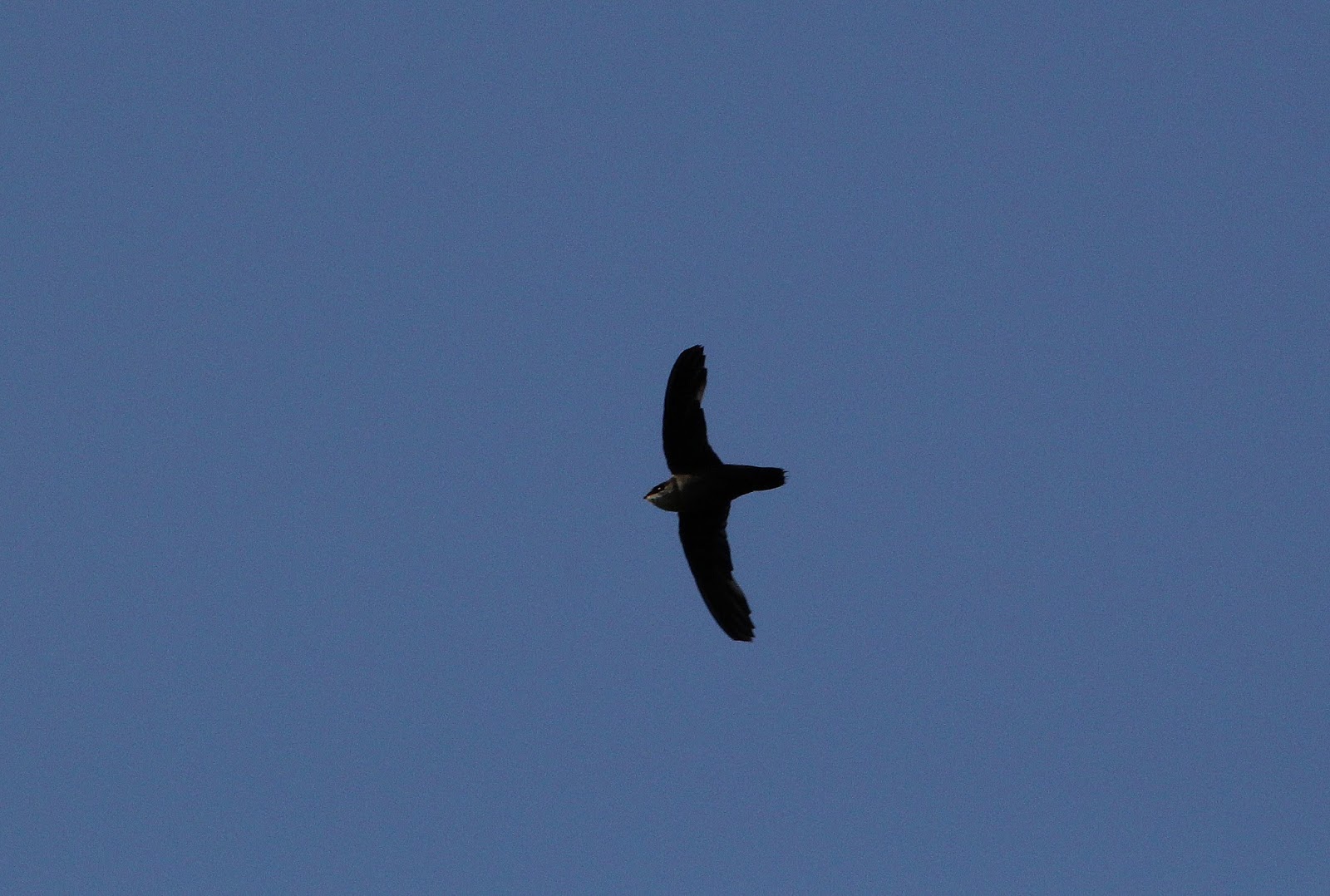 Since you never get to see these birds sit still, I always feel great about getting a clear shot of them on the wing. 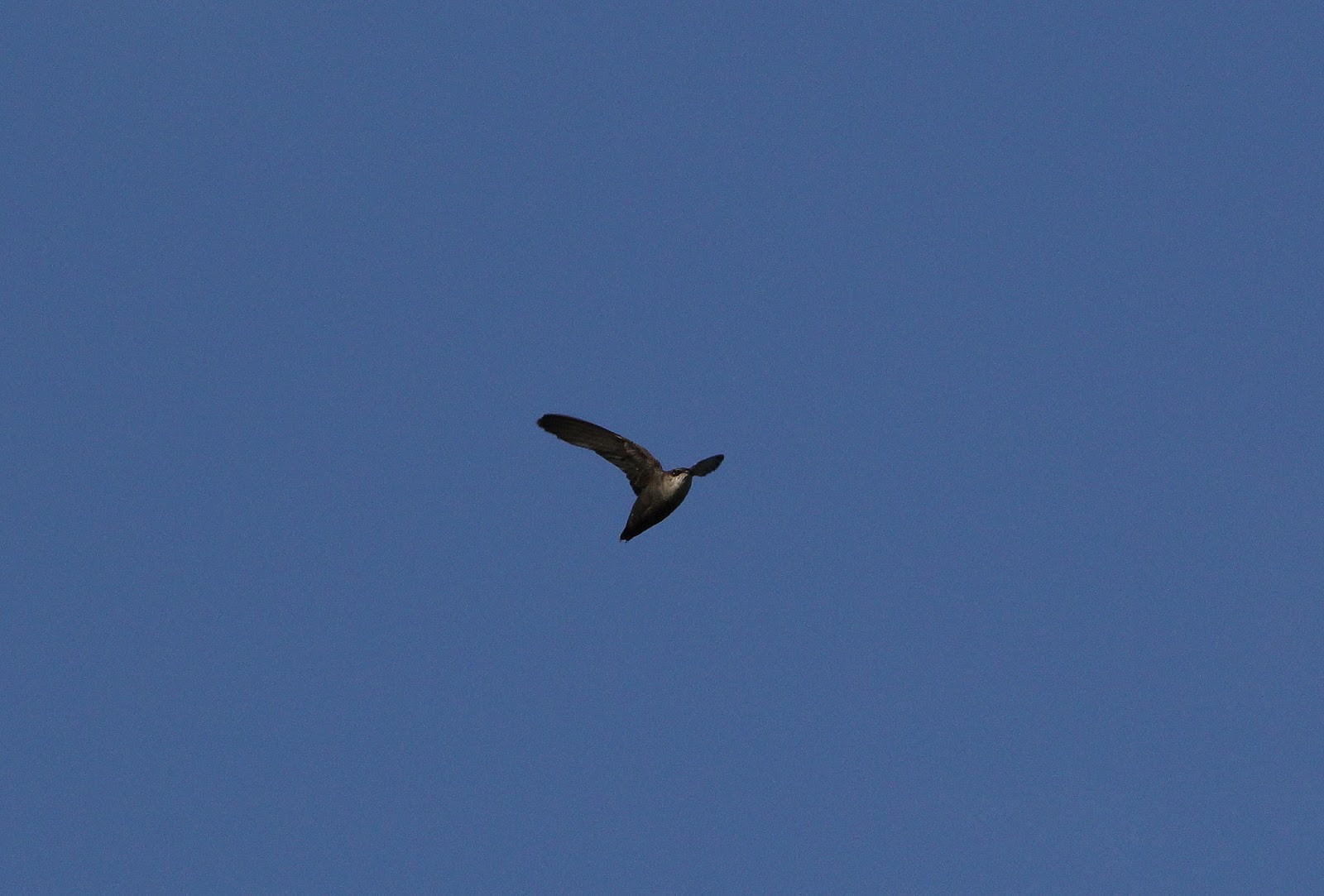 There's also been a nice show of  Butter-and-eggs at Gate 39.  This interesting member of the Snapdragon family has a orange path on the lower lip that leads to nectar and is call a "honey guide" for insects. 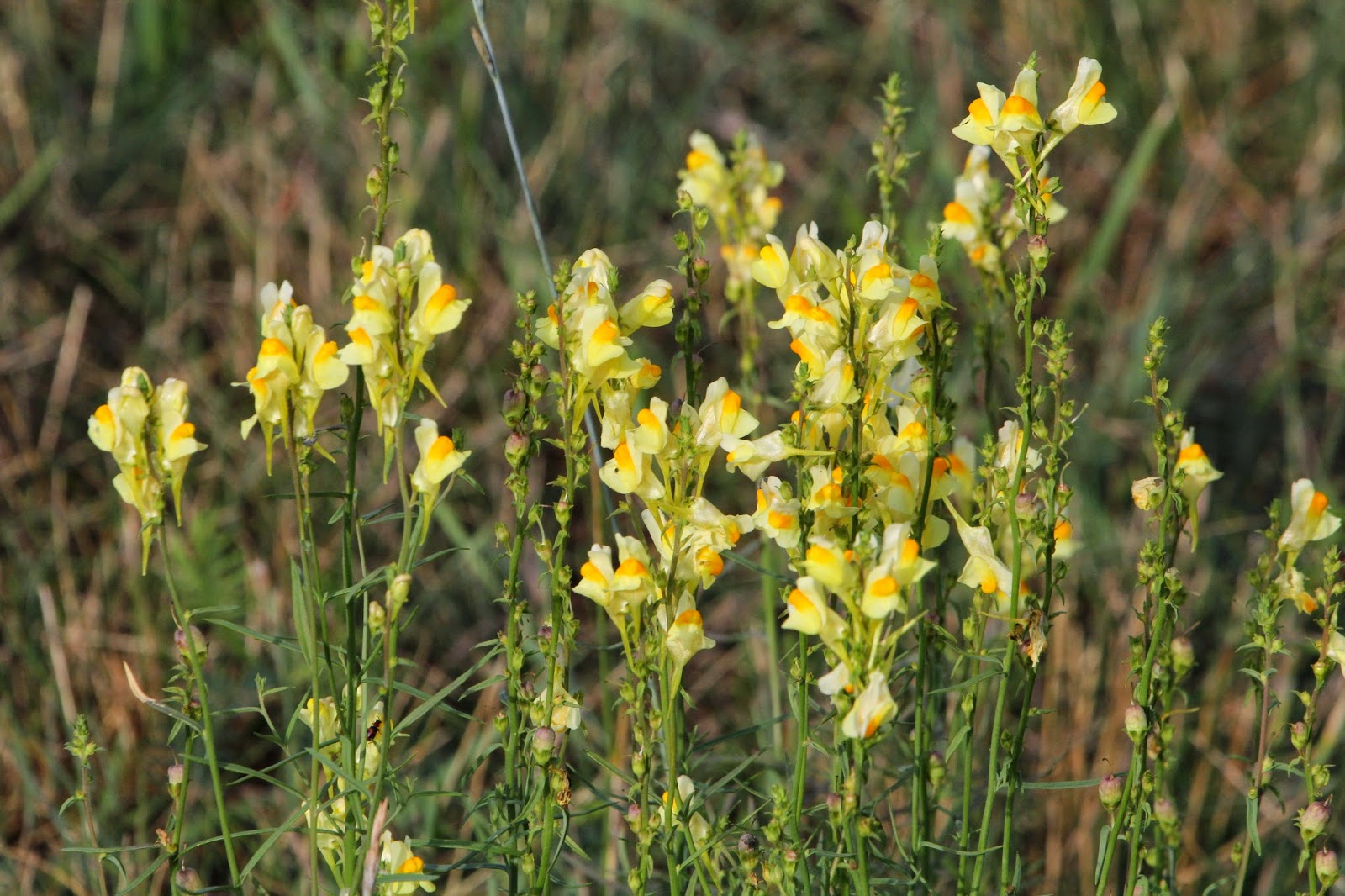 Mark continues to hike out to Scar Hill Bluffs on the east side of the reservoir and I usually poke around the cemetery after I park out on the road.  There were a family of crows under the pines and this crow allowed me to add to my "photos of birds of gravestones" collection. 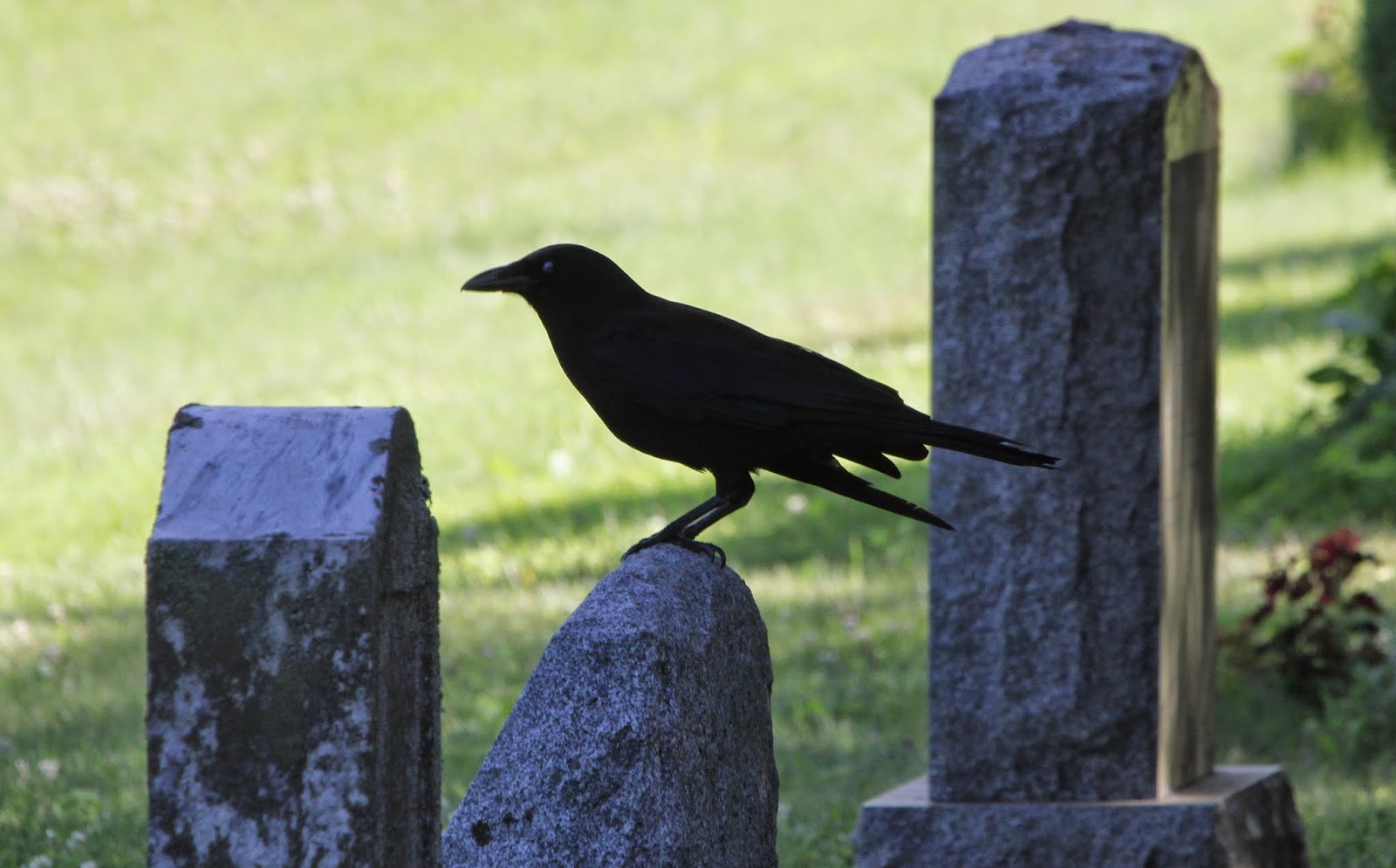 One of the more interesting sights we've had on two different trips was a swarm of Eastern Cicada Killers. 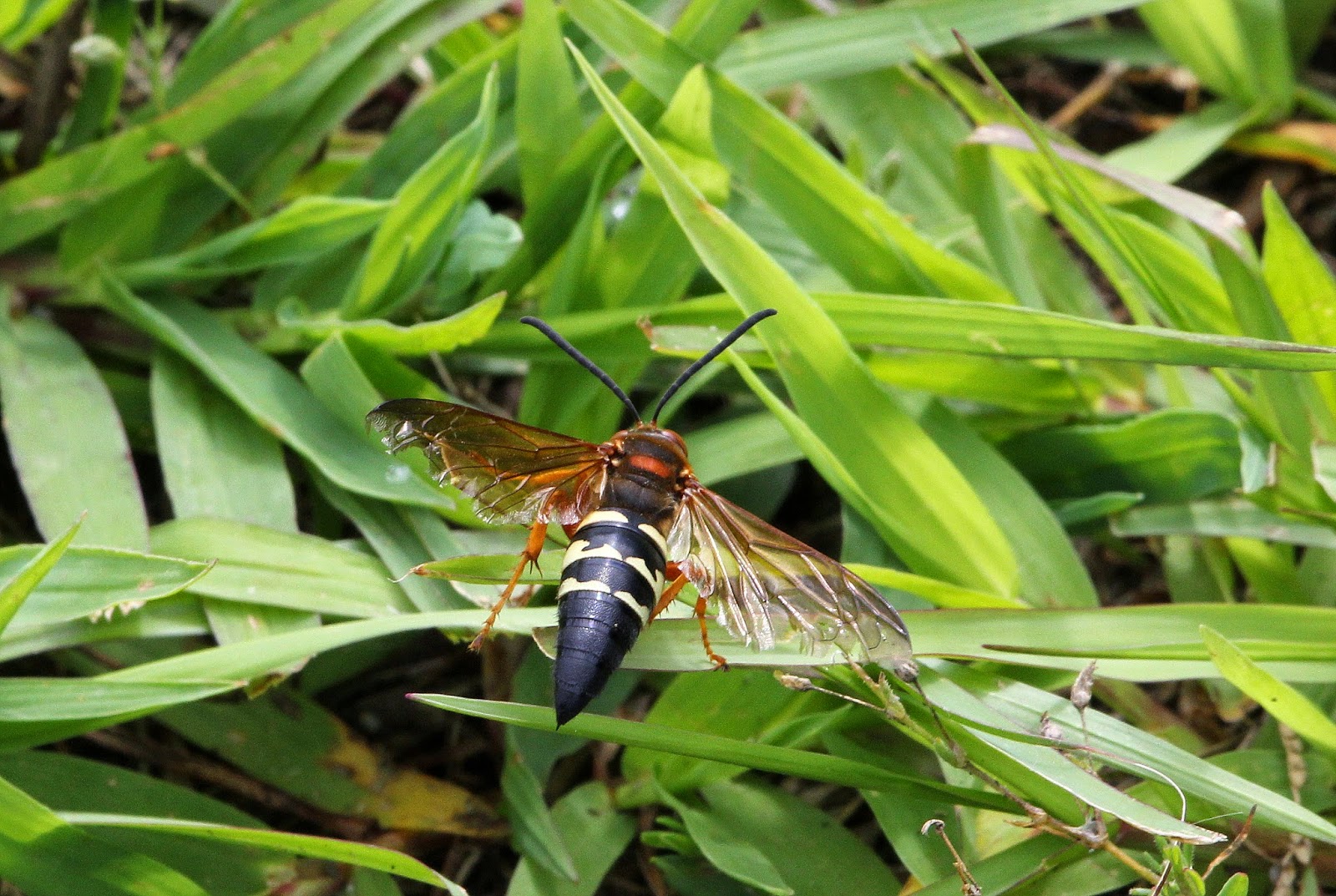 I have to admit I normally don't like to get to close to bees, wasps, hornets and the like so when I saw this one VERY LARGE wasp I was a little reluctant to get too close.  But I did want a photo since it was quite unusual looking.  Suddenly I heard buzzing over the my should and turned around to see 25-30 of these digger wasps moving over a grassy knoll among the gravestones.  So I decided I'd wait for Mark to finish his hike and we could do this together. 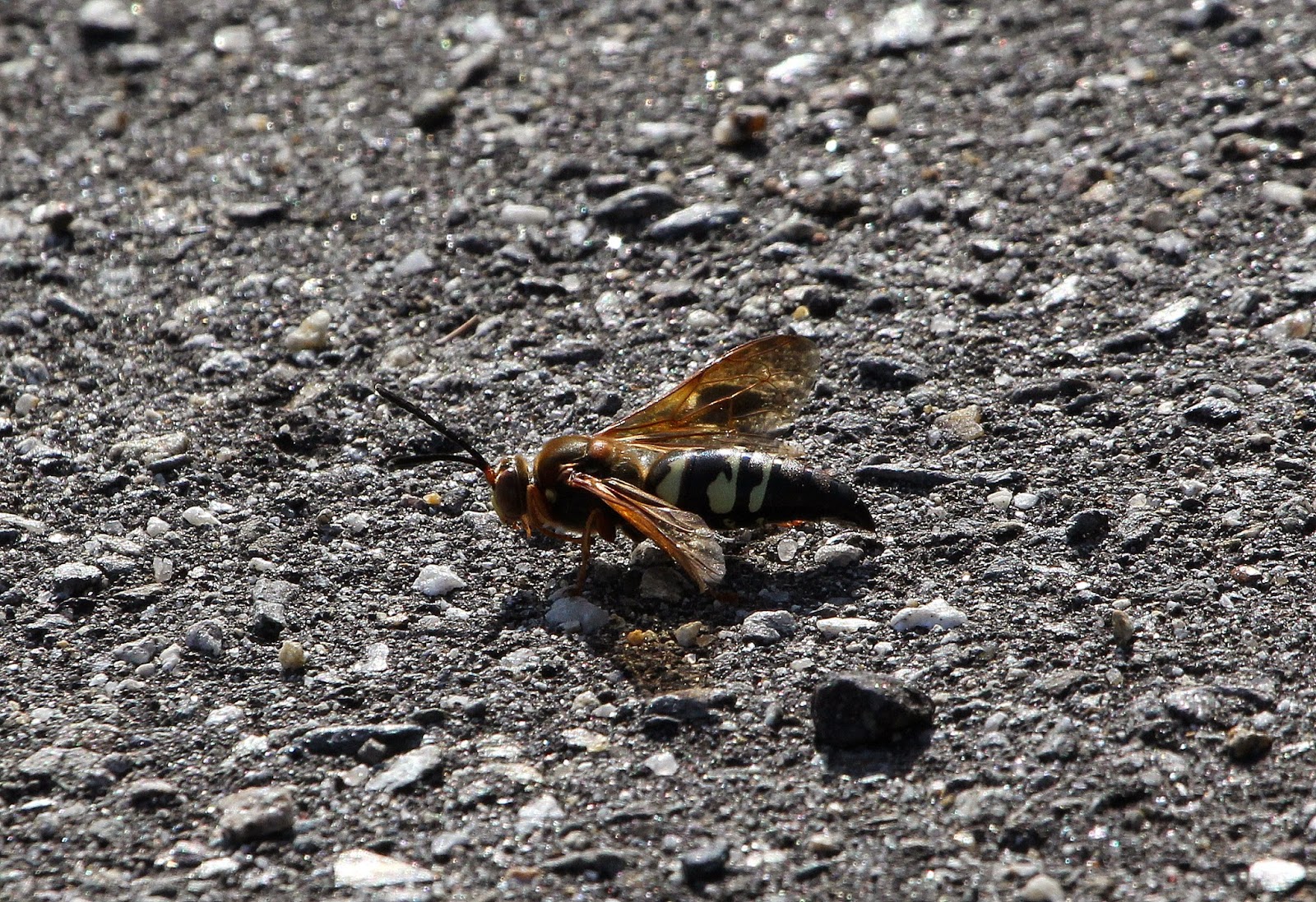 It was Mark who immediately identified it as a Cicada Killer and when we researched it back at home we found that colonies of these solitary wasps can number over 100 and they dig their nest hole up to four feet deep.  I certainly hope that the cemetery workers don't have any graves to dig in this particular area! 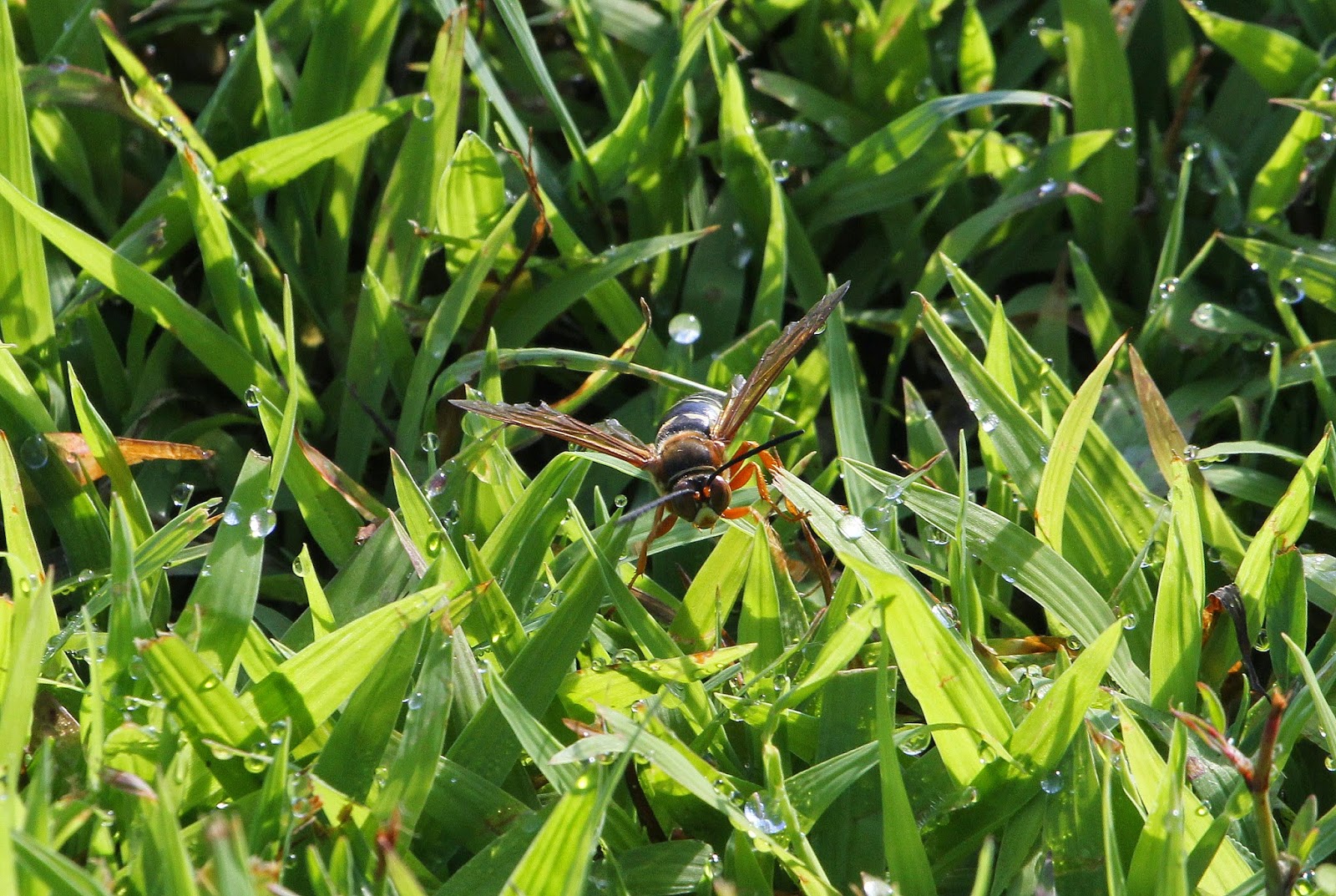 At Gate 17 the Familiar Bluets were still flying -- always cheery 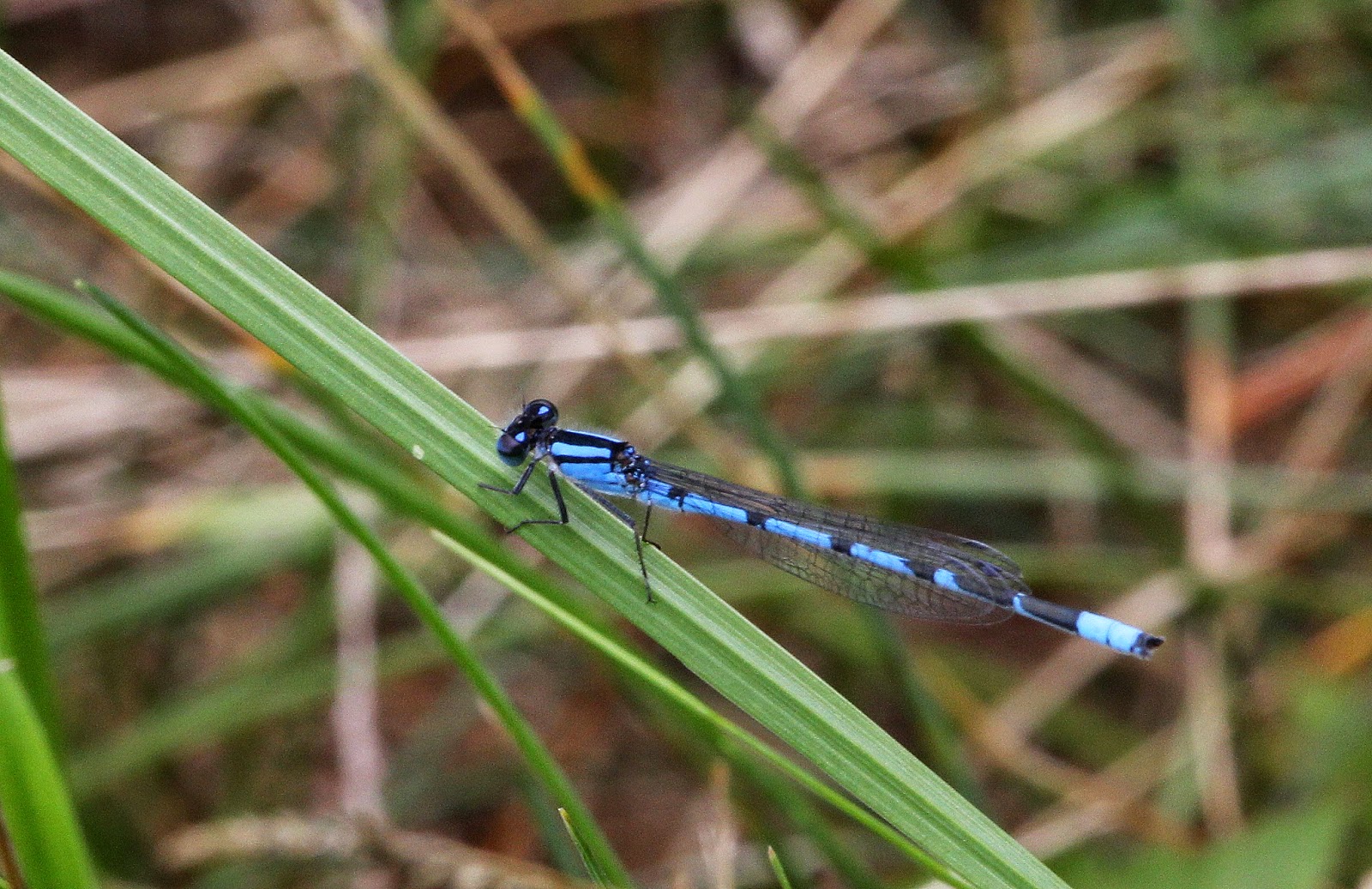 A quick run out to check water levels at Bolton Flats, allowed us to check on the land clearing that's been done at that small conversation area at the end of Pine Hill Road in Lancaster.  We did have one Vesper Sparrow and it appears that Kestrels bred successfully there.  Field Sparrows seems to be doing quite well and we watched this parent still feeding a young bird who seemed perfectly capable of feeding itself. 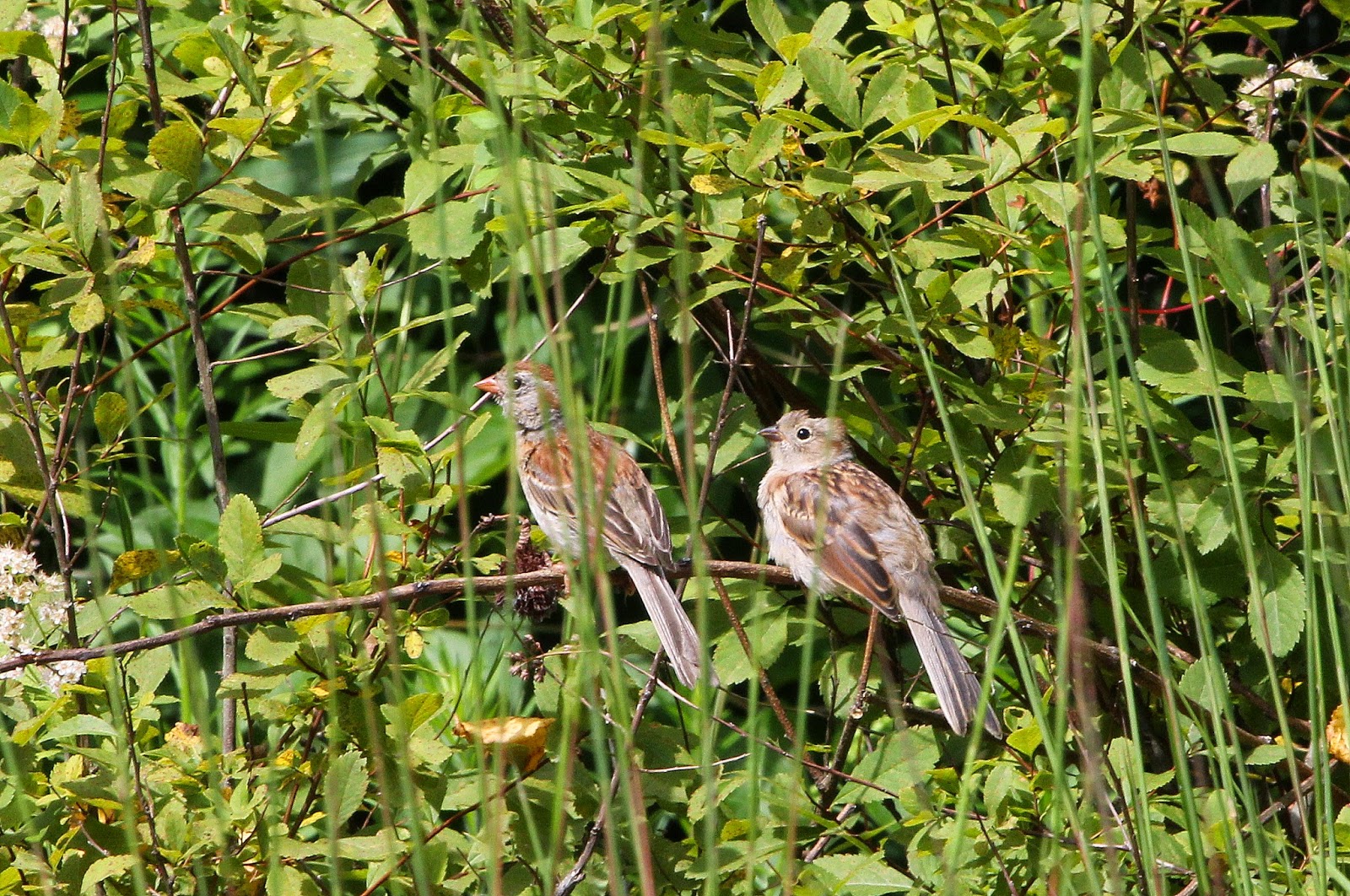 We also found a Streaked Tussock Moth, but couldn't tell whether it was dead or alive.  We did move it off the road just in case. 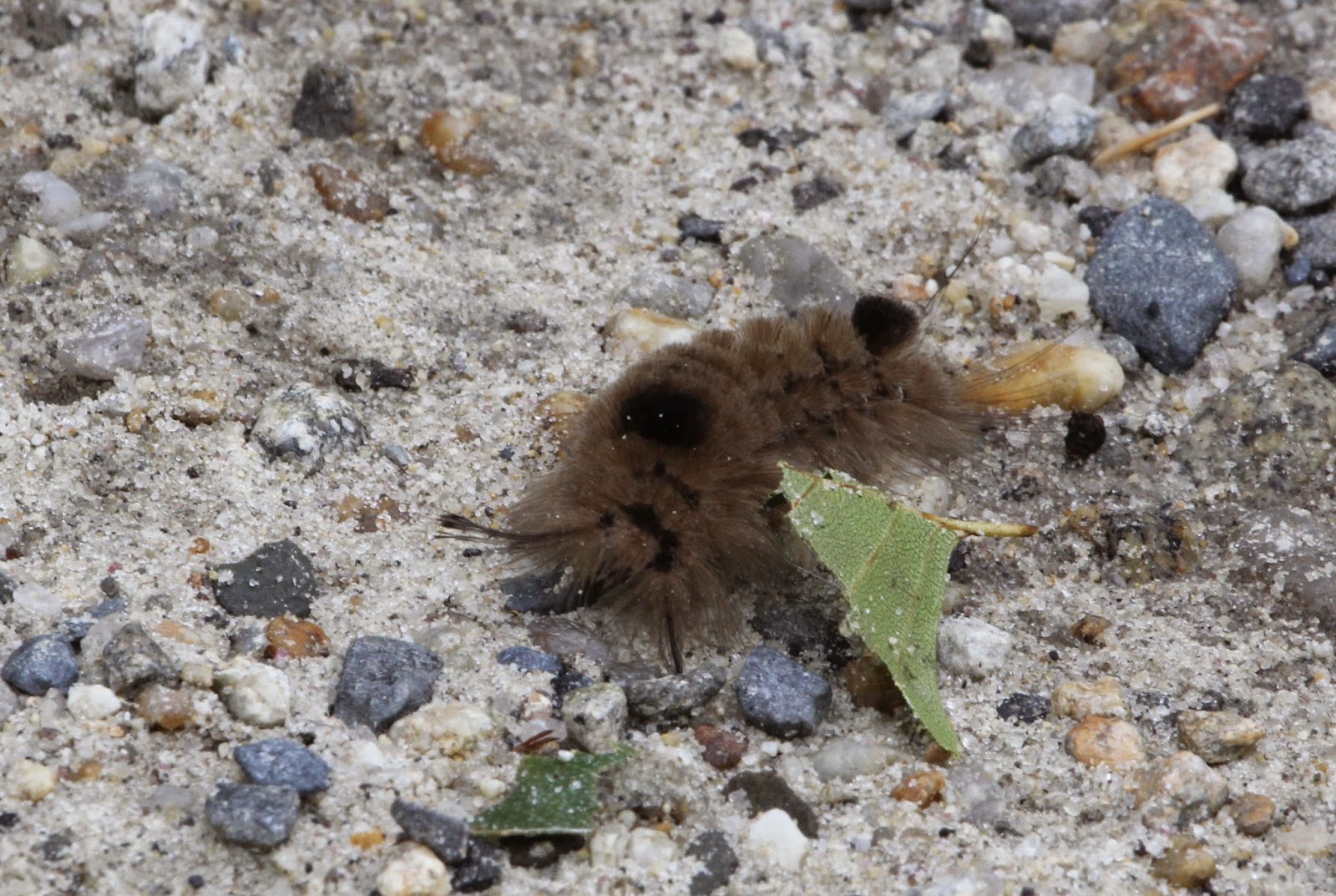 And in the open area we had a few butterflies....including this Viceroy 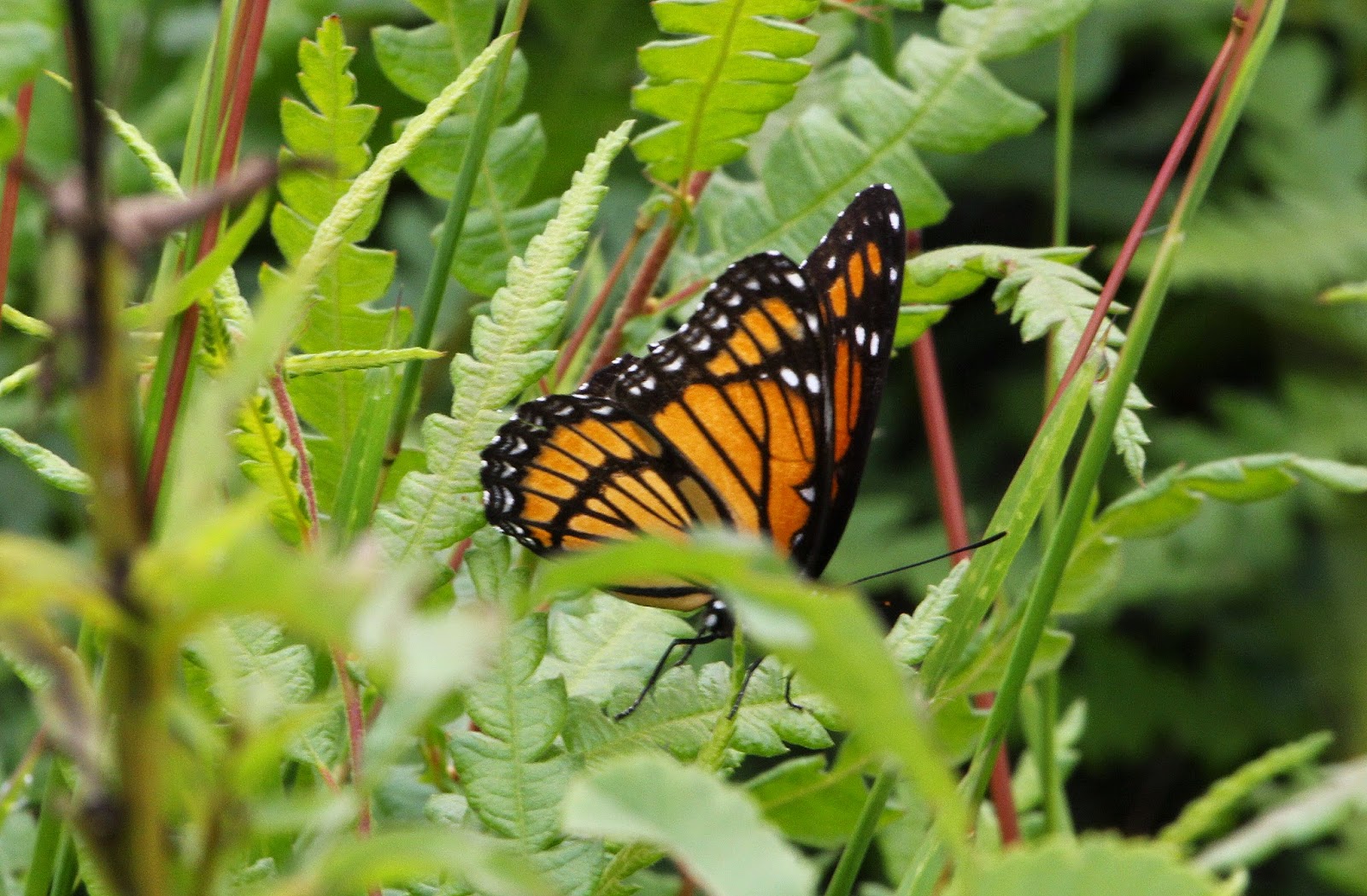 and this Eastern Comma. 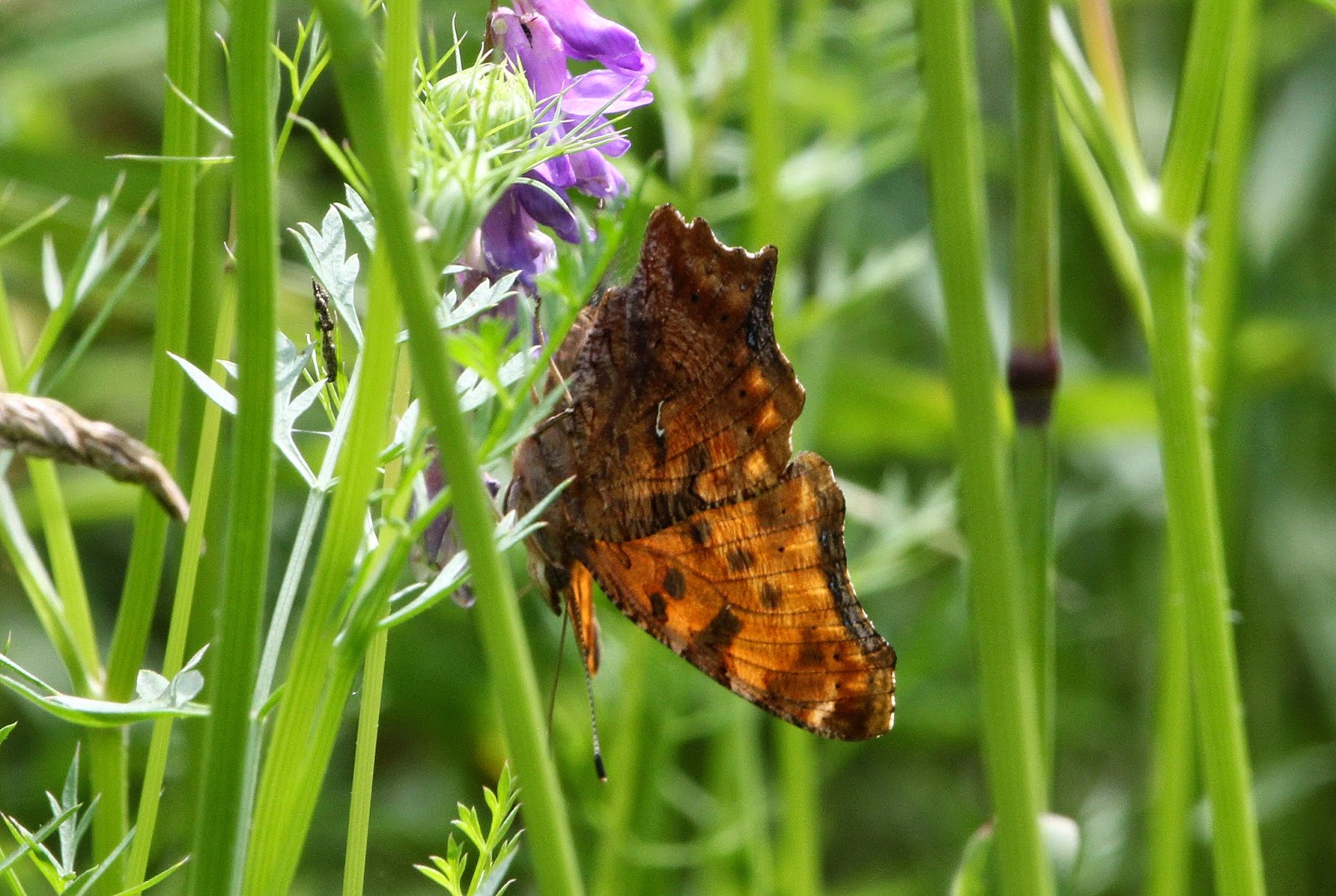 We had received a call from fellow birder Bart Kamp that there was a Glossy Ibis out at Sterling Peat, so we decided to check and see if it was still there the next day....and it was.  It's always nice to see such a typical coastal species so far inland.  We watched it feed for a while at the far end of the marsh and then it flew up into the big dead tree where you often see herons roosting and preened for a few minutes and then tucked his bill over his back and promptly went to sleep. 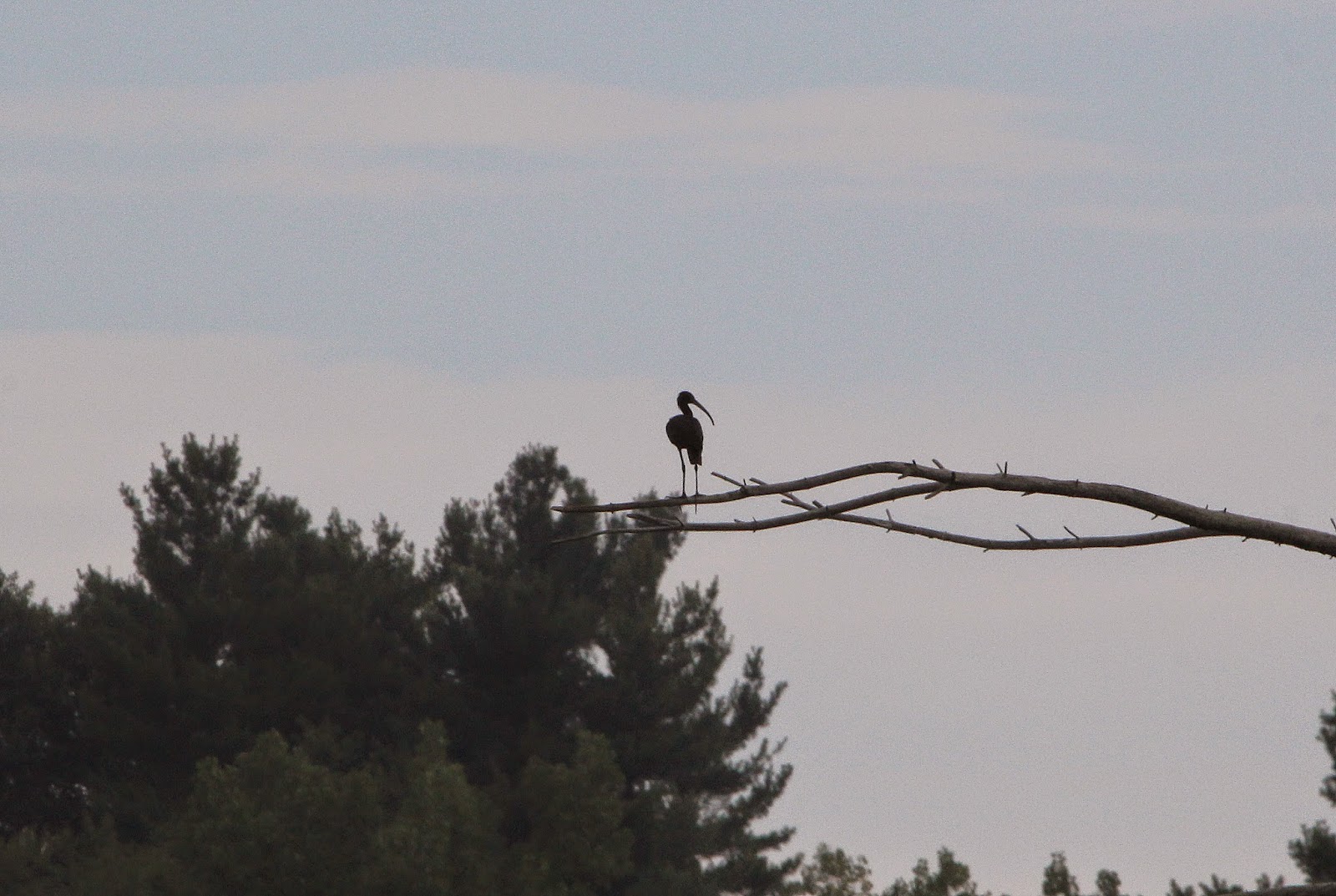 There were some shorebirds starting to build (oh, no it's fall migration)!  We had several Solitary and Least Sandpipers, along with Spotted and Killdeer...the latter two are likely breeders.  We also had a good number of Green Heron fishing in the dwindling pools.  And I saw my first Halloween Pennant of the season.  These are one of my favorite late summer dragonflies. 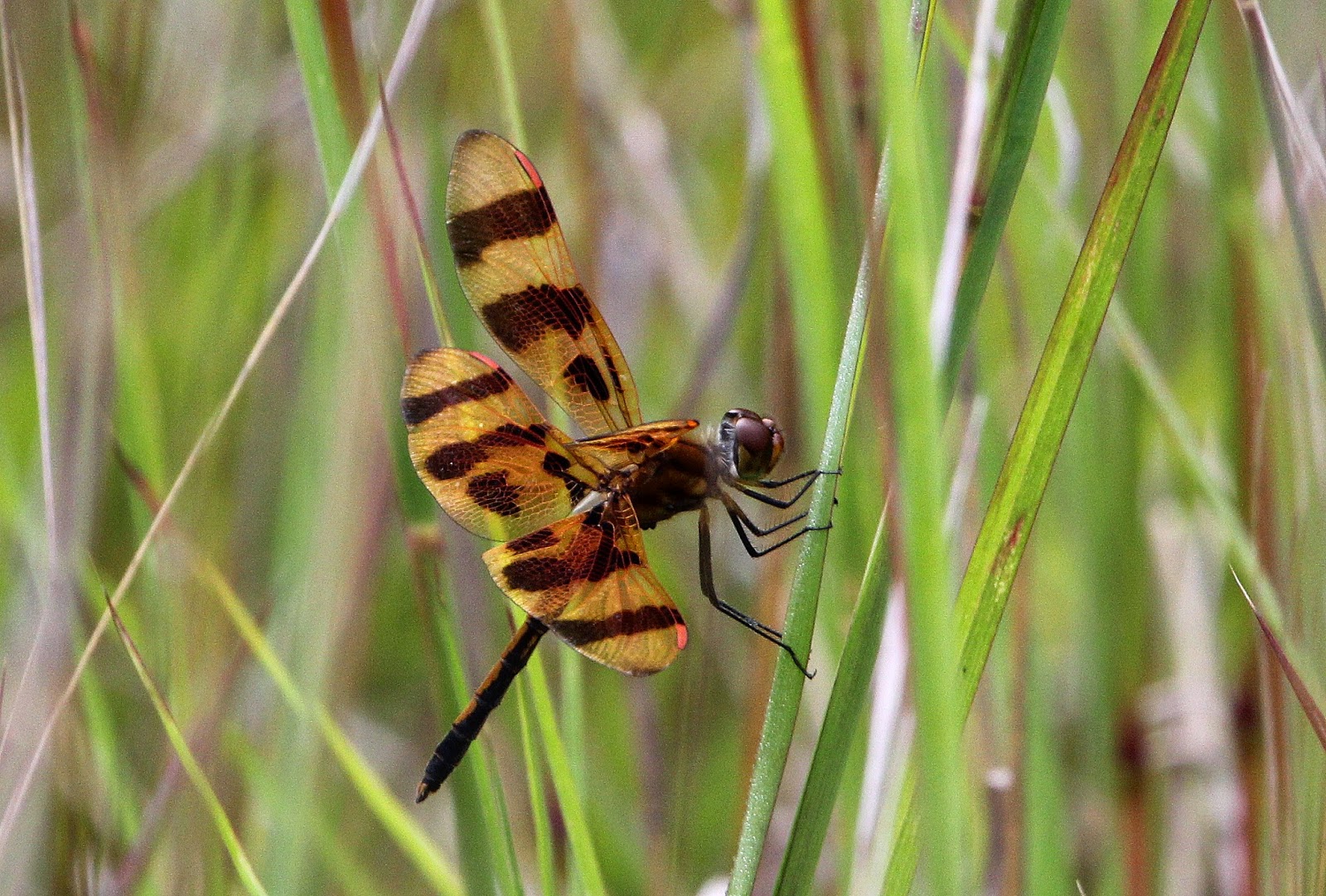 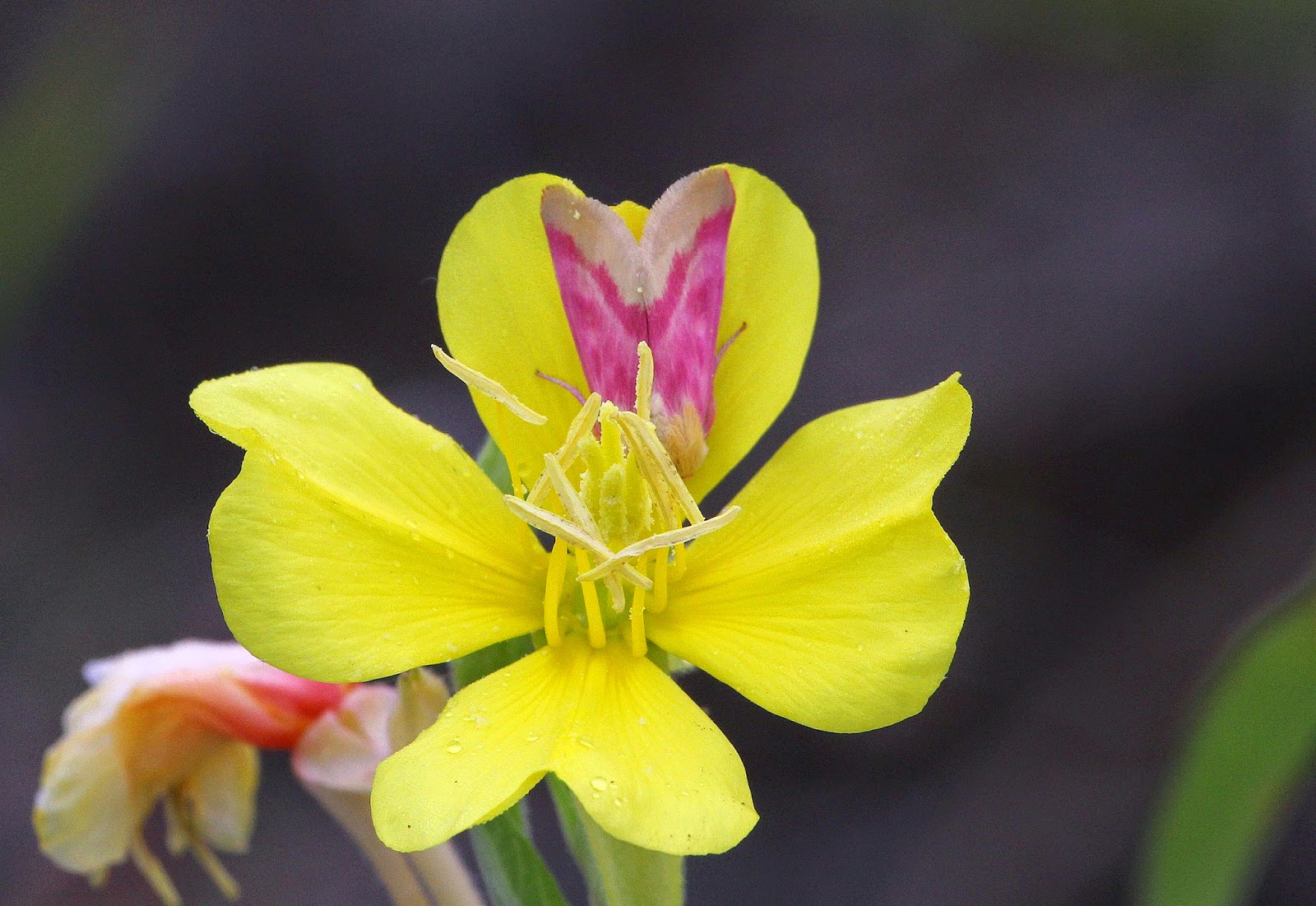 Here's a side view so you can get a good sense of what the moth actually looks like as well. 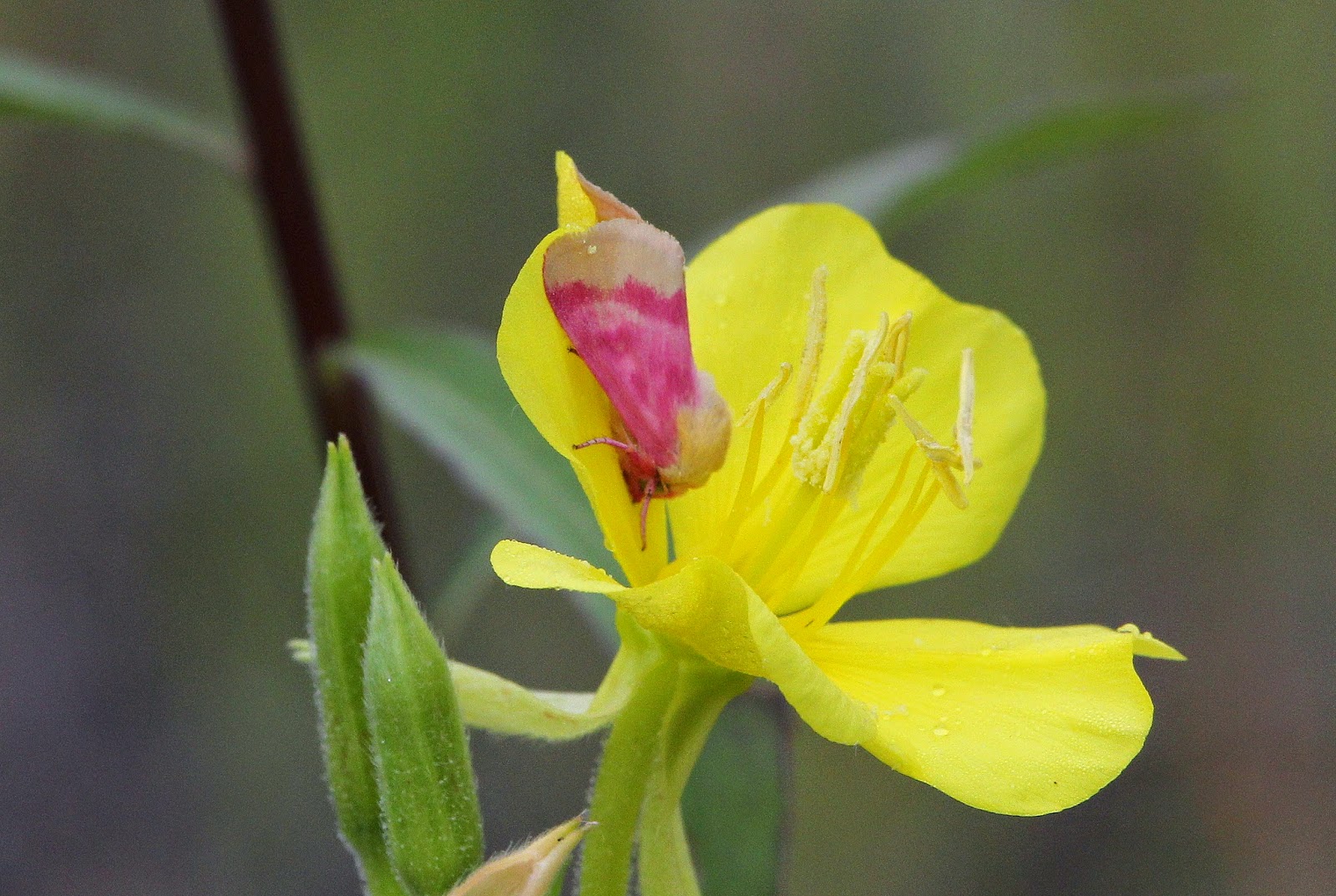 So even when things start to quiet down a bit during summer, there's always plenty to see...and all so close to us in Central MA.