Birding over the Labor Day Weekend

One of the advantages of a long weekend is that you get to sample lots of different birding areas, including some local ones. It seems that with all the atlasing we've done this year, we haven't been able to get much surveying done in the Blackstone Corridor. So we spent Saturday staying somewhat close to home, especially since we wanted to continue surveying nighthawks from the Rt. 56 overlook in Leicester.

Sneech Pond in Cumberland was rather quiet in the morning with just the usual gang of Wood Ducks in both the main part of the pond and the little back pond down the road by the powerlines. There was also a very inquisitive young Mockingbird that was not about to leave his favorite berry bush no matter what! We spent the morning looking for low water ponds in the RI section of the Corridor, but it seems like the wet summer has been keeping all the ponds high.; therefore, very little in the way of shorebirds. 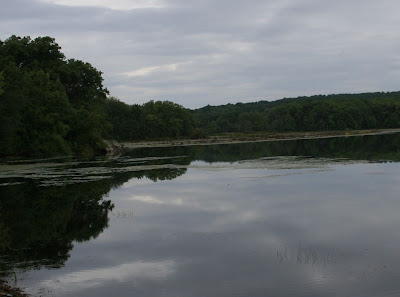 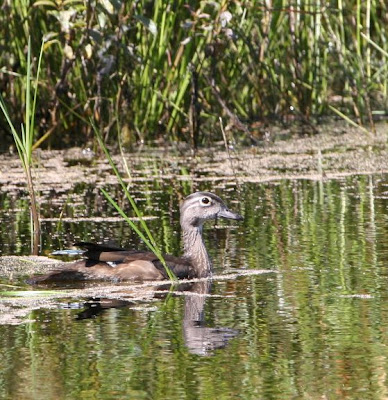 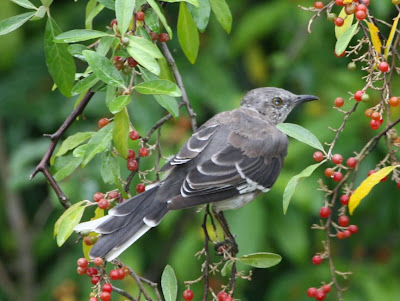 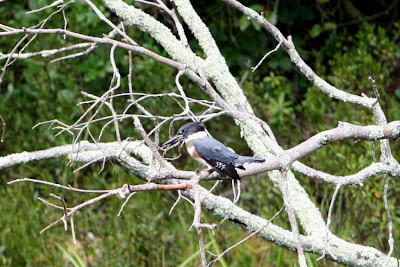 When we got to Rt. 56 we saw that the flying ants were starting to emerge from their ant hills and we thought for sure it would be a high count night.... But even though the ants were flying, we were disappointed with the show of nighthawks. I still can't figure out the right conditions under which these birds fly. 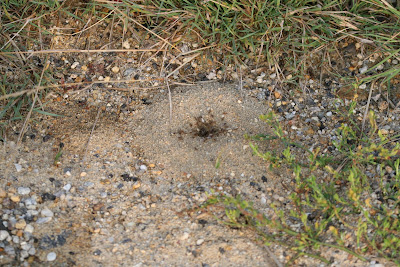 Sunday morning we decided to head out to Northfield and check the sod farms, hoping we would be lucky enough to get some Buff-breasted or Baird's Sandpipers. Alas, the sod fields were without shorebirds; I think this is going to be a very poor shorebird season inland. But the weedy fields nearby produced a variety of early migrants like this very alert Yellow Warbler....who appeared to be standing on tip-toes! Actually I think she/he is just getting ready to launch itself off the branch which is why it looks so wierd. We also had several Indigo Buntings and flocks of Bobolinks, all using the same weedy field right along the road. 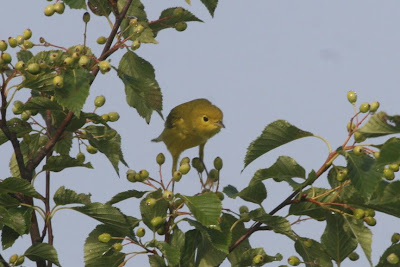 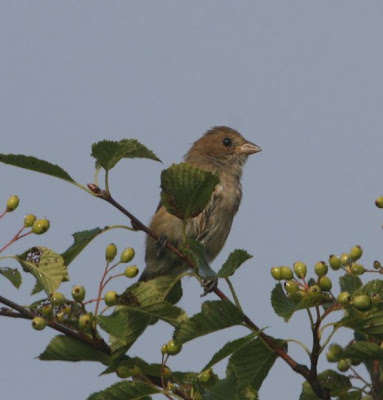 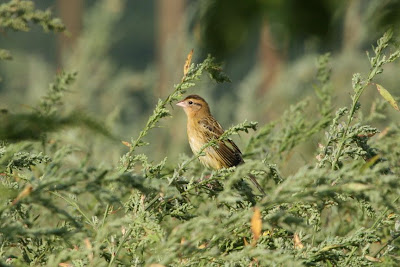 A quick side trip to Turners Falls Airport produced nothing more than this lovely American Copper. 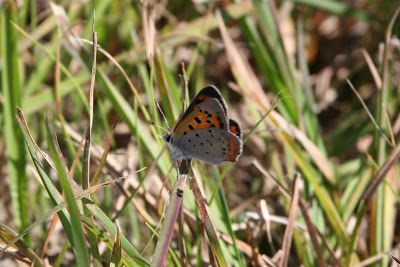 However, our real destination for Sunday was to explore Satan's Kingdom. People think we just make this stuff up, but if you check the Western Mass birding guide you will find complete directions in section C7. Northfield under "Hell's Kitchen and vicinity. It's a wonderful WMA with a series of ponds and wooded swamps....regularly hosting Olive-sided Flycatcher in spring and fall. And we weren't disappointed! 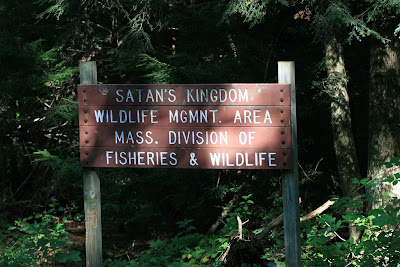 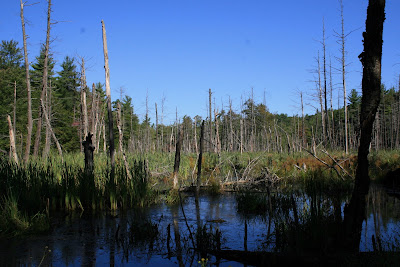 Now Satan's Kingdom may not sound like a party place to you, but since we've been going there (every couple of years or so) one of the highlights is to look and see how the party-goers are progressing with their beer cap tree. I'm not sure I have "documentation" of the progress, but one thing we noticed this time is that almost all of the bottle caps were Corona. Maybe we need to start calling it the Corona bottle cap tree! 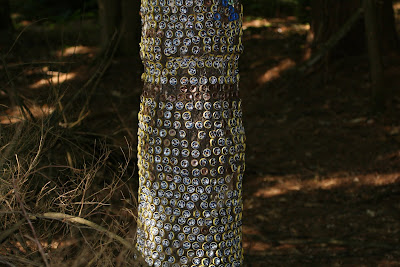 One of the mystery signs we came across as we were heading along a back road in Northfield was this very stylized road sign. Mark and I have different theories about the sign -- I think it's about being cautious since there are birds crossing the main road and Mark thinks there are letters hidden in each sign and there's a mystery message. Anyone who can shed any light on this will be our hero. Until then, this photo will get filed along with the ATM "tree" in Greenfield as strange photos. 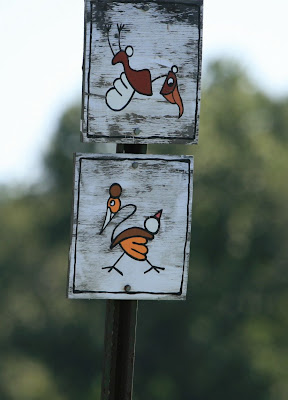 On the way home we made a quick stop to see how the hawk watchers were doing at Barre Falls Dam. Still early in the season so not much was flying....but we spent some time talking about the Mississippi Kites from NH which will surely pass this way! 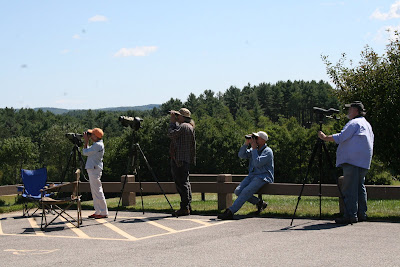 Monday's birding got screwed up due to house painters who didn't show, but in the afternoon we went to Winchendon to survey a block that hasn't been atlased yet. Things were very quiet, but the Otter River WMA seems like a great area to bird. The highlight was a Black-billed Cuckoo flycatching along the river. On the way home we found several ponds with a variety of bladderwort we had never seen -- Purple Bladderwort (Utricularia purpurea). Bladderworts are carnivorous plants of bogs and shallow ponds and some of the areas along Rt. 140 in the Princeton/Sterling area seem to fit the habitat. 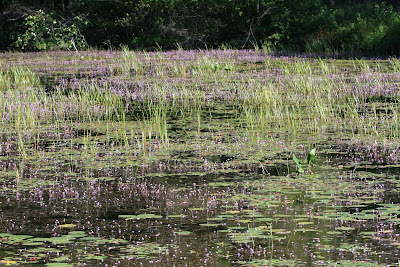 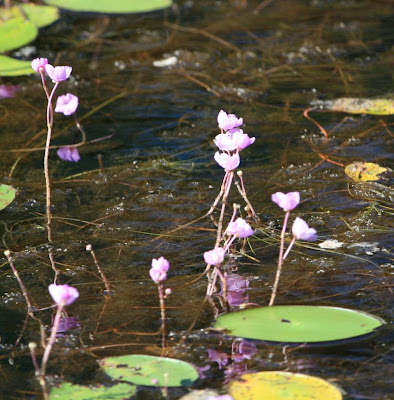 A very nice, quiet weekend to end the summer. Now it's time to get ready for fall migration, Mark's birding class and thinking about Christmas Counts...YIKES!

Posted by Sheila Carroll at 8:17 PM