Okay, I am soooo late getting this post up from last weekend, but it contains a lot of photos and it took me a while to get through that process....let alone write about our trip. But here I sit at 4:30 a.m. BEFORE I get ready to go out for this weekend's trip and I'm determined to get caught up! So I realize that my first photo is not a bird, but it was one of the first animals we encountered as we were exploring some atlas blocks in Dartmouth. My friend Valerie is considering raising alpacas, so whenever I see an alpaca (or llama) I'm fascinated by what they're doing and what it takes to keep a small herd. Plus I love to add to my growing catalog of domestic animal photos! 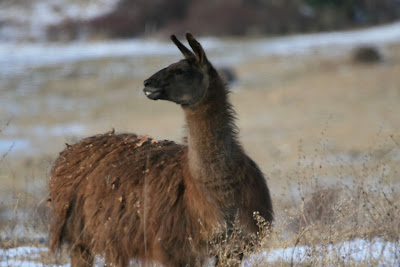 As I mentioned, we decided to check out some atlas blocks in Bristol county for the purpose of "block busting" in the upcoming atlas season. Bristol county is alarmingly uncovered in the current Breeding Bird Atlas, so we thought we would try to lead small teams to cover an entire block in one day for the atlas. The area has some wonderful habitat and it would be a shame if it doesn't get censused for the atlas. 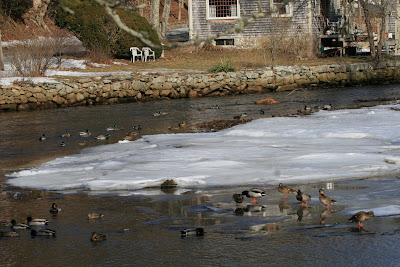 Also we love to head down to southeast coast in January in the hopes of escaping some of the snow in Worcester and "pretend" it's almost spring. We had several hundred mallards in this little eddy of the Slocum River along Horseneck Road in Dartmouth. 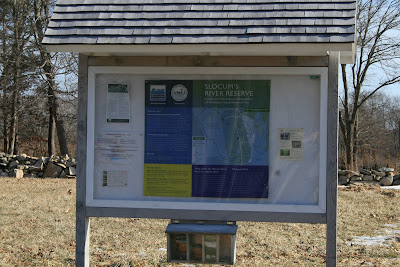 One of the wonderful things about this area is the active local involvement in saving the open spaces. The Trustees of Reservations has been working very closely with both the Dartmouth Natural Resources Trust (DNRT) and the Westport Land Conservation Trust to save many of the old farms and open field areas in this section of Mass. 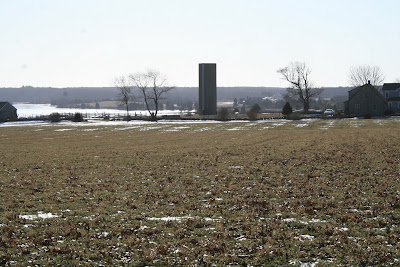 Slocum's River Reserve is one of the results of that partnership and it's a wonderful farm area which goes down right along the river. In spring this place is hopping since migration is a key highlight, but it will be interesting to see how many species of birds stay to breed. 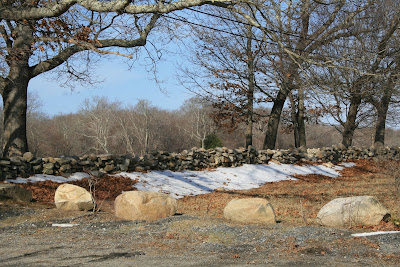 Even on a sunny day in winter (okay I'd admit it's still winter) we had more than a dozen Carolina Wren singing and it certainly felt spring-like. 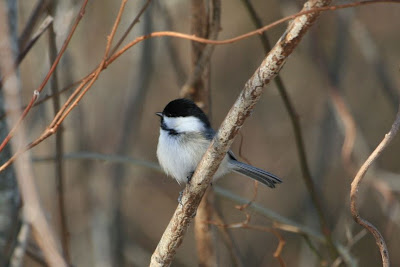 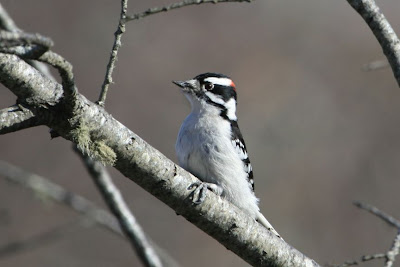 And even the Downy Woodpeckers were looking pretty perky! 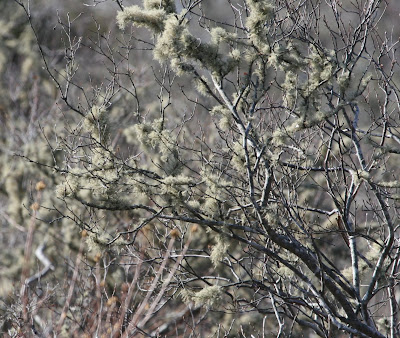 As we drove down many of the back roads, you came across lots of wet woodlands and there were lots of patches of Usnea lichen on the trees. This is the species of lichen that Parula Warblers use to build their nests, and it's believed to be the decrease of this lichen in the Northeast may be the key contributing factor to the steady decrease of breeding Parulas. Any current breeders are believed to be restricted to some of the offshore islands (like Naushon...maybe the Vineyard). The interesting thing about Usnea sp. of lichen is that it is used as an immune-enhancing tonic (similar to Echinacea). But I digress.... 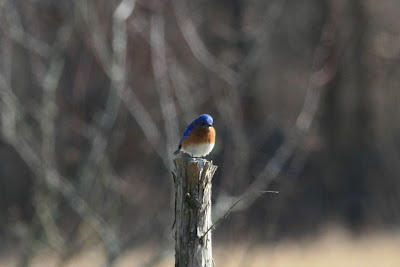 Bluebirds are pretty widespread in Westport-Dartmouth area, and I never cease to be amazed by the color blue you can find on a male bird. 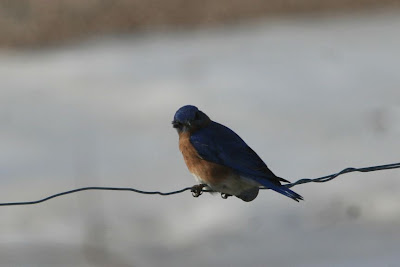 They are such little colorful thrushes, especially when you compare them to our three more common woodland thrushes (Veery, Hermit and Wood). They often remind me of the European Robin -- even more than our American Robin does. 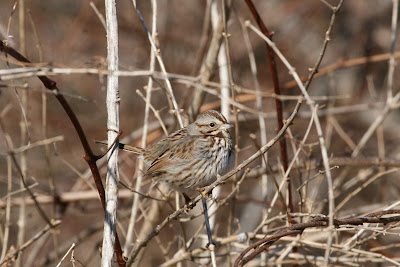 There's a wonderful set of thickets at the end of public way on Barney's Joy Road (past Demarest Lloyd State Park). In addition to the Song Sparrows and multiple Carolina Wren, we found a couple of over-wintering Towhees. 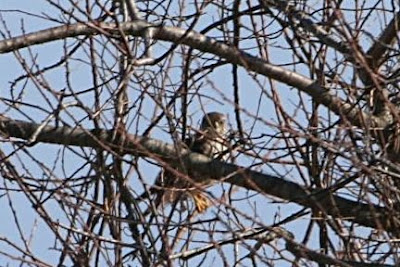 Heading back out Horseneck Road, we moved over to Allen's Pond in Westport and were delighted to find a small group of Eastern Meadowlarks hunkered down in the fields. The wind was blowing fairly well and coming in off the water it was definitely CHILLY. Of course this Merlin loved the breeze and was definitely hoping to find some shorebirds hunkered down so he could get a good meal. 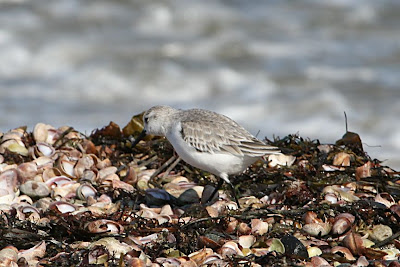 As we checked out Gooseberry Neck were found some nice flocks of shorebirds that the Merlin obviously hadn't disturbed. Close locks at wintering Sanderlings is certainly to be expected. 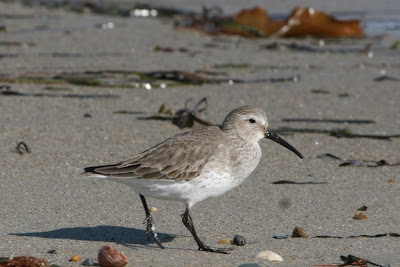 And having really close views of Dunlin is always nice. Especially when you can check out the decurved bill at close range. 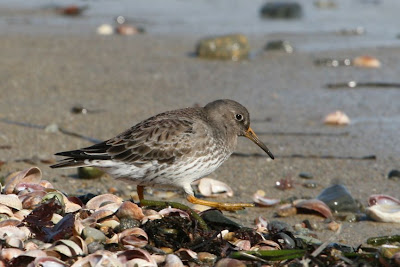 But the real treat was to find Purple Sandpiper walking along the beach and working the rack line with the Sanderlings and Dunlins. 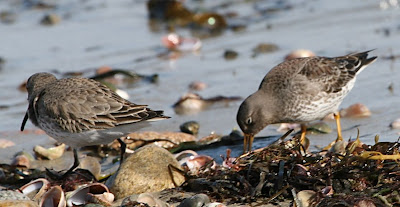 I know this is the closest view I've had of these birds together working the shore. 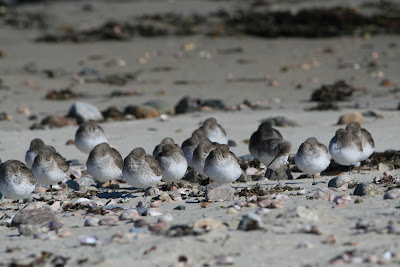 Even a group of sleeping birds can help your shorebird identification skills. This is a subset of a flock of about 125 roosting Dunlin -- can you spot the one shorebird that's not a Dunlin? 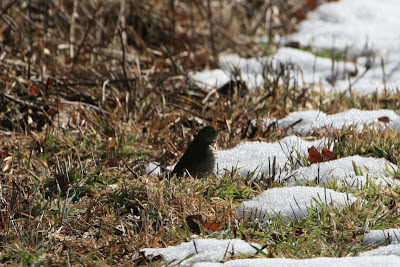 As we headed to Acoaxet we stopped and ate lunch at a little pull-in on the Adamsville Road. Unfortunately I don't remember the name of it, but it's signed and I think has something like "Henry" and Homestead in the name....but don't hold me to it. Anyway the point it not the name of the place but the small flock of Hermit Thrush we had there. They kept popping in and out of the thickets and feeding on stuff (snow fleas?) in between the snow and grass tufts. Another over-wintering bird that's made it through! 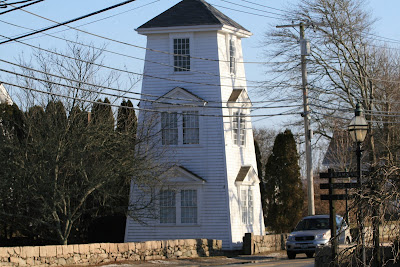 I know I've shared my photos of the "chicken" monument before, but right at the same junction (Adamsville Rd. and Old Harbor Rd. -- technically in Rhode Island) is this unusual structure known as Spite Tower. I found there are tons of stories about various "spite" houses that have been built all around the country, but this one has a rather unclear past. Some reports talk about it being nothing more than a house covering a well, basically a water tower. Others talk about the feud between Dr. John Hathaway and the Manchester family, unrequited love and a tower built to block the view of someone signaling a family member for dinner. All I know is that it's very odd looking and I'd love to go inside and see how it's set up. 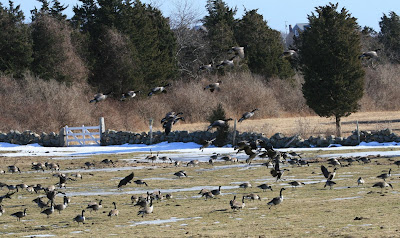 We had large flocks of geese in some of the fields of Acoaxet. This flock along Brayton Point Rd. just kept getting larger and larger...but nothing unusual could be found. We stopped here on our way to check out the little end of Brayton Point Rd. which is in a minuscule atlas block. Mark and I have a bet going as to whether or not we'll get more than 10 or less than 10 breeding species in this mini-block. 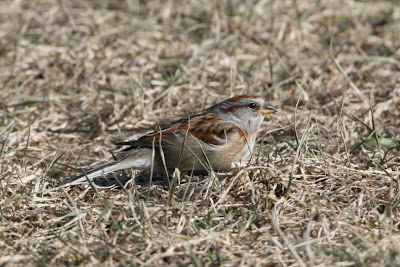 Tree Sparrow certainly won't be one of the 10 we believe we'll get, but it's still nice to have it visiting in winter. 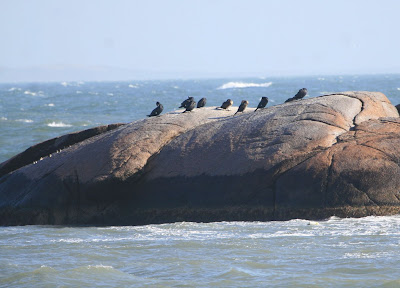 Just offshore are a series of large rocks that hold wintering Great Cormorants. The reason I added this photo was so you could see the small flock of Dunlin on the left side of the boulder. That gives you a good sense of size comparison and they way some shorebirds are seen, especially along the southeast coast in winter. 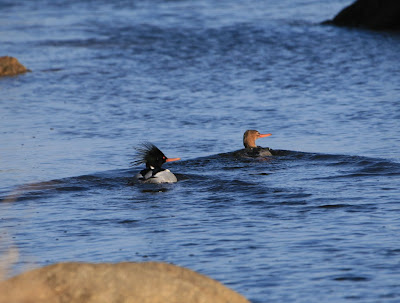 As we headed out of Acoaxet and back to Worcester, we found this spring-plumaged pair of Red-breasted Mergansers fishing in the little connecting stream from Cockeast Pond to Westport Harbor. This is often a place to find Great Blue Heron doing the same thing, but not today.

Leaving mostly bear ground behind, we headed back to Worcester knowing that since February is a short month, spring really is right around the corner.

Regards.....Sheila
Posted by Sheila Carroll at 4:13 AM