On our way home from Fairhaven, we decided to stop and check on the Tufted Duck at Turner's Reservoir. Technically it's the James V. Turner Reservoir (aka as the East Providence Reservoir, it includes South, Central and North ponds.) When we got to the main part of the reservoir (the causeway on Rt. 152) we were disappointed to find that much of the pond on either side of the road was frozen -- no sign of the Tufted. However, we were delighted to find a number of other waterfowl, including Canvasback, Ring-necked and Ruddy Duck. 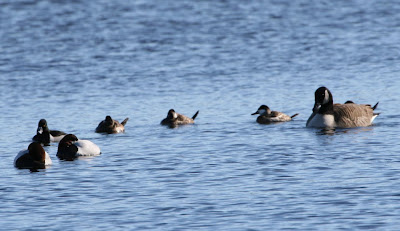 This photo shows the size difference with Canada Goose being the big man on campus. 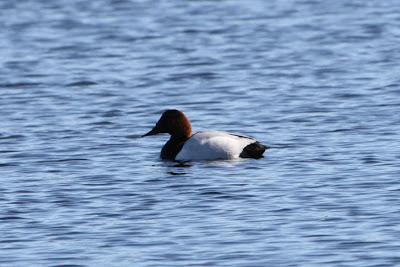 But the Canvasback were the real special birds for me. Sometimes you can see large rafts on the Cape in winter, but Sunday there were only four and each one really stood out. 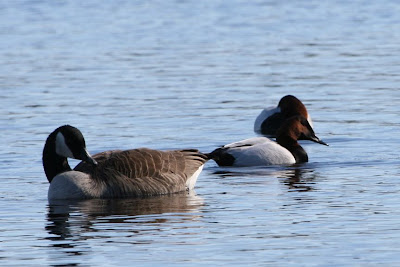 I've always considered it a somewhat large duck...that is until you see it next to a Canada Goose. 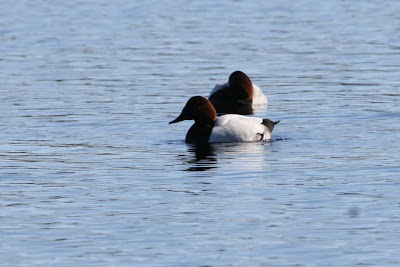 Even sleeping you can pick out that chestnut color on it's head. I remember when I first started birding I really had to double-check to make sure it wasn't a Redhead. Now I can't imagine confusing the two. That long, black bill and sloping forehead are really distinct -- not to mention how white the body of the male Canvasback looks. 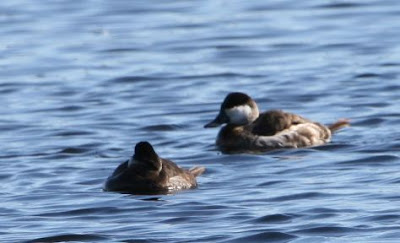 There were also close looks at Ruddy Duck, although I didn't see any signs of the males starting to go into breeding plumage.

We decided to check the upperparts of the reservoir (actually called Central Pond Reservoir on some maps), since this is where the Tufted Duck had been earlier in the winter. One of the best ways to view the major part of the pond is to park in the tractor trailer pulloff right where Narragansett Park Drive (off Rt. 1A) takes a 90 degree turn -- just past the little pond near the Hasbro complex. You cross the train tracks and follow a well-worn path through the woods. There's a wonderful bike path right along the pond and we had to walk down a bit before we found the Tufted in with a group of Ring-necks. 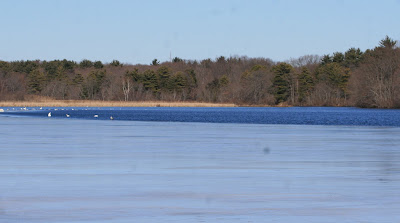 Now I'm not sure whether this is the same duck that was at Apponaug Cove, but it's interesting that this bird reappeared here either the same day or the day after the one in Warwick disappeared. 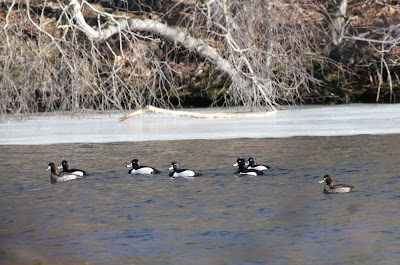 The tuft didn't seem quite as long or feathery as the one in Warwick, but that may have been just the lighting or the distance from which I was viewing the birds. 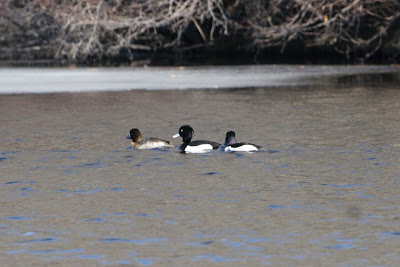 One of the things that was a little disconcerting was to see a Mute Swam challenging the flock and displaying a very defensive posture in an attempt to force the ducks out of "his" pond. I've seen Mute Swan chase Canada Geese off when they're on the nest, but trying to intimidate the ducks that were so much smaller just seemed like bullying! 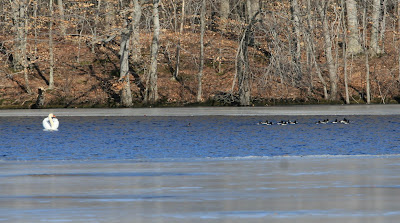 All in all, very satisfying looks at waterfowl and I was very glad we made the side trip on the way home.