Fall in the Tyringham Valley

Friday night Mark & I drove out to the southern Berks so that we could get up and see if dawn migration was happening in Tyringham. Last year about this time we had some great sparrow migration and even though we were a week or so earlier than last year, we were excited about what we might find. 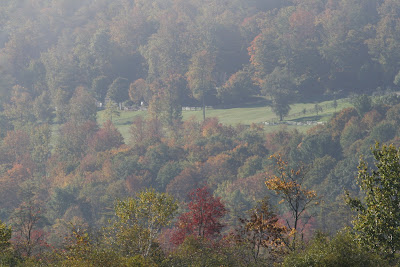 Since there had been frost warnings we awoke to find the area filled with morning mist, which only got thicker as the sun came up on the mountains and warmed the frosty valley floor. 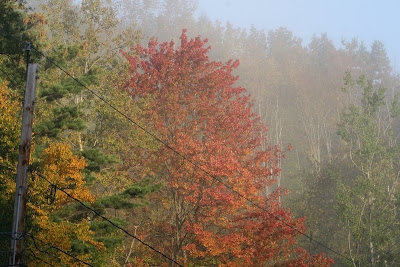 We started on Fernside Rd. (which is really in Lee) at the nw end of the WMA that covers most of the Tyringham Valley. We spent the entire morning in this well-defined area -- Meadow St. on the north, Fernside/Jerusalem Rd. on the west/Tyringham Rd./Main Rd. on the east and Jerusalem Rd. on the south. Our detours included time spent on Breakneck Rd. (cutting across the valley) and a trip up George Cannon Rd. to Goose Pond. 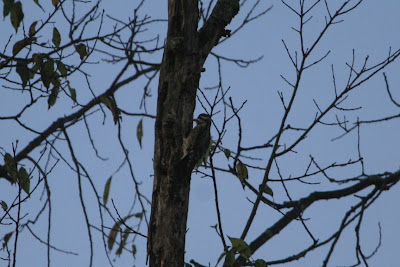 Even in the morning mist we were able to see that there were lots of birds moving through, including good numbers of Yellow-bellied Sapsucker, along with flocks of Chickadees. 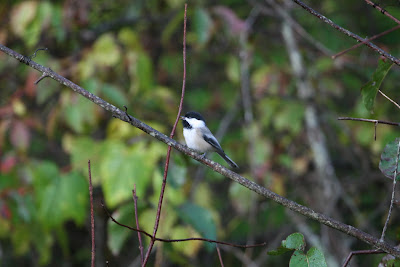 We knew there were other things mixed in the with Chickadees, and were delighted to find good numbers of Ruby-crowned Kinglets flitting through the treetops.... 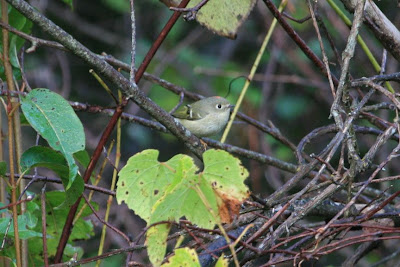 along with numbers of Blue-headed Vireos. At one point we had 4-6 vireos in the same tree just chasing each other around. 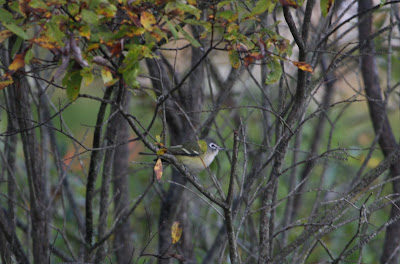 The tree tops were literally alive with birds. 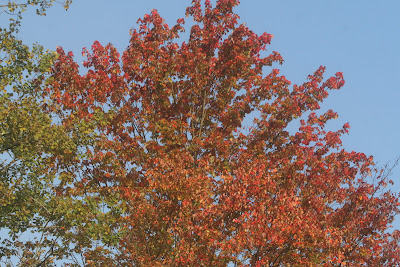 And, of course, one of the most common species was Yellow-rumped Warbler. 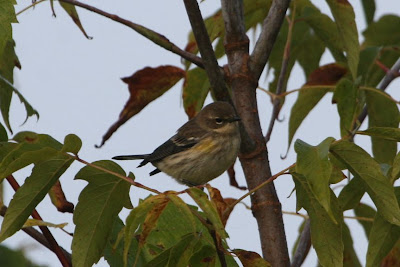 We had hundreds (300+ by Mark's count) of these birds in every plumage possible. Some were passing in the tops of the tress; and some were skulking down low. 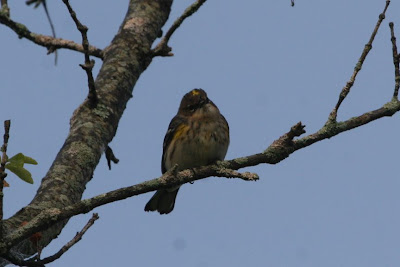 The one thing I do love about yellow-rumps is that they respond really well to spishing. So you can always get a good photo opportunity. (Unlike the Connecticut or Bay-breasted both of which popped in and out in a nano-second.) 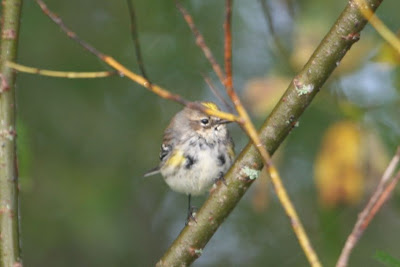 There were also the usual suspects -- like variously-plumaged Common Yellowthroats. 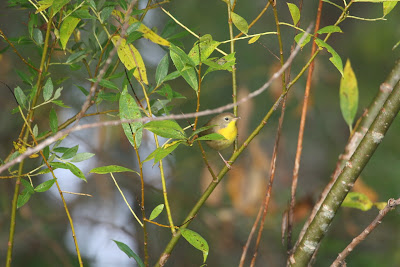 Eastern Phoebes, too, were well-represented. And try as we might, we could NOT make even one of them into anything more exotic! Although 43 phoebes moving across this valley certainly make for a sight. 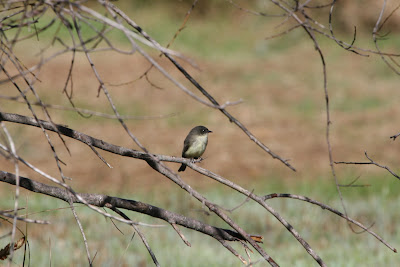 As the mists started to lift we moved east along Meadow Rd. hoping to find some unusual sparrows in the fields there. 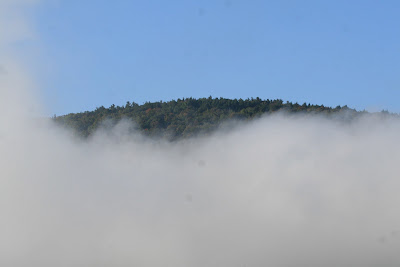 This is a great area for woodcock and snipe in breeding season, but the only shorebird we had for the day was Killdeer. 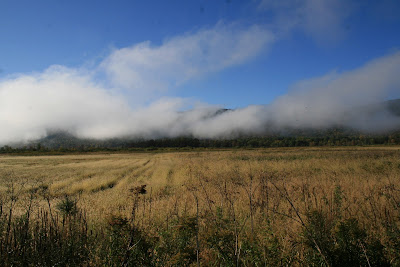 We had good numbers of Songs and Savis, along with a smattering of Bobolink. We even had 9 or 10 pipits working the fields.

The highlight for me was being able to photograph this Lincoln's Sparrow along the roadside before a car chased him off into the fields. 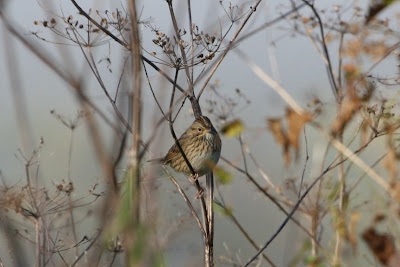 Being able to study all the fieldmarks was a real treat -- even in the mist, the buffy wash to the upper breast showed up very nicely. This bird always seems perky to me....maybe it's the crisp streaking or something. 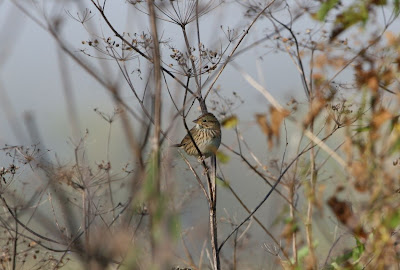 Runner-up for "most common warbler of the day" was Palm Warbler. It seemed like they were everywhere (conservatively, we had about 60 different birds). 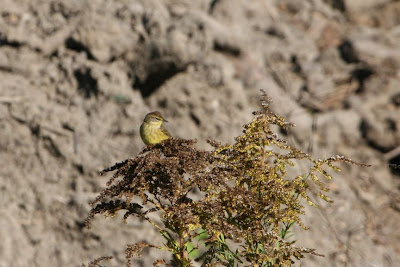 We had good representation of both the Eastern (yellow) and Western (gray/brown) forms of this bird. 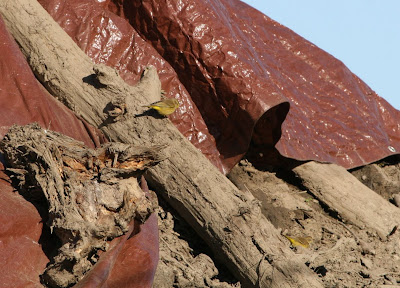 We found them along the road in the goldenrod and picking around large tarp-covered piles of brush and mulch. Much like the yellow-rumps, they seemed to be everywhere. 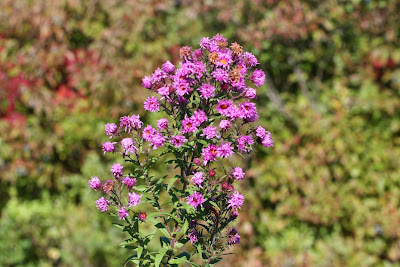 The fall asters perked up after the frosty morning and we even had several Cabbage Whites and Clouded Sulphurs once the temps started to climb. 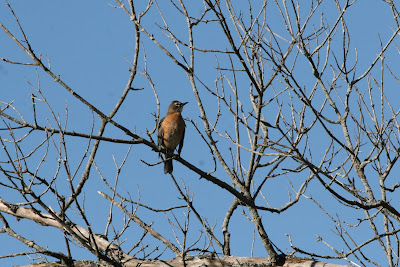 Robins and Flickers were also moving in big numbers yesterday. I can only imagine they were trying to get someplace where they wouldn't have to put with today's damp, soggy, cold weather! 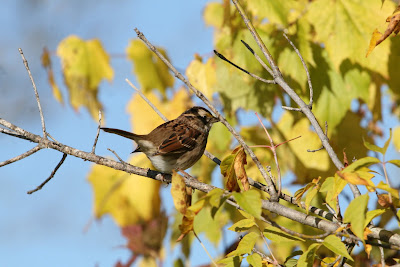 And this year's batch of White-throated Sparrows were all trying out their vocal chords it seemed. We had such weird variations on that "old Sam Peabody" call. 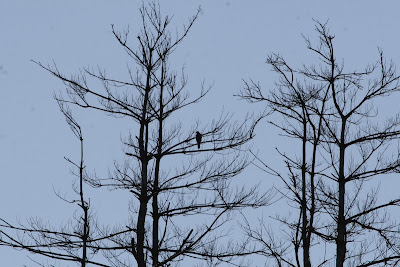 While we did have some minor hawk movement (although not a Broadwing to be seen) the only photo I managed to get was of this sharpie quite a ways out at the edge of a pond on Heartbreak Rd. 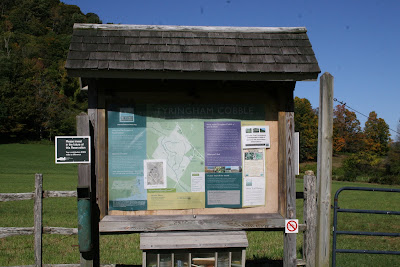 By 10 o'clock or so we were at Tyringham Cobble and spent about 20 minutes scanning for migrating raptors. Unfortunately we only had Turkey Vultures going up at this spot. Later on we did have an Osprey and more Sharpies and Red-tails. 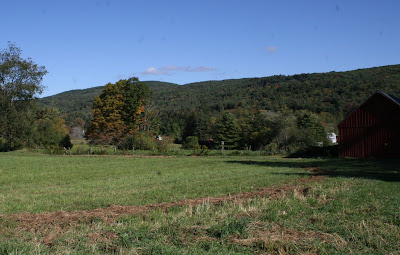 We did have another crop of Palm Warblers from the Trustee's parking lot on Jerusalem Rd., along with two pugnacious Eastern Phoebes who were constantly bombing the Palm Warbler as he foraged on the ground for insects. 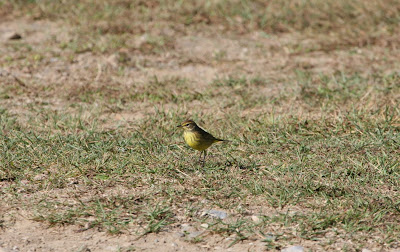 We weren't sure at first if they were bombing the Palm; however as the bird moved across the parking lot and perched on some fence railings, the phoebes continued to follow him. 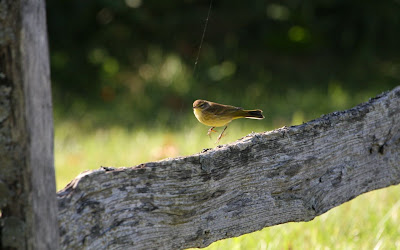 And while Mark wanted to believe that this bird was actually levitating, I was just lucky enough to catch him "mid-jump" after the phoebe spooked him. 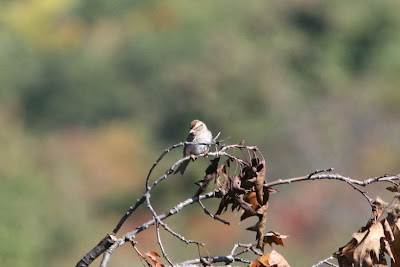 At one of the access points to the Appalachian Trail, we came across another crowd of Palms, E. Phoebes and Chipping Sparrows. Everyone was busy catching the insects as the sun really went to work warming up the fields.

After saying goodbye to this special place, we took a little detour up through the forests on a dirt road (George Cannon Rd.) to Goose Pond. 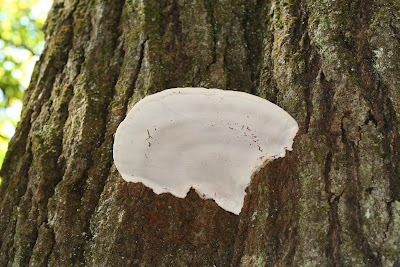 The woods were very quiet -- seems like most of the birds had been down in the valley. We did come across some very cool looking bracket fungus. I've tried to identify this, but it's impossible (at least for me.)
Right before getting up to Goose Pond there's a little marsh/pond on the left of the dirt road. This is where we had our first thrushes of the day (other than Robin and Bluebird). We had a small number of Hermit Thrush and this one Swainson's Thrush working through low in the brush surrounding the water. There may have been more, but it was heavy brush and this was the only bird I could photograph. 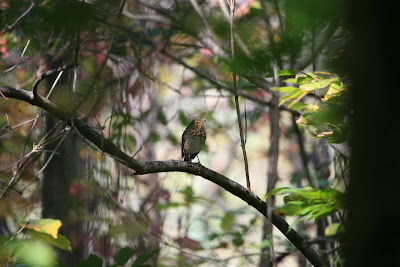 We came down Forest St. to Rt. 20 from Goose Pond and thought we'd stop and get a quick bite at Subway in Lee before jumping on the Pike and heading home. Little did we know that this was Founder's Day Weekend in Lee and we couldn't get to anything due a parade coming right down Rt. 20 from downtown Lee. We cut through a gas station, made a quick stop at McDonald's (yuk!) and turned around and high-tailed it back to the Pike entrance and got out of their quick!!!
That was a close call. I would hate to think about throngs of people wiping out the idyllic morning we had just experience in the always-magical Tryingham Valley. We had spent about 6 hours in this special place and had a great list of 61 species (including 12 species of warbler) to show for our morning's "work".

Posted by Sheila Carroll at 8:02 AM