I have to admit that I was a little skeptical about going anywhere in proximity to beaches on Labor Day weekend, but we figured that if we got an early start we could hit Gooseberry Neck and be heading back up Rt. 88 before most of the beach-going traffic took over -- we were right! And I'm so glad we didn't wimp out! Gooseberry Neck had a fair amount of migration activity and the tide was high enough that it pushed shorebirds right up to the rack line in several places. 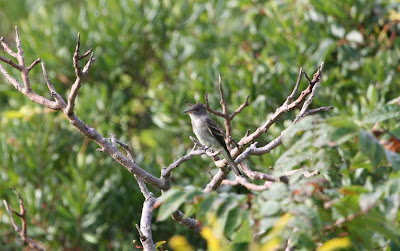 Shortly after beginning the walk out to the towers, we noticed several warblers and empid flycatchers zipping back and forth across the road. Most just dove into the thick vegetation, but this flycatcher (one of the Trails?) put up for a second or two. There were lots of Common Yellowthroats, an immature Prairie and Mark had an immature male Hooded Warbler -- all disappearing before you could get a great look.....and certainly before I could get any photos. 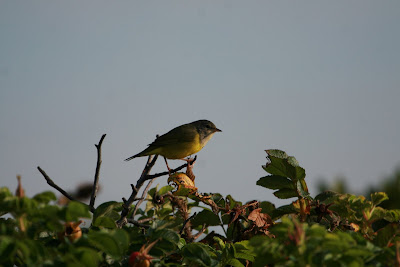 Right after Mark saw the Hooded I took a quick detour on the first path to the ocean on my right and when I returned to the main road I heard a different "chip" and spished up this immature/female Mourning Warbler. At first I thought I was going to get the Hooded, but when this bird perched up I thought it might be a Connecticut. Unfortunately, Mark was further down the road by this time and unable to help my confirm it in the field. 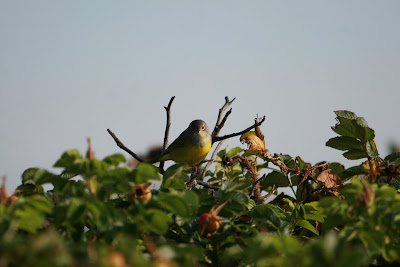 But luckily this bird decided to stay out for a few seconds and allowed me to catch some nice shots before she, too, dove into the thick bushes. When we got home we checked to make sure it wasn't a Connecticut (bill was too small and even though it had an eye ring, it was bright enough to convince us of CT) when we checked MacGillivray's we could see that it didn't have the distinctive arcs above and below the eye. 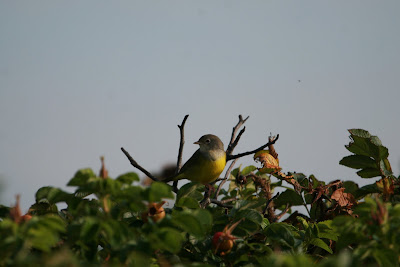 I haven't seen a lot of fall Mournings, so I wanted to be absolutely sure and sent the photo off to Scott Surner for confirmation. I can't tell you how excited I was to see this bird AND to get some good photos. 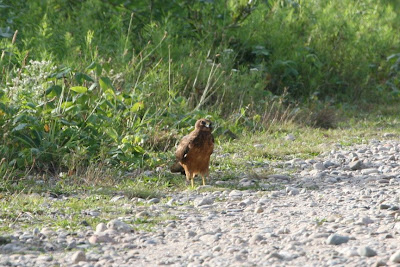 Further down the road I spotted something on the ground and as I approached it cautiously I realized it was an immature Harrier sitting on the road and preening. Since he/she was so busy it didn't notice me until I got fairly close. Sometimes young birds can be so oblivious I wonder how they ever make it to adulthood. 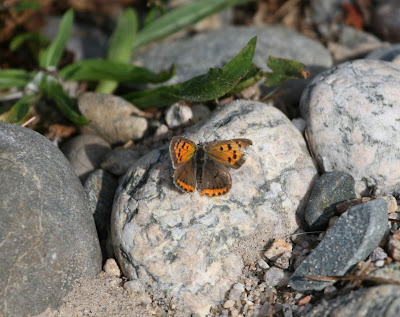 Gooseberry Neck seems to one of the places where I can always find an American Copper in the fall (yes I used the f-word) and Friday was no different. There seemed to be coppers every 10-20 feet along the road both on the way out and the way back. But besides the warblers and butterflies, we also came looking for shorebirds. 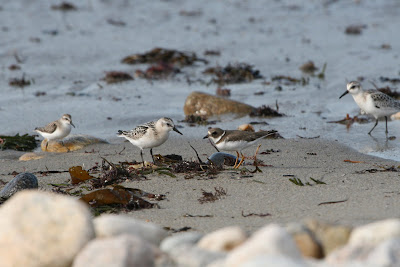 Gooseberry Neck never seems to have a huge variety (although Mike Boucher and Mike I-can't-remember-his last-name who we bumped into told me they had two Red Knot flying back along the shore from where we had jump come. Oh well, there was a nice assortment of the usual suspects -- lots of Sanderlings along with a smattering of Semipalmated Sandpipers and Semipal Plovers. 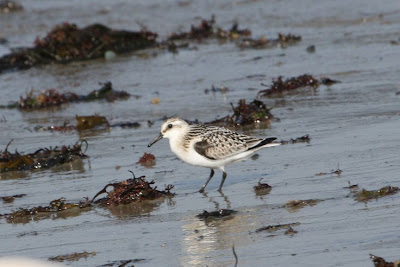 It was interesting to note those most of the Sanderlings where juvenile compared to the adults we had about 2 weeks ago. 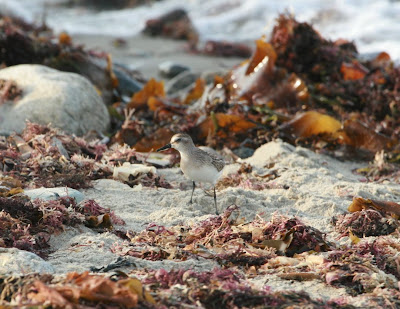 And the same goes for the Semipal Sandpipers and Plovers as well.

One of the shorebirds that seemed to be showing up in good numbers was the Ruddy Turnstone. 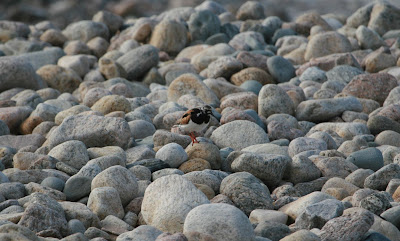 We had numbers of both immatures and adults feeding along the rack line and, of course, turning over stones looking for little morsels. 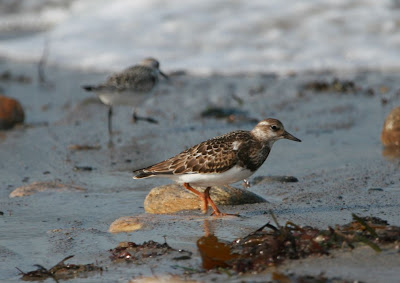 This is one shorebird I never get tired of -- it just has so many plumage variations and the coloration (especially on the adults) is just wild -- very harlequinesque. 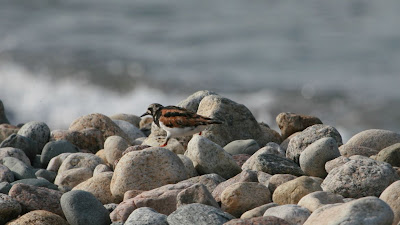 On the way back to the parking lot, Mark noticed lots of Fowler toads crossing the road. We were able to catch this little guy and photograph him so that Mark could add to his "photos of reptiles and amphibians I've held in my hand" list -- luckily we haven't come across any rattlesnakes. 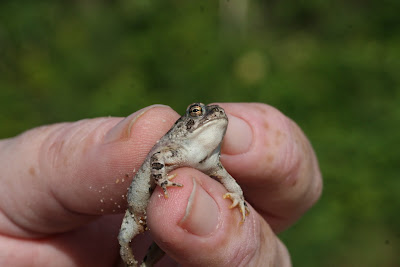 After leaving the Neck, we made a quick stop by the butterfly garden at Allen's Neck. We were delighted to find both male and female Broad-winged Skippers using the garden. 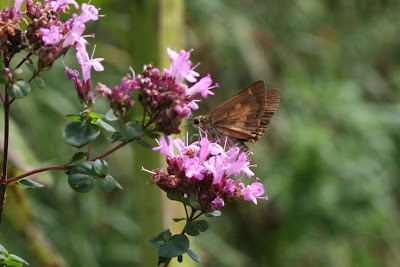 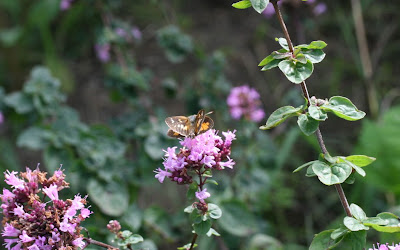 We decided that if we wanted to even make an attempt to hit Acoaxet we needed to move on after stopping to witness the high tide chaos at Allen's Pond. 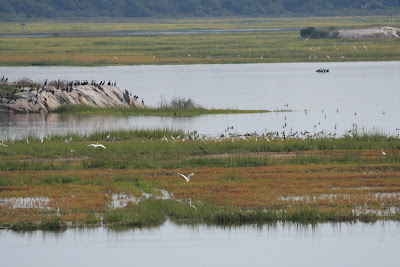 The numbers of cormorants and egrets using this area was mind-boggling. In addition to the Snowy and Great Egrets, we also had a few Little Blues and Glossy Ibis in and amongst the throngs of birds -- but not Tri-colored.

Again, we needed to push on and as we saw the traffic streaming down Rt. 88 I was starting to waiver on our decision to hit Acoaxet. I wasn't sure we would get any better looks and shorebirds (with the high tide) and the few beach overlooks were sure to be filled. But we decided to give it a shot. There wasn't much going on and the water was higher than ever at Richmond Pond so no shorebirds -- oh well. We decided to stop at the little conservation area along Old Harbor Rd. (the upper road) on the way out to take some shots of trees. Mark wanted to field test the upcoming Sibley field guide on trees so we thought it was worth a short stop and I could take some photos of leaves, bark, etc. and we could check it out when we got home.

Turns out for us it was a lucky stop. We had a medium-sized skipper in the parking lot that neither one of us recognized, so I took a few shots before moving on. When we got home and I uploaded my photos I realized that this was possibly a Zabulon Skipper (a life butterfly for us). 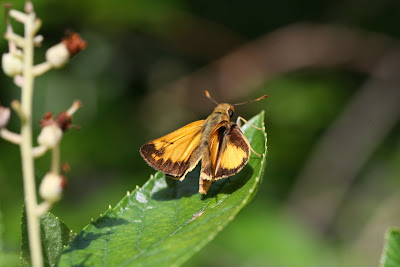 We sent the photo off to Erik Nielsen and Tom Gagnon for positive identification and the word came back that it was, indeed, a Zabulon. While the butterfly has been found in various parts of Rhode Island, this is only the second record in Massachusetts east of the Connecticut River Valley.

Needless to say it was a totally perfect morning on the southeastern coast....and we got back to Worcester early enough so that I could keep my promise (although a week late) to take a 5-year old, a 6-1/2 year old and a 9-1/2 year old back-to-school shopping -- now THAT's exhausting!

Posted by Sheila Carroll at 7:37 PM