So I'm breaking with tradition and devoting a whole blog to an encounter we had just yesterday out in the northern Berkshires. And as I'm writing this, I'm trying to figure out WHY? I never devoted a whole blog to Gremlin -- or my grandchildren for that matter. So why did I decide to spend so much time focused on this was one little fox. I'm not sure....... but it has something to do with wanting to share the absolute joy Mark and I had watching him or her. 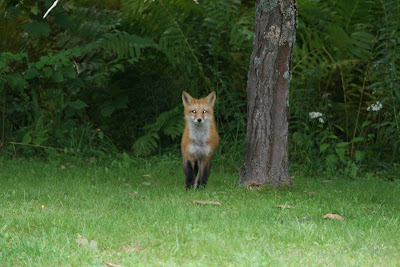 It was just before 8 a.m. and we were on Whitcomb Hill Rd., just off Rt. 2 in the town of Florida. We had just turned on to Monroe Rd./Raycroft Rd. heading towards the DCR property on top of Raycroft when a fox darted out in front of us from right to left with something in his mouth. 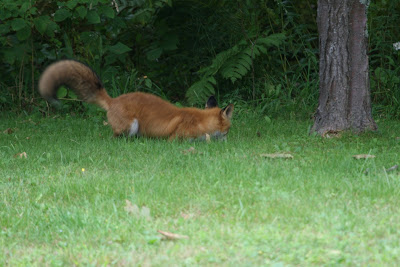 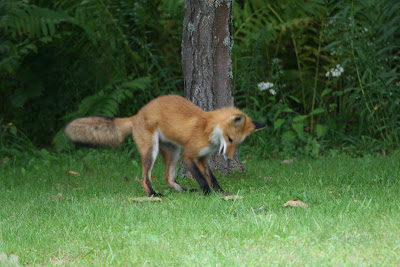 Never before have I seen a wild animal being quite so playful...and in full view of where we stopped the car. In fact at one point he left his food and trotted over to the car to check us out. He actually came so close to the back of the car that neither of us could see him in our side mirrors. Once he realized we weren't there to cause him any sort of problem, he went back to his immediate meal at hand. Since the animal never moved an inch while the fox came over to our car, I can only assume that the poor thing was already dead, so the playfulness displayed by the fox wasn't torture in any real sense of the word. 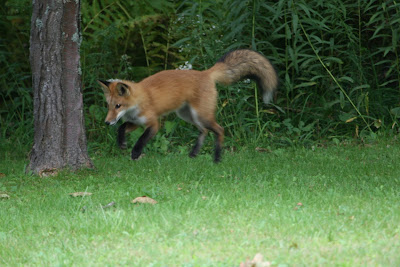 For the next 15 minutes we watched this fox leap and bound around to such a point that we couldn't really believe we were watching a wild animal. 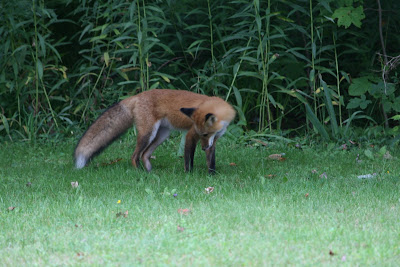 At times she looked more like one our cats in a very playful mood, so concluded that she was a young fox and for some reason hadn't yet learned to be wary of humans. 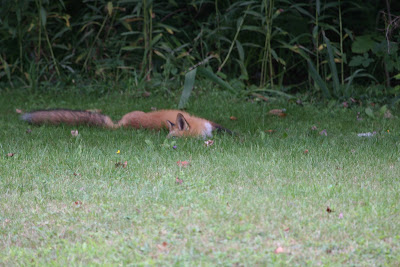 After a significant amount of racing around and tossing the animal into the air, he finally settled down and within a few bites of those sharp teeth disposed of his breakfast very efficiently. 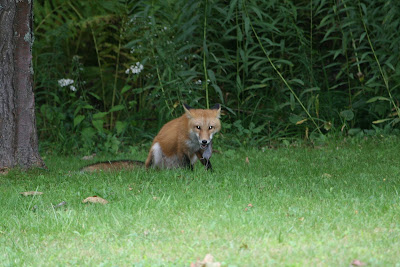 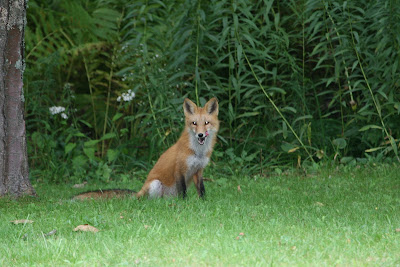 After licking his chops, he proceeded to turn his full attention to us. 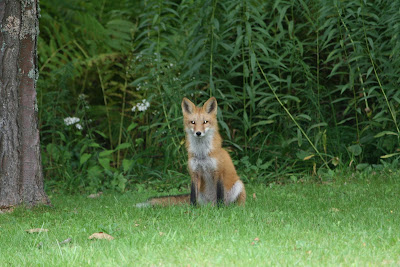 We suddenly became something much more interesting than an appreciative audience for his antics. 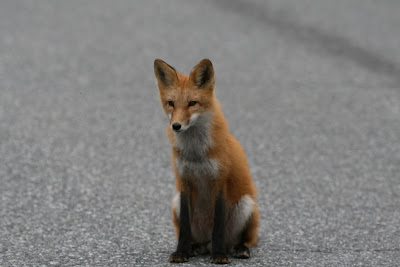 Showing no fear whatsoever, she proceeded to come across the road towards the car and sat down to see what we would do next. I was truly afraid that someone would come down the road and hit this adorable vixen I decided to clap my hands and try to shoo her off into the nearby woods. By this time Mark & I both were outside the car and less than a dozen feet from the fox.

While she noted our noisy attempts to move her off the road....we were less than successful and, at times, seemed to increase her curiosity about what the heck we were doing. Finally after several attempts she seemed to realize we weren't going to be much fun for her, so she turned around and promptly trotted back to check for any remains of her breakfast. 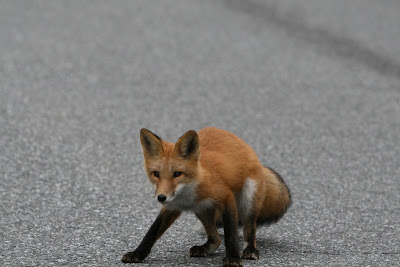 This was definitely a unique encounter and one that I couldn't imagine sharing with anyone other than Mark! And probably one that we won't have again anytime soon. 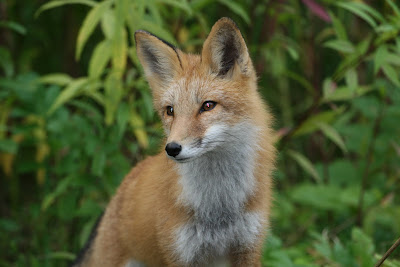 When we got home we spent some time researching fox behavior in Alfred Godin's Wild Mammals of New England. It seems their curiosity and playfulness is well documented. Even to the point of red foxes making friends and playing with dogs, mountain sheep and caribou!

Now if only the skunk living in our backyard would be as playful and friendly....oh well, can't have everything.

Posted by Sheila Carroll at 7:45 PM