Atlasing in the Southern Berkshires

Early June brought us full force into atlasing, especially in the southern Berkshires where we have several blocks in and around the New Marlborough/Sandisfield area. We also had our second block-busting atlas to do encompassing quite a bit of Beartown State Forest. 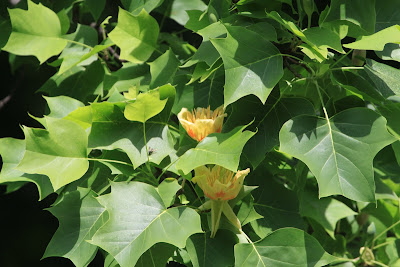 We made a couple of different trips to the area to get the night birds in our personal blocks, as well as doing some owling in the state forest. While we've been to the area several times over the years, this is the first time we were there when the Tulip Tree right near the old inn on the town common was in bloom....so this was a "life" tree for me. 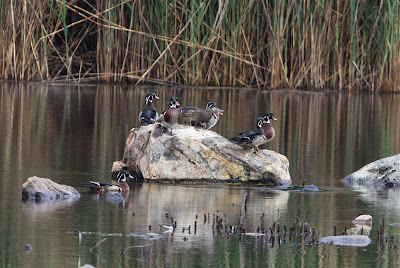 On East Hill Road we came across a farm next to a marsh where there were large numbers of waterfowl. There weren't a lot of species (basically Canada Geese, Mallards and Wood Ducks) but the numbers were quite impressive...we had more than 30 Wood Duck.

These blocks had a number of small ponds, so confirming breeding on Canada Goose didn't prove to be very difficult. 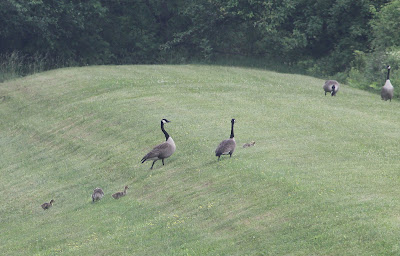 Although some of the larger lakes, like West Lake, seemed rather empty. There were some reeds and we found this larva dragonfly (actually there were quite a few) attached to the reeds. 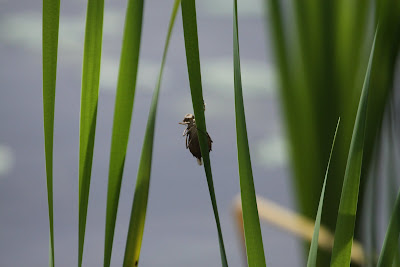 There were a number of Common Whitetails nearby, but I couldn't say for sure if the larva was of that species. 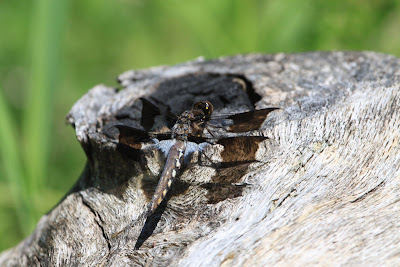 The immature Whitetails were everywhere, and the above photo shows both the translucency of the wings (where you can see the texture of the wood through the wings) and yet the wings cast a shadow so that it looks like there are a double pair of wings. 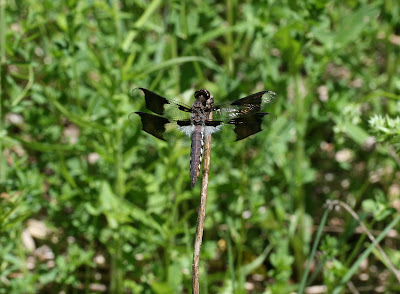 Many of the fields had Bobolink still displaying.... 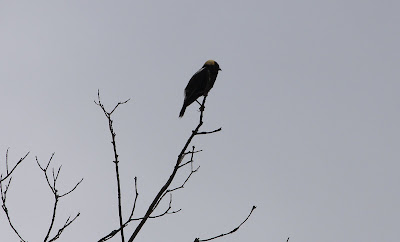 but we really had to search to find a Savannah Sparrow in some of the blocks. 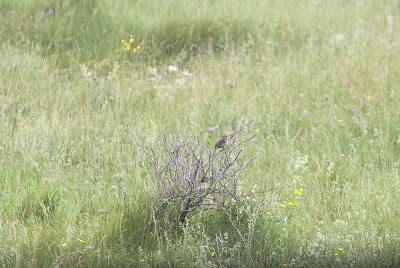 Baltimore Orioles were definitely out and about though. 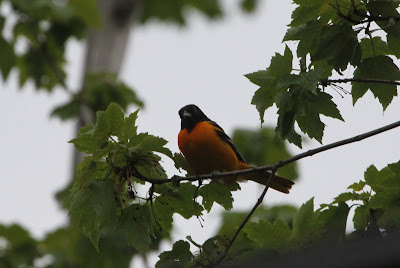 After spending a good day in the field logging hours and species in the 4 blocks Mark & I are atlasing, we knew it was time to head into Beartown SF for some evening birding. We decided to enter from the south where we would drive by the campground before getting into the block.

Along the road we came across a group of feisty goats -- one of Mark's favorite domestic animals. We pulled over and watched for about 10 minutes as they played "king of the hill" on the top of a metal enclosure. Finally the black & white one literally pushed all the others off and proceeded to run around in circles on the roof. I have to admit they are entertaining. 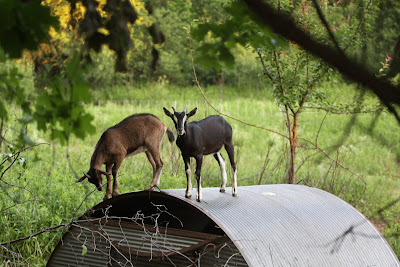 American Toads seemed to be on the roads all over so our drive through and out of the park on the north end was quite slow. 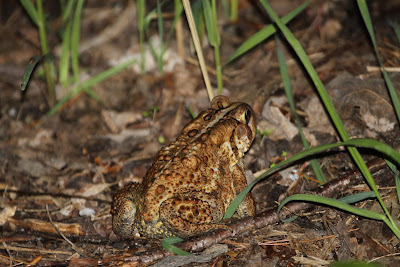 Thrushes were signing everywhere in the early evening and this Veery even stayed up long enough for me to get a silhouette shot. 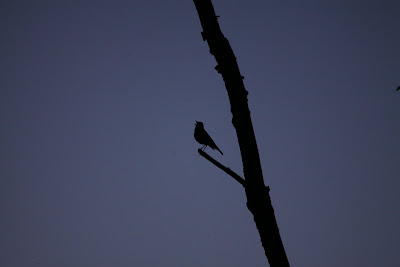 We had Barred and Saw-whet Owls in the park, where it's quite wooded, and Great Horned in the more open country of our other blocks. 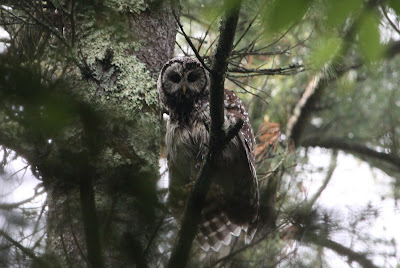 And while we heard Snipe in the park, we didn't find Woodcock except along the road near Campbell Falls down by the border with CT. While the photo is dark you can see his eye picking up the light from my camera and he was flashing the white of his cocked tail in defense of is territory. 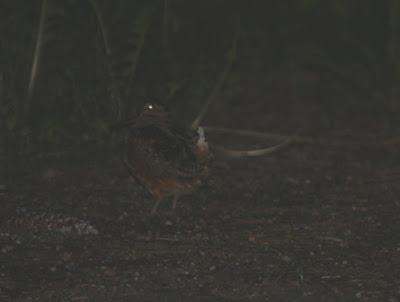 The next morning before meeting the team to do the actual block busting, we stopped in one of our favorite places in Stockbridge and were treated with great looks at a Virginia Rail. 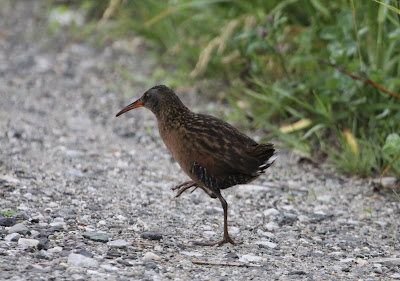 We could hear young peeping just off the road, but none came in view with the parent. 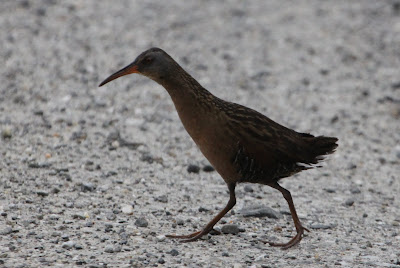 At times it seemed like the bird was trying to draw us down the road, so it's possible the other parent was with the chicks in the reeds. 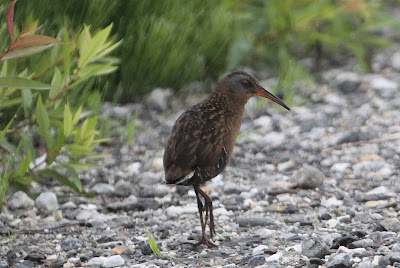 Beartown proved to be a great place to find Ruby-throated Hummingbirds perched on dead snags at almost every marsh overlook or sometimes stream crossing. 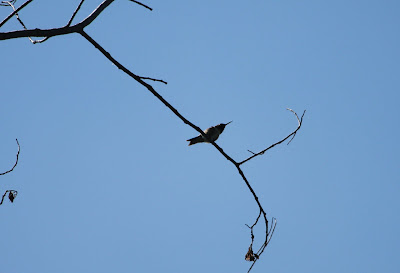 We had 4 teams doing the block (sorry, but I forgot to take a team picture) and ended up with 74 species, including this family of Turkeys which we had not seen on 3 previous visits. 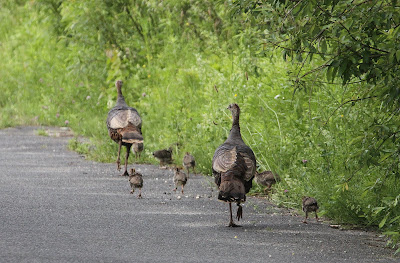 Talk about being in the right place at the right time! 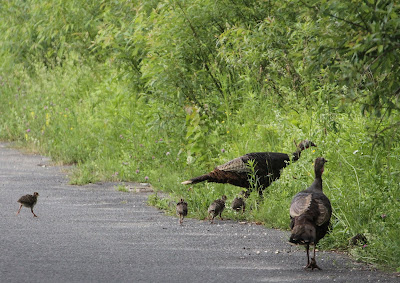 We did our usual tally over lunch and realized just how diverse this area can be. We had 15 species of warbler, 9 species of flycatchers (including two Acadians!) and confirmed Yellow-throated, Blue-headed and Red-eyed Vireo.
It was a fun morning and it felt really good to have another Berkshire County block finished. Next: the northern Berkshires.
Enjoy......Sheila
Posted by Sheila Carroll at 9:03 PM