On June 19th we took on some very aggressive block busting in the Berkshires -- two full blocks near the base of Mt. Greylock (Cheshire 4 & 5). We had a team of 10 very dedicated birders, some having previously atlased earlier this year as well as last year. 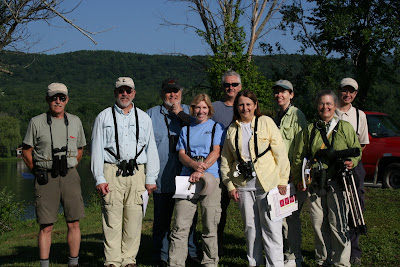 Our crew consisted of Alan Marble, Deb & Dan Berard, John & Eileen Stencil, Pat White, Jane Lufkin and Steve Sutton. Mark & I had logged some hours in both of these blocks last year and we went out on Friday to put in some more and to get the owling done as well. We saw an immature Bald Eagle on the Cheshire Reservoir, as well as the pair of Ring-necked Ducks we had seen earlier. 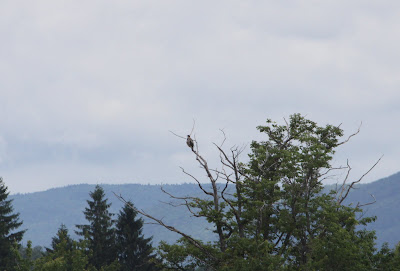 The Canada Geese were certainly confirmed....many times over. 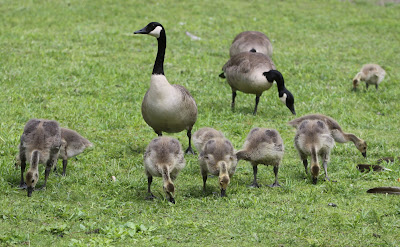 And even though they were dirt common on the reservoir, this little one looked particularly cute. 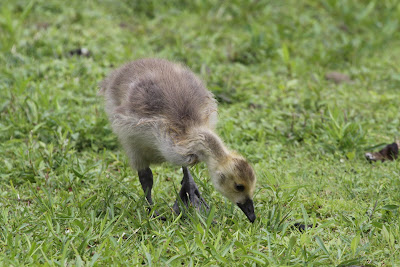 We had recently-fledged White-breasted Nuthatches, which were making the strangest calls as they were still begging food from their parents. 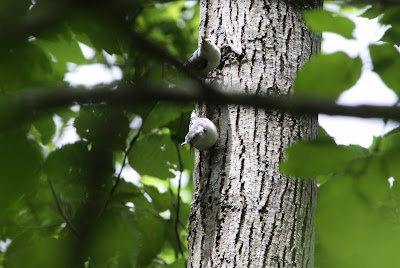 This female Common Yellowthroat was still in the nest-building stage.... 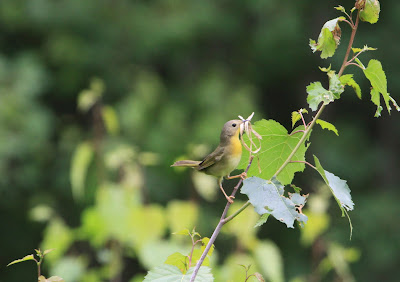 but this Red-winged Blackbird was defending territory in Cheshire 5. 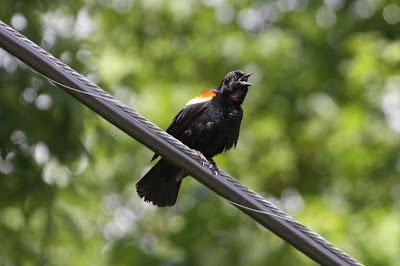 Mark does sometimes get wanderlust, so I have to keep an eye on him when he just starts walking.....especially when we get to places where there aren't lots of people. 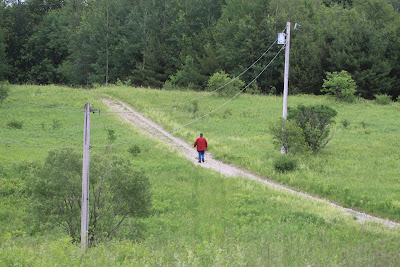 And while he claimed to be checking our breeding Indigo Bunting, I know he was secretly looking for a bear. Luckily he didn't bump into one, since I do wonder what would happen if he came across a sow with her cubs. 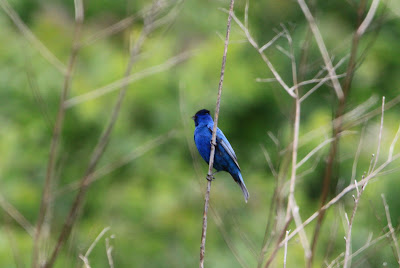 We had Ovenbirds singing from lots of spots, and the Berards got great footage of a nestling Ovenbird (you really couldn't call it fledged) scooting along a mountain road. 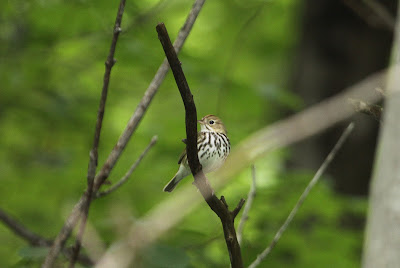 Red-eyed Vireos were out gathering food.... 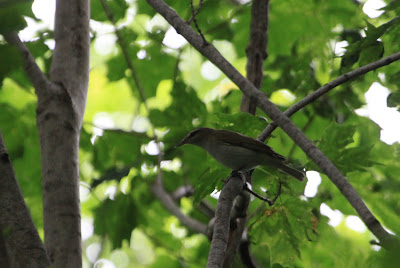 And I decided to stake out a nest to see who was going to come in. I thought I knew who's nest it was based on the chipping... 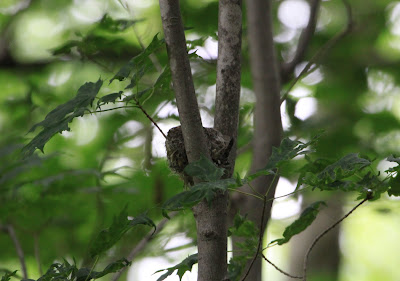 and a male American Redstart was flitting around with food in its mouth. 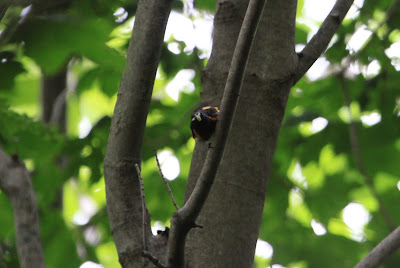 Once he realized that I wasn't a threat, he came right into the nest and fed the young. The female was a little more cautious, so I backed off so they could gather food without having me to worry about. 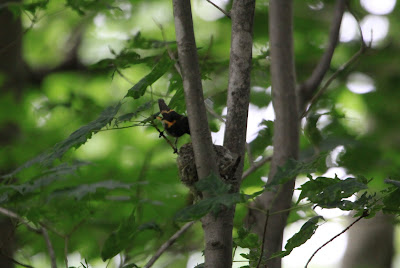 There were a pair of Rose-breasted Grosbeaks in the same general area, and a little patience brought the female into view foraging as well. 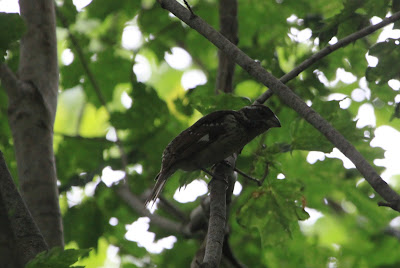 This time it was the male who kept his distance, so I moved off pretty quickly so they could go about their business undisturbed. 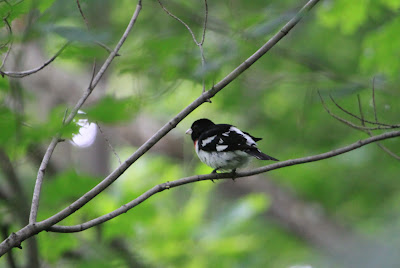 One of the exciting finds for Mark & me was a new colony of Cliff Swallows. We came across a barn with about 15-20 active nests. It sort of makes sense when you remember that the huge colony are Ayr Hill Farm is only about 5-6 miles north of this block. 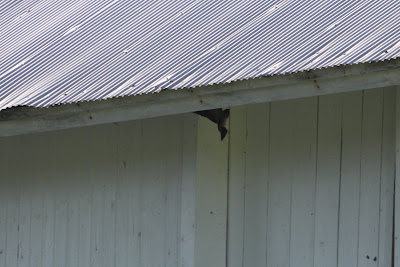 Ruby-throated Hummingbirds on territory was fairly common in both of the Cheshire blocks we did, although we never did find a nest. 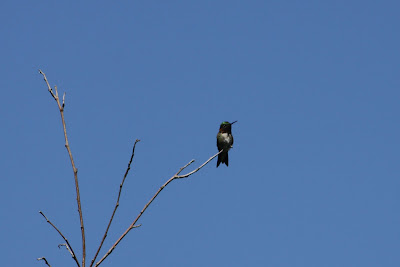 An Alder Flycatcher was still singing on territory at the same brook crossing where we had it the week previously. This is where the 'S' code for singing is important, since we try to make sure that if we go out to put some early hours in we do so at least 7 days before we'll be block busting, since it's hard to get all Confirmed behavior when you have multiple teams covering the area. 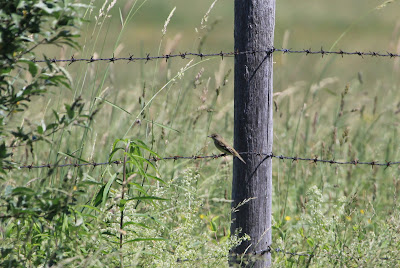 However, we had lots of confirmed behavior from Purple Finch. 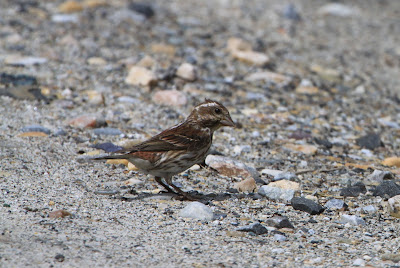 In fact, we've been running into fledged young in several of the Berkshire blocks in both the north and south part of the county. 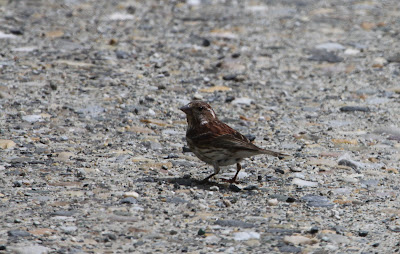 Since most of the Bobolinks were on territory, it was easy to see the males singing. We had a few juvenile birds and, of course, males and females carrying food back to the nest. No matter how many times I see the males, though, their patterning always takes my breath away. 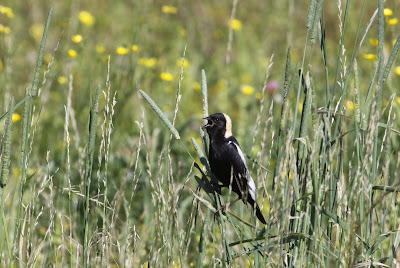 In the territory that Mark & I were covering on Saturday, our last new species was this fledged Bluebird. With all the open fields, we had not sighted any Bluebirds in our previous trips, so this was truly an 11th hour save.

Following our usual protocol, we did our tallying over a great lunch in The Cobble View Pub right on Rt. 8. It was there you could really appreciate the differences between these two adjacent blocks. Cheshire 4 (the northern block with great forested trails leading right up the slopes of Greylock) had 78 species. Cheshire 5 (with the rail trail, the reservoir and lots of marshes) had 95 species. You can always go to the Breeding Bird Atlas sight and check out the Block Results Detail for both blocks to get the details. 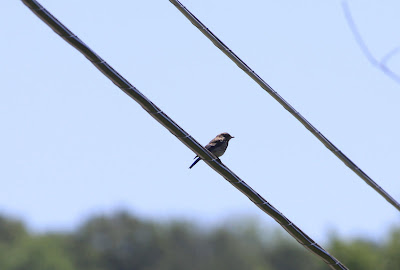 Before we broke up, we decided to take a side trip up to the northern part of Cheshire (near Adams) and visit the Ayr Hill colony of Cliff Swallows. If that's not something you've done, it is pretty spectacular. We arrived and almost immediately were joined by the farmer and his daughter (no pun intended) and we counted about 215 active nests. Jim's daughter claims they've have Cliff Swallows all these years because they don't use pesticides. Could be. 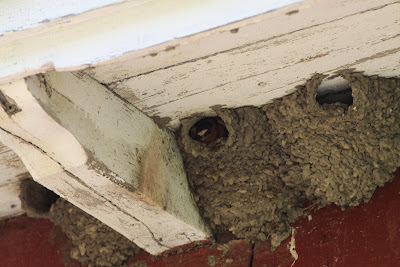 After a nice visit and a lot of photographs, a small but mighty group of tired, but happy, eastern birders headed back towards Worcester and beyond.