The Breeding Bird Atlas seems to take over my life at this time of year. As regional coordinators for Worcester County, Mark and I have spent a good part of the last 4 years coordinating the efforts of dozens of birders in our part of the state to ensure that Worcester County is accurately reflected in this 2nd atlas. This is particularly important since the first atlas (done back in the mid-70's) had pretty spotty coverage -- especially once you looked beyond 495. 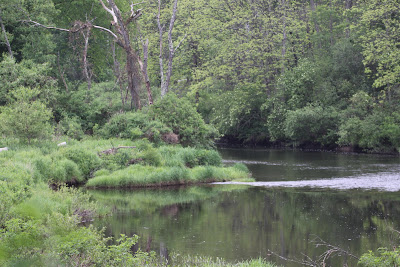 Having lived in Worcester and birded for more than 3 decades, I've seen first-hand how coastally biased the state is....even today. A good example is that when this atlas came out initially they wanted documentation of any Tree Swallows that were nesting in natural cavities vs. boxes. To the birders in 2/3 of the state this was totally laughable and showed a real lack of breeding birds in the central and western parts of the state. I could go on forever with silly examples, but instead have thrown myself into this atlas and believe the data will be something that finally gets notices. 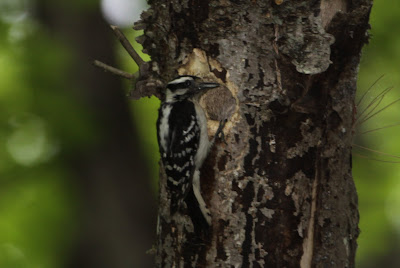 With almost all of the Worcester County blocks fully covered, we are now in the phase where things like "block busting" and "block wrangling" come into play. Wrangling is a phrase we coined here in Worcester (since we've viewed as the wild west) for going into blocks that have the requisite 20+ hours by a primary observer and basically do clean-up. Sometimes species just need to be upgraded with definitive breeding behavior noted. So there are several of us that go out like a SWAT team and try to either add or upgrade species to ensure that the criteria of 70 species minimum with 70% noted as a probable or confirmed breeder is met. Watching a Downy Woodpecker feeding young at the nest not only confirms the bird as a breeder, but it a ton of fun! 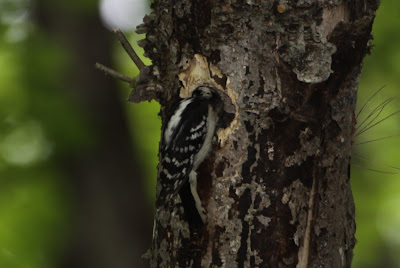 In the photo above you can see one of the little heads popping up to get the delicious food being served by mama bird. 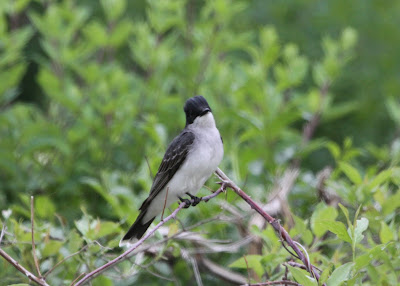 Staying with an Eastern Kingbird to see it either carrying food or returning to an actual nest can take some time and patience. But often a nice way to spend a Sunday morning when the weather's promising showers or thunderstorms later in the morning.

Of course, coming across a species in a place where you don't expect to find one -- like this Least Flycatcher in some farm land in the Brookfields is always good, since you can actually up the species count for that block. 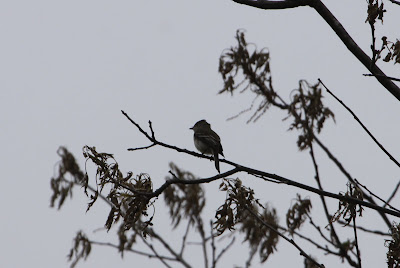 This Red-eyed Vireo was "guarding" his mate and she foraged around after nesting material. 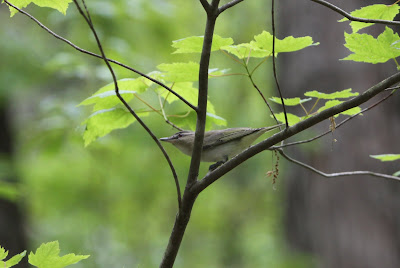 And the same thing was going on with this female Rose-breasted Grosbeak. 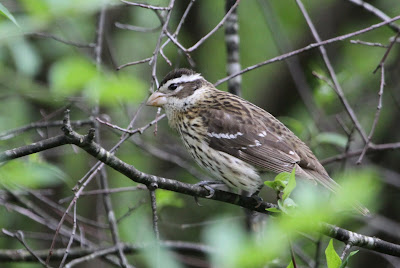 In fact, we were able to watch this couple for about 10 minutes as she stripped bark from a sapling and he sat nearby doing only the "squeak" call occasionally. 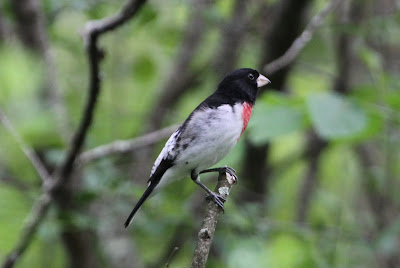 This Black-capped Chickadee actually flew in and out of the nest several times with food as we watched from a discrete distance. 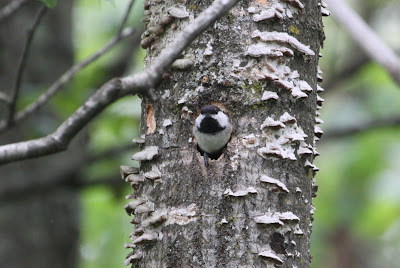 And sometimes watching one bird search a thicket for "food" means that another bird's nest is being robbed. We watched this Bluejay systematically forage through several bushes until he finally came across a Yellow Warbler's nest. Even though I tried to chase the Bluejay away, it's so baked into his DNA, that he probably returned 5 minutes after we left the area. 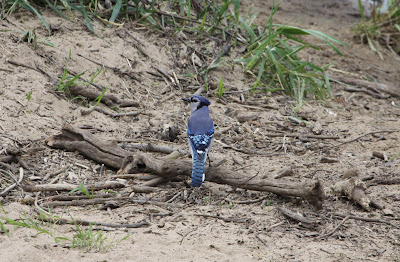 Some species can be a little more difficult to note breeding behavior -- especially when they're still hanging around in flocks like these Cedar Waxwings in Sturbridge. 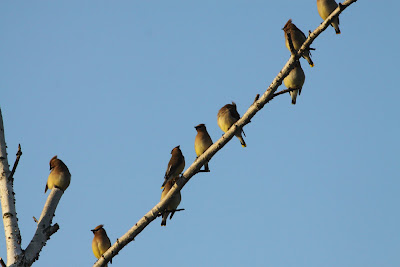 We also spent a lot of time with these Rough-winged Swallows trying to determine why they looked so dark -- almost sooty. 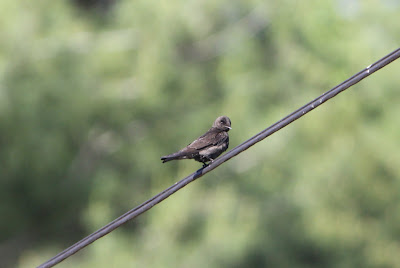 It seemed a little early for recently-fledged birds, so we really wanted to watch them for a while and see if they were nesting nearby or catching food....but the birds were just not that cooperative. 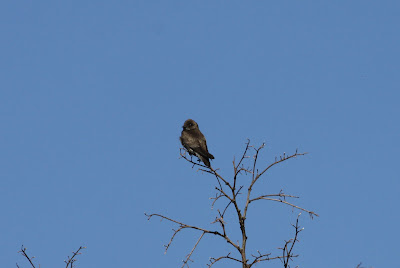 Of course, there's always other things that do stay put and allow you to enjoy for more than a nano-second.....like this Eyed Brown butterfly. 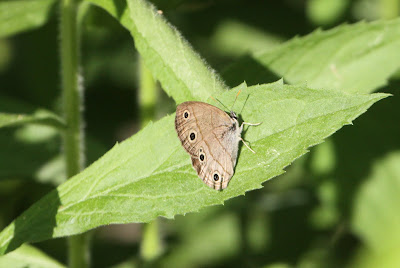 There are two pairs of Osprey nesting in Sturbridge for the past few years, and we knew that one of them had breeding Killdeer nearby (which was still needed for the block) so we decided to go and check it out. The nest, which had been active a month earlier, had birds flying around, but we never got good looks at the young in the nest. 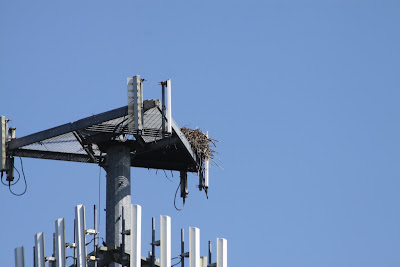 We did, however, have a Wood Duck duckling nearby, confirming the breeding status of that species.... 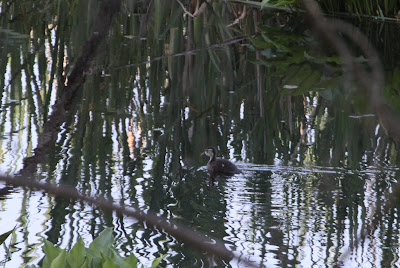 and we reconfirmed a medium-sized rookery of Great Blue Herons. It's sorta hard to miss them when they get to this age, since they are so vocal when a parent bird approaches the nest with food. 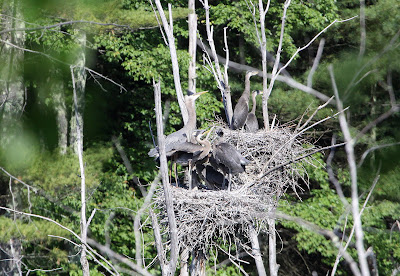 We watching these birds devouring what the parent delivered and then when he/she flew off to get more, they just watching guard silently. 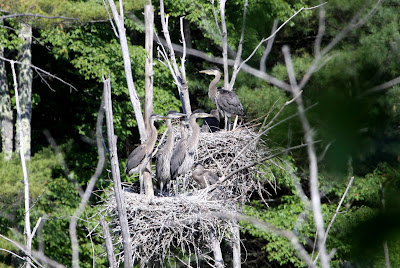 I have to admit that I've enjoyed doing the atlas work immensely....whether we're "wrangling" blocks in Worcester County or helping some of the other counties with block busting like we did in Plymouth County recently and will be doing in alot of in the Berkshires coming....so stay tuned!
Enjoy.....Sheila
Posted by Sheila Carroll at 8:34 PM