With so much time being spent in the Berkshires, we headed off to Westport a few weeks ago to see if shorebirds were starting to migrate. As we drove down Rt. 88 to Gooseberry Neck, we spotted this young Cooper's Hawk sitting on the phone pole. He allowed us to get quite close and we, in fact, left him calling (for his parents?) as we continued on our way. 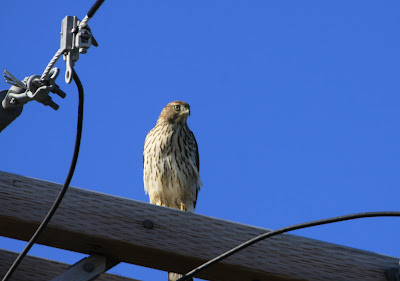 As we crossed the causeway, we caught these Double-crested Cormorants sunning themselves. With all the rocks along the coast in this spot, it was funny to watch them both try to fit on one smaller-sized rock. 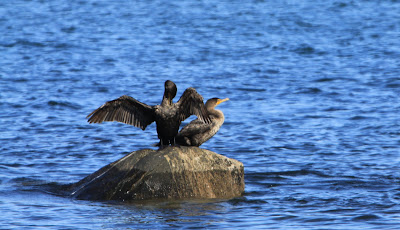 The Ospreys were all over.... 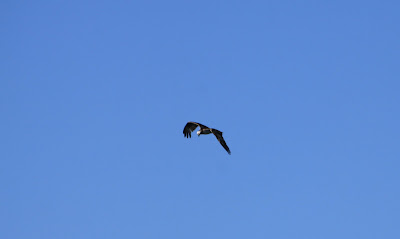 and so were the American Coppers as we walked out the road to get to the first good overlook for shorebirds. 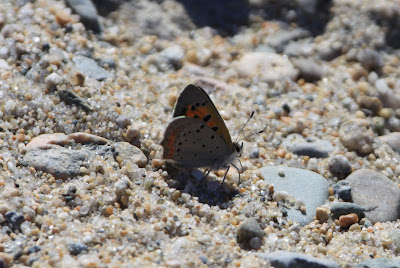 The numbers of Tree Swallows were definitely building up. 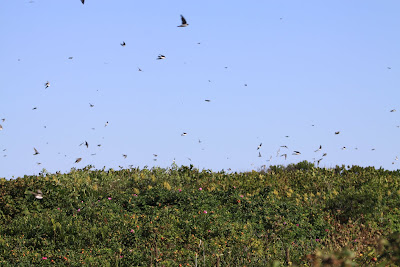 In fact we estimated tens of thousands....but we saw very few species other than Trees! 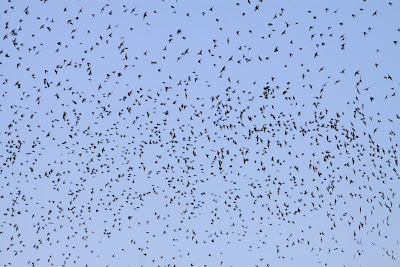 This is such a good time to watch a Peregrine come -- both to look for shorebirds to harass..... 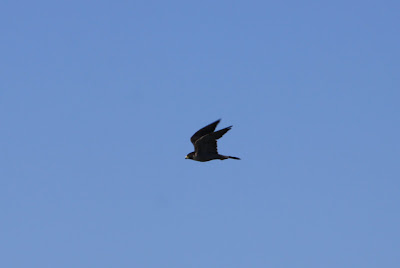 and to get the swallows up and swarming. In the picture below the Peregrine wasn't after swallows, but decided to make a run at a gull. 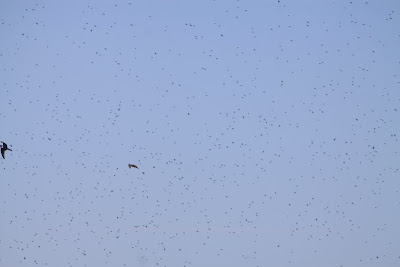 Considering the size difference, this was one mighty little Peregrine. 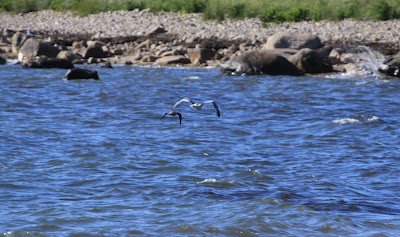 We started to see shorebirds by the first walk down to the rocky shore on the western side of the road.

The Ruddy Turnstones (of which there were quite a few) were in all different plumages. No matter how often I see this shorebird, I find it totally fascinating. Maybe it's the bright orange legs, or the confusing pattern as these birds start to change into their winter coats. I do enjoy seeing them poking around on the rocks like this one was doing. 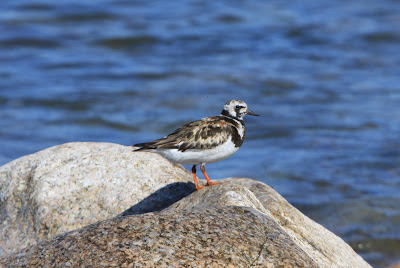 There were also good numbers of Semipalmated Plovers starting to build up. When I see them running along the shore or outlined against a sandy beach, I never appreciate them as much as I do when they're sitting in and among the rack line or the rocky shore. 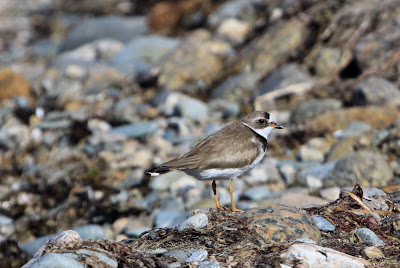 And the peep of the day was certainly the Semi-palmated Sandpiper. 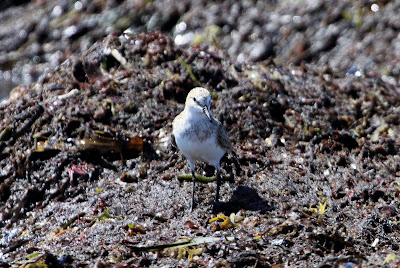 These 3 photos are of the same bird, and I wanted to include all of them so you could appreciate how lighting can make a bird look totally different. 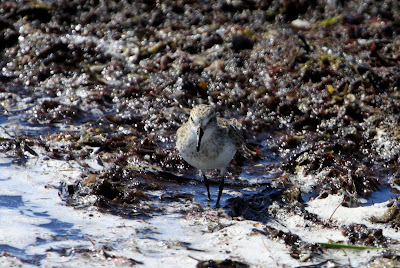 In the photo above you can also get a really good look at the bulbous tip to its bill......and the side view lets you see just how short and blunt the bill really is. Not at all like a Least's. 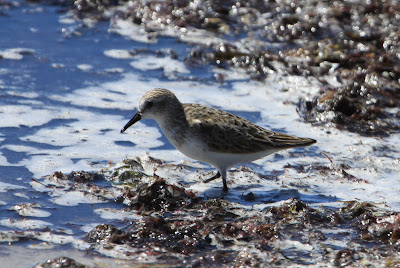 After spending a few hours on Gooseberry Neck we checked out the shoreline before heading off to Acoaxet. 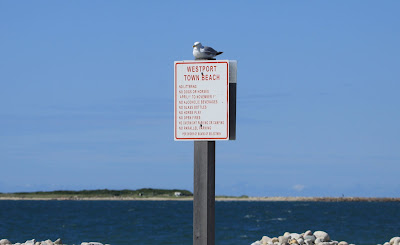 In the pool across from the Town Beach we had a good-sized group of Snowy Egrets....most were immature birds and they flew back into the marsh as we pulled into the rocky parking lot. These 3 birds, however, stayed for a few minutes before flying off to join their friends (or siblings). 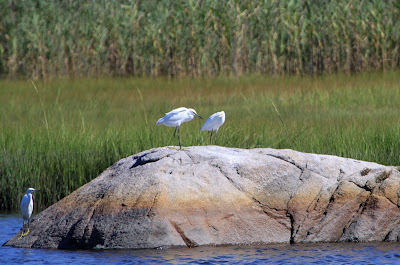 At Acoaxet, the shorebirds were much further down the beach than we were prepared to walk, so I had to settle for this Spotted Sandpiper that landed right in front of me as a sitting quietly waiting to get some shots of terns. 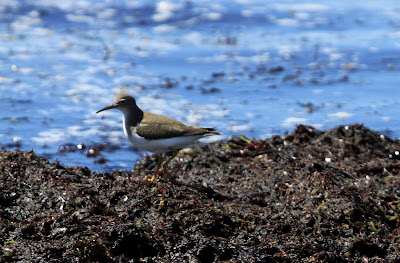 There were both adult and immature Common Terns feeding in front of me, and after a bit they perched on the nearby rocks some still begging to be fed. 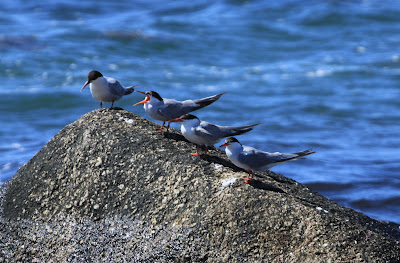 You can see the immature bird (with the white forehead) calling as the adult flies over. 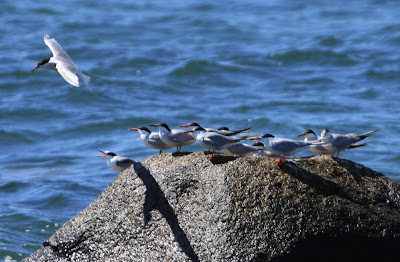 After about 15 minutes some folks came down the beach with their dog and that was the end of the tern show. But as they flew off I got a good look at their wing patterns. 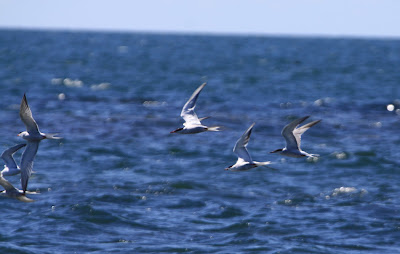 Visiting the ocean in summer is always such a mixed blessing....the people can be all over, but if you want to see things like breeding Common Terns you don't have a choice.

My vote is always for the Westport/Acoaxet area because you don't have the crowds that you have on the Cape or Plum Island and it's relatively close to home. Depending on the tides and the weather conditions, you can get great shorebird and passerine migration when you hit all the hot spots. If you haven't gone there too much, it's definitely worth a try.....just don't tell too many people!