These past few weeks have been almost magical when it comes to shorebird migration. Not that may not seem so surprising when you consider Plum Island and other hot spots.....but Sterling Peat? Worcester County birders have know for years that this is a great place to check for the occasional Great Egret and some of the more typical species like Yellowlegs, Least, Semi's. 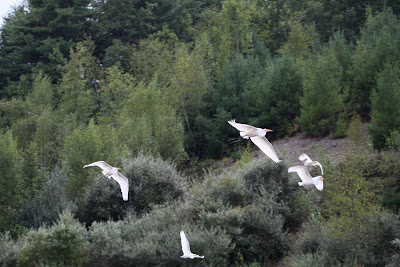 On the two occasions we've visited recently we've been treated to great views of 8 Great Egrets. As the dry weather has continued the pools have shrunk and it's a virtual smorgasbord for the herons and egrets. 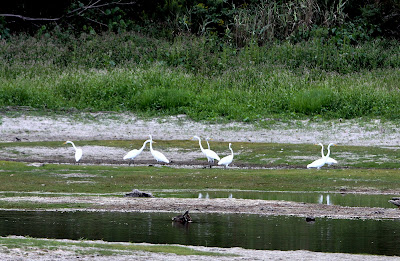 These two bold birds really wanted to feed in the pool where I was photographing shorebirds so they kept inching closer and closer. 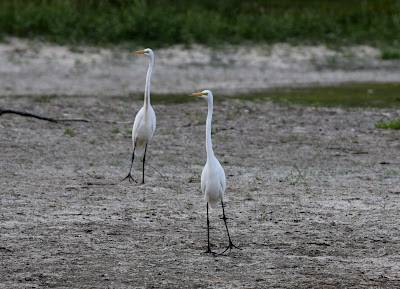 There were lots of Least Sandpipers running around and they seemed fairly comfortable with me and my camera, especially after sitting in one spot for 15 minutes. 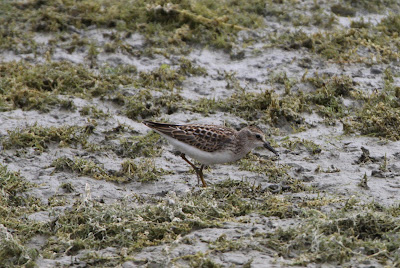 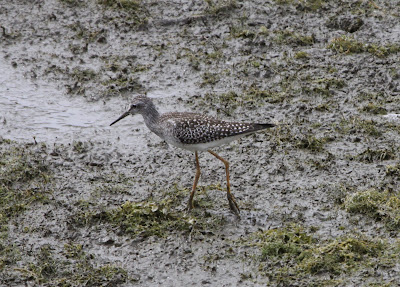 and Greater Yellowlegs too. Nice comparison on the overall delicate "jiz" of the Lesser and the much longer bill of the Greater. 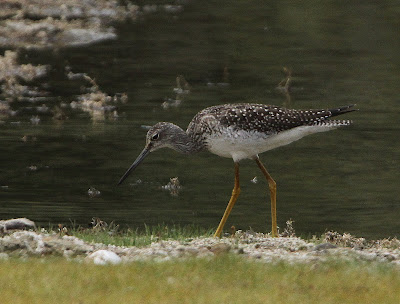 Probably the most nonchalant bird there was Solitary Sandpiper. There must have been more than 1/2 dozen feeding in the pools. 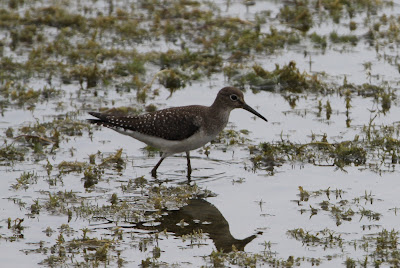 This Great Blue Heron caught a nice, tasty (I assume) bullhead for dinner. 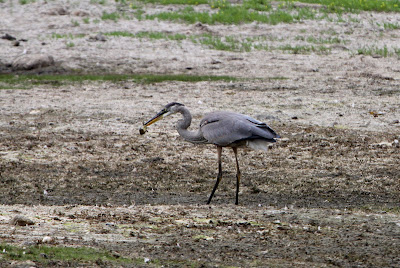 One of the specialties I really got to study though was this Pectoral Sandpiper. 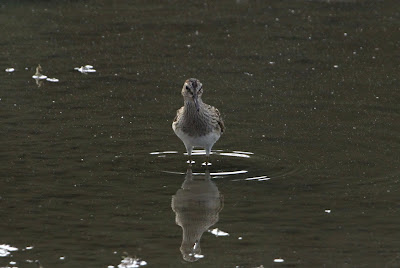 You could clearly see the clean break in the streaking on his breast. It's almost like someone drew a line and then said "don't color below this line". 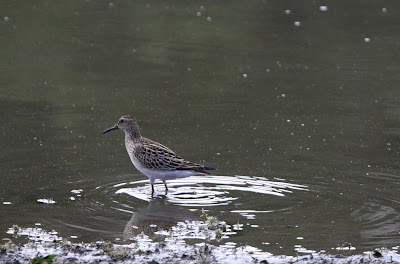 When you see this bird feeding it can just look like a large peep -- which technically it is. 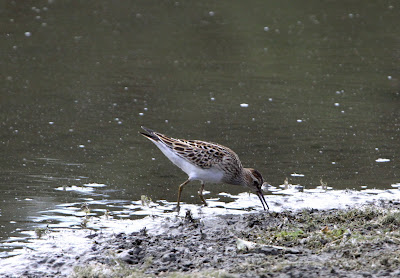 As special as these birds are, though, for me the highlight was not 1 but 2 Buff-breasted Sandpipers! The coloration was perfect and watching it meander over the little grassy and sandy patches was a real treat. 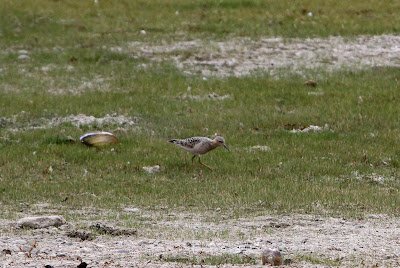 I've seen some super close-up photos of these birds from this location, and the birder/photographers were either very lucky, had super lenses, or just got too darn close. I'm always afraid that I'll flush the birds off so I tend to stay quite a distance away. 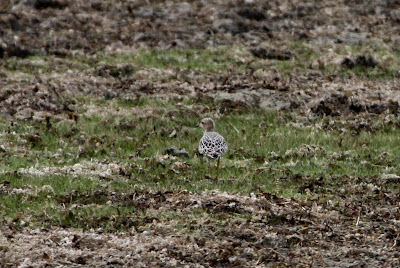 But that clearly didn't diminish my enjoyment. And to be able to focus on that distinctive patterning was tremendous. 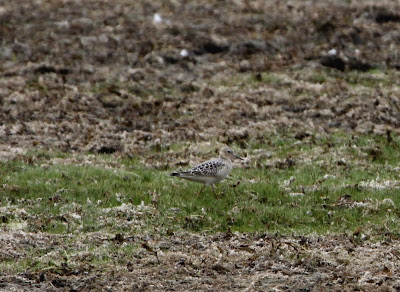 I really think I could have sat there for hours just watching her. Of course, hoping that she would come much closer for that National Geographic-kind of shot. 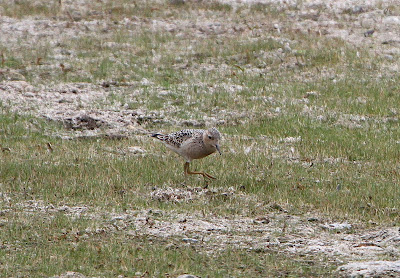 At one point on our second visit in 3 days, we had a glider come sailing over and the birds luckily didn't even look up. Or if they did, they must have recognized it as something other than a predator. Even though we held out breath, the birds didn't flush. 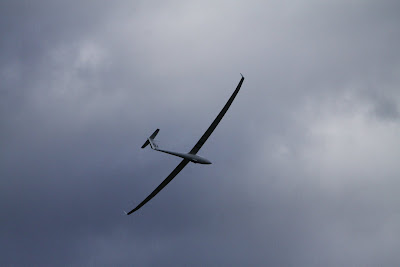 For most Worcester County birders, the real treat was to get a call that Bart Kamp had just had 5 Stilt Sandpipers fly in. Inland these are not common birds at all. And when they do show up, it's usually only 1 bird and they can come and go pretty quickly. 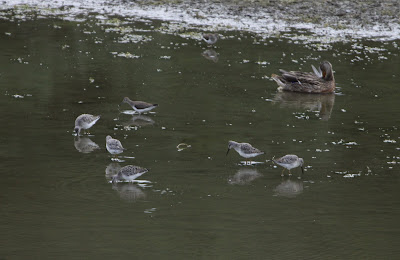 These 5 birds stayed for two days....or rather they flew off and returned the next day. 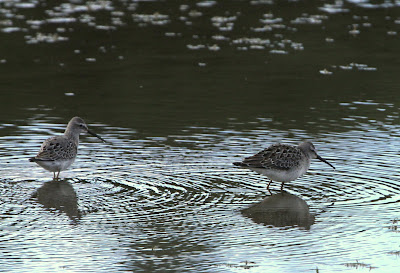 They were quite tolerant of all the birds and photographers who kept creeping closer and closer. 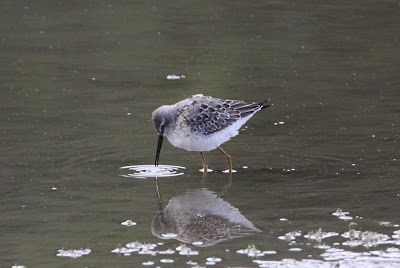 There was this surreal moment when I was going back and forth between shooting the Stilts and the Pectorals. And they I would focus in on the Buff-breasted just to make sure I didn't lose track of them. 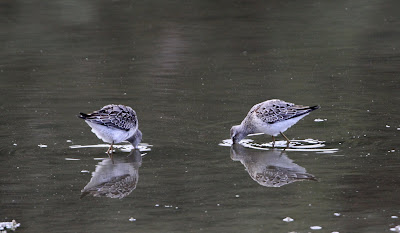 I probably should also mention there were a couple of Baird's Sandpipers there as well. While I got okay looks through the scope, they never really came close enough for me to photograph. 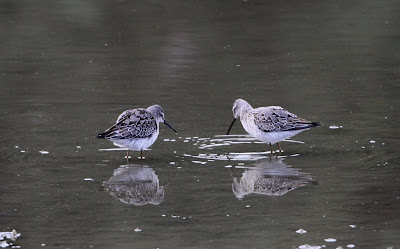 As the evening started to close in, the Stilts headed out.....capping a totally wonderful birding trip for shorebirds close to home. 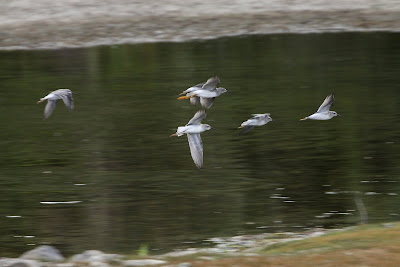 Over our two separate trips to Sterling Peat we tallied 11 species of shorebird. Not bad for an inland count!!!
Enjoy....Sheila

Posted by Sheila Carroll at 6:06 AM