On Sunday, February 6th, we got our second class trip in. And it was quite a beautiful day. We met near the Railroad Bridge in Bourne and with just six of us on the trip we managed wonderfully in just two cars. We decided to bird both sides of the canal near the RR bridge and then head to Falmouth in hopes of finding the Harris' Sparrow, head up to Sandy Neck, do the Sandwich end of the canal and then circle back down to Bourne. 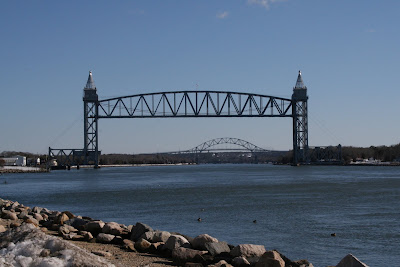 The Bourne end of the canal on both sides is wonderful for close looks at large numbers of Common Eider. 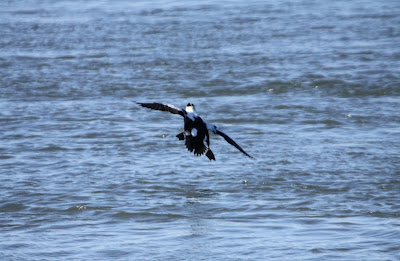 The tides weren't perfect for close looks, but we did have eiders moving all around and managed really close looks at both male and female ducks. 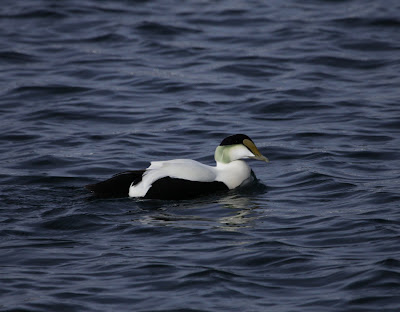 This is the peak time for breeding plumage on the males, and they really are quite beautiful. We spent some time looking for a female King Eider....but to no avail. 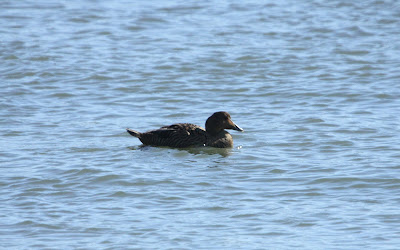 There seemed to quite a bit of traffic in the canal this Sunday morning. For some reason the last couple of times we were hear, we did have much in the way of cargo ships, but today was something different. 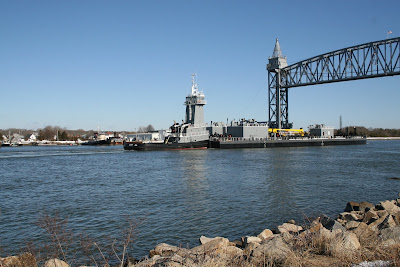 We watched several tugboats escorting barges loaded with cargo up through the canal from Buzzard's Bay to Cape Cod Bay. 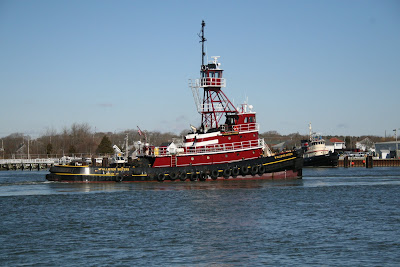 It was interesting to watch the Common Loons trying to stay out of the way of the boats, which brought some quite close to the shore. 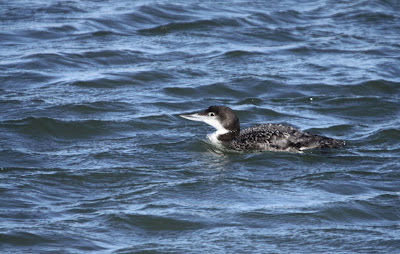 Unfortunately our side trip to Falmouth proved futile. When we arrived at the house where the Harris' Sparrow was being seen, the owner informed us that she had not seen the bird that morning at all. We were speculating whether the milder weather had prompted the bird to move on; however, we learned that the bird was back in the same neighborhood the next day. So it was just a case of us being there at the wrong time.

We decided to head up to Sandy Neck and stopped for at Dunkin Donuts to use the facilities and refresh on coffee and donuts. As we were waiting for everyone to assemble back at the car, I noticed a particularly beautiful weather vane and decided to photograph what might be our only heron "species" of the day. 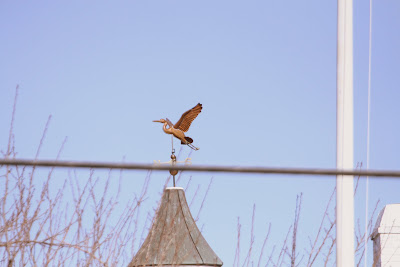 Unfortunately, Sandy Neck was as disappointing as Falmouth had been. They're doing some construction in the area, so parking was very restricted and the small observation platform where we've set up scopes before was behind a fenced off construction site. We did manage to get a couple of good sightings of whales from shore before we headed off to the north/east end of the canal. 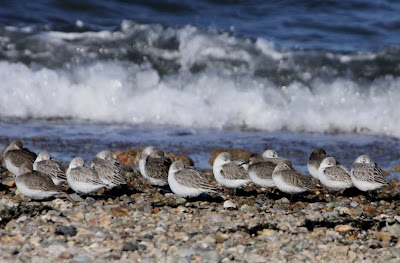 We had a nice mixed flock of Sanderlings and Dunlin on the rocky shore near the restaurant (not sure of the name, I think it's called Hemispheres). For the class it was a great study of these two winter shorebirds comparing the coloration and bill structure.

After a while Mark gave me the okay to try to closer to photograph them, and I was doing well until a local came along running their dog. Although it did provide a couple of good shots of the shorebirds in flight. 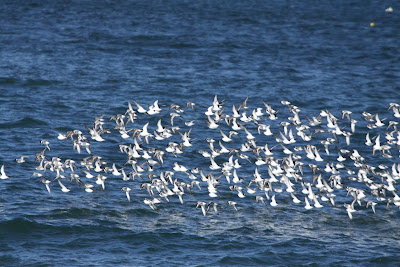 We also had some Purple Sandpipers on the jetty on the far side of the canal...a tough look even in the scope. And while we didn't have any alcids (Razorbills have been somewhat frequent in this area), we did get nice looks at Harlequin Ducks (which were unusual for us in this spot) and these Long-tailed Ducks that were somewhat close. 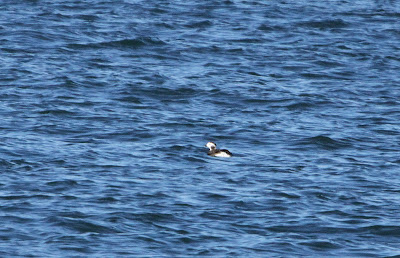 Again, providing great opportunities for the class to study the plumage differences between female and male birds. As it turned out I don't have a lot of shots of this species, so it was a nice bonus for me to be able to get close enough to actually see the long tail on this male. 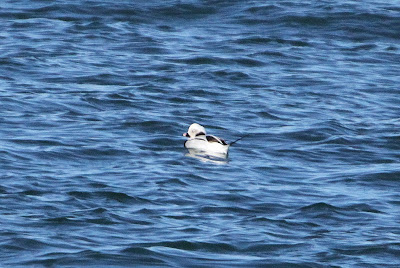 We poked around the nearby Sandwich Marina and had this very close female Red-breasted Merganser paddle out from under some nearby pilings. 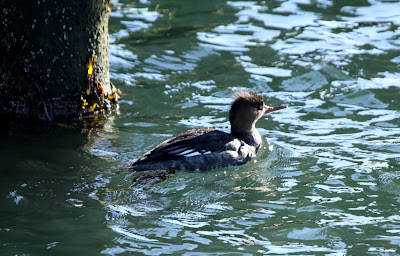 And, as usual, we had a nice flock of Brant on the grass near Joe's Seafood store..... 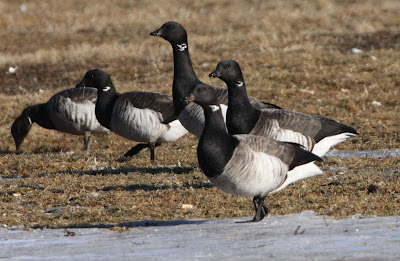 In addition to the ducks going into breeding plumage, you see the same thing with gulls. This adult Greater Black-backed Gull couldn't have been more handsome. 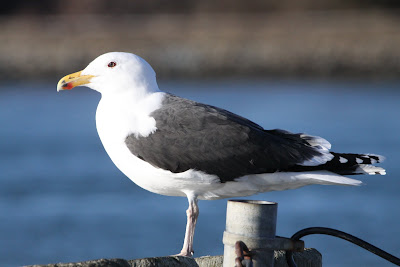 Landbirds were fairly scarce (except at feeders) so this little Song Sparrow seemed kind of lonely as he poked around by himself in the grasses under the benches. 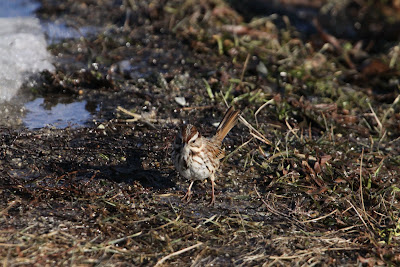 We headed back down Rt. 6A, over the Bourne Bridge and picked up cars in the parking lot near the RR bridge where we had left earlier in the day. As everyone was pulling out, I spotted a hawk perched in the trees at the far end of the lot. So we ended the our list for the day with this Cooper's Hawk. 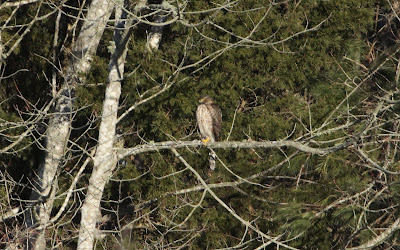 We ended our trip with a total of 36 species in this relatively compact area and had very good looks at several species of waterfowl....just what one is supposed to do on the southeastern coast of Massachusetts in winter!
Enjoy......Sheila
Posted by Sheila Carroll at 8:09 PM