Mark is teaching a 4-week class on spring migration for Mass Audubon's Broad Meadow Brook and we had our first class trip yesterday to south Quabbin.  There were 10 of us on the trip and even though it was raining when we met at the Administration Building at 7:30 we had a great warbler show.  Right from the parking lot we had 14 species of warblers, including a Cerulean.  And a group of White-crowned Sparrows.  This is exactly the weather Mark had hoped for...rain overnight to put the birds down and then a gray start to the day to keep them down for viewing.  Unfortunately, it was quite foggy at the dam, though, so we weren't able to do much looking at the water. 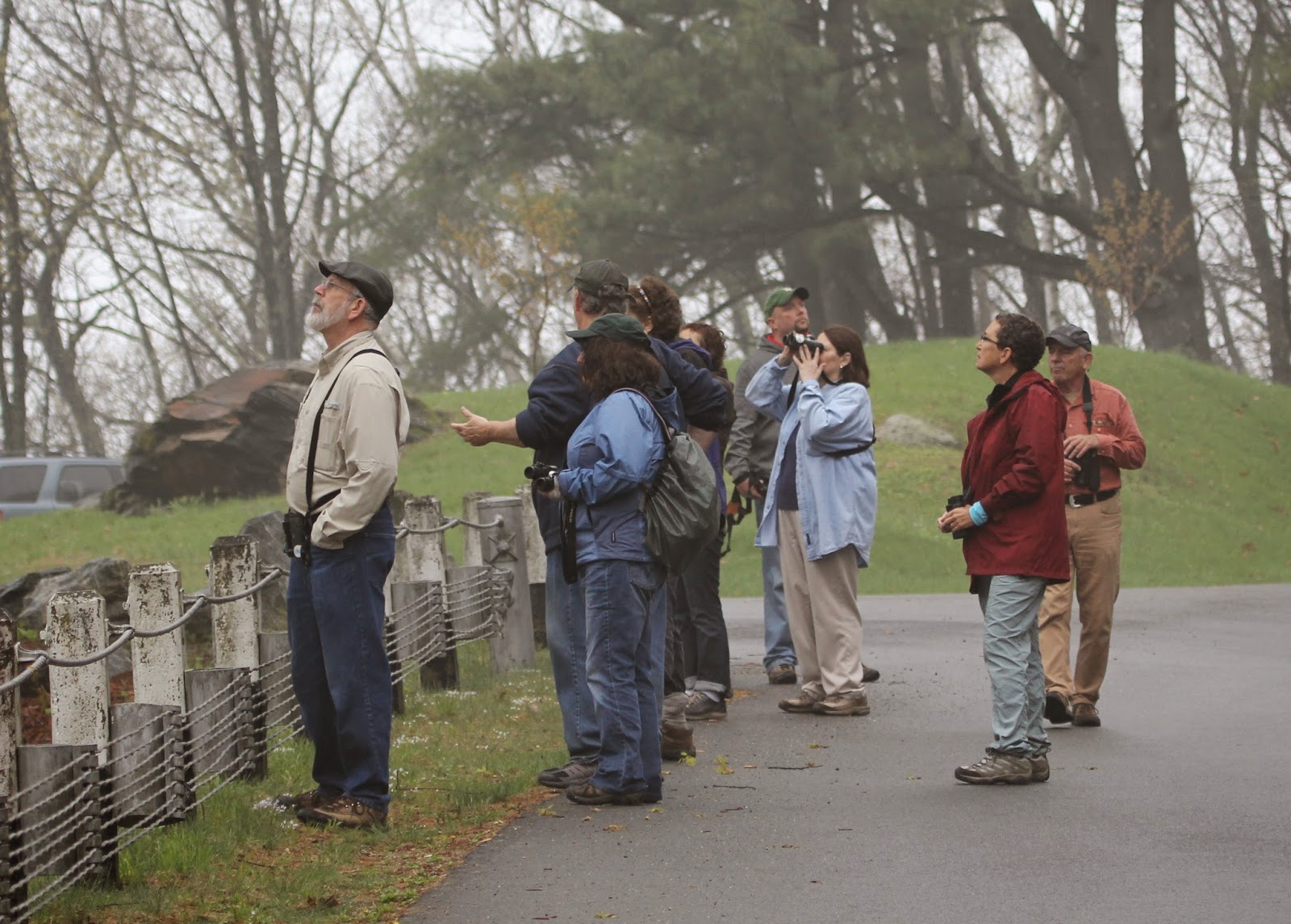 We made a stop at the spillway to check on the Ravens, and as expected the nest was empty.  When we were here a week ago the birds looked like they would be gone from the nest within a day or two tops.  One bird was so ready to go that he was sitting on the edge of the nest and flapping his wings....I think he was probably out of there that day.

As we proceeded up the hill from the spillway we came across more warblers.  The rain had let up and the fog was slowly moving up the hill.  We were concerned that once it cleared, things would definitely move on. 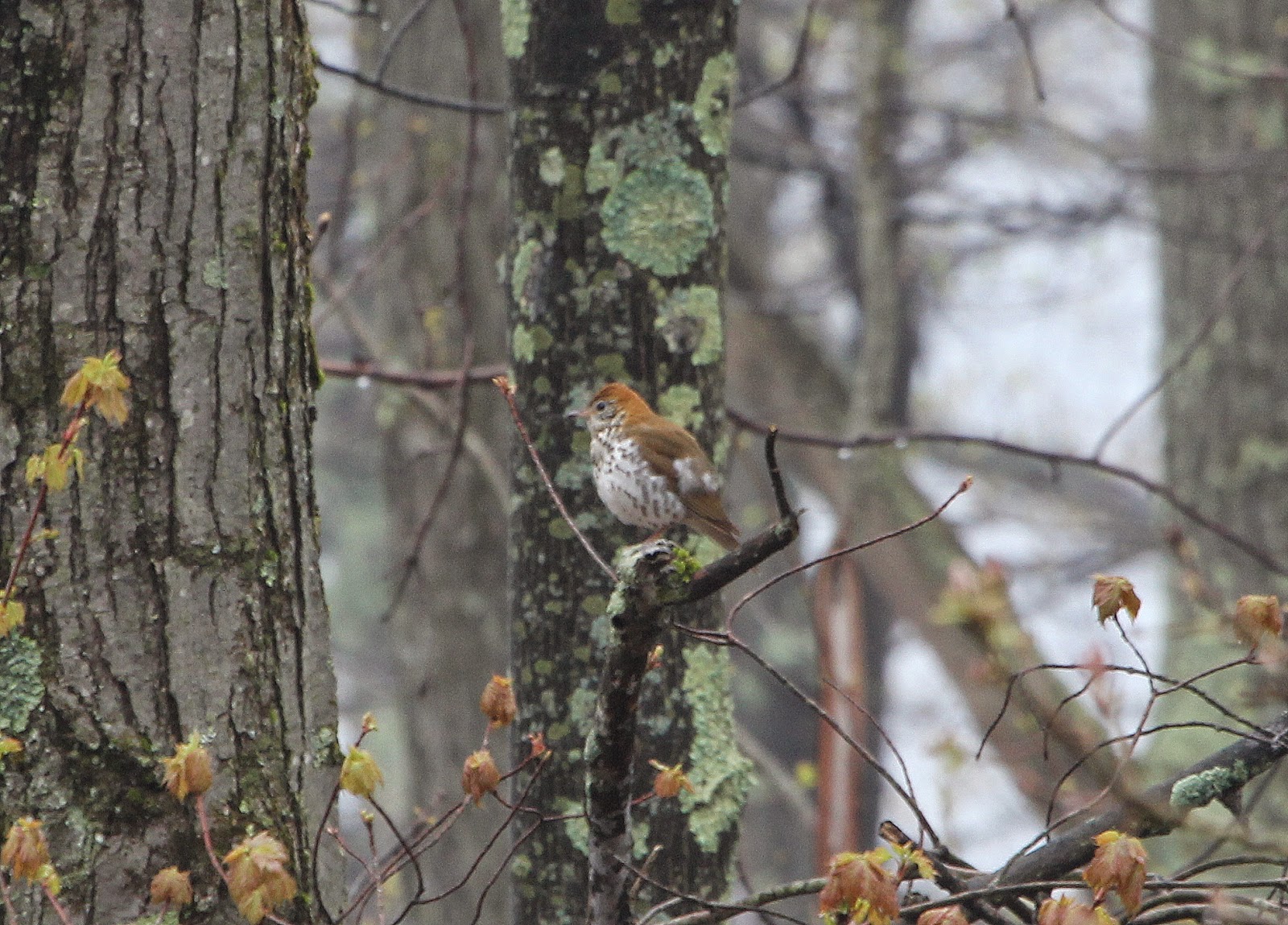 We had several Wood Thrush singing and took some time to find one and make sure everyone in the class got a good look.  These birds can always be a little tricky to find.  We also had a few more White-crowns at the big overlook just below the Tower.  Below is a distant shot of one of the birds...they were all adults.  I think I went through all of last year seeing only immatures in the fall so this was a treat. 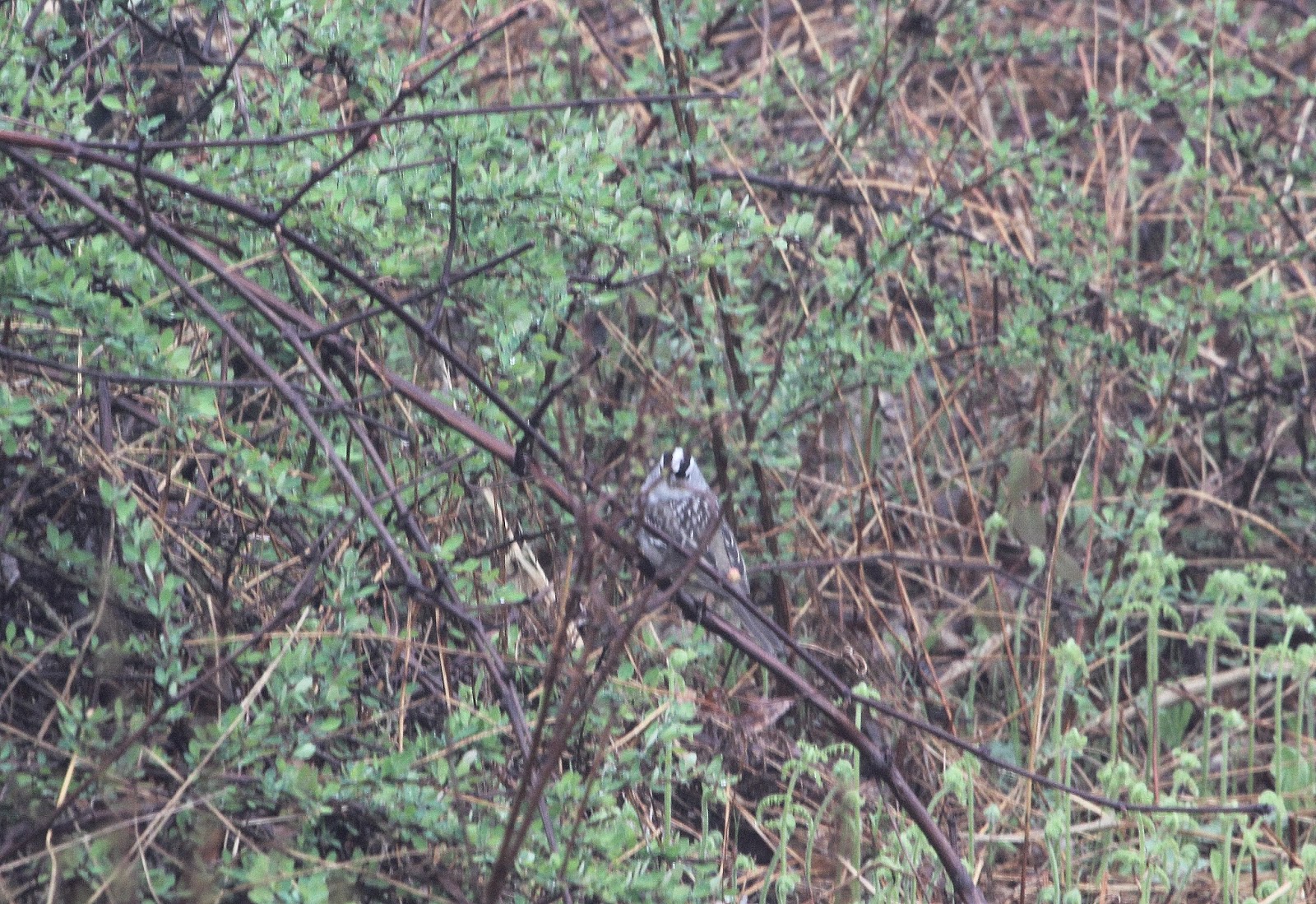 There were lots of Overbirds calling, but I think the American Redstart was the No. 2 warbler call of the morning.  And all we saw were males. 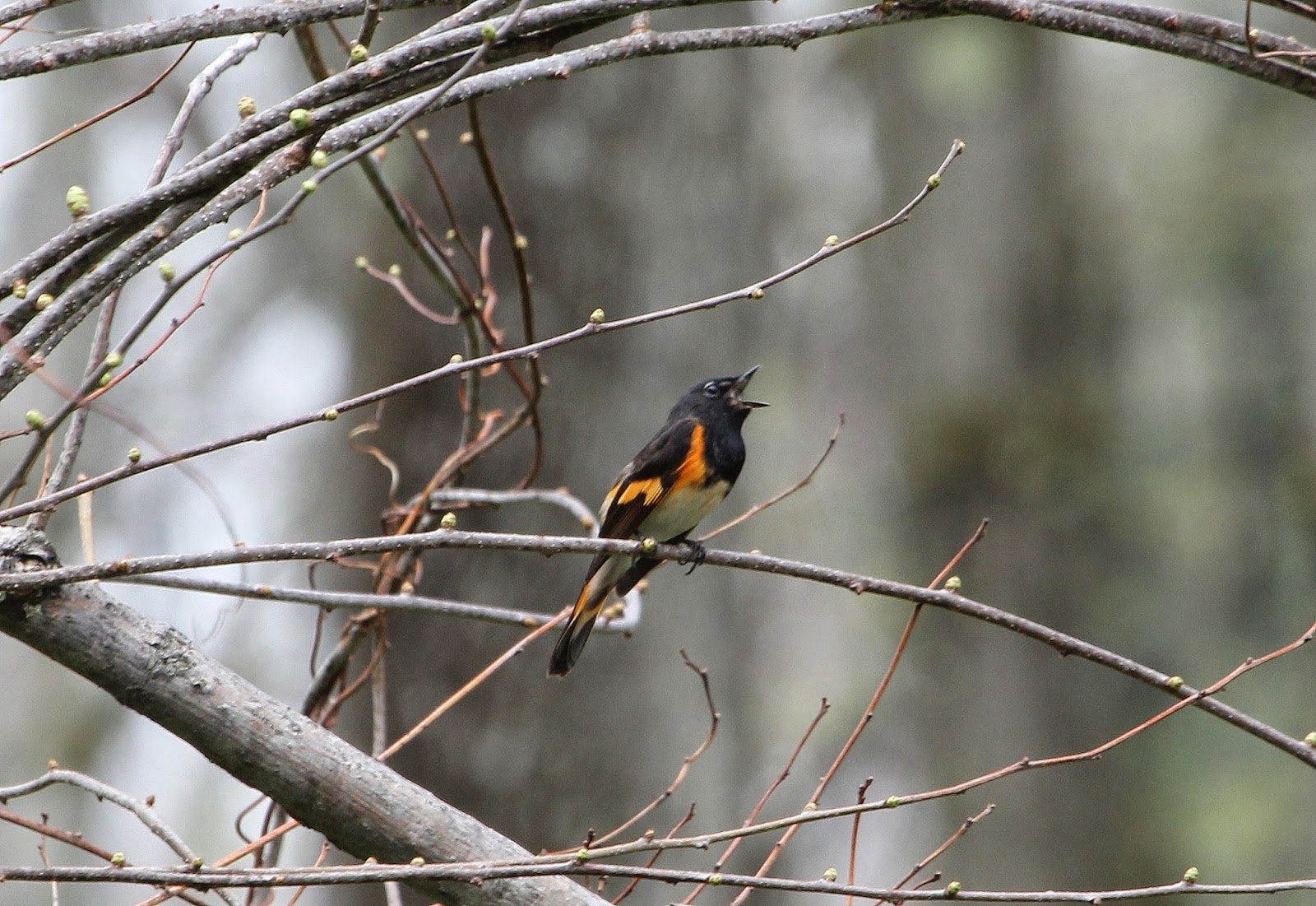 Of course the Chipping Sparrows were quite obvious as well.  We hoped we would have the chance to compare the call of the Chipping with a Worm-eating Warbler, but no luck on that front. 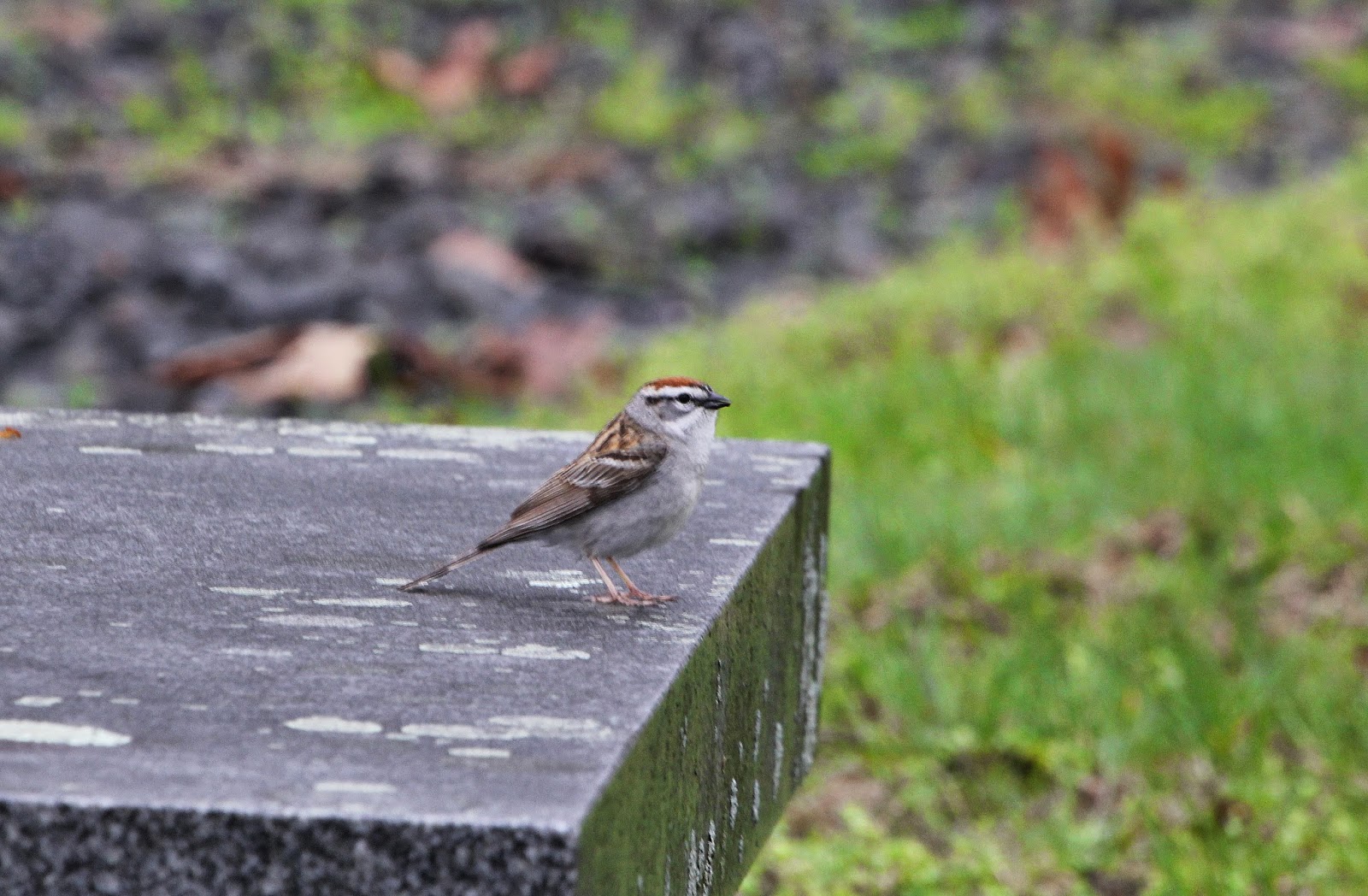 Thanks to Phyllis Pollack for finding us some blooming Columbine.  It definitely seemed to be a bit early to have this flower fully in bloom...but there it was on the rocky hillside just below the Winsor Memorial. 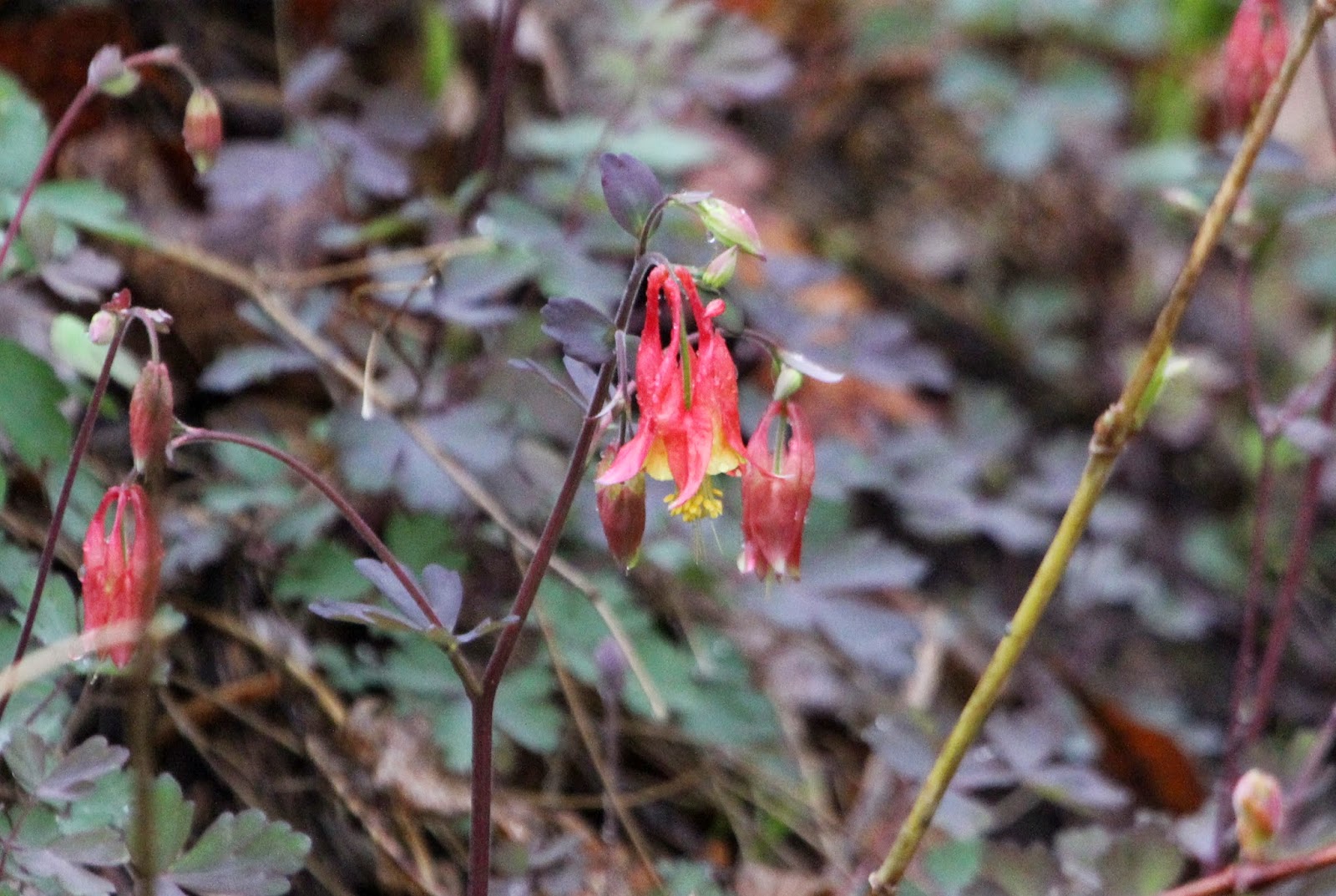 When we reached the Tower, it was pretty obvious that we weren't going to spend much time birding there....so we treated it as a great bathroom stop.  We didn't even have any Prairies singing, which was a bit surprising. 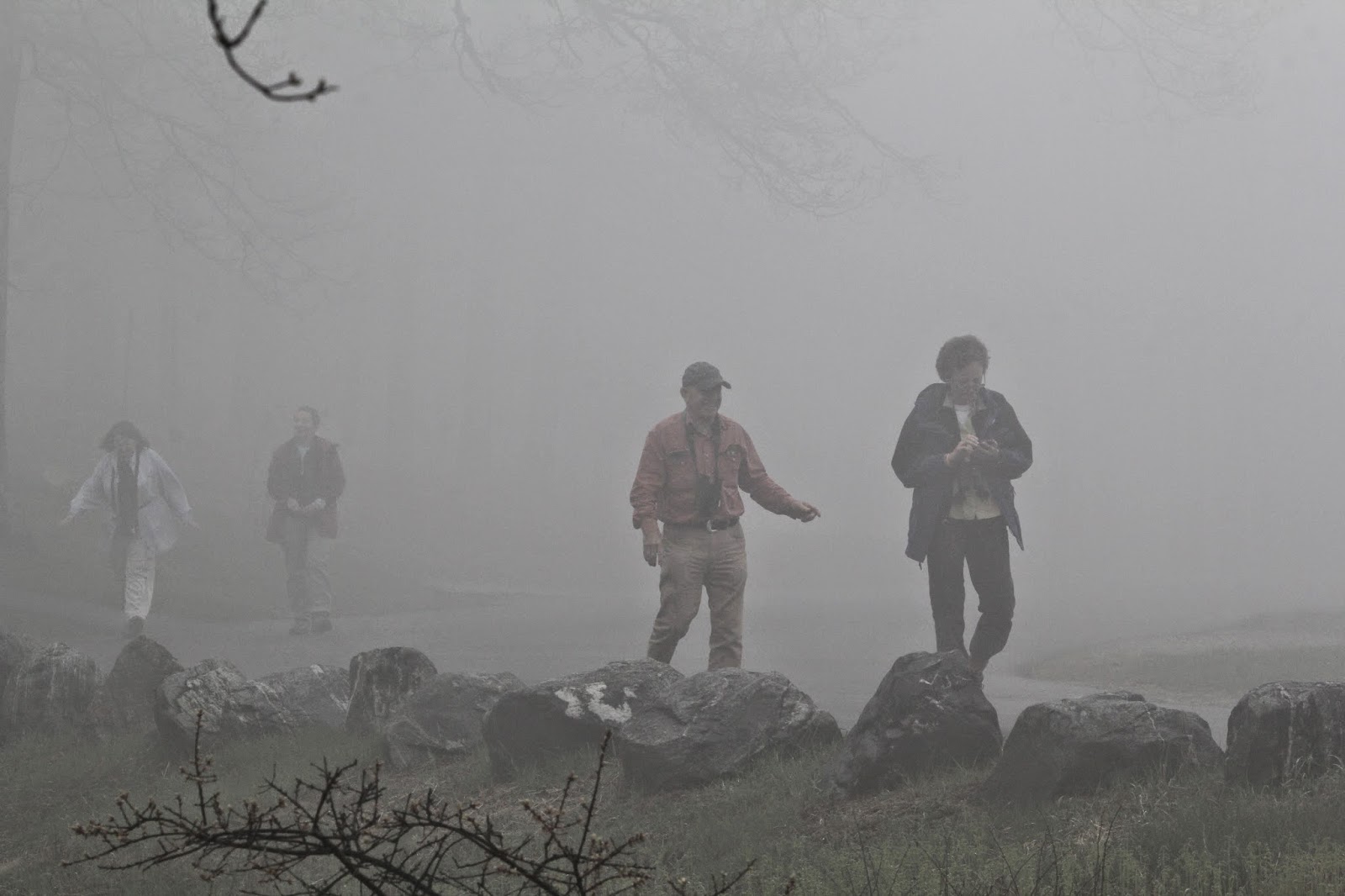 We did make a side detour to the old apply orchard and the Black-capped Chickadees were definitely favoring Ellen Ruell as a feeding station over the other folks.  We were trying to figure out whether it was the brown clothing, the position or whether they really just preferred Ellen. 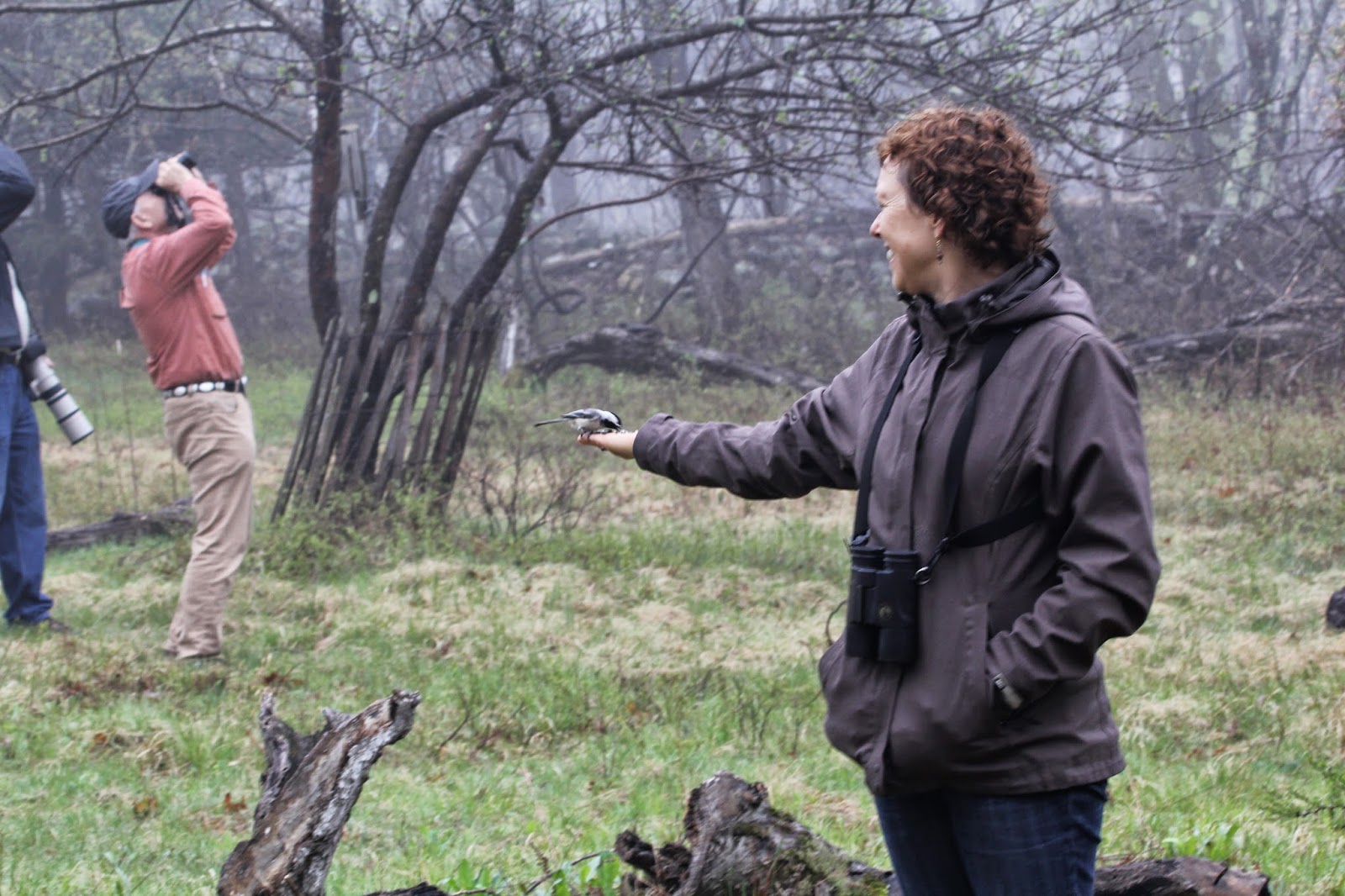 We headed south and made stops along the road and at Hank's Meadow and picked up a few more warbler species, but it was clearing fast and as predicted the birds were definitely starting to dwindle.  We had a nice sighting of a Blue-winged Warbler just north of the Goodnow Dike and even got the bird in the scope so some of the class got really great looks.  Since Mark had advertised this as a "morning only" trip we did break just after noon and some folks had commitments so they departed.  There were a few of us who still wanted to check out the fish hatchery and marsh on Rt. 9 so we headed back through Quabbin Park.

We especially wanted to check out a report that Scott Surner, who was also leading a class trip, had a Hooded Warbler just north of Enfield Lookout.  We spent about 15 minutes but the bird didn't reappear, so we headed out to the fish hatchery. 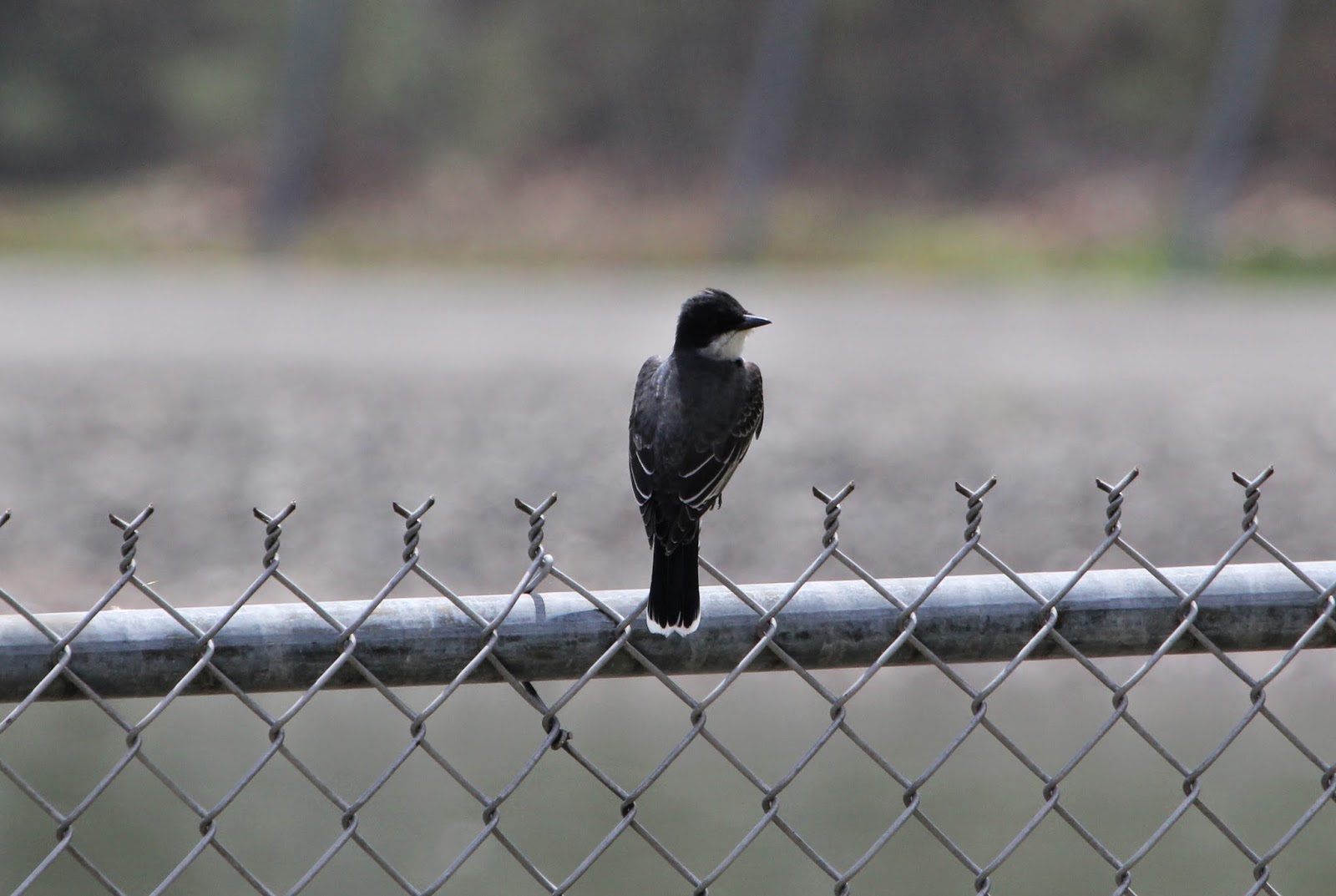 We had some great looks at both Eastern Kingbird and Pine Warbler at the far end of the hatchery near the aeration ponds. 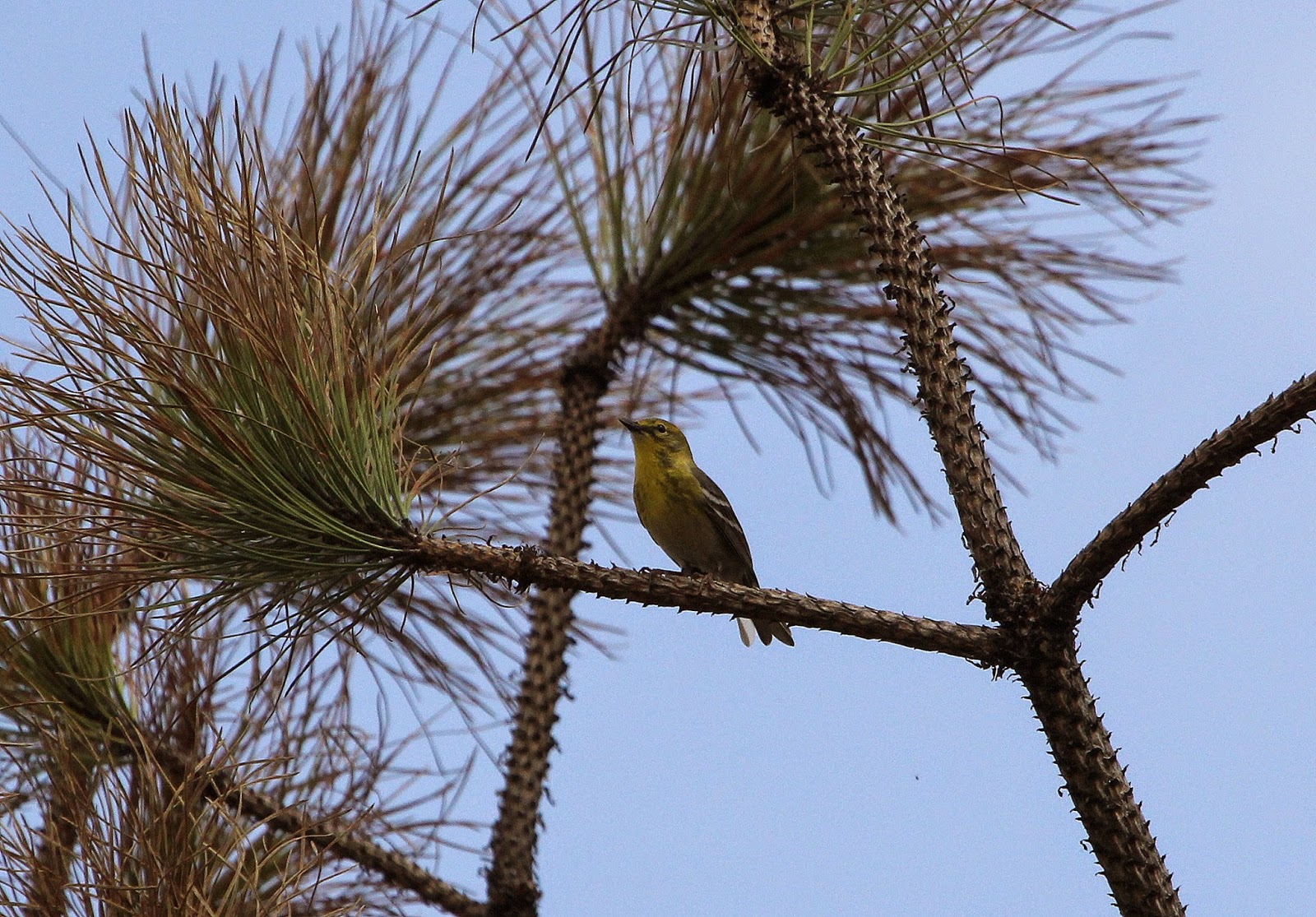 We also had an interesting sighting of a mating pair of American Toads moving across the road the separates the two aeration ponds.  In fact, there were mating toads in both ponds as well.....and they were all doing their trilling call.  On the way back up along the fish sloughs, we noticed a couple of toads that had gotten through the fish netting and were stuck in the cement troughs.  In fact the photo below was snapped just before the toad squeezed through a hole and plopped into the water. 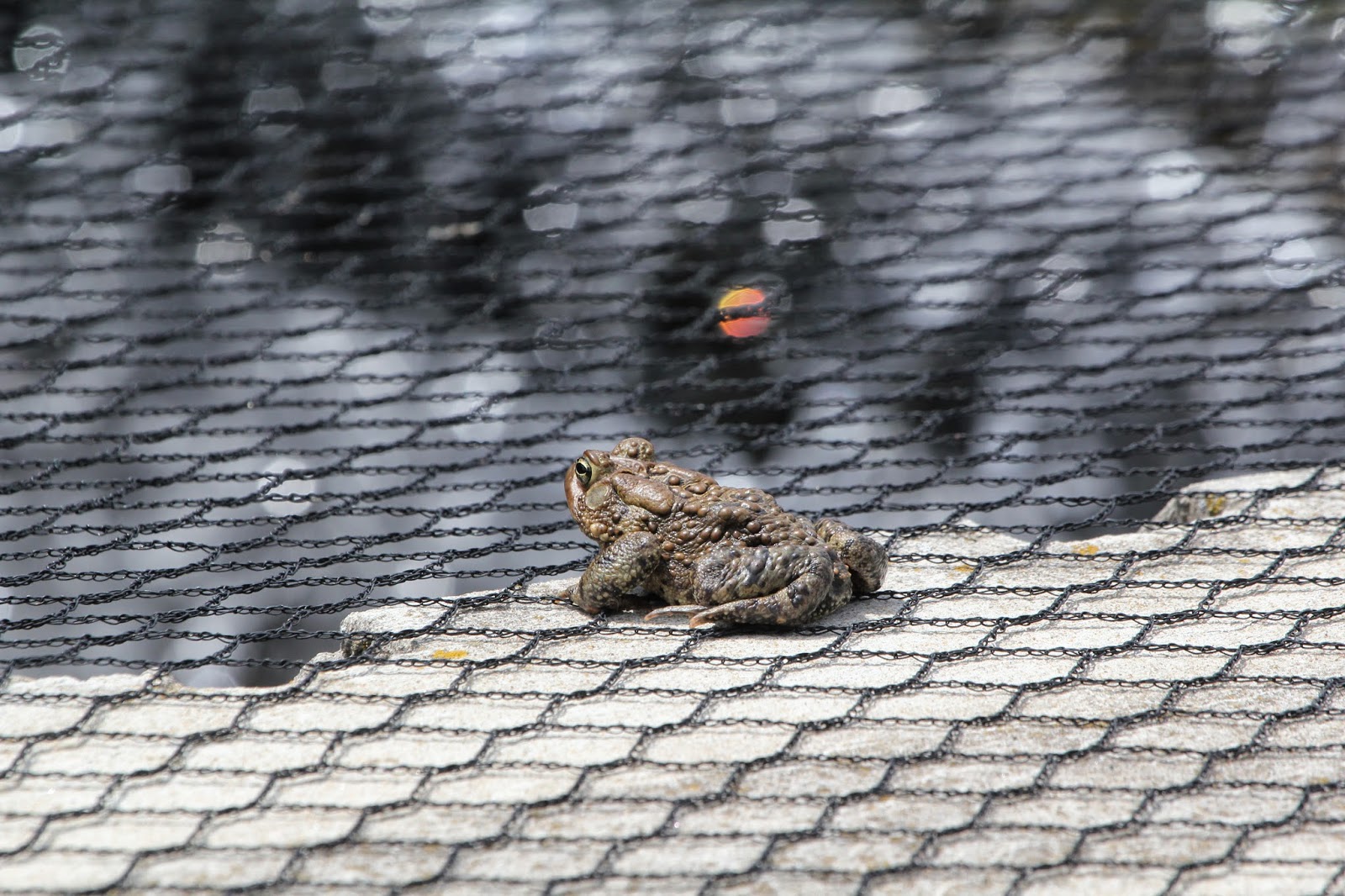 Remember this is a trout hatchery, so the water is going to be quite cold.  And with steep cement sides to the trough there really isn't a way for the toads to climb back out once they're in there.  Sure enough one of the workers came by with a long-handled net and Mark asked him to fish out the 3 toads we could see.  One looked like it might be a little too late, but after a few minutes warming up in Mark's hands he started to move around again.  So we had this little toad rescue adventure while we were birding the fish hatchery.  Oh and we had a Killdeer near the aeration ponds as well....and as expected. 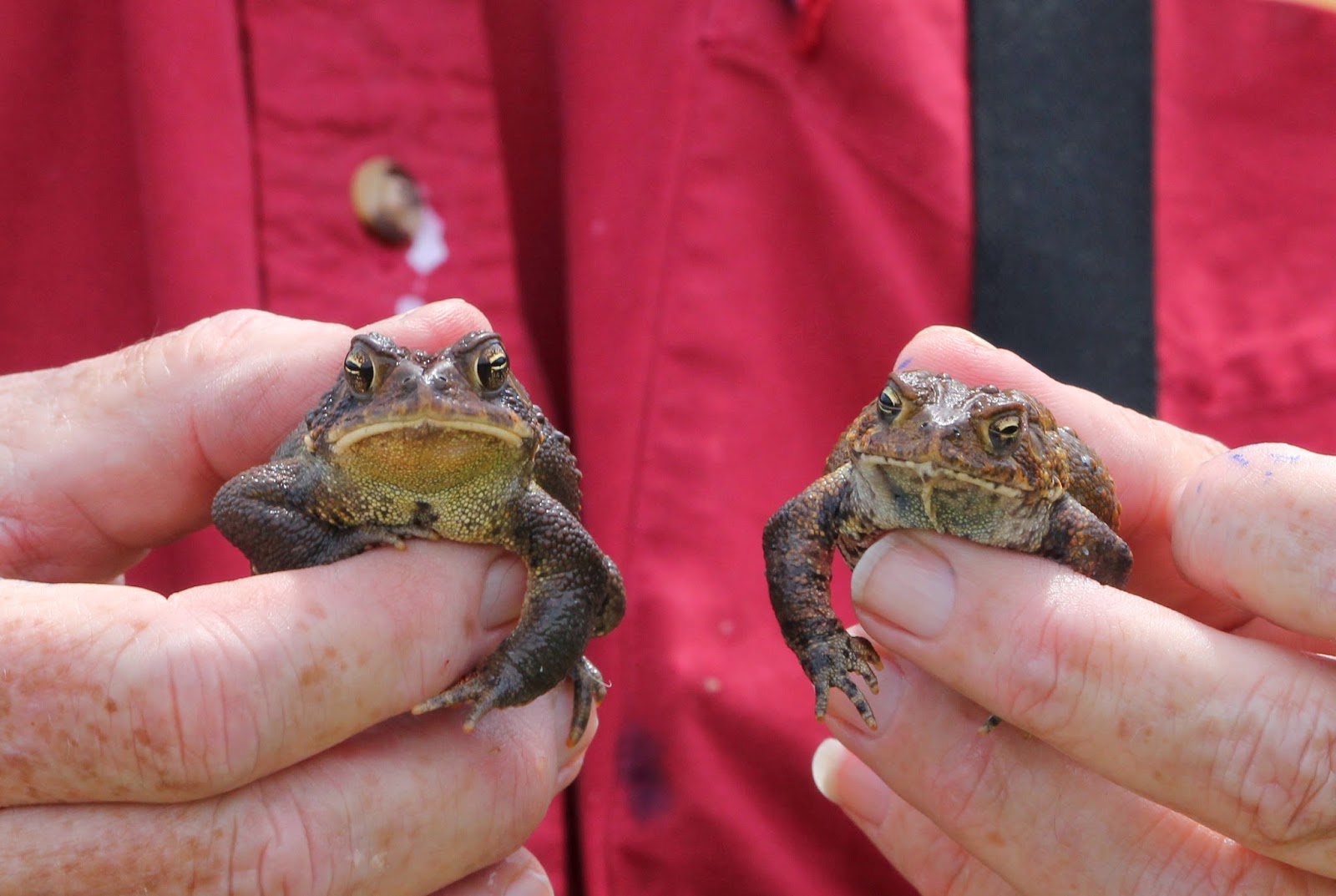 Our last official stop of the trip was the marsh on Rt. 9 between the first 2 entrances to Quabbin.  We took the little path through the woods and from the east side of the marsh near the beaver dam we had a female Hooded Merganser fly into one of the new duck boxes they've installed.  Now when I'm at a marsh like that you know I'm going to be looking for dragonflies....still searching for my first one of this year.  And sure enough I found a newly-emerged damselfly perched on a tiny twig.  You have to realize that this gal is about the length of my pinky but much more slender.  I was able to get a couple of decent shots and when I got home tentatively identified it as a teneral (young) Eastern Forktail female.  I posted the photo on the Northeast Odonata website and got the id confirmed.  So now I can relax....the dragonflies and damselflies are really going to come out. 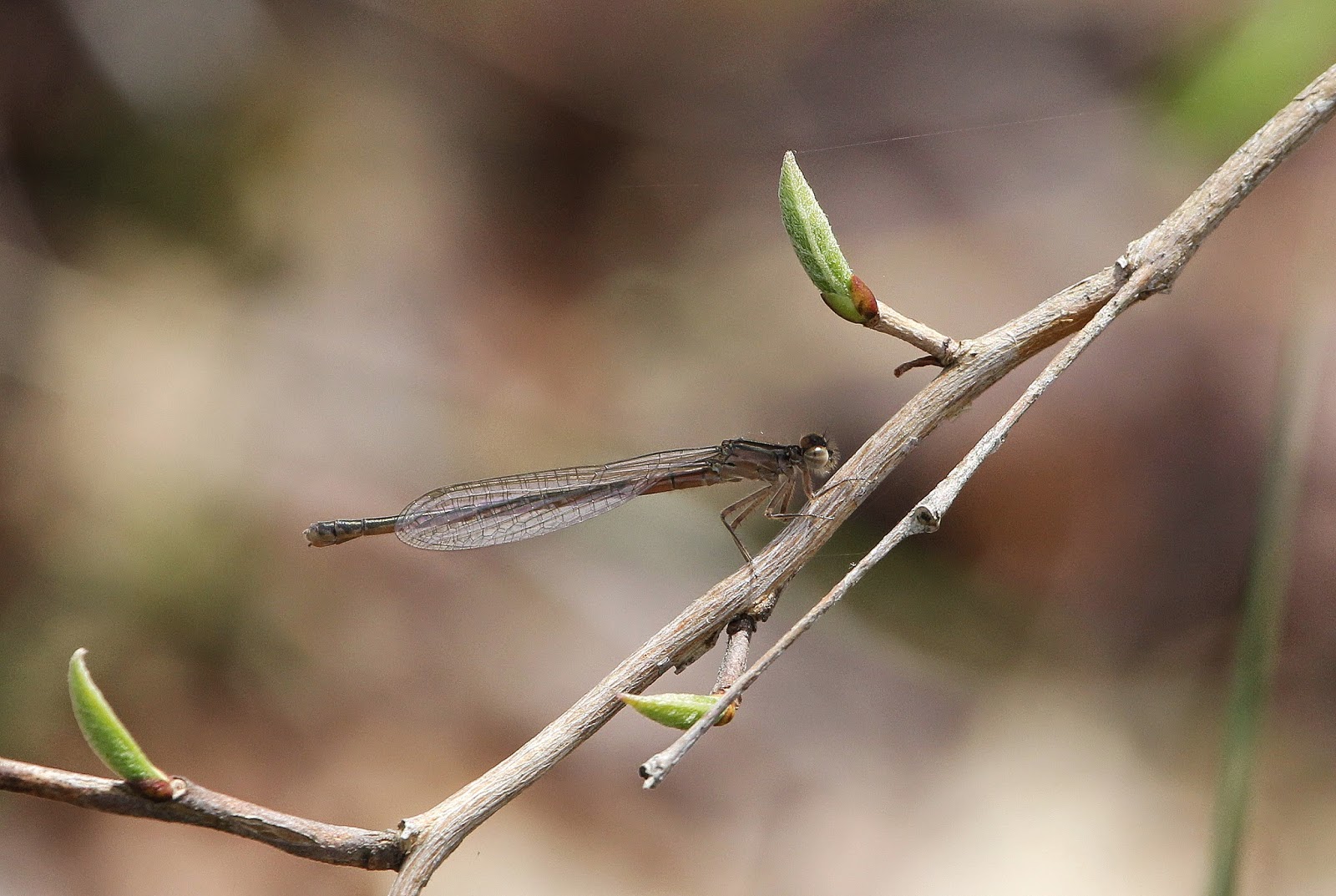 It was a great first trip for the class.  We had 83 species of birds, including 19 species of warblers...and of course 1 specie of damselfly!

Posted by Sheila Carroll at 1:53 PM