Right about now we are wondering if doing a 3-week class on southeastern Coastal Massachusetts was a good idea! Our first class came off without a hitch; however, the trip planned for the weekend of January 22nd was cancelled due to "inclement weather". Then our second class got cancelled due to snow! But we were able to hold our first trip on Sunday, January 30th -- to Plymouth. 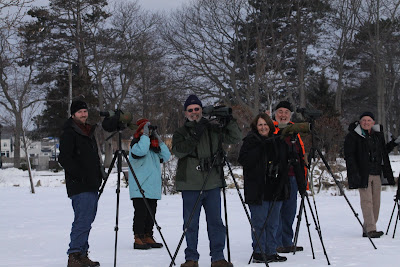 We carpooled from Worcester and met a few other folks at Plymouth Rock hoping to find the harbor open....which we did. 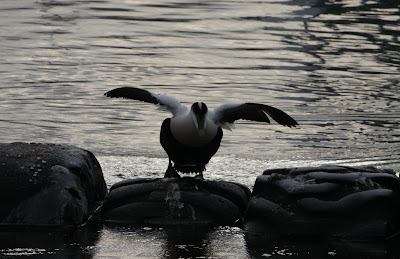 There were large numbers of Common Eider in the harbor and we got some great looks at this handsome duck. Some were even obliging enough to come out of the water and pose for us on the rocks. 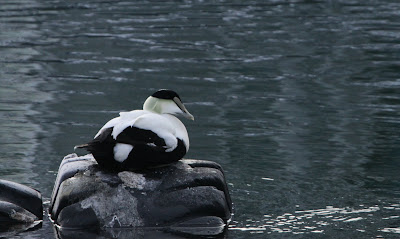 Probably the second most common duck (after Eider) were Buffleheads. Some were catching food quite close to the shore, although this male was definitely cautious with the two females he had in tow. 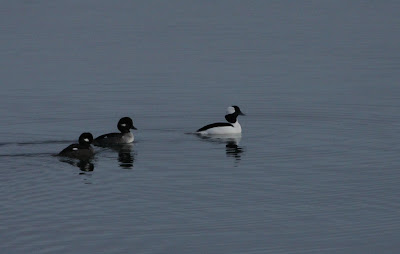 Not sure if he thought my camera was a gun or not, but he decided to take off... 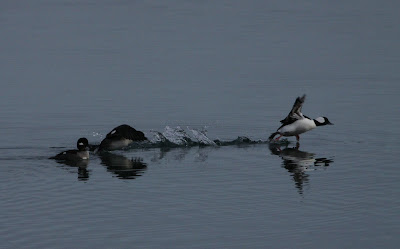 and the females flew after him. 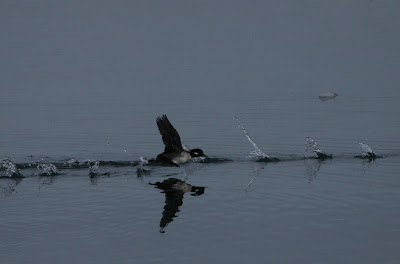 After thoroughly checking the harbor for anything out of the ordinary, we moved off the immediate shoreline to check out the infamous Jenney's Pond. This is the area that always seems to stay open by the Jenney Grist Mill Museum. 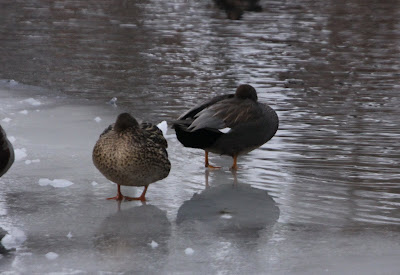 Didn't have as many species of ducks as I would have hoped, but even asleep you can spot this male Gadwall.

One of the more exciting birds, though, was this little Pied-billed Grebe moving in an among the Mallards and Blacks. 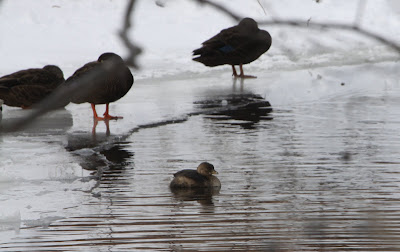 This is a good bird to find in the dead of winter, and since some of the pond was frozen, he seemed to be out and about far more than I usually see one. 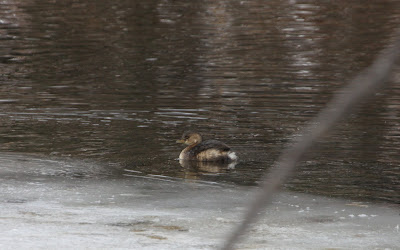 One of the specialties I always hope for is Lesser Black-backed Gull. It seems that this same (?) bird has been visiting this little pond for the last 6+ years. I'm assuming it's the same bird, since that seems more plausible than a new one visiting every year. 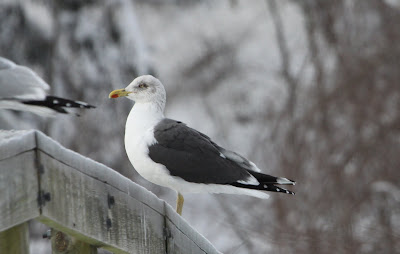 You couldn't have asked for better views on a class trip. 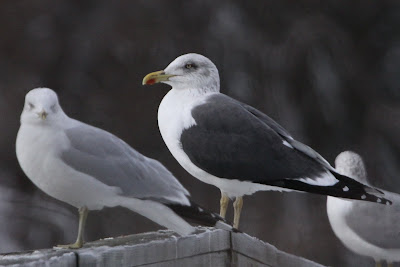 We got to watch him fly off several times, perch on one of the lights in the parking lot, and just hang with the Ring-billeds for size comparison. 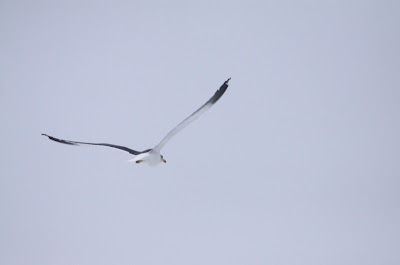 It wasn't until I got great looks at this bird in flight, that you realize just how long-winged and slender he is. All in all a very nice show. 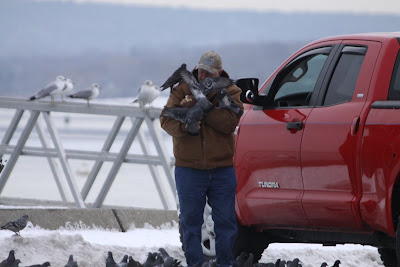 We then went to that parking lot at the entrance to the big jetty and came upon this gentleman who was totally into "his" pigeons. He spent about 20 minutes feeding them all sorts of food and talking to them. Seemed a little strange....especially when they were landing all over him.

And, of course, all that free food brought the gulls in as well, including this pale juvenile (1st winter) Iceland Gull. 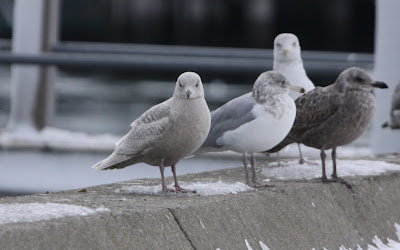 This bird was so much paler than other Kumlien's that we see, Mark's wondering if it might have been a true Iceland Gull from Greenland. 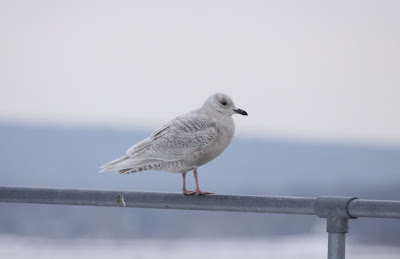 Regardless, he was one cooperative gull and everyone in the class got great looks. 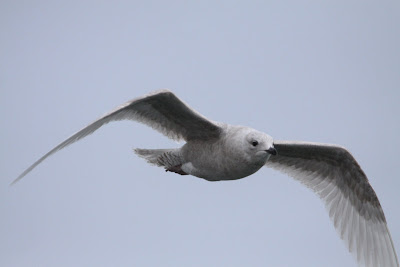 There was also a good show of Brant and Dunlin at the Nelson Street playground, but unfortunately I didn't get any photos since Mark sent me on a field trip to check out Spooner's Pond in Kingston. This is the area where there was a Redhead last year, but all I had there was about a dozen Coot, 2 Pintails and 3 female Common Mergansers. 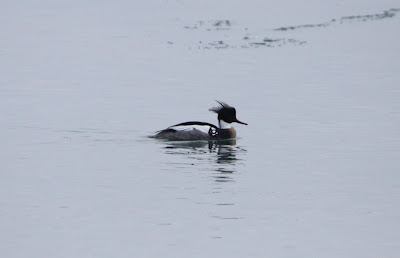 Having both Common and Red-breasted Mergansers on this trip was good, but we missed getting Hooded so we didn't get the merganser "trifecta" that I know Mark was hoping for.

Still it was a great trip, the weather was delightful and on the way home we stopped at Cumberland Farms and got at least 4 different Rough-legged Hawks. And we got one of the class trips in.....now if only the weather will cooperate so that we aren't doing this little, 3-week class into March! 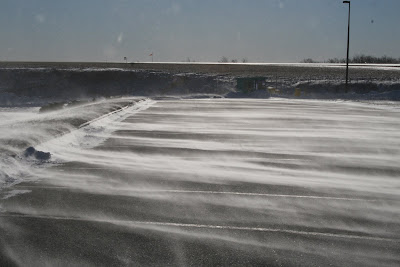 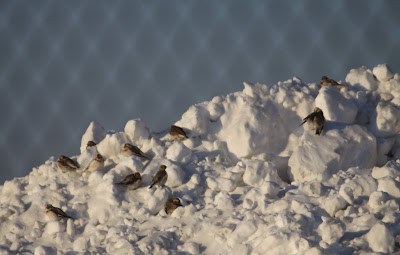 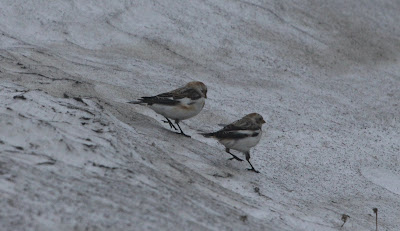 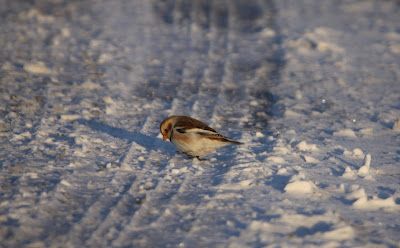 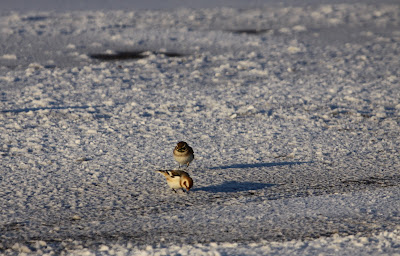 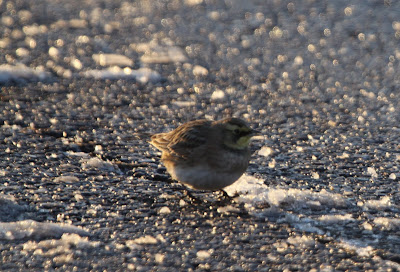 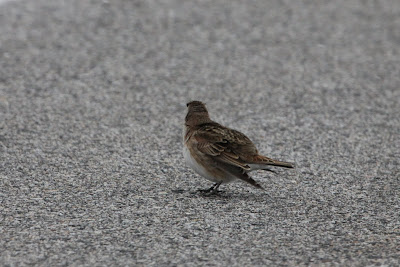 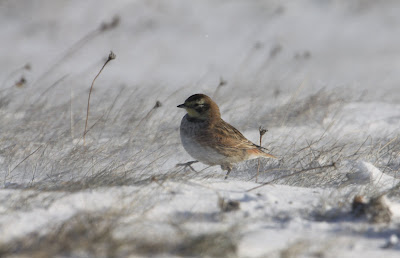 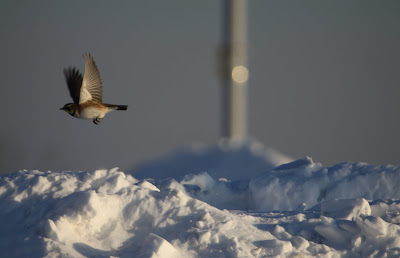 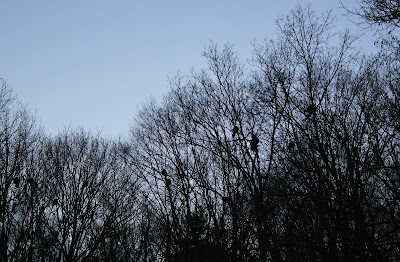