So here's my saga about why I now perform a ritual anti-bird-a-thon weekend..... For years (decades really) I participated in Bird-a-thon. I raised money for it and went all out for the event. In fact, Mark organized the teams from Broad Meadow Brook and we even held strategy meetings so that everyone knew what key birds they needed to get in their section of the state. And then when the event was over, we all talked about the unpleasant things we had seen -- people being rude to one another because they were on competing teams from different sanctuaries. Or limiting the flow of information the week before the event, so that one could keep the good bird to himself. Or even worse, birders from multiple teams taping the same rail or owl in the same spot over and over and over.


Suddenly (and shame on me for taking so long to realize it) it became apparent that these weren't the actions you wanted to see from people who were concerned about nature, who supported environmental organizations, or who were supposedly working to raise needed funds for worthwhile work! So Mark and I expressed our concern to the "powers that be" at Mass Audubon in Lincoln and we offered multiple suggestions for (what we thought were) improvements to the event -- even ideas on how it could raise MORE money for Mass Audubon. And for several years we got a very perfunctory reply -- thank you for your thoughtful suggestions....blah, blah, blah. But nothing really changed. And after a personal meeting with 3 very senior folks from "headquarters" it became clear that they really didn't want to change. Even if it meant more money for each sanctuary, less wasteful gas utilization (do you really need to have 7 teams do Plum Island if you all work for one list?) and a much more bird-friendly event! So let me show you how we spent Friday night and Saturday instead. 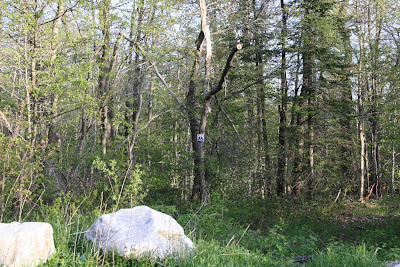 We decided to spend the night in the Berkshires atlasing the 3 blocks in and around Cheshire and Windsor and really trying to fill out the list of breeding birds. As I've mentioned before, the Berkshire blocks of the Breeding Bird Atlas are hurting for participation, so we've tried to help with 3 or 4 blocks each year. 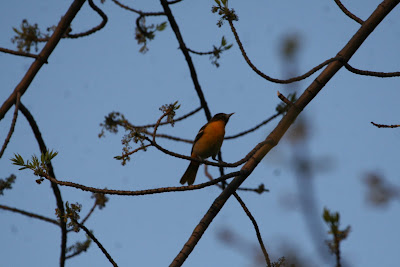 It was wonderful to see the Baltimore Orioles back on breeding territory......and the Barn Swallows (along with the Cliff Swallows and Tree Swallows) were definitely in high nest-building, territory-defending, courtship mode. 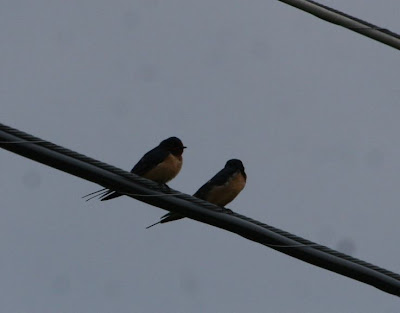 There's something so nice about the twittering (and I'm not talking technology here) you hear when Barn Swallows are flying in and out of buildings bringing nesting material (and in some cases food) to the nest sites. 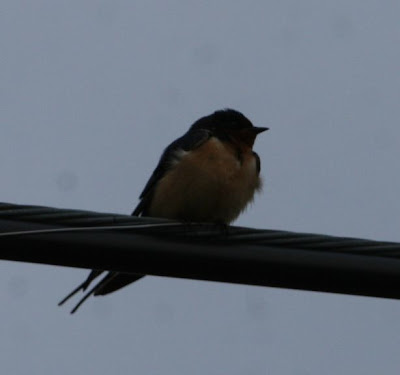 We also got to poke around in areas we hadn't seen before -- this monument on Stafford Hill Road in Cheshire was new for us. 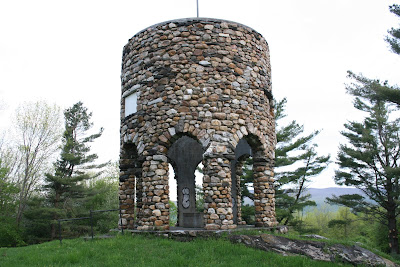 And there was a great plaque inside commemorating the gravesite of Col. Joab Stafford who was hired to survey this area by some Rhode Island investors and ended up purchasing some of the land for himself and his friends....thus creating this section of Cheshire (called New Providence at the time). What I loved about the gravestone was the comment about descending to "the tomb with an unsullied reputation" Not a bad way to be remembered, I guess. 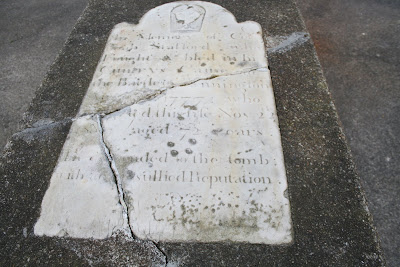 One of the things about this site is the view to Mt. Greylock through the trees. 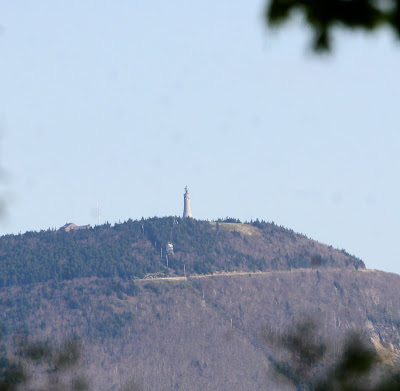 Another nice thing about an anti-bird-a-thon trip is that you take time to enjoy other wildlife....like this beaver who ran across the road and into the grass. Luckily for all of us was that he was pretty fast on his feet! 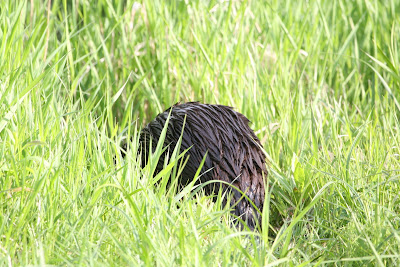 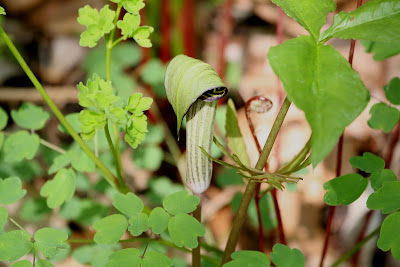 But this breeding Junco couldn't have been more obvious with his "moustache" of nesting material. He kept popping all around and never really wanted to go near the nesting area as long as we were watching. 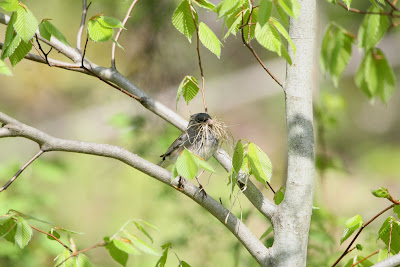 One of the highlights of the trip for me was finally getting some good shots of the not-so-common warblers. This Canada Warbler was definitely defending territory from any other warbler....and from me with my camera. 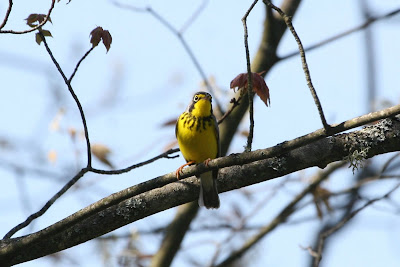 And this Nashville Warbler sat still long enough (near the Canada) for me to take a quick shot as well. 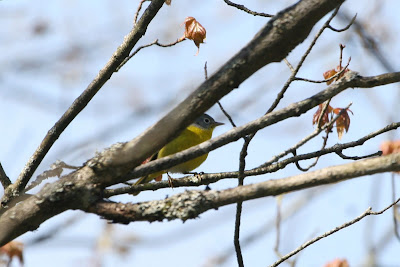 Most of the time when I "see" Ovenbirds, I really just hear them. Or at best I see them flying off.....this bird never made a sound and just kept turning around on the branch as if it were modeling the new spring wardrobe. 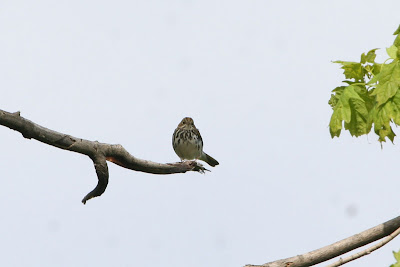 But my favorite bird to photograph was this signing male Mourning Warbler. It was in perfect breeding habitat, but unless we see him again in the same spot (singing more than 7 days apart within safe dates) we really can't count it for the atlas. 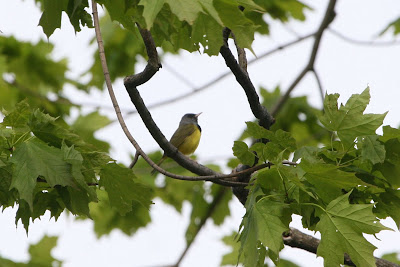 A totally delightful weekend (even though we did run into 2 separate Bird-A-Thon teams).
Now I realize this is probably one of my most provocative blog entries. But I really feel passionate about organizations who have their own agenda and aren't upfront enough to put it right out there. And that was my experience -- resistance to change, yesing us to death, and basic organization bull****! So why do I still support Mass Audubon? Because I realize that organizations are imperfect -- made up of humans (like me) with lots of flaws. And also because of people like Deb Cary who is the director at our local MAS sanctuary, Broad Meadow Brook. She has given us total support and has also tried to raise our concerns to Lincoln -- and has even designed Broad Meadow Brook's participation in this event as a total local effort, focusing on Worcester County.

So I continue to give to my local sanctuary, and work on projects for the broader organization (like the Breeding Bird Atlas) because I can support those efforts. But you won't see me doing Bird-a-thon. And thank goodness I don't have to get fired up for another whole year!!!


In the end, get out and enjoy nature, do what you can do on a local level, or a national level, to help protect this environment -- 'cause if we screw this up, we won't get a second chance.