Saturday (4/25) we decided to head out to our Berkshire blocks to see if we could get some of the early birds for the atlas. We got up and left at about 3:30, but by the time we hit Moran WMA in Windsor the sun was already starting to rise. We did manage to get both Woodcock and Snipe (both breeders) along with the breeding American Bittern pumping down in the marsh. There was a Kestral hanging around a field where there was a Kestral box.....so here's hoping! 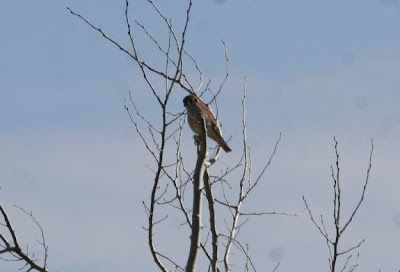 We also spent some time in the parking lot just watching for things to fly by and as the morning warmed up we saw some of the early Broadwings taking off. 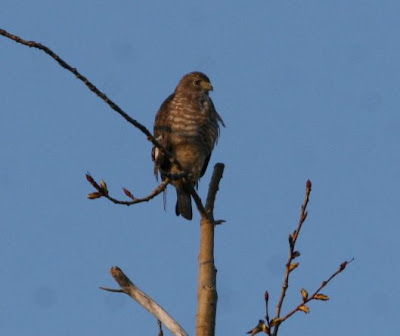 We also had great looks at Osprey, Sharpies (displaying) and even a wonderful aerial display from a pair of Goshawk. 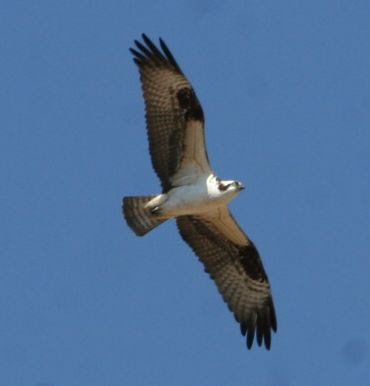 As we started to poke around the back roads, Mark found a pair of Robins building a nest. As it turns out, this was just the first of several for the weekend. 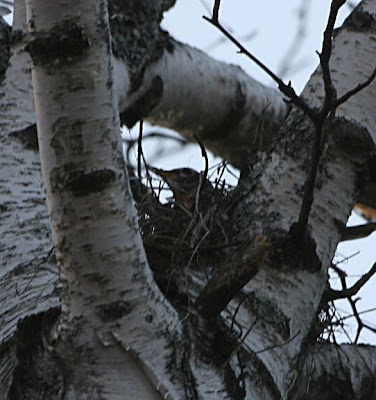 We had Purple Finch in full song....along with Song Sparrows setting up their nesting territories. 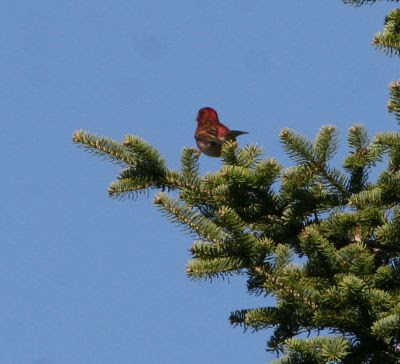 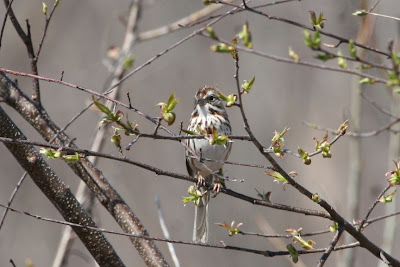 A Sharpie came bombing through the area and all the land birds disappeared deep into the woods. The one exception was this little Hermit Thrust....he just seemed to freeze in place. And he actually let me get quite close before he, too, ducked for cover. It was absolutely wonderful to hear singing Hermit Thrushes again. It's one of the great springtime songs and I never tire of it. That true of Wood Thrush as well, but only the Hermits were in at Windsor. 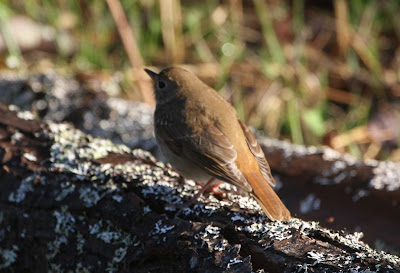 Nesting seemed to be on everyone's mind and we watched a pair of Chickadees meticulously prepare their nest hole in an old birch tree. At first all you could see was the tail.... 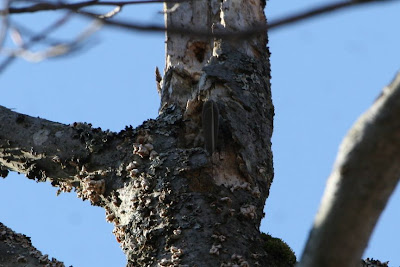 Then he/she started to back out of the hole.... 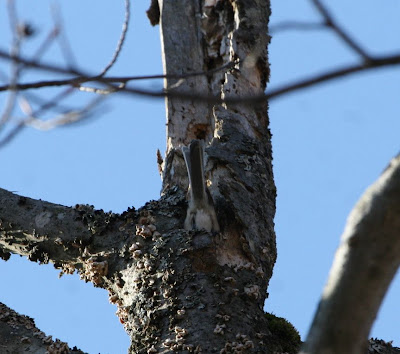 and it certainly seemed like a lot of work for just a small mouthful of wood chips. 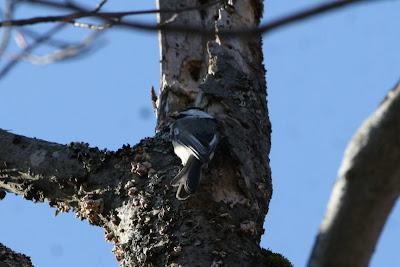 We also found a nice large patch of Horsetails (I think it's the Scouringrush Horsetail). These plants are very primitive and we've found them in several areas of the Berkshires, both north and south. This was my first chance to use my new macro lens, so I'm still trying to figure it out and plants seem to be a good subject. Although I must admit I can't wait for the butterflies to be out in force. 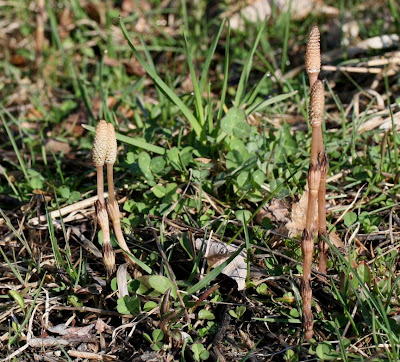 Since nesting seemed to be in force for a lot of species, we weren't surprise to have a very persistent Flicker drumming at the nest hole. 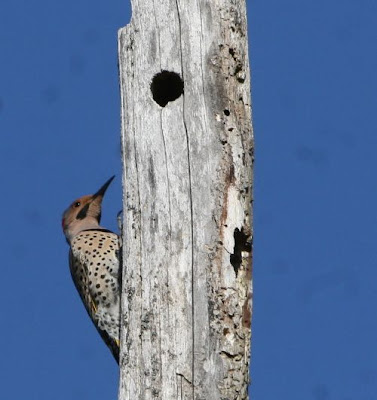 This bird was so intent on the female nearby, that he practically let me climb the tree he was in! 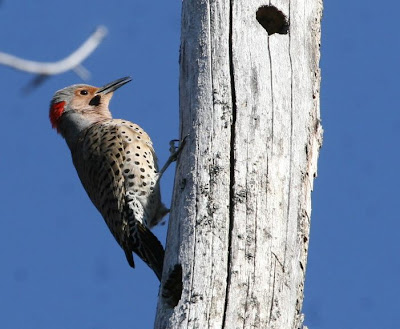 On Sunday (4/26) we decided to stay local and headed down to our Southbridge atlas blocks to log a few hours there. Things aren't in full swing from an atlasing point of view yet (there are these pesky Safe Dates to follow), but we did spend some time at the Westville Dam and were able to confirm a number of species including Carolina Wren and Rough-winged Swallow. 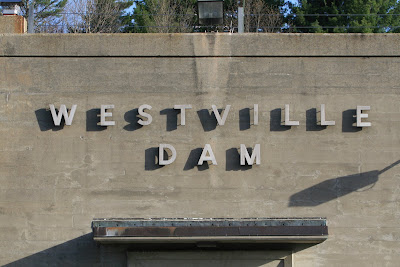 Southbridge must love forsythia, since we came across huge plantings in numerous places. 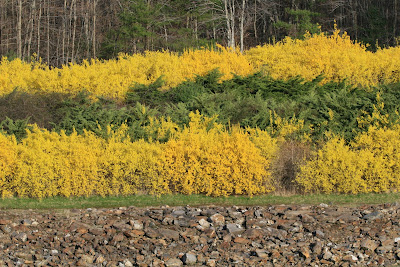 The big surprise while at the dam was to find several Red-eared Sliders along with the Painted Turtles out sunning themselves. We even had a smaller Musk Turtle! Not often that you have a 3-turtle day in Central Mass. These are those little green turtles you get in pet stores and people often let them go in ponds once they've gotten over the charm of having a turtle as a pet. As you can see, they can grow quite large. 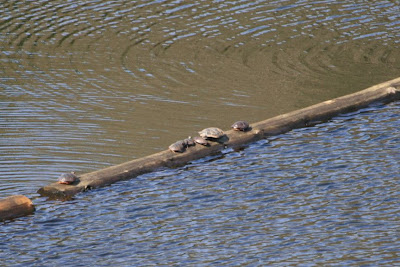 Driving around we noticed that Bluejays were pretty evident....but we weren't able to confirm any Probable breeding behavior as of yet. 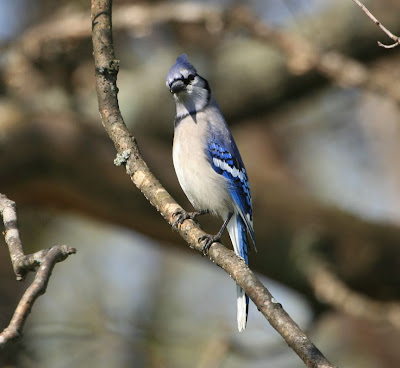 We did, however, come across Robins nest-building again. Much like the ones in the Berkshires the day before, these birds were very intent on getting the nest built and didn't seem to mind my standing there with a camera documenting their efforts. 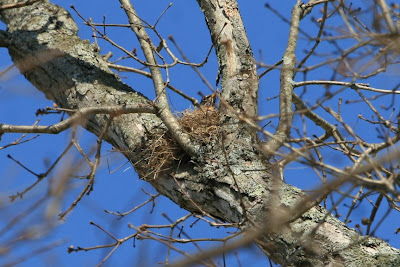 And similar to the Berks, Flickers definitely were in high display mode. This pair were very noisy and the male was constantly displaying to the female. This is one instance where I would have preferred taking a digital movie rather than stills, since the jerky movements and twisting of the bird is really quite entertaining to watch. 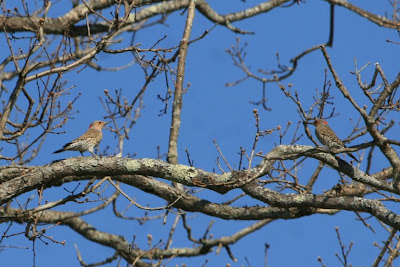 So even though the major time period for breeding bird behavior hasn't technically arrived, we saw quite a bit of it from birds in both the western and central parts of the state. No reason to go east of 495 as far as I'm concerned......