The Nostalgia of Chasing a Rarity

On Columbus Day after birding the Westport/Acoaxet area, we returned to Worcester to find that a Brown-chested Martin had been found at Cumberland Farms in the Middleboro area. We sort of kicked ourselves for not checking MassBird on my Blackberry, but there wasn't much we could do. We agreed that if it was still being seen on Tuesday we would try for it in the afternoon. However, the weather was not great and we made the decision not to go for it. So after hearing Tuesday night it was seen several times we decided to go for it Wednesday a.m. We don't usually chase birds the way we did 25 years ago, but even though this wasn't a "life" bird, it was a North American bird (and a Massachusetts bird to boot!) I have to admit that I have a soft spot for Massachusetts list birds. After all it was our sighting of the Jackdaw on Martha's Vineyard in the early 80's that was responsible Mark and I deciding to get married....but that's a story for another time. 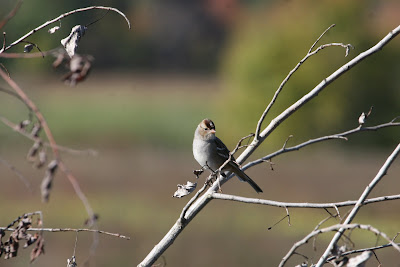 We made the decision Wednesday a.m. to take the morning off work and make a run for the Martin. I decided that I would be able to catch up on work this weekend with the rain forecast for tomorrow (Sunday). We got to Cumbies just before 10 and the bird had flown over just 5 minutes earlier....but was currently nowhere to be seen. The numbers of White-crowned Sparrow were pretty spectacular though, so I contented myself with shots of sparrows darting back and forth across the main dirt road and let the 40 or so other birders keep looking for the Martin. 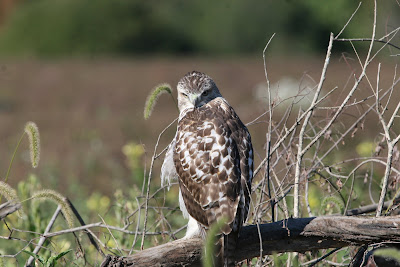 A juvenile Red-tail allowed quite a close approach and didn't even fly off as I passed him. 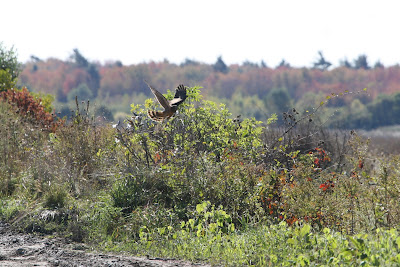 As expected, there were numbers of Harriers in the area. After about 10 minutes Mark spotted the Martin coming in high over the trees to our east. 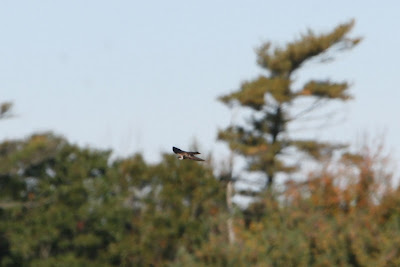 Suddenly there it was -- Progne tapera. This bird didn't spend a ton of time with other swallows; we had trees, a barn and a rough-wing all fly over. But the Martin seemed more solitary; however, it did get bombed by the Rough-winged Swallow once while we were watching it. 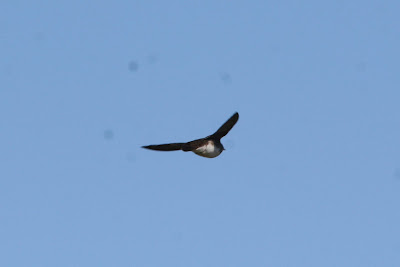 So let me apologize for some of the less-than-clear shots -- catching flying swallows in my camera is one of the many things I still need to master. I did want to include a couple of different shots so that you could see different aspects of the bird. For example, the one below gives you a good idea of just how broad that wing can look. While somewhat larger than most of our "regular" swallows, the bird is not nearly as large as our Purple Martins. 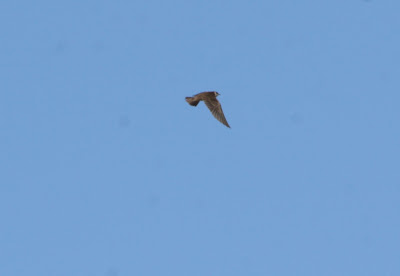 Also (as anyone who mentions this in Mark's presence knows) you really can't judge size against a clear sky -- there aren't any reference points, so how do you know it's not just closer or further away? Of course, it was interesting to overhear some of the birders at Cumbies doing just that.

To me the most notable field marks were the coloration, the size (when you saw it with the Trees or the No. Rough-winged) and the breast band somewhat similar to the Bank Swallow. Also the brownish sides when it passed close enough to get a good look. The question I have is could I pick this out in one of the really large flocks of swallows or would I just overlook it in the chaos and "noise" of all the other swallows. Like I said, this wasn't a life bird -- we had this species at Iguazu Falls in Argentina. And even though the Cumberland Field farms aren't as exotic, this was still an exciting bird to get on our Massachusetts state list.

We were back in Worcester before noon, and I was able to get into work for the full afternoon. I really like it when things work out like that....sorta makes up for all the times when you just miss the bird by 5 minutes and it doesn't show up again! And of course I have a long list of those as well.
Enjoy.....Sheila
Posted by Sheila Carroll at 8:43 PM