In that wonderfully quiet time between the end of the atlas season and the chaos of Christmas counts, it's always fun to visit "old friends" -- like the Blackstone Corridor. For several years Mark & I have surveyed the area from Worcester to Providence in an attempt to fill in lots of blanks regarding the birds in this area. One of the things I really like about this is it allows us to freely cross state boundaries without any real concern for our "Massachusetts" list (or our Rhode Island list for that matter.) 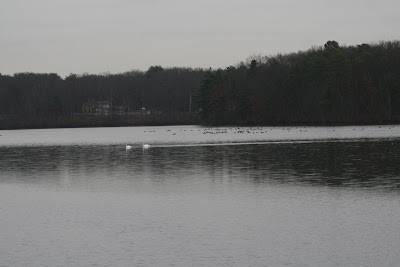 So on Saturday before any chance of snow could threaten us we decided to go to the Turner Reservoir on the border of Seekonk, MA and East Providence, RI and look for the almost-annual Tufted Duck. It was a gray, drizzly morning and when we arrived at the southern end of the reservoir it became clear that the large scaup flock was really off in the distance. We spotted the Tufted Duck through the scope and watched the entire flock move from RI into MA -- on the eastern side of the reservoir. 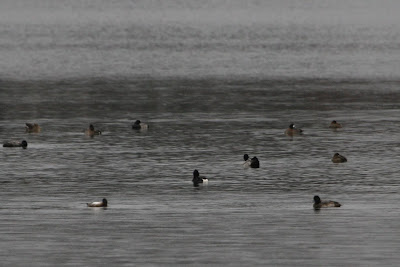 We decided to see if we could get the same bird in both states, so we drove around to the eastern side. We traveled south on Arcade Avenue (about 1/4 mile from the junction with Rt. 152 (Newman Avenue) and re-found the male Tufted Duck among the flock of scaup. In the gray morning light you were really able to pick the bird out simply by it's black back and very white sides. 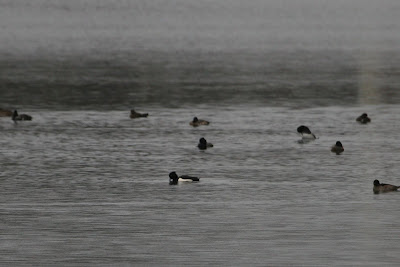 If you click to enlarge the photos, you can see the actual tuft....although it's not as long as I've seen in some other ducks. 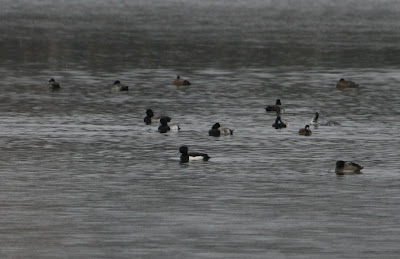 Always on the lookout for "lawn trinkets" Mark pointed out the caged demons at the edge of the driveway of the house right across from where we were standing. Don't you just wonder how some people decide what's the exact touch to add to their property to say "this is who we are"? 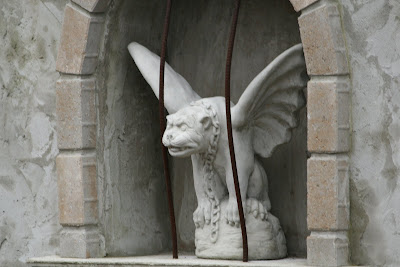 Since we wanted to get back to Worcester relatively early, we decided to drive up Rt. 1 (Newport Avenue) and check the Cumberland reservoirs out on the way home. After a quick drive through Slater Park in Pawtucket we continued on Newport Ave. and passed a number of office buildings -- it was the headquarters of Hasbro. Now we've passed some of their other facilities near the bike path along the Ten Mile River, but this was their headquarters.

And the reserved parking in their main lot was great. Each spot had an individual reserved sign with one of the colors and one of the pieces from Monopoly! 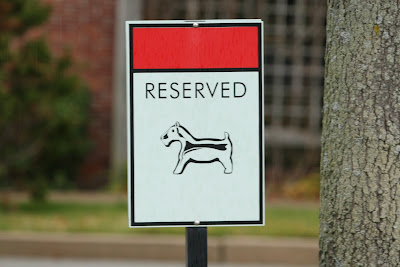 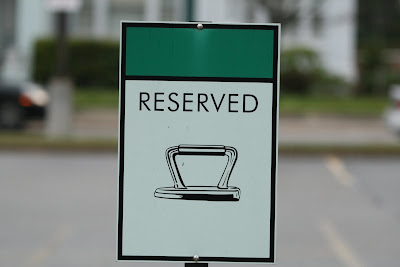 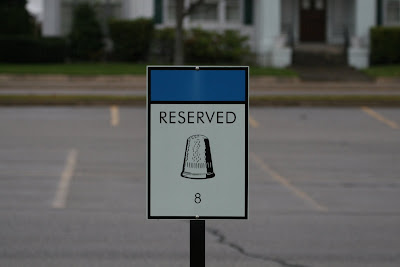 After driving around the empty lot to find the various pieces we each liked best, it was topped off by Mr. Potato-head near the front door of the building. I know the toy biz is a high-stress work environment, but come on, wouldn't you smile if this is what greeted you everyday you went to work? 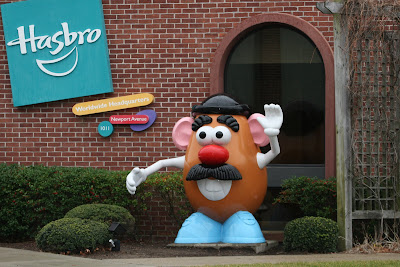 After a quick stop at the almost-devoid-of-birds Cumberland Reservoirs, we returned to Worcester to wait for the inevitable white stuff to arrive. When we got home, it was a real disappointment to learn that someone had spotted 6 White Pelicans in the Seekonk River, which is about 5 miles from where we were looking at the Tufted Duck!

And so on Sunday morning when we got up, it wasn't really a surprise to find ourselves in a "winter wonderland" -- although I have to say that Mark has definitely been choosing other phrases which most aptly describe how he's come to feel about winter. 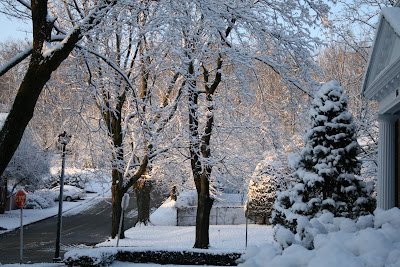 Since the roads were in good shape, we decided to head back down to Providence and check out the possibility -- remote as it was -- of finding the pelicans still in the area.

When we arrived at Swan Point Cemetery on the east side of Providence, we didn't have much at the various overlooks of the river. 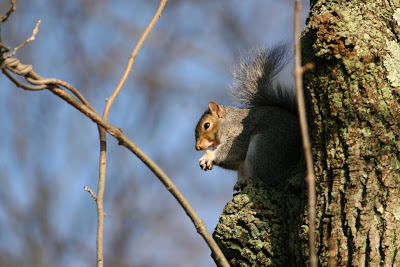 The cemetery was filled with Robins, though, and the birds were definitely focused on the puddles created by the snow/rain..... 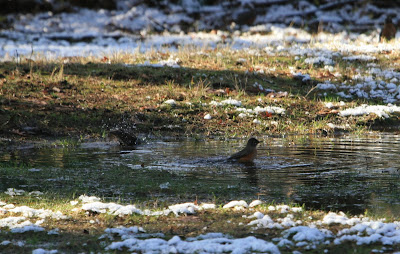 as well as the food which had been covered over by the wet snow. 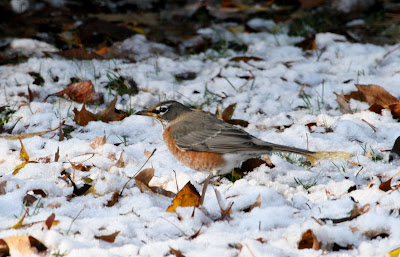 While we had 2 screech owls in the cemetery who responded to our calls, the place was fairly quiet.....and there certainly weren't any pelicans in the area. And we did all the usual stops at the southern end of the corridor, including all the stops along both sides of the Seekonk and a trip to Bold Point. We even went down to Watchemocket Cove -- all in vain. 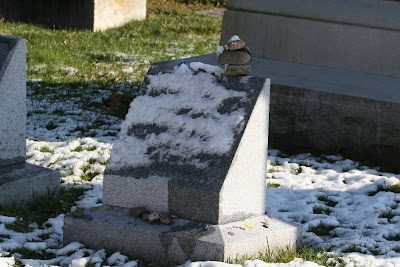 We did stop and check out H.P. Lovecraft's grave, since we had not really visited in the wintertime before.

With another relatively quiet birding day under our belts, we headed back to Worcester.