Mark & I took off Friday (the 24th) and headed down to the Cape to spend some time birding before leading the class trip on Saturday. We were scheduled to do a whale watch out of Provincetown on the Dolphin Fleet, but the winds were so strong we opted to bird the area from land. Since this class is about IBA's we knew we were still "legal" so to speak. Our first stop on Friday was Chatham Light where we had a fabulous jaeger and tern show. 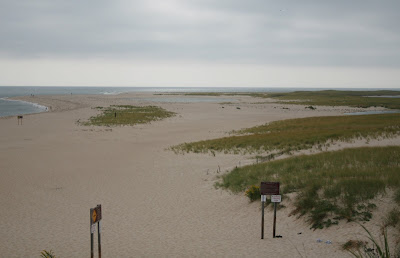 Things were too far out for photos, but we spent about 30 minutes with our scopes just enjoying the show. Unfortunately, the area was still hopping with tourists, so every 3-5 minutes people would stop to ask us if we were seeing any whales. So we decided to head up to the Nauset/Orleans area but we did stop at Cowyard Road in North Chatham and had a flock of about 18-20 Oystercatchers tucked in out of the wind on a sand bar. We weren't hitting the tides right, so our shorebirds were far off. We did have 2 Whimbrels fly at Chatham Light though. 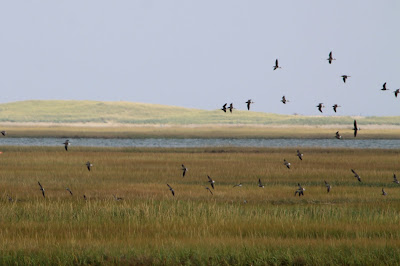 At Nauset Marsh we had flocks of Greater Yellowlegs and a couple of Forster's Terns in with the Commons. 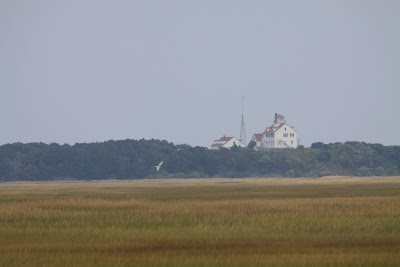 With the tides still high we wouldn't have seen much if some kayakers hadn't put them up. 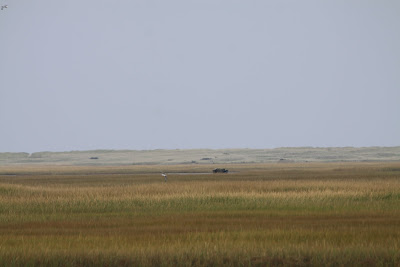 We had a few harriers and some good numbers of both Snowy and Great Egret. 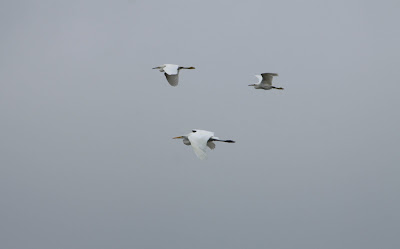 We knew we would be back to visit Hemenway Landing at dusk for the night heron show, so we decided to check out Coast Guard before checking into our motel. 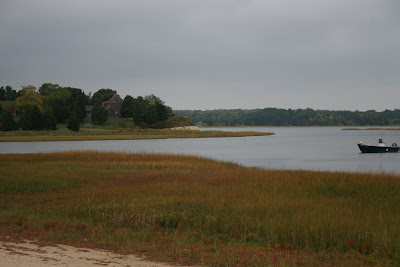 We were able to drive up and find a parking space, which was lucky for us since Mark found two different Dickcissels in a large flock of House Sparrows along the road just below the parking lot. We also ran into Alan Marble birding the area with a friend. 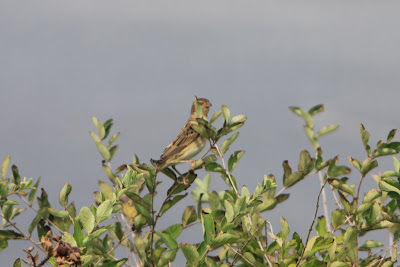 This one Dickcissel wouldn't let me get a good clean shot of his face....but the other one was much more obliging. 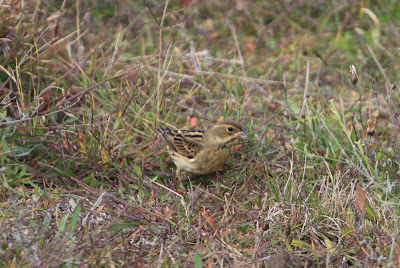 And much more colorful as well!

We checked in, had an early dinner at the Fairway Restaurant and then headed out to check out the night heron show. We were totally surprised to find about 20 other birders doing the same thing. The darker it got, the more birds finally flew out of their roost. We ended up with 9 different Yellow-crowns and at least double that for Black-crowns. Unfortunately, trying to photograph those birds when they're on a mission was next to impossible.

Saturday morning the winds were still blowing hard so when everyone assembled at MacMillan Wharf we decided to try out hand at pelagics from land. Based on the show the day before at Chatham we were hoping for something similar at Race Point or Herring Cove....and we would be on solid ground rather than holding onto the railings for dear life. 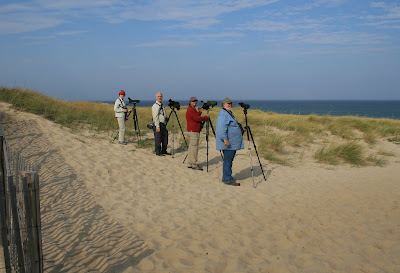 We did have a few whale sightings from Race Point and there were some Gannets fishing both there and later in the morning at Head of the Meadow. 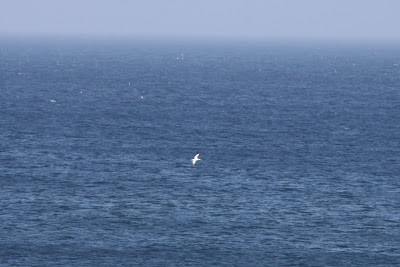 The plumages were highly variable in the birds we saw....ranging from almost full adult to very dark juvenile birds. 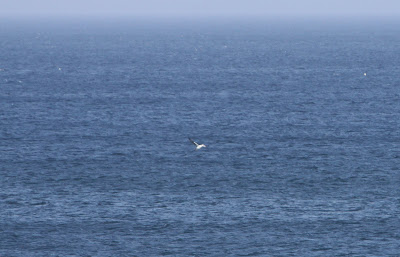 One of the highlights was getting the Sandhill Crane in the soccer field along Rt. 6 in Provincetown. 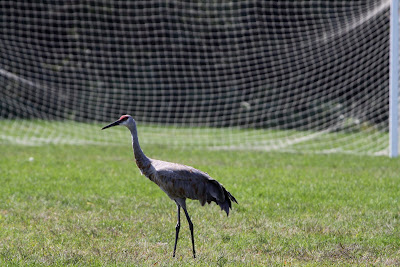 We had it on Friday afternoon and it was still there Saturday morning when we went to meet the class at the wharf. However, when we all came back and hour later, there was a girls soccer game in progress so we spent some time looking for it at the airport (but we dipped.) 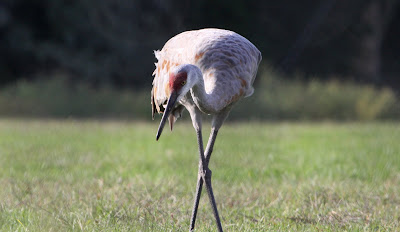 We made another attempt mid-morning, and sure enough the soccer game was over and the bird was back out on the field probing in the grass for grubs, worms and beetles. 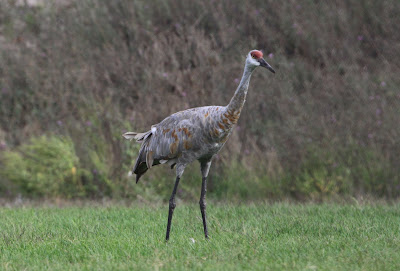 It was interesting the number of people that stopped right along Rt. 6 to ask what it was. I now have a good selection of Sandhill Crane photos in just about every posture....although I never got it in flight. 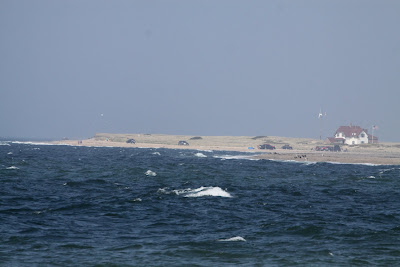 We hit Herring Cove hoping to see more jaegers and maybe even some shearwaters....and the winds seemed right. 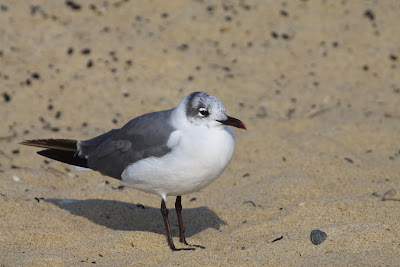 There were Laughing Gulls everywhere, although I never got one in flight which was a huge miss on my part. 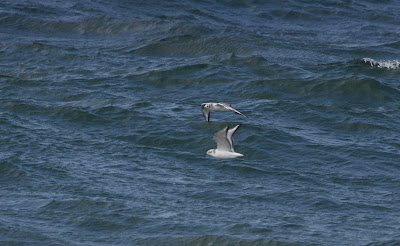 Although I made up for it with Bonaparte's Gulls! 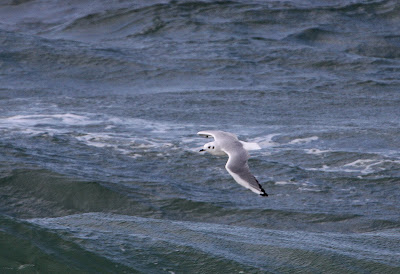 Sure enough there was a terrific tern and jaeger show right off the point. Most of the birds stayed just far enough out of camera range..... 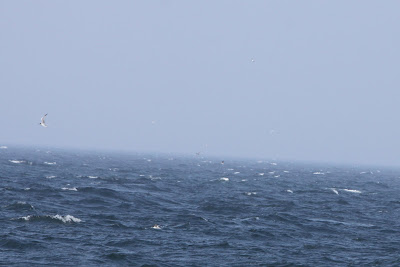 but 1 or 2 chasing terns came in close enough to allow me to get a shot or two.

As much as I would love "the" great photo, I really enjoyed watching them harass the terns. I felt like I really learned how to identify this species and will, hopefully, be in a better position in the future. Most went down as jaeger species, but we did have a couple of identifiable Parasitic and Pomarines. 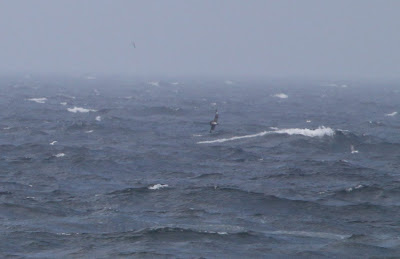 As we headed out of Provincetown we decided to check out High Head and see if we could luck out and find a Western Kingbird or something. This is part of the area we do on the Truro Christmas Count, so it was fun to be there when the summer residents were still keeping their feeders filled.

As we came up the hill we were dismayed to find Juncos though! Oh no, these are probably some of the same birds we'll see in a few months on the Christmas Count. We also had some immature White-crowned Sparrows as well. After making the loop on the sandy roads, we stopped to check the feeders again and Mark spotted a Lark Sparrow! 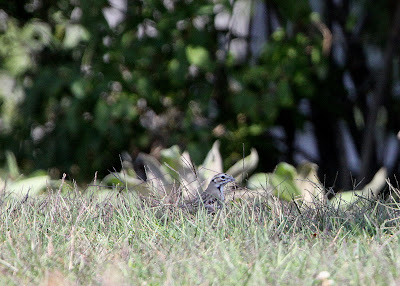 This little bird gave me such a hard time though. Part of it is the little mouse-like nature of the bird, but part of it was also my height. Everyone was just a bit taller (okay a lot taller) and they kept seeing it pop it's head up. 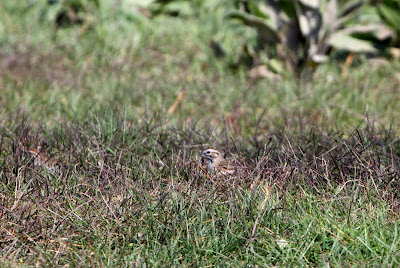 Finally in desperation, I opened the sun roof on my vehicle and stood up to gain the necessary height! It was amazing to watch this bird literally disappear for minutes at a time and then reappear in a different part of the lawn. I have some photos where the bird is so well-hidden that all you can see is a piece of the face and his eye. It's like a "Where's Waldo" puzzle. 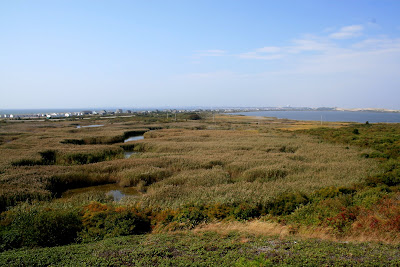 We left High Head and began heading off the Cape. We did make another try for the Dickcissels at Coast Guard, but being a Saturday they weren't allowing any private cars up until after 5 and the Shuttle Bus didn't seem like a good option for us at this point.

We checked in at the "stump dump" in Nauset, but being mid-afternoon anything that had been there was gone....so we said out goodbyes to the class and headed back to Worcester.
I don't think I've had a trip where jaegers, Sandhill Crane, Lark Sparrow and Dickcissel all show up on the same day. It had been a great trip!