So anyone who knows us will know that Halloween is one of Mark's and my favorite holidays. We get on average between 300-400 trick-or-treaters every year! In fact the street in front of our house is usually jam-packed with cars & vans as parents "bus" their kids in. Plus our proximity to WPI adds that older nerd element. This all happens within a very tight 2-1/2 hour period. Now in addition to the usual snack-size Milkway or Skittles, we also give out weird little toys...monster finger puppets for the younger kids, and something like glow-in-the-dark super bounce eyeballs for the older kids (and this sometimes includes the parents!) Anyway my point being that we love Halloween! So I thought I would share some of my more unusual photos just to celebrate the occasion...... 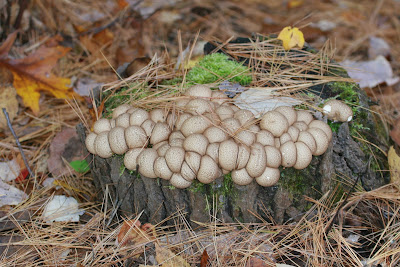 While I've gotten lots of shots of puffballs before, a few weeks ago we came across this rather unusual conglomeration on a decayed tree trunk. Sort of looks like a brain..... 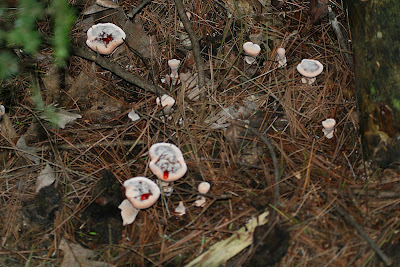 And then there were the mushrooms that oozed blood! Out near Tom Swamp in Petersham we discovered this group of mushrooms that looked like they had drops of blood oozing out of them as they started to decay.... 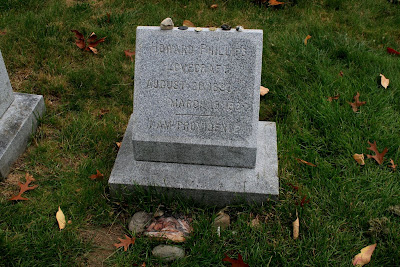 And then of course there's the grave of H. P. Lovecraft in Swan Point Cemetary in Providence. H. P. Lovecraft is an author who wrote really weird fiction/science fiction in the early 1900's and is associated with names like "Cthulhu" and the Necronomicon. (I've included a link to a website where you can learn more about him and his works, if you want http://www.hplovecraft.com/)

So let me tell you about our experiences with his gravesite. When we first learned he was buried at Swan Point we set out to find WHERE. I found a picture of his family plot which was a large pillar with the family name PHILLIPS engraved (that's what the P. stands for -- Howard Phillps Lovecraft.) So whenever we were birding in Swan Point we would drive around and check out as many pillars as we could looking for the Phillips name. Finally about 5 years ago we found it! And we weren't disappointed. Although the grave itself is rather unremarkable the inscription (I Am Providence) let us know we were in the right place, along with the different "momentos" that people left. There were always weird coins or black roses or plastic monsters....you get the idea. So of course we left one of our Halloween give-aways (it was a monster PEZ dispenser -- very cool)
And then there's the goth kids....if you go the week or so before Halloween you'll inevitably run into 2-3 teenagers (black clothes, black nail polish, etc.) wandering around Swan Point looking for H.P. Lovecraft's grave. So we usually stop and offer to show them where it is! Now realize that we do look like someone's grandparents (which we are) and we have all our birding gear in the car, so these kids are never quite sure....but Mark usually puts them at ease!
Now whenever we take a birding class to the Blackstone Corridor we usually end of doing various spots in Providence at the southern end and will end up at Swan Point Cemetary. So we have to take a tour and point out the grave. (BTW, we were then once just 2 days before Halloween and we were surprised to find the area around Lovecraft's grave to be surrounded by large spotlights on high poles with motion detectors! We could only assume that the cemetary wanted to be sure no one was doing any ritualistic Halloween sacrifices there.)
Anyway, as I was saying we usually take our birding class there. So 2 weeks ago we were finishing up a trip to the Blackstone IBA and stopped by Swan Point. When we got to Lovecraft's grave we found the usual things -- coins, flowers, a two-headed rubber dog. As we got up close to the grave there was a terrible smell (definitely like rotting meat)...and then we spotted this weird thing. If you enlarge the photo you'll see it's totally weird. In fact everyone on the trip thought it was disturbing and no one wanted to hang around long. But I stayed long enough to get a couple of shots and have no idea what we were looking at....some thought it was a dead animal that had been sacrificed and then sort of melted together and left as a "tribute". But no one really knows???? 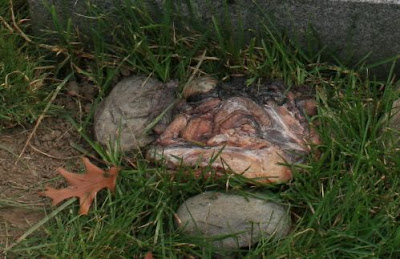 Anyway, have a Happy Halloween!

Posted by Sheila Carroll at 6:10 AM