This year I decided to try to document the 5 Christmas Bird Counts that we do. Our first one was yesterday, and it's the one we've been doing the longest (over 20 years) and it's also one of the longest-standing ones on record...over 100 years! I've had the opportunity to look at the historical records and it's fascinating to see the changes. We are the sector leaders for the Gloucester/Eastern Point section of the Cape Ann CBC. We've subdivided our section and usually Simon Hennin and John Liller do a segment, but this year Simon was unable to do it due to the ice storm and power problems. So John was joined by his wife, Kim Kastner, and Kevin Bourinot. The area Mark & I do is from the Gloucester Fisherman's statue to the tip of Eastern Point. And John and his team do the area along Atlantic Avenue, including Bass Rocks and out to the Rockport line, including Good Harbor Beach and Salt Island. 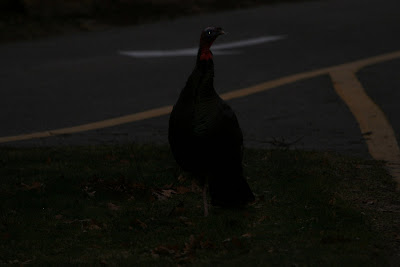 We usually stay up there overnight, so we can get up and owl. But the last two years we've driven up very early so that we can give Gremlin his meds before we leave. It makes for a very long day....but a fun one. Yesterday as we were owling we had a turkey start calling from the middle of the road out on Eastern Point. It's strange to see turkeys so far out near the ocean, but this is the 3rd or 4th year that we've had them there. 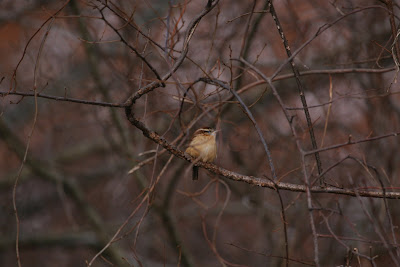 Also calling in the just-dawn light were several Carolina Wren and Hermit Thrush. In fact, we don't always get Hermit Thrush on our section of the count, so to get 11 for the day was really quite exciting. 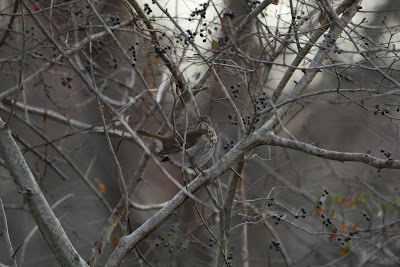 As dawn broke we were out on the tip of Eastern Point at the Coast Guard station and the morning was perfect. If you click on this photo you can see that we were able to view Boston in the early morning light! 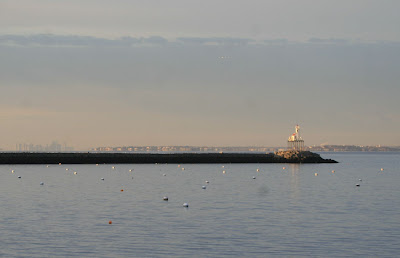 The view over to Hammond Castle in the early light was beautiful as well and definitely made you feel like you were someplace other than Massachusetts in December. 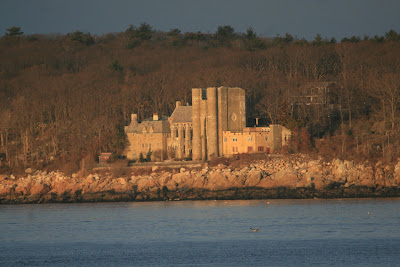 We checked a number of fishing boats as they came into the harbor...looking for strange gulls. You have to realize that the Gloucester count is THE GULL count (at least for us). This year we spent extra time on Eastern Point looking for the Thayer's Gulls that had been reported, plus hoping for something even more exotic like a Slaty-backed Gull. We did get at least 2 first winter birds, but nothing close enough for me to photograph. 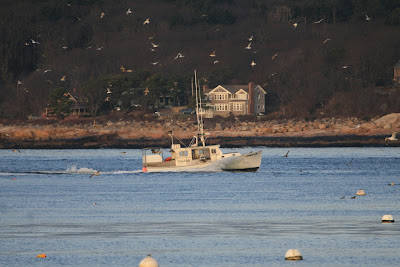 The ducks are another highlight, and these Common Eider were in absolute pristine plumage and some of the males were even displaying. 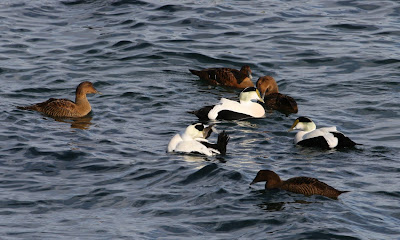 But the gulls were definitely the show. This shot of Niles Pond gives you an idea of the patience you have to exhibit in order to find just that one unusual gull.... 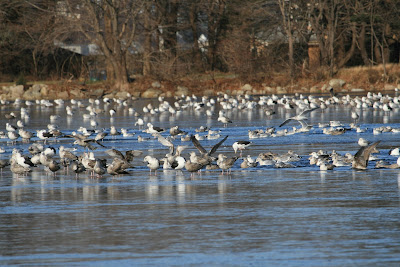 Luckily, this Glaucous Gull was standing off by himself, so it wasn't too hard to distinguish him. So I left Mark pouring over the gull flock on Niles and walked the roads hoping to find some lingering landbird who wanted her photo taken. I did have a winter wren, but not one willing to pose for me. 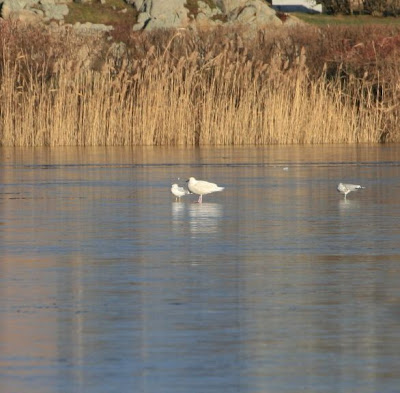 This immature Black-crowned Night Heron was more obliging. Of course, that's probably because he wasn't going anywhere until the pond opened up a bit. We've had BCNH on the count before, but it is not normally to be expected. At first I get so excited because it's an unusual find....then I think about the poor bird and hope he finds an open marsh with enough food to sustain him for the winter or at least give him the energy to get a little further south. 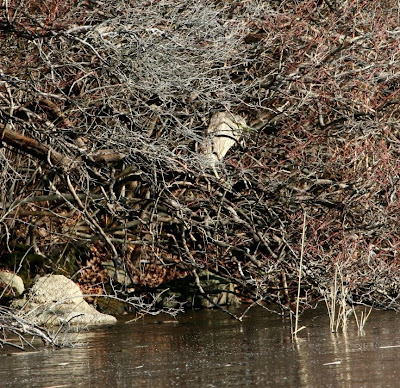 Before we left Eastern Point and headed over to the fish pier, we found a Yellow-breasted Chat hopping on someone's driveway right in front of an open garage door! Mark thought for sure the bird was going to hop in, but there were so many thickets in the area the bird disappeared deep in the tangles....and wouldn't reappear for a photo. We checked back several times throughout the morning but couldn't bring him out. 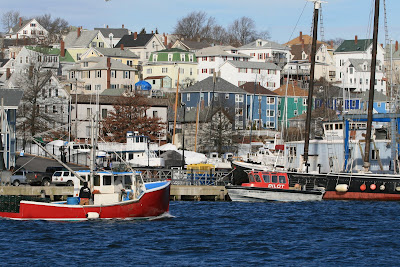 Things were a little quiet at the Jodrey fish pier, even as some of the boats came in. Most of the gulls seemed to drop off nearer to the Eastern Point jetty, so after checking the various roofs for roosting gulls, and of course the clock tower for the resident Peregrine, we headed off to finish up at Rocky Neck before meeting John's team for lunch. BTW we did get the Peregrine twice...once buzzing the shore along Eastern Point and then later sitting on the far side of the clock tower. 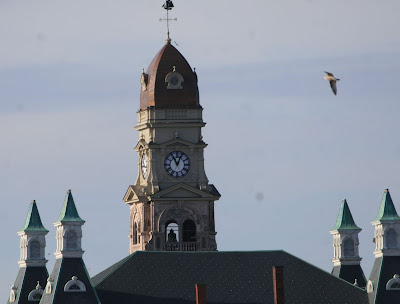 We always check from Rocky Neck for two key birds -- the Eared Grebe and Barrow's Goldeneye. Neither bird could be found this year. The grebe hasn't been reported by anyone so far, so it's possible that this bird has now passed on and a yearly Eared Grebe for Massachusetts' birders can no longer be counted on. 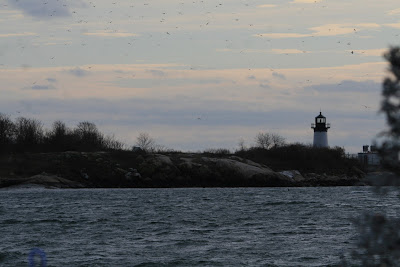 One of the best places on Rocky Neck to look for the Barrow's is at the end of Fremont Street looking out at Ten Pound Island. This was one of the favorite haunts of the Gloucester Sea Serpent who supposedly visited Cape Ann and made appearances for several summers in the early 1800's. While I often hope to see a sea serpent on 10 Pound Is., I often settle for numbers of ducks, usually lots of Goldeneye with a Barrow's among them. This year there was nothing there. Maybe because the count is earlier than ususal, but the Goldeneye seemed somewhat lacking. We had very few; and even when we added John's numbers with ours, there was only a total of 36 in our section of the count circle. 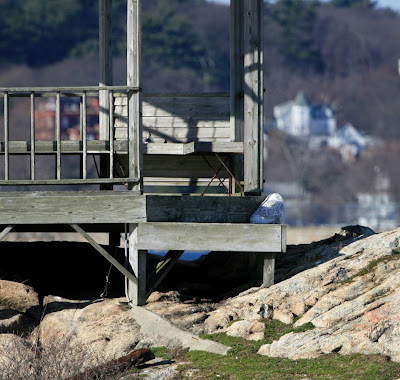 We did, however, have a Snowy Owl. We had also heard that one had been visiting the beach at Rocky Neck periodically and were delighted when we found her at the end of Fremont Street tucked up on one of the stairs to the gazeebo behind some condos. She seemed to staying out of the wind that had kicked up and was quite content. Several hours later John & Kim had her sitting in the same spot when they stopped to check on her before leaving Cape Ann. 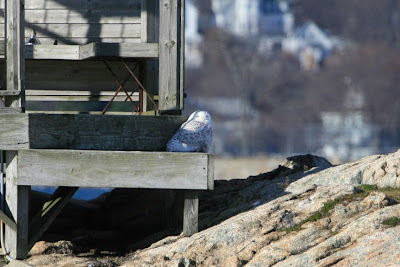 The gazeebo is actually on the other side of this old paint factory which is one of the great landmarks as boats pass into the inner harbor or the Jodrey fish pier. 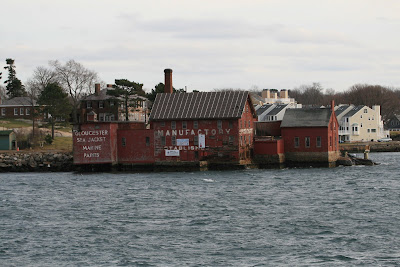 One of the other most fascinating landmarks as you leave Eastern Point is this "homage to toys". I don't really know what to call it, but in the 30+ years that we've been going to Cape Ann, this outdoor "shrine" has always intrigued me. Is it someone's work of art? A tribute to a lost child? Or just a crazy person's side yard? I don't know....and I'm not sure I really want to. But this time I decided to photograph it for posterity! 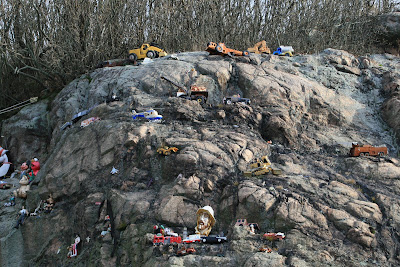 After meeting the other team for lunch we decided to check out the road around Bass Rocks to see if we could find the King Eider that John's team had found. 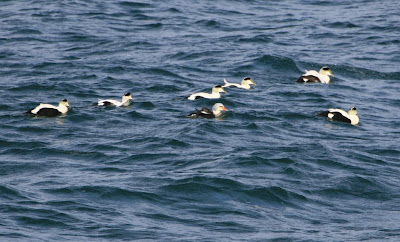 Often this bird is found right along Atlantic Avenue (near the Elks club) but this year they seem to be hanging out just to the left of Bass Rocks. 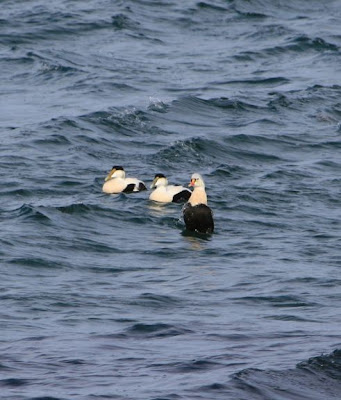 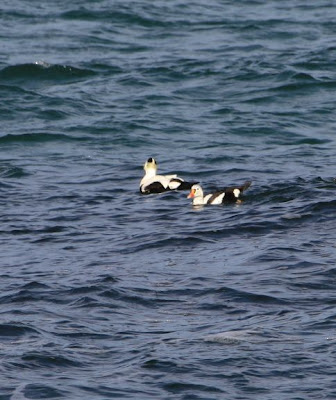 As we mapped out our strategy for finishing up the day, I wanted a shot of the famous Fisherman's Memorial (which existed before "The Perfect Storm" and the logo on Gorton's fish packages!) This monument was created in 1925 to memorialize the hundreds of fishermen lost at sea between 1623-1923 and commemorate Gloucester's long-standing link to the sea. It was odd to watch a mother pose her 3 small daughters in Christmas garb (obviously for a card) in front of this statue which has such a solemn representation. 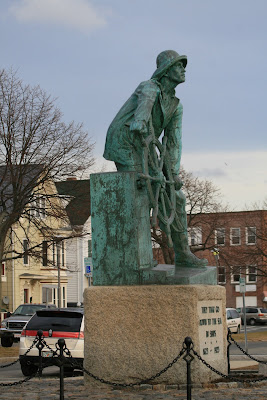 We spent mid-afternoon poking into the various fish piers in downtown Gloucester and "mopping up" lots of rock pigeons, starlings.......and of course House Sparrows. We had this flock of well over a hundred behind the high school and we tried (in vain) to find a Dickcissel among the birds. 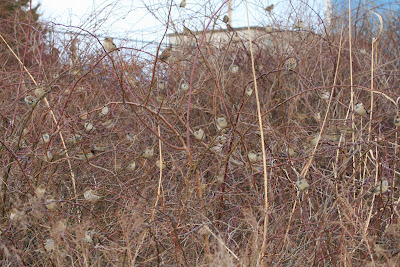 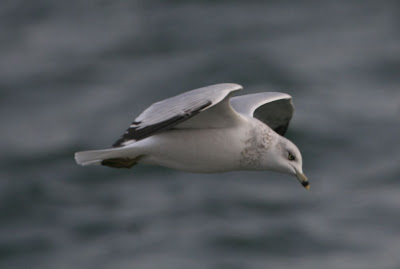