We did our fifth and final Christmas Bird Count of the season this past Monday, and it was an exquisite end to the CBC season. I almost felt like the Truro count and the Cape Ann count were bookends -- each taking place at the ocean, with good birds, weather and friends. Of course the 3 counts in between had their own unique highs and lows. But the Truro count is always fun. Part of it has to do with our territory. We have a relatively small area from Pilgrim Lake down the Cape to the Truro elementary school. And we further subdivide the territory with Simon Hennin taking the bay side and we do the ocean side...Rt. 6 is the dividing line. We usually have to go down to the Cape the night before if we hope to get any owling in, so a group of us meet at the Fairway Restaurant in Eastham for dinner the night before the count. Here's a photo of some of the gang from Central Mass who do the count. This year one of our major CBCers, Kathy Mills, wasn't able to join us, but she did call us at the restaurant to wish us well! 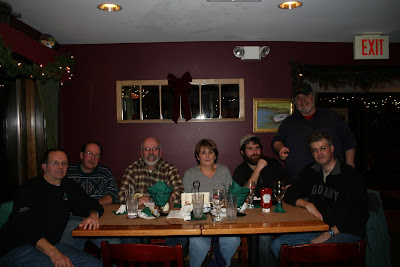 Now you might be wondering why I would put a blank photo on the blog...but it isn't. We were out owling at Pilgrim Heights and noticed that there were Robins everywhere on the road in the dark. If you click on the photo to enlarge it (and view it with the room lights off) you will notice the "blue dots" are really the Robins' eyes reflecting the carlights. It was dark, yet these birds were everywhere....portending what was to be the most numerous bird of the day. 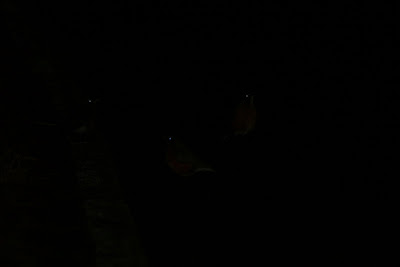 As dawn broke over the tip of the Cape, we were looking (in vain) for Short-eared Owl up on High Head. 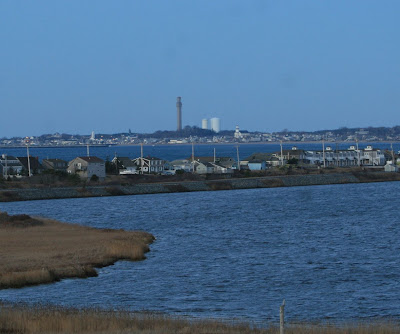 We got a great look down into the marsh and found a Pied-billed Grebe sticking very close to the reeds. We also heard both Virginia and Sora rails in this marsh. 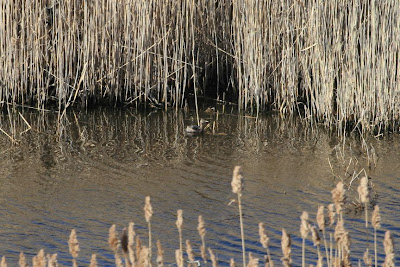 We decided to get to Head of the Meadow beach so we wouldn't miss any possible alcid show taking place at dawn. A few years back we were treated with 15,000+ Razorbills on the count, and I think we've become jaded since then -- always hoping for the big numbers. 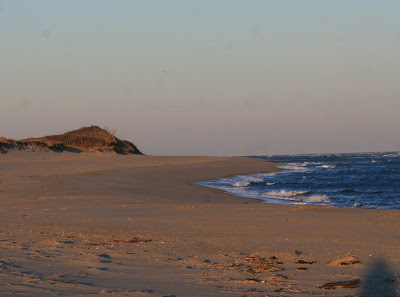 Most of the birds were quite a ways out and the closer fly-bys were mostly Red-breasted Mergansers, with a few White-winged Scoters passing fairly close as well. 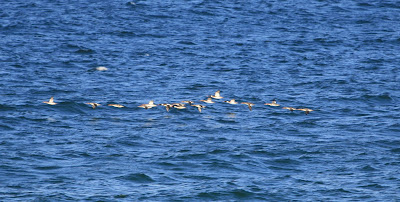 We were treated to great looks at Gannet and Kittiwake, though, feeding just off the drop-off. We spent almost 2 hours checking everything that was flying by. Mark spotted a shearwater way out (he think's it was a Cory's but wasn't 100% certain so it went down as "shearwater sp.") 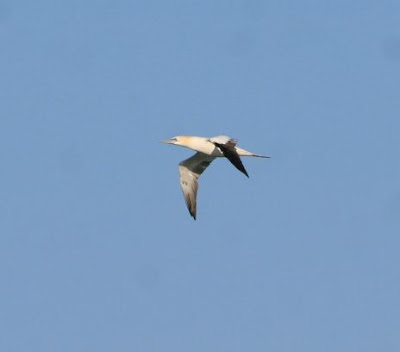 There were numbers of Razorbills, a few Dovekies, Murres and even a Puffin...but as many as we were able to identify, there were at least that many more that went down as LUA's (large unidentified alcids). However, there was a great show of Red-throated Loons passing fairly close to shore. 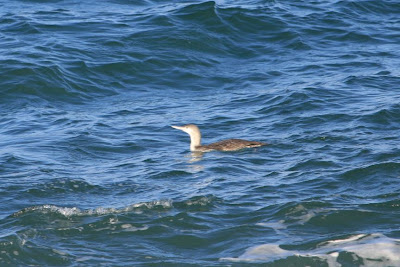 As the sun came up we had huge numbers of Robins flying over. Our count for the day was somewhere between 7,000-8,000 birds. You really have to wonder where they all go once they hit Provincetown. Do they just turn around and head back....or fly out over to the mainland? We were torn between the seawatching and knowing that there were probably large flocks of passerines along the Bike Path....

So we headed back up to the beginning of the bike path at High Head. 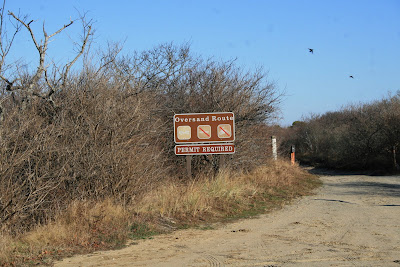 We weren't disappointed...there were hundreds of Robins everywhere. I decided to hike a bit down the bike path itself and Mark planned to stay close to the car and count birds as they flew over. (Secretly I knew he was looking for that one Varied Thrush amongst the thousands of Robins.) 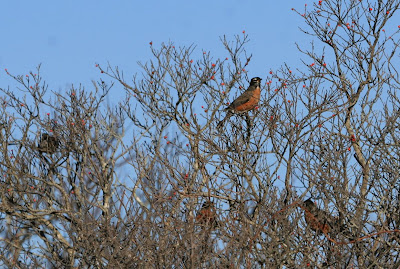 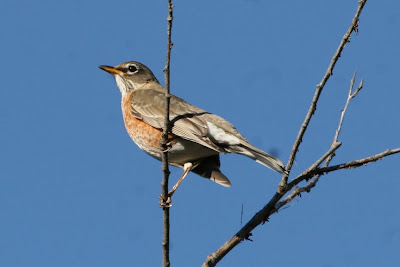 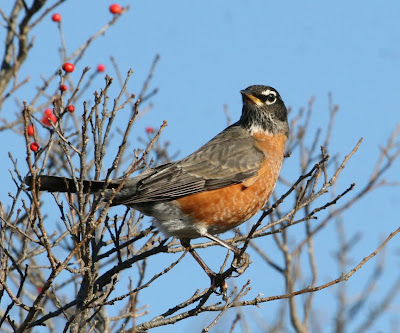 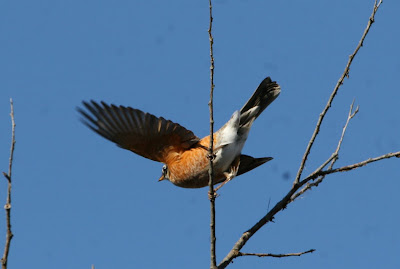 Even a Harrier couldn't flush all the birds that were along the bike path. Notice how well this bird blends into the surrounding dune grasses. 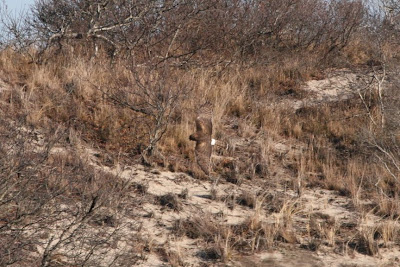 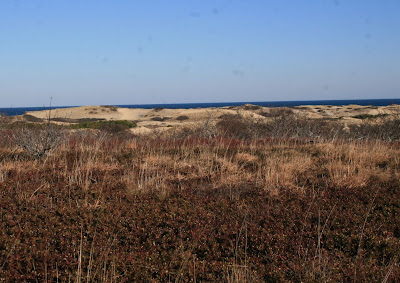 And there were also very good numbers of Yellow-rumped Warblers. 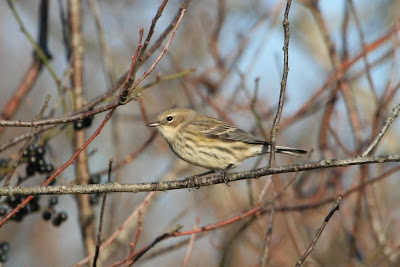 While we hoped to find a possible Palm or Pine....no luck. Just lots of Yellow-rumps. 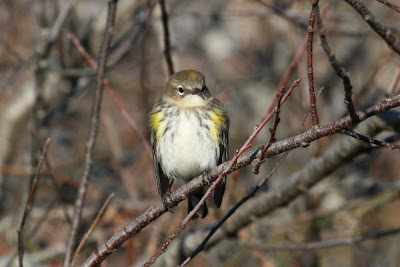 We were excited to find a Northern Shrike up there, perched way out in a tree....and hoped that he wasn't feasting on the Yellow-rumps. 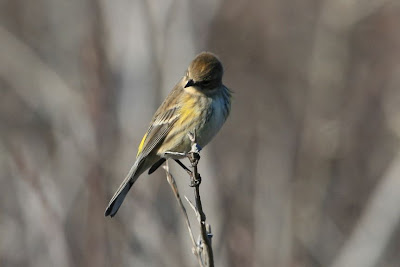 Before we headed off to meet Simon for sandwiches and to get his numbers from the bay side, we drove along this little dirt road through a magical little forest with lots of pines. We had heard both White-winged Crossbills and Pine Siskins at dawn and hoped we would come across them in the pines. 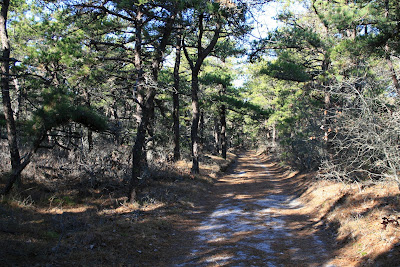 We didn't. Sometimes this forest tract is dead, so I was grumbling about "wasting time" driving through. But we did come across a small group of chickadees, titmice and Red-breated Nuthatches. 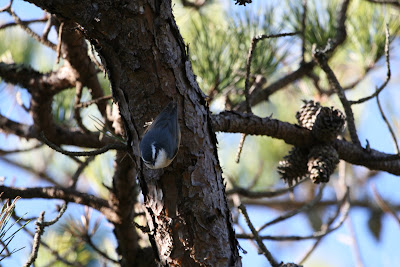 Since we don't always have this species on the count in big numbers, finding any justified the side trip! 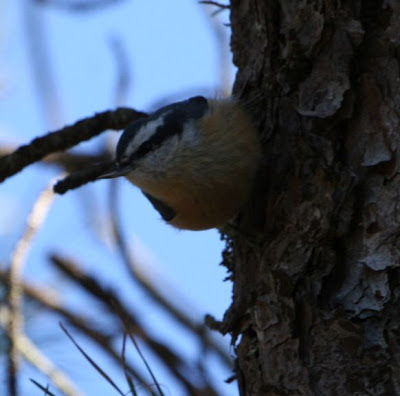 After lunch we birded the area around Highland Light and the old radar station. Not many birds on the golf course...mainly because there were a smattering of golfers out enjoying the mid-40 degree day. 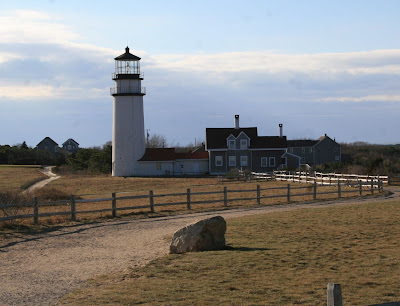 We did manage to coax a pair of Carolina Wren out of the bushes, along with our only Mockingbird of the day. 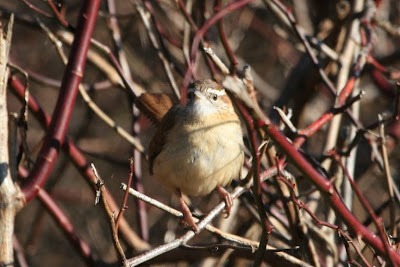 We drove to the small overlook at the end of the road and put in some more time seawatching. 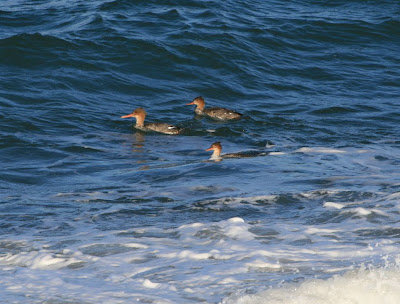 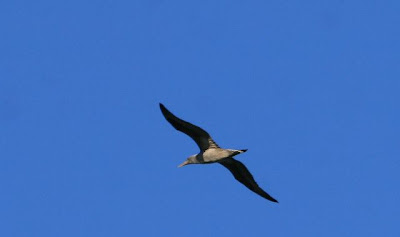 Along with Northern Gannets -- although the numbers had dropped off significantly from the early morning. 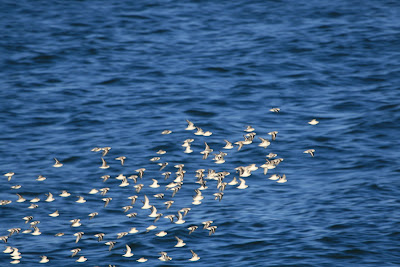 We did have a nice flock of Sanderling come wheeling by.... 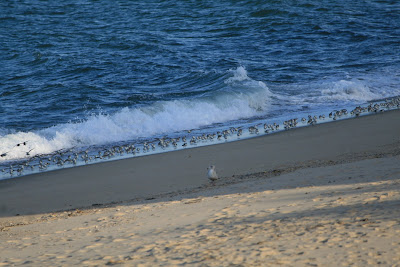 and when they landed down the beach we counted more than 80 birds in the flock! 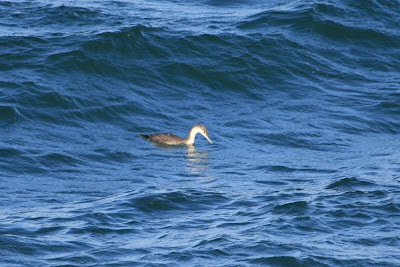 And the Red-throated Loons continued to sail by very close to shore. 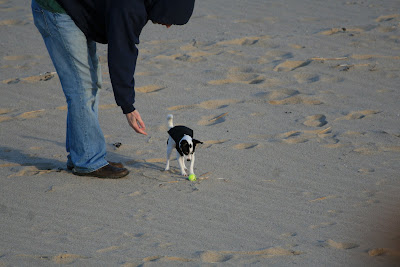 The beach was almost deserted (except for this adorable little dog and his owner) so we stayed at the overlook and started to tally our numbers. In our little sector we had 68 species, including 5 species of alcids. When I think of this count the things I'll remember most were the constant flocks of Robins flying over, incredibily close Red-throated Loons, close Dovekies and the early morning Gannet and Kittiwake show!

So ends the saga of the 2008 Christmas Bird Count season. Definitely a mixed bag. But one thing that can be said about Christmas Bird counts (no matter what the weather or the ultimate species total) it's better to be out birding and enjoying nature than not. And this is a good way to make sure you don't hole up and become a couch potato for the winter.....Now onto 2009!