So, after doing the Cape Ann CBC, we were definitely concerned about our first inland count. Especially with a lot of Worcester County still suffering from the ice storm....and some of our sector leaders still without heat and electricity. And we weren't sure what the storm had done to the birds! We had scouted out some areas last weekend and found some good samplings of landbirds, but as anyone who does a CBC knows -- 3 days can be a long time from scouting to actually doing the count. It didn't help that we started out in somewhat windy, drizzly weather....not usually your best bet for pre-dawn owling. While numbers were down we did manage a pair of Barred, as well as a Saw-whet and 3-4 Great Horned owls. 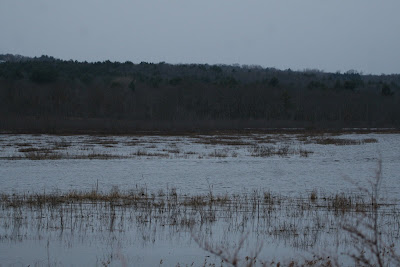 Just at dawn we started at the very flooded Quabog River crossing. While there was lots of water....there were no birds. I think we had 3 Mallards fly across and land in the marsh. Not an auspicious start to the day! So we headed to West Brookfield to check out Lake Wickabog. 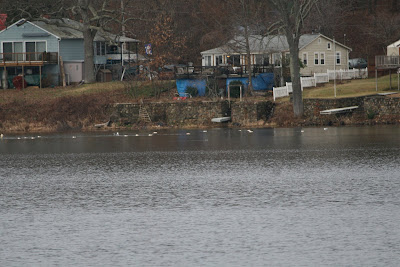 Here, at least, we had our first real sightings....good numbers of Common Mergs were still present, along with Canada Geese. We were very excited to find a Horned Grebe tooling along the pond -- not often found on this CBC. It's only been recorded 4 times in the 13 years since the Sturbridge count was started.

However, there are usually good numbers of Hooded Mergs. 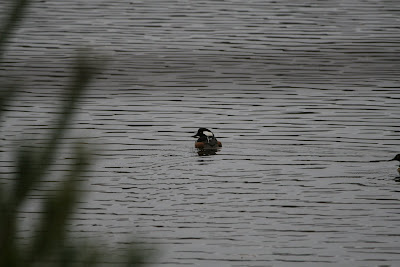 One of the first silly photos of the day (and there will be many) was of this White Stork at Wickabog. Luckily we had seen this "bird" earlier in the season, otherwise we would have been freaked. This isn't your usual plastic-flamingo-type fake -- this is a classy fake. In fact you could convince some poor unsuspecting non-birder (and maybe 1 or 2 birders I know) that this is the real thing. Of course after watching it for hours and not seeing it move, even the most trusting soul would catch on. 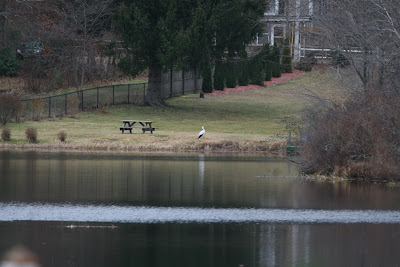 Since many of the fields and farmland were flooded, we had gulls in places we don't normally have them. This Ring-billed Gull actually seemed to be posing for the camera when we drove by on our way to the southern end of the territory. 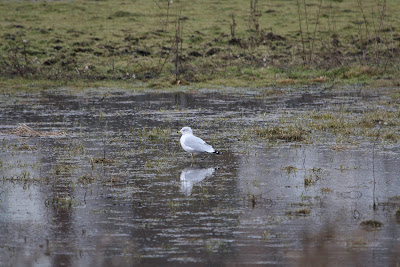 As we headed south, we stopped by Comins Pond in Warren to see if there were any ducks on the pond. This is always a weird stop for us, since we're actually standing on the spot where 17-year old lifeguard, Molly Bish, was kidnapped from about 8 years ago. Although her remains were finally found three years later, it's still one of the areas great unsolved mysteries.

Since there was absolutely nothing on the pond, we didn't linger long at all. 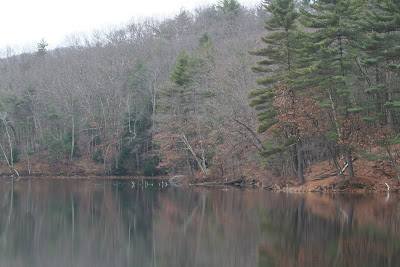 We did have a small group of Chickadees in the area, but, alas, nothing unusual was traveling with them. 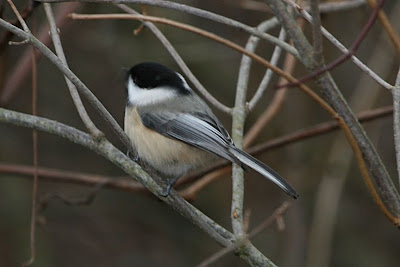 When we hit the big marsh at the southern end of our count area, we were surprised by a group of about 100 Red-winged Blackbirds foraging in the marsh grass. We usually stand with fingers crossed hoping to get 1-2 putting up at dawn at the Quabog marshes, but a group this large was quite unusual. They were all in the same immature, female-type plumage and disappeared as quickly into the grasses as they had appeared. 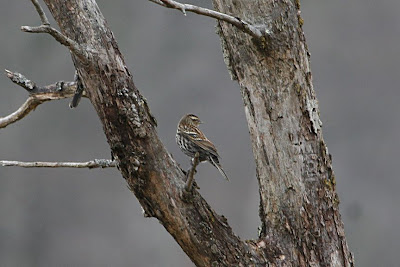 There were also good number of Tree Sparrows and Song Sparrows in the marsh grasses too. 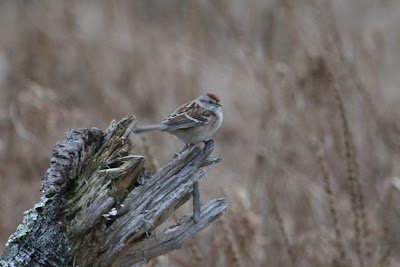 Stopping by one of our usual spots for Turkeys didn't disappoint. These birds are so regular at this spot, we're wondering when we'll have to start counting them as domestic farm animals. 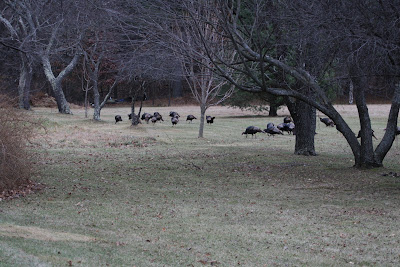 Speaking of domestic farm animals, on our way back to West Brookfield to meet our friend, Val Miller, to bird the afternoon together, we stopped by for a quick "visit" to one of Mark's favorite domestic animals (the other is the goat). This huge sow was outside, but the babies were running around just inside the barn. The farmer invited us in to see them, but since we were doing a CBC we had to ask for a raincheck. 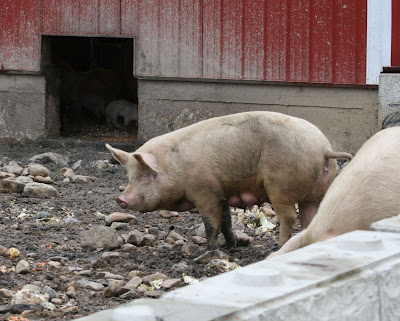 Since right down the road was one of my favorite domestic animals, we made a slight detour so I could get a photo of the miniature horses in their winter coats. Now I think I have enough photos of these guys to do a seasonal calendar! 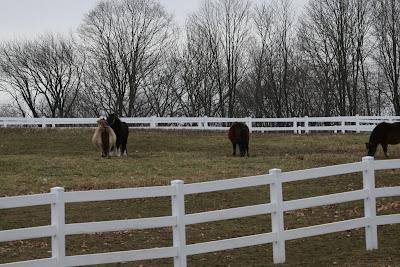 We finally met Val at Subway before heading off to finish up our circles in the afternoon. As you can tell, Val doesn't enjoy having her photo taken..... 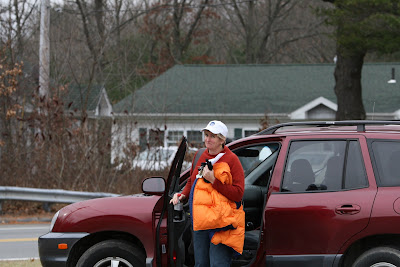 ...although she was oblivious to my camera when we came across these burros who had "escaped" and came running to see us when we stopped the car. They were so friendly that, much to Mark's chagrin, I jumped out and joined Val at this "petting zoo". Once the big, fat orange tabby barn cat joined us I knew we had to get moving. 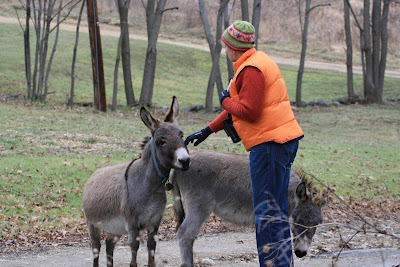 But it proved to be a good bird stop as well, since in the field next to the car we had 2 flickers and a large group of white-throats and juncos feeding on the ground. 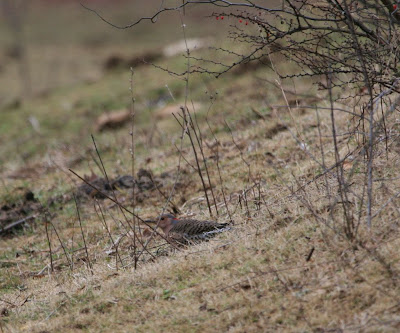 As we drove through the apple orchards and farmlands in the southeast part of our circle we wondered whether this farmer was making a political statement or just advertising his own name. While we figured it was the latter, it was fun to speculate that he was going to set these trees on fire as a farewell to this administration! 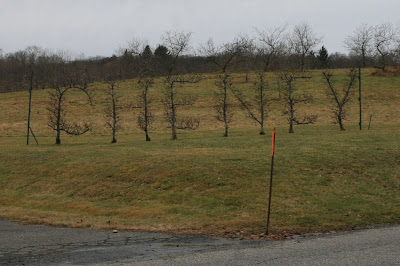 We continued to turn up small pockets of landbirds (like this White-throated Sparrow) but nothing terribly exciting put in an appearance. 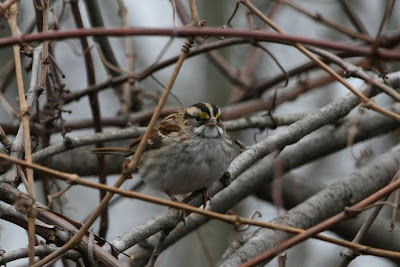 Finally, after tallying each of our sections, the 3 of us headed off to The Bird Store and More (in Sturbridge) for the compilation. Here's part of the crew enjoying pizza after the final tallying for the day was done. 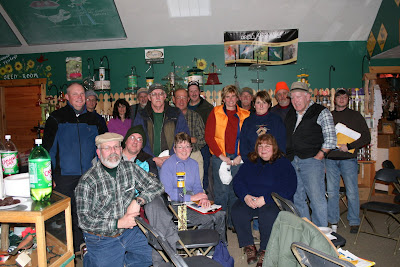 We recorded 69 species on the whole count for the day. Not our lowest number -- but rather ho-hum in general. Now it's on to the Worcester count this Saturday, although with a foot of snow forecasted starting Friday afternoon, who knows if the count will even come off. Now I know why most birds (and lots of older people) head south in winter!