Our first bird of the year (really truly) was this Cooper's Hawk sitting in our backyard waiting to nail a pigeon. I didn't think I could get a shot through the glass but Mark convinced me to try. And I'm glad I did -- an auspicious start to 2009. 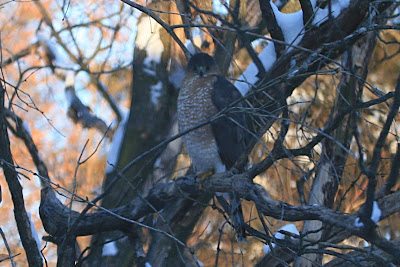 We spent the 1st staying in Worcester (and nearby towns) checking to see what was around. We started at Lake Quinsigamond in search of the female Barrow's Goldeneye which had been found recently, but most places were pretty frozen. We finally found her in a large flock of Common Goldeneye tucked in the southwest corner of the lake off a small deadend road. The two Long-tailed Ducks were also in the same area. We decided to see what other waterfowl we could turn up. A stop by Wachusett Reservior didn't yield much in the way of photography but we did have a female Canvasback from the Rt. 110 side in that first cove where the dike begins. It was hanging around with a large flock of Hooded Mergs and a few (4) Ring-necked Ducks. Elsewhere on the res pickings were pretty slim, although we did have a flock of Common Mergansers in South Bay. 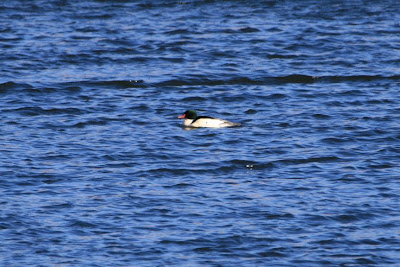 Still in search of ducks we stopped by that favorite watering hole of Mallards in winter -- Tatnuck Brook. It's definitely a bizarre sight seeing 100+ ducks packed into a very small area. 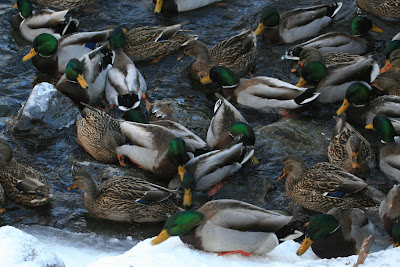 A stop by Worcester Airport after lunch didn't produce the hoped-for Snowy Owl or Rough-legged Hawk...in fact it didn't produce much of anything. In the industrial park on the back side of the airport we managed to bring out a few landbirds, but that was about it. 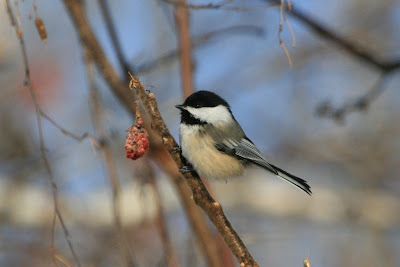 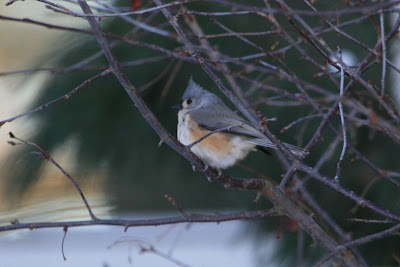 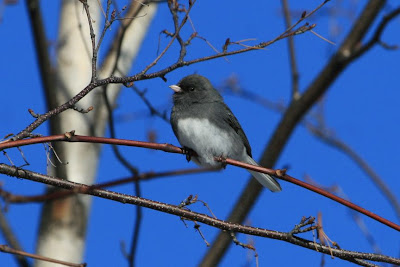 So we headed off to the cemetaries (Notre Dame and All Faith's) out past Webster Square. It was very disappointing to find All Faith's (aka the new Swedish Cemetary) almost totally frozen. I think we had two Mute Swans and a pair of Hoodies. So we headed over to Notre Dame to check the river. The marsh at the back side of the cemetary produced another good batch of Mallards, Canada Geese and Hooded Mergs. 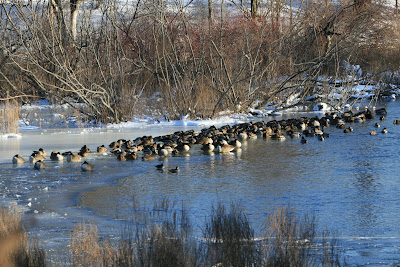 Since the water's kept somewhat open by the fast-moving brook, we could enjoy the birds swimming past at fairly close distances. It was interesting to see the Hooded Mergs already in pairs and males displaying. 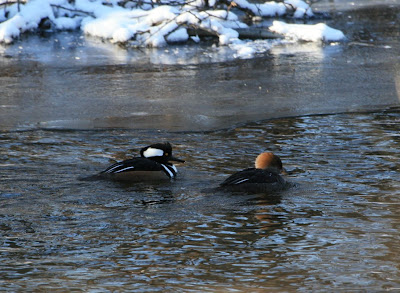 One of the highlight "sightings" for the day was Rick Walker in Notre Dame. He went down on our list as first birder of the year! He also told us about a flock of Cedar Waxwings on Southbridge Street, but we missed them. However, we did have this pair of Red-tailed Hawks sunning themselves in the late afternoon. (Again, all this pairing up of birds is making me think that Breeding Bird Atlas time is just around the corner.) 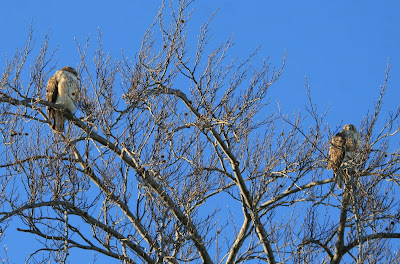 As we headed home we decided to make one more pass through Downtown for the Peregrin (we had dipped earlier in the a.m.) We were totally suprised to find him sitting on one of the letters of the Flagship Bank building. We've had them here before in year's past, but they don't seem to have been as regular in downtown lately. 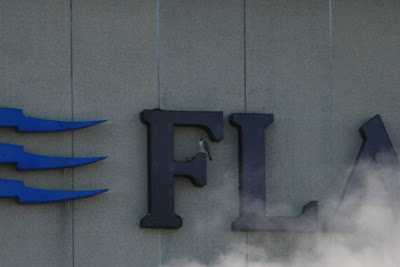 If you look closely in the "F" you can see the remains of a recent meal! 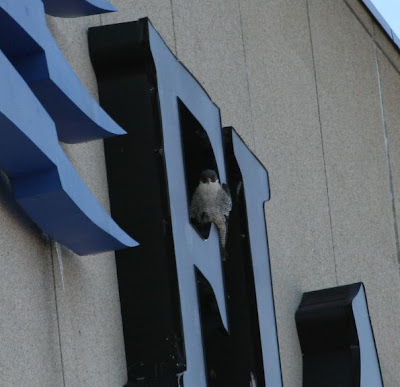 So we ended the first birding day of a new year on a high note -- and with 49 species on a new year list (including 15 species of waterfowl and 5 species of raptors.) Not bad considering we never strayed more than 10 miles from downtown Worcester.

On Friday we didn't stray far either. We decided to do the Rhode Island section of the Blackstone Corridor and start our RI list off as well. Plus we needed to keep the birding somewhat local since we had plans with our 8-year old granddaughter for a "sleepover".

Much like the day before, waterfowl and raptors were prominent. While Turner Reservoir in East Providence usually provides great diversity, all but a small part was frozen. So we were limited to Common and Hooded Mergansers....a bit disappointing. 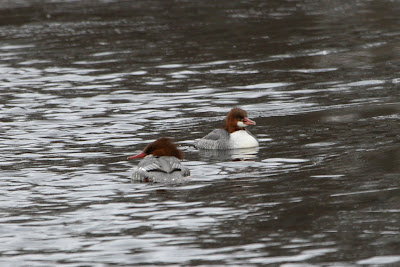 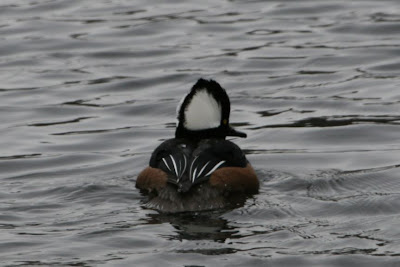 The Seekonk River did provide more species of waterfowl (14 for the day) and this great view across the river of a Red-tail riding on Pegasus. (I've always wondered why there's an old Mobil Oil trademark on top of a building there...did this used to be a corporate headquarters?) Anyway, the Red-tailed Hawk looked great "riding" on one of his wings. 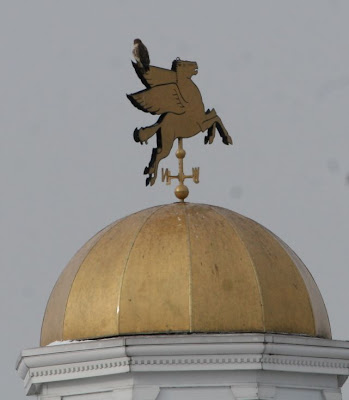 We ended our shortened day at Swan Point Cemetary where the Robins were feasting on holly berries. Interesting that our 47 species for the day came close to our previous day's Worcester total -- 2 cities at opposite ends of the Corridor. 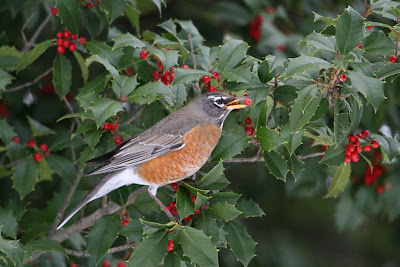 So we headed back to Worcester to get ready for our "sleepover". Our granddaughter thought for sure we would wake her at 3 in the morning to go birdwatching....but we didn't. After a very leisurely start we headed out to Quabbin hoping to show Samantha a Bald Eagle up close and personal. Of course, we did make the obligatory stop at the miniature horse farm and when we arrived at Quabbin we were treated to two adult Bald Eagles right at the Administration Building. 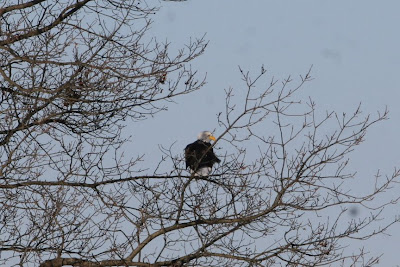 Sam loved using the scope to watch the eagle and when it passed out over the water she was even able to follow it with her bins. While we'd love to see her develop into a birder, realistically we know we are competing with soccer, jujitsu and Harry Potter for her attention.
Regards.....Sheila
Posted by Sheila Carroll at 6:45 PM