So having 2 Ivory Gulls in Massachusetts at the same time is totally unheard of (unless you remember back to the 1800's). So we decided to go to Plymouth to see this adult bird, especially since we heard that the scene there was more manageable. And it was! 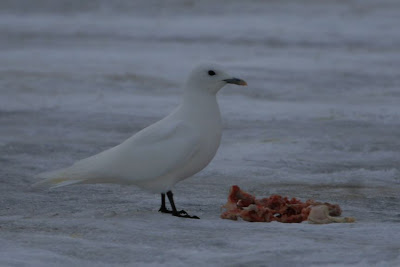 When we arrived just before 8, there were about 75-100 birders already there. Judging by the numbers of out-of-state plates on cars, it was apparent that folks were from all over. I overheard one women saying she had flown in from Texas the night before. Now I totally understand going for a spectacular bird when it's in your home state or even fairly close by (the NH Hawk Owl) but I don't think I could justify the carbon footprint of flying in from Texas. 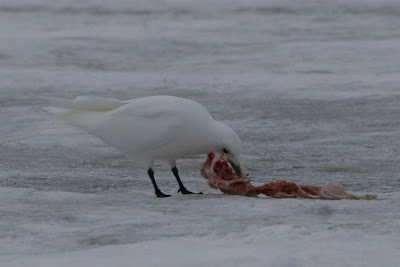 Anyway the crowd was far better behaved than the Cape Ann group (maybe it was all of those out-of-state birders?) I'm not sure how I feel about throwing out chickens for the bird. But I'll leave that controversy to others to debate (which I've heard they've been doing on Massbird.) 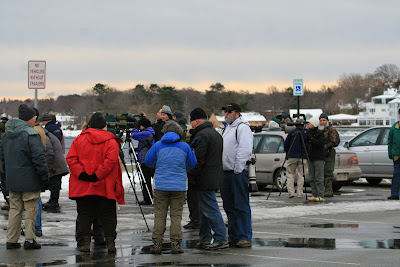 It was actually fun to see some folks that I haven't seen for a while, and a number of people came up to express their condolences to Mark on the recent passing of his mother. Maybe is was the size of the parking lot or just knowing that I wasn't on a tiny peninsula, but it definitely felt more manageable and less chaotic. And because of that we didn't flee the area! We decided to poke around and see what else we could find. 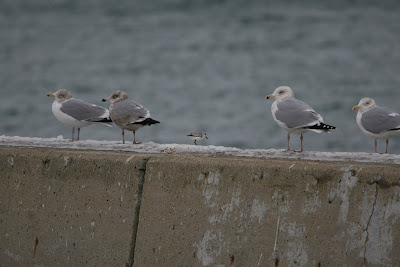 We went as far south as that restaurant on 3A (it used to be Bert's) right past the entrance to Plymouth Plantation and just at the start of the road out to Plymouth Beach. Along the seawall we were treated to a Sanderling poking among the Herring gulls -- the size difference is amazing! 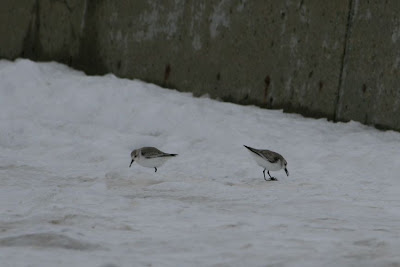 We spotted two more picking in the snow in the parking lot....what for I have no idea, since it didn't look like a rack line to me. 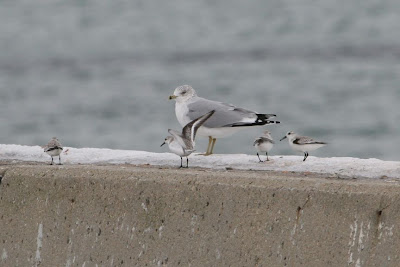 Actually, there were quite a few of them along the seawall and it was great to see them behaving differently than they normally do. 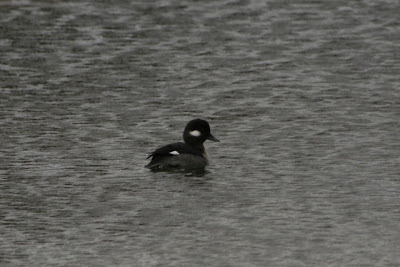 As we headed north up 3A we stopped by Stephen's Field. The parking lot runs down right to the bay where we've often had Lesser Black-backed Gull (not this time) and there's a tiny, tiny pond where we have had Gadwall or Hooded Mergs. This time the pond held a few Mallards and Blacks, but also this female Bufflehead. She seemed quite happy to be in there by herself. 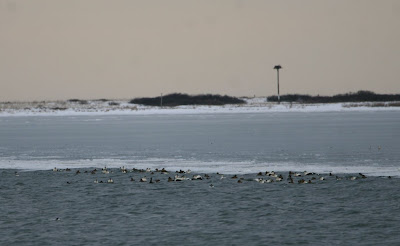 Although as we looked out to the bay, we noticed she was only a short flight from other seaducks, including Common Eider, Common Goldeneye and other Buffleheads. BTW that's Plymouth Beach in the background. 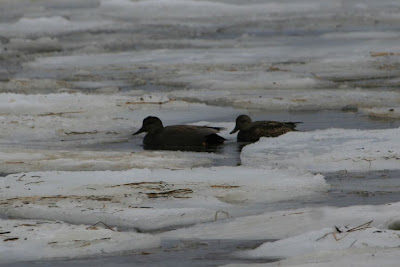 We did have a pair of Gadwall floating in among the ice flows. 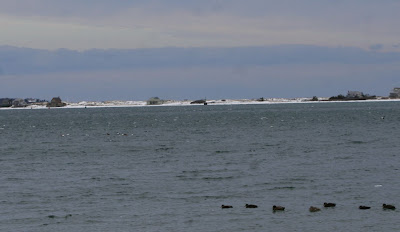 And we did scour the shore of Plymouth Beach looking for a Snowy Owl, but to no avail. 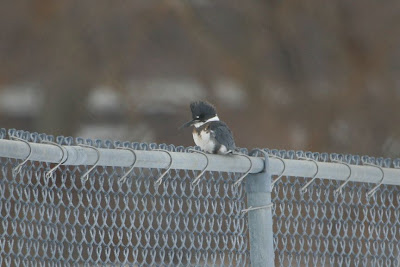 One of the nicest surprises was this Kingfisher working hard for a meal. It's always great to hear their "rattle" call in the dead of winter. You know that means there's probably open water nearby. With not too much else around we decided to check in on the Ivory Gull (which had moved from the parking lot out to the long jetty that goes out into the bay) and stop at another overlook just north of the jetty. We could see that there were Brant in there, and you always want to check in case there's a Black-bellied in among them. 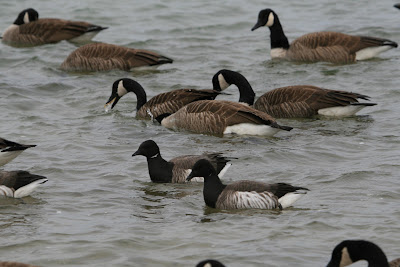 It was nice to see the size comparison with the Canada Geese. 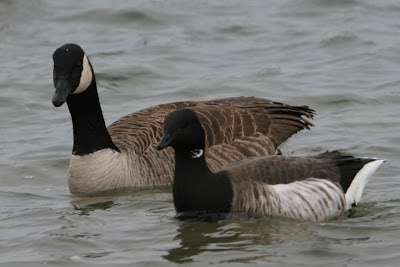 Both species were in this area due to the plentiful Eel Grass so we spent some time just going over the flocks to see what else might be tucked in. 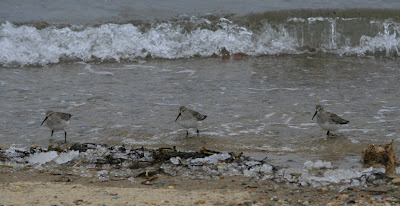 While sitting there we had 3 Dunlin fly in and land right over the seawall in front of us. They were a little skittish flying up the shore and then back again several times before finally settling down to feed. 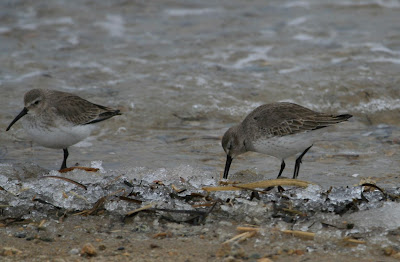 This provided some really close observation and great looks at the slightly decurved bill on these birds (especially the one on the left). 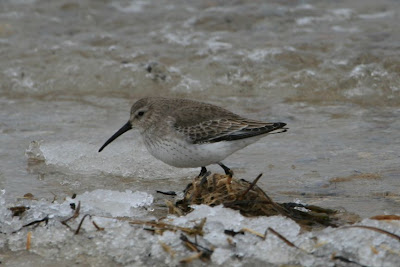 As we headed back Rt. 44 to 495, we decided to stop by the Cumberland Farms fields off Rt. 105 to check for Rough-legged Hawk. We had a beautiful dark-phase bird flying out quite a ways, but we didn't see any Short-eared Owls. But this place is definitely worth another trip in late February for photography, hopefully of both species.

Regards.....Sheila
Posted by Sheila Carroll at 5:20 AM