The Northern Berks on Sunday, 1/24

This past Sunday we decided to head out to the northern Berkshires. (Someone hoped to find a Massachusetts Hawk-owl.) I was a little concerned having heard about the "devastation" that the December ice storm had wrought. However compared to places like Holden and Rutland and other parts of Worcester County, they seemed to have fared pretty well. It is always fun to see the same places in the different seasons. This view looking north from Cheshire towards Vermont is usually lush and green and filled with Turkey Vultures and very close to the huge Cliff Swallow colony. 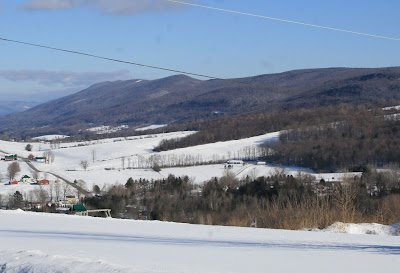 Don't get me wrong, there were still some birds around. But these turkeys certainly seemed like they would have preferred that lush green valley as well. 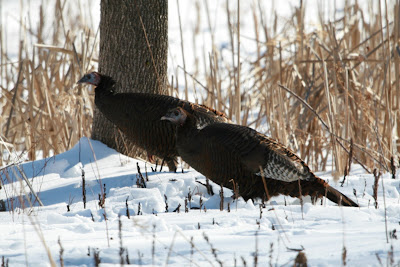 There's a great WMA along Stafford Hill Rd. in Cheshire that is wonderful to bird and butterfly in spring/summer/fall. But today we were confounded by some very large machinery. Not exactly sure what they were doing in there, but hoping it won't disturb the area too much. BTW, all of this area is in the 3 blocks Mark & I signed up for this year doing the Breeding Bird Atlas. This includes quite a bit of the towns of Windsor and Cheshire. Besides coordinating for Worcester County, we usually try to take blocks outside of our local area as well. (Not too hard to do when you're crazy like us and sign up for 9-10 blocks each year!) 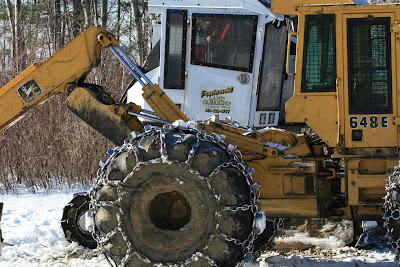 The one species that seemed to be just about everywhere was Bluejay. 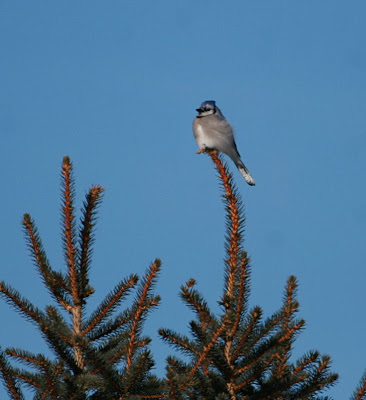 And we were delighted to find great numbers of Pine Siskin. Even though we put out thistle seed at our feeders, we are in the city, so you just don't get the flocks of siskins that we've been hearing about. We'll hear them fly over and we've had one or two stop for a bite, but it was fantastic to see and hear large numbers in lots of different places in the Berks. 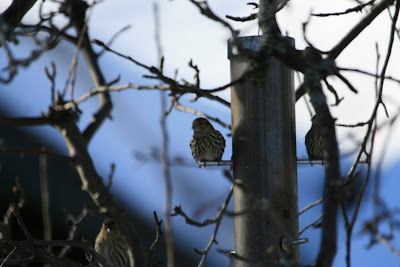 Driving along the back roads is not just good for feeders, but also farm animals. Now goats and pigs are probably two of Mark's favorite domestic animals, but he was especially thrilled to find "goats in coats"! Not something you see every day. Of course this prompted one of our silly conversations about the alliterative quality of animals. We struggled to move beyond "cats in hats" and somehow "pigs in wigs" didn't quite conjure up the same image as "goats in coats". Needless to say the conversation then went off in tangents and if I were to share it all with you, you would definitely wonder about us.....unless you already know us. 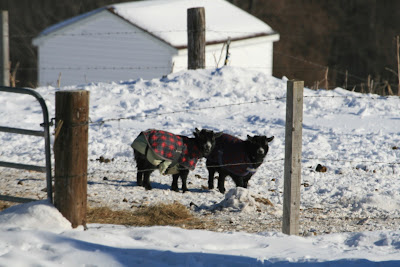 Back to the birds....I included these next two shots of Pine Siskins not just because these are my first documentable shots of Pine Siskin, but because when I got home and looked at the photos, I was struck with the overall "lightness" of the bird in the lower middle part of the photo. It definitely shows more yellow than the other 3 siskins. 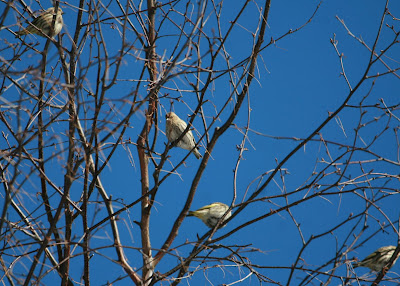 Once it turned around I noticed far less definitive streaking on the breast (much more diffuse) and even a yellowish cast about the face. Could this be the Bonaparte subspecies from the southwest? The following is an excerpt from a description Mark sent me from BNA.
(Bonaparte). Resident from n. Baja California, s. Sonora, and w. Chihuahuasouth to at least Michoacán, Mexico and east to Hidalgo and extremew.-central Veracruz. Although birds in mountains of n. Baja California areascribed to this race by Am. Ornithol. Union (1957), a study by Unitt et al.(1992) suggests that these should be assigned to C. p. pinus . Compared withnominate pinus, longer winged, less extensively and more diffusely streakedon underparts, paler overall, yellow in tail more extensive (Grinnell 1928,Unitt et al. 1992). 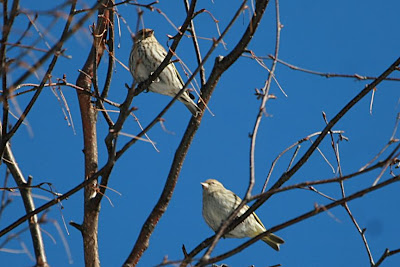 If anyone has more experience with this subspecies, I'd love an opinion. 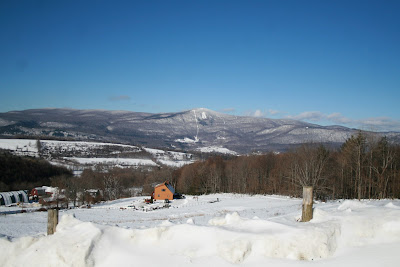 We ended our winter foray to the northern Berks and wandered back to Worcester thankful for yet another day in the field birding.

Regards.....Sheila
Posted by Sheila Carroll at 4:33 AM