So after diddling around in the Brookfields on Saturday morning so we could pick up seed at Bill's store when it opened, we came home unloaded the seed, put out some additional feeders since it was so cold and the birds had to eat. Then we got some lunch and tried to get warm ourselves. So when Mark finally checked emails some time after 2 we learned that an Ivory Gull had been putting on a spectacular show at Eastern Point since before noon....so that's the bitter frustration. What the hell good does it do to have a cellphone if no one ever calls about the good things???? As I sit here Sunday morning watching yet another snow storm dump on us, I think it's been the perfect end to a perfect week (notice the sarcasim). So here's how we spent our Saturday rather than viewing an Ivory Gull..... 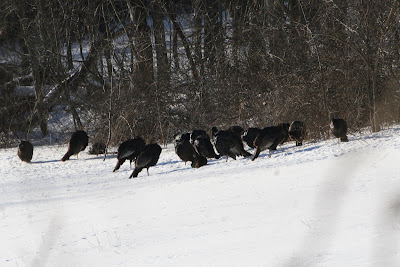 It was interesting to watch a large flock of turkeys trying to stay warm in the sub-zero temps. Some of the birds were fluffing out every feather they had and tucking their bare-skinned necks underneath. It was like they were trapping whatever warmth they could generate. 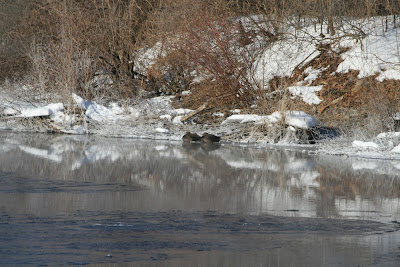 In West Brookfield right near the outflow of Wickabog where it flows under Rt. 9 into the Quabog River we did find 2 Black Ducks tucked in along the icy shore. 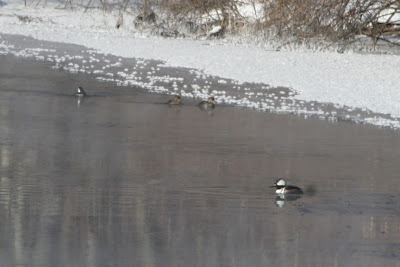 There were also two pairs of Hooded Mergansers as well. They were diving and feeding like it was almost balmy. 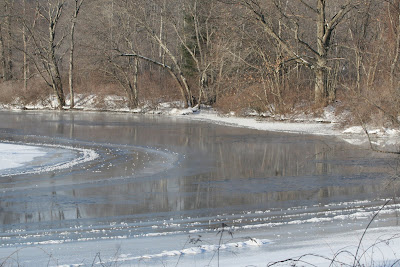 But it was pretty clear that the river is starting to close in, and these little ducks (though very hardy) better get their little duck tails out of here before they are breaking ice with their pointed beaks! You could almost see the ice building up along the shore and moving further into the middle of river in some places. 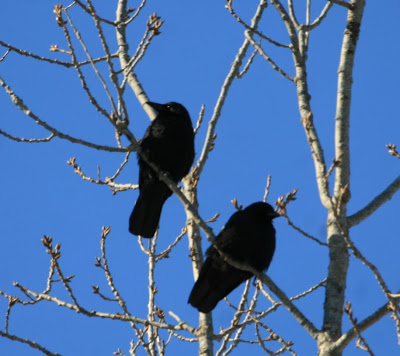 We decided to check the marsh in Warren that's in our Christmas Count area, but it, too, was frozen and the blackbirds we had in December seemed long gone. We did have some crows that barely moved when I braved out of the car to get a photo. 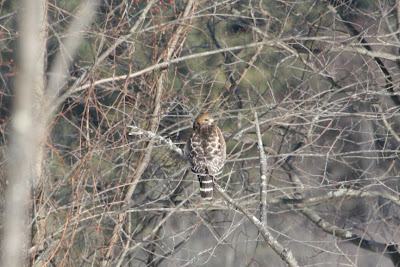 Probably the nicest bird was this Red-shouldered Hawk sitting at the edge of the same marsh on New Reed St. This was actually our 2nd Red-shoulder of the morning and this one seemed intent on finding any of the little animals whose tracks were everywhere.

So we ended our morning with a 20-degree swing in temps (-10 to +10) and headed out to pick up our bird seed. And ironically this was just about the exact time Jeremiah Trimble was finding the Ivory Gull. Another tale of being in the wrong place at the wrong time. I guess I'll chalk it up to the miserable colds we've both had all week or just bad karma!