This past weekend we tried to get some owling in Saturday morning since there had been such a great moon Friday nite and there was very little wind. Unfortunately, there had been so much snow and ice we worried about finding Saw-whets. We decided to try Rutland State Park since we've had good luck owling there in the past and usually Coldbrook Road stays open in the winter as long as there isn't a humongous blizzard. 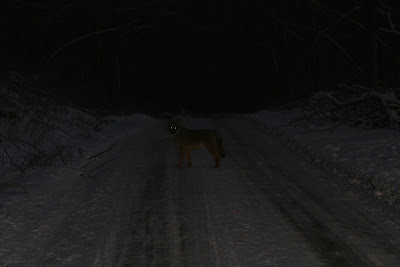 Driving in there in the dark is always a little eerie...you can often hear animals moving through the woods. So it was no surprise to look in my rear view mirror and see this coyote trotting down the road after us. Seriously, he looked like he was going to come right up to the car! In my excitement I tried to lure him in with a Dunkin' Donut. Of course, any self-respecting carnivore wasn't going to even look twice -- which he didn't. 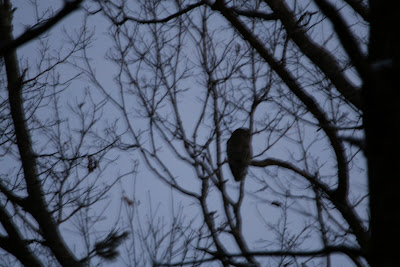 The only owl were ever saw was this Barred Owl, which came in as we whistled a Saw-whet call. As you can see I still haven't quite figured out the metering on my camera, so the shot is quite blurry, but it's the best of a bad series of photos. I definitely have to look into taking a digital photography course that Richard Peterson recommended! 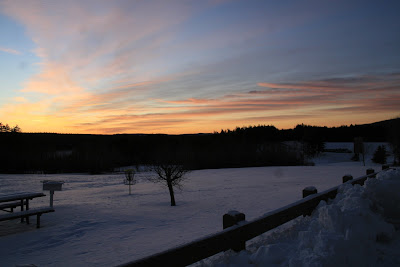 We ended our pre-dawn efforts at Barre Falls Dam with a meager 2 Barred and 2 Great Horned Owls. Our fears about the little owls moving out seemed to be true. We hoped that we would have some finches flying over right at dawn, but other than a lone Snow Bunting (who I tried spishing in) it was pretty quiet. So we decided to move west and go as far as Quabbin so we could get home before any flakes fell. 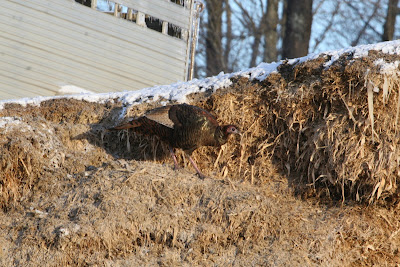 We decided to take Pleasant Street out of Barre (instead of Rt. 122) going past the Buddhist Center. That back way of going into Petersham is always a nice alternative, since you go through some nice farmland. It's also the "back way" into Brooks Woodland Preserve (Trustees property) and a great farm complex on Maple Street after Pleasant turns into East Street in Petersham. Turkeys are usually a regular feature. We watched a few fly across the road and then pick among this huge pile of silage. 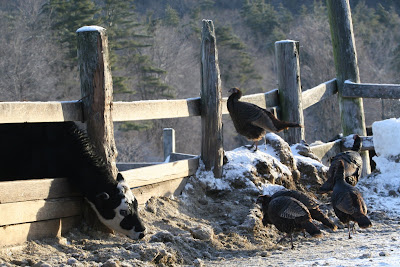 And we weren't disappointed watching a flock mingling in with the cows. 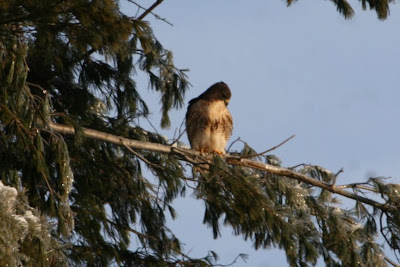 We also had this Red-tail trying to get firmer footing on any icy pine tree bough. 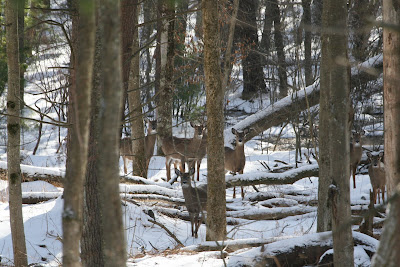 As we turned into the road to the Administration Building at Quabbin, Mark spotted a good-sized herd of deer picking through a recently-cutover area. But there wasn't much in the way of birdlife. We did go through an agonizing 15 minutes watching a deer swim all the way across the reservoir. We estimated it was just over a mile and the deer look exhausted when he finally came out of the water on the western shore. It was a short, morning trip as we headed back to Worcester so we could pick up stuff at the store and settle in for another snowstorm. 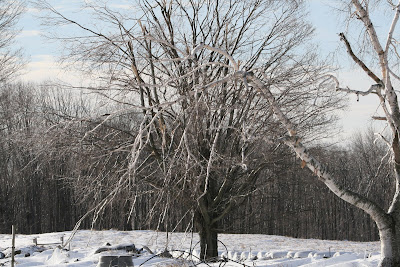 Sunday afternoon, after the snowblowing was done, we headed out to the Wachusett Res to see if there was anything hanging around. Fresh snow always gives that "clean" look to everything. The reservoir was starting to freeze in a lot of places, and we were concerned to find 3 first-year loons still hanging around. They need a long "runway" to get airborn, and if it continues to freeze up I'm concerned these guys won't get out of here. There was also a good showing of Common Goldeneye, Hooded Mergansers and one Black Scoter. We had hoped to find the Canvasback we found on the first. 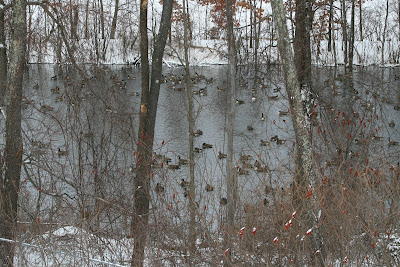 One place you can always count on finding waterfowl is the "Pond That Never Freezes"....at least that's what we call it. If you go to Google Map you'll see this small section just south of Coachlace Pond right behind the water treatment plant in Clinton. I'm not sure whether this is spring fed or just polluted, but the ducks and the geese pile in there when everything else is frozen. In addition to the geese and mallards, we had Black Duck, Common Goldeneye, scaup and the Canvasback! It's lousy trying to get a view of this place, but the gate was open to the water treatment plant, so we drove in (probably highly illegal, but there were no signs and no one was there to ask). 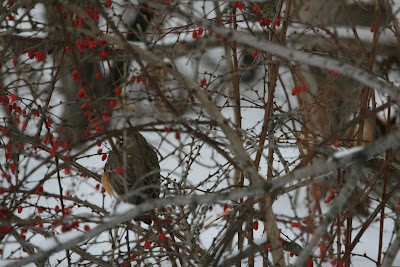 There were also lots of land birds in the bushes and tangles next to the fence right off Rt. 110, and we had a Flicker in addition to the Robins and Bluebirds feeding on the berries and sumac. 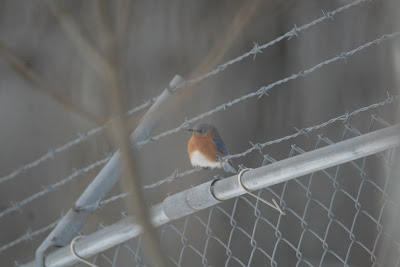 It's always fun to get good landbirds in the winter. And a real plus when you're this close to home!

Posted by Sheila Carroll at 4:17 AM