Fairhaven: The Bad and the Good ~ Saturday April 5th

We traveled to Fairhaven this past Saturday to see how spring was progressing in southeastern MA.  This is always a fun area to bird...seeing what birds are at Fort Phoenix, checking out Angelica Rock for early breeding and visiting West Island (my favorite.) 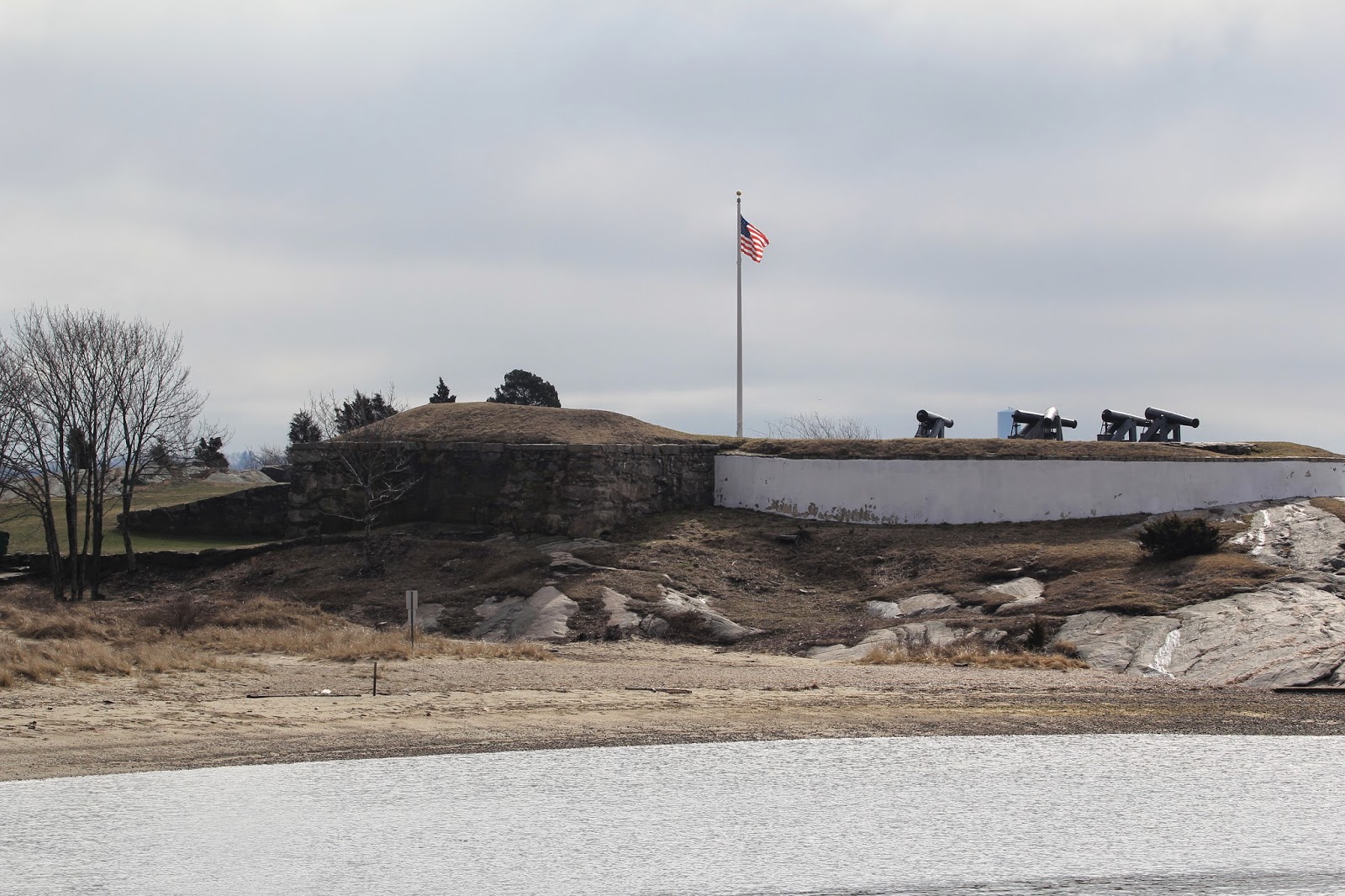 We had a nice flock of Greater Scaup in the harbor south of Rt. 6 and we kept seeing small flocks throughout the morning....although it's clear that a lot of the birds we had just 2 weeks ago are starting to move back north. 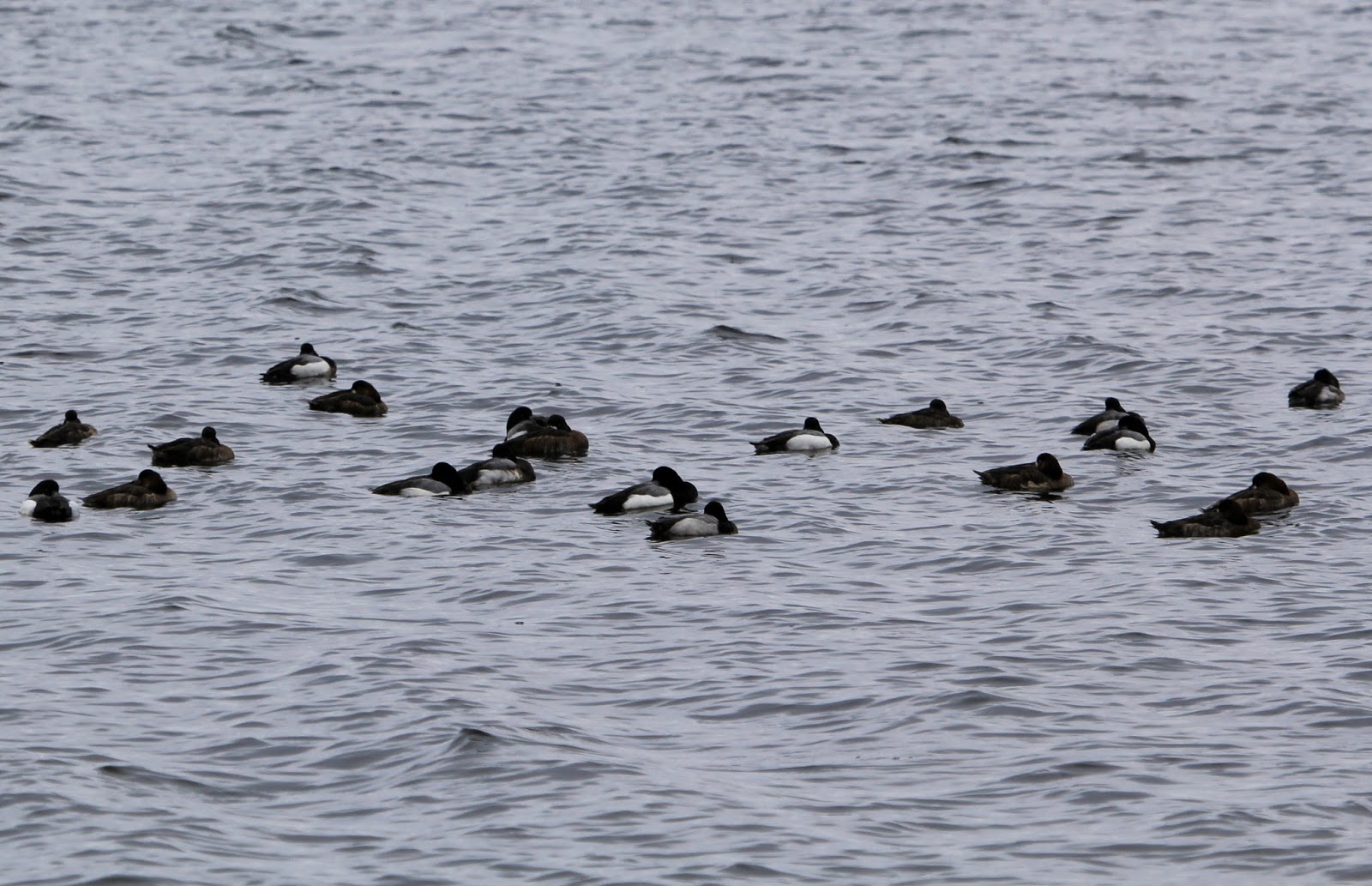 From the hurricane barrier at Fort Phoenix you could see the harbor was busy as they are getting the ferries ready for service from New Bedford to Martha's Vineyard and also to Cuttyhunk... 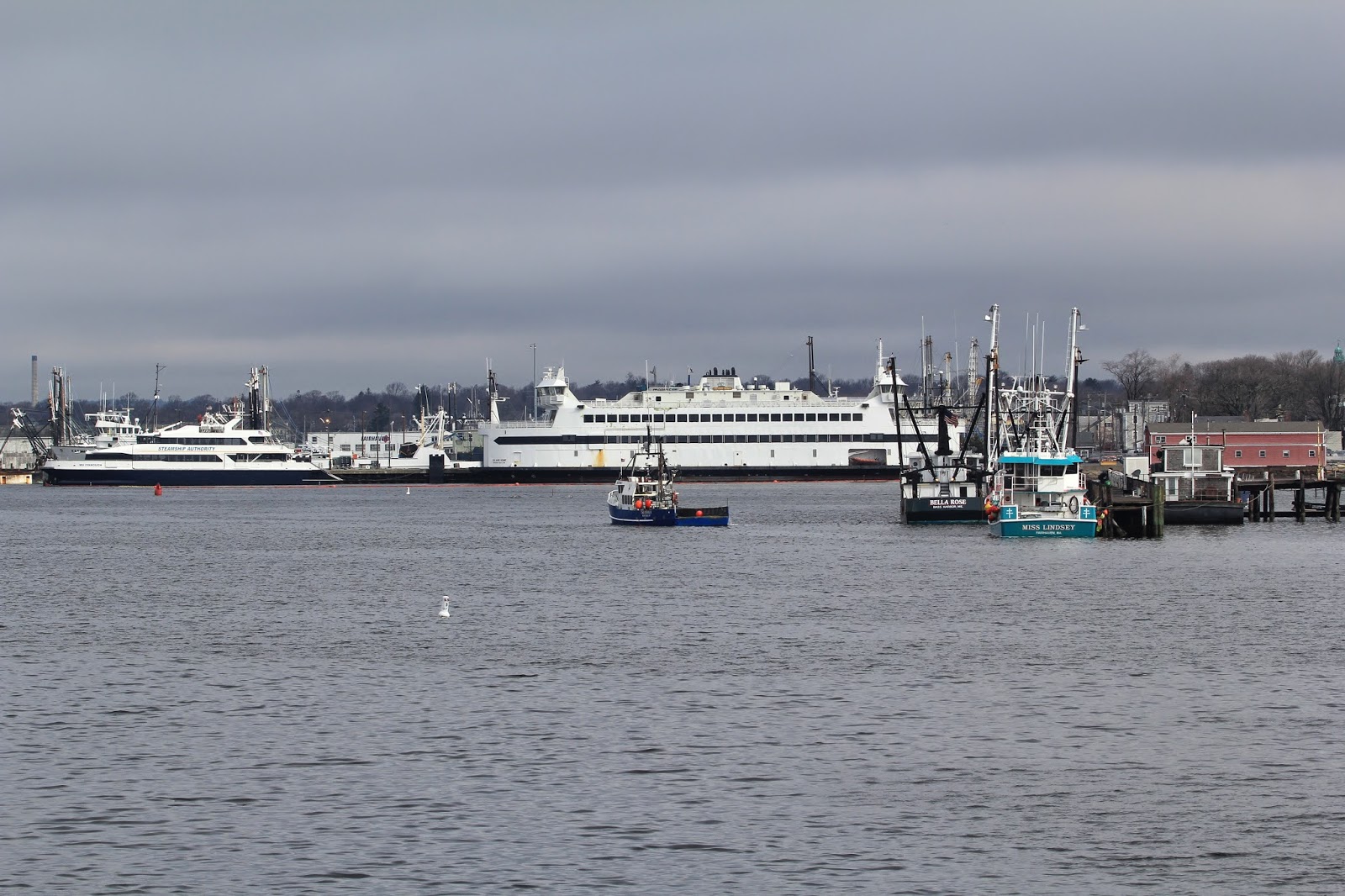 ...and fishing boats were coming and going. 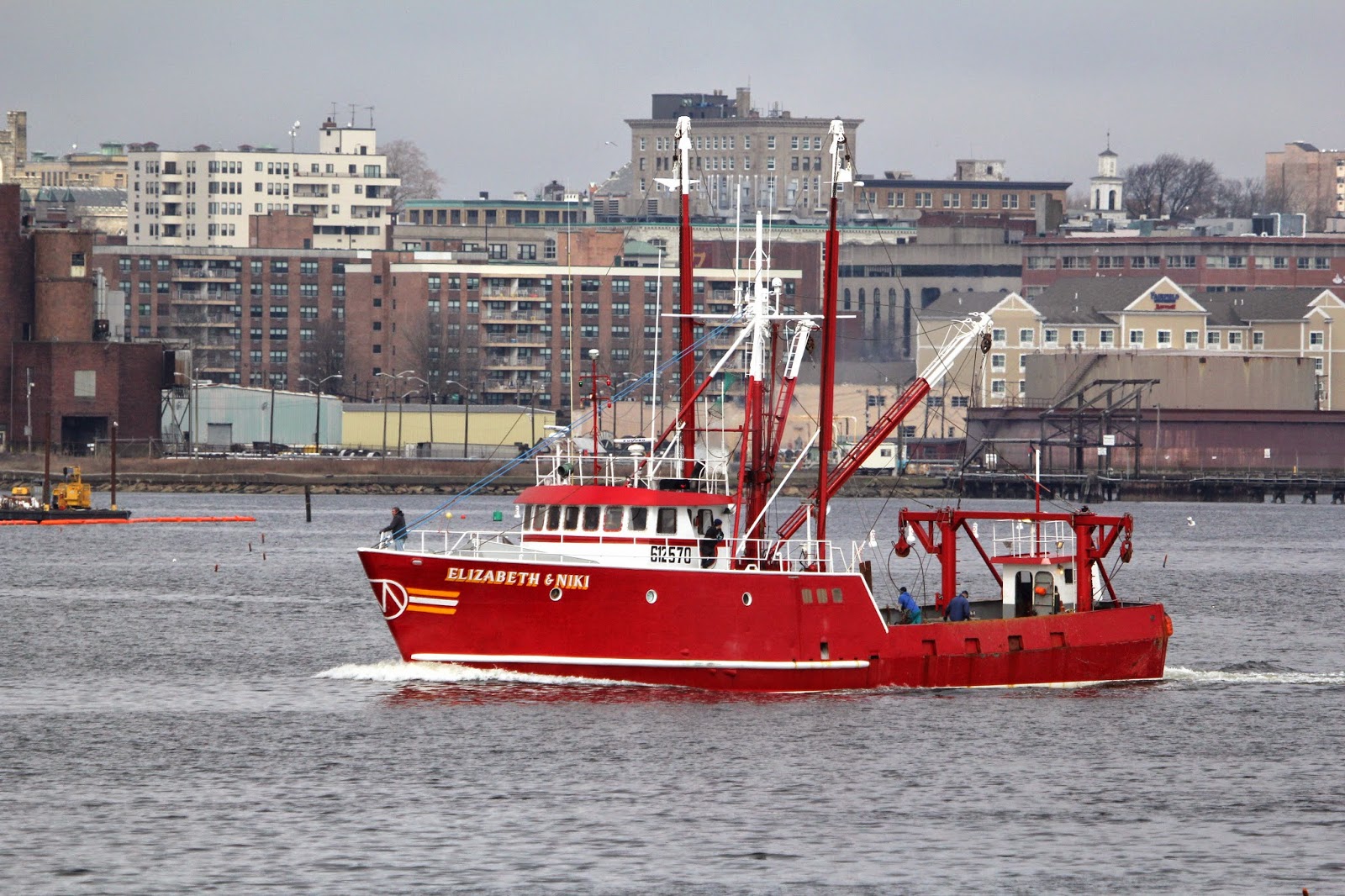 There were lots of flocks of Horned Grebes in the waters and we even had this Red-necked Grebe fairly close in.  If you enlarge the photo you can see he was starting to go into breeding plumage with the red starting to fill in on his neck. 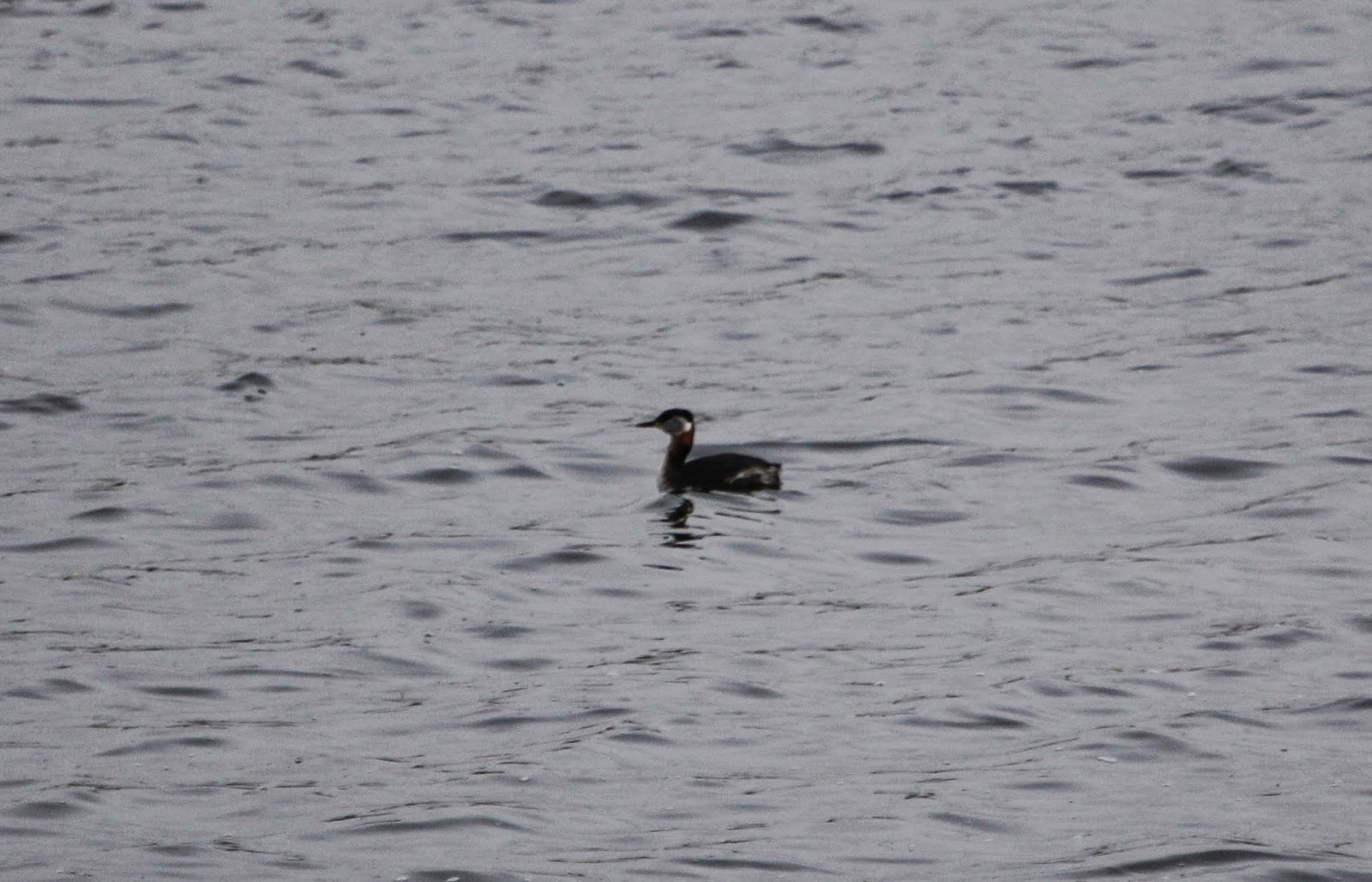 We drove down Sconticut Neck we decided to stop and check for ducks in Little Bay and Nasketucket Bay.  At the end of Edgewater we had our first American Oystercatchers of the season.   We had a pair calling and doing a display flight right off the end of the boat ramp. 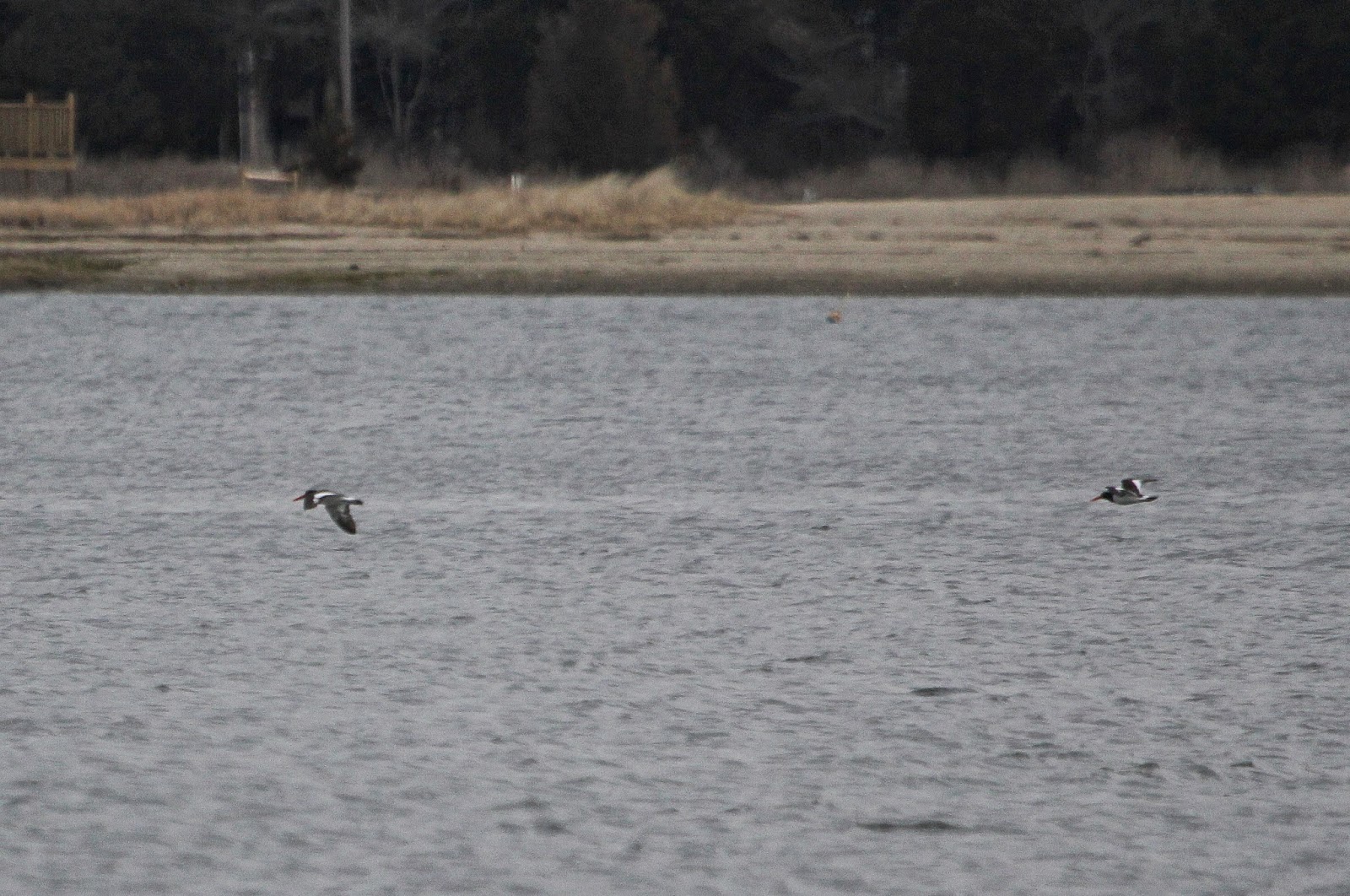 Our big surprise (and this was a good one) was a young Snowy Owl right in the bushes of the parking lot.  It was actually perched on a rock and as out car pulled into the parking area flew a few feet and just stared at us.  We shut off the car immediately. 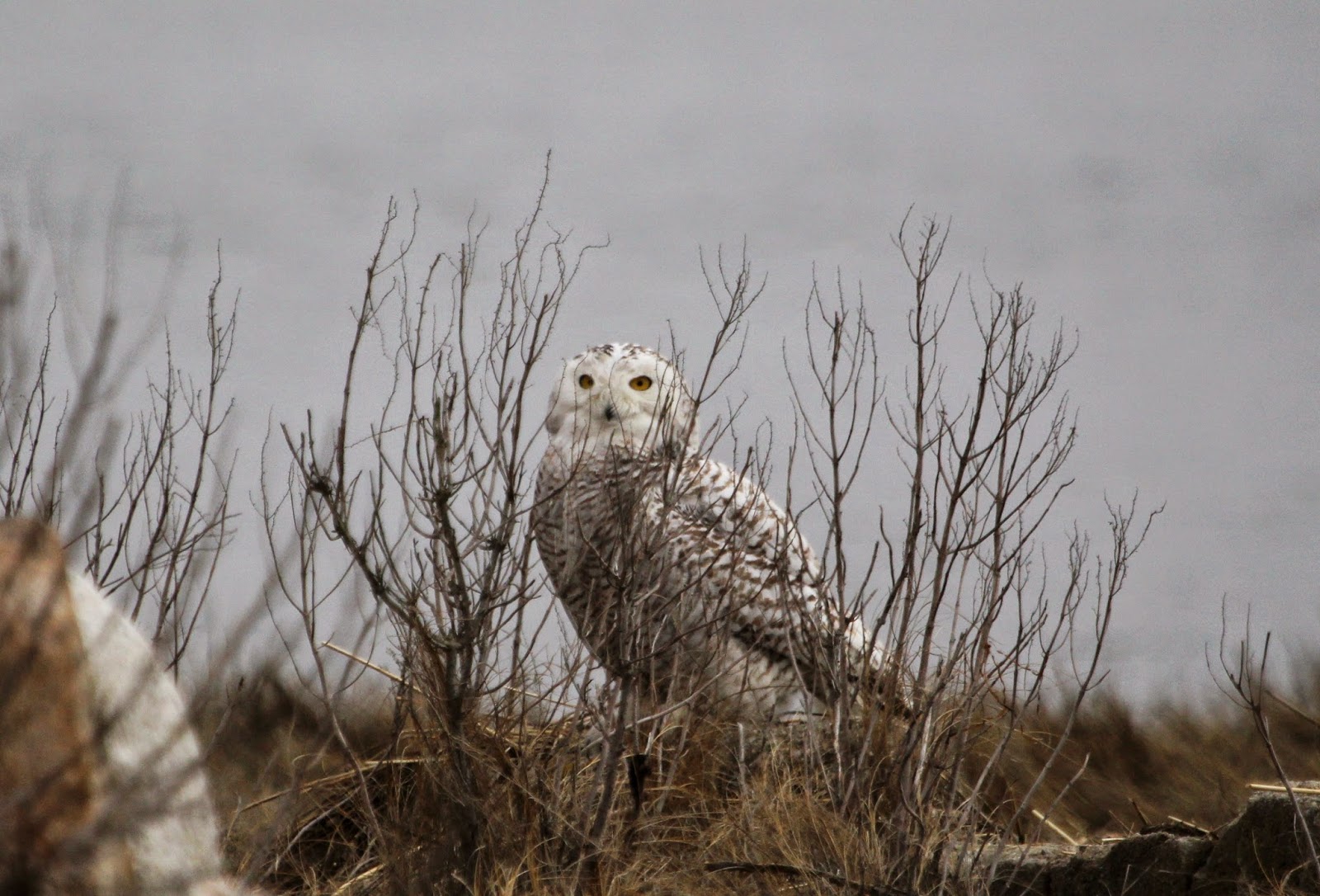 There were two crows dive bombing him the entire time we were there, so we didn't dare get out of the car. 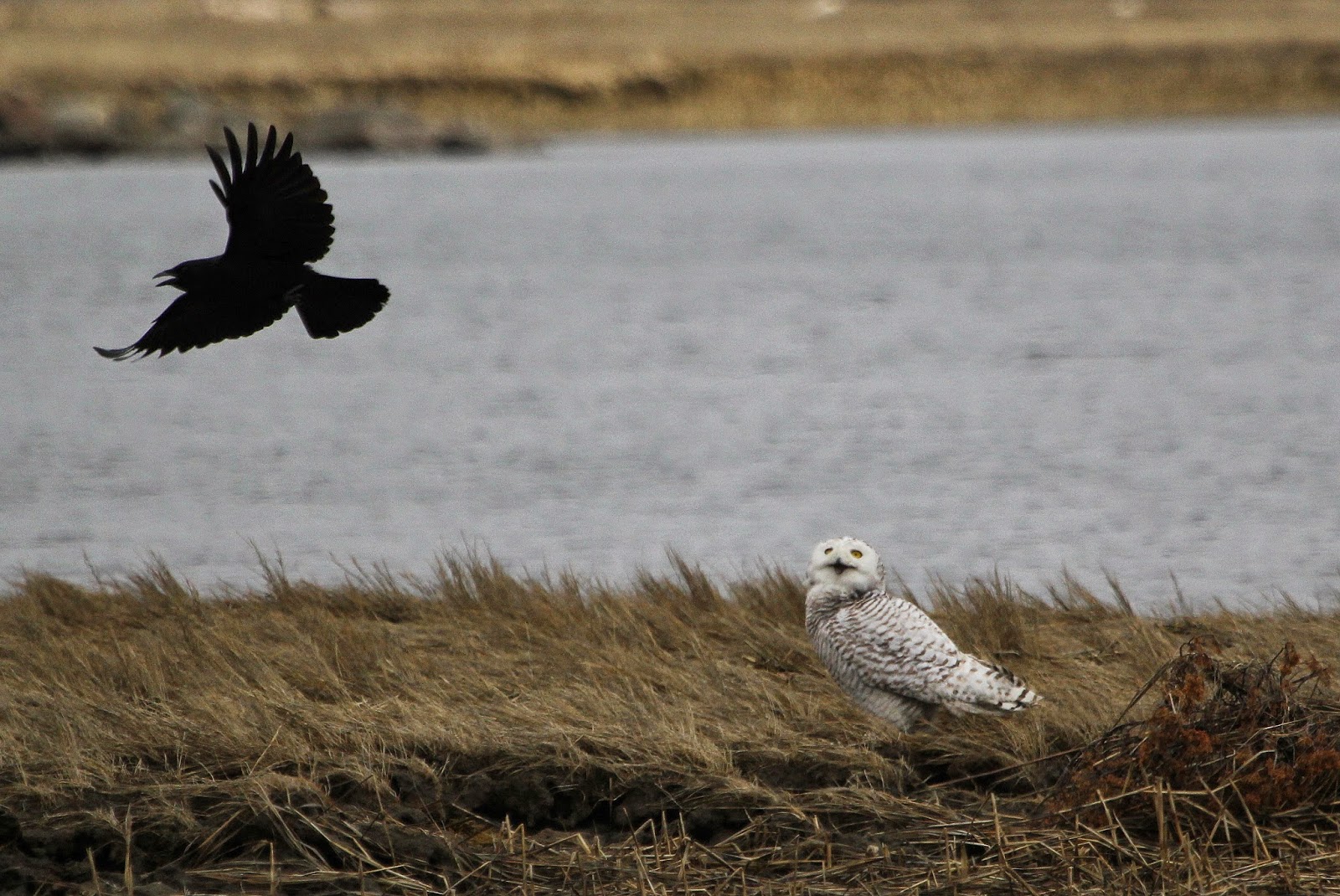 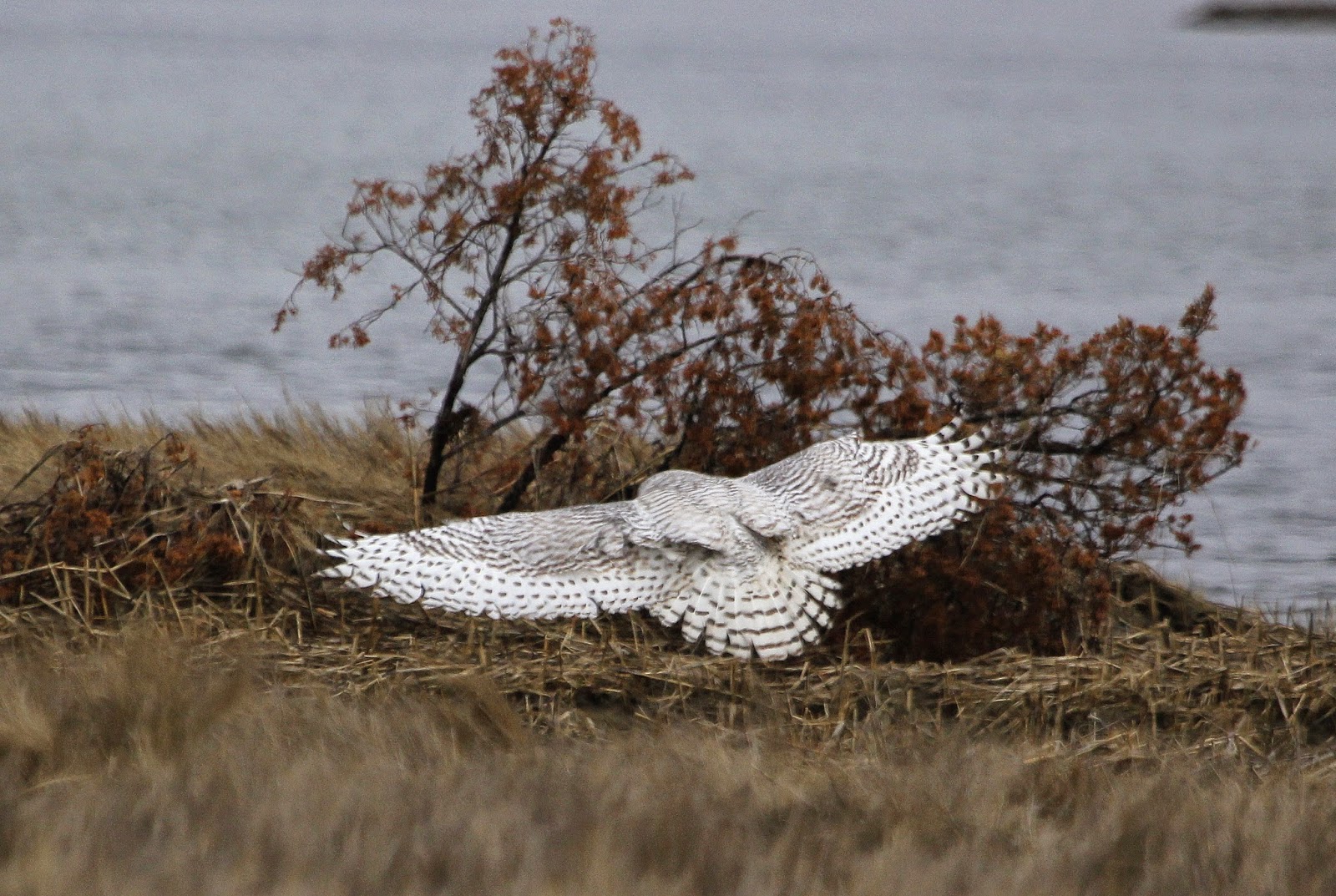 ...and after a few more passes the crows quieted down and left the owl along.  Based on the dark pattern this bird is likely a juvenile born last year and is just now starting to head back to the arctic. 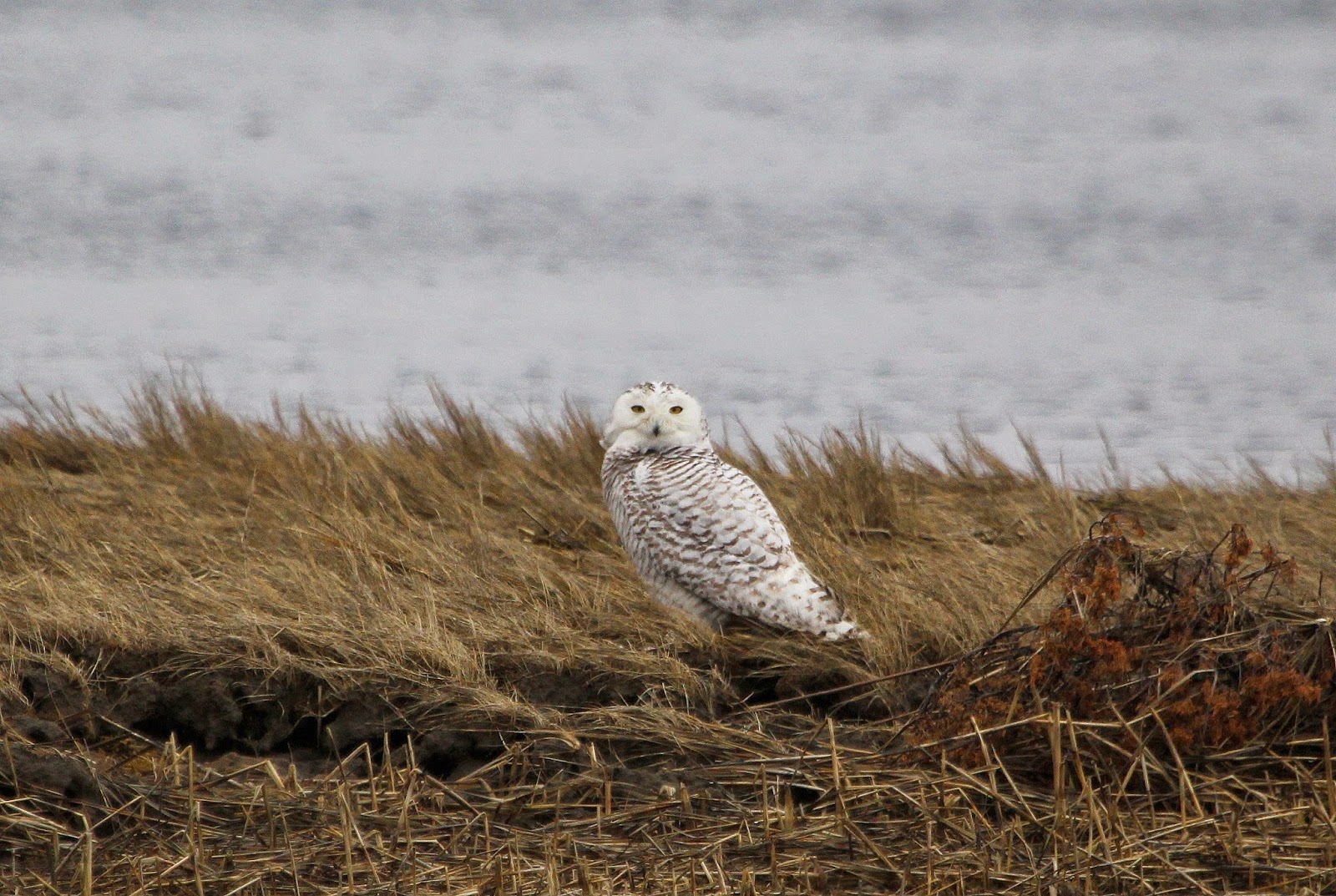 When we left the area (after about 15 minutes) the bird was still there but it's likely he would move off soon since this is a fairly area.  We continued down Sconticut Neck to our favorite overlook of Angelica Rock.  While we had 1 or 2 Great Cormorants, the Double-crested were back and it looked like some of them were already on the nest.  And while we didn't see any Great Egrets yet, it appeared as if some of the gulls had set up their nesting territories as well. 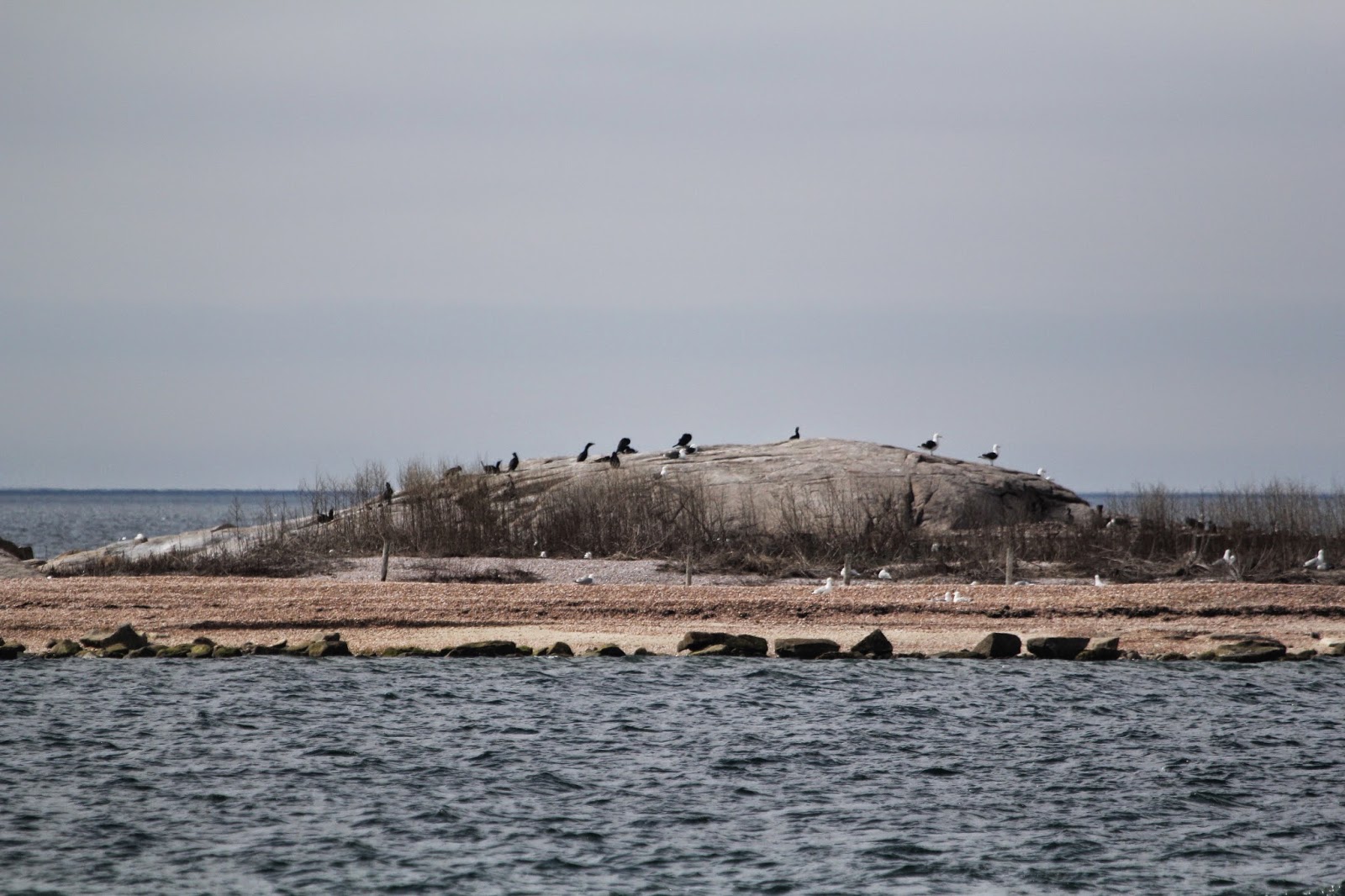 On to West Island and a chance to check on the Piping Plovers at West Island Beach.  These birds are early spring migrants; some coming back in March.  Sure enough when we parked and walked out to the beach you could see that Fish and Wildlife had already roped off their nesting area and there were signs posted.  They usually wait until the first pair appears before roping the area off since you don't know for sure if they will come back to the exact spot.  As many folks know, the Piping Plover is a federally-endangered bird and there have been some fairly public disagreements between people who want to keep the beach totally open and the law which requires they close off that part of the beach where the birds nest.  The area on West Island is pretty close to the dunes at the point so this roped off area helps protect the sensitive dune grasses as well. 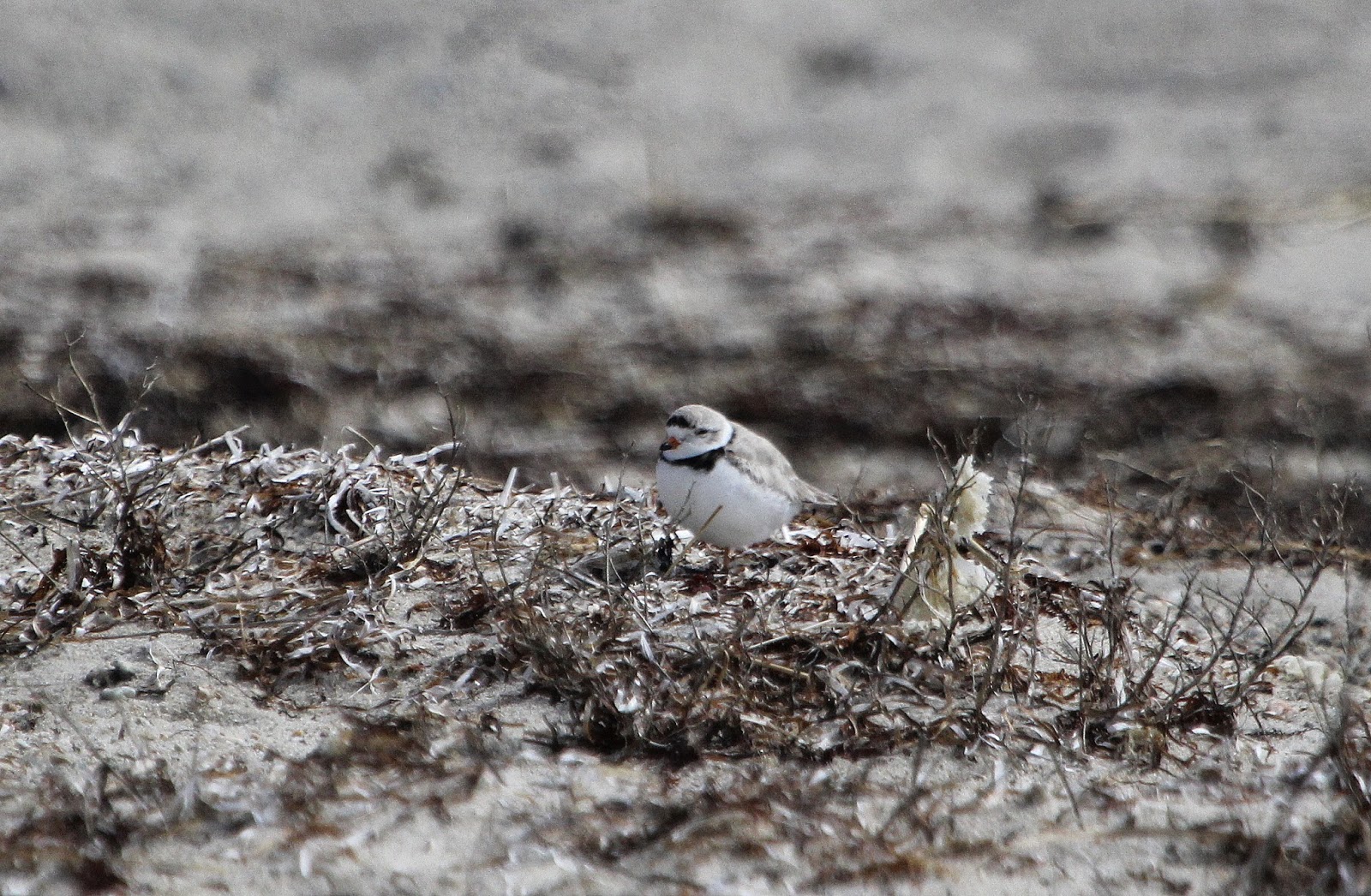 Since it's pretty early in the season, there were only two others cars in the parking lot and we didn't see anyone when we walked out to the beach.  Unfortunately as I walked down the beach to get some photos (totally from the area far outside the patch which was roped off) 3 large dogs came tearing out of the dune grass and ran right through the nesting area headed for me.  Let's just say that the string of expletives that came out of my mouth could have been heard for quite a distance.  Sure enough there were two young women running their dogs (which there are signs when you enter the parking lot that tells you to keep your pets leashed and pick up after them.)  Needless to say the two women weren't paying attention to any of the signs posted.  I immediately headed back down the beach so that I could tell Mark and we could get back to the parking lot to try to get their license plate numbers and report them. 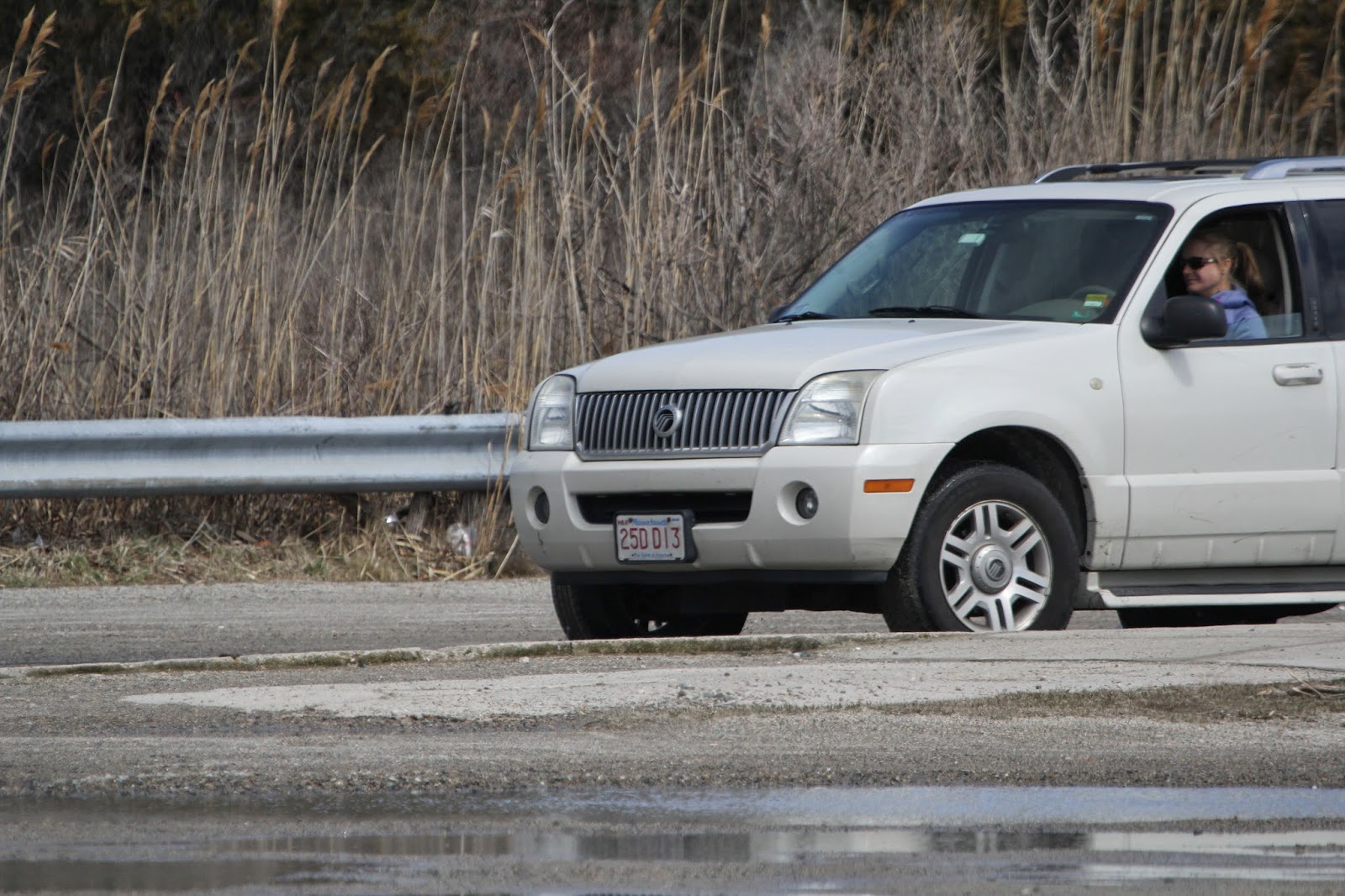 One of the women was already leaving the lot and didn't even make eye contact.  But I did get her license plate. 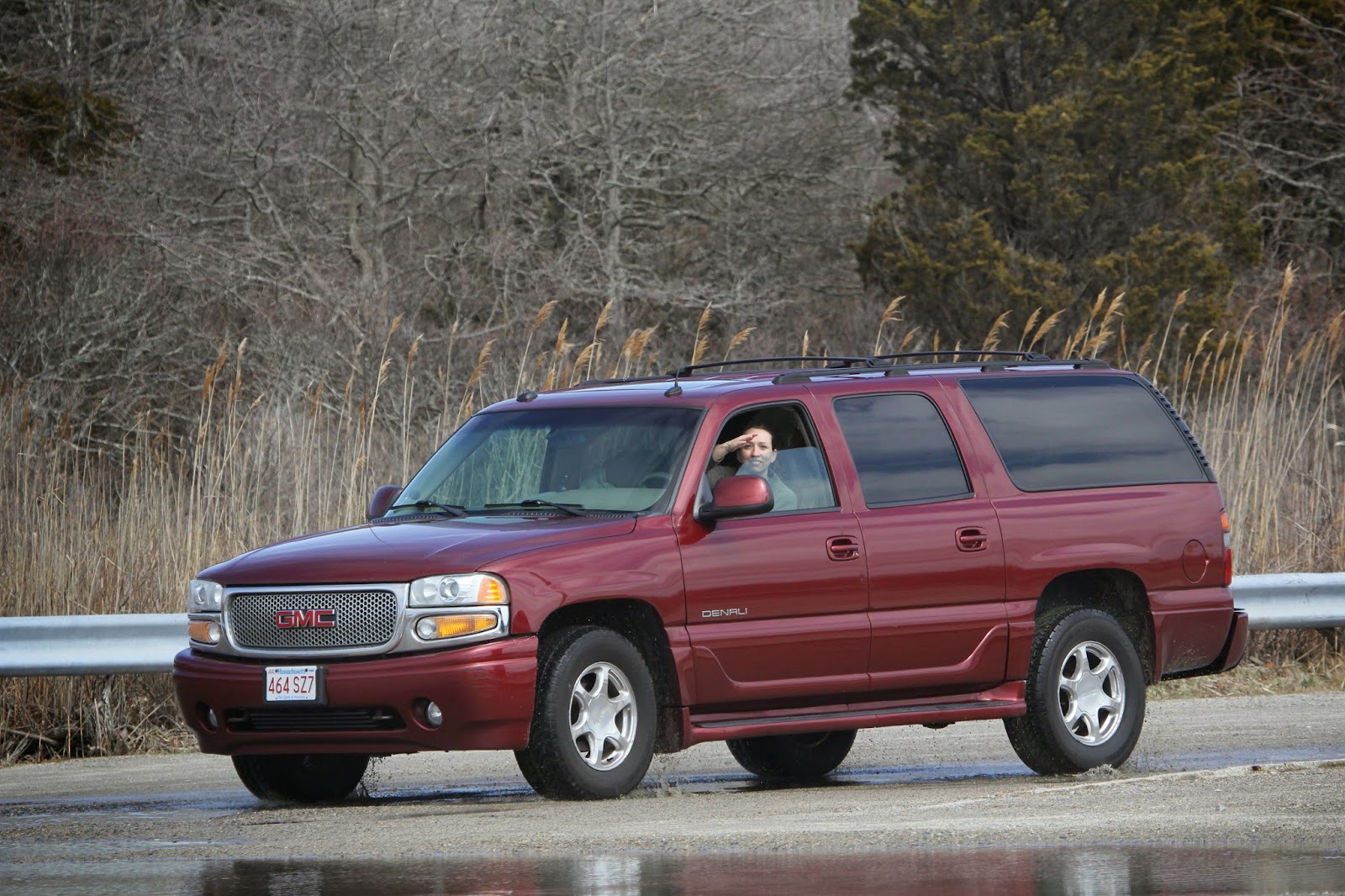 The other young woman wasn't too far behind and decided to give me a salute and then the finger as she drove off. 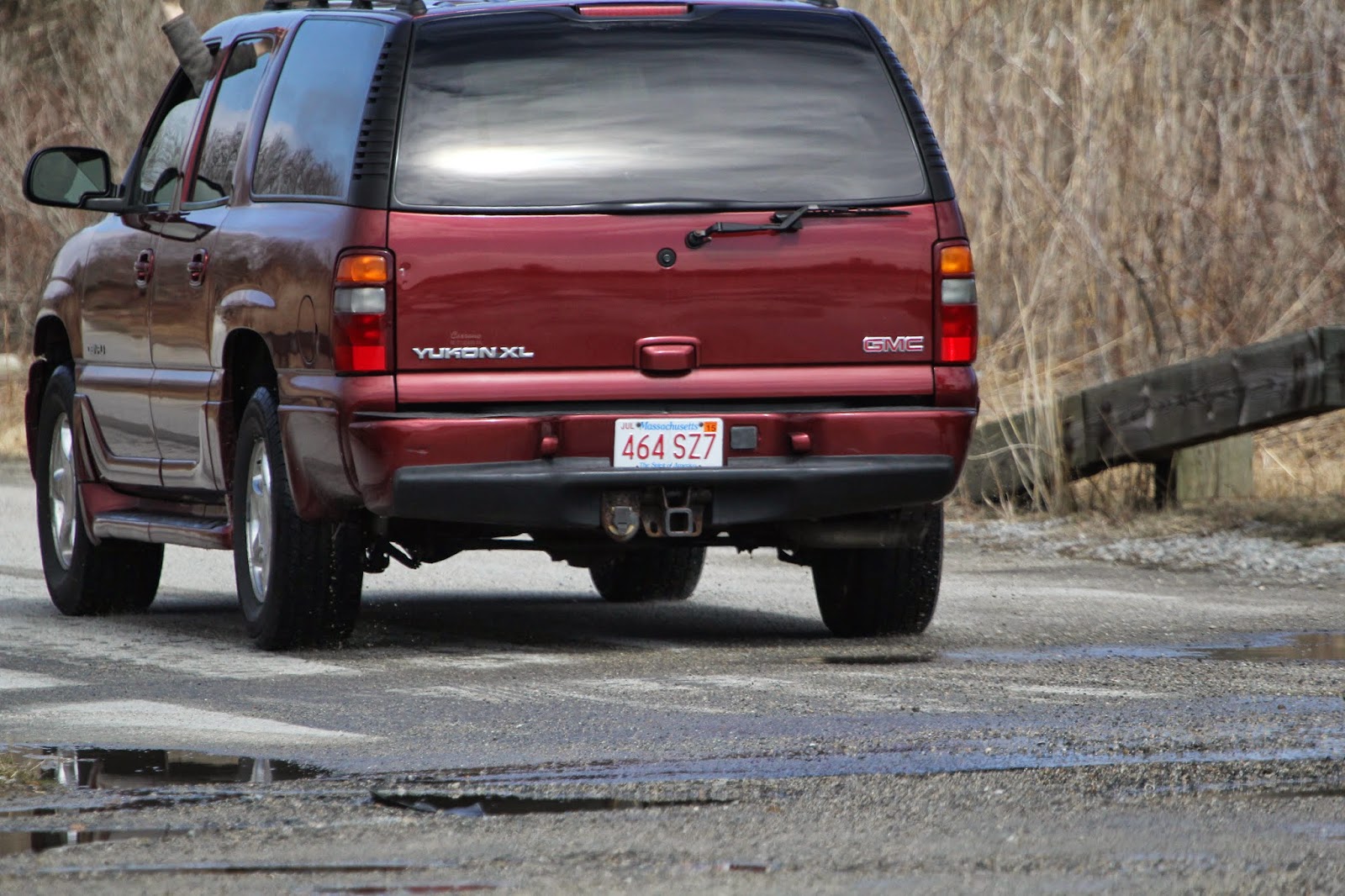 But I also got her license plate.  I wanted to follow them but Mark wouldn't let me so I just hope if we send the pictures of their car and license to Fish and Wildlife they track them down and give them a ticket.  I have to admit that even as I write this (2 days later) I still get so angry.....I know the dogs can't read and don't know what they're doing is wrong, but their owners should know better....and I think they just don't care.  JERKS!!! 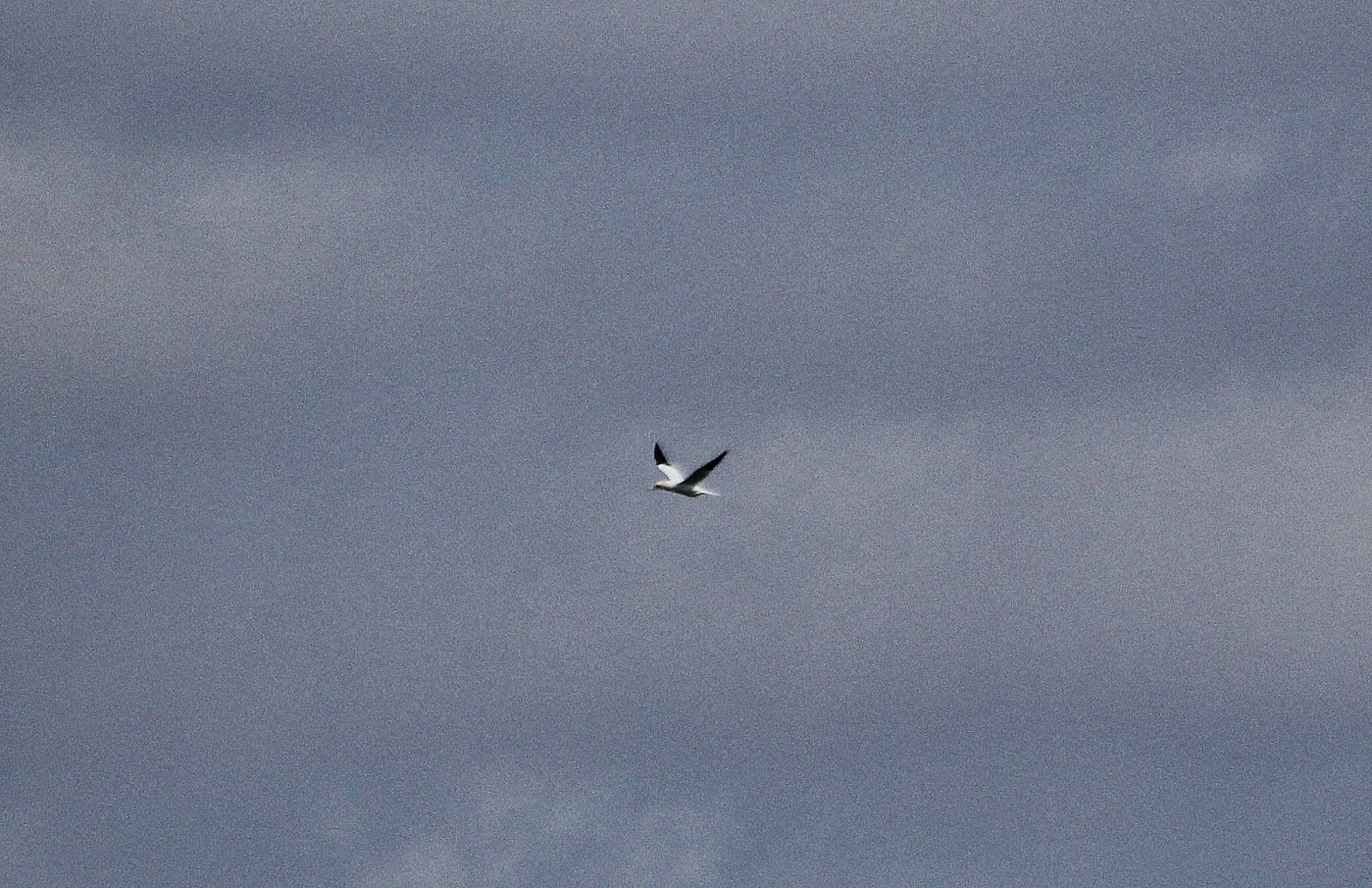 Anyway, we did do a bit more birding on West Island before we headed north.  We had an adult Northern Gannet flying around when we drove to the north part of the island.  It seemed unusual and I can't remember if we've ever had one from this location before.  These birds are usually pretty far out to sea at this time. 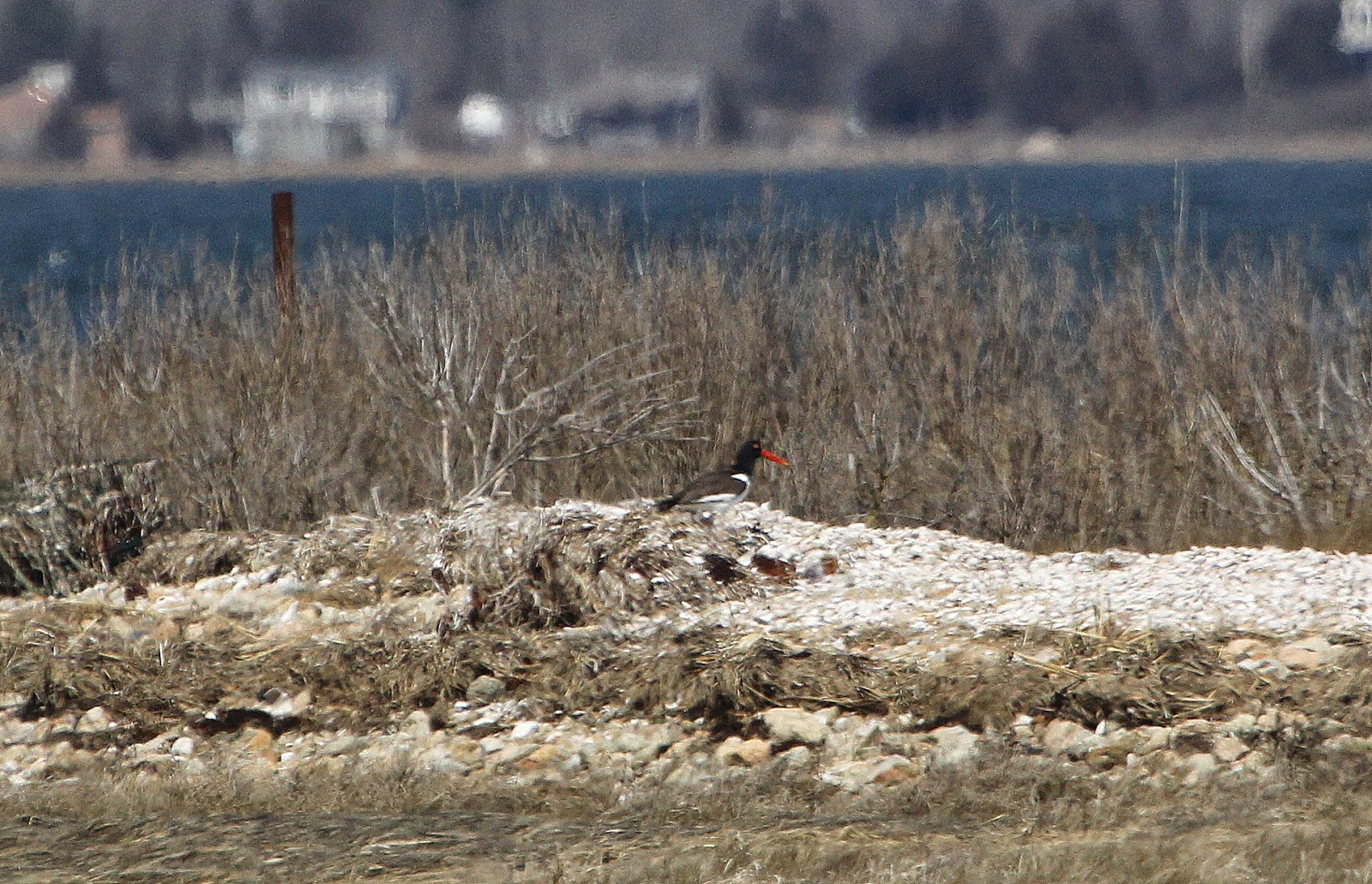 And we had another Oystercatcher.  This one seemed to be alone and I got a chance to snap some photos before he took off.  I'm always amazed by the color of their bill.

Instead of going right home we decided to head up to Rochester to check on the Purple Martins we had found when we did the breeding bird atlas work.  We had some nice looks at Tree Swallows, but I don't think the martins were back yet....at least we didn't have any.  We did, however, have a Peregrine Falcon come bombing through with a Killdeer in his talons.  In fact I think it was the Killdeer Mark had just counted less than 5 minutes earlier.

On the way home we checked on the Purple Martin colony and Rehoboth, but didn't see any birds there either.  We heard reports of them in Lakeville, so it should be any day now that they're back in both these locations.