We headed up to Winchendon to bird Otter River SP and, hopefully, find an early, unusual dragonfly.  What a disappointment to find the gates closed and locked!  I even saw a patch of snow!!!  Anyway, my backup plan was to head down to New Salem and Petersham and hike in Gate 33, do the Women's State Forest and Tom Swamp.  Always nice to see actual wild flowers out....this Trailing Arbutus was all along the edge of the road on the marsh side as we walked through the gate. 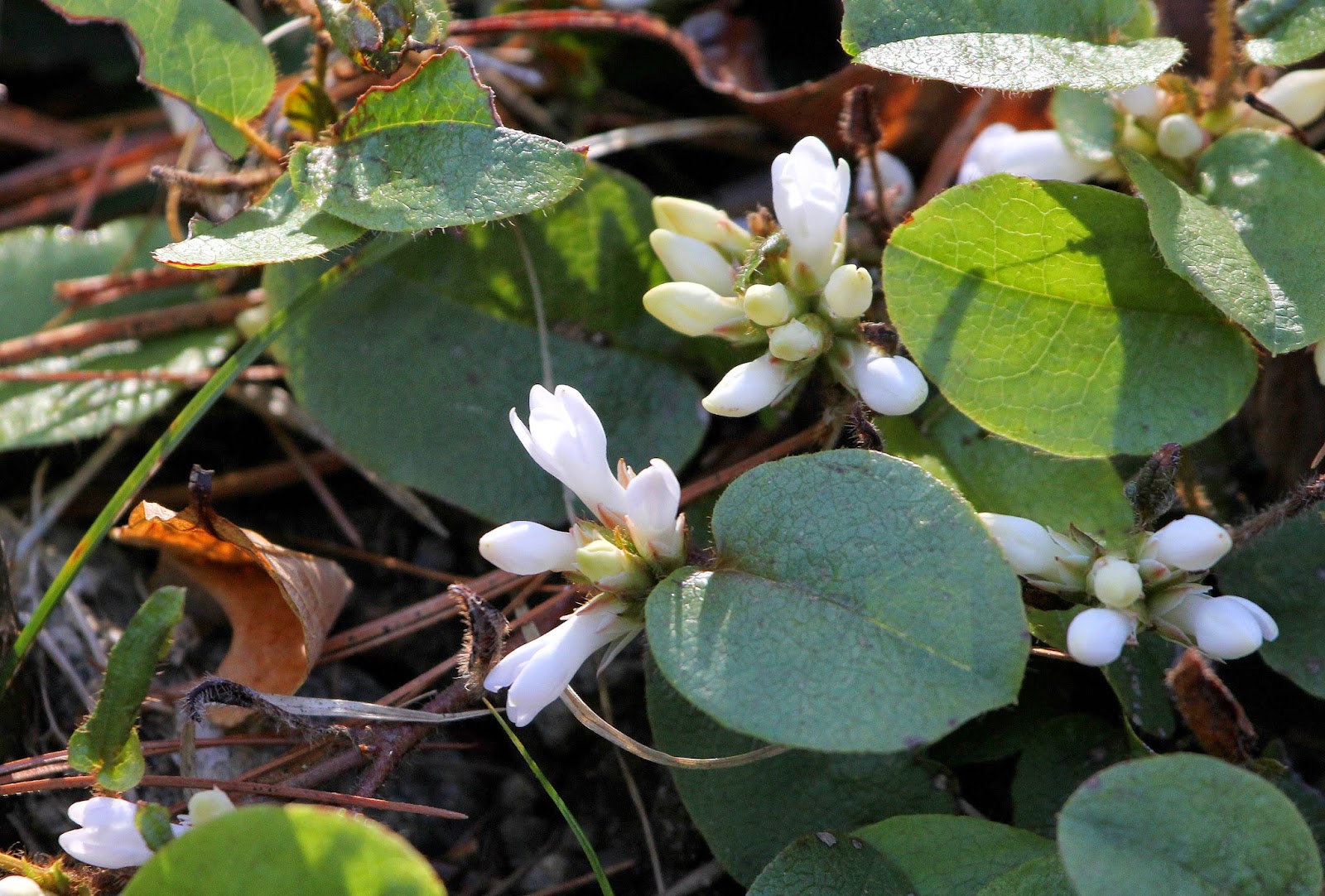 At Bassett Pond we had a pair of Hooded Mergansers who were definitely interested in finding a nice nesting hole. 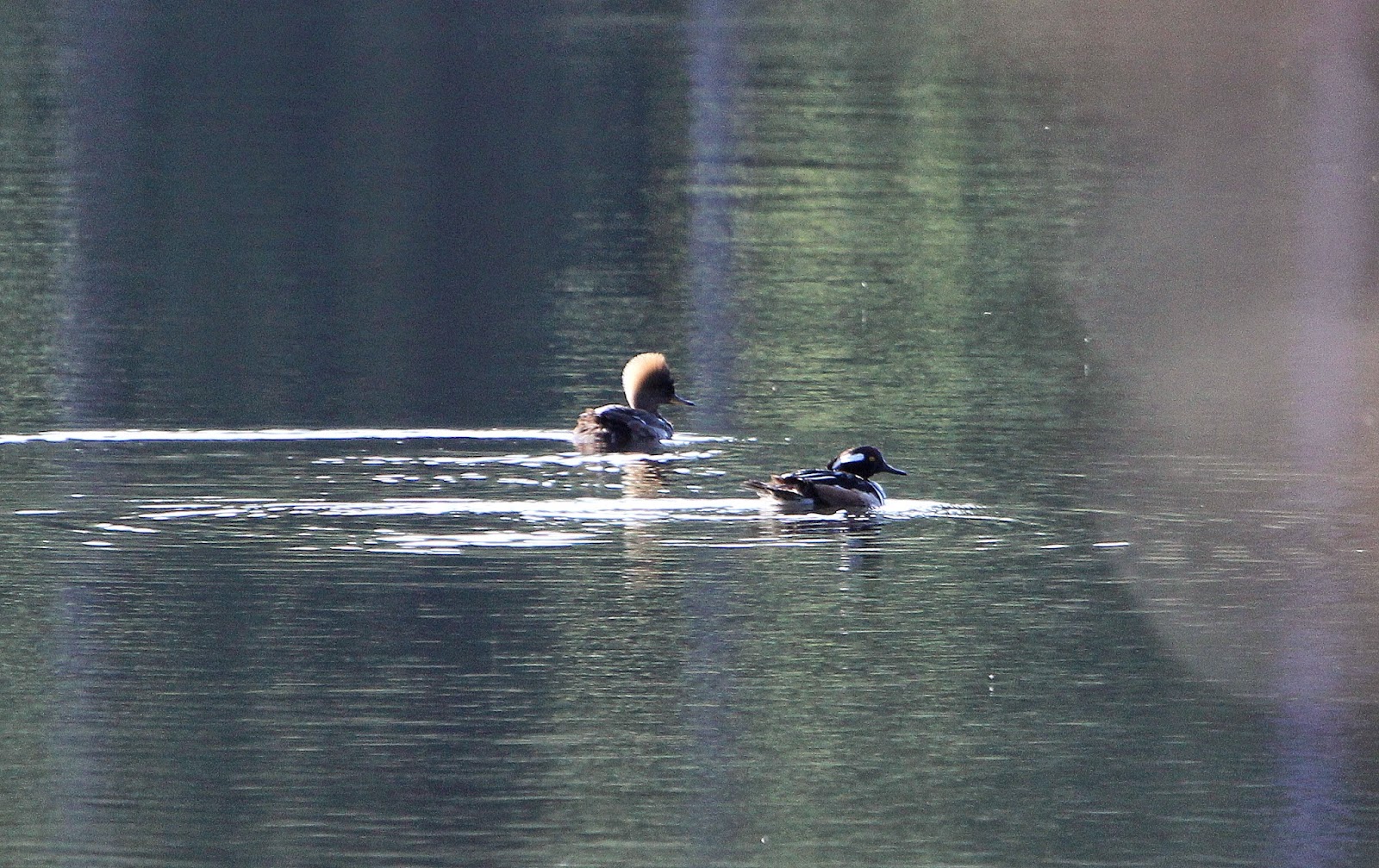 And just before the power lines there is a path on the left that leads to a small clearing where you can find this structure from the original town of Bassettville that was located here.  Looks like some sort of root cellar, but I need to do a bit of research to find out more.  Right near this area we had fresh bobcat scat and I wondered if occasionally a bobcat would use this area 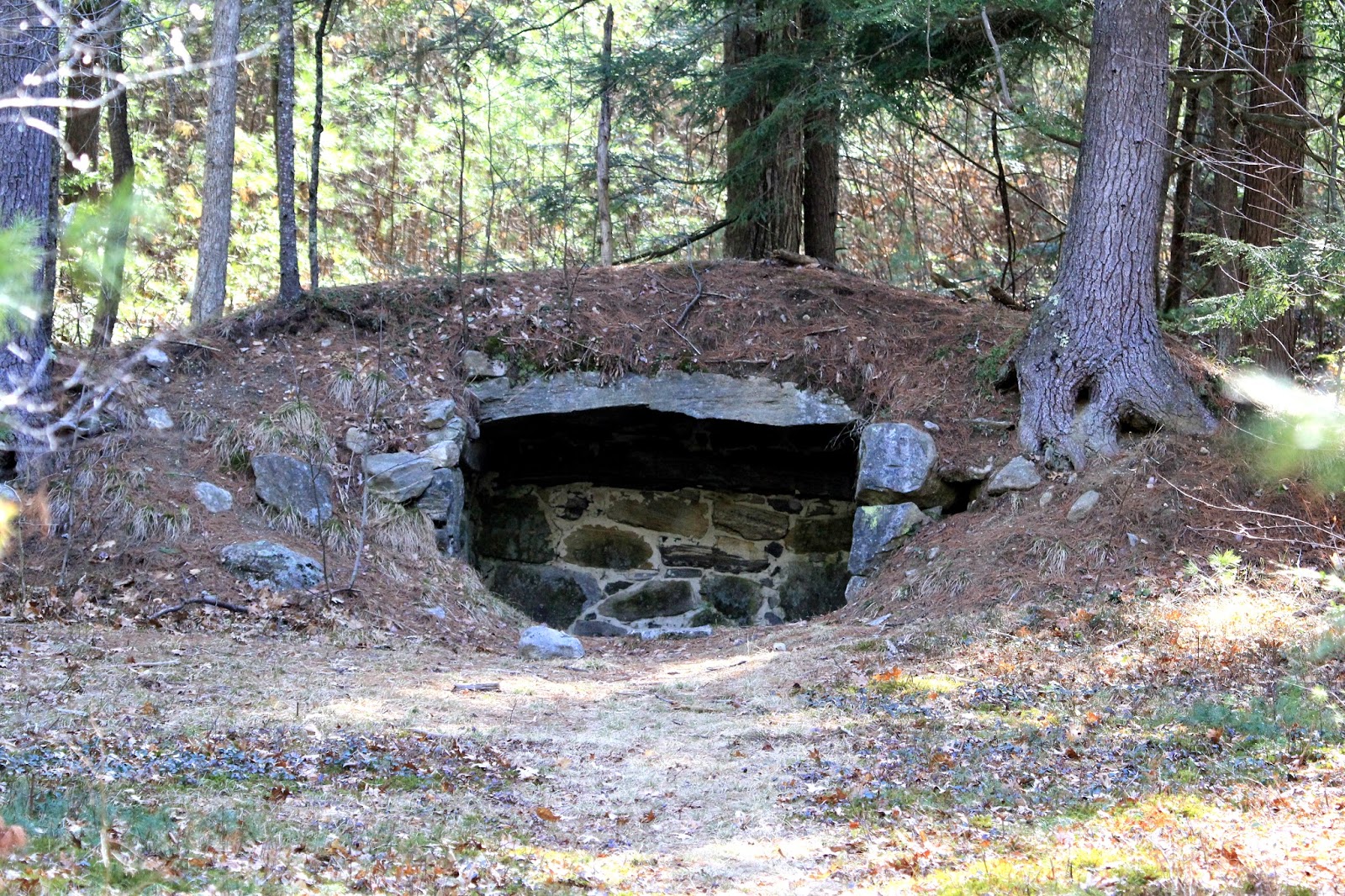 While I was expecting to run into some fishermen, I did not anticipate running into a group of high school students.  They were taking a class on "tracks" at The Winchendon School, which is a private boarding school in Winchendon....they, too, must have come to Quabbin since Otter River was closed! 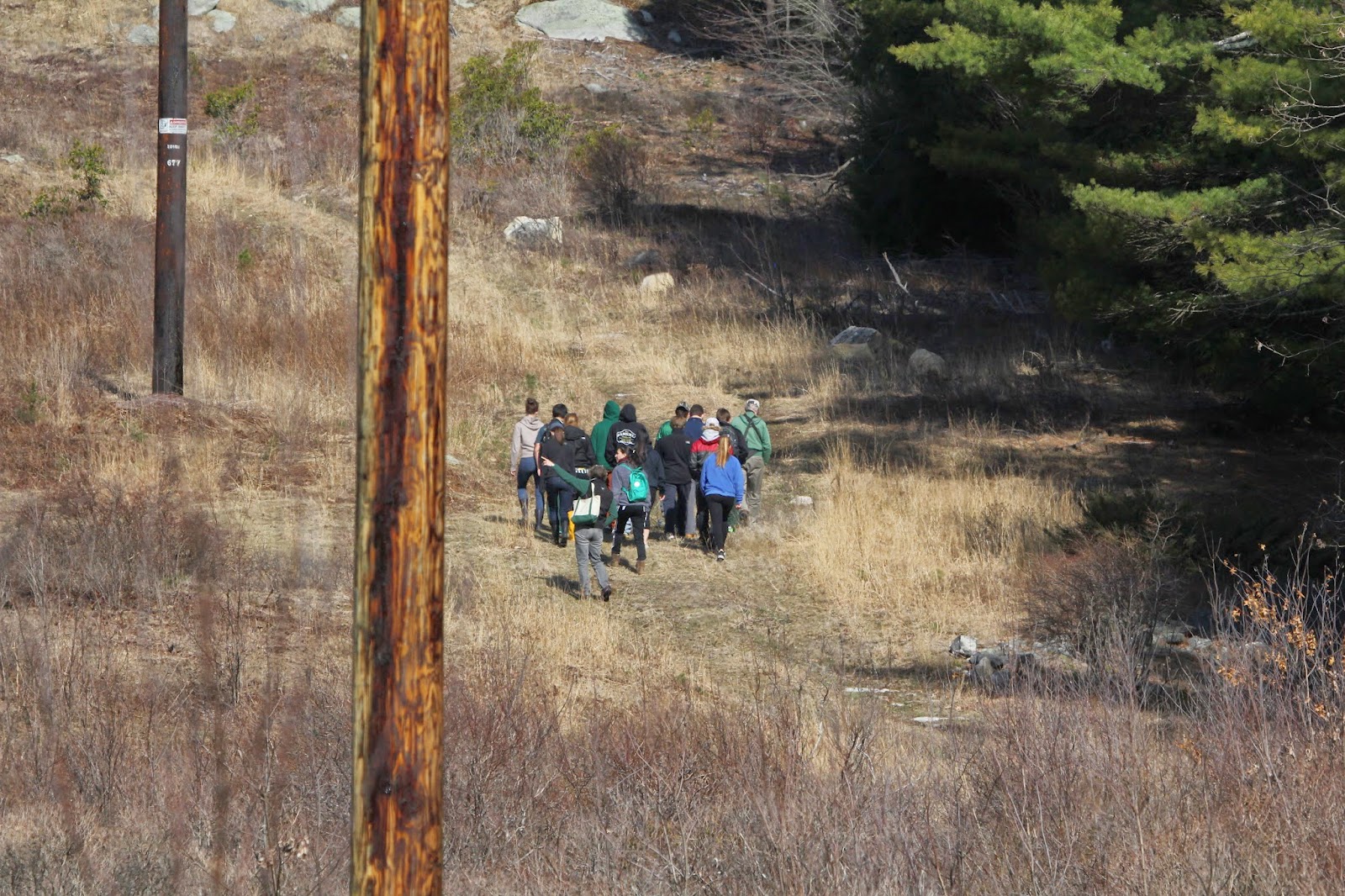 One of the more numerous birds of the trip was the Yellow-bellied Sapsucker...we heard their distinctive drumming everywhere.  While we've always had these woodpeckers breeding in Quabbin, this year it seems like there are more than every...or maybe we're just out more and at the right time to hear them. 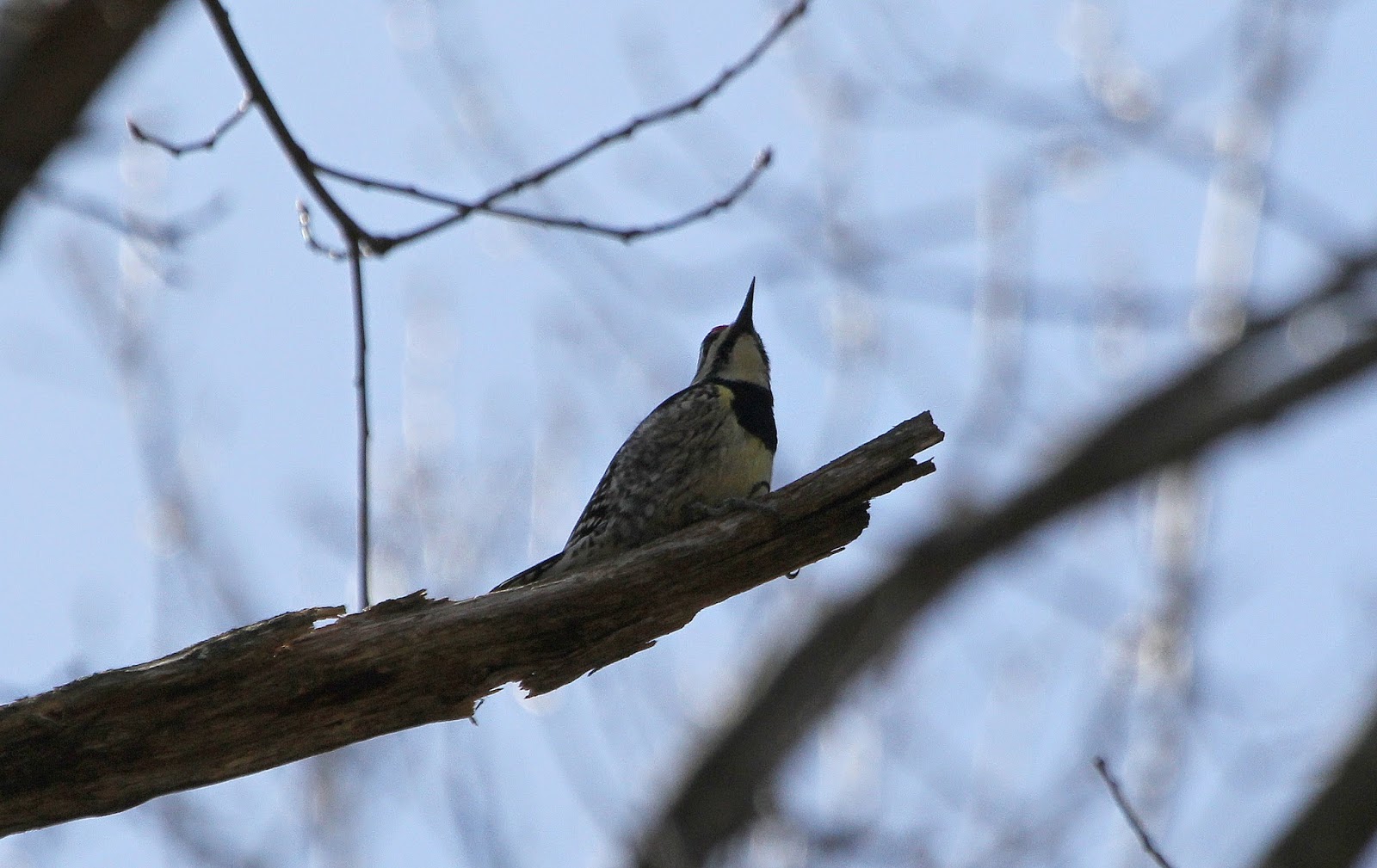 On the way out we stopped again at Bassett Pond and since it had warmed a bit we did have Painted Turtles out sunning themselves on the logs. 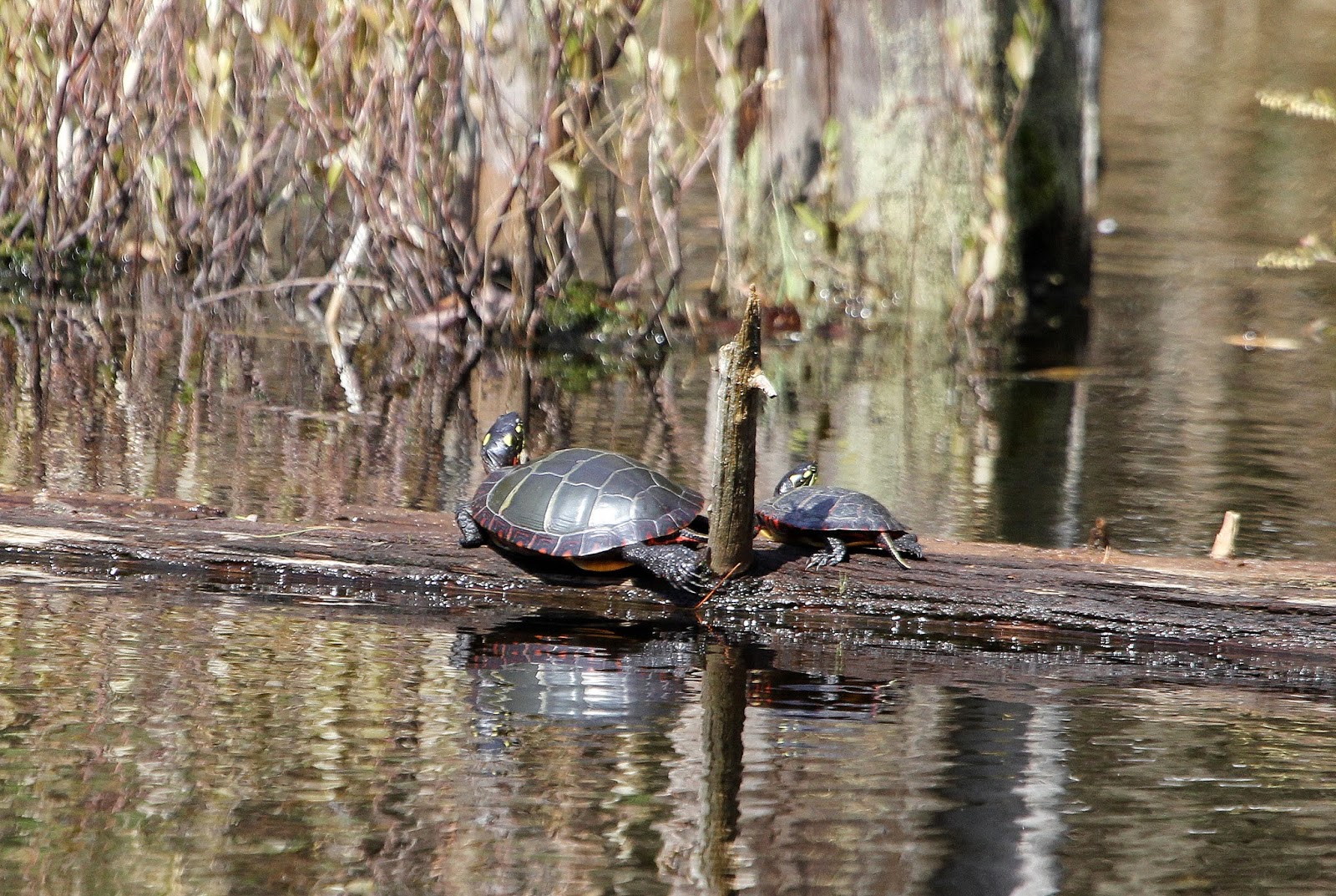 And we started to get butterflies as well.  While I had one Mourning Cloak fly by, there were at least 6-8 Spring Azures.  The family of butterflies is rather complex, with several known color forms and subspecies. 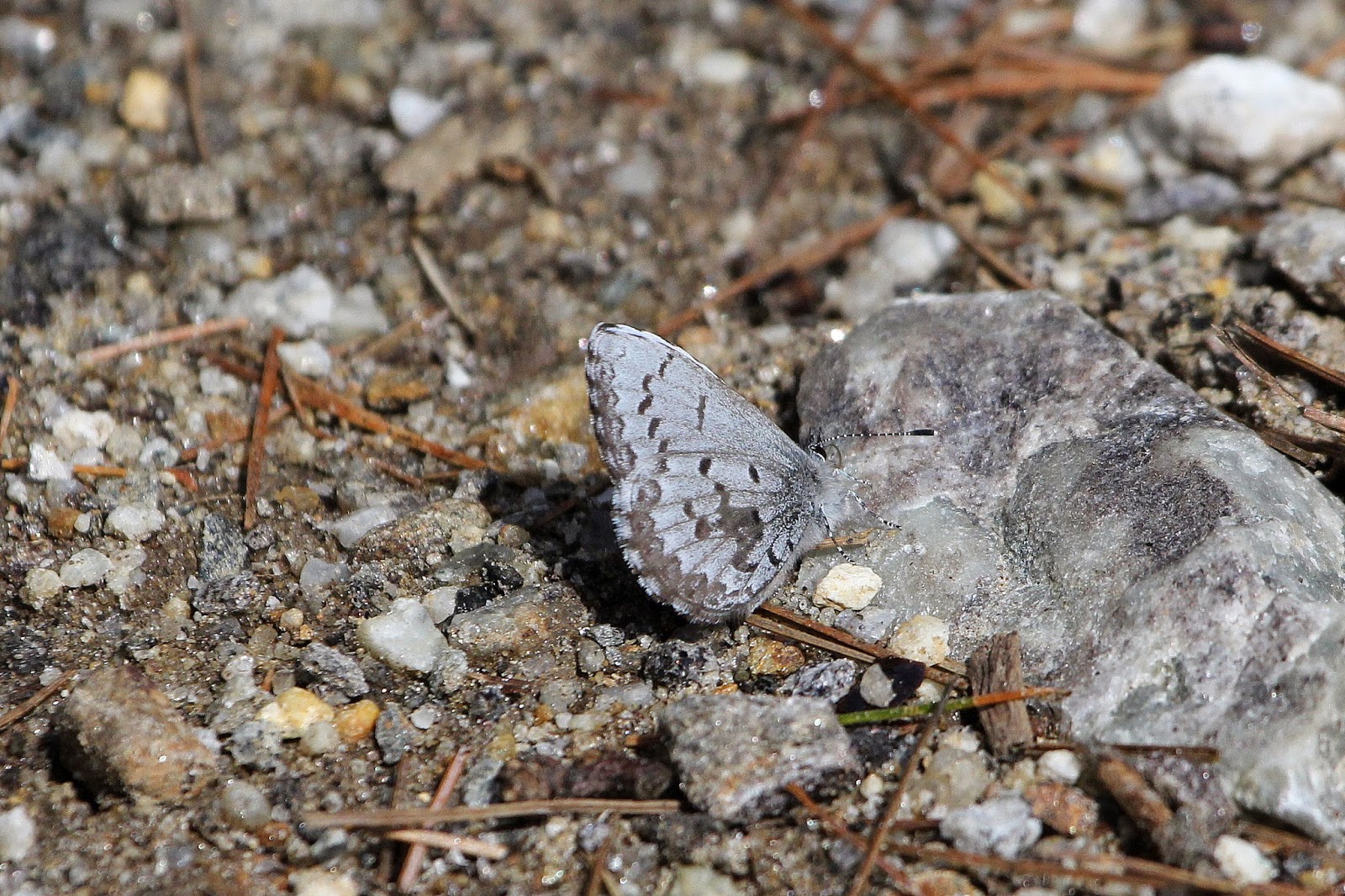 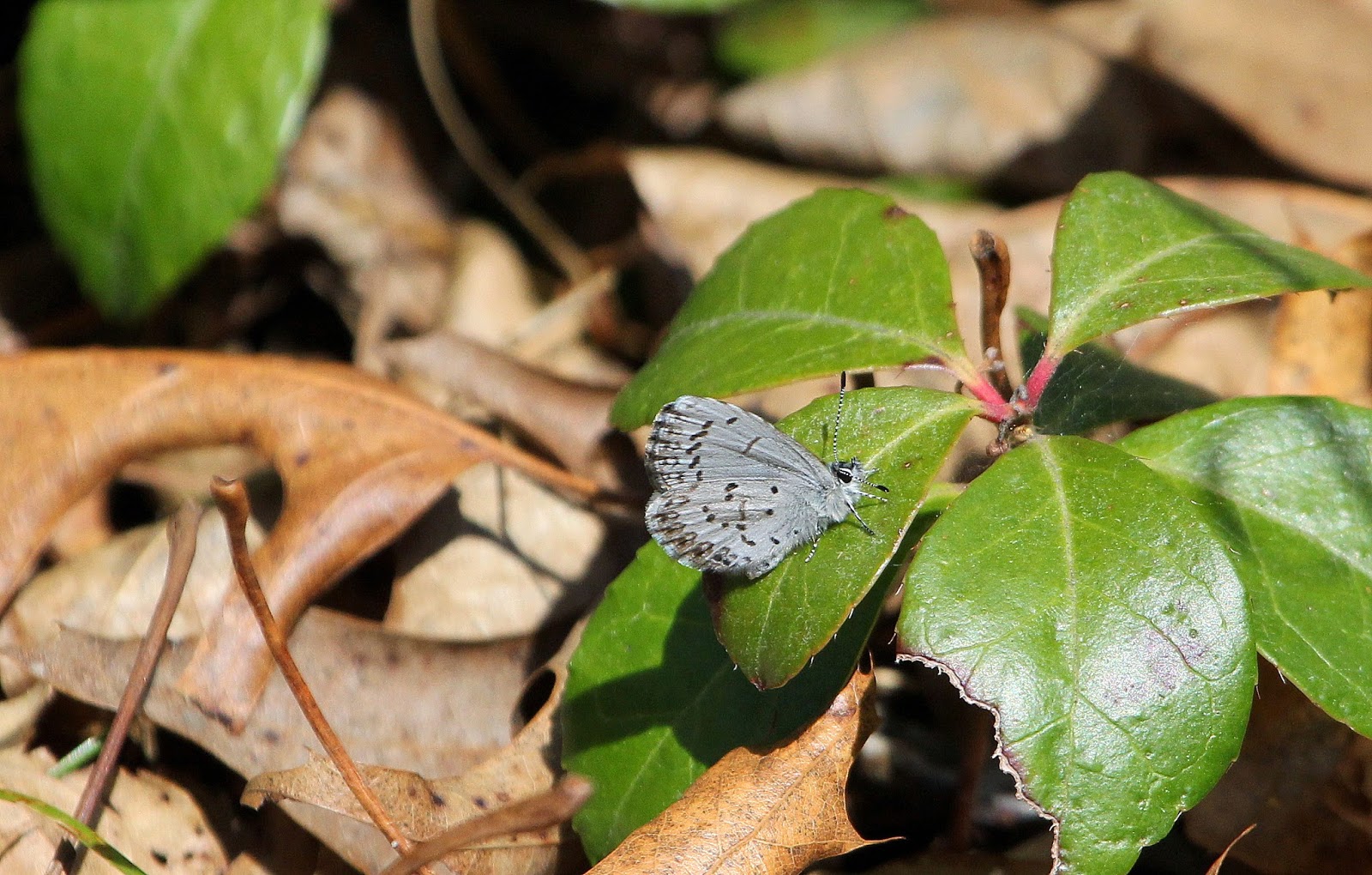 After leaving Gate 33, we made a quick stop in the Women's State Forest.  The road is still signed as being closed to vehicular traffic due to logging operations...but the sign also says that it is expected to re-open at the end of March so not sure it it's open and they just haven't taken the sign down or if there are just that late.  In any event we decided to move on to Tom Swamp and enter from the north since we weren't sure what condition the road leading in from the west would be in.  Surprisingly the causeway was fairly dry, although the big puddle at the eastern end looks to be problematic still.  In fact Mark got a bit stuck in the mud when he tried to cross on the northern side.  He eventually made it and wandered down the road looking for dragonflies. 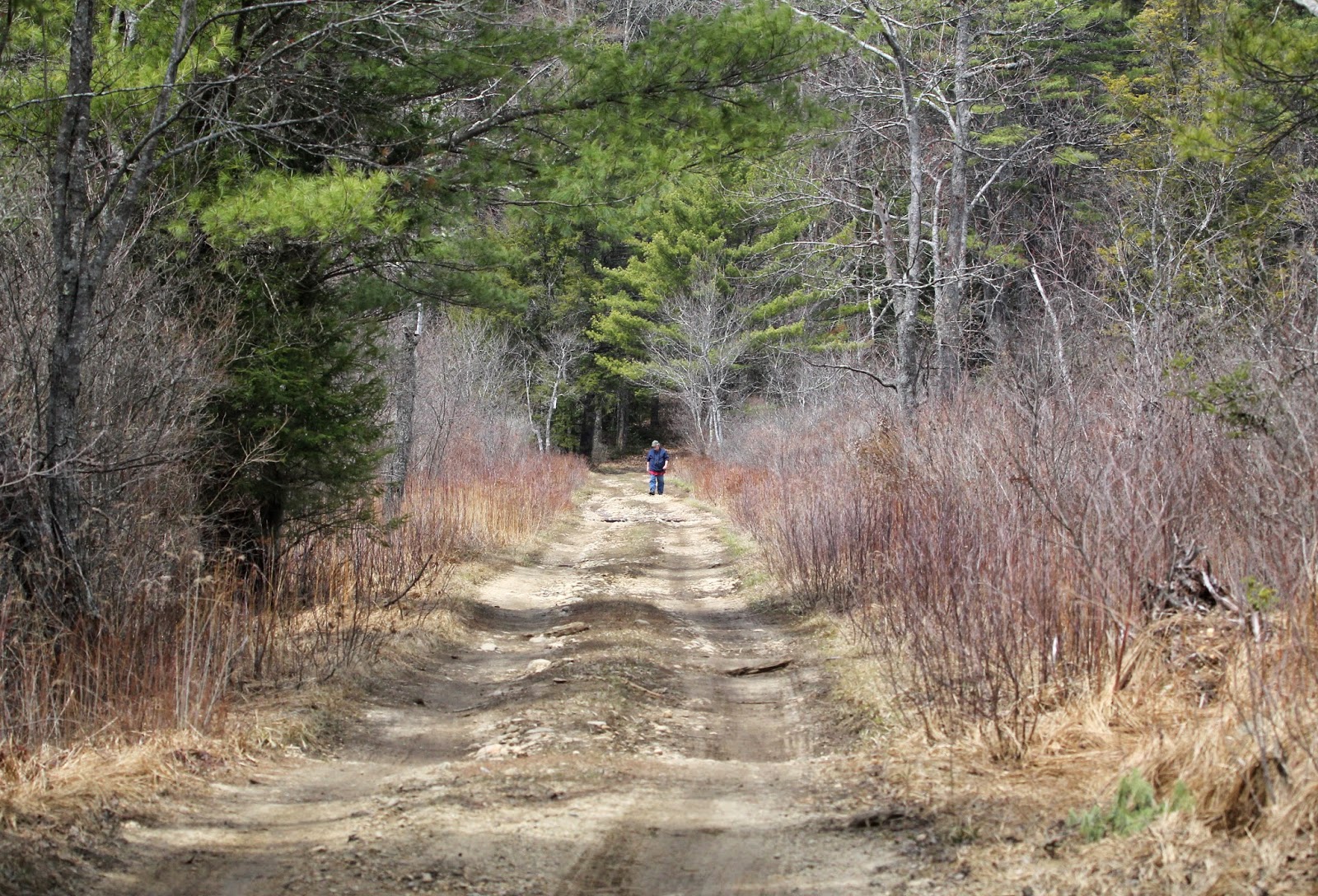 While we continue to dip on those damn insects, we did have some nice salamander tracks in several of the muddy spots on the road.  Given that the area is one big boggy marsh, we were wondering if these could have been made by the Four-toed Salamander....although the tracks didn't provide us with enough detail to make that sort of call.  Still a nice photo I can add to my catalog of "tracks".....although I wonder if that class from the Winchendon School would have found these as interesting as the moose and bobcat tracks they were finding. 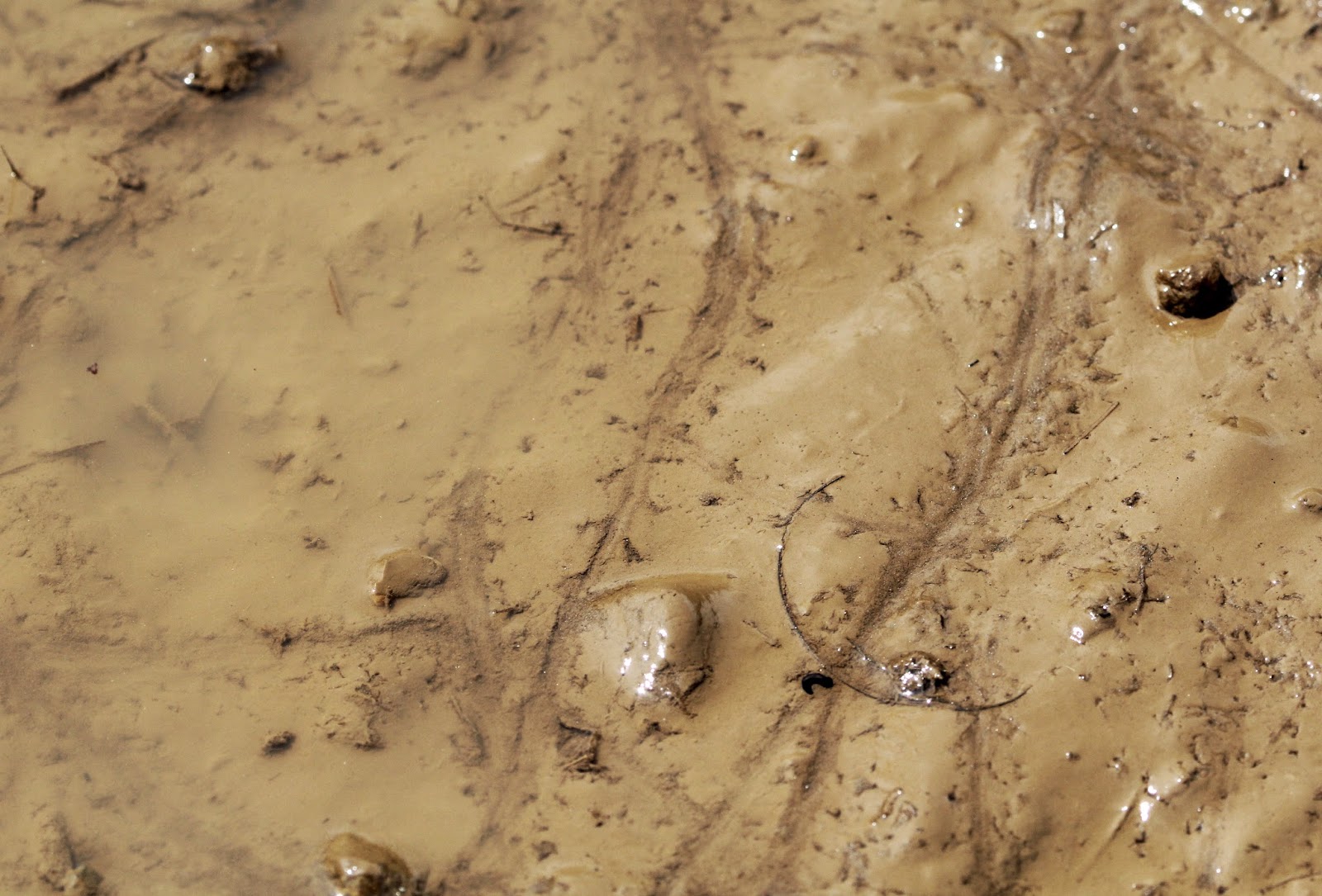 Rather than re-trace our route from the north, we were able to drive the road out to the east and Rt. 32 in Petersham.  Along the way we had a number of Hermit Thrushes, which were very quiet as they foraged through the understory.  It was much quieter than we had hoped, with only one Blue-headed Vireo, a few gnatchatchers and a smattering of Pine and Yellow-rumped Warblers. 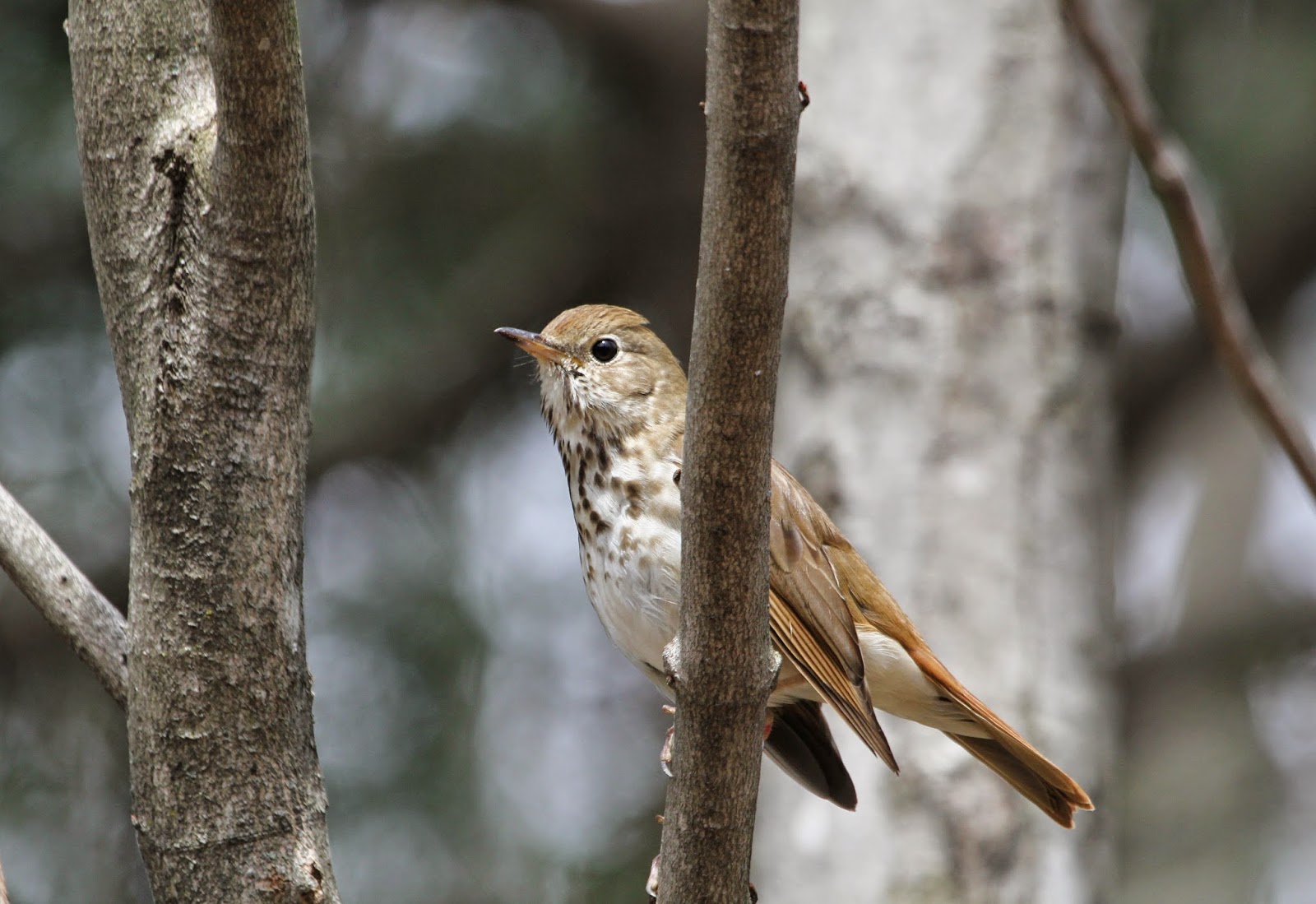 We then did a small hike into Petersham's North Common Meadows, which is a wonderful place for butterflies in summer.  There's a small pond where we've had dragonflies as well....but that, too, was in late summer.  A short walk through the woods brings you to a bench overlooking this memorial stone which pretty much describes how people in Petersham feel about their home town.  And it is pretty special... 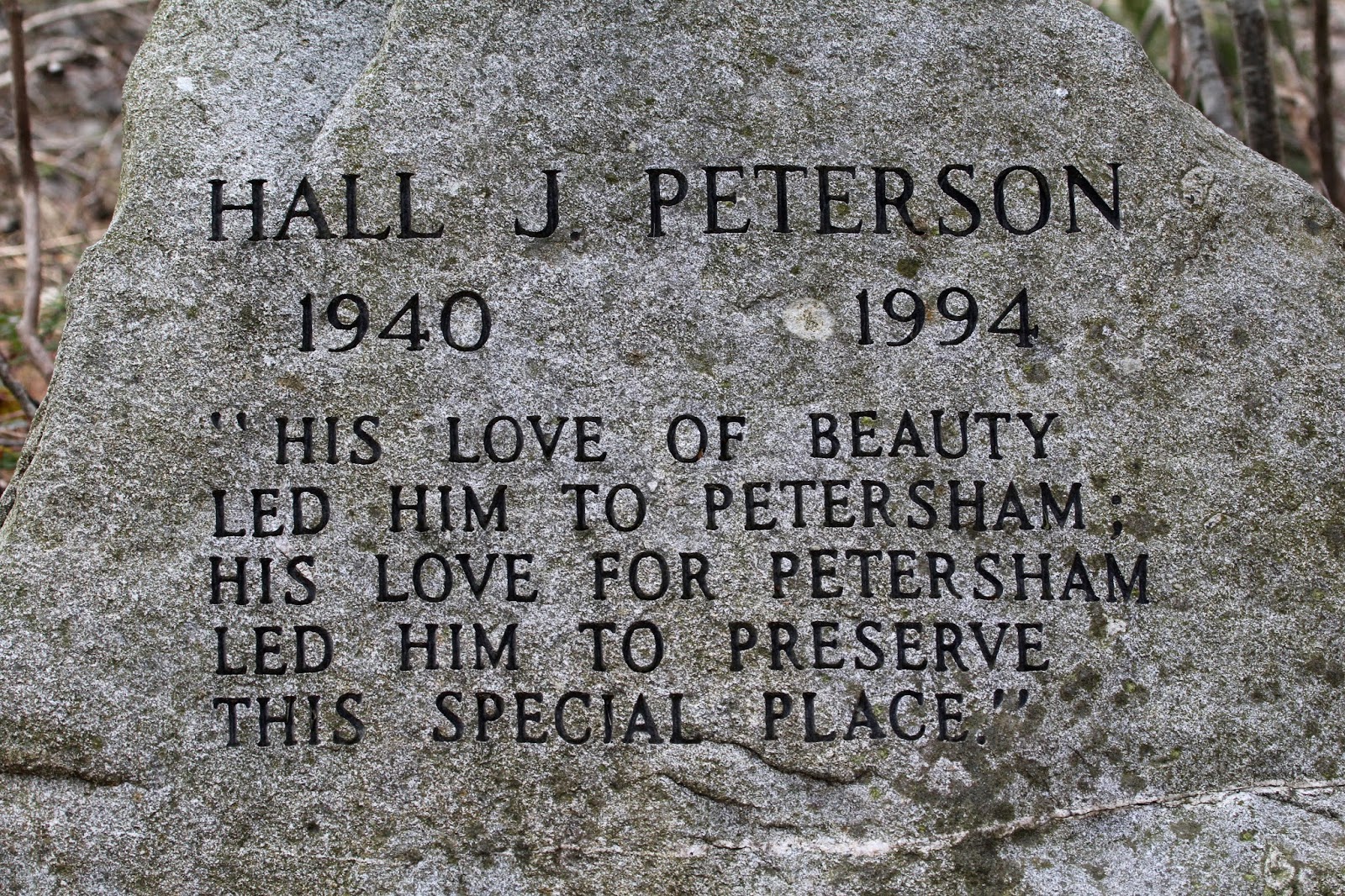 At the East Street Cemetery we had a good number of Yellow-rumped Warblers working the trees at the back of the cemetery by the pond. 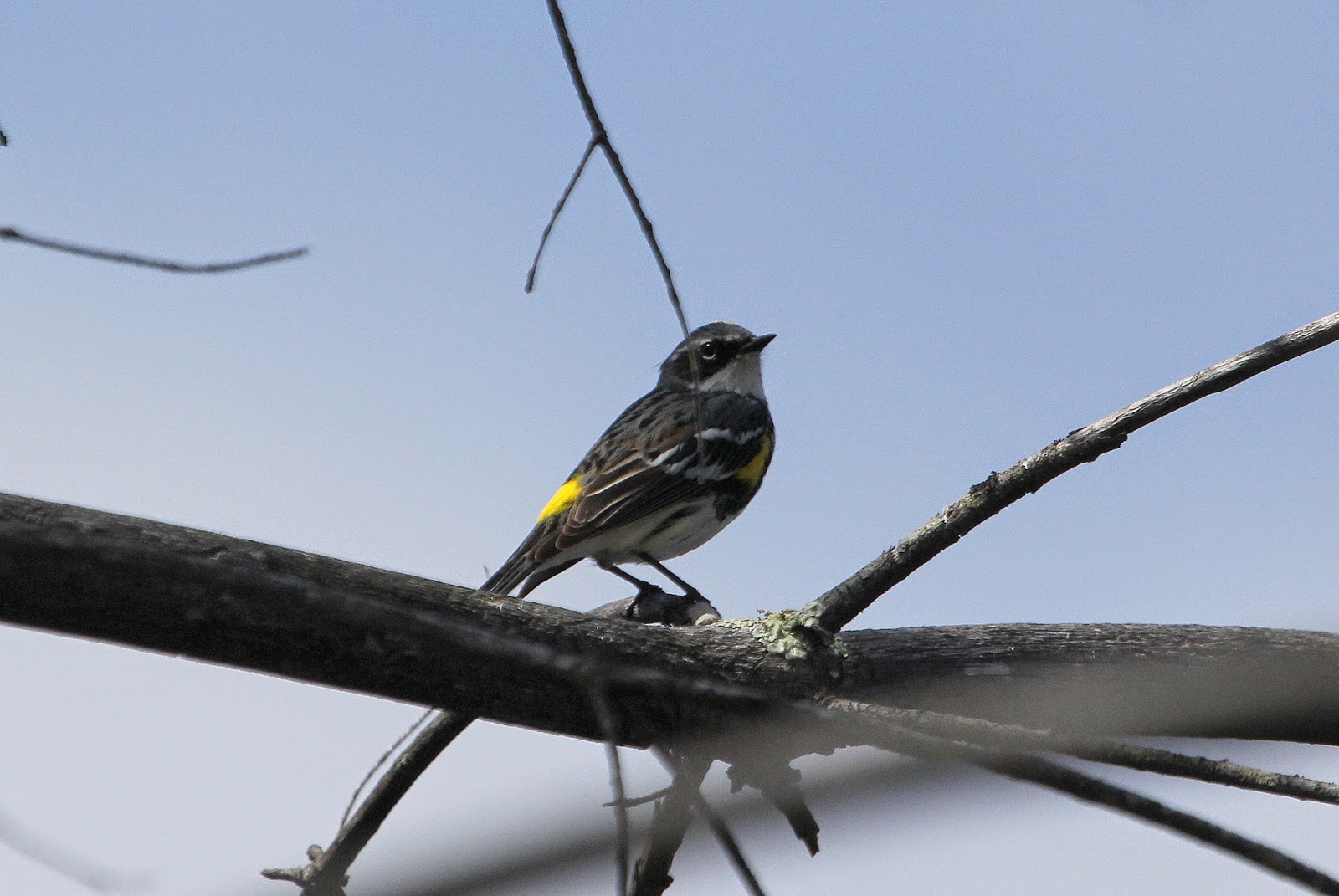 We also had a small group of female Common Mergansers (below) and female Hooded Mergansers in the pond.  Seems like a good area for both these species to nest, but I doubt that all seven females would find suitable nesting habitat.  In fact it looks most appropriate for the Hoodies rather than the Commons. 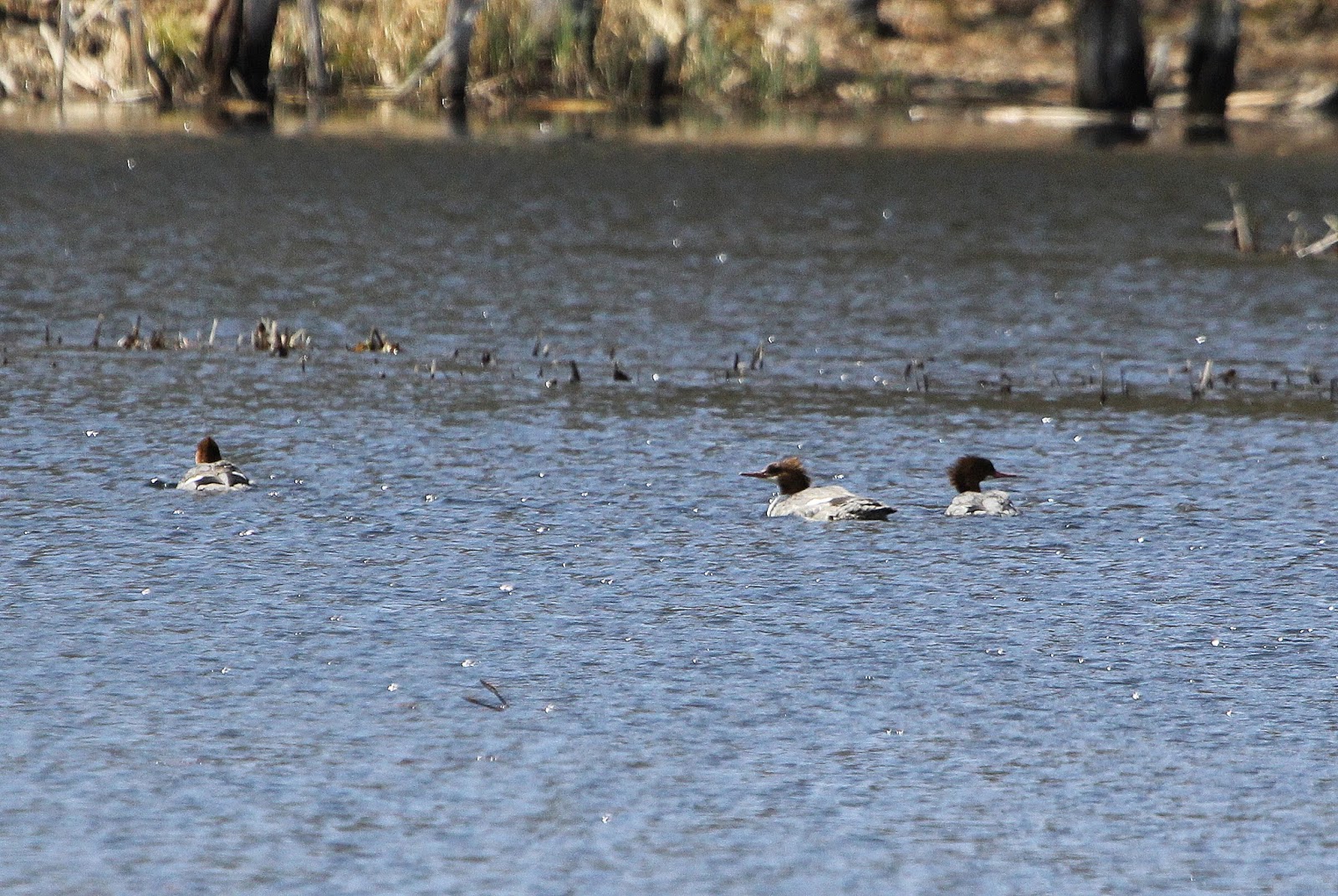 We took Quaker Road back out to Rt. 122 so we could check along Brook's Woodland Preserve for dragonflies...and it was along this road that we had our first Coltsfoot of the spring. 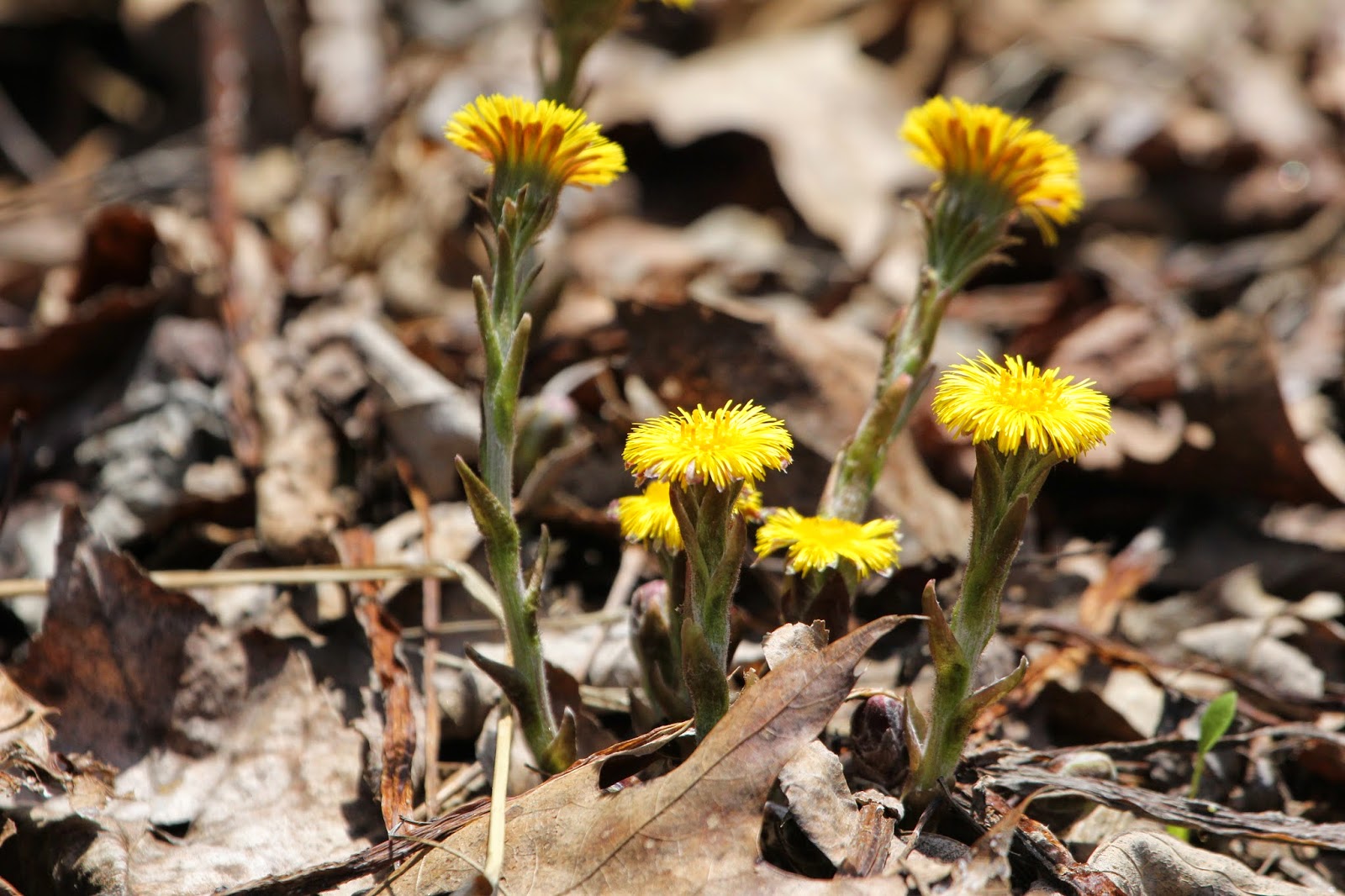 This member of the sunflower family has a reputation of being a cure for coughs.  And an extract of fresh leaves can be used for making cough drops...who knew. 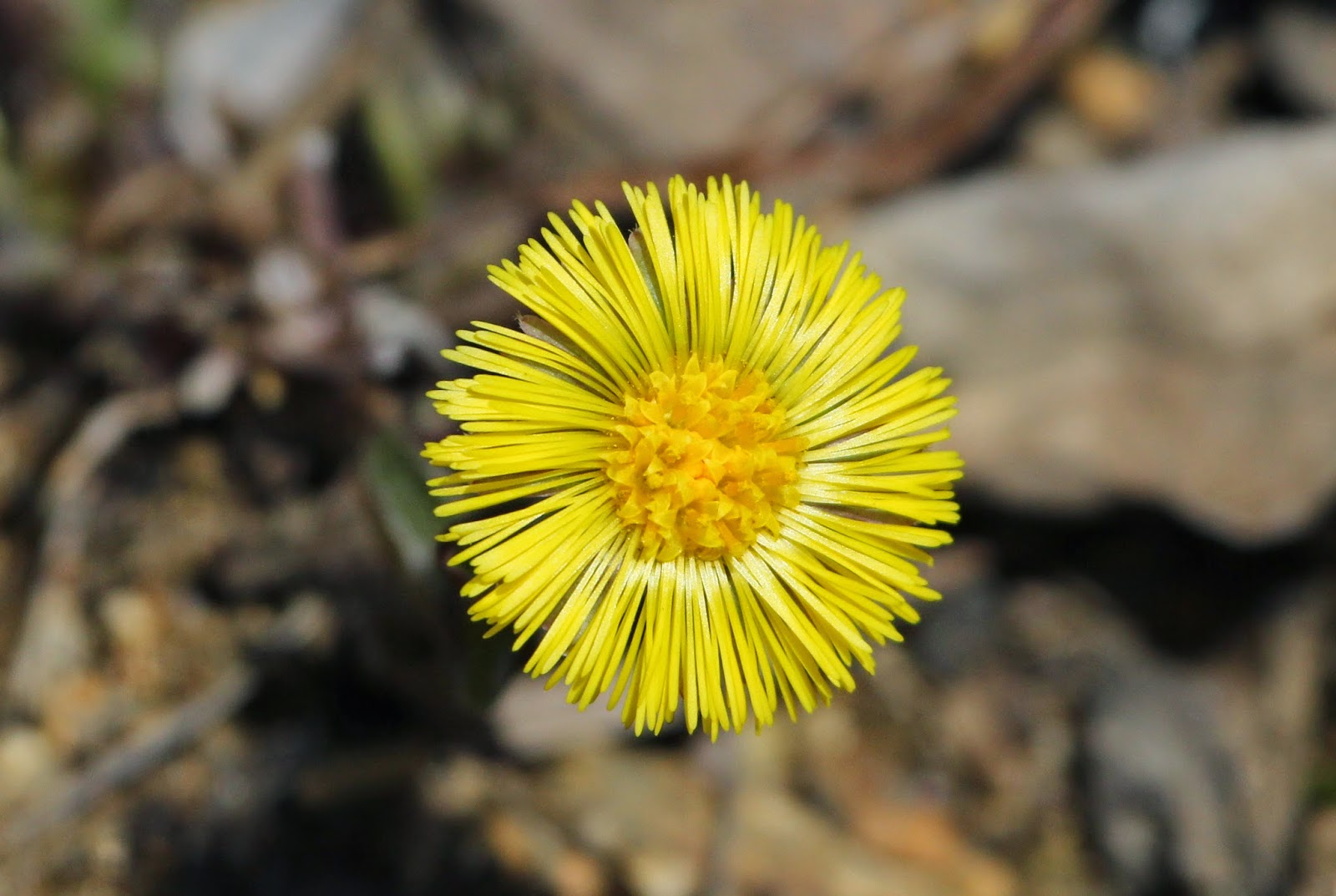 As we headed back to Worcester from this wonderful area, we found that the major gates into Rutland State Park had been opened.  Since it was already past prime birding time, we did a quick drive through to check on the roads, with a stop at a side marsh to look for Bridled Shiner (which were there.)  Depending on weather we hope to get back to the park for some serious birding soon.

Enjoy....Sheila
Posted by Sheila Carroll at 5:38 AM