We juggled schedules around this week so that we could take a leisurely trip to the southern Berkshires.  We started out in Sandisfield, moved on to New Marlborough, then to Sheffield with a final stop in Egrement.  At this point I should let you know there is one very graphic photo from Sheffield.  It is pretty gross and if I had a rating on this blog, I would give it at least PG-14.  But let's get back to the beginning of the trip first..... 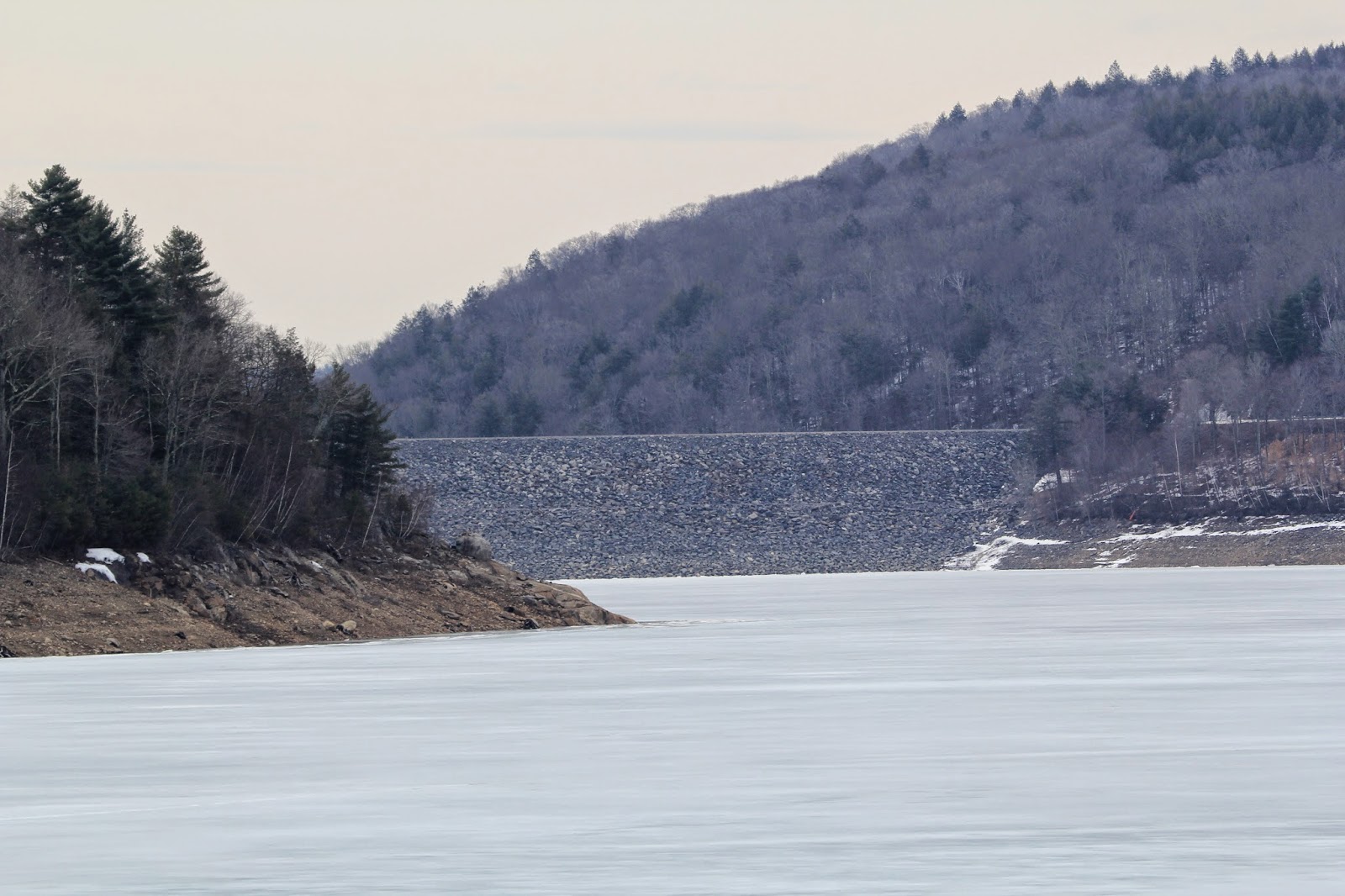 Unfortunately the southern end of the Farmington River (really over the border in CT) was frozen.  The road along the river in Sandisfield had not yet been opened in the MA section, so we really didn't spend much time there. 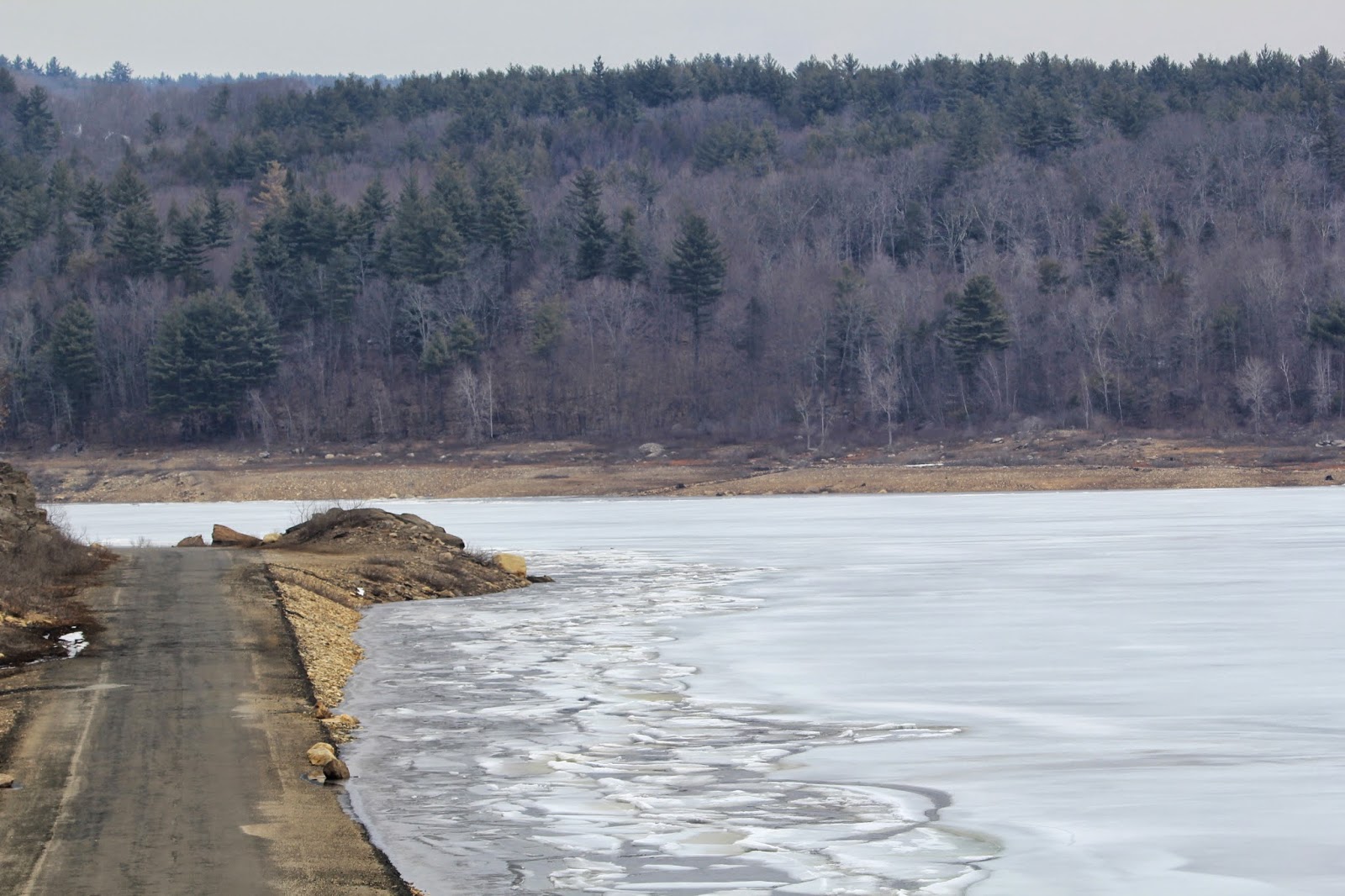 Our next stop was to check for Sandhill Crane in New Marlborough.  But our luck really wasn't good and one of the key roads we needed to check was closed due to flooding.  As we were trying to figure where to go next Mark spotted a Turkey Vulture climbing out of a ruined shed.  This is exactly the type of habitat in which they love to nest....so we will have to go back and check it out. 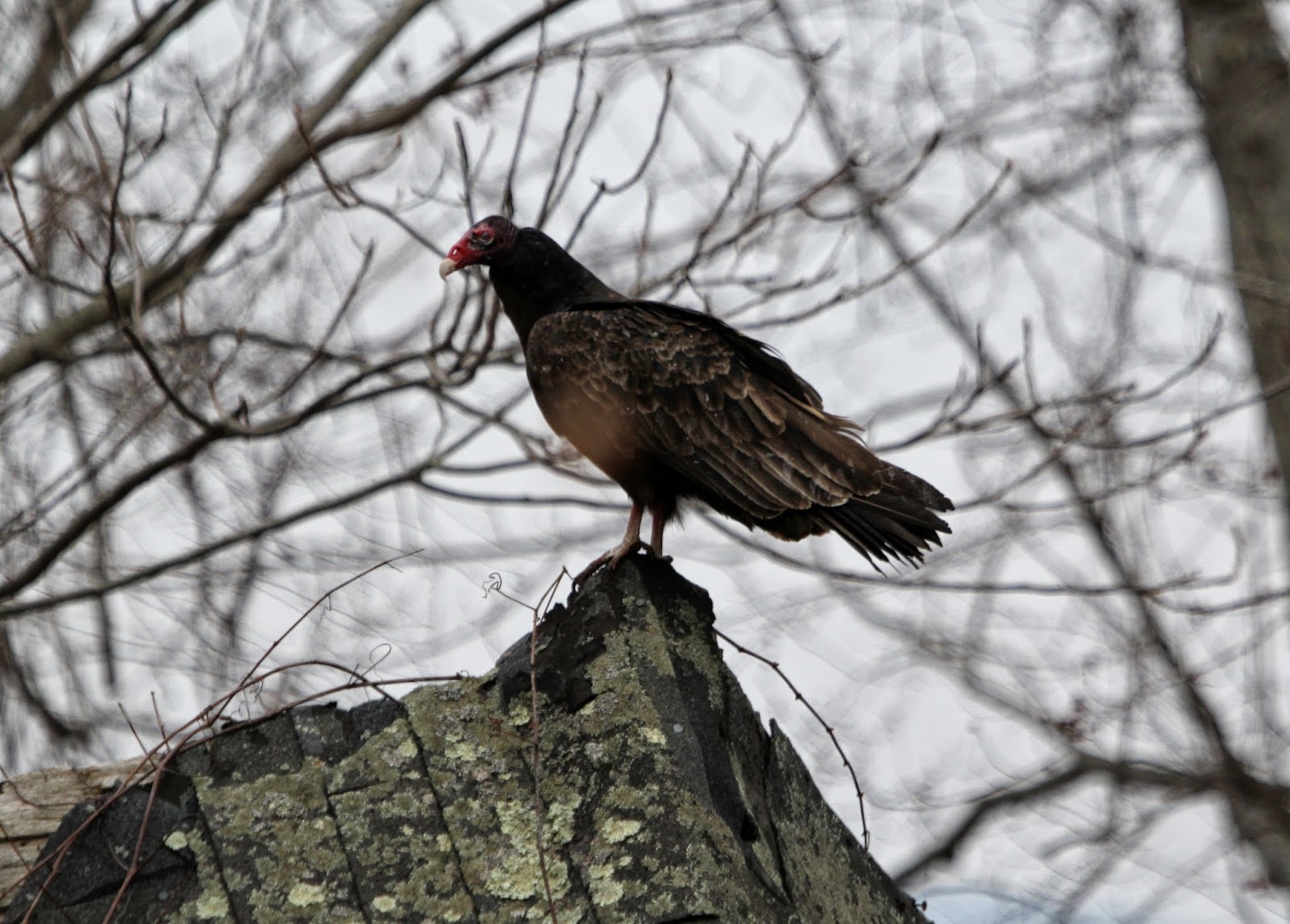 We decided to cut our losses and head over to Sheffield.  We drove the southern route through Canaan, CT and arrived in Sheffield around 10:30.  We hoped there were enough thermals to see Black Vultures up in the air.  This view from the pull off on Rannapo Road just south of Bartholomew's Cobble is the traditional spot from which to see Black Vultures.  If they're not up in the air though it's a good idea to drive through the little village of Ashley Falls and head to the CT border.  Just after crossing the river take your first right on Valley View and go right to the state line. 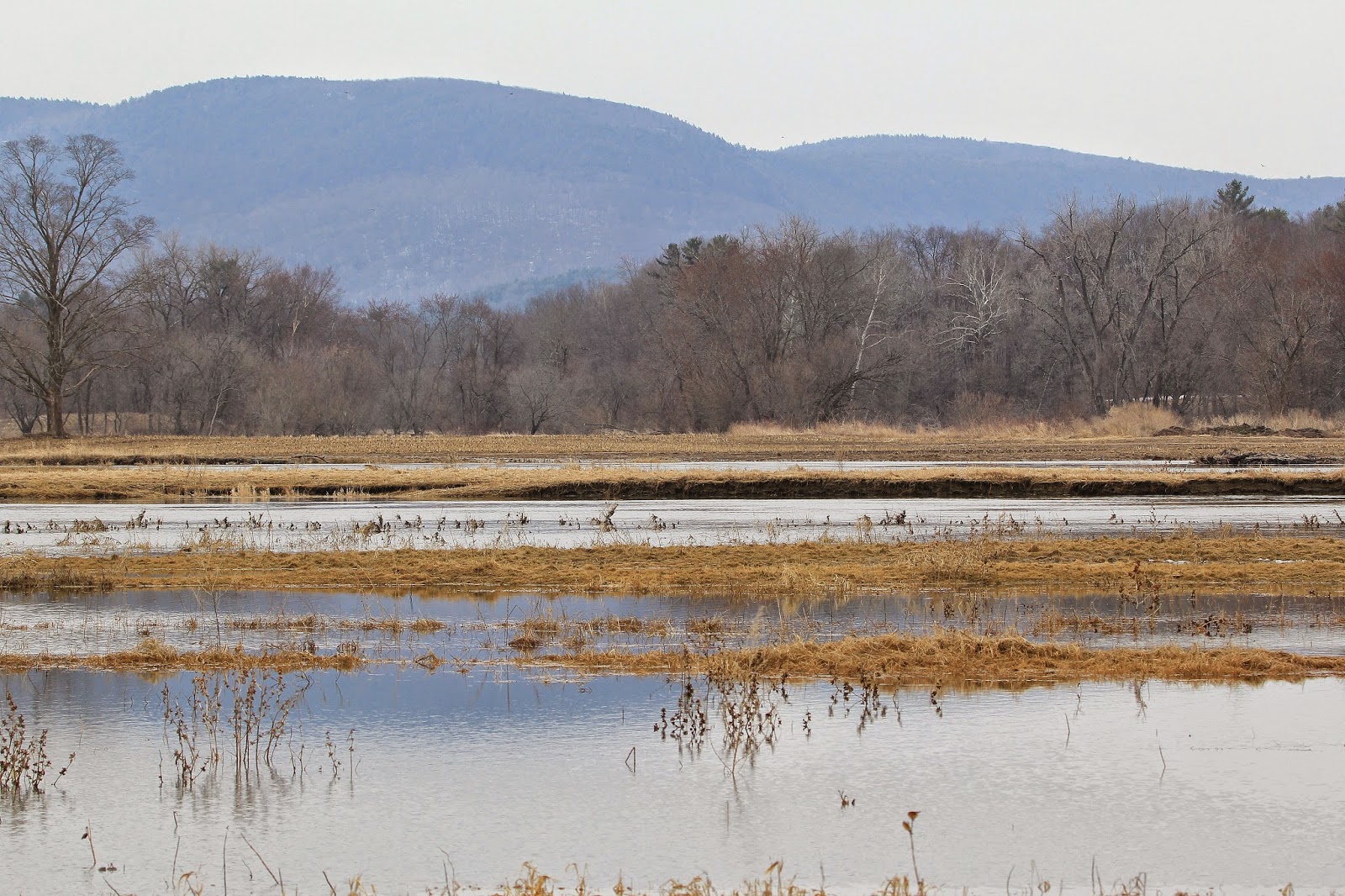 From this vantage point you can check what we call "the gut pile" to look for vultures that are feeding on the carcasses of dead cows.  As previously warned, this is the rather gross photo of several Black Vultures (and 1 or 2 Turkey Vultures) feeding on the carcasses of two dead cows.  Let's remember folks this is what vultures do.  They are the garbage collectors of the animal world....cleaning up road kills and picking the bones clean at those places where farmers dump their dead livestock. 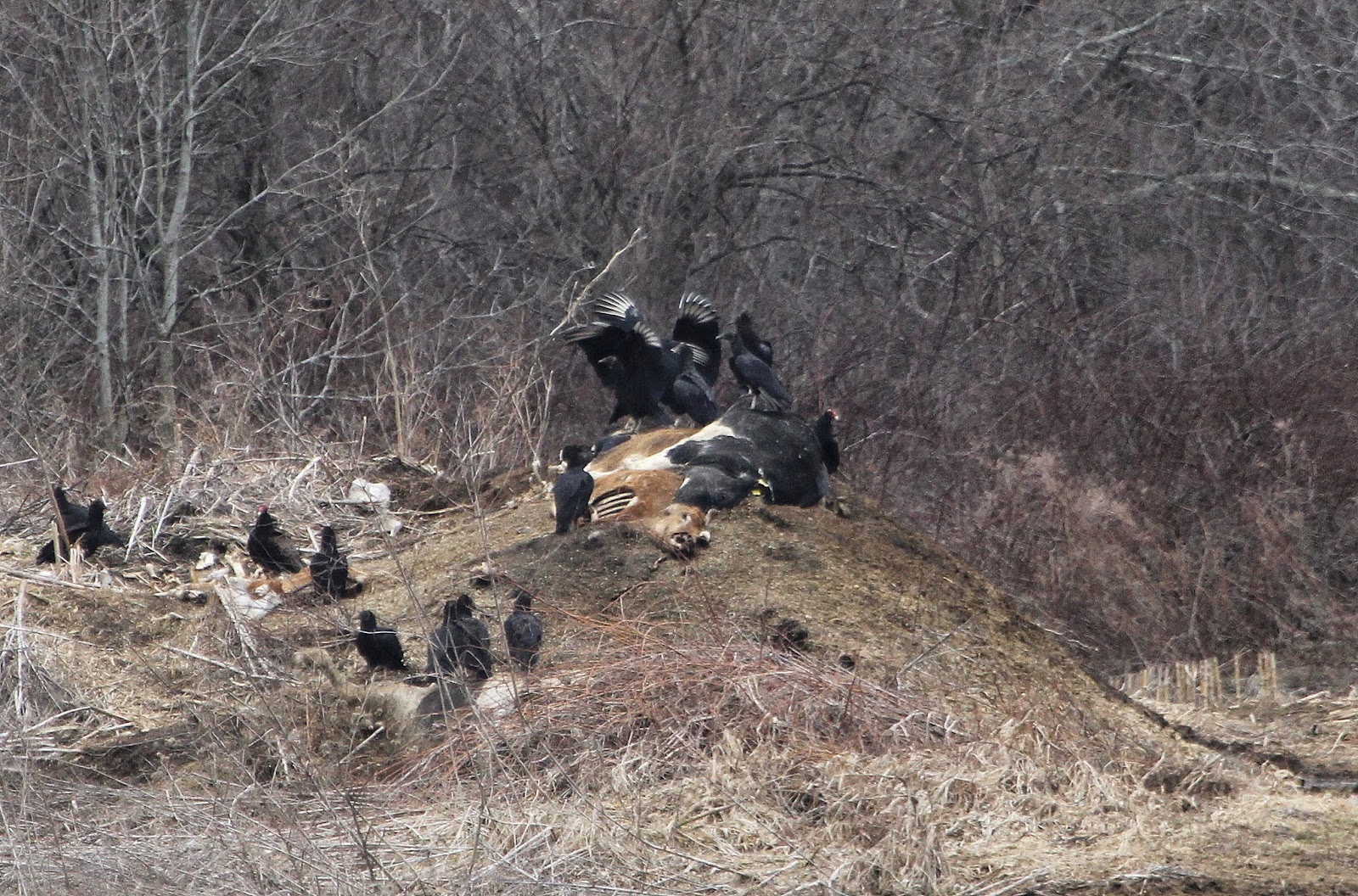 We did also have a few flying around....and while this is a great photo to point out many of the field marks of the Black Vulture, it doesn't quite give the full picture. 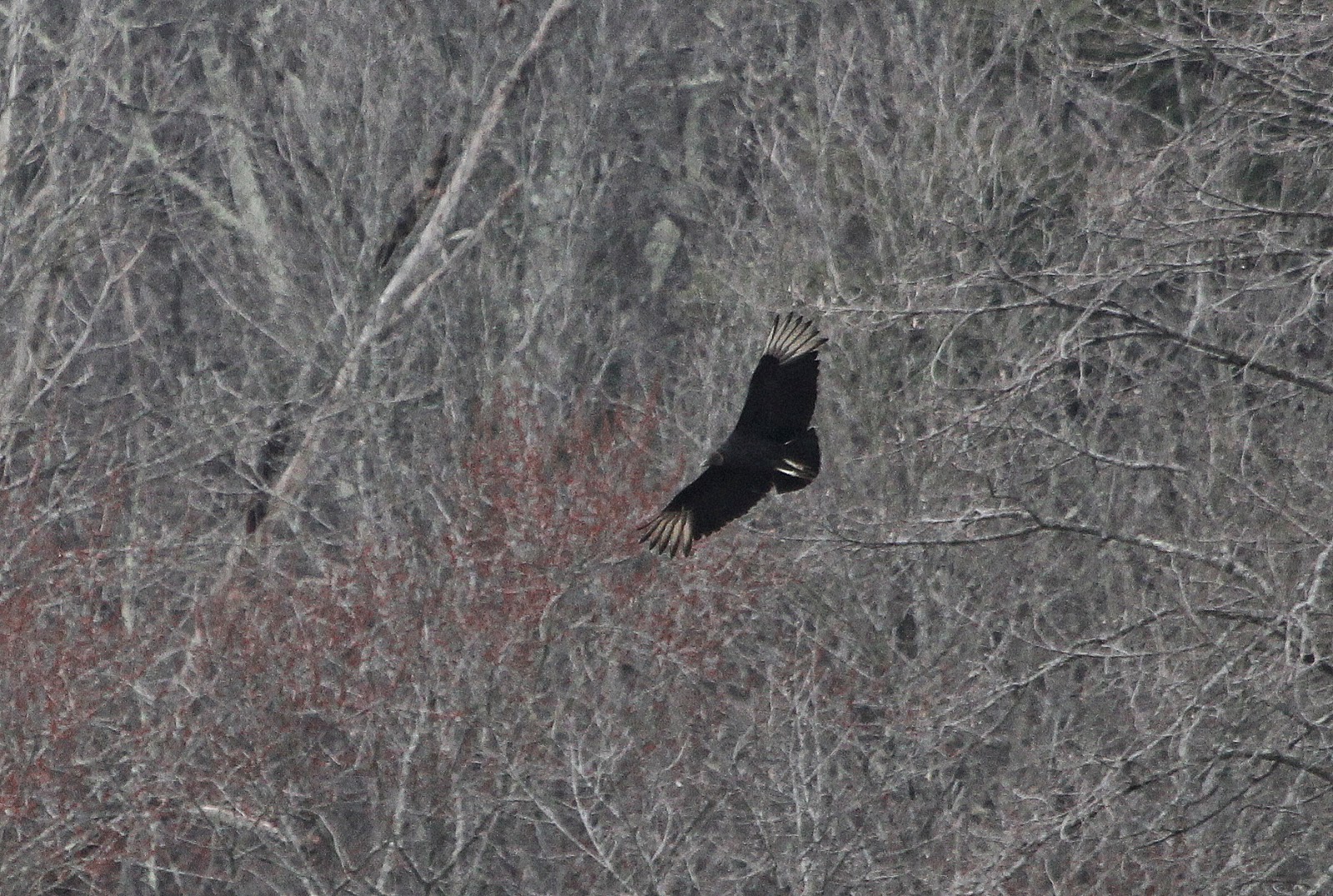 We also had numbers of Black Vultures on the ground among the live cows at the back of the farm.  In fact some of the cows were actually chasing the vultures and causing them to fly up into the trees.  It's like the cows were getting freaked out by having so many vultures just hanging around....really, who wouldn't 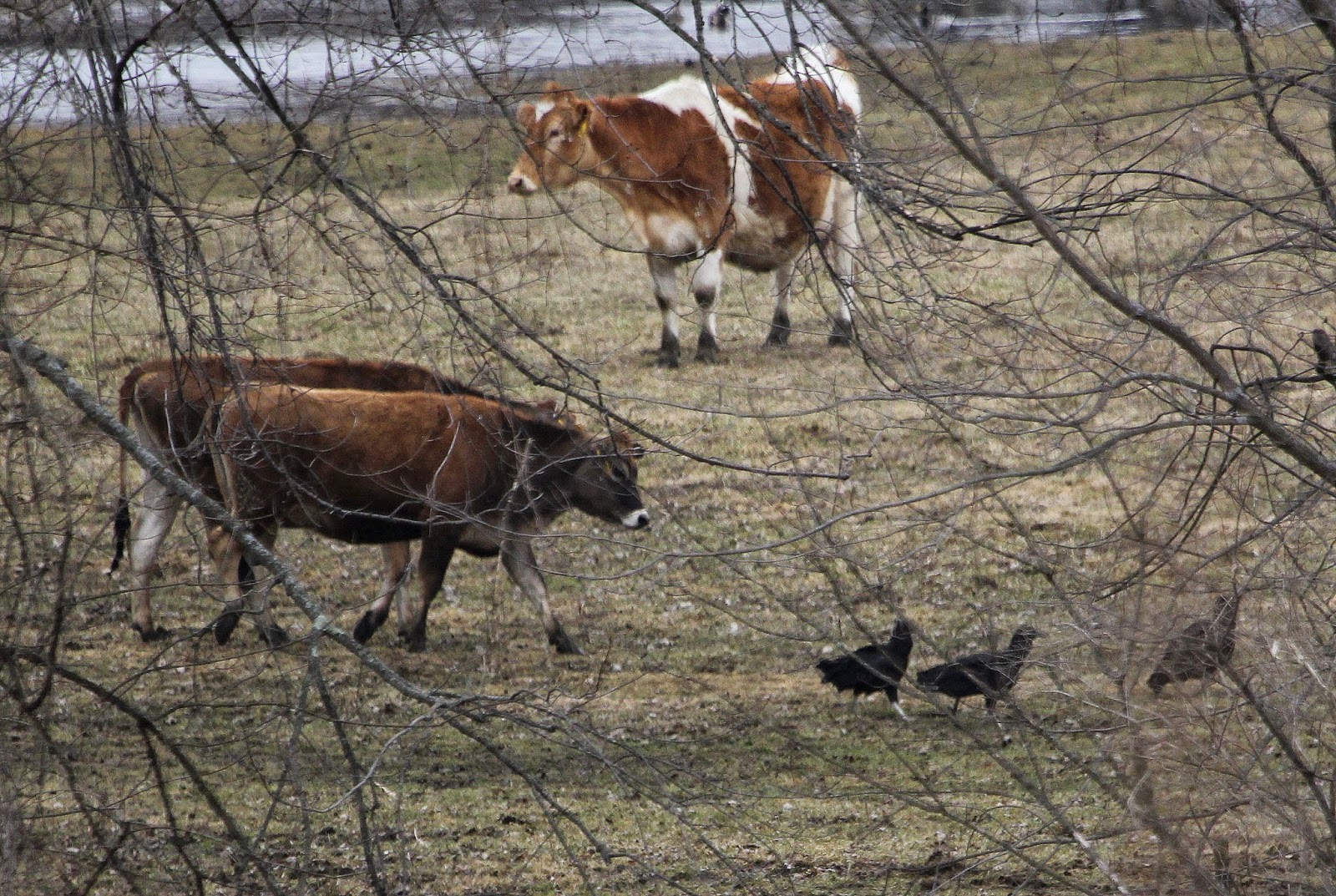 Our final tally of Black Vultures from this one area ended up being 47!  And most were on the grounds with the cows. 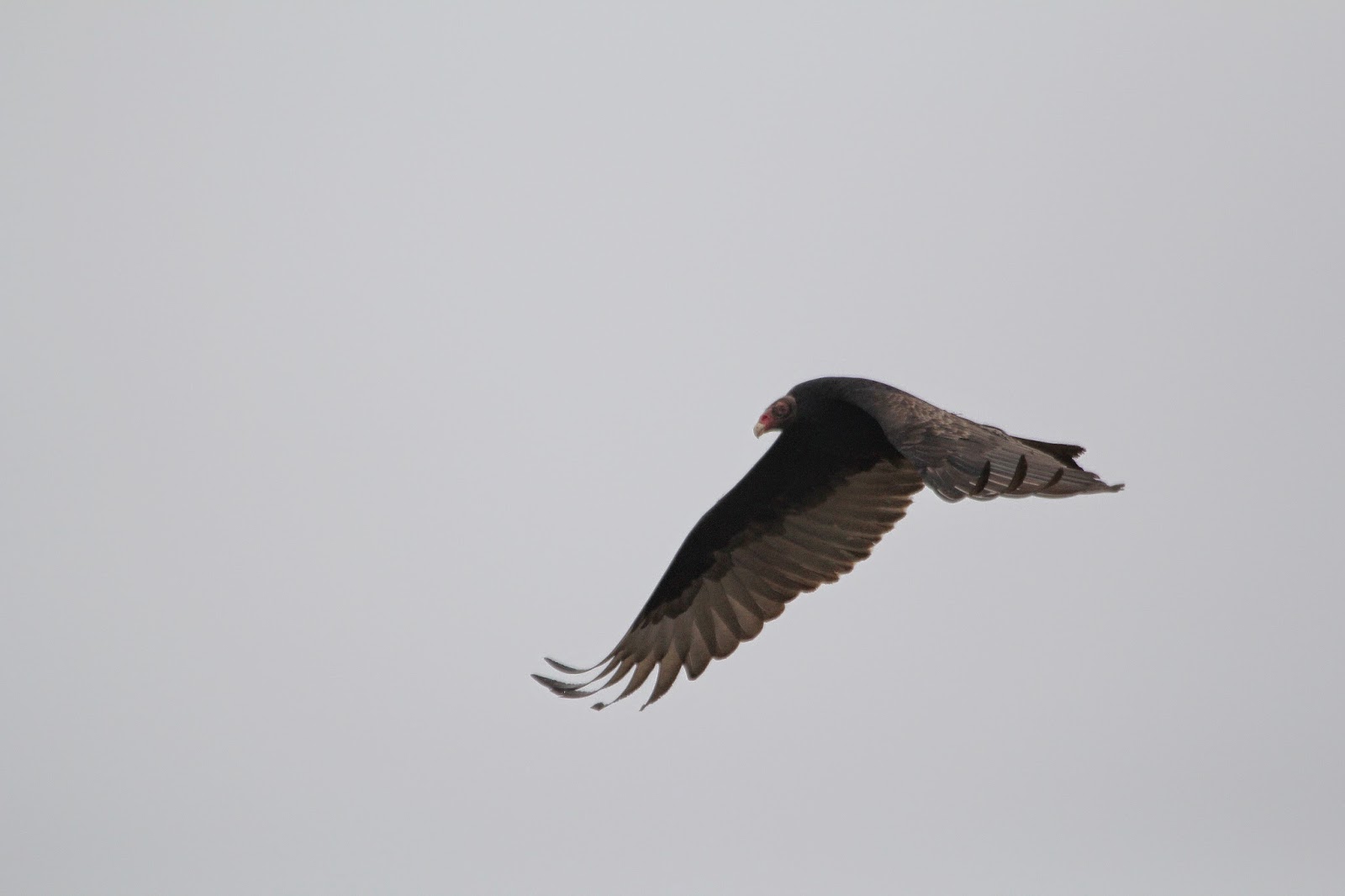 Oh, as I mentioned we did also have a few Turkey Vultures....like the one above. 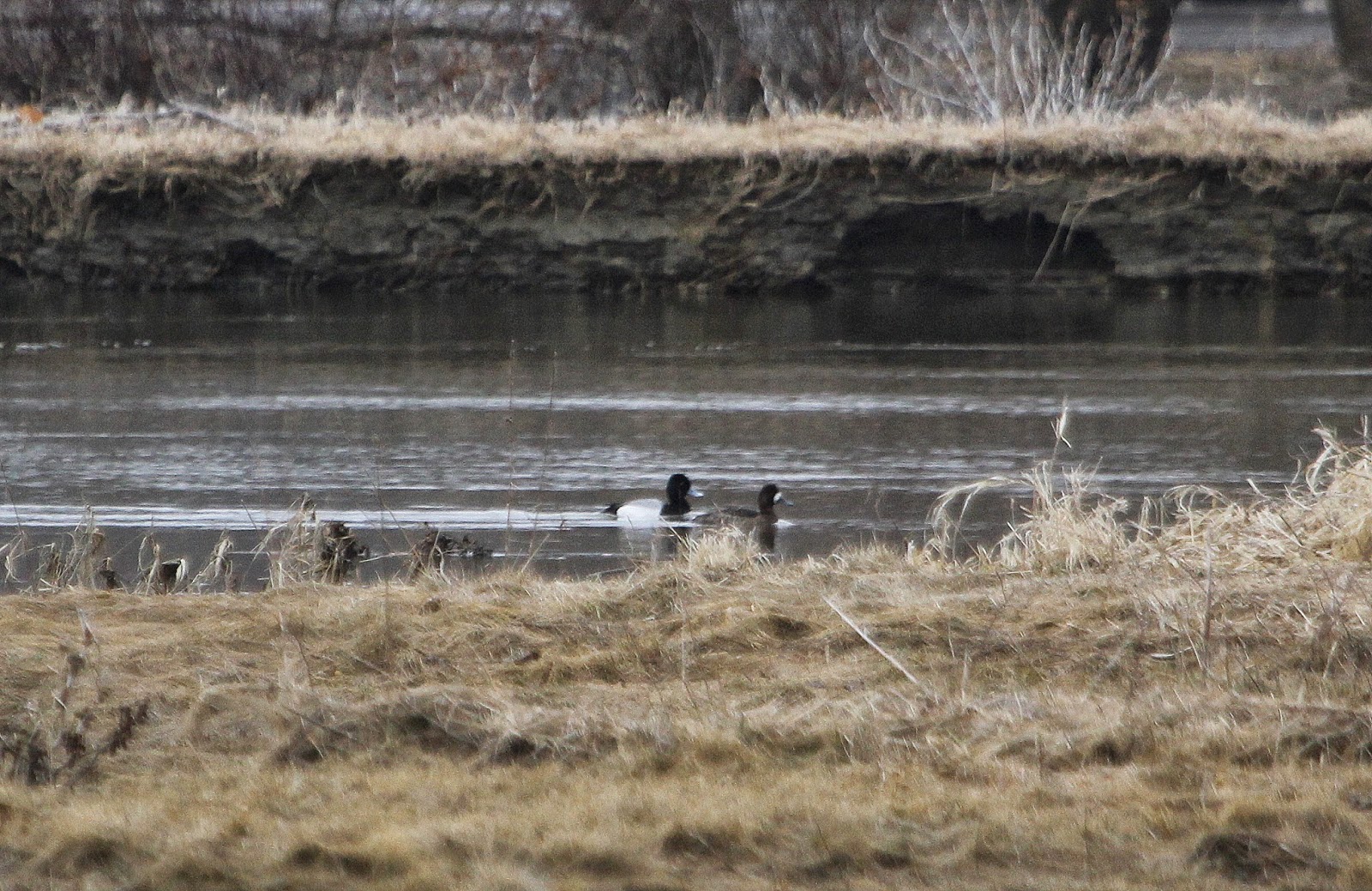 Back at the pull off on Rannapo we had a pair of Lesser Scaup, lots of geese, about 25 Green-winged Teal in the wet areas among the corn stubble and even one lone female Bufflehead. 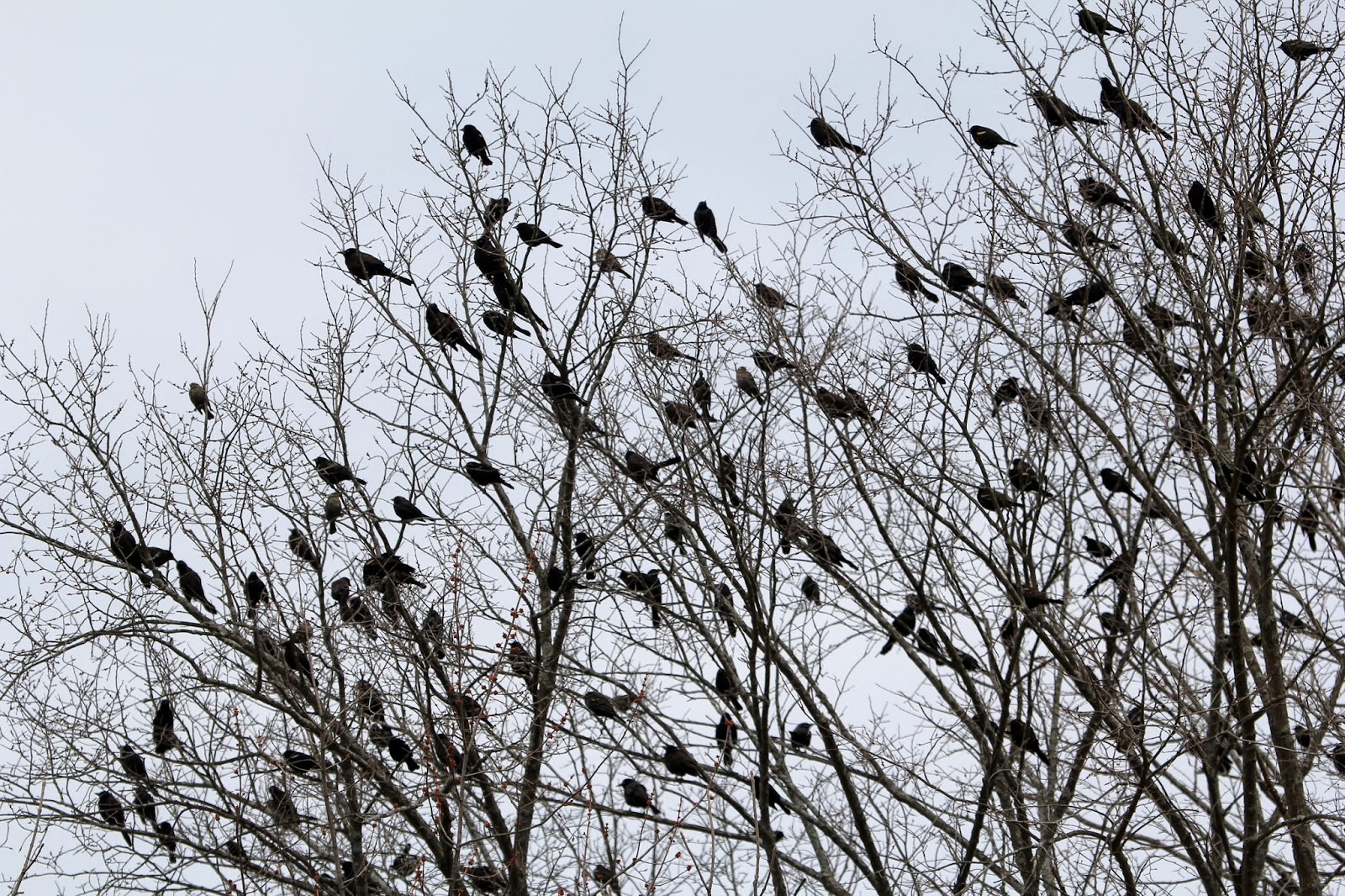 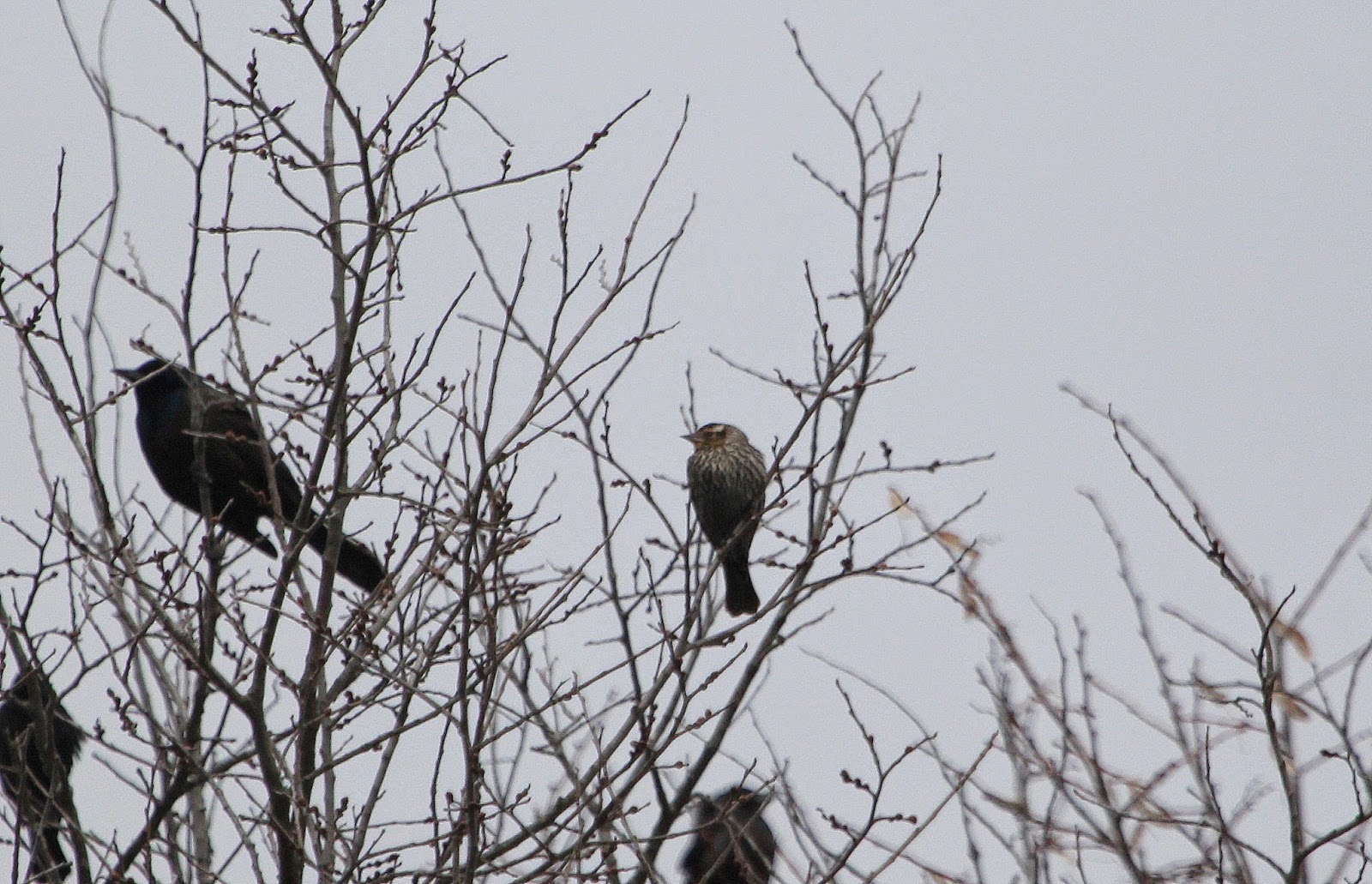 One of the key birds we were hoping to find was the Tundra Swan that had been recently reported.  We got good directions from the folks at the cobble, but unfortunately we struck out again. 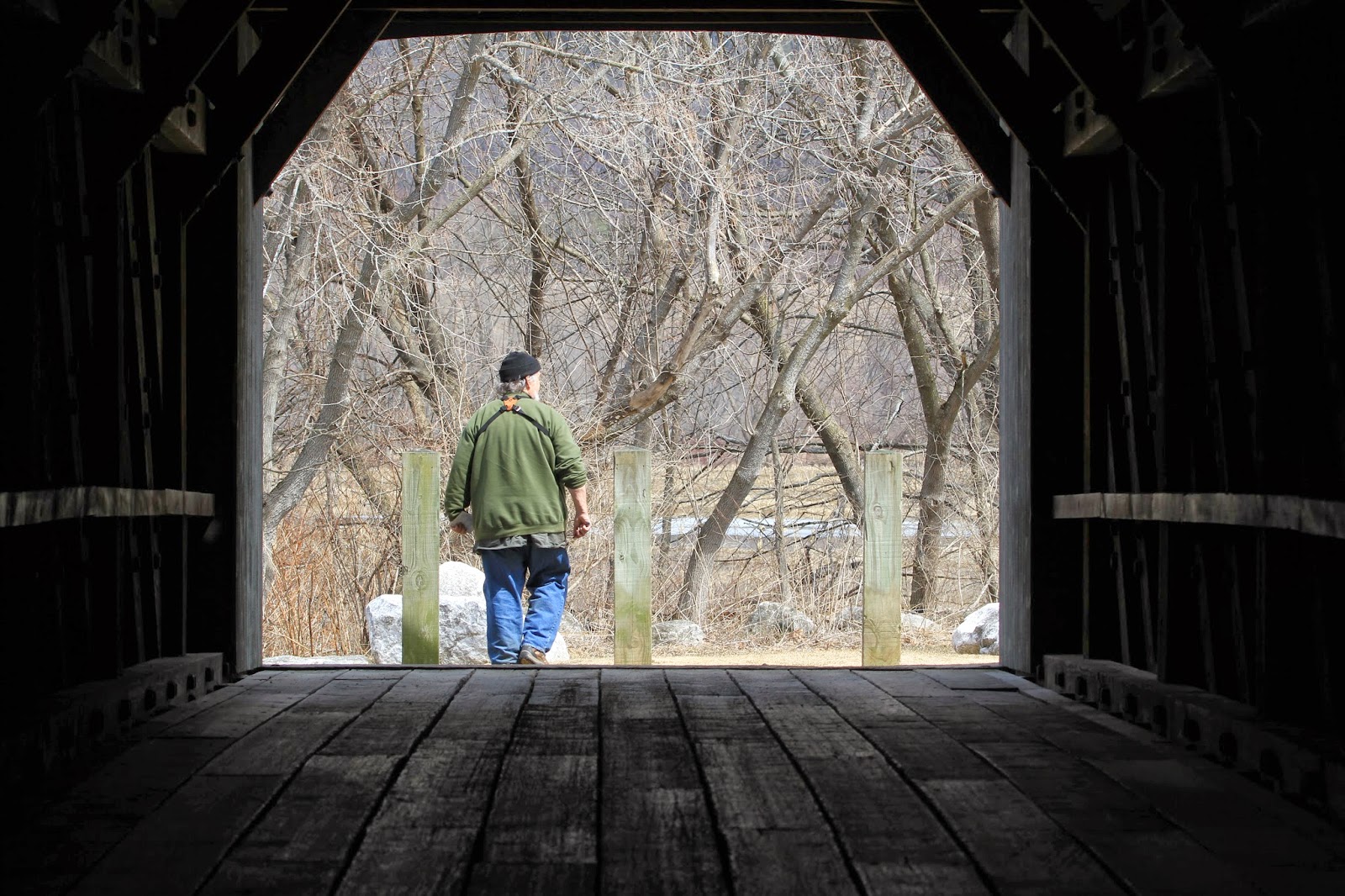 We stopped at the covered bridge in Sheffield to scan the fields and the river, but we didn't have any luck. 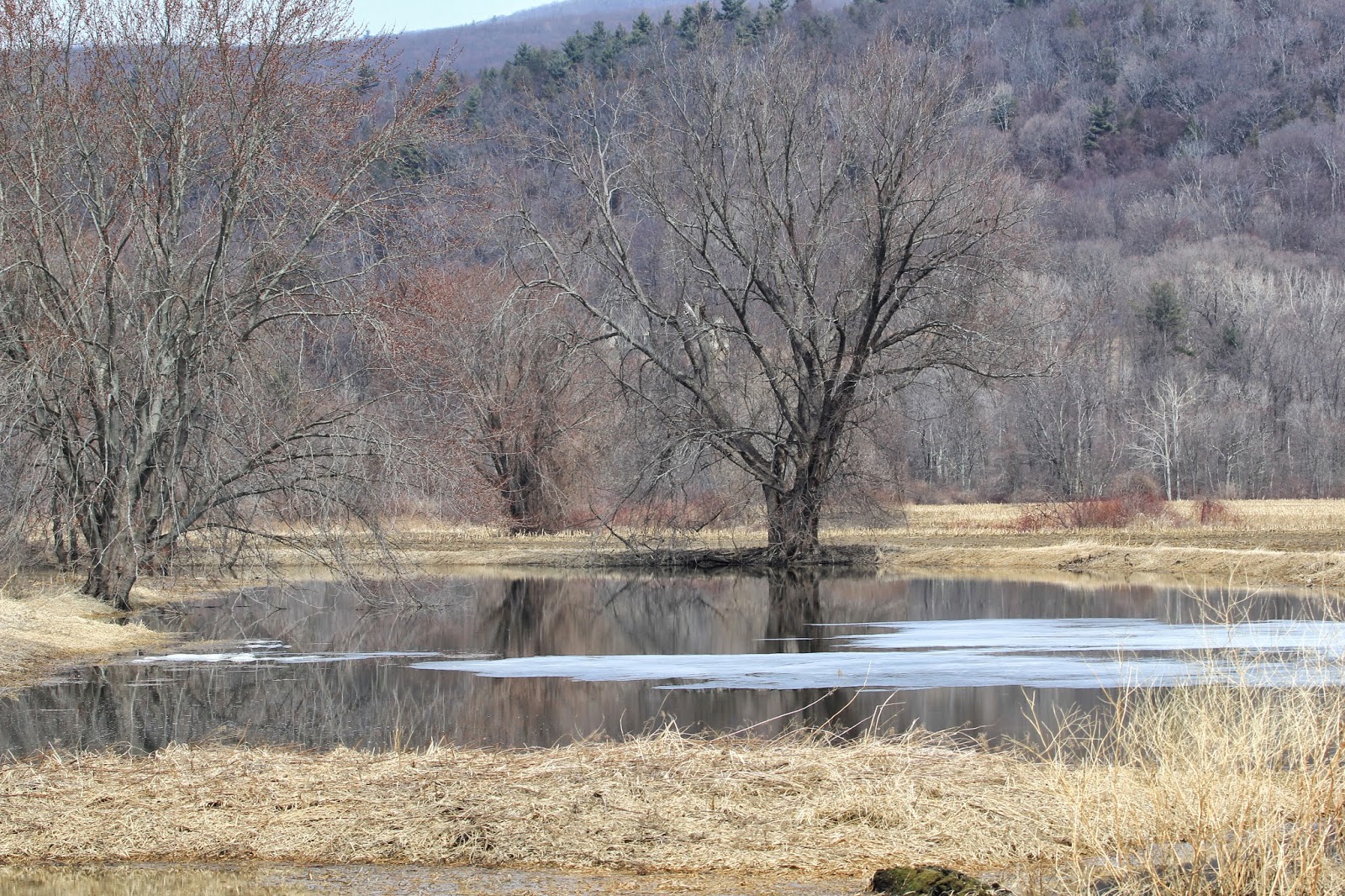 We did have a nice Fox Sparrow working the edge of the dirt road and flying from bush to bush before he took off across the wet field and disappeared. 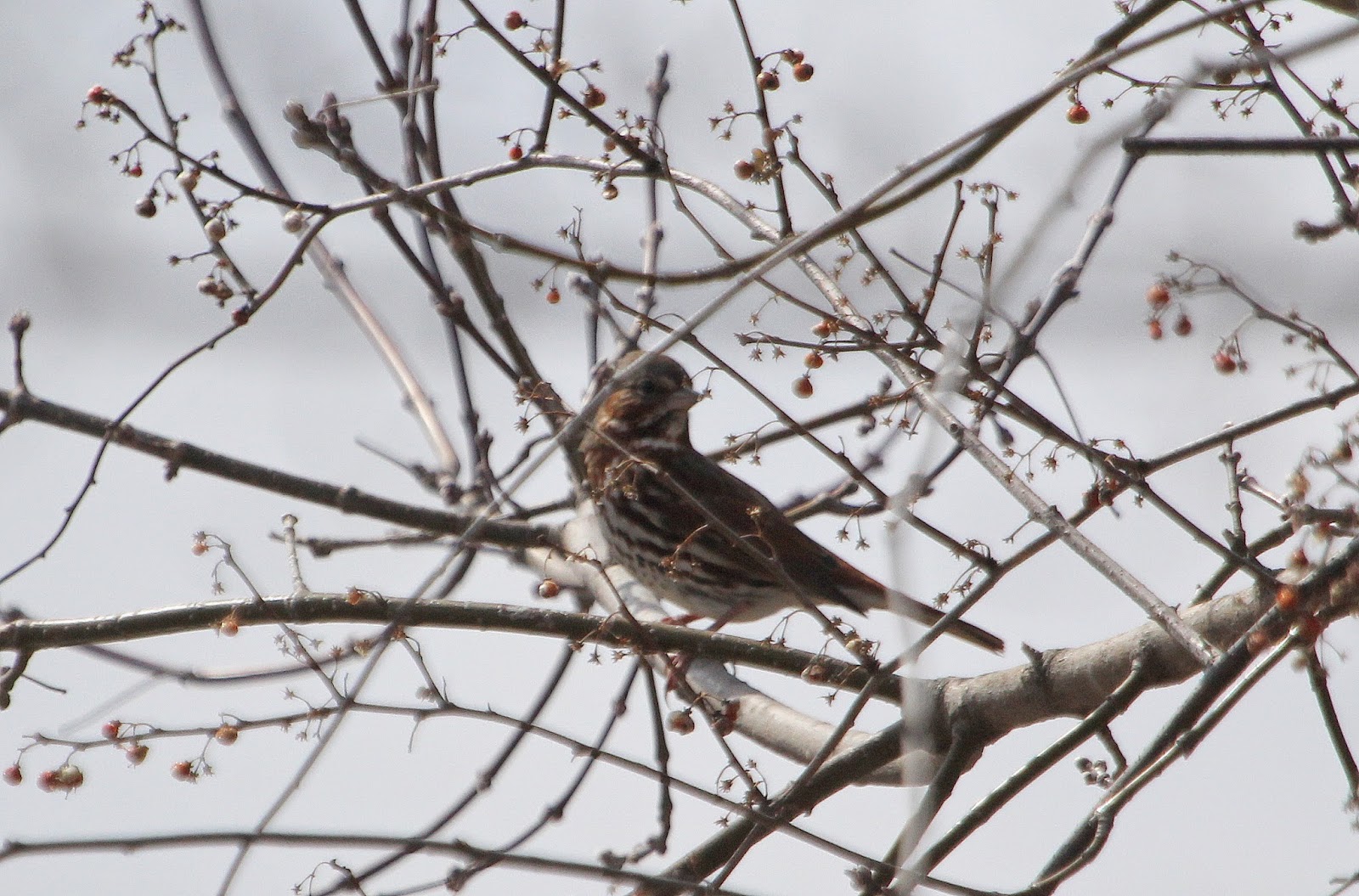 From this point you can often see large numbers of geese in the surrounding farm fields, but they were pretty empty this day.  I really liked this plaque on a large boulder in the parking area at the covered bridge, but I haven't done any research to see what it's actually referring to.... 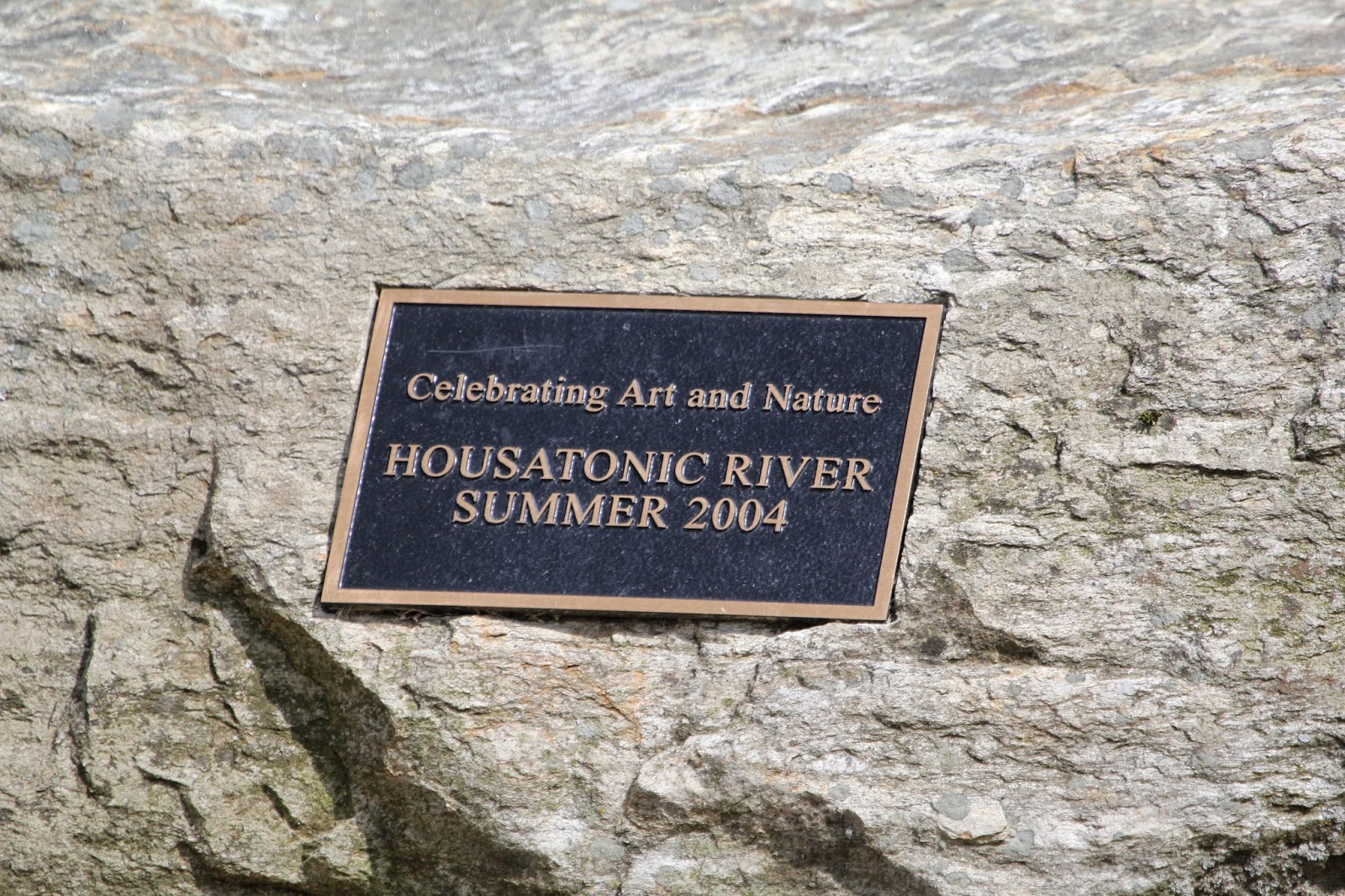 After driving some other back roads around Sheffield and checking out as many geese flocks as we could (and we ended having more than 3,000 geese in all the fields along Hewins Road) we decided the Tundra Swan just wasn't going to put in an appearance for us today.  So we headed over to Egremont for our last stop of the day before heading home on the Pike. 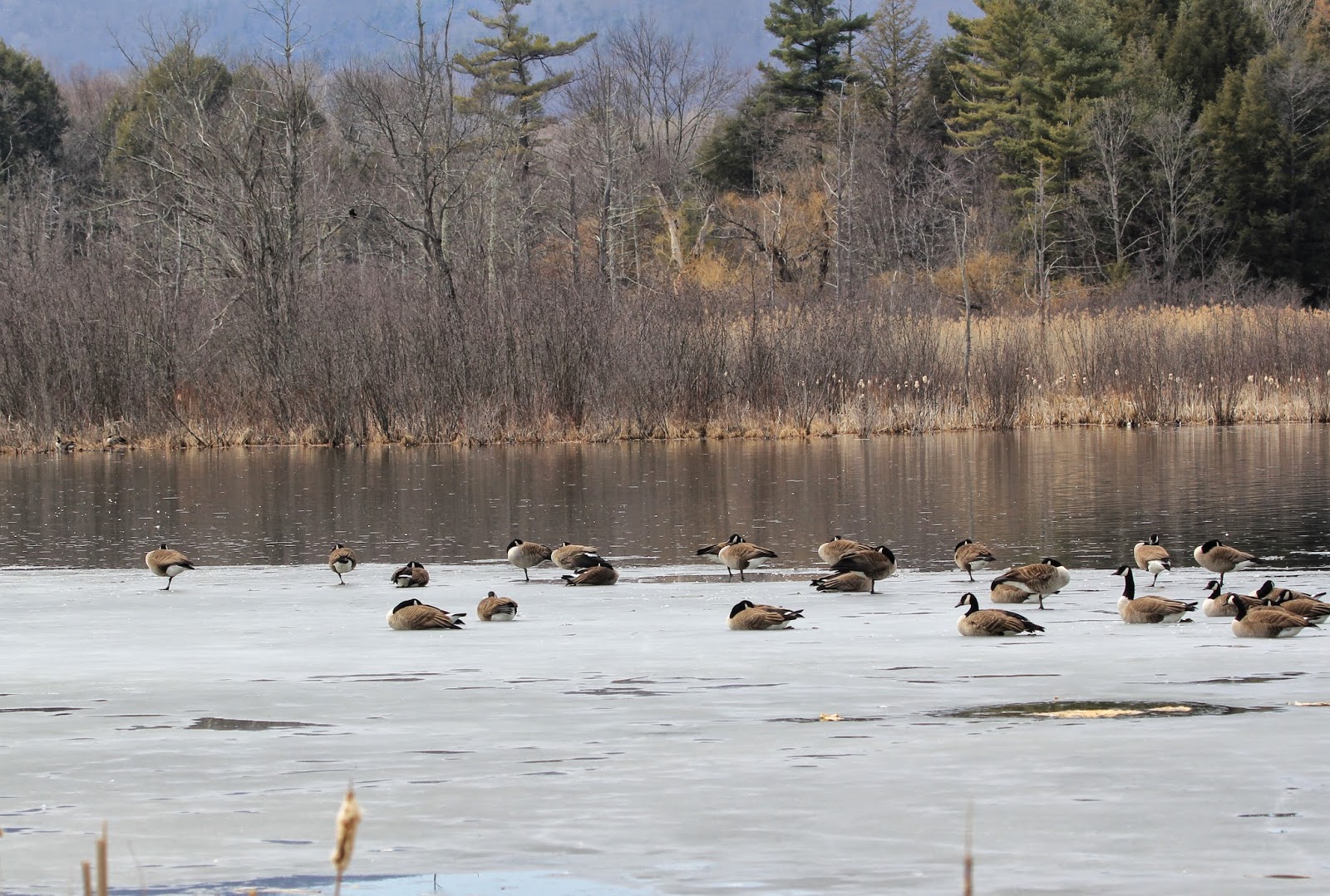 While Mill Pond was still partially frozen, we had good numbers of geese, about 30 Ring-Necked Ducks, 7 Common Mergs and our first Pied-billed Grebe this spring. 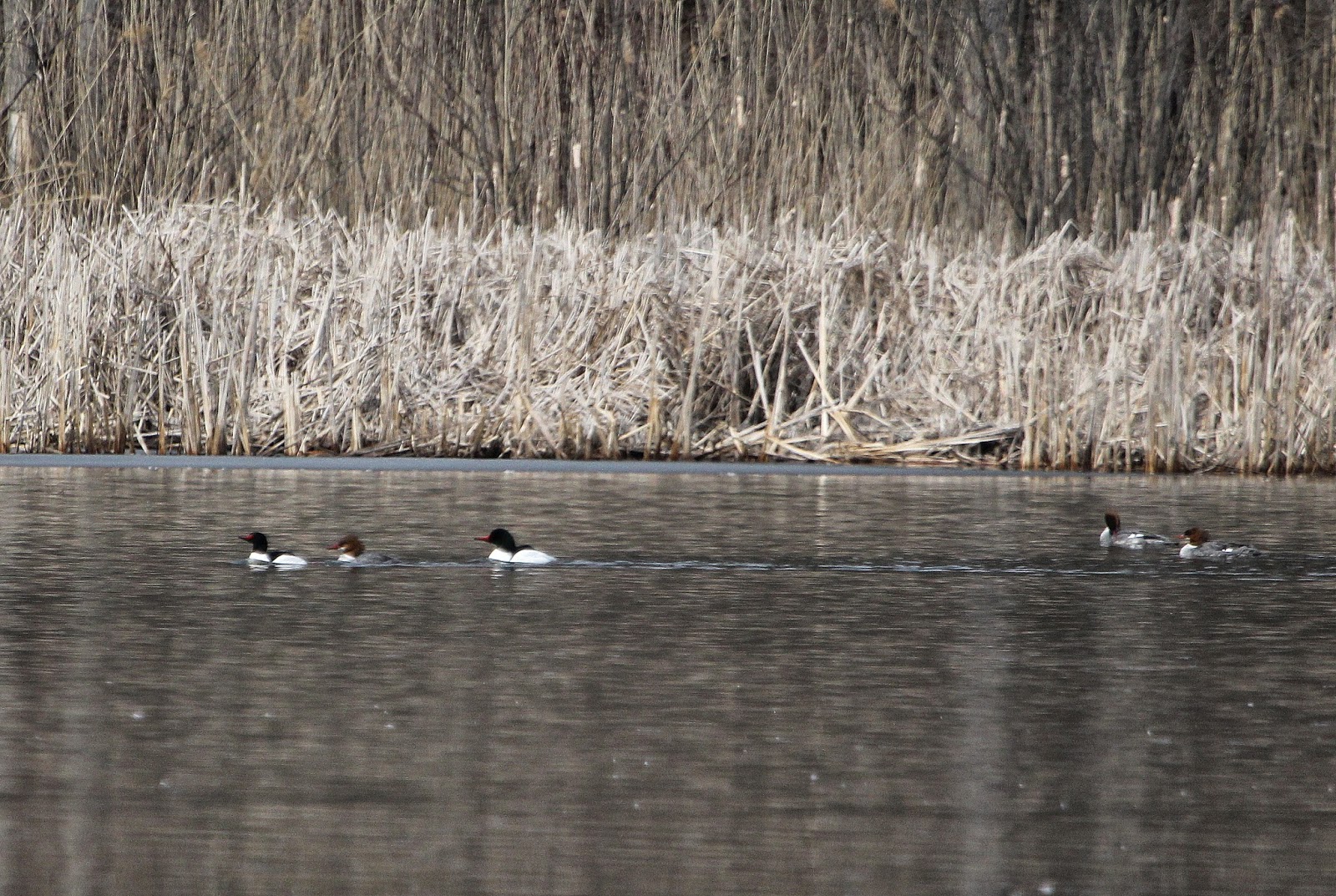 Even though we missed a lot of our "target" birds for the day, we had a great time poking around Sheffield and realizing that as we headed back to Worcester we were actually returning to a little less snow than we had in the Berkshires....now that's a nice change.

After we got home, around dinner time we got a text from our friend Kevin that someone had reported a Greater White-front Goose on Mushopauge Road in Rutland.  We decided to get up early on Thursday and run out to see if we could re-find the bird.  Sure enough this beautiful goose was in the fields with about 50 Canada's. 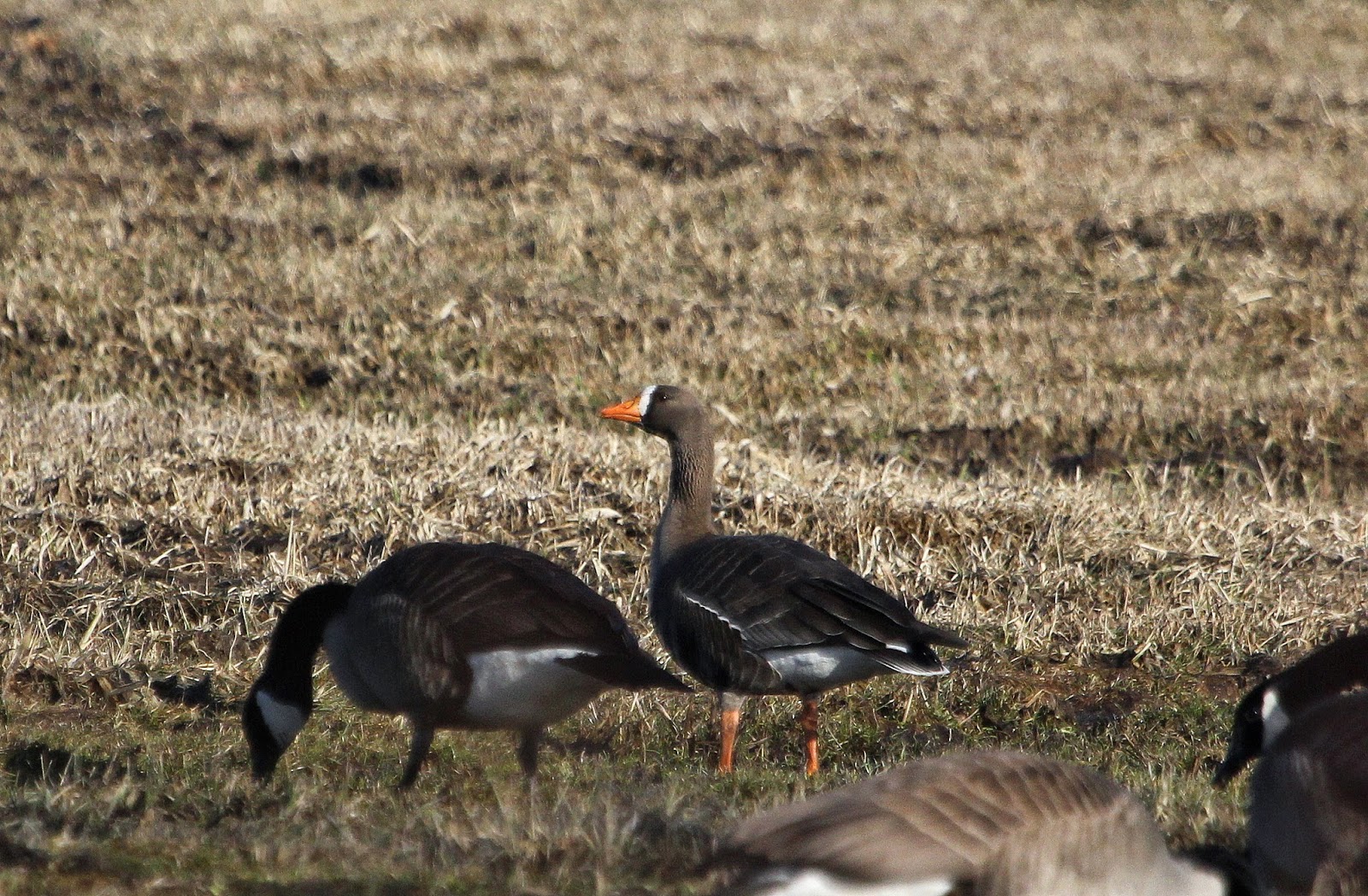 We spent some time studying him and also the shorebirds that were hanging out in the wet spots around the corn stubble.  We had 4 Snipe and 3 Pectoral Sandpipers. 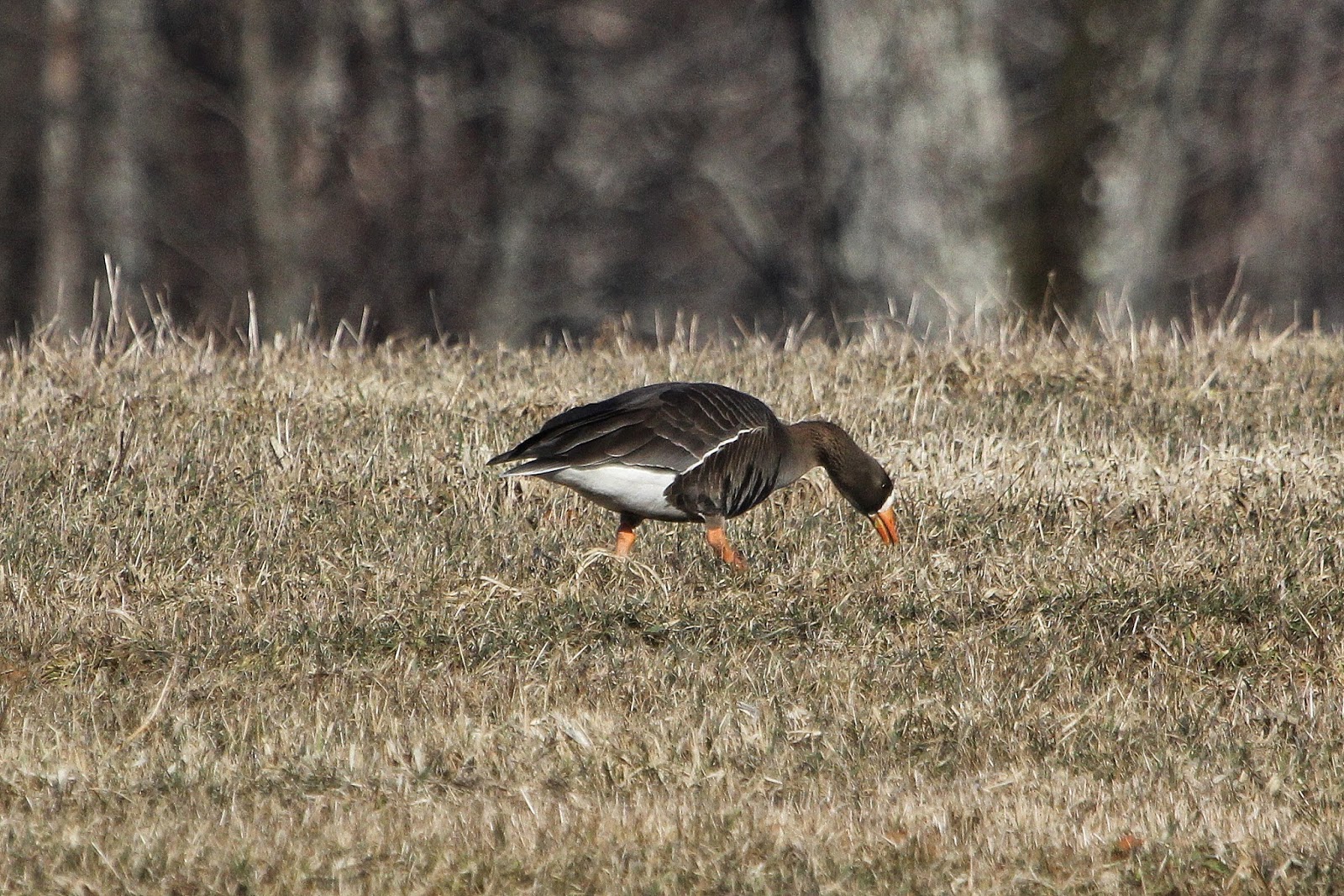 Literally as we pulled into the driveway I got a call from Lisa Hennin who was out in Holden looking at a female Barrow's Goldeneye in Chaffin Pond.  So we turned around and headed out there as well. 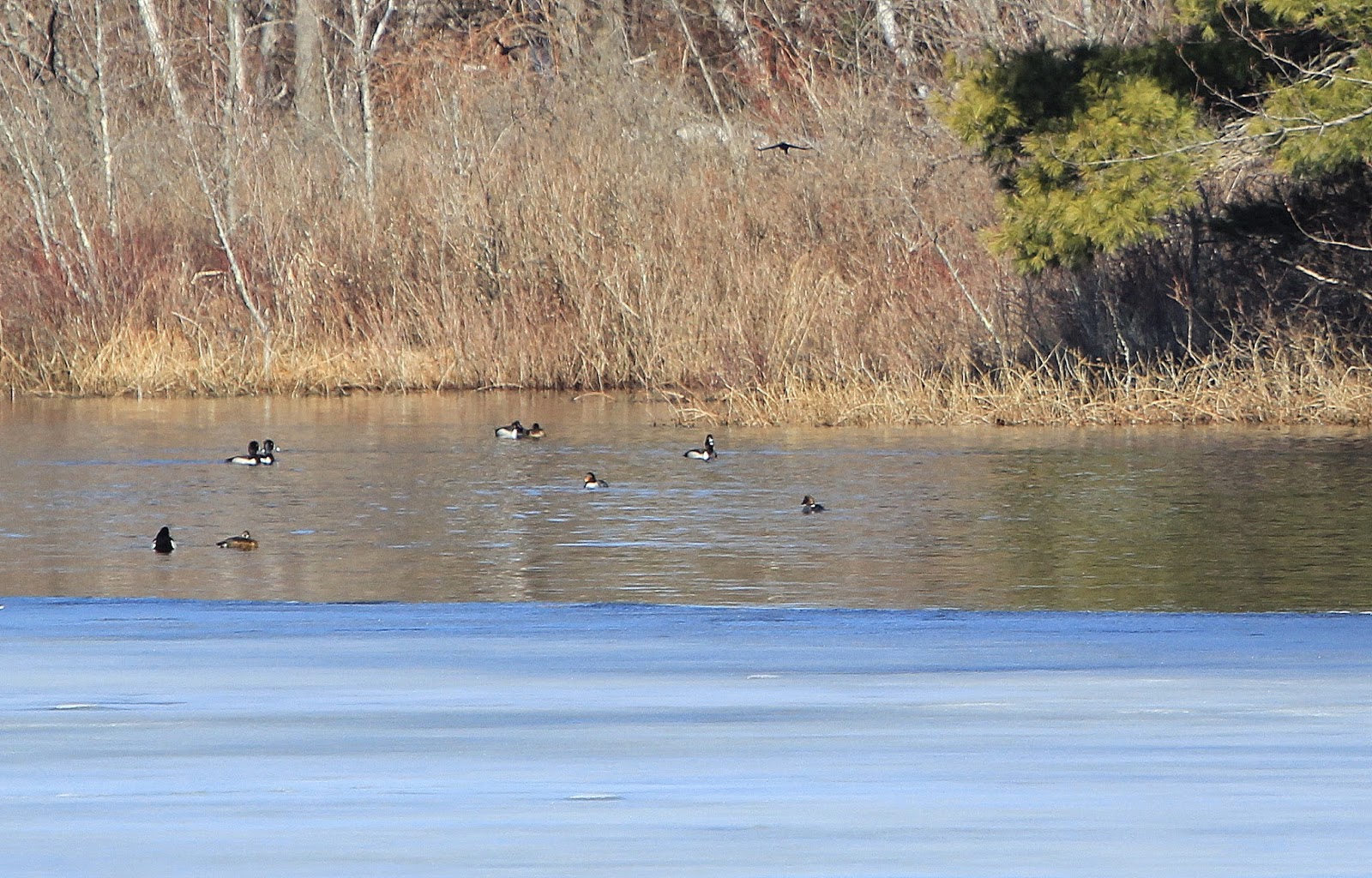 Sometimes there are great things right in your own backyard!

Posted by Sheila Carroll at 7:54 PM